Women displaced under the Corona crisis 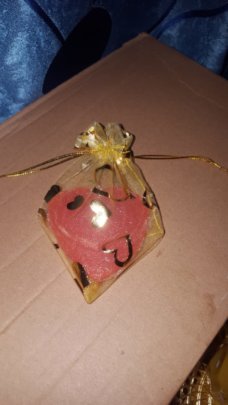 Women displaced under the Corona crisis
A team from the project contacted some of the displaced women who were trained and supported by the project, to see their conditions, and their home projects to produce perfumes, incense, women's bags, accessories, etc.
In Yemen, the outbreak of the Corona virus began recently last May, and due to the bad conditions that Yemen is experiencing as a result of the war and the conflict that has been going on for six years, the health conditions are very poor, which was reflected negatively on the economic and social conditions
The team contacted some of the trainees, who complain that a large part of their projects were suspended during this month due to the precautionary measures and the quarantine to confront the Corona virus.
Trainee Ubaida sold her last product last May, and sent us some pictures of it through the WhatsApp program, but she stopped production this month, and she adheres to the home quarantine.
Obaida said that she had achieved good success during the past months, and her own project provided her with a source of income for her family, and she was selling all of her products of perfumes and incense, but she stopped now and lived in bad conditions
As for the displaced "Reham", the team contacted her on the mobile, because she returned to her previous village in Al-Hodeidah Governorate two months ago, and she left the capital, Sanaa, due to the Corona virus. Reham was a participant in the marketing and promotional program for the products of the displaced women, which the project established in November and December 2019, and continued After him producing incense, perfumes and cosmetics, Reham said that she was facing difficulties in marketing her products in Sanaa, and that her latest products took her with her to her village in Hodeidah to sell them there.
Trainee Azhar visited the team in Sana'a, Azhar was working in a shop that sells women's accessories in one of the major malls in Sanaa, and was displaying her products from household bags and accessories in that store, but the authorities in Sanaa issued a decision to close the commercial malls in Sanaa since the end of last May (As part of the precautionary measures to confront Corona), therefore, it stopped production and sale, and suffers from very poor conditions
Through the meetings and contacts that the team held with the trainees, their home projects are threatened with bankruptcy and stopping permanently. Many of the displaced who were trained and supported spent a large part of the product sales during this month, and they were unable to purchase new raw materials and manufacture new products due to the Corona crisis, and they needed Necessary to provide additional support, so that they can return to production and marketing after the end of the Corona crisis
We invite supporters and donors to respond to the displaced women and provide support and funding to them in this dangerous stage and the difficult conditions faced by the displaced women in Yemen.

The first batch of the project has been successful

The Prime Minister on a visit to the exhibition

Eight weeks is the fourth stage (marketing and promoting the products of displaced families). The organization participated in the weekly market for productive families in Sana'a during the period from November 2019 to January 2020 Every Thursday, the organization hired a commercial pavilion at the exhibition, and female interns from the displaced participated in displaying products that were made in their homes, women bags, perfumes, incense, cosmetics and accessories, all were good, sales were encouraging, and the marketing exhibition visited many senior Officials and government officials admired the products of the displaced women. One of the ministers bought samples of most of the products made by the displaced women. The organization supervised marketing, and encouraged female trainees to purchase new raw materials so that production could continue, and the small projects supported by the project would be developed. We still have 280 displaced families in need of training and support, but the project did not receive new donations in the last campaign that was held last December, and the organization is trying to continue to search for new support and funding, and the project was registered in the 2020 campaign for the girls ’funding campaign, which was accepted, The campaign will start on March 6 and last for a week. We hope that the project will receive new funding so that it can train, rehabilitate and support more displaced women 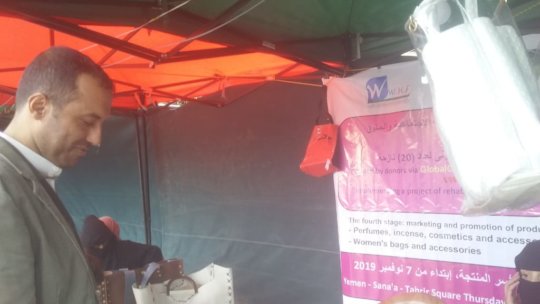 The head of the Accounting Control Authority in Ye
Nov 7, 2019

Inauguration of the fourth phase: promotion and m 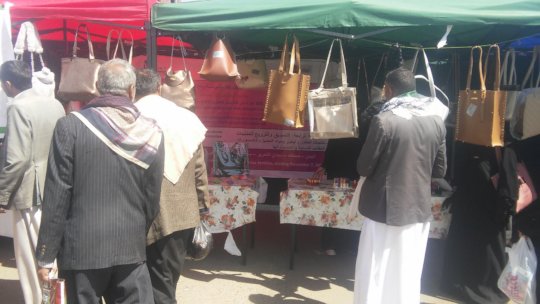 Turnout is good on the ward of displaced families

Our plan was to start the fourth phase (marketing and promotion) in December 2019, but a charity in Yemen set up a weekly charity market for productive families, in the most important fields in the capital Sana'a, a good opportunity that had to be exploited, especially since there is a large turnout In this charity market.

As of Thursday, November 7, we opened the wing of the training and rehabilitation project for displaced women in Yemen on work and production (the first batch of 20 displaced women) and presented what was produced during the second phase: the training phase "women's bags, accessories, perfumes, incense and cosmetics"

The start was good and encouraging, the citizens who visited the charity market were impressed with the project wing and the products made by displaced women, there was a good turnout, sales were good, and the media attended.

Today is the beginning of the fruit harvest of an eight-month preparation and work effort. 20 IDP families in Yemen have become productive families, contributing to local development, and providing their children with the basic needs of their efforts and work 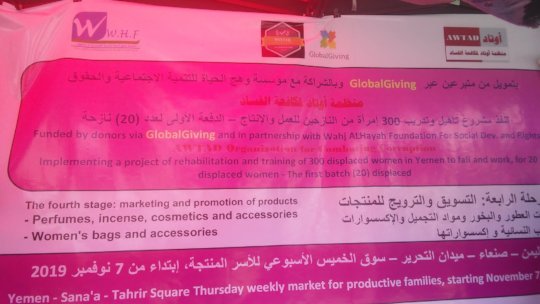 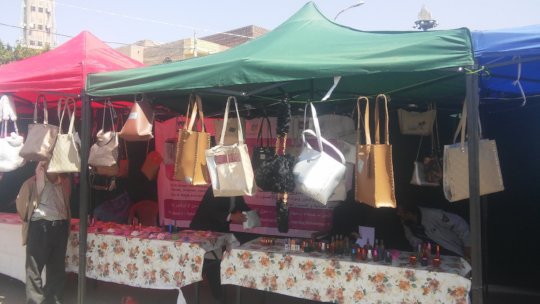 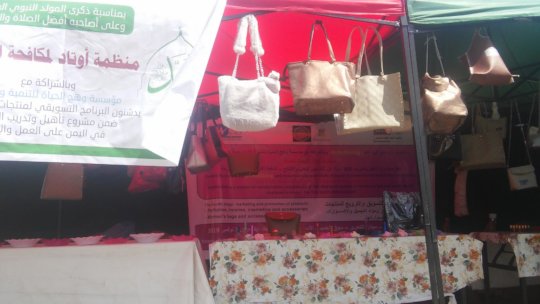 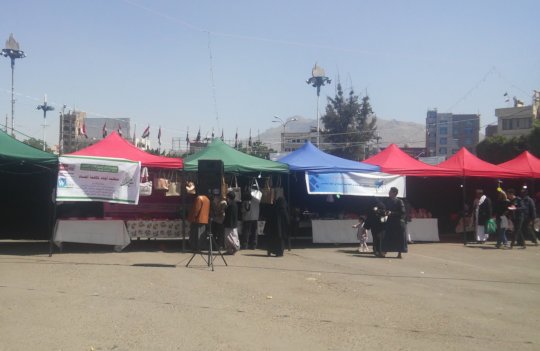 Thursday market for productive families in Sana'a
1 2 ›
WARNING: Javascript is currently disabled or is not available in your browser. GlobalGiving makes extensive use of Javascript and will not function properly with Javascript disabled. Please enable Javascript and refresh this page.