An innovative book for deaf children 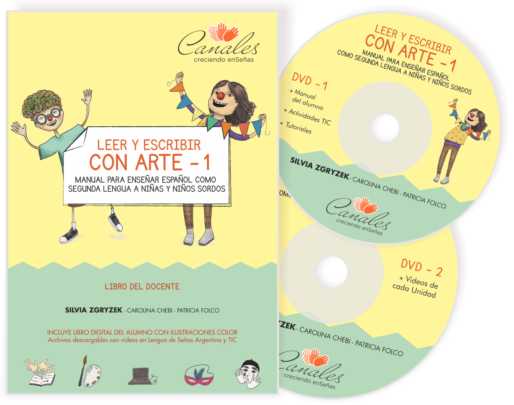 Introducing "Reading and Writing with Art - 1". An innovative book for teachers of the deaf and for deaf children

This new educational material has been developed for over 5 years by an interdisciplinary group led by Prof. Silvia Zgryzek, a teacher of deaf children that participates in the Canales’ team. Silvia began to devise the manual  in 2012, but the project took shape in October 2015. In her words: "I have the feeling of having cooked it slowly and today we can serve it, share it".

"Reading and Writing with Art -1" aims to accompany teachers in the process of teaching Spanish as a second language to deaf children. The teaching method focusses on Argentine Sign Language (LSA) as the first language of deaf children and it does so through artistic expression, one of which is literatura in sign language.

The director of one of the most important schools of deaf in Argentina expressed: "For us as a school and as teachers is an unprecedented proposal. Finally a school textbook for deaf students! This perspective of what is called curricular justice involves weaving among all networks that favor meaningful teaching proposals for all, to help all our deaf students.

While the path to literacy is a "central challenge for any act of education" - it must be borne in mind that "for over a hundred years we were formed into a medical-therapeutic paradigm in which to teach our students how to speak was the most important objective. When this did not happen, failure, in general, was attributed to the students.  The manual comes today to give light to new didactic methods in the process of teaching reading and writing. Among the strategies that are proposed to access the written language, are the videobooks developed by Canales and that thousands of deaf children enjoy today on the videolibros.org web page.

In Canales we work as a team, sharing experiences, and we try to reflect that in this new material that has the original illustrations of Carolina Chebi and that consists of a paper book for teachers, a downloadable digital manual for students, videos In LSA that were coordinated by Nadia Cordovani - a deaf person - and ICT activities developed by Patricia Folco. 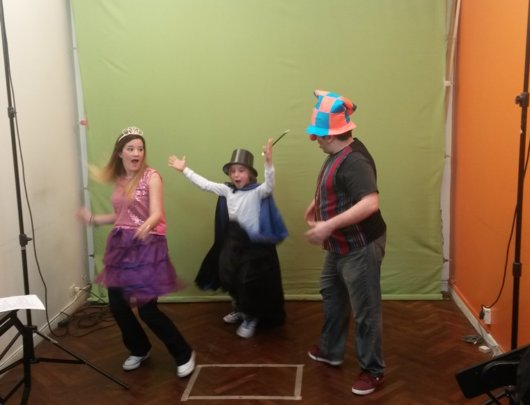 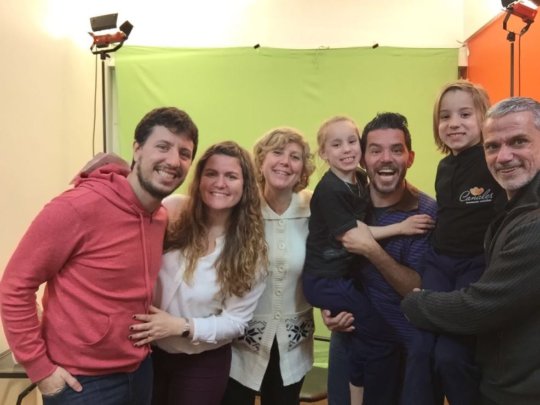 Deaf and hearing working together 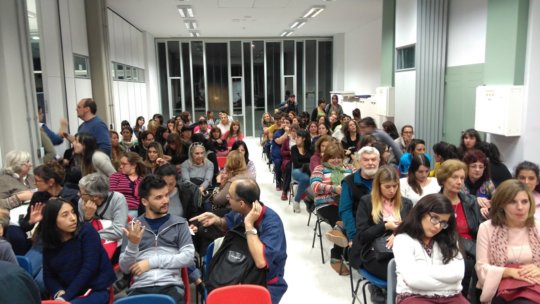 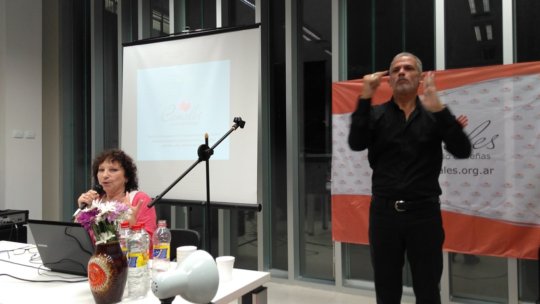 The author explains how to use the book 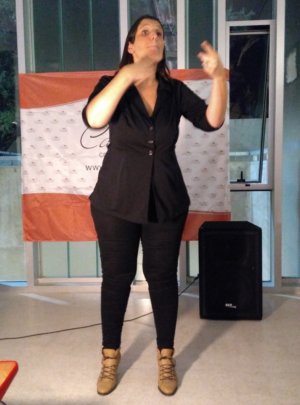 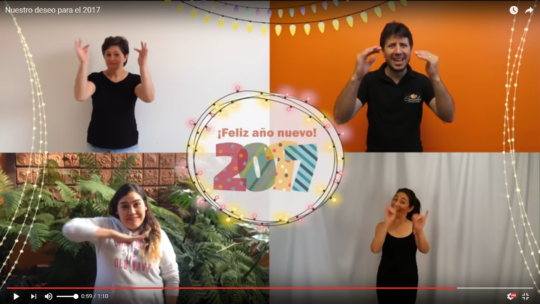 To increase the impact of our literature promotion project, Videolibros (Videobooks) is in the process of expansion to other countries. Since each country has its own sign language, it is not possible for deaf children in different countries to share reading books in sign language.

We have then started an internationalization path of the Videobook page. In this first stage, we include Spanish speaking countries, taking advantage of the fact that the text of the books is in the same language (Spanish) for all.

One of the joint actions we did with other countries to kick-start this project is a “New Year’s video” in four different sign languages available here: http://bit.ly/Deseo2017LS

The video includes a good wish for this New Year and a message to spread the right of Deaf children to access a bilingual and quality education. The wish is expressed in different sign languages, thus becoming aware of the fact that these languages are not universal as most people believe.

For the Videolibros project, we will use the same books that have already been published in Argentine sign language and are available on the www.videolibros.org page. We will only modify the reader and voice-over (which will be a deaf person and a hearing person from the corresponding country).

To this end, we have traveled to Uruguay and Paraguay, countries bordering Argentina to begin the process that has several stages:

1 - Training of local teams of deaf people and sign language interpreters in the development of book reading in sign language and filming.

2 - Practices and filming of local teams. Filmed videos are sent to the Argentine team to be evaluated and adjusted if necessary.

3 - Approval of the videos and recording the voices off

4 - Edition of the videos in the sign language of each country.

We are redesigning the page to include the possibility of selecting the books in the different sign languages by clicking on the flag of each country.

Our idea is to make Videobooks an opportunity to enter children's literature for all deaf children in the world! 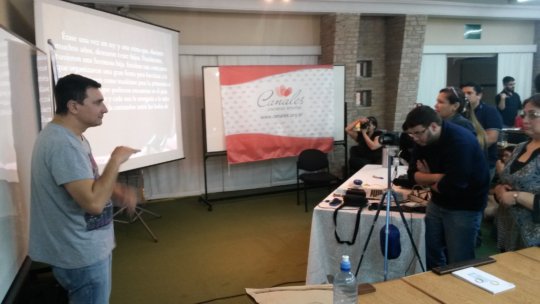 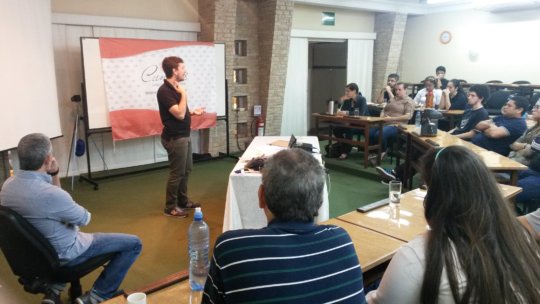 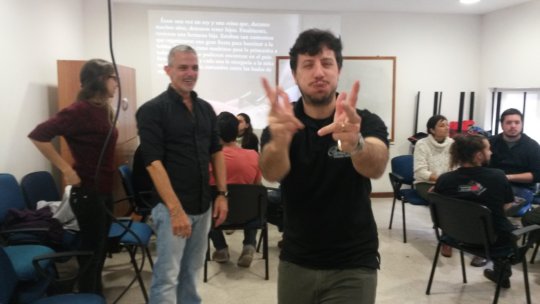 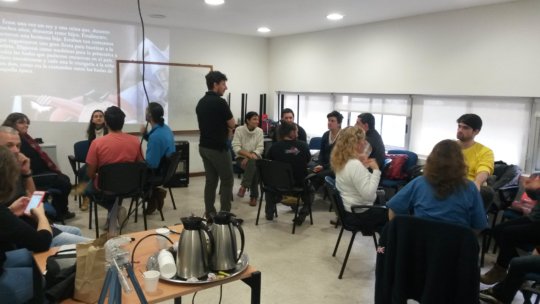 Uruguay.teaching the process of translation 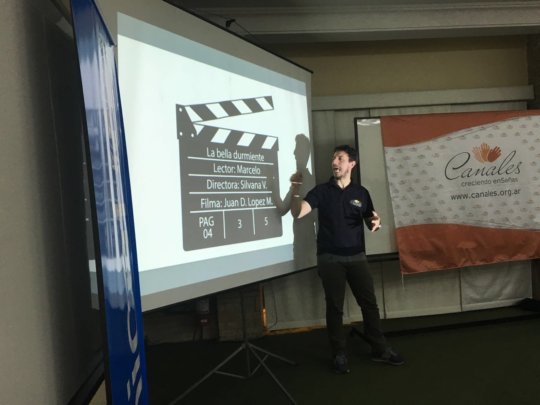 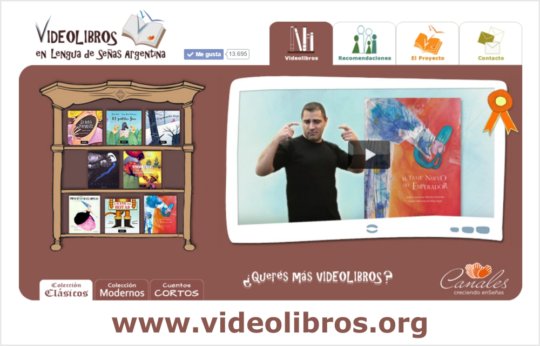 Good news for lovers of children's literature. We included four new titles to the library of classic stories and four more are in the process of editing.

The stories that are already being enjoyed by the children are: The Twelve Dancing Princesses, Bluebeard, The Emperor's new clothes and Epaminondas.

Today we are going to tell you how the selection of the readers  was made of each one of the videobooks.

In the first place the selection is made taking into account the readers’ fluency in sign language: the best readers in sign language are those who have deaf families: they were born to deaf parents or have deaf brothers and/or sisters. This population represents only 5% of the deaf community, and they are those who could communicate from their earliest childhood in their homes and those who their parents and / or grandparents could tell them stories.

Readers are also selected in order to maintain a balance between men and women and their different ages, but what they all have in common is a high level of sign language and their commitment to education and access to culture and reading for deaf children. The coordinators of this project are deaf themselves and are responsible for meeting these requirements.

We also take into account the content of each book and then, we choose readers who can better represent the characters. For Bluebeard and for The Emperor's new clothes we selected adult male readers. It was interesting to work on the reading of a song in one of the stories The deaf reader solved the situation by moving the body and by moving his hands: we invite you to see this part of the videobook at 8:25 min (Videobook: The Emperor's new clothes).

Epaminondas and his godmother tells about a child who is always mistaken. It's a funny story for small children and that is why we decided to call a young deaf girl who is in high school today but who started reading videobooks when she was 9 years old. In that first stage, Melany was the reader of Gastón Ratón and gastoncito and of Federico.

Melany already at 7 years of age had participated in one of our first educational sign language videos “The rights are in your hands”. A sample of this video can be seen here. This young deaf lady was one of the actresses and represented a deaf student who did not understand what the teacher told her orally and so she could not participate in a walk with her classmates.

She also participated most recently in an environmental awareness project.

Lucia is another of our readers who has already participated in other projects and also in reading videobooks for teenagers.

The selection of voices in Spanish also represents another challenge, since the person that we select must have some kind of relation with the looks and the age of the reader and with the way he/she reads the book in sign language. That is why for Epaminondas we selected a young woman with a very delicate voice and for the other videobooks we selected young adults. We try to include a balanced kind of stories: comic stories, stories that makes us think, stories to teach in class, classic stories that allow us to share culture with the rest of the community. We are making new videobooks with younger readers, but…. that we will tell you in the next report! 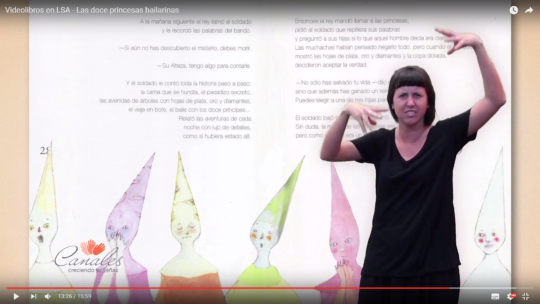 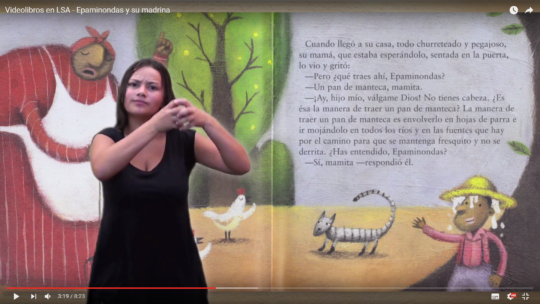 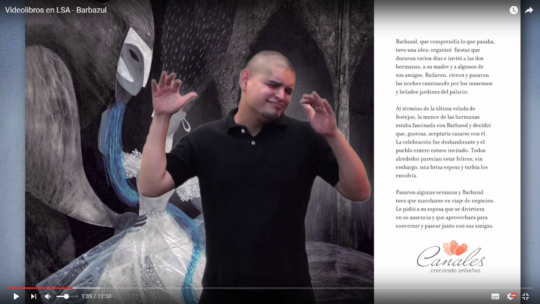