A home in a village with latrine (l) and silos (r)

Crowdfunding Project: Stopping Malnutrition in Children Under Five in Zambia  Report to Donors

Thanks to your donations we were able to start our project. For example, when after some delay the money reached our bank 80 km away, we were able to buy bicycles to get from Tikondane Community Centre to the villages and buy scales so that we could record the weights of the children. In the first two weeks we cycled to the first ten villages to distribute Onenepa. The third week we evaluated the data we had gathered.

The clinics issue record cards for the first 60 months for the under-fives, but many are inaccurate since many of the mothers are uneducated, birthdays and dates are not important in Chewa culture and the cards are sometimes inaccurately filled in by the staff of the clinics. We therefore had to determine which children were underweight and in need of food supplements. We included children whose weight was not dramatically under the average for their age, but was going down.

We also had to consider how the mothers could give the supplement to their children and what equipment they would need. We then decided what to teach about a balanced diet and the importance of healthy and regular nutrition.

In the villages most families lack the basic amenities and equipment that we take for granted, so we decided to give to every mother a spoon and a fork in order that they would be able to mix the supplement with water or add it to some mashed fruit, vegetables or porridge. To mix the powder with water they would need a plate or a bowl but as new kitchen tools would probably be shared with the whole family we started to produce our own small tins, using old soft drink cans. During this time enough Onenepa for distribution to 100 children for the first two weeks was produced at Tikondane. The supplement includes pounded soya beans, pounded maize, Moringa powder, milk powder, dark sugar and chocolate powder, thus the three food groups, plus abundant vitamins and minerals. This should also stimulate the appetites of the children.

When all preparations for visits to the villages had been made we informed the headmen about the days we would come. Each time our two teams made an early start to ride to two different villages. During the first week, even though a funeral interrupted our plans, we were able to visit ten villages. We returned to the same villages with the second supply for the week after. On arriving at our destination, we always had to wait for some time until everyone appeared at the meeting point. We could then introduce ourselves and the programme and teach the mothers how to give Onenepa to their children as well as the need for a balanced diet. As people here are not that used to adding vegetables to their meals we presented Moringa and explained different ways in which to use this plant which is richer in minerals and vitamins than any other vegetable. To stress the importance of enough vegetables being included in our feeding plan we also gave a moringa seedling to each mother.

We then weighed each child and interviewed the mothers and children to get information about the family and the health of their children and observed the behaviour of the child and its interaction with its mother.

At the end of the interview we distributed the first package of Onenepa, plus spoon, fork and tin to each mother.

For our second visit we prepared a different questionnaire and included a protocol about the food that the child had received the day before and the morning of our visit.

Of course, not all the mothers who were supposed to come showed up, while others who had heard about our project and wanted to take part, arrived. So we had to decide if each child was really underweight and if there were enough supplies to include it. We now plan to distribute Onenepa to all the children we treated during the first two weeks for a third time and to see the next group of children for the first time.

We really look forward to continuing the project and hope soon to see first changes in the weights of the children and the minds of the mothers.

Thanks again for your support - without your donation ‘Stopping Malnutrition in Katete District’ would not be possible! 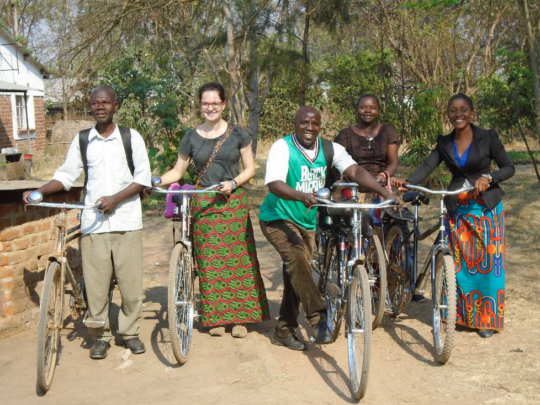 Our team ready for action! 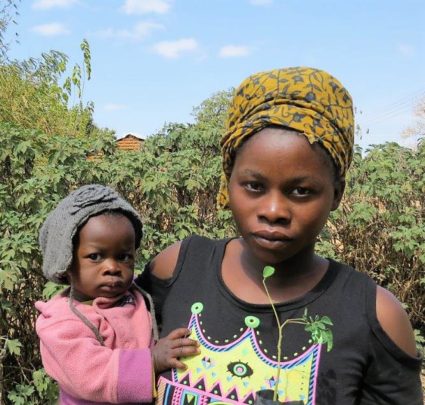 Gracious, her mother and moringa plant 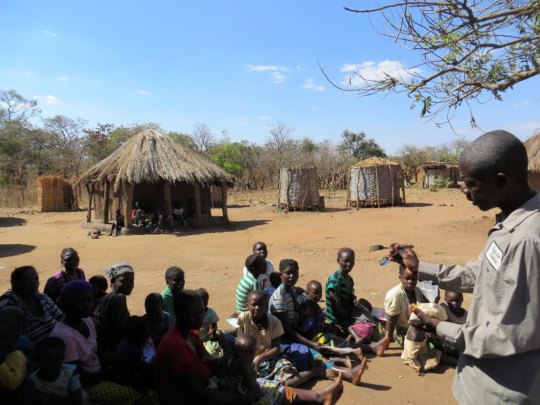 explaining to the mothers how to prepare onenega 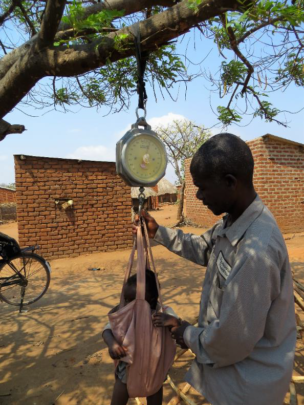 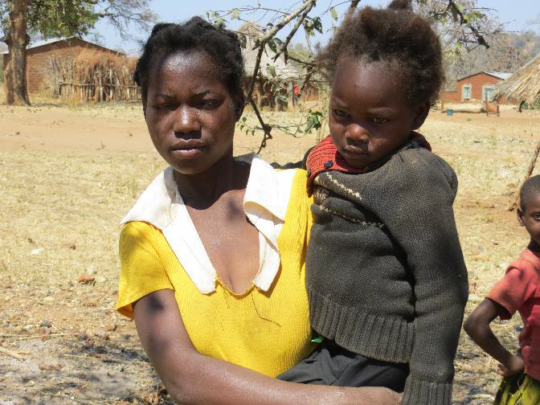 Mathilda with her mother - first visit 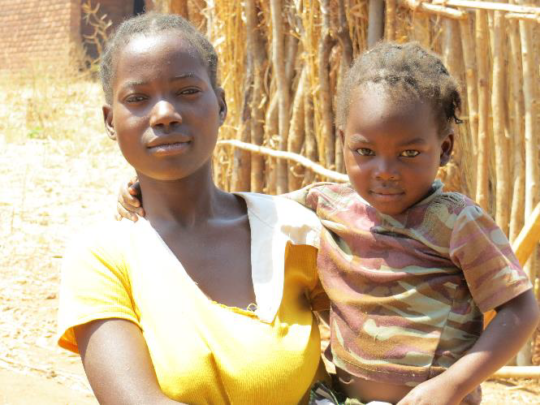 Mathilda with her mother - second visit 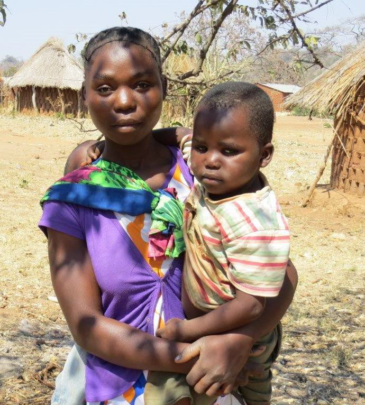 Gibson with his mother - first visit 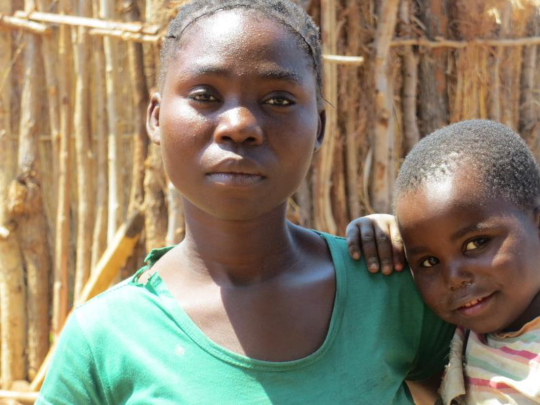 Gibson with his mother - second visit

Progress Report: 'Stop Malnutrition in 200 Under Fives in Zambia' 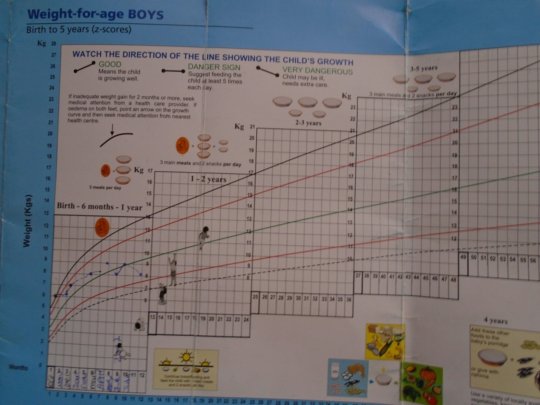 The graph of weight-for-age for children

One month has gone by since, to our very great joy, the target sum of our crowd funding appeal was reached – thanks a million to all who helped us reach the goal. This allows us to start helping the malnourished ‘littlies’ in several villages to develop well. Alas, we have not been able to send a personal thank you to all our donors, but we hope to keep you up to date with our progress.

The village headmen in our management committee were asked to collect weight by age record cards for the under-fives from the village women. This started slowly– this is Africa – but has become unstoppable, even though we have already reached our target of 200 malnourished children. Our interns have worked on the questionnaire to be taken to the families when handing out the food supplement and discussed the pitfalls. This is not always simple e.g. when asking ‘what food did the child eat yesterday’. Here the term ‘for the maize pap (nsima), which only provides starch, but no vitamins nor minerals and very little protein.

Our ‘Vitagoat’ building was upgraded to meet the standards of the health authorities. We made the first official batch of ONENEPA for the project. This produced one week’s supply for 30 children, so we will need 27 more sessions to cover 4 weeks for 200 children. The ingredients are bought from South African shops in Chipata. We will also buy two pairs of scales so that the weights of the children can be checked. We had hoped to borrow scales from the Department of Health, but alas their clinics only have one pair which cannot be spared. More supplies will be bought in Chipata on Thursday. We always hope they will be available. Another problem is that we must not overload the taxi as there are many road blocks and policemen will find that we are doing the wrong thing by overloading goods and try to get some money from us for their dinner.

Very soon we hope to either upgrade the existing project or start a new one. You may be aware that the population of Katete is very traditional, so any change in behavior, which in our case includes giving more meals to the babies from 6 months onwards, is not only difficult to achieve, but poses real practical problems in the villages. Normally all food is eaten atone meal so there is no need to protect food from all sorts of creatures and/or kept cool. We are working on that one.

For now, with deep gratitude and very best wishes,

Elke and the interns and the whole crew of Tiko 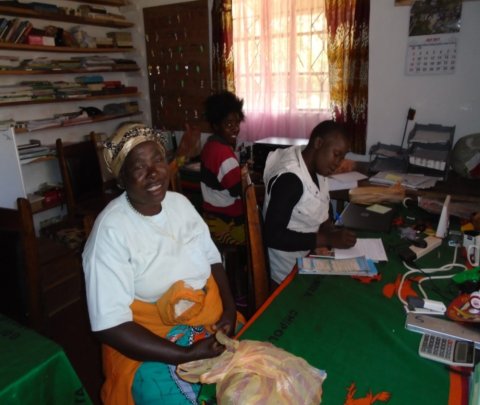 under-five cards are being processed and scanned 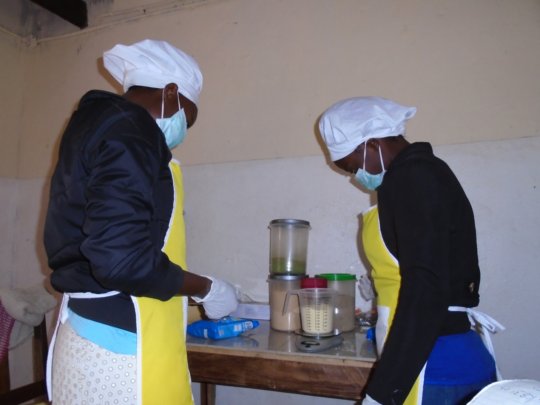 weighing of dry milk for the ONENEPA in clean room