Porridge and a new primary school 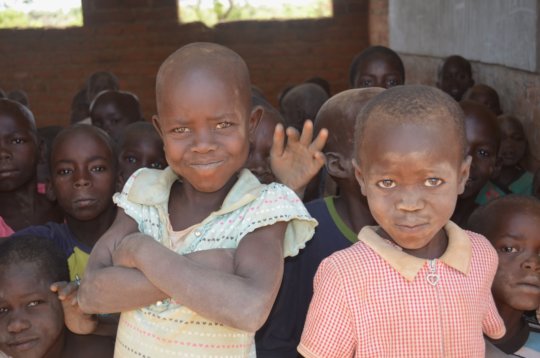 Children at the new primary school

I hope this finds you well and if you are now in autumn, have had a good summer.  If you are in spring, a good winter! In Uganda the conditions have been very tough this year with the rain coming very late, meaning the farmers had to suffer a significant period of drought.  This resulted in food being scarce and people going very hungry.  The farmers planted their seeds late, but luckily the rain stayed and they are now harvesting and it sounds as though it is a good crop.

I have two exciting updates to share with you from one of our Porridge schools - Lamin Pic in Putuke near Kitgum.

The first update is an unexpected outcome!  Putuke has a new primary school. This is really exciting for the community because the children were having to walk up to 5 miles to get to school.  Now they can walk for just 500 metres. The reason the school came to the village is because of your porridge!  The children in the nursery school are leaving nursery and starting out at primary streets ahead of the other children.  We spoke to the head teacher who told us that "our" children are out performing the others, are healthier, cleaner (not difficult when you look at how dirty they are in the photo below!) and speak English.  Most of the parents are able to pay for their school fees - £3 a term - because they are Seeds for Development farmers and receive seeds every season.

The second exciting update is in the same village. Thanks to a kind donation from The Rotary Club, we are building a new nursery school to replace the one that is always collapsing or being destroyed by fire, wind or rain.  This will make a huge difference to the children and teachers.  They will be able to put things on the walls and have a secure and dry place to learn.

We are able to do these projects because of your generosity.  Let me explain beyond the obvious.  Because of your donations and support to provide a daily cup of porridge to every child in the schools we support, they are performing much better than their counterparts who a) don't attend nursery at all and b) if they are at nursery they don't eat.  The results are clear to see when we visit.  This has given other people and now organisations, such as The Rotary Club the confidence to invest in us and our more ambitious projects.  As well as The Rotary, we have successfully applied for our very first grant!  This grant means we are starting a project called Let's Speak English, which will teach 230 child mothers and ex-child soldiers how to speak English (obviously!), something they have been asking us for for many months and years.

So thank you so much for supporting us.  The children are in their last term before the end of the school year.  We expect many to graduate and move on to primary school.  We hope that we will be able to support the other 4 villages where we have nursery schools to build primary schools.

With gratitude and all best wishes. 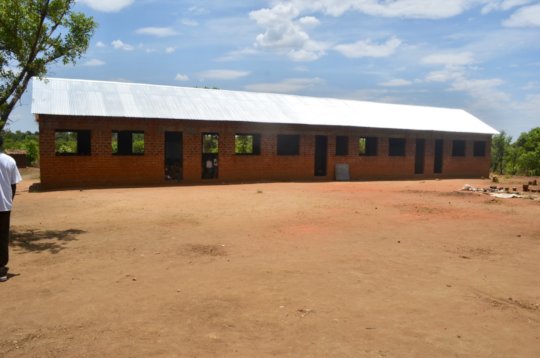 The new primary school in Putuke

Our new nursery school is being built

Needing porridge now more than ever

By Alison Hall MBE - Founder of Seeds for Development 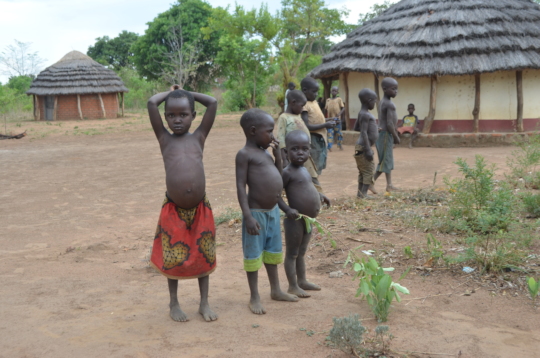 Hungry children in the dry season

You can’t have missed all the talk about climate change – on the news, in the papers, online, on the streets.  It is everywhere and in April, during our recent trip to visit the projects, we saw first hand the devastating impact it is having on the poorest people in northern Uganda and especially the children.

Our porridge is quite literally saving lives at the moment and we couldn’t do it without your kindness and generosity – thank you so much.

We were visiting the schools in April and saw for ourselves what so many people are writing and talking about – how climate change is having such a terrible impact on the people who can do nothing about it.

The rain should have started in March, but by the end of April it still hadn’t come.  In fact it didn’t start properly raining until nearly the end of May.  This meant that the farmers couldn’t plant their seeds in March when they normally do.  This means that their crops won’t be ready until the end of August, when they should be ready in June.  And this means that they don’t have any food and can’t afford to buy any as the prices go rocketing sky high.  Normally the farmers store enough food and can live off crops like Cassava during the dry season and until they start having some crops in the rainy season.  But we saw that they were running dangerously low on supplies.  You can see the impact of this in the photo of the children with their big bulging tummies – a sure sign of malnutrition and hunger.

There is also a very real danger from wild bush fires that tear through villages and homes destroying everything in their path.

Our porridge is probably the only food that the children in our nursery schools will have all day long.  Without your kindness and generosity we wouldn’t be able to keep on providing porridge for them.  The number of children attending the nursery schools is increasing – mainly because we give them porridge every day – and so our costs are increasing every month.

We can all do our bit to save our planet and, THANKS TO YOU, we are able to do our bit to give the youngest children a better start in life with a nice big cup of porridge every day.

Thank you for your support, it keeps us going in more ways than you can imagine. 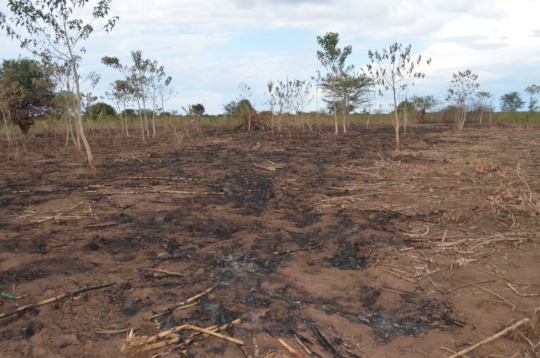 Wild fire destroys everything in the dry season 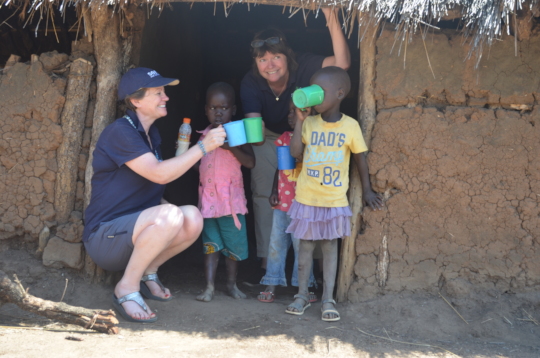 Checking on our porridge distribution 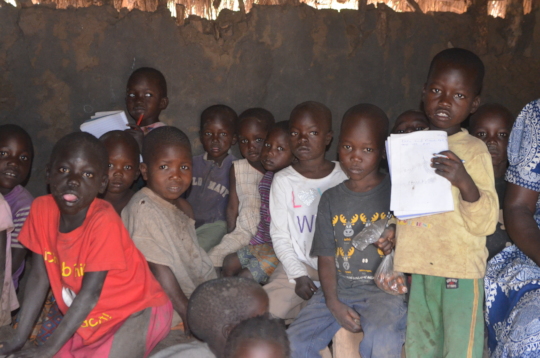 Children at school in Putuke, near Kitgum

Drought and a day at Buckingham Palace 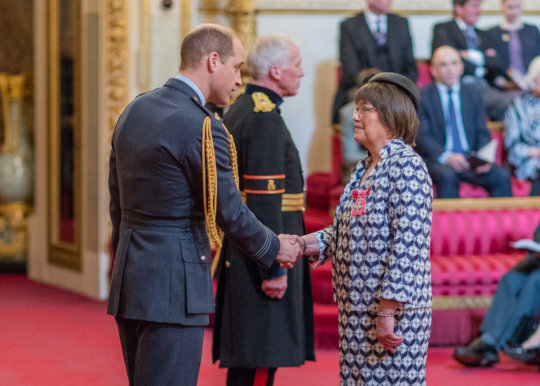 Receiving my MBE from Prince William

I write you this report surrounded by gifts, clothes and parcels to pack in my suitcases to take to Uganda tomorrow.  Our trips seem to come round so quickly and I am so excited to be going back.  However, my excitement is laced with trepidation as news from our villages is not too good.  The weather is not behaving and there is drought.  It should have started raining at the beginning of March, but not a drop has fallen.  I have heard that the swamps are so dry that they are burning and that cows are dying.

For us and our projects, this is bad news.  The farmers have either planted seeds that will not grow, or haven't planted seeds and the harvest will be very late.  Either way, it means that the people will go longer without food.

We will have a much clearer idea of the situation on the ground when we see it with our own eyes and will update you.

In other news, which is rather exciting and you might already be aware.  I was honoured to be recognised in the Queen's 2019 New Year Honours List by being awarded an MBE for services to victims of war in northern Uganda. If you are unfamiliar with the Honour System, you can find out more in this  link to Queen's Honours.  It is a massive honour and I am still a bit numb. Last Tuesday, we went to Buckingham Palace where Prince William presented me with my medal. It was the most unbelievable day.

This MBE is for the people of northern Uganda.  Every time I go, they tell me to be their voice in the world and share their stories because otherwise they have no voice.  I feel that this goes a little way to the world hearing their voices and listening to them.  To receive this award has strengthened my resolve to make sure that they are not forgotten and also made me realise how many thousands, if not millions, of people there are in the world who have no voice.

Your support, not only provides children with a cup of porridge but hugely contributes to giving them a better future.  A future where they will have a voice, because they will have had an education.  We cannot thank you enough for your kindness and generosity.

Now, back to those suitcases...

With love, gratitude and all best wishes. 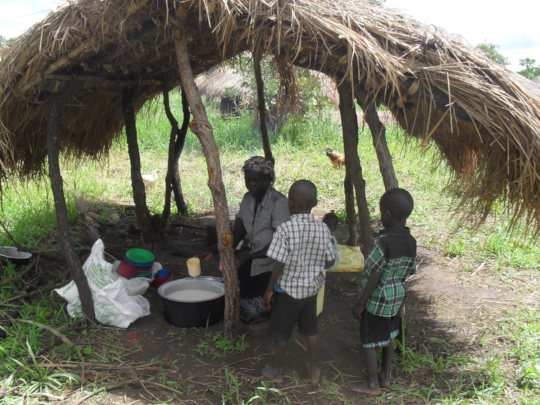 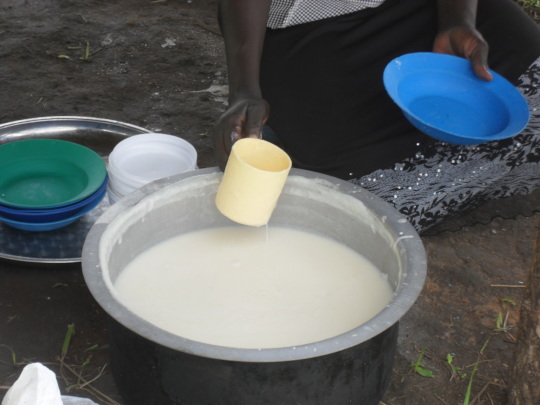