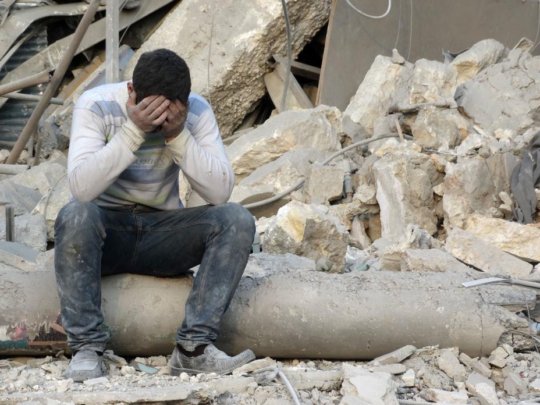 Syrian government forces wrested full control of the city of Aleppo in December 2016 after months of siege. Some 36,000 people evacuated the city in convoys of buses bound for northwestern Idlib province.

Amid a tenuous ceasefire, the International Rescue Committee is providing emergency cash relief, trauma counseling and other vital support to hundreds of families in Idlib. We remain concerned that violence will follow them to this already unsafe part of Syria.

IRC aid workers reponding to the crisis have been speaking with recent arrivals to learn more about the immediate needs of people who have fled Aleppo and the challenges they face in Idlib. Read about the dire humanitarian situation and hear from one of our aid workers (unnamed for security reasons) on the ground.

What happened in Aleppo?

A months-long siege of eastern Aleppo ended in mid-December as Syrian government forces wrested control of districts that had been held by rebels.

The intensifying bombing of these neighborhoods in the weeks before the ceasefire forced many residents to shelter underground, and tens of thousands to flee. Those who remained were living in fear of retribution: The United Nations reported that families were being shot in cold blood as their neighborhoods were retaken, and voted to monitor evacuations of civilians and report on the plight of those who stayed behind.

After delays and false starts—including an attack on an ambulance—the evacuations began on December 15, overseen by the Red Cross and Red Crescent. The first convoy of ambulances and buses to leave the city included 200 wounded people. The evacuations stalled again for several days amid incidents of violence that included setting fire to buses that were to take people to safety.

Some 36,000 people were evacuated from eastern Aleppo before the last buses carrying residents left on Dec 22.

Many families were separated in the chaos of the evacuations and unable to stay in touch. Apart from sporadic internet access, communications channels were down across eastern Aleppo. One woman we spoke with after she arrived in Idlib said she hadn’t been able to reach her adult son and doesn’t know if he was able to get on a bus or if he was arrested.

Another woman, whose husband was killed during the siege, pushed her children onto a bus only to have its doors close against her. “I started screaming and banging on the bus so I could get on the same bus as my children,” she said. “Some people helped me and I got on.”

Where did people who left Aleppo go?

Most of the evacuees joined some 700,000 displaced Syrians already living in mostly rebel-held Idlib province — among them, more than 130,000 staying in nearly 250 makeshift camps.

Over the past six weeks, thousands have arrived in and around the town of Al Dana, around 20 miles west of Aleppo in eastern Idlib, where the IRC is providing emergency relief.

What are the conditions people are living in now?

Most people are still wearing the clothes they wore when they were evacuated from Aleppo. It's too difficult to launder them because of the long time they take to dry in the cold winter air. Some are selling donated clothes and other aid items they receive in order to get the cash they need to pay for food, rent and in order to get specialist medical care.

Living conditions are dangerously congested. Many of those who arrived at established displacement camps in Qah have had to share tents with other families who were already there, meaning some six-person tents are housing between 10 and 15 people.

In Al Dana and its outskirts three to four families are sharing small, unfinished houses without heat, toilets or running water. Living conditions are in some cases even more cramped for those living within a host community in Atmeh on the Turkish border. In one instance a single room with a blanket dividing it in half is being shared by 22 people from two different families.

The overcrowding is creating particular privacy concerns for women.

Have people been able to get treatment for their injuries?

IRC health teams in Idlib have seen first-hand the immense cost to people’s health from living under siege and constant bombardment in eastern Aleppo. We have met people not only injured by bombs, but who have suffered unnecessarily because attacks on medical centers left them without health care and the siege prevented them from getting the medicine and food they desperately needed.

One eight-year-old boy suffered with shrapnel in his eye for more than two months because his family could not get treatment until they left the city. His father was also injured; however, the family is prioritizing their son’s treatment, having sold some of the aid they had received to pay for his medical care. The IRC has connected the family with specialized support.

Some injuries are not physical. Many people are displaying symptoms of post-traumatic stress disorder and are in need of intensive counseling.

One man recalled aerial bombardments so deadly that he and his neighbors “had to step on our families’ and friends’ bodies” as they fled. He said, “We did not feel anything, we were shocked.”

Also, people with chronic illnesses such as diabetes, high blood pressure and asthma have seen their health deteriorate because of lack of medicine, medical care and sufficient food.

What else do people who have fled Aleppo need?

Many people lost their sources of income and their savings during the evacuations and are unable to afford proper shelter. Some families have told us that food is their most immediate need — especially formula for babies. Fuel is also a high priority.

And safety remains paramount: Many people say they fear they’ll face the same intensified level of violence in Idlib that they faced in Aleppo.

What challenges do children from Aleppo face?

IRC aid workers identified nearly 50 children separated from their parents during the panic and confusion of the evacuations. Lost phones and the lack of phone coverage in Idlib has made it challenging to trace relatives. Many of these children have since been reunited with their families, and the IRC is referring the others to specialized agencies who will take up their cases.

Many of the children who have arrived from eastern Aleppo are bored and desperate to get back into school. And, like most adults who fled the city, they too are traumatized by their experiences under siege.

What is the IRC doing to help people who have fled Aleppo?

The IRC is helping many of the estimated 7,000 people who fled recaptured eastern Aleppo and settled in the area around Al Dana.

We have delivered $100 in emergency cash to each of more than 600 of the most vulnerable families in Al Dana so they can purchase the essential items they need. The IRC will soon reach another 1,700 families in surrounding areas with cash relief.

The recent arrivals say that cash is by far the most useful form of assistance they have received. Before many were forced to sell clothes and blankets given as aid in order to buy food, pay rent or get specialist medical care.

So far the IRC has provided health care to nearly 700 people fleeing Aleppo. We are running a clinic in Qah near the displacement camps in far northeastern Idlib, and dispatching two mobile health clinics to the surrounding area.

The IRC is also providing counseling and other care to traumatized survivors of the violence in Aleppo as they settle in Idlib.

What else does the IRC do in Idlib?

The IRC currently supports eight health facilities in Idlib to enable them to provide medical care to more than 100,000 uprooted Syrians. We support five schools providing an education for 4,000 children. We also support four livelihood centers that help around 5,000 Syrians each month boost their income through skills training, job placements and business start-up grants.

We also provide emergency cash relief to the most vulnerable families.

Will people be safe in Idlib?

Escaping Aleppo doesn’t mean escaping the war. The current ceasefire is a tenuous one. After witnessing the ferocity of attacks on civilians in Aleppo, the IRC is very concerned that the sieges and barrel bombs will follow the thousands who arrive in Idlib.

The recent arrivals IRC aid workers have been meeting in Idlib are "concerned that they’re moving from one killing zone into another," IRC president David Miliband told PBS NewsHour.

We already know Idlib isn’t a safe area of Syria. The attack on a school in the town of Hass in October left 22 children and six teachers dead—and two IRC-supported hospitals were attacked in the province lasy year. There is a real danger that such attacks will not only continue but intensify.

A senior U.N. official has warned that Idlib "could be in theory the next Aleppo" and said that a cessation of hostilities across all of Syria would be the only way to prevent another bloody battle like the one that devastated the city.

What will people fleeing Aleppo do next?

Many people we spoke with in Idlib told us their first priority is to find missing relatives who became separated from their families during the chaos in Aleppo. Others said they needed to replace missing birth and marriage certificates and other important documents.

Beyond that, none of the new arrivals the IRC interviewed said they were able to consider what their future plans were.

They know they cannot return to their homes because of possible retaliation by government forces. They said they would seize any opportunity for support that would help them survive and be able to feed their families in the meantime, until they can decide on their next move.

How else is the IRC helping Syrians?

The IRC is the only international aid organization working on all fronts of the Syria crisis. We're helping millions of Syrians inside Syria, in neighboring countries in the Middle East, and in Europe. The IRC also has 29 offices across the United States and has resettled hundreds of Syrian refugees who have been accepted into the U.S.