RENEWAL OF HOPE FOR THE VULNERABLE CHILDREN-6-2020 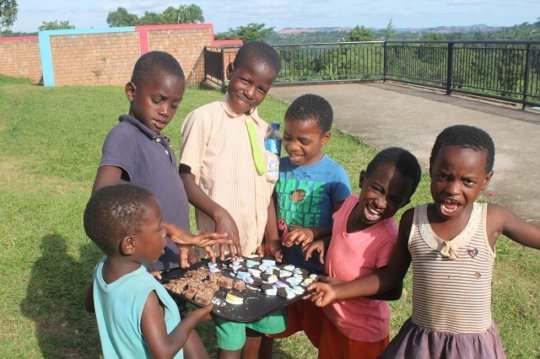 some of the beneficiaries at the Children's home

Feeling secure in your environment and having hope for a better life is the basic human need and must be fulfilled before any other need. There are different kinds of securities people can have but for the vulnerable children, they mainly need the physical and emotional security to have their hope for life renewed every day. Being free from suffering physical harm and having enough food and water to keep you alive are some of the physical securities. Access to psychosocial support through different activities like birthday celebrations, counseling sessions, and other activities provides emotional security. With the mission of bringing to vulnerable children in Uganda, Another Hope Children’s Ministries provides accommodation, food, clothing, and medical care to those children that need it due to various issues such as abandonment. Availing all these needs helps to keep the hope of the children on the sponsorship program new. The special days celebrated like Easter and Eid day where the children are fed on special meals make them feel loved. There are rescue cases handled by children who were abandoned by their parents and families and got enrolled through the police. These children are provided with shelter and other needs of life which makes them feel secure and have their hope renewed. The total number of accommodated children is twenty-six (11 males and 10 females), these children are able to receive physical, spiritual, and emotional security. Rescue Case handled. The young boy enjoying a special meal at Another Hope Children’s Ministries. A boy who was referred to Another Hope Children’s Ministries by Nansana police station was abandoned by his mother at a friend’s place of residence. The mother of this young boy who was nine months went to stay with a friend after separating from the father to her son. She stayed with her for two weeks and one morning, she went out giving an excuse for going to buy milk for her son but she never returned. The child remained in the custody of her friend who reported to the police and handed over the child because she couldn’t afford to take care of him. The police through the child and family protection unity and the office of the probation officer contacted Another Hope Children’s Ministries Management to rescue this child. The child has been under our custody for one and a half years but he is happy and healthy because of the love and support that sponsorship brings. 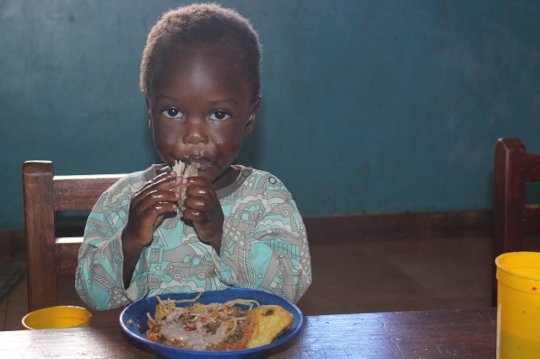 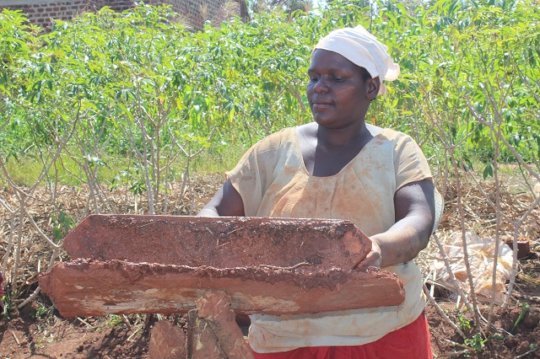 As the government of Uganda was forced to lock down the nation and shelter in place orders, millions of families found themselves at the sharp end of the contracting economy. As the people were continually asked to stay home and put their income-generating activities on hold, many faced food insecurity due to a rise in poverty and a lack of funds to purchase food items.

Children suffered the most in such conditions of living in hunger and starvation because their bodies are less resilient to the effects of living without food. They were exposed to other risks like getting malnourished and deserting their families to streets and childcare institutions in a bid to access food. Because our focus is on saving the lives of children and their families, Another Hope Children’s Ministries started the food relief project which was successfully implemented and benefited a number of families in different communities. The items given out included: maize flour, soap, sugar, rice, salt, tea leaves and cooking oil. The families which received were in four categories and these were; the families of children under Another Hope Children’s Ministries sponsorship program in the community (45 households), the women savings group established by Another Hope Children’s Ministries (5 households), the men’s motorcycle riders (boda boda riders) (10 households) from the community stage and the local leaders (4 households) as shown in the table below.  We are so grateful to all of you our friends for the support given to our people.

A total number of 432 individuals from 65 households benefited from the food relief project. Most of the families picked the food items from Another Hope Children’s Ministries premises and the few who live in distant communities, the food items were delivered to their homes. A very small number of five household representatives who were shortlisted to receive the food items didn’t turn up and didn’t communicate why.

How the project made an impact on the beneficiaries and their families.

The beneficiary is a single mother with eight dependents living in Gimbo village wakiso district. She is one of the community parents and she is so thankful for the food which was distributed. Before the distribution, she struggled to feed her children by doing small jobs like digging in people’s gardens but this could only bring in daily meals and in case she didn’t get where to work, that meant they were going to starve. This also affected her personal work of lying bricks which could not only earn her any income immediately but also she needed energy. As a family to be able to lay bricks, they needed to have food. The family used to survive on one meal on a good day and starve on other days.  As days went by, the small jobs became minimum because the rest of the people didn’t have money to employ them and this raised the pressure of feeding the children, stress and depression.

When the food was distributed, it brought a great change in the family. The children were freed from starvation and not getting satisfied because of eating little food and once a day. The beneficiary together with her children resumed their brick lying activity since they have the food and are no longer worried about anything. Soon the beneficiary will have her bricks ready for selling to earn some money which will help her stock more food and the family will not stand any risk of starving any more. Great thanks to everyone who donated to ensure the food relief project happens.

I cannot thank enough for what was done in our community. I am a boda boda (motor bike) rider with a small income especially during this situation compared to the responsibilities on my shoulder. The food was distributed at the time it was most needed. I personally was stuck not knowing how to handle the rest of the responsibilities I had because all the income I was earning was spent on feeding and it was not enough to feed the family as needed. The burden of rent, children’s medical needs meeting the bank loan were all on my neck but I couldn’t handle any of these. The food given out relived me of the responsibility to feed the family and gave me room to meet other needs. I am so happy that Another Hope Children’s Ministries with all its partners to have came to our rescue. God bless you all 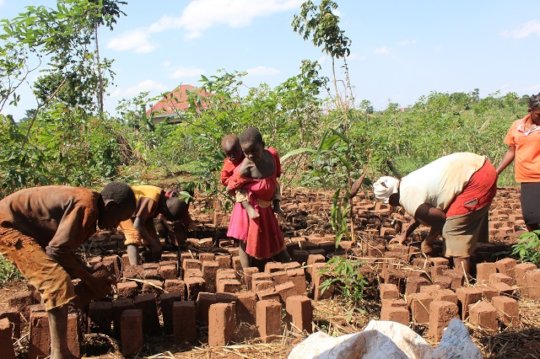 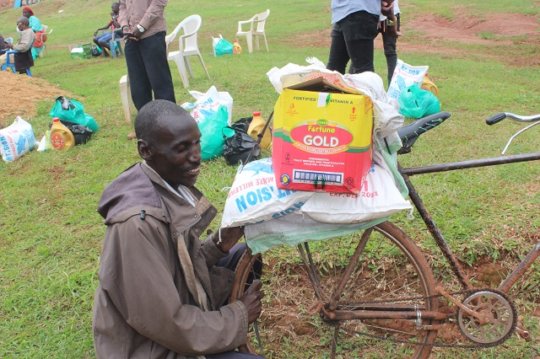 one of the beneficiaries 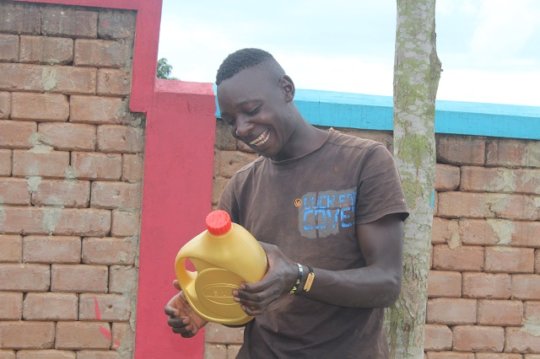 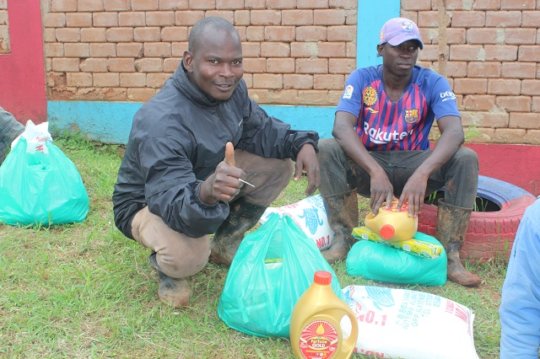 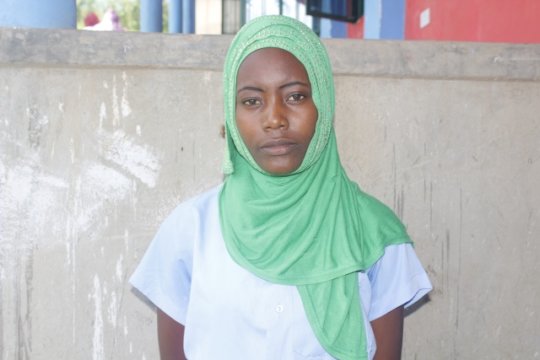 For a long period of time, women have faced more difficulty than men in accessing public services, social protection, employment, and market due to cultural norms and other reasons. This made the women most vulnerable to the increasing poverty in these communities since they fully depend on their male counterparts. Because they are looked down upon as being unskilled, unemployed, being single mothers and teenagers, they are taken through domestic violence, sexual harassment hence affecting their self-esteem and confidence. It has also led to a rise in child abandonment because the women have fewer opportunities to earn and the men aren’t taking their responsibilities as fathers. Another Hope Children’s Ministries considered promoting self-sufficiency among young women as one of the ways forwards to address such cases in our societies by equipping them with marketable skills. Self-sufficiency is the ultimate goal for every living individual because it allows a person a sense of inner completeness since one is in the position to fulfill his/her needs. Skilling young women project implemented by Another Hope Children’s Ministries has benefited young women from different parts of the country through the skills acquired in the vocational training they are taken through. The young women are trained in different fields of their interest like hairdressing and cosmetology, tailoring and fashion designing, Early Childhood Development and Catering and hotel management. At the beginning of the year 2020, some of the young women trained went out into the field of work after a full year of being trained and they are happy that the skills they acquired are putting them in positions of being self-sufficient and helping their families as well.

One of the beneficiaries is a female Ugandan living in Lulumbu village, Mpigi District. After her father abandoning the family, her mother became the breadwinner for the entire family. Because her income was less to meet all the family needs, this young lady has to give up education. She stopped in senior one and sat home in 2017 because she couldn’t do any work due to a lack of skills. In 2019 she heard of the opportunity for skilling young women availed by Another Hope Children’s Ministries and she enrolled to be trained in tailoring and fashion designing. She went through one-year training and whatever she learned in tailoring and fashion design and the craftwork is already helping her become self-sufficient. Our beneficiary got employed because of her extra skills in art and craft making and she has been working for five months. In this period, she has been in a position to get some income to take of her sick mother and meeting her personal needs. She has also managed to save some of the income and her purpose for saving to purchase her own sewing machine and become self-employed. The beneficiary is so thankful for the skilling young women to project because it was the beginning of her changed life and she hopes it stays to benefit many more young women like her which will help in making a large self-sufficient society.