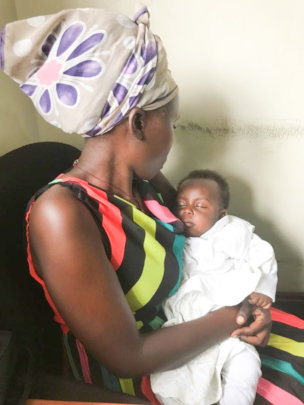 Immaculate with her HIV-negative baby

My name is Immaculate, I am 24 years old and a mother of one. I am a resident of Namuwongo, and I have lived here for the past three years. My journey to staying in a slum area has been riddled with a lot of hardships. At 20 years of age, I had a child with my partner then, and I felt happy and fulfilled, little did I know that this was temporary. By then, I lived with my partner in Kanungu (about 430 kilometres from the capital, Kampala) and we led very simple lives. Shortly after my first son was born, he began to terribly fall ill from time to time. I became terrified at this point and honestly, I had run out of options. To make matters worse, our finances had really become undependable, we lived on less than a dollar a day.

One day, my partner suggested that we move to the city where opportunities seemed better than our current situation. Contrary to our anticipation, life was even harder than it was back in the village – at least we had food from the garden back home. In the city, we occasionally went to bed with empty bellies. And all this while, our son’s health was just getting worse.

Within the Namuwongo area, I heard about the “Know-Your-Child’s-Status” campaign from a community health worker who was carrying out health education and follow-up in the community. I was curious and desperate so when she advised me to take my child to Alive Medical Services (AMS), I did not hesitate. Upon my arrival and following tests carried out, my son was confirmed HIV positive. This was impossible! I insisted on the health workers running another test and that is when a counsellor urged me to get tested as well. I must admit, I was mortified! I couldn’t imagine or handle the result, so I hesitated and did not take the test that day – I walked back home.

I was in denial about my son’s status so I did not discuss it with my husband in the hope that the health workers were wrong and that another test would prove them otherwise. A few days after my visit to AMS, I received a follow-up call and a counsellor requested me to come back in at least to talk to someone. I gathered courage and did just as she suggested. This time around, after a considerate amount of time with the counsellor, I decided to get tested as well. When the result turned out to be positive, I lost my mind! The world came crashing down on me. On disclosing to my husband, he decided to leave me alone with our son. Sadly, my son succumbed to measles shortly after that and died.

This pushed me into a depression – I wanted to commit suicide, I wanted to end it all. But through all this, AMS never gave up on me. Not only did they keep calling me to ensure that I came to the clinic for treatment, but they also made sure to physically check on me in the community. Subsequently, I started adhering to my treatment, got some domestic work to do, and later found a partner. I applied the advice from the counsellors regarding disclosure. When I thought it appropriate, I disclosed my status to him, and he was supportive and to ensure that his negative status was maintained.

One year down the road, I conceived twins! I made sure I attended all the recommended antenatal care visits and in May 2019, I gave birth but sadly lost one of the twins during childbirth. This pushed away my partner who decided to leave. I was about to fall back into the same patterns but due to the constant support especially psychosocial support from the counsellors, I was able to accept my situation and concentrate on living for my son and myself.

Today, I am one of the peer mothers that help in providing peer-to-peer support to newly diagnosed HIV positive pregnant women. I share with them my story in case it can help them see past their current situation, adhere to their treatment and take care of their babies when they are born. I still have a long way to go, but for this far that I have come, I am victorious! I am thankful to the partners and donors of AMS that send help to support people like me. I am forever grateful, and I will always try to pay this kindness forward.

We won't stop until we see an HIV free generation! 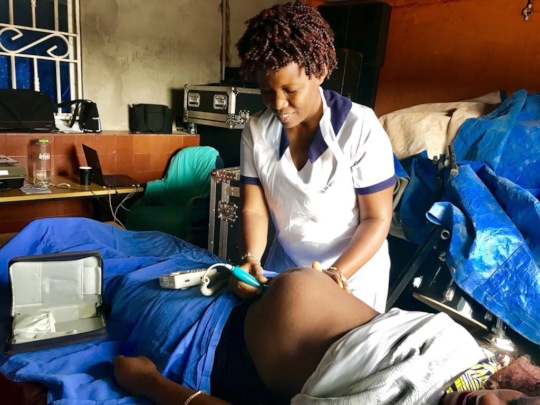 A midwife examins a pregnant mother

It has been a minute, but we are still here! We have been up and about with several developments towards the provision of free, inclusive and comprehensive HIV care with elimination of mother to child HIV transmission. We won’t stop until we see an HIV free generation!

Within the last three months,

Every Thursday AMS holds a prenatal care clinic for pregnant women where they are offered ultrasound scans and get a chance to be examined and attended to by a designated midwife.

Thanks to your support AMS has been able to continue reaching thousands of HIV positive individuals with holistic, inclusive and high-quality care. Since 2013 AMS has eliminated mother to child transmission of HIV and over 1000 babies have been born HIV negative. Thank you! 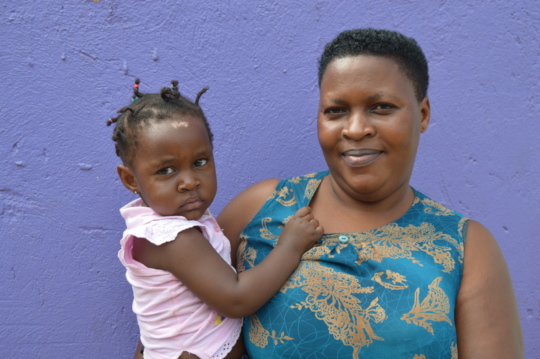 Mary with her healthy and HIV-negative Lillian

In 2013, Mary came to Alive Medical Services for a check-up. She had a fever and was hoping to see a doctor, receive some medicine, and head back home. Mary thought she only had a passing illness, but just to be safe, she decided to be tested for a number of things anyway.

When the doctor returned with Mary’s results, he told her something she would never have imagined: Mary, though married for years to the same person, was HIV positive.

“I was in such a bad state,” Mary said. “I just came into the clinic to get checked for a fever, and then I found out I had HIV.”

Terrified her husband would blame her for the illness, she didn’t say a thing until he developed a rash on his arms. Mary insisted he get tested for HIV, and when her husband came home with a positive diagnosis, he told her the truth. He had not been completely faithful in their marriage.

“The doctors helped me maintain good adherence throughout the pregnancy, following up with me as the months went by,” Mary said.

Within months, Mary’s husband left her for someone else. Regardless of his repeated deceit, Mary stayed strong. She kept up with her medication, came to the clinic for frequent check-ups, and focused on delivering a healthy, HIV negative baby.

After nine months of pre-natal care at AMS, and a year-and-a-half of check-ups post-birth, AMS doctors confirmed Mary’s daughter – Lillian – was HIV negative.

Today, Lillian is nearly 2 years old. Mary is in good health, and continues to come to AMS for her antiretroviral medication and regular check-ups. In addition, her family receives treatment of other infections – opportunistic or otherwise – free of charge.

“At first, I was so worried about having HIV,” Mary said. “But today, I’m okay. I’ve accepted it. And I’m well aware that if I take my medication well, I’ll continue to live.”

Through your support, more babies like Lillian can be born and raised HIV-free. We are striving to create an HIV/AIDS-free generation and the future looks bright with your helping hand. We speak for countless adolescent girls, young women, mothers and children when we say, thank you!

‹ 1 ... 3 4 5 6 7 8 9 10 ... 24 ›
WARNING: Javascript is currently disabled or is not available in your browser. GlobalGiving makes extensive use of Javascript and will not function properly with Javascript disabled. Please enable Javascript and refresh this page.