GIVE YOUR BACK AGAINST TRAFFICKING HUMAN BEINGS!!! 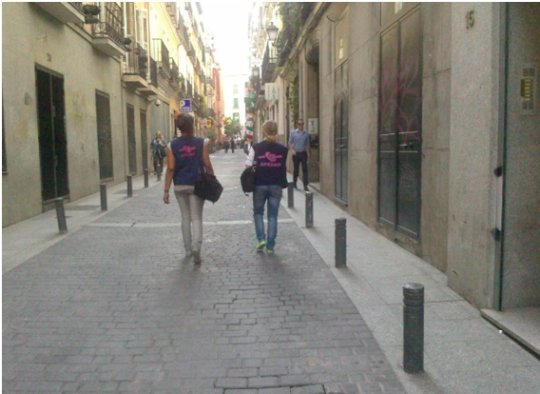 APRAMP once again reports new developments over the past three months!

In the middle of August in Spain many people are on vacation, but our Project continues to work every day, rescuing girls and women from exploitation. Therefore, we continue to train survivors of trafficking in employment so that they can become professional mediators and help all those women who are in need!

First of all inform you that the Mediation Course is already well advanced!!! And it is getting very good results from the students. All continue to contribute and learn about Community Mediation and will soon begin to put into practice all their knowledge.

But during this period, something important we wanted to make visible and we wanted to share with all of you!

In 2013, the United Nations General Assembly designed July 30 as “World Day against Trafficking”. Today, there is still a need to raise awareness and awareness of situation of victims of trafficking, to promote and protect their rights in all corners of the globe and in our country.

We are talking about a huge business whose merchandise is the person, the woman, who is forced and subjected to coercion and/or deception is moved, to be sold and exploited. They systematic violation of fundamental human rights resulting from trafficking prevents any voluntary decision and the exercise of the victim´s individual freedom, especially if it is a girl

Spain no stranger to this reality, which “has acquired enormous dimensions, with trafficking for the purpose of sexual exploitation being one of the cruelest and most degrading expressions and the greatest magnitude in our country”. It is therefore a problem directly related to gender, being a cruel manifestation of violence against women and the relationship of inequality and abuse of power between men and women, trapping thousands of women in prostitution contexts in our country.

APRAMP combats trafficking on a daily basis and rescues women who have been exploited for more than 30 years. But it is also necessary to send a message to society to turn its back on those who participate in this human market and to commit each person to its eradication and to the fight for a more just and equal world.

Failure to act, to look the other way, to stand idly by, to stand still, not to move forward, and also to be complicit in slavery.

That is why, on World Day Against Trafficking, we launched a campaign with a clear and forceful message, in which all the mediators were involved.

With the campaign, we were able to make visible this slavery that so many girls and women suffer daily on our street and in our cities, and that is why it is a pleasure to be able to share it with all our friends at Global Giving! GIVE YOUR BACK AGAINST TRAFFICKING HUMAN BEINGS!!! 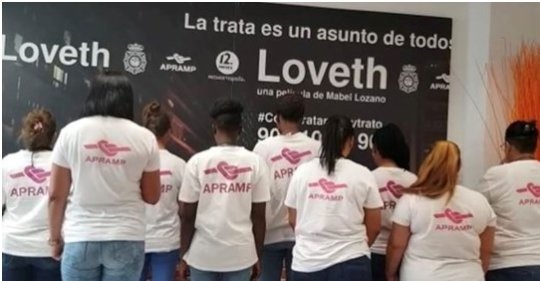 mediators in the Campaign 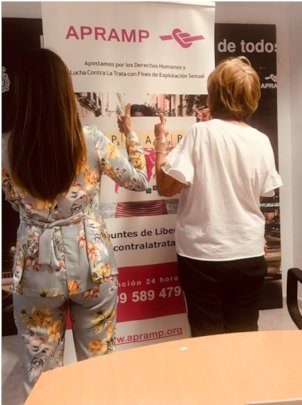 Block by block to get to the top! 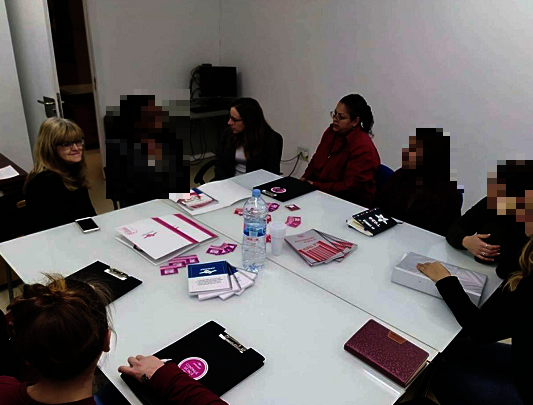 As you know, from APRAMP, we always like to give you good news and make you participants of them, to thank you again for your participation to achieve our goals !!!

A few months ago we started the official mediation course, together with UNED Spanish University, and we would like to inform you of everything that has been worked on and the results that our mediators are having!

The course started with BLOCK 0, where in an introductory way, all the participants had to present themselves in the discussion forum and where they would be explained in what the course consisted of and how to use the platform.

The BLOCK 1: INTRODUCTION TO MEDIATION, where mediators have learned that the term of mediation is "the intervention of a person or organism in a discussion or in a confrontation between two parties to find a solution", "it is a technique of conflict resolution, a more or less protocolized and structured way or process with the objective of resolving a conflict ".

In this same block the history of mediation has been taught, something fundamental in an introduction to a course to know the origins of the concept and the action.

How gratifying it is to discover that it was after the Second World War when the world became aware of the seriousness of the problem of not resolving major conflicts. In this post-war era new ideas appeared and creativity and imagination were put at the disposal of a society that had experienced the horrors of war and that yearned for and asked for peace. With all this they were modeling new and different techniques to solve conflicts counting on the "intervention of third parties".

After the first subjects of Block 1, all the participants had to make an evaluation through a notebook of exercises, activities and tests where they exposed everything they had learned, as well as participating in a forum where the topics discussed were discussed.

In the following BLOCK 2: MEDIATION BY ELECTRONIC MEANS. ONLINE MEDIATION. In this block, with which they are currently working, they are learning the new areas and scenarios that have appeared with the new technologies and that have generated new models of conflict and that in turn generate new spaces that can be used as spaces for mediation or mediation scenarios.

The participants have known that there are different channels for mediation, thus generating online face-to-face mediation, a mediation where electronic means are used but carried out in real time, which is why it is defined as face-to-face.

Within this Block several issues have been worked on such as:

- Mediation and the immigrant woman.

After this Block, all the participants will have to pass the evaluation with a notebook of exercises and tests, as well as continue intervening in the forum debate.

The results have been very favorable. Not only for the subjects that they are approving, but also that this course also teaches them to acquire skills and abilities with new technologies! And it motivates them a lot to know that all their knowledge that they have been acquiring in practice, will finally be able to complete it with theory.

"What motivates me the most about the course is knowing that finally and after so many years I will have theory and degree that will allow me to have many more work opportunities" Words from one of the course participants.

We are in luck! APRAMP, together with the National University of Distance Education of Spain (UNED) has managed to create a Community Mediation Course for Trafficking Survivors.

After several years trying to formalize the experience of the mediators, we have finally achieved that all this training is reflected in an online course that will give them a certificate of professionalism of 420 hours and that will open many job opportunities.

We are in full development of the "2030 Agenda on Sustainable Development", approved by the UN in 2015, where 17 goals (ODS) are established "an action plan in favor of people, the planet and prosperity "capable of improving everyone's life, without anyone being left behind.

This Community Mediation Course is part of these objectives, offering a quality education (SDG 4) with a gender approach that promotes equality (SDG 5), and contributes to reducing inequalities (SDG 10) among people, by promoting Sustained, inclusive and sustainable economic growth, providing students with opportunities for decent, full and productive employment (SDG 8).

The course has officially started on Monday, February 25 and will end on October 31, 2019. It will be developed in 4 Blocks. It is currently in BLOCK 0: aLF ENVIRONMENT (20 hours) where two modules will be taught:

0. Introduction to the course and the technological training environment aLF

1.    Strategies of organization and management of information. Preparation of reports

On February 20, the official presentation of the course was held, along with some participants, workers of the association and UNED staff, representatives of the different administrations.

The participants have shown their great joy and enthusiasm to start this official course as soon as possible, so they have already started to read the modules and get up to date with all the necessary documentation.

"We are very grateful that this has been possible thanks to APRAMP and the National University of Distance Education in Spain (UNED), since this course is a great step forward for our training as mediators and a great opportunity for our future" these are words of one of the course participants.

From APRAMP, we continue adding against trafficking and we have always believed that giving alternatives to women was one of the best options, therefore, training is essential for our mediators! And once again, we are very grateful for all the support we receive with your contributions. THANKS! 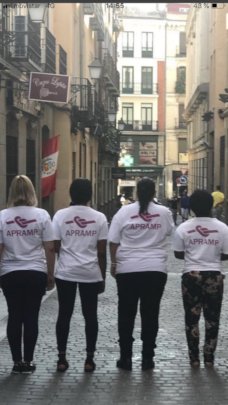 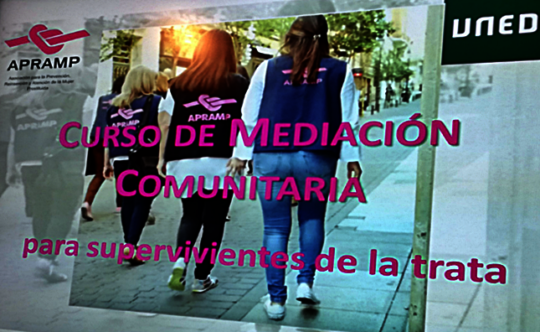