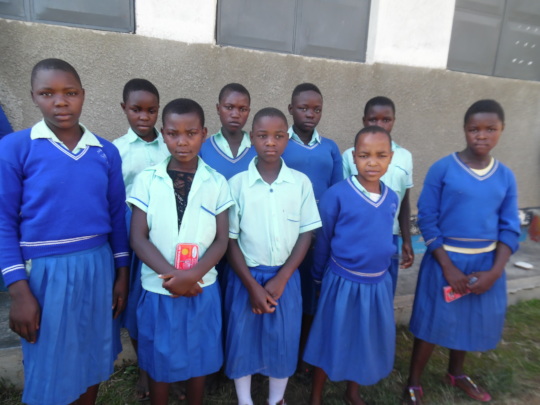 Since the implementation of the Empower Project in Karangura Sub County, more girls from Kibyo and Mahyoro Primary schools have joined secondary schools. Joy For Children Uganda team is proud to see the less-prevelleged girls in an this area that has for long been known for high cases of child marriage in uganda, wade through all their cultural threats and make it through the primary school cycle successfully.

In 2017 Uganda National Examination Board's Primary Leaving Examination results, seventeen of the supported girls from Kibyo and Mahyoro Primary schools passed and they will be enrolling for secondary education this year. The support offered to them in terms of goats, sanitary pads and scholastic materials contributed to their perseverence to complete the primary cycle.

Our sincere appreciation goes to our donors, the administration of the two participating schools and the political leaders of Karangura Sub county for having enabled us contribute to the success of the campaign towards ending child marriage in Karangura Sub county.

We pledge to reach out to more girls so that they too can keep in school, complete the primary cycle and proceed to other levels until completion. 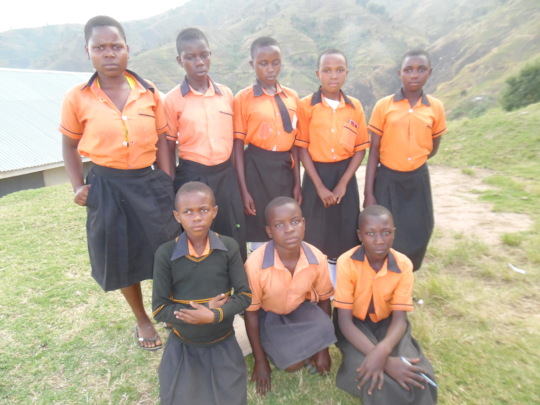 This training was facilitated by two employees of Joy For Children Uganda. The dual are experienced in working with communities and schools on issues concerning hygiene and sanitation especially menstrual hygiene.

The training was held at Nyatungo Childhood Development Centre (CDC), Kyenjojo District. The centre looks after vulnerable children from the age of three years up to the time the child is a grown up to take care of him or herself.

The training aimed at skilling school-going girls in adopting the use of Re-usable sanitary pads using locally available materials as a way of enhancing girl-child education as well as promoting the retention and participation of the girl child at school. The training was also aimed at creating awareness on menstrual hygiene since dealing with such a challenge requires one to have accurate and adequate information. In most of our communities, menstruation is considered more of a private matter. Sometimes, Menstruation is seen as a taboo by traditionalists yet it is a real life situation affecting girls and women on a monthly basis.

Over 75 pupils (girls and boys) and their care givers participated.

The workshop was guided by the following objectives:

Objectives of the Training

4. Enhancing parent’s skills in handling challenges that are faced by girls at school.

6. Equipping the men and boys to also participate in empowering a girl child through supporting them during their menstruation.

Joy for Children Uganda team trained both boys and girls and with their parents.

The workshop started with training both for both the parents and children.

The topics discussed    were;

Throughout the training group discussions were made and every one was given chance to freely   share their thoughts in reference to the topics being discussed. 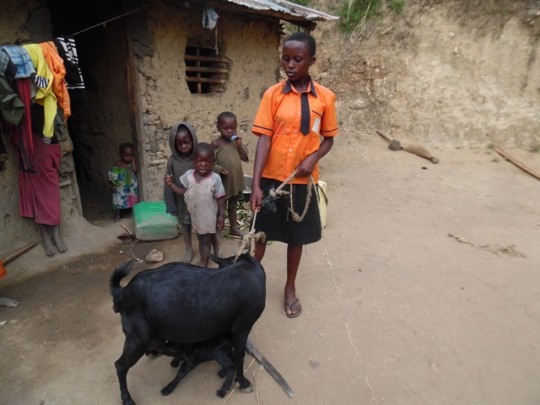 Considering the nature of JFCU’s activities and the ever growing world concern on child-marriage, my team and I felt urgent need to help end child-marriage in Karangura Sub County, Kabarole District; a sub county that was leading in child-marriage cases not only in Kabarole but also in the Western Region.

Karangura Sub County is located in Kabarole District, Western Uganda at the foot of Mt.Rwenzori with Bakonjo as the main inhabitants.  At the time we were launching the project, different reports showed, Bakonjo were marrying off their daughters of ages between 12 and 14 due to a number of reasons among which were:

the impact of Allied Democratic Forces’ (ADF) rebel activities that had concentrated in the RwenzoriMountains from 1997 to 2007;

poverty in most homes in the sub county;

parents’ ignorance on the value of educating the girl-child;

the effects of economic activities that had followed the construction of Fort-Portal – Bundibugyo-Lamia Road.

Implementation of the project

The start did not go as we had expected. After the initial field visit of Karangura Sub County, we were overwhelmed by a number of challenges like: the large size of the sub county; nearly all the children in the sub county were in need; the mountainous nature of the area and the parents’ low levels of education. Those challenges couldn’t allow us make any progress; we had to put all activities on halt! In addition, by that time, JFCU’s offices were only in Kampala, Uganda’s capital that is approximately 297 kilometres (185 miles) by road, and our staff could hardly speak Lukonzo, the language of the land.

Failing had not been our target. We wanted to make a change in the region. We wanted to help the girl-child in Karangura realise her life’s dream. We had to go back on the drawing board and and readjust our strategies on how we could have the Empower Project implemented in Karangura Sub County. JFCU team decided:

to seek guidance from Karangura Sub County L.Council III (L.C. III) executive on the most affected parish where two primary schools to concentrate the project activities would be selected

buy nunny goats to beneficiaries. First female off springs to be collected and offered to other needy girls

to work with the L.C. III executive to help guide JFCU staff engage in community activities

After attending the July, 2014 GlobalGiving Meeting in London, I had to lead my team to implement all we had planned. It was time to get the Empower Project implemented in Karangura Sub County! With the help of the L.C. III executive, we selected Kibwa Parish where we would specifically concentrate Empower Project activities in Mahyoro and Kibyo Primary Schools.

JFCU’s engagement in GlobalGiving activities has attracted donations that started as far as November, 2014 has provided funds that have greatly supported the project’s activities in the sssub county. Goats have been donated to the beneficiaries, scholastic materials likepupils‘ and teachers‘ text books have been donated to the participating schools, among other achievements. The Empower Project Evaluation Report of January, 2017 gave us an insight that the project is doing well despite the earlier challenges and those that we are still to address. .

Our effort to make a positive change in Karangura Sub County constantly reminds me to ponder on Barrack Obama’s words:

Making your mark on the world is hard. If it were easy, everybody would do it. But it’s not. It takes patience, it takes commitment, and it comes with plenty of failure along the way. The real test is not whether you avoid this failure, because you won’t. It’s whether you let it harden or shame you into inaction, or whether you learn from it; whether you choose to persevere.


Attachments:
‹ 1 ... 22 23 24 25 26 27 28 29 30 ›
WARNING: Javascript is currently disabled or is not available in your browser. GlobalGiving makes extensive use of Javascript and will not function properly with Javascript disabled. Please enable Javascript and refresh this page.