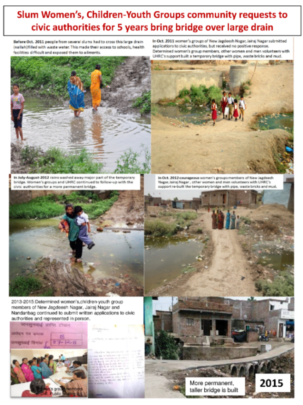 Trained women’s groups submit community petitions to civic authorities. Through their efforts, during 2014-15-

Slum maps made by resident women and children groups help to a) Ensure that no family is left out from entitlements; b) Track access to Immunization and ANC; c) Help providing service linkage to recent migrants. With help of such maps, during 2014-15

125slum women-groups across 400000 slum population in Indore/Agra save regularly and provide low-interest loans to members and other needy families.

Attachments:
‹ 1 2 3 4 5 6 7 8 9
WARNING: Javascript is currently disabled or is not available in your browser. GlobalGiving makes extensive use of Javascript and will not function properly with Javascript disabled. Please enable Javascript and refresh this page.