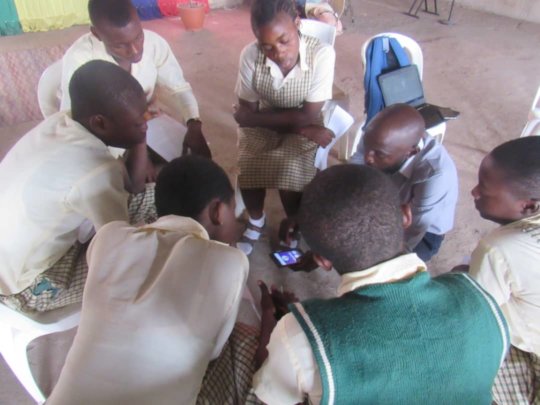 Demonstrating how to use the MyQuestion Service

The My Question and Answer Service has continued to provide sexual and reproductive health information and referral services to adolescents and young people in Nigeria. The service covers issues on sexual abuse, sexuality and sexual orientation, family planning and contraceptives, puberty and body changes, HIV and AIDS among others.  However, there are certain issues and harmful traditional practices that affects adolescents sexual and reproductive health. These issues include School Related Gender-Based Violence, Female Genital Mutilation, and Child Marriage. According to the UN, Nigeria is the 11th highest nation in the world for number of child marriages. Nigeria also has the third highest absolute number of child brides in the world of about 3,538,000 (UNICEF).  Findings from the Nigeria Demographic Health Survey shows that 44% of girls in Nigeria are married before their 18th birthday and 18% are married before the age of 15. Nigeria also has the highest absolute numbers of Female Genital Mutilation worldwide accounting for one-quarter of the estimated 130 million survivors of FGM in the world (UNFPA 2015). All of these issues are reinforced by sociocultural and religious beliefs, gender norms and stereotypes. reinforce.

With the aim of addressing the challenges that adolescents and young people face with regards to SRH and gender-based violence, the My Question team carried out   focused group discussions with 60 in-school and out-school adolescents and young people (AYPs) in FCT, Benue, Cross River, and Kaduna States. The aim of the focused group discussions was to get the views of the AYPs on the challenges they face around these issues, seek for more ways by which they can be reached with information especially on school related gender-based violence, female genital Mutilation, and child marriage.  During the meeting, young people shared their concerns particularly on the different forms of violence AYPs experienced in and around school affects them. They also mentioned the forms of violence perpetrated by teachers and  their fellow students and places where these acts take place in and around the school environment.

Example of the school related violence the young people mentioned were

“Domestic labour where students are asked to weed the farms of teachers.”

Just to mention a few.

Also, from the discussions we learnt that young people do not see FGM as a harmful practice but rather as a normal cultural practice which they referred to   as female circumcision.

With the information we got, we are   updating our Frequently Asked Question for the My Question service platform to ensure AYPs are provided with accurate information. Also, during the period under review, in a bid to expand young people’s access to SRH information, we made several posts on SRH/HIV and SGBV issues where an average of 360 young people is reached weekly. We also sent out 10,000 bulk SMS messages with educative information on these issues and featured in radio programmes to create awareness on FGM and School Related Gender-Based Violence. In this quarter, we answered over 5,800 questions from young people. Also in this quarter, we hosted the MyAnswer quiz competition on FGM and  24 adolescents and young persons won the prize.

The MyQuestion team will continue to use its technological platforms to debunk myths, break the silence around sexual violence, provide correct and useful information to adolescents and young people in Nigeria to make informed decisions, protect themselves from harmful traditional practices and leave healthy and improved lives.

Happy New Year to you all... I appreciate you all for always being available for us. Female 22 Uyo.

We are also sending this appreciation to our donors for their good work and support for the MyQ service. 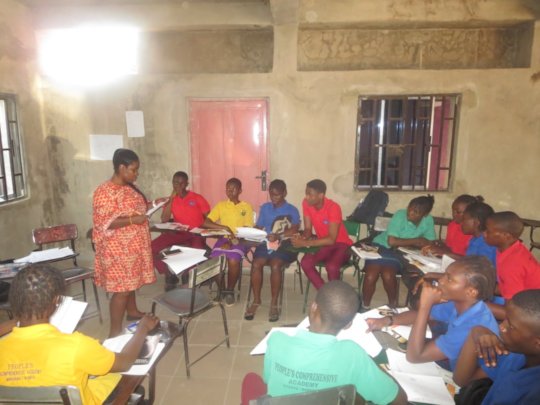 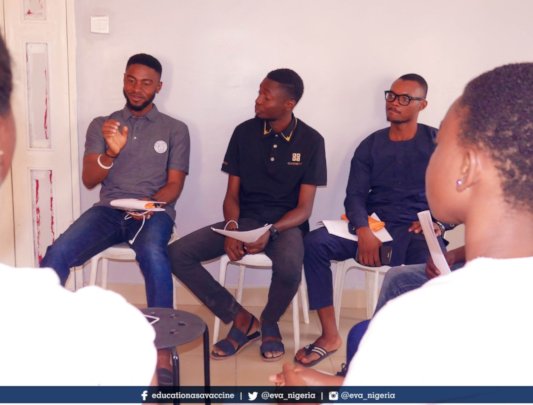 Young People Out Of School Sharing views on SRGBV
Nov 30, 2018 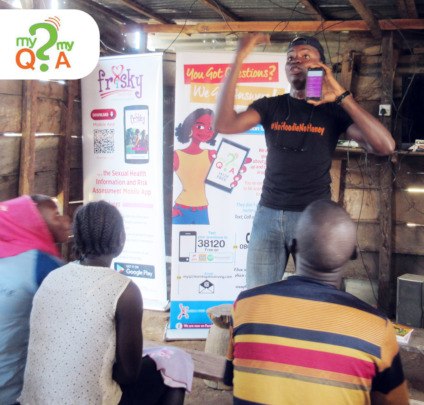 Our team providing information in an outreach

Yippee! more and more people are engaging on our Facebook platform.

There are a lot of young people on social media and we have been taking advantage of the platform to reach young people. It is one thing to have followers on Facebook, It is another to engage them profitably to build their capacity, inform and educate and, to also help them make informed decision particularly on sexual and reproductive health.

In this quarter we put a lot of effort to engage young people, through quizzes, busting myths, knowledge test and general information, using local trending hashtags and gist. This method helped us reach more adolescents and young people and get better engagement when we compared to last quarter. More young people now use the MyQuestion and My Answer Facebook platform to ask questions and chat with a counselor. The information and post cut across relationship, body changes and pubertal concerns, sexual and reproductive health including HIV. Young people tend to engage more when we share post on relationships.

With a Facebook fan base of  over 17,700 followers we have been able to promote health seeking behaviour among adolescents and young people. We have observed a steady increase of about 26% in engagement of users on our Facebook page and these are young people between the ages of 13 -24years which indicates that the platform is engaging its target audience. And a 6% increase in adolescent girls and young women who follow our page. When we compared this quarter with the last quarter we have a 68% increase in the number of people who liked our page daily and more that 900% increase in the number who engage with our daily post.

All these were made possible through your generous donations and support. Thank you! 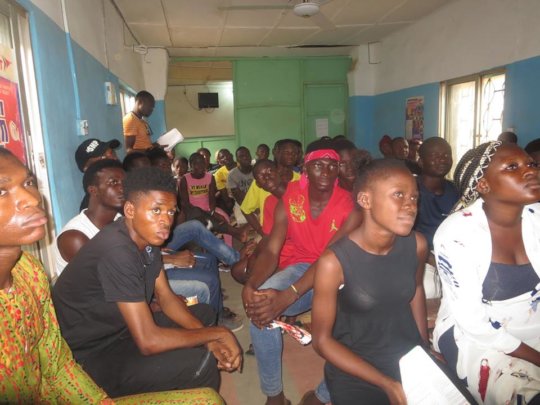 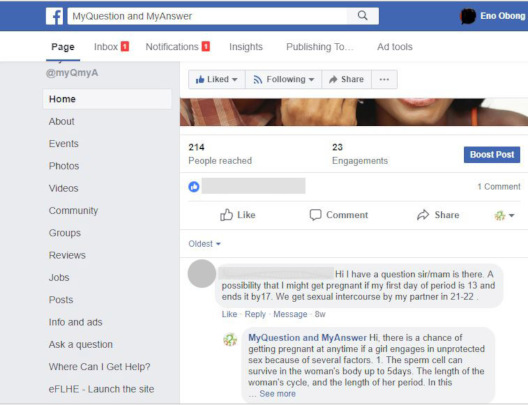 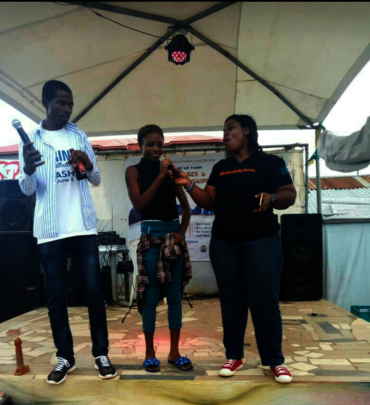 A young girl responding to question

We are always very excited to work for and with young people to improve their quality of lives. And because its August we are more excited because we get to join the globe to celebrate young people. 12th of August every year is celebrated as International Youth Day, the theme of this year is "Safe Spaces for Youth". Young people are unique, diverse and require safe spaces to freely express themselves in every sphere of their lives. Safe spaces will not only improve the quality of lives they live but would also encourage positive engagement and development. For us we use mobile technology to create safe spaces for young people. The Mobile Question and Answer Service is an ideal safe space that allows young people to express themselves, ask any question that concerns their body changes, sexual and reproductive health without fear of being judged or criticized. Following this year's theme for the International Youth Day we carried out several activities in our different field offices that engaged young people in several ways through soccer and edutainment, providing them with the safe space to display their talents through dance and musical performances, while providing them with accurate sexual and reproductive health information. We also had condom demonstration, demonstrating the right way to use the male and female condoms. It was not just all talk, the young people had fun, dancing and reciting poems. There was also quizzes, and incentives to motivate participation. We also demonstrated how the My Question and Answer Service could be used to access sexual and reproductive health information making them understand that whatever issue being discussed is kept safe. Besides, providing them with information there was also free HIV counseling and testing services. The young people were curious and had questions to ask, this gave us opportunity to clarify all their concerns. 124 males and 56 females were reached with sexual and reproductive health information and 48 males and 26 females were took the HIV test.

"Thank you for coming, girls in my community face a lot of challenges and I have really wanted to talk to someone, I am happy I have been able to talk to you". Justina 20years, Abuja.

Through your support many more young people are accessing sexual and reproductive health information, from our technological safe space. Thank you so much.

We will continue to reach out to more adolescents and young people, providing them with safe spaces tthat encourage health seeking behaviors. 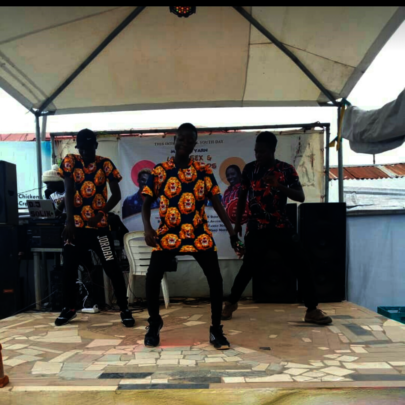 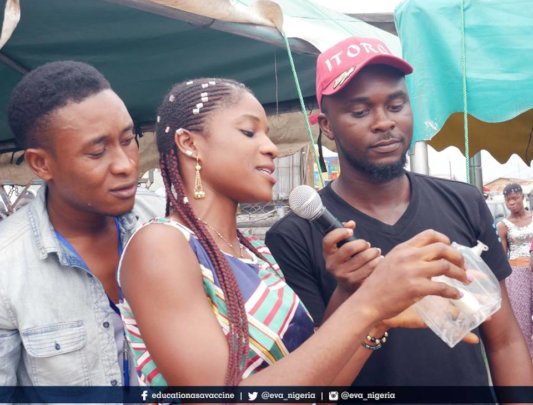 Female condom demonstration by a participant
‹ 1 ... 3 4 5 6 7 8 9 10 ... 12 ›
WARNING: Javascript is currently disabled or is not available in your browser. GlobalGiving makes extensive use of Javascript and will not function properly with Javascript disabled. Please enable Javascript and refresh this page.