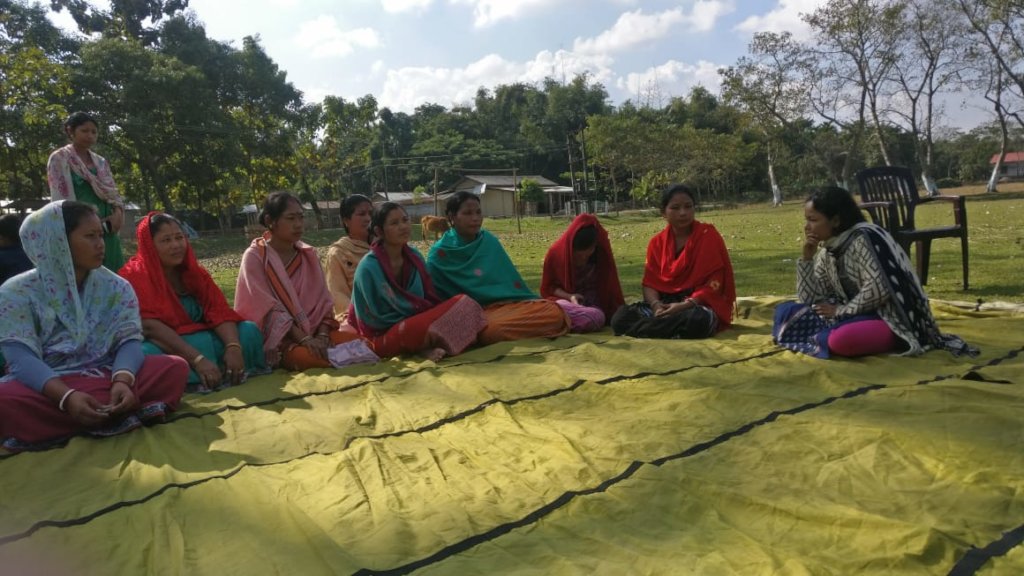 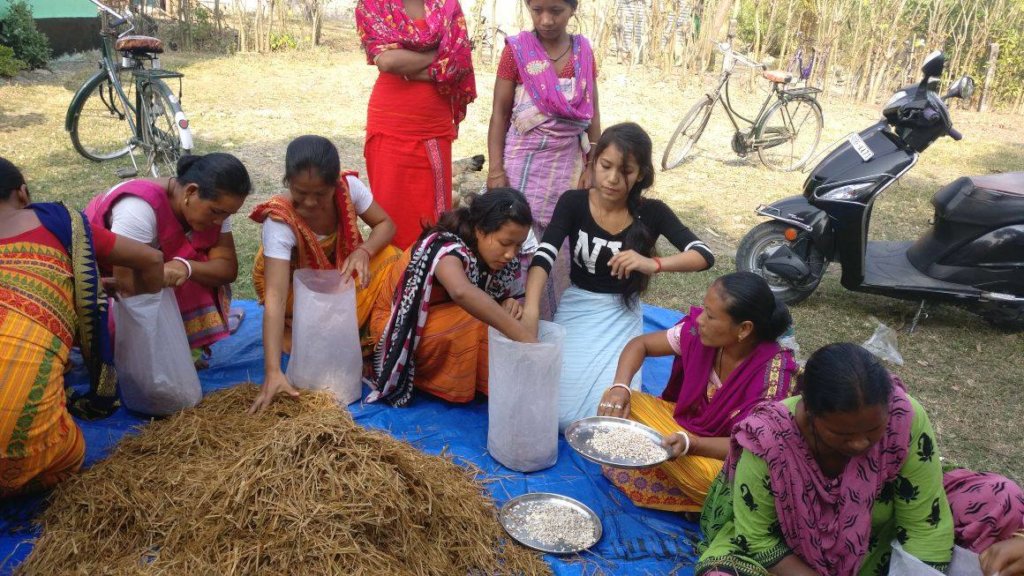 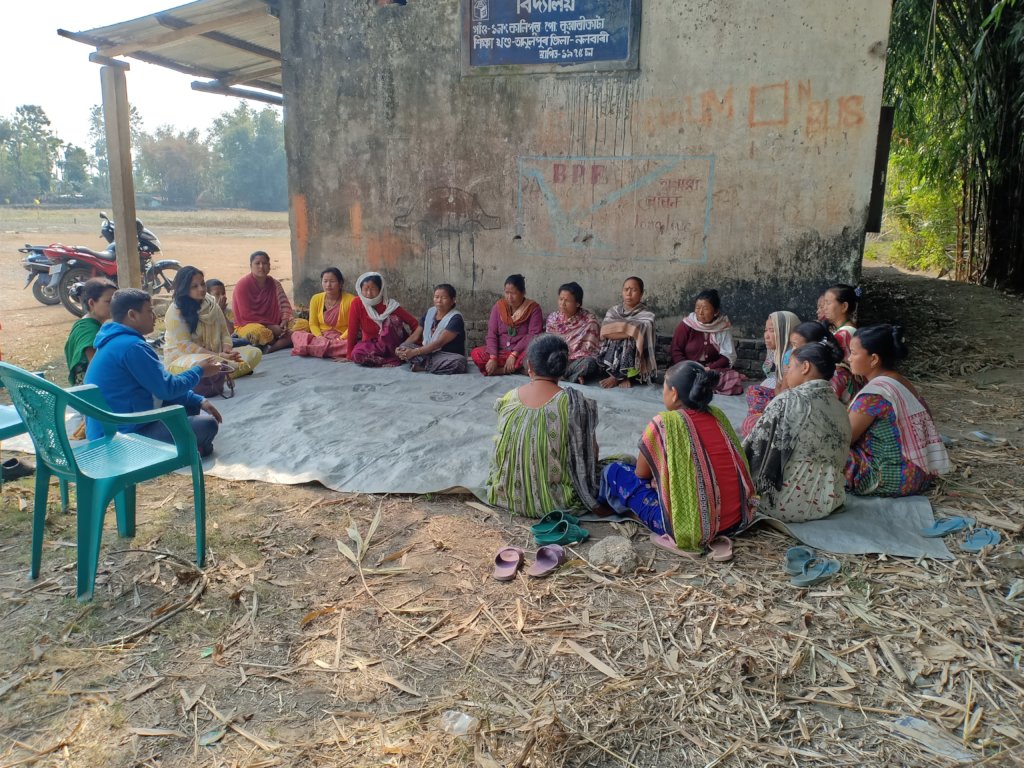 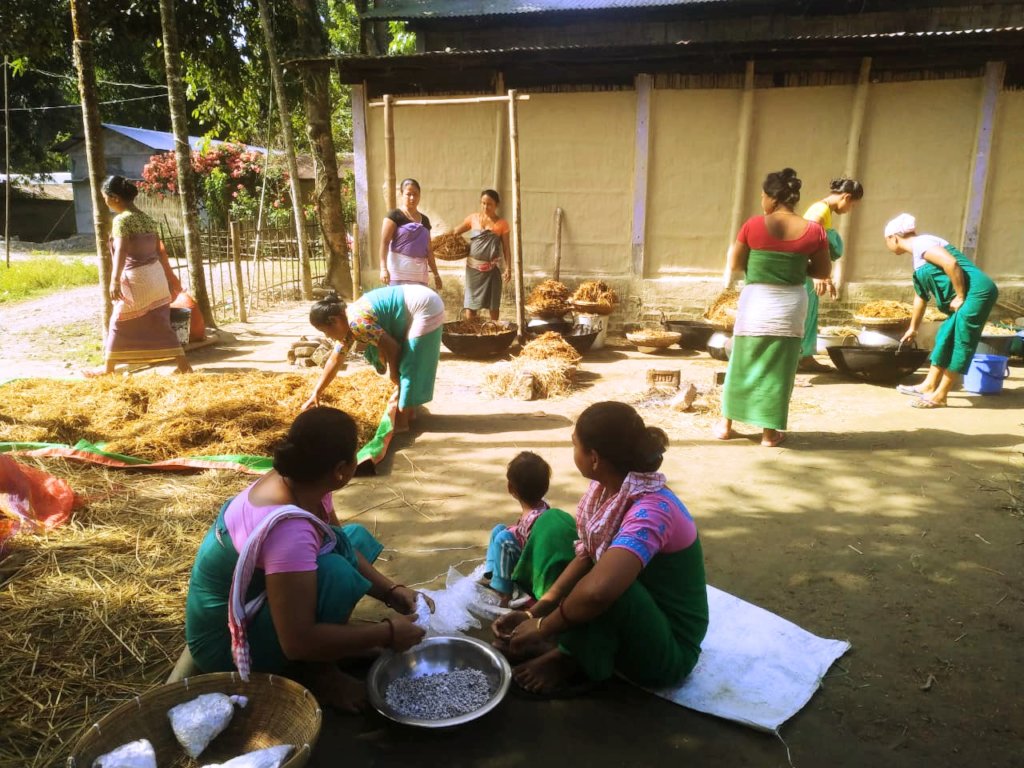 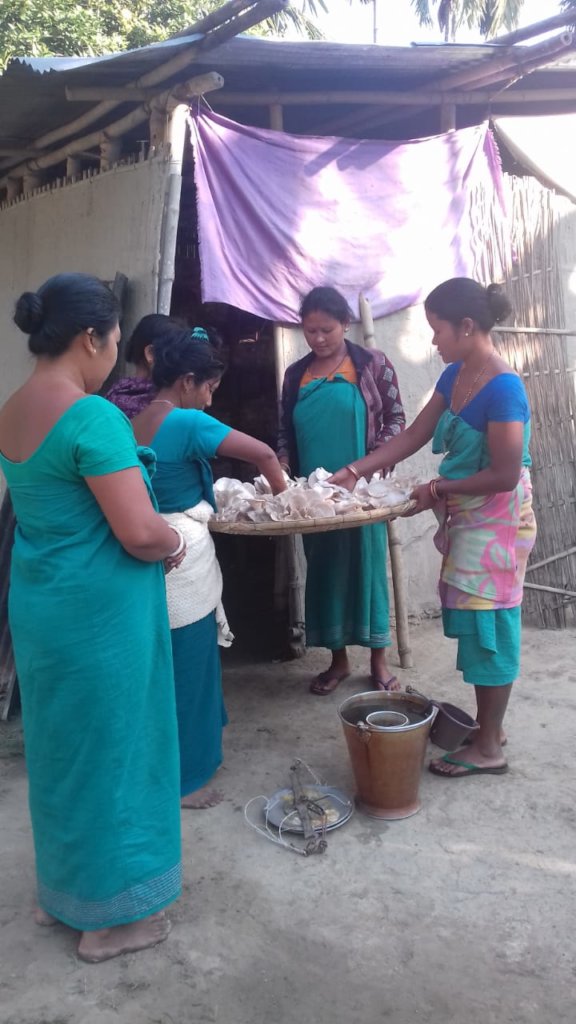 Due to lockdown in India farmers were cut off from the market for long time. The need of crops diversification in off-season of mushroom is much needed for the sustainable livelihood of the farmers. Again active action for market linkages and mobilizing the women groups in a more organized way was one of the areas of work was identified during implementation.

In the month of June when the lockdown was a bit relaxed, we planned the process of mobilizing women into a Farmer Producer Company (FPC). Due to restriction in mobility, we could not reach out to the community for the mobilization process.

During the month of July community meetings started for FPC formation. FPC formation meeting was conducted on 2nd July and with everyone’s agreement, it was named Milanjyoti Agro Producer Company Limited. Ten women farmers were nominated and selected as members of the board for the FPC.

In the month of September registration process of FPC initiated and we could successfully register the FPC legally. We conducted a need assessment in the month of September for crop diversification and possible other farm activity. After the need assessment it was decided that black paper, ginger, turmeric cultivation will be carried forward with the women farmers for sustainable livelihood.

We have planned capacity building training on FPO governance, horticulture for next quarter.

In the month of January, the production and sale of mushroom from all the villages continued and the total production for the season from November to February was arrived at 1282kgs and total amount received by the women mushroom growers from the season arrived at 141,640 INR. Taking into consideration the frequent financial transactions as well as the need to maintain proper accounts, a capacity building workshop for the community organizations were planned and executed in the month of February in association with the Finance Team of FST. Our women collective representatives also participated in a regional North-East Trade Facilitation Fair wherein they were exposed to various innovations and practices prevalent in the states in terms of sustainable livelihood practices.

Also, in the month of February, our community organizations began planning for the post mushroom cultivations season. They decided to engage in cultivation of Papaya, Lemon and Black pepper which can be seen as an alternate means of livelihood with their existing practice of paddy and vegetable cultivation during the mushroom off-season. However due to the pandemic of COVID 19 and its related lockdown across the country, we couldn’t carry on with the planned programs.

We plan to carry on with our activities once there are relaxations in lockdown and with due consideration of safety measures of social distancing and sanitization practices.

During this period of lockdown, understanding the plight of the daily wage labourers as well as the vulnerable families, FST engaged in relief measures in association with the community mobilizers and grassroot organization in the project villages. We were able to reach out to 120 families from the 5 villages of Baksa block with essential items such as rice, potatoes, pulses, vegetable oil, salt and hygiene materials such as soap, washing powder and disinfectant.

The production for the season begins 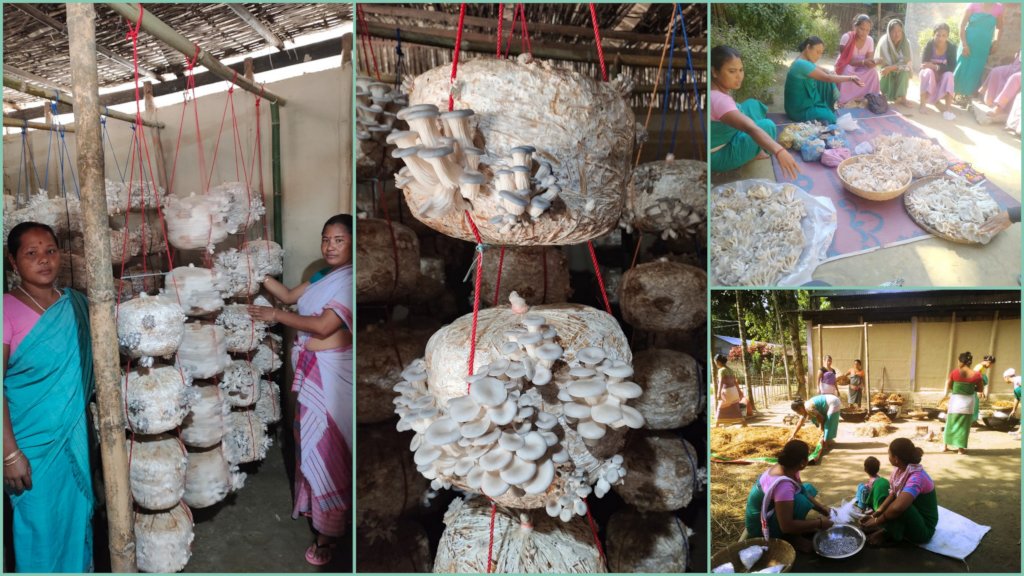 In the last two months, the women collectives started preparation of the cylinders. On receiving the spawns they ordered, they started with the production process. They had to wait for some more weeks to receive the spawn, since it was festival time in the month of October. Unlike previous year, this year there was no considerable damage and the mushroom grew productively. The weather was favourable and the mushrooms sprouted well. The following are the highlights of production.

Till nows, the project has not only boosted the production of mushroom and their livelihoods, but also their confidence and self-esteem. The women of the village are becoming happy, enthuasiastic, vocal and are willing to more work to improve their lives and the village as well. There is a "no looking back attitute" developed in them and more women of the villages are inspired and joining in. 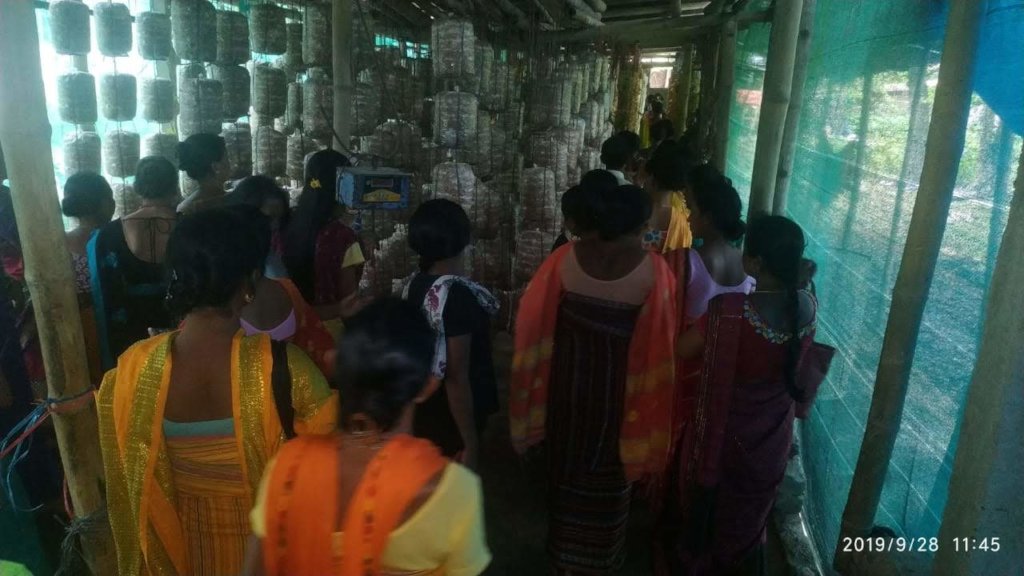 Our project aimed in enabling towards livelihood to marginalised women farmers of the Indo-Bhutan Border, in the Baska district of Assam through Mushroom Cultivation. The women of the 6 villages of the district through the intervention and extensive handholding of Foundation for Social Transformation (FST) has capacitated themselves towards economic development through cultivation of mushroom and selling them in the local market. During the last cultivation season, they cultivated and sold 700 kilos of mushrooms even after facing challenges due to weather condition. During the beginning phase, FST provided the spawns to them in 14 SHG’s and 4 village level collectives were formed.

In the meantime, Mushroom cultivation has gained popularity as a livelihood opportunity among the women in the villages. Women showed utmost interest in taking up the activity and contributing to the family’s income.

During the last two month, members of FST visited the villages and interacted with the women. The women were enthusiastic and positive towards their economic enhancement through this livelihood opportunity. During the discussion, it was seen that other women were also very much keen in learning the activity. Also, the last year’s damage due to weather and their lack of knowledge in few aspects was a reason they needed an exposure trip to a commercial mushroom cultivation farm.  Accordingly FST organised training cum exposure trip to a full-fledged farm in another district. The women had a very deep learning exchange and their skill on the process was enhanced. Post the exposure they were highly motivated and organised. 20 more women came forward to join this activity and 1 more collective of women has been formed from two villages. They ordered spawns for the current cultivation season. FST contributed half of the amount for the ordered spawns. The enthusiasm and preparation for the cultivation season is very high. Some of the women ordered for spawns separately along with the collective’s requirement. The cultivation process will start from the next month. 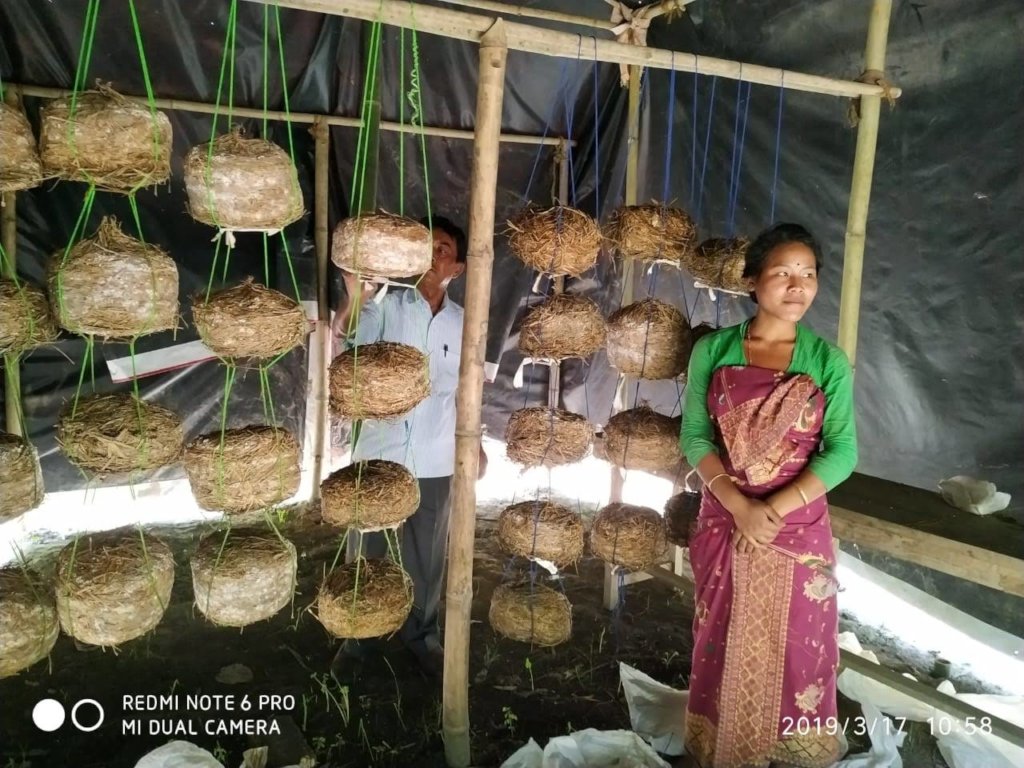 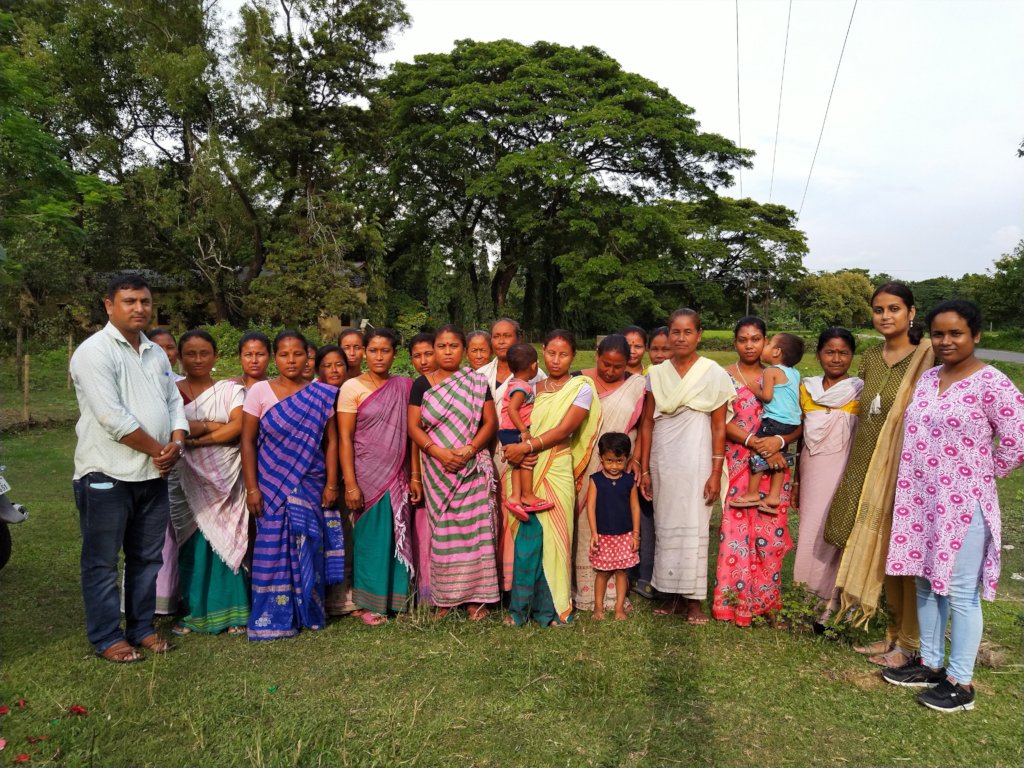 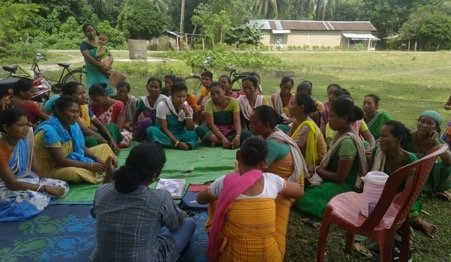 The project began with the plan of assisting 200 mushroom growers from six villages of Baksa district. Post-production and selling of the mushroom produced till the month of May 2019 in namely Kalipur, Matangapar, Natun Howly, Auzurguri, and Amlaiguri villages; the women over these past three months have been engaged in forming their community organization at the village level. As they plan for the next cycle of mushroom cultivation, taking into consideration the challenges, they have come together to form collectives beyond Self-Help Groups. Believing and facilitating in FST’s approach of community philanthropy, the women from these villages have formed five community organizations namely:

-       Kalipur Mahila Samiti at Kalipur village with a total number of 40 members.

-       Trinayan Mahila Samiti at Natun Haoli with a total number of 62 members.

-       Milan Jyoti Mahila Samiti at Motangapar with a total number of 41 members, and

-       Udangsri Mahila Samiti merging the Ahuzarguri and Amlaiguri villages with a total number of 40 members.

Thus, for enhancing discussion on their livelihood opportunities, market linkages as well as networking with the other stakeholders of the village such as the Village Council Development Committee, that works as the village level state institution; these women collectives have come forward to plan and have a dialogue both within themselves and with the external environment. They have focussed in their community organization meetings on increasing the number of women into mushroom cultivation, planning on market linkages beyond the immediate village vicinity, exploring ways to develop in this livelihood activity by exposure visits to established entities on mushroom cultivation. Moreover, the women collective is also engaged in efforts and actions towards their village development in terms of taking up infrastructural issues on roads and connectivity, access to rights of the people from the community and so on.

Major work is done in the last quarter:

Donating through GlobalGiving is safe, secure, and easy with many payment options to choose from. View other ways to donate
Foundation for Social Transformation - enabling north east india has earned this recognition on GlobalGiving:

GlobalGiving
Guarantee
Donate https://www.globalgiving.org/dy/cart/view/gg.html?cmd=addItem&projid=38465&rf=microdata&frequency=ONCE&amount=25
Please Note
WARNING: Javascript is currently disabled or is not available in your browser. GlobalGiving makes extensive use of Javascript and will not function properly with Javascript disabled. Please enable Javascript and refresh this page.