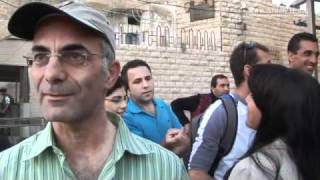 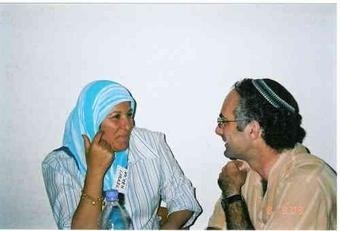 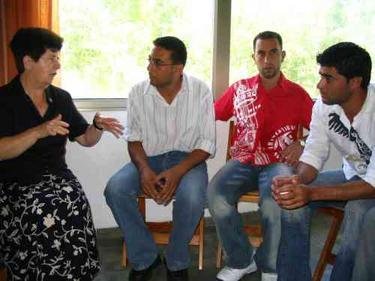 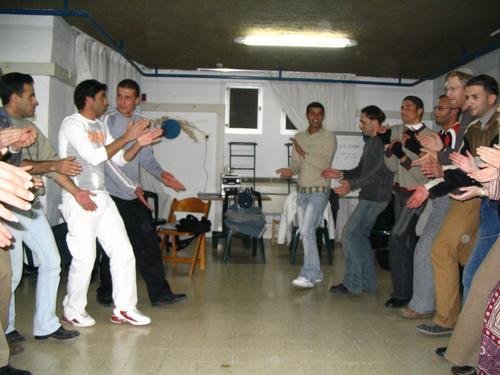 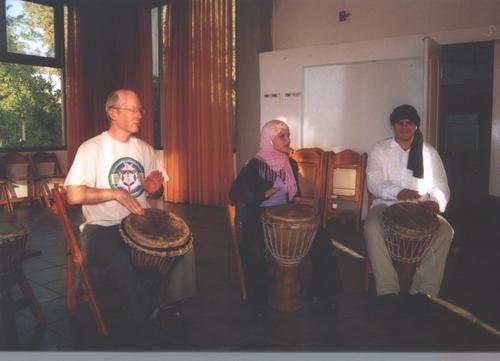 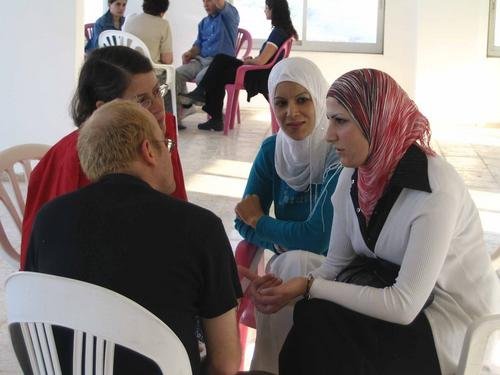 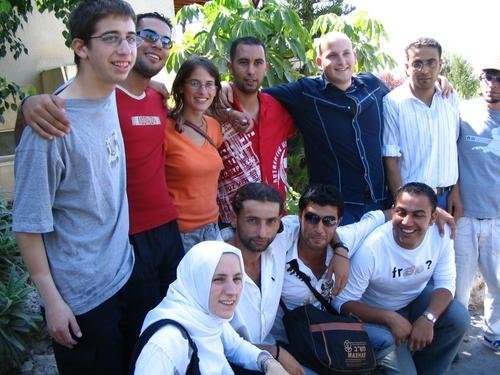 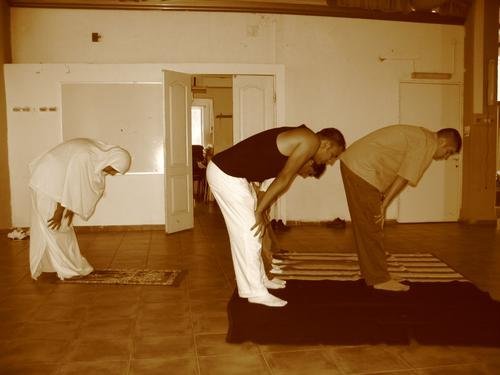 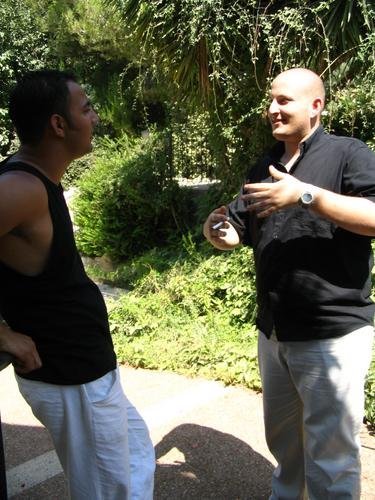 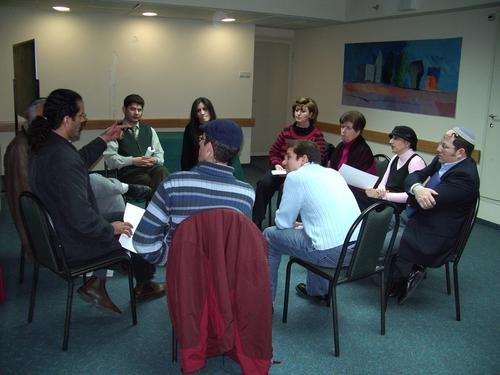 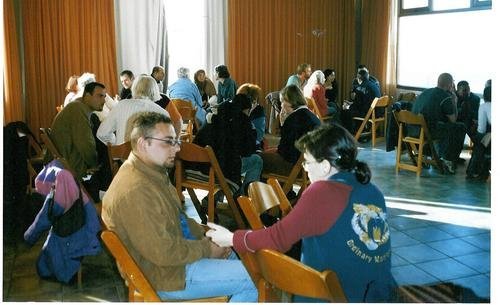 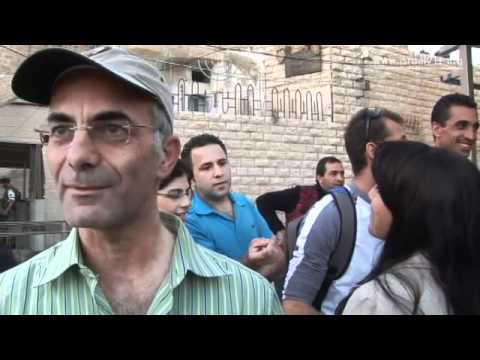 The group met in Hebron with fifteen participants.

The theme for the encounter was repentance.

Several members said that the mere activity of our group is by itself a form of repentance – restoring the good relations between neighbors.

Gideon explained the concept of Teshuva in Judaism and said that Rabbi Kook told us that repentance is not only about regret for sins but also about bringing light to reality.

Ashraf responded that in Islam it is very similar: anyone who did wrong has to return to Allah. He quoted Sheikh Shahrawi who said that the Muslims are in difficult situation because they are not true believers and should return to Allah. We all should have good hearts of love to others.

Issa added that we wish to build a good future for us and for our children, a future of peace between neighbors.

The Circle of Light and Hope - 2 encounters

Subject: Pain and Suffering in the 3 Abrahamic faiths.

The group met in Tantur with 11 people and started by introducing the attendees to each other.

Then Fransis presented the subject from the Jewish perspective. He said that the pain and the suffering that man bears will be compensated in the day after by a reward from God.

Sari followed and spoke about the Christian point of view and said there are nature-induced pains and human-induced pains. Jesus Christ had suffered in spite of he had not done any harm to others.

Taleb spoke about the subject saying that God is always fair, compassionate and loves his creatures all the same, and if something painful happens to the human being God wants us to be patient and always praise God in all cases; he will never leave his believers suffering.

All attendees participated in the talk and all were happy to hear others opinions.

The topic this time was one that I don’t think we have ever looked into: Work. What rights do workers have? How do employers have to treat workers, and what obligations do workers have towards their employers? Is there a right to work? Is there a minimum amount that workers should be paid, and what defines that amount? How much rest/vacation time is due to workers? A participant from each faith shortly presented the subject from their religions’ perspective and then attendees participated in a friendly exchange.

In our last encounter in Gush Etzion Junction, 6 Palestinians and 8 Jews met together in to talk about peace and future.We have known each other for more than a year now, and we meet twice a month, building a great bridge between us. Today we talk about the Yeshiva student Dvir, who was killed around a month ago next to Efrat southern entrance. As young men, we agreed that we are against violence and we want both of us to live as any other people in this world . We raised a lot of questions that we will continue to discuss in the next encounters.

In this encounter for the Jewish and Palestinian youth, we had an interesting discussion.

The predefined topic of Judaism and Zionism found an interesting twist after Mousa asked a question about the use of "Judea and Samaria" vs "West Bank". And so a discussion about identity and the names we give to places in the Holy Land started... How names define our connection but may seem to deny the others. How does one solve this? Are there ways of "being sensitive" without giving up on the language and names which are our stories. Thanks to Mousa and Andye who both raised important questions and challenges and showed that, as Andye noted when he introduced himself, we have a good basis of personal relationship that will allow us to deal with the issues of identity.

After a long break, the group resumed its activity with new Jewish participants. At the set time, Yaki came with Yakov to the encounter place, finding Jihad, Ahmed and Ismail already waiting. By the time Yehuda came we were already immersed in acquaintance conversation – in Arabic.

We talked about the encounters and agreed to aim for an encounter every 1-1.5 month, with a theme selected before. In the long-run we will include also women and children but for the time we start with men and on Fridays.

An interesting point that came during the conversation was the disagreement in the Muslim world about the date of the Holiday. I shared about a similar disagreement in Judaism when Raban Gamliel ordered Rabbi Yehoshua to visit him with his stick and bag on the date that according to his calculation is the Day of Atonement. With heavy heart Rabbi Yehoshua accepted, in order for the authority of the religious ruling to remain accepted by all.

A small step with big hope.

The encounter didn’t start as expected because the taxi that was supposed to pick up the Palestinians was late. At the beginning we went through the names (some names have changed from the Israeli group) then we decided that there isn’t much time to do the discussion as planned regarding the subject of The Oral law and Traditions, so we decided to do a brief introduction of the subject from a Jewish perspective and shed some light on the complexities within this topic, and to ask the Palestinians if they have similar teachings. The Palestinians talked about the subject and most of the time we asked them questions about Islam in general, and about their social circle in particular. We received some interesting answers (most of the conversations were in English, parts of them were translated by Oday from Hebrew to Arabic and vice versa).

They also asked us questions about our basic religious duties at the end of the discussions. Someone answered that there are big arguments among the Jewish people revolving around the question: What are the most important religious duties. However, we explained to them the idea of the Ten Commandments and we found out that there are big similarities between the two religions when it comes to prohibitions and permissible in the Ten Commandments.

We finished the day with a lot to reflect on for next encounters where we will discuss the subject of the “design” of the Torah\ Islam, as we planned.

We had the encounter in Gilboa, it was a very intense encounter and the guys were very active.

We were 15 Palestinians and 6 Israelis.

I translated for both of them. We discussed many issues about religions and cultures, humanity and peace coexistence.

Donating through GlobalGiving is safe, secure, and easy with many payment options to choose from. View other ways to donate
Interfaith Encounter Association (IEA) has earned this recognition on GlobalGiving:

GlobalGiving
Guarantee
Donate https://www.globalgiving.org/dy/cart/view/gg.html?cmd=addItem&projid=1520&rf=microdata&frequency=ONCE&amount=25
Please Note
WARNING: Javascript is currently disabled or is not available in your browser. GlobalGiving makes extensive use of Javascript and will not function properly with Javascript disabled. Please enable Javascript and refresh this page.