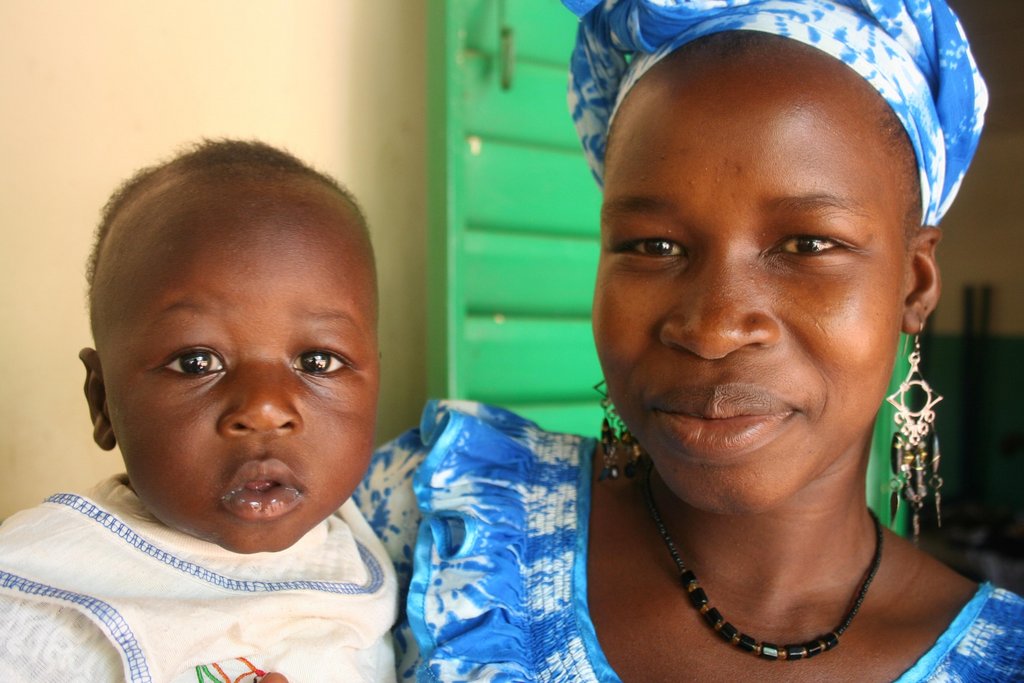 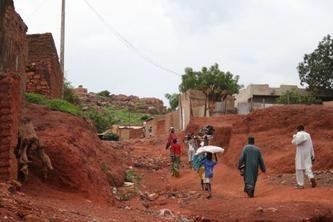 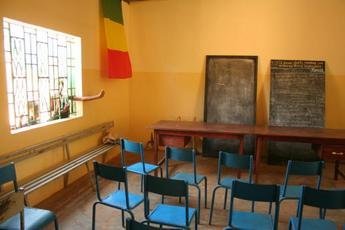 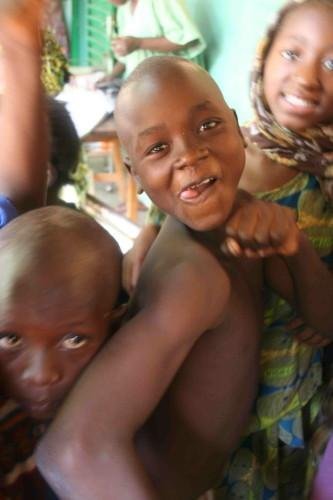 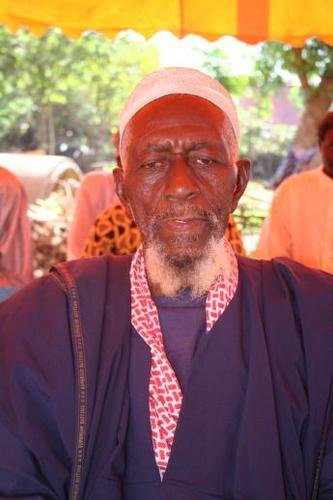 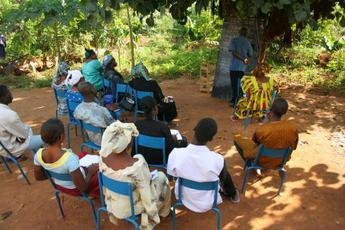 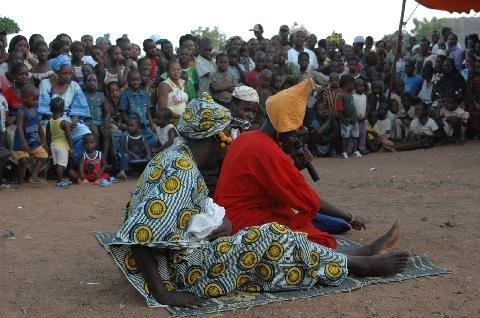 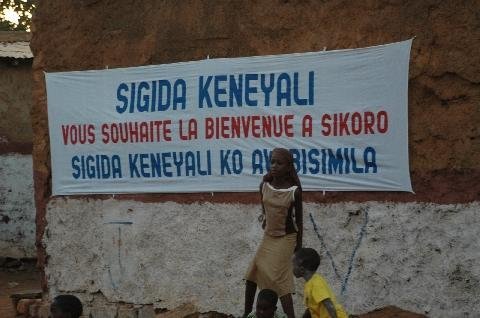 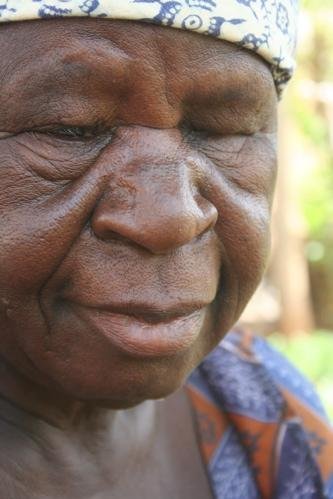 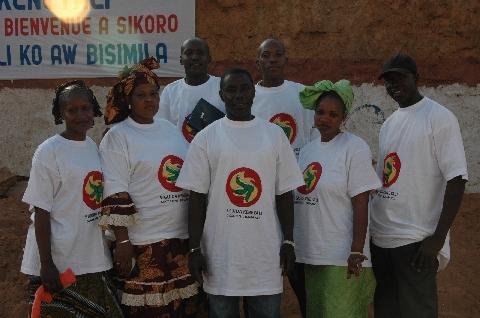 MHOP lays the first brick of our clinic and health innovation trial center! 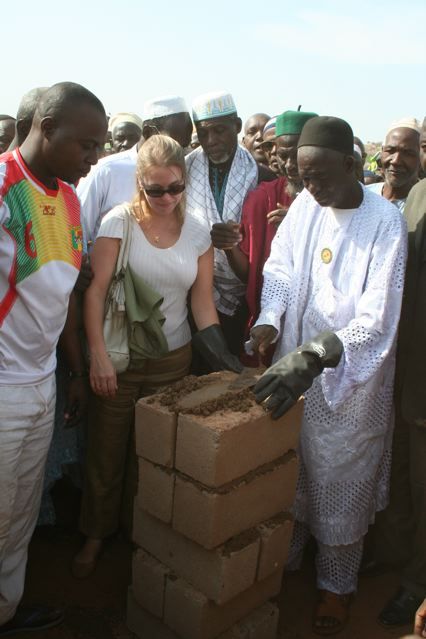 This Saturday, December 20th, MHOP laid the first brick of our community clinic to serve the residents of Sourakabougou and residents of four other slum neighborhoods to the north east of Bamako, Mali. The brick-laying was nationally televised in Mali by ORTM (the Malian Office of Radio and Television). The launch was attended by all the town dignitaries, representatives of the mayor's office, the US Embassy, and the various health structures in Bamako. Located several kilometers from paved road, but right next to the market and school in Sourakabougou, our clinic is located to maximize accessibility to the least served residents of the city. Additionally, we are forging partnerships with the FENASCOM (national association of community clinics) and the Millennium Development Goals Center of West and Central Africa to use our clinic as an innovation trial site for new health financing, leader-training, and clinical care protocols. Thank you to every donor who has made this happen, the Government of Mali, Liz and Malcolm Chace, the US Ambassador's special Self-Help Fund, and the Peace Corps (Sara Rosen). Thank you especially to the residents of Sikoro/Sourakabougou who have given thousands of hours of work to create their own health system, our Malian director, and our many interns. The clinic will be constructed in three phases: Phase 1: 6-room clinic (Opening in April, 2009) Phase 2: 6-room maternity, child health center, and external compound. (December, 2009) Phase 3: Soccer field, nutritional support garden, and outdoor education center. (March, 2010) When it is fully operational, we anticipate roughly 50,000 visits per year. THANK YOU! 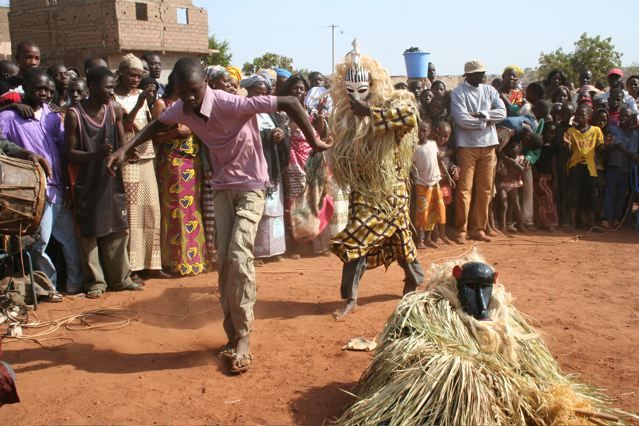 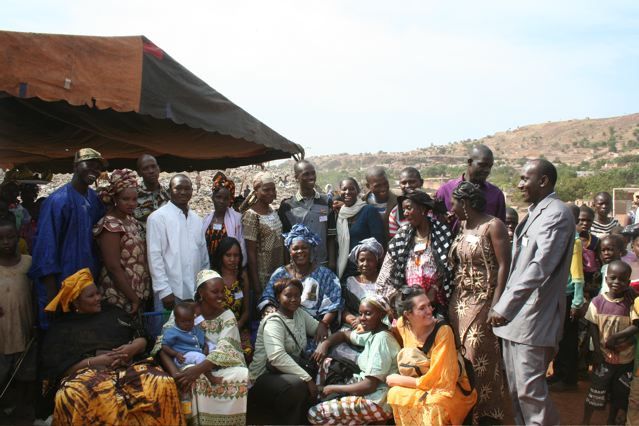 After a brick laying community ceremony on September 27th, construction of a health center for 30,000 underserved slum residents will begin! Sikoroni residents are continuing to invest in their own community with individual contributions to make up $8000 of the costs and the remaining funds will be funded through a combination of MHOP donations and committed money from the Malian government. The National Ministry for Health has at long last approved our application! We just need to complete our US-based fundraising.

The clinic is scheduled to be completed by June 2009, so Ben and I have spent the last few weeks revising a list of the medial supplies needed to equip the clinic. We met with Dr. Magdalene Togo, the ex-chief of medicine of the national hospital, at the Ministry of Health to better understand what clinic equipment we could expect to be “prise en charge” (provided by the government) and what will need to be provided by MHOP. Dr Togo immediately agreed to assist with questions during the clinic construction process and provided us with a copy of the “Liste Type Material CSCOM”, a list of equipment that is supposedly provided by the government to each CSCOM (local clinic).

After meeting with Togo, we visited several neighboring clinics, and it became clear that most CSCOMS aren’t supplied even with the “minimum” materials. We spoke with the Médecin Chefs at nearby CSCOMS to determine which equipment they saw as essential. They assisted us in creating a prioritized list of crucial equipment but most of all stressed the need for equipment to be continuously updated and replaced. MHOP clearly needs to supplement the equipment that will be provided by the government. Over the next year, our student group will form partnerships with international medical supply organizations and seek donations from US hospitals and universities to acquire high-quality equipment not covered by the Ministry of Health.

By Caitlin Cohen - US Coordinator

Progress on the Community Clinic in Sikoro is coming along, slowly but steadily!

We have elected and established the committee to oversee the clinic management after its construction, and another committee to do fundraising within the community. More than 400 people (219 registered adults) showed up to the “constituting assembly”.

We have submitted our application for the legal status of the clinic, the “ASACOMSI 2” (Association de Santé Communautaire de Sikoro 2). All the architect’s plans and engineer’s estimations for the building itself are complete, and the committees are starting the long process of collecting small taxes every month from the residents of Sikoro for their contribution the cost of the clinic. Hopefully we will have fundraised enough money to begin construction in March, 2008. We are partnered with the local government, as we believe that it is our role to foster rather than replace the public system, and we are asking the government to build an extension to the clinic in 2009. In the mean time, we continue to do public peer education on malaria and hygiene, including a malaria theater and mosquito-net distribution festival, pictured in the project gallery.

Furthermore, Mali Health Organizing Project’s peer educators have gone out into each house in the community and explained resident’s rights regarding the clinic, the process of voting for clinic committee members, and the benefits of membership (half-price consultations, voting rights). We have talked with the Imams of the village, the chiefs of each sector of the town, and other village leaders about promoting the clinic and fundraising. We are also starting to use local radio to explain the campaign and our accountability system.

We will not begin construction on the clinic until the fundraising is complete, so that the building is not harmed by rain. Thanks to all those who have contributed so far. With the money that has been given, we have a foundation (both literally and figuratively). The next few months of fundraising will be difficult, but we remain confident that it is possible to raise the requisite funds. Please help out by donating or spreading the word.

Thanks to 250 donors like you, a total of $14,627 was raised for this project on GlobalGiving. Combined with other sources of funding, this project raised enough money to fund the outlined activities and is no longer accepting donations.
You last donated to this project on

Support another project run by Mali Health Organizing Project that needs your help, such as: 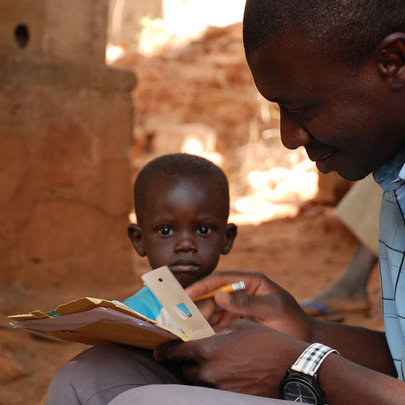 Action For Health : Empowering Communities in Mali
Find a Project

GlobalGiving
Guarantee
Donate https://www.globalgiving.org/dy/cart/view/gg.html?cmd=addItem&projid=1666&rf=microdata&frequency=ONCE&amount=25
Please Note
WARNING: Javascript is currently disabled or is not available in your browser. GlobalGiving makes extensive use of Javascript and will not function properly with Javascript disabled. Please enable Javascript and refresh this page.