Give Medical Care to Stray Animals and Wildlife 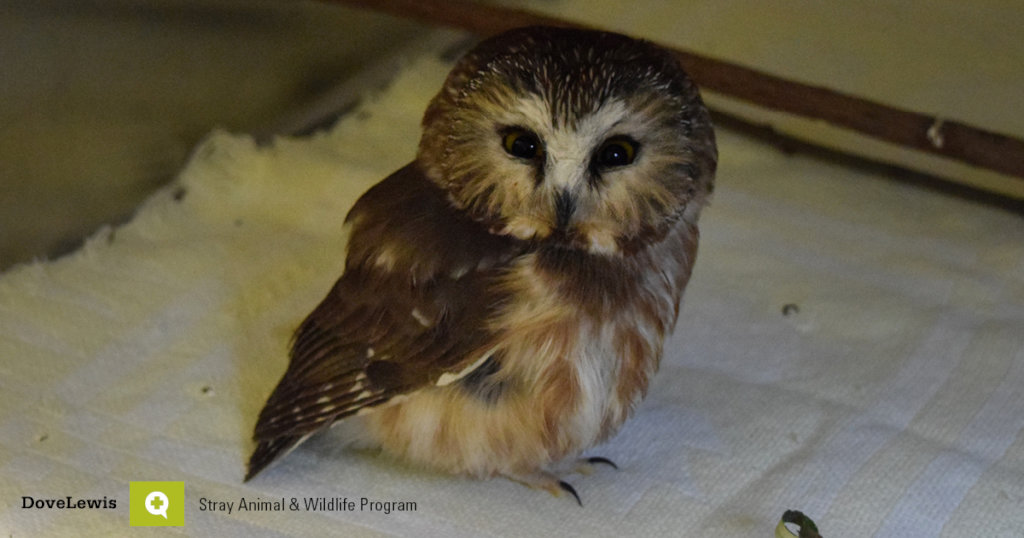 May 2018 Update from DoveLewis 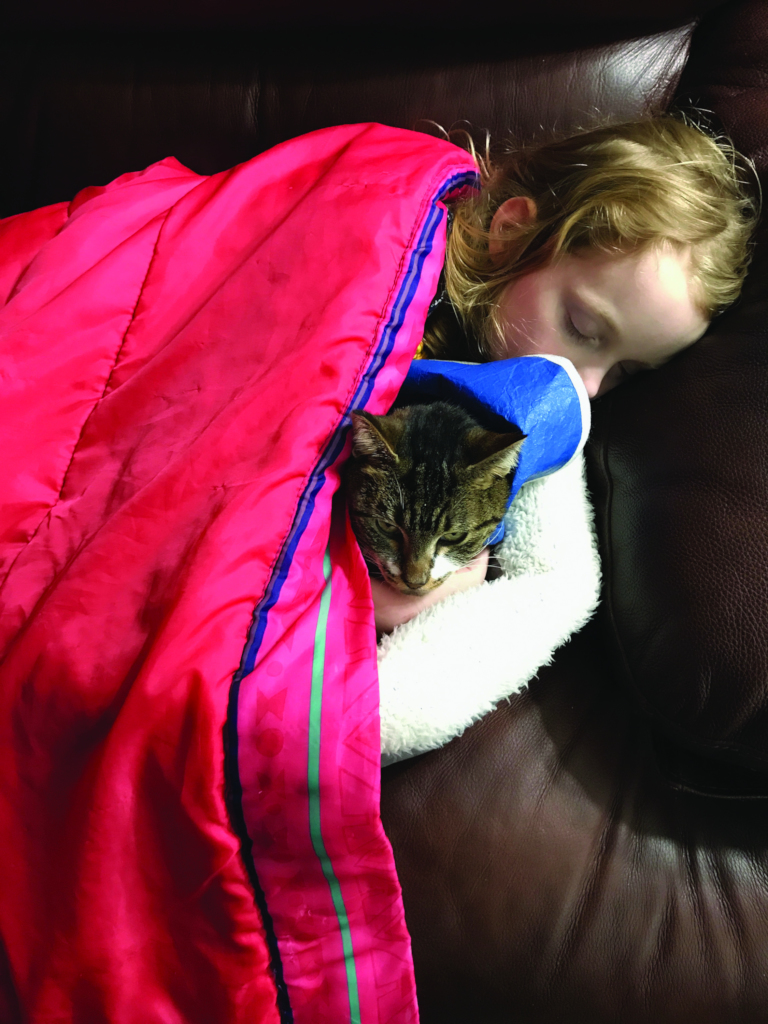 Grayson got a second chance with a loving family

Thank you for donating to our project! Here are a few stories from the hospital floor we're following:

A Last Resort Leads to a New Life

As Jenny Easley and her daughter drove home, they spotted an injured cat on the side of the road. They knew they had to help, but they weren’t sure how. They knocked on nearby doors and called neighbors trying to find an owner. Finally, a friend gave her a helpful suggestion: “Call DoveLewis.”

Our doctors got to work, stabilizing the cat and evaluating his injuries – a broken leg, a laceration, and internal bruising and bleeding. The cat received the care he needed thanks to the donor-supported Stray Animal & Wildlife Program.

But the story doesn’t end there. Jenny and her family couldn’t resist adopting the adorable feline – now named Grayson – from the Humane Society of Southwest Washington who provided follow-up care. “As soon as I scooped him up in my
arms,” Jenny said, “it was love at first sight.” Good Samaritans and compassionate donors like you ensure lost and injured animals get the emergency care they need.

Lost and Injured No More

Your support of the Stray Animal & Wildlife Program makes a difference to nearly 1,500 animals every year. A good Samaritan returned home one afternoon to find a misaddressed box filled with 17 turtles on her front porch – and the box had no return address label. Without any knowledge of how to care for turtles, she brought these strays to DoveLewis. The turtles were cold, weak and dehydrated, and in need of extensive treatment, including oxygen and fluids. Our resourceful technicians even created a makeshift terrarium with a kennel, plastic wrap and heating pads to keep the turtles warm. All but one turtle survived, and they were transferred to a county shelter for adoption. 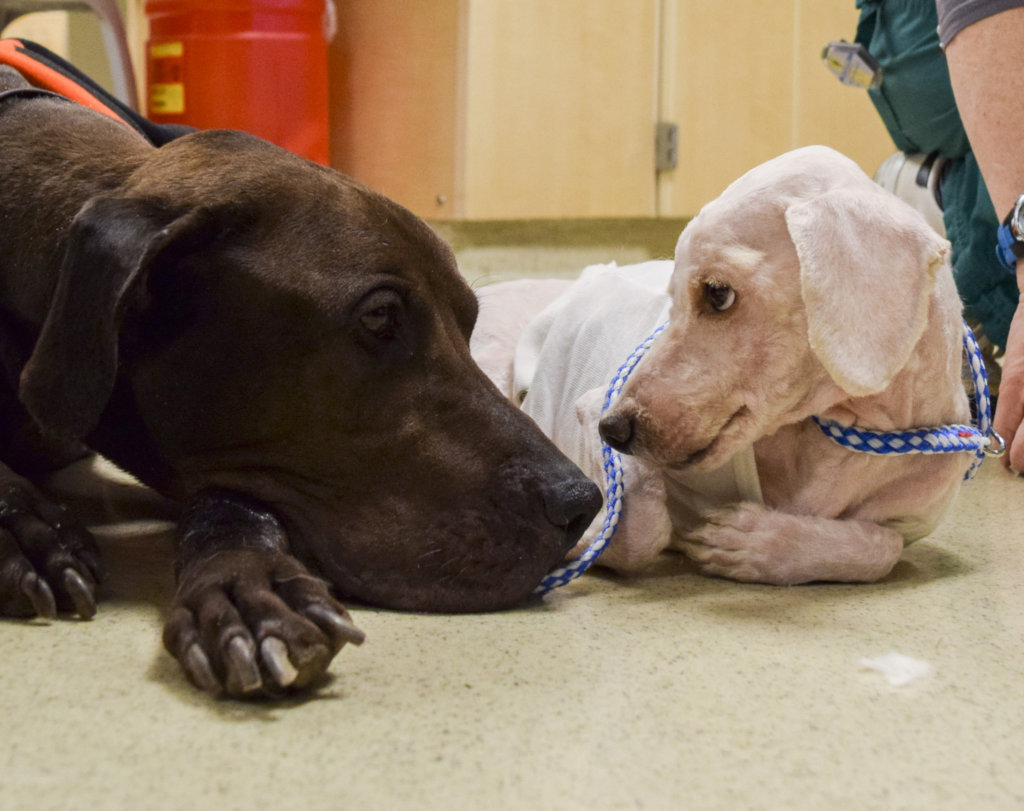 DoveLewis Emergency Animal Hospital's Stray Animal & Wildlife Program continues to be a vital community resource for people all across the Willamette Valley.

To date this fiscal year, 8.3% of our patient population have been injured stray animals. Cats make up 34% of the stray pets we see, while dogs make up 19%. Of the rest of the population, in January alone, we treated six owls, four songbirds, three pigeons, two hawks, two wild rabbits, a goose, a squirrel, a seagull, a crow, and an opossum.

We spent a total of $8,919 in January on treatment of stray and wild animals, serving a total of 898 animals. This program is 100% funded thanks to donations from folks like you -- so thank you very much! 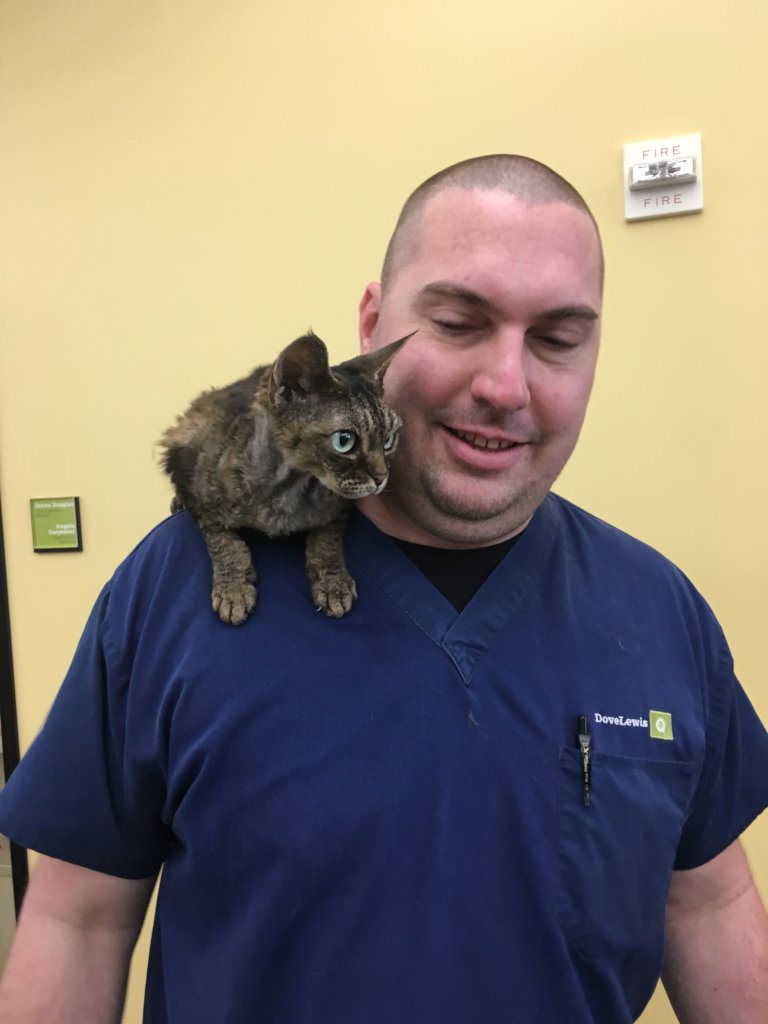 This stray cat made fast friends with our staff 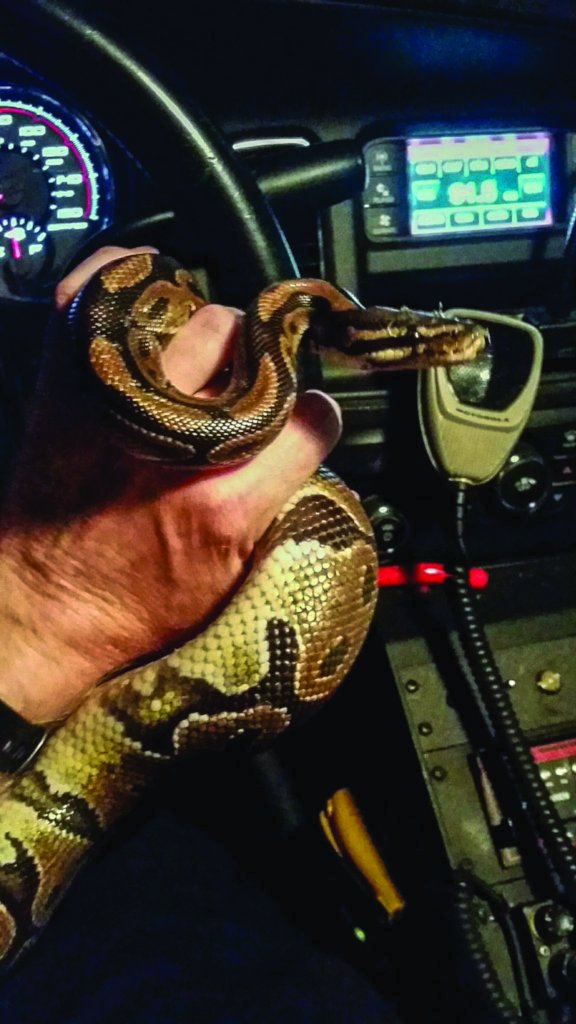 Stray python Forky takes a ride in a police car

DoveLewis treats a wide variety of stray animals and wildlife every year. This spring we had a particularly interesting client that was brought to DoveLewis after being lost for over a week!

A Slithering Stray Reunited with Family After Eight Days

West Linn police officer John Huntsman responded to an unusual call this summer – a stray ball python had hitched a ride on the car of an unsuspecting Oregon City resident. Officer Huntsman, a biology major and animal lover, arrived to find the snake wrapped around the underside of the vehicle.

He was able to detach the snake, but he had trouble finding an organization that would take such an unusual stray animal. Thanks to the donor-supported Stray Animal & Wildlife Program, DoveLewis was more than willing to care for the lost creature. On the drive to DoveLewis, the snake started poking his head out of the bag. “I ended up grabbing him, and he just wrapped himself around my arm,” Officer Huntsman told KPTV. “He seemed very comfortable.” In the meantime, the python’s family saw Officer Huntsman’s photo of the snake on Twitter.

They contacted the police department and tracked their beloved python, named Forky, to DoveLewis. It turns out that the 7-year-old snake escaped from her cage, left the house and attached herself to a neighbor’s car. She had been missing for eight days. Though missing snakes are rare, the Stray Animal & Wildlife Program was created for moments like this.

“I feel especially proud of the program when we are able to reunite pets with their owners,” said Chief Medical Officer Lee Herold. Forky’s young owner, 14-year-old Trystan Bales, thought Forky was gone forever. He was overjoyed when his mom called to inform him that his python had been found. “I am thankful to DoveLewis for taking such good care of her,” Cassandra Bales, Trystan’s mom, said. “The techs were saying that they could tell she was loved, and they were fighting over who got to take care of her.”

In the first quarter of fiscal year 2018 we have treated 536 stray animals and wildlife. This is an 11 percent increase over the prior year.

Your support ensures that any ill, injured or lost animal gets the emergecny care they need. Thank you so much for your continued generosity! 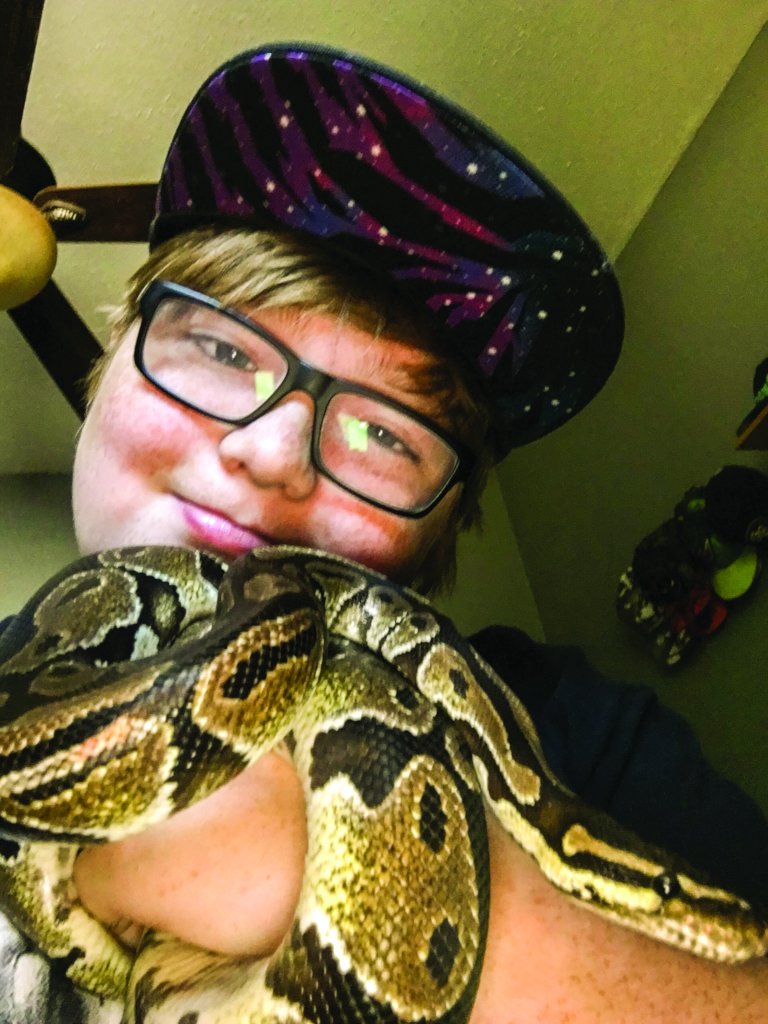 Trystan and his pet snake Forky are reunited

Stray kittens cared during the summer 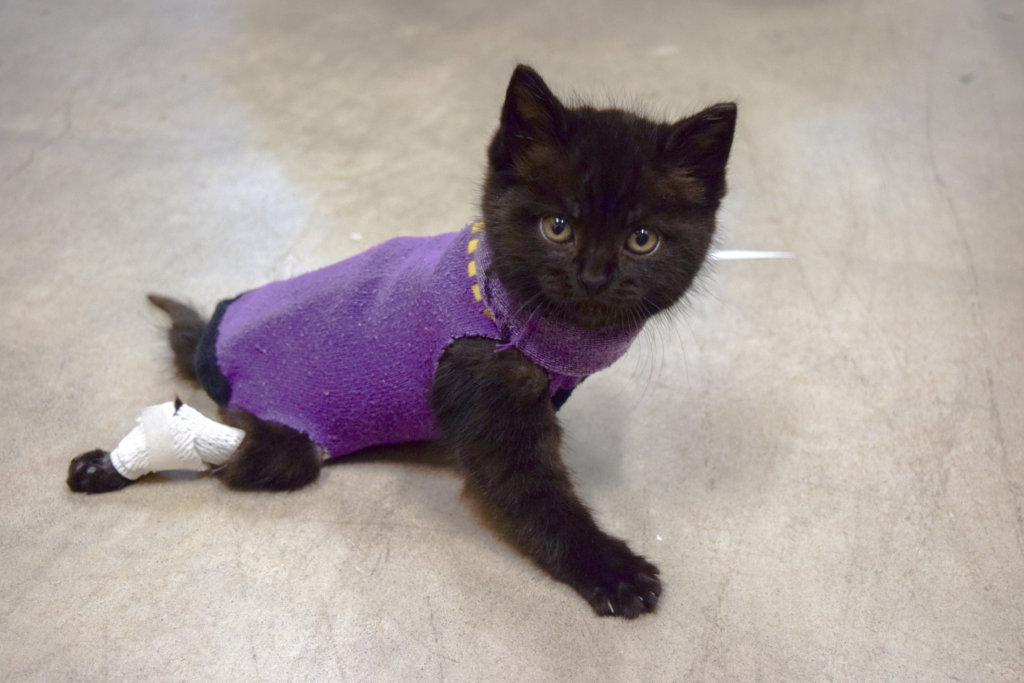 One of DoveLewis' core programs is the Stray Animal and Wildlife Program. Last year we treated nearly 1,500 stray animals and wildlife. These are animals that were lost, ill or injured. This fund is completely supported by philanthropy!

Early in the summer, a good Samaritan brought a stray kitten into DoveLewis for care. The friendly black kitten was only .08 pounds and was found under a wood pile without the ability to move her back legs. She was tiny, dehydrated and her back legs dangled behind her, but to Erin Sochocky, CVT, DoveLewis’ inventory specialist, she was an animal worth saving. Because special needs cats are hard to place, Erin received permission to adopt the little kitten and named her Agnes.

“Special needs cats are just as amazing as a ‘regular’ cat,” Erin said. “Yes, they take a little more of your time, but the rewards are so much greater than any time loss.” Support of the Stray Animal & Wildlife Program make happy endings like this possible. Today Agnes zooms around the house playing with her feline family members despite not having the ability to use her back legs. She truly has no idea she is special!

From owls, chickens and snakes to your more "generic" cats and dogs, DoveLewis is here 24/7 for any animal facing a pet emergency. Thank you for supporting this program! 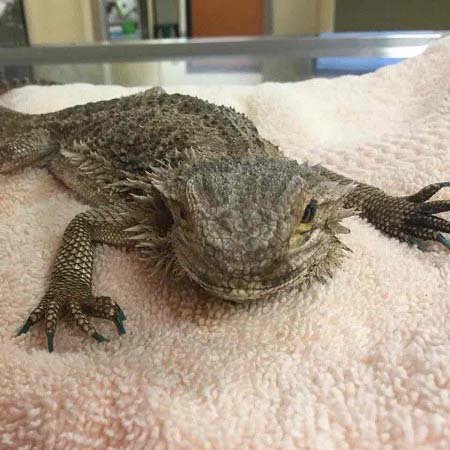 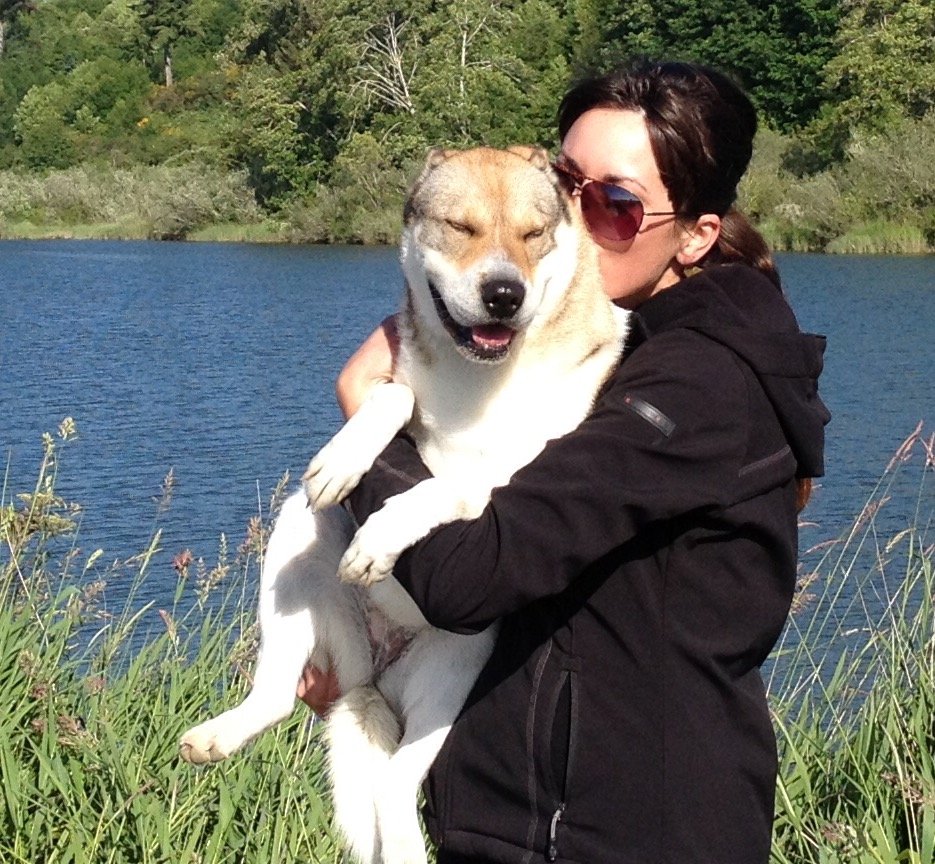 Leelu - reunited with owner after being hit by car 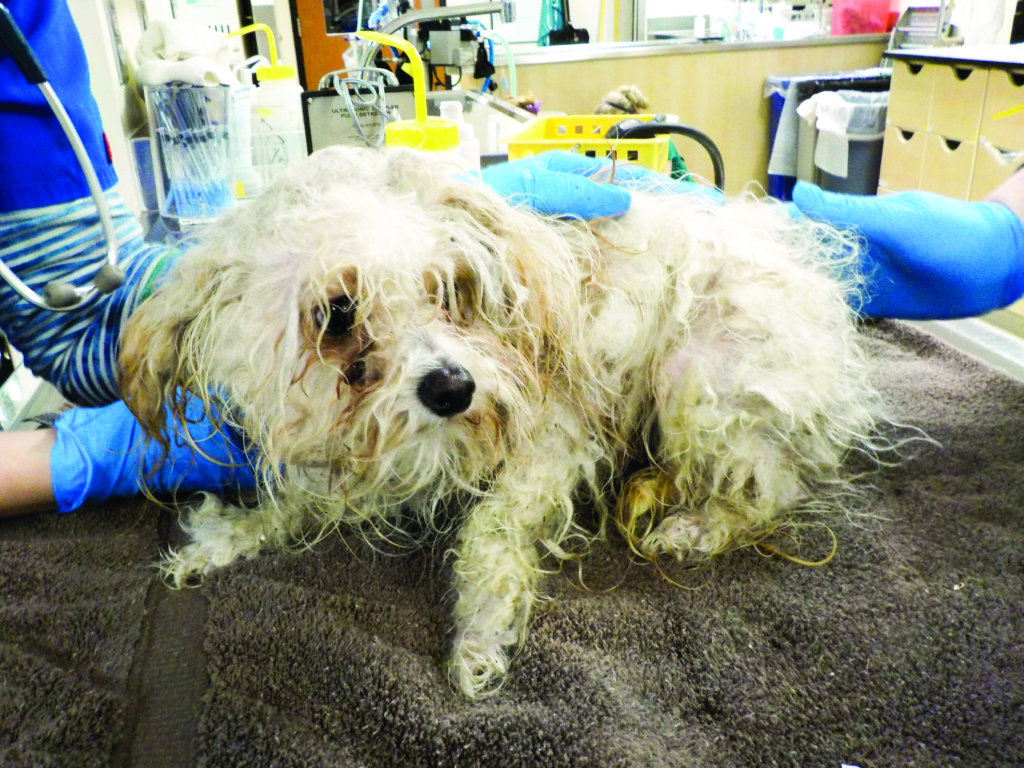 Every month, hundreds of injured stray animals – dogs, cats, birds and other critters – are brought to DoveLewis for emergency medical treatment. In addition to receiving compassionate care, these animals get a second chance at finding a forever home. This is only possible because of donors like you!

Recently, a good Samaritan found a stray dog in need of care on the banks of Portland’s Willamette River and brought him to DoveLewis. River Dog, as the staff affectionately called him, was soaked to the bone. His hair was severely matted, and he showed signs of neglect. Hospital staff took immediate action. They quickly warmed his cold, little body, while giving him a thorough exam. They even gave him a much-needed haircut to remove painful mats that were irritating his skin.

After River Dog received treatment and was cleaned up, it was obvious that the next course of action was love. He was eager to snuggle with any willing staff member. Before long, the entire DoveLewis team was smitten.
River Dog was transferred to a local animal shelter where he was immediately adopted and renamed Lamb Chop due to his resemblance to the Shari Lewis character. His new owner, despite not being a “little-dog person,” said it was love at first sight.

Gifts to the Stray Animal & Wildlife Program go directly to caring for injured, ill and neglected animals. In addition to supporting stray animal emergency care, you play a vital role in ensuring that they are reunited with their owner or find a new home. Your generosity helps relieve the pain and suffering of all stray companion animals and wildlife brought to DoveLewis for medical care.

Your support allows us to provide compassionate care for animals like Lamp Chop when they need it most. 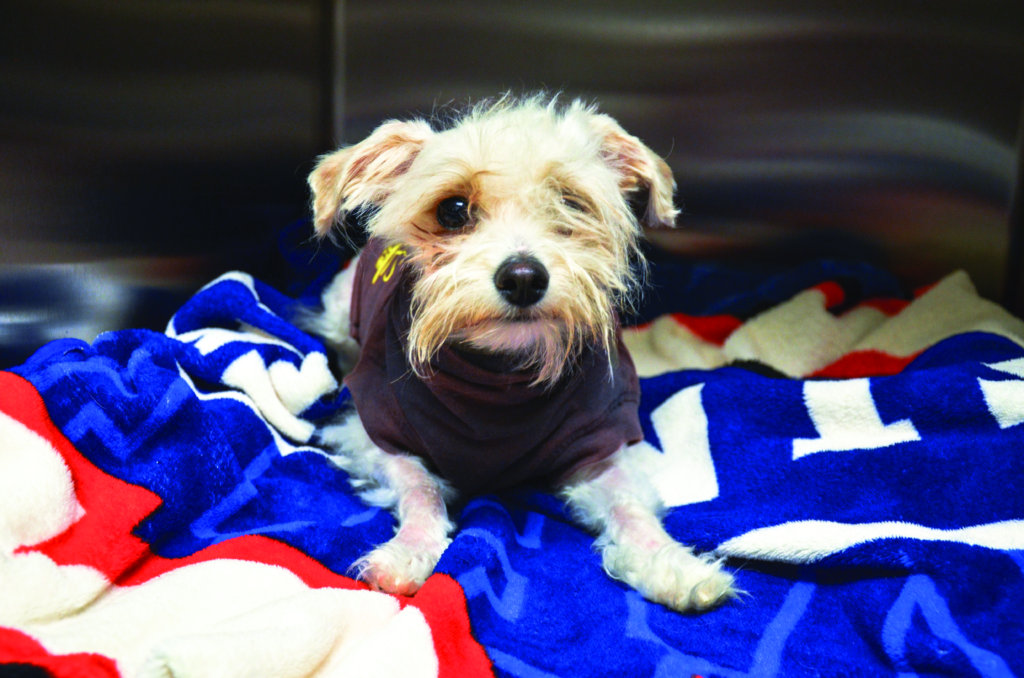 GlobalGiving
Guarantee
Donate https://www.globalgiving.org/dy/cart/view/gg.html?cmd=addItem&projid=5578&rf=microdata&frequency=ONCE&amount=25
Please Note
WARNING: Javascript is currently disabled or is not available in your browser. GlobalGiving makes extensive use of Javascript and will not function properly with Javascript disabled. Please enable Javascript and refresh this page.