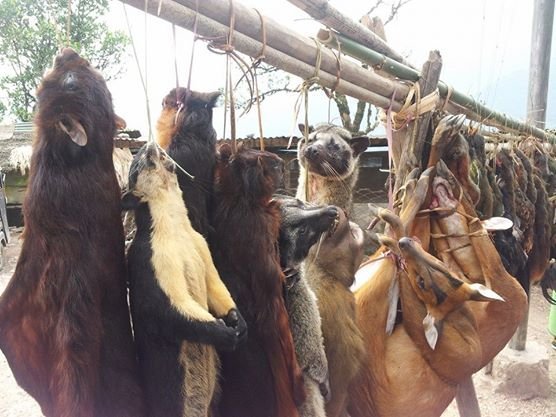 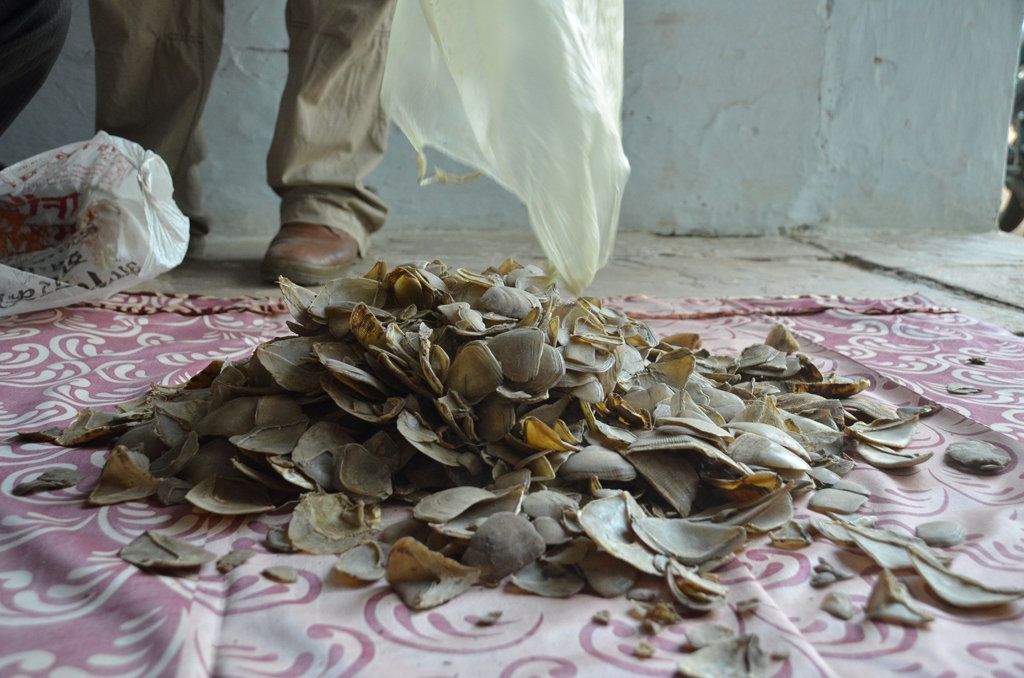 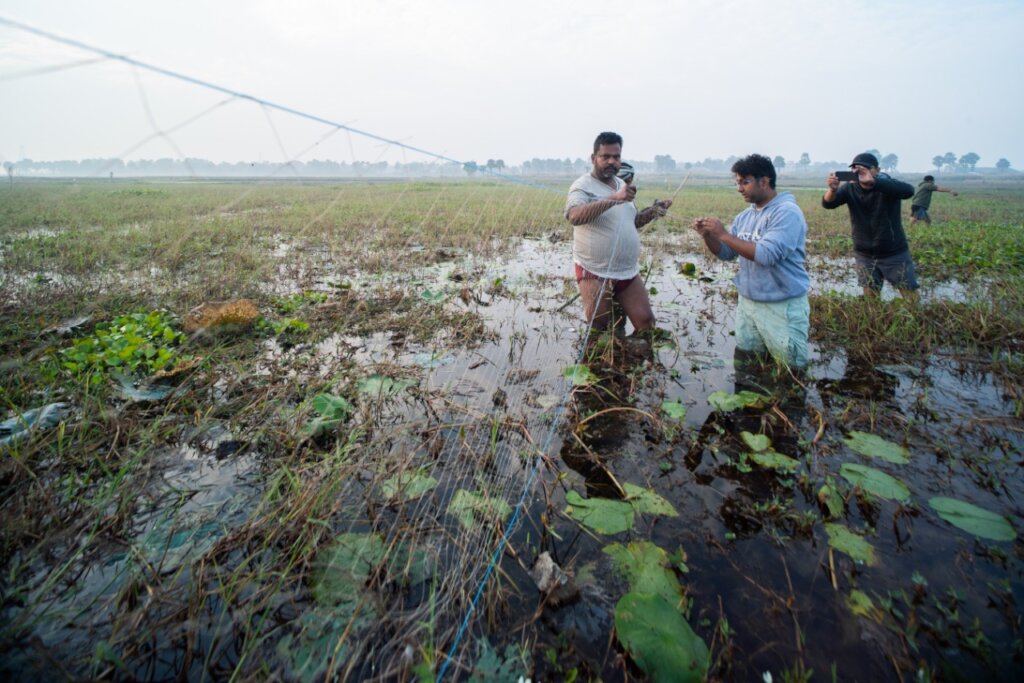 Hello and greetings from Wildlife Trust of India!

Hope you are doing great.

With this email, we are sharing the updates for our project titled 'Stop the hunting of Wildlife in India'. We are so honoured and grateful for your support as you chose to donate for the project among so many wonderful causes out there. This means a lot to us. Thank you so much for believing in our work.

Today's updates are from three regions - Malda, Birbhum and Murshidabad - in West Bengal.

Previously in 2019, with the help of a Rapid Action Project, our on-ground partner monitored two districts - Howrah and East Medinipur – for wildlife hunting. Based on the inputs from the survey, the railway authorities and police intercepted nearly 600 hunters with arms and 34 people were arrested. Further, with inputs from local communities of the two districts, hunting festival dates and locations were recorded. Based on this an ‘anti-hunting calendar’ was prepared for the first time in the region. The data has helped the Forest department authorities in monitoring hunting activities in Howrah, East and West Medinipur districts.

This year, we are replicating the project in Murshidabad, Malda and Birbhum districts to prevent hunting of migratory birds. As per the inputs from an informer network, more than one lakh migratory birds are being hunted in the region using mist nets. The hunted birds include vulnerable species such as Bristled grassbird (Chaetornis striata), Ferruginous duck (Aythya nyroca), Black headed ibis (Threskiornis melanocephalus), Black-tailed godwit (Limosa limosa) and Common pochard (Aythya ferina).

To address the hunting threat to these birds, a volunteer network has been formed who will patrol targeted areas and dismantle the installed nets/traps. So far, the team has successfully removed hunting nets from an 8-km stretch and released 33 live birds. The Forest Department is actively involved to take appropriate legal action against the people engaged in the activity.

Further, consultative meetings with the locals and sensitisation drives were conducted to dissuade hunting. Anti-hunting signboards have also been installed around hunting hotspots. We hope this Rapid Action Project will be successful in reducing hunting of migratory birds in Murshidabad and adjoining areas. 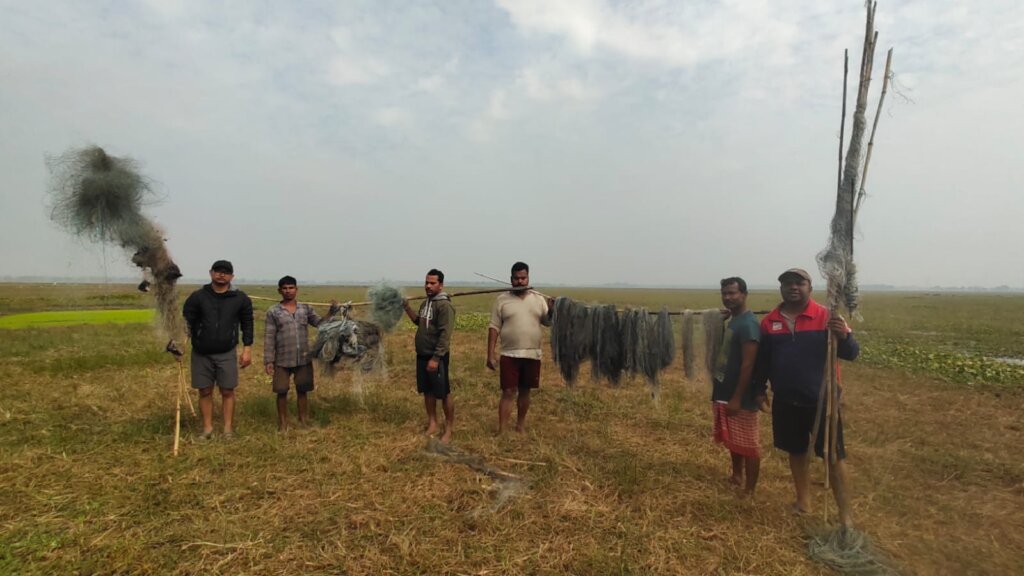 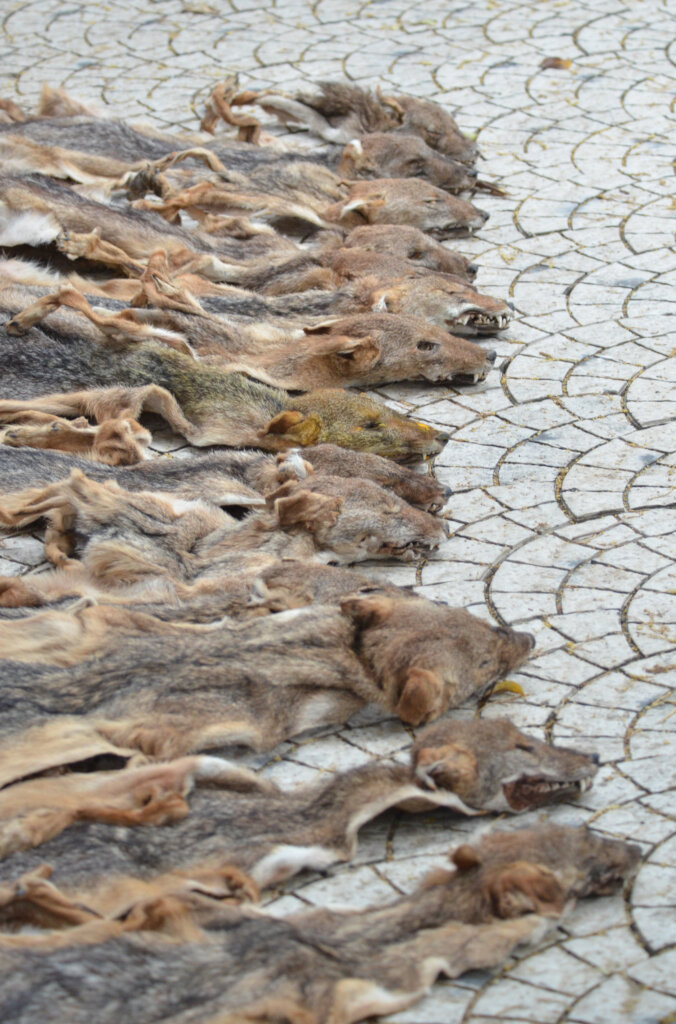 Thank you so much for making a donation to our project ‘Stop Hunting of Wildlife in India’. With your valuable support, we have been able to track illegal hunting of wildlife for commercial purposes by a community in the South Indian state of Tamil Nadu. Here’s an update on activities conducted during the reporting period.

The ‘Narikurava’ tribe (where ‘Nari’ means jackal, and ‘Kuruva’ means people) in south India are a hunting clan who predominantly depend on hunting jackals, foxes, squirrels and birds. Each clan has a tradition of keeping a bundle of clothes called ‘sami-mootai’ which is filled with the blood of animals sacrificed by them. In parts of Tamil Nadu, there have been reports indicating poaching of golden Jackals and Indian foxes by the community.

An informer network set up through a previous project had reported seven instances of illegal wildlife articles and body parts of the hunted foxes and jackals such as pelt, claws, and meat etc. being sold near temples for superstitious purposes. The details were shared with the Forest Department as well. Further investigation established that the hunting activities were even more extensive than what the team had thought. For a better understanding of the targeted species and the extensive hotspots, a Rapid Action Project (RAP) has been sanctioned in the region.

Through the RAP, twenty incidents of illegal trade and the people involved in it were identified. Also, the project gathered sufficient intel and baseline data on the extent of wildlife hunting in the area. Further action is being planned to prevent extensive hunting for commercial purposes as well as sensitise the community. We will soon be back with more updates. Till then, take care. 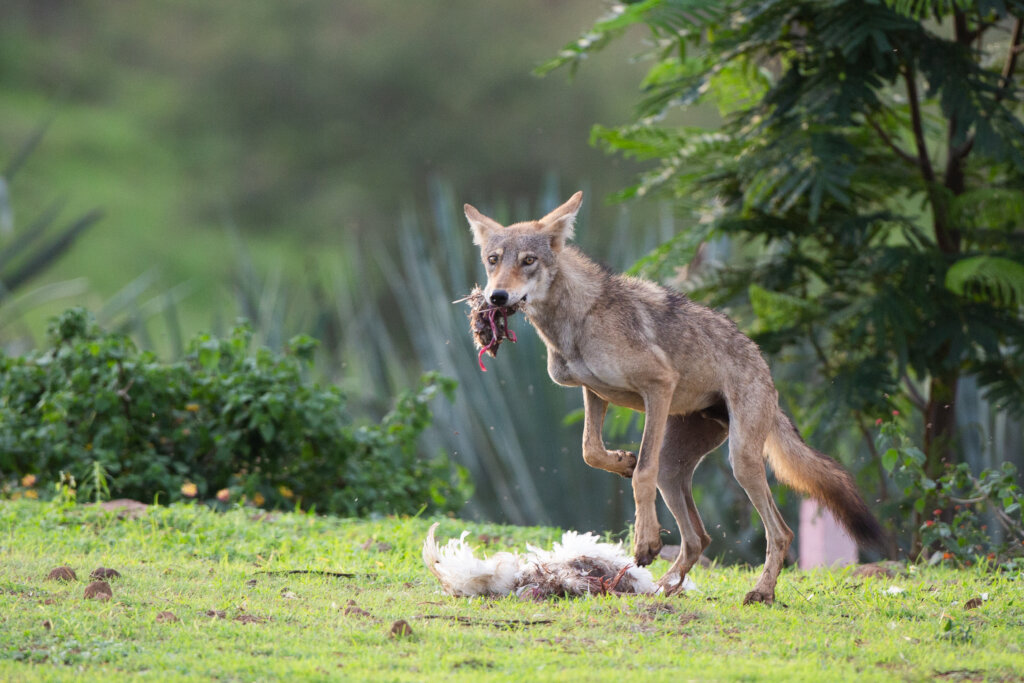 Hope you are doing great.

We are back with the updates on our project ‘Stop the hunting of wildlife in India’, which you so generously chose to donate for.

Thank you so much for your kind donation and for believing in our work. It is through your support that we are able to work towards our vision of a secure natural heritage of India.

In 2019, we sanctioned a Rapid Action Project to analyse the cause of wolf and other canid deaths in Saswad grasslands of Pune, Maharashtra. The project confirmed traces of Thimet pesticide in poultry carcass samples collected from the poultry dumping sites in the region. These carcasses dumped by the villagers and poultry farms in the vicinity of these sites provided easy food to the carnivores. But sadly, this has become a major cause for the inadvertent increase in carnivore deaths.

In the reporting period, we launched Phase II of this project, where the on-ground team is carrying out sensitisation activities to prevent this issue from recurring.

One awareness session was been carried out for 20 participants in the region on grassland ecosystems, their wildlife and ensuring peaceful co-existence. A short film on poultry poisoning and its detrimental effects for wildlife has also been produced to be showcased in future awareness events.

Further, operational poultry farms located within regions of wolf movement will be selected to organise meetings with the farm owners and sensitise them about the harms of using pesticides on carnivores. Pune Forest Department and the District SPCA will also be looped in along with the government veterinarians (who inspect poultry carcases) for a workshop to highlight the issue and come up with an action plan. Dumping sites will be designated where samples will be tested before discarding to reduce poisoning.

That’s all for today’s updates. We will soon be back with more. Till then, take care and thank you once again for your support! 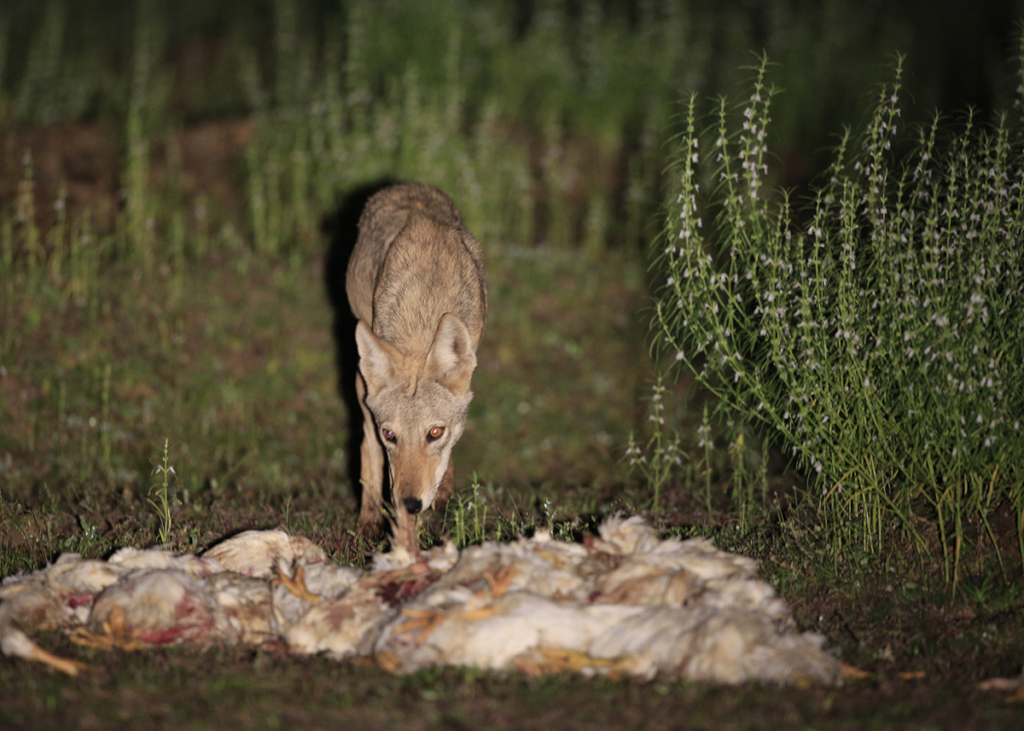 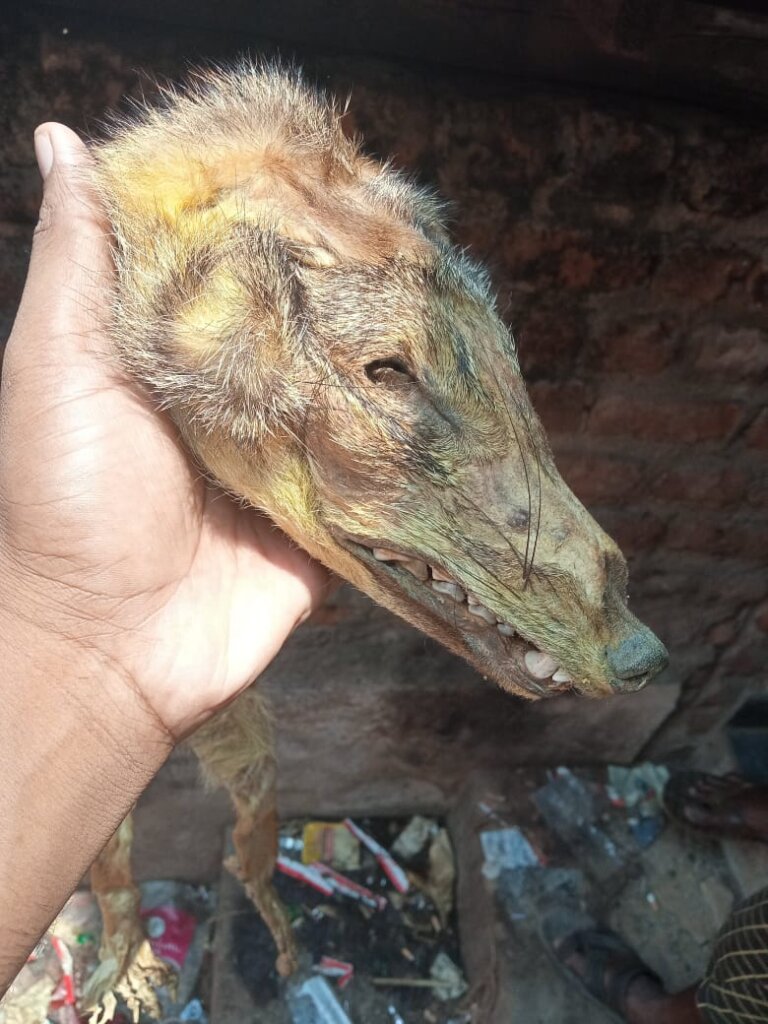 Hope you are doing great!

At the outset, we would like to express our gratitude to you for supporting our project ‘Stop the Hunting of Wildlife in India’. The project aims to address the problem of illegal hunting of wildlife for trade purposes by the tribal communities through strengthened enforcement measures and sensitisation. Tribal communities in India have traditionally hunted for meat and trophies, but the illegal International trade in wildlife has given hunting a new dimension. Your generous contribution will significantly help us realize the project’s aim. We are also highly thankful to you for believing in us, our work and for choosing to donate for this cause.

The ‘Narikurava’ tribe (where ‘Nari’ means jackal, and ‘Kuruva’ means people) in south India are a hunting clan who predominantly depend on hunting jackals, foxes, squirrels and birds. Each clan has a tradition of keeping a bundle of clothes called ‘sami-mootai’ which is filled with the blood of animals sacrificed by them. In the Theni district of Tamil Nadu, there has been rampant poaching of Indian foxes and wolves by the community for meat consumption, medicinal use as well as superstitious purposes.

An informer network set up through a previous project had gathered evidence of 7 instances where illegal wildlife articles and body parts of the hunted foxes and jackals such as pelt, claws, and meat etc. were being sold near temples for superstitious purposes. The details of the trade were shared with the Forest Department as well. The trading group is anticipated to be working in Theni, Dindigul and Madurai and is possibly involved in the trade of leopard/sloth bear parts as well. To counter the problem of hunting for trade purposes, an RAP has been sanctioned in the region to sensitize the community about the importance of protecting wild animals. It also aims to catch the culprits involved in trading.

That’s all for today. We’ll soon follow up with more updates from the project. Till then, take care! 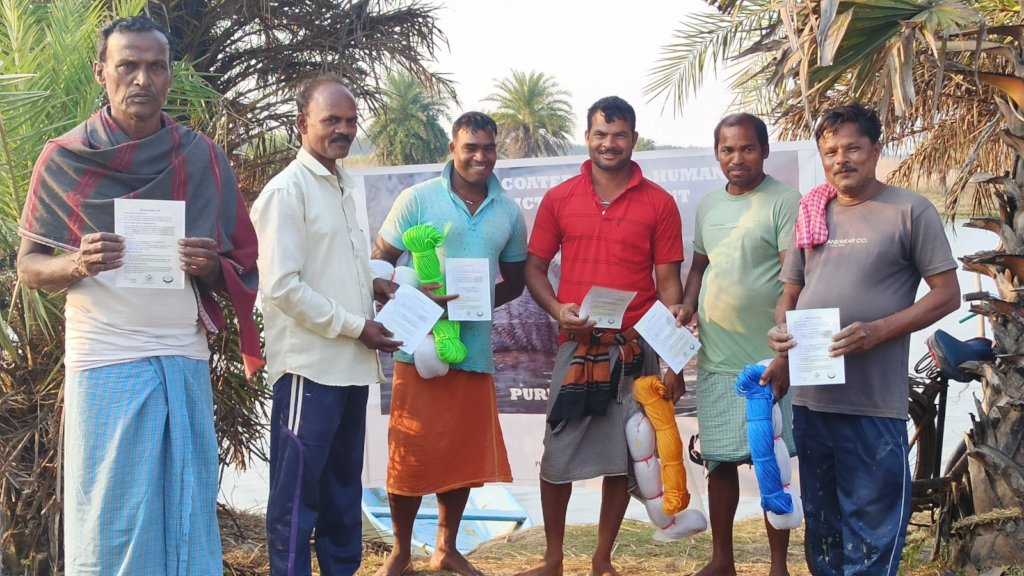 With this email, we are sharing with you the updates for our project titled “Stop the hunting of wildlife in India”. Thank you so much for your generous donation to the project.

Smooth-coated otters are subjected to pesticide contamination, illegal domestication, retaliatory killings and snare traps due to conflicts with humans, especially along the Nuanai River. A Rapid Action Project by WTI was sanctioned to Earth crusaders organisation to conduct surveys as well as awareness programmes to sensitize people on how to treat this aquatic species.

Apart from the several surveys conducted by our team through questionnaires and camera trapping, the team depended upon the information being provided by the locals to trace otters and identify several threats towards them. They were able to locate conflict-prone areas to assess threats with the support received from the locals. Rapport building with the fishermen community helped the team in human-Otter conflict mitigation segment under which five affected fishermen were compensated with new fishing nets. Activities like awareness campaigns in the community centres and wall painting (2 paintings) were possible due to their cooperation. Along with the Forest Department the team conducted anti-snare walks in the field sites and 6 snares were seized. The team conducted sensitization campaigns (1 for the Forest department, 2 for the community, and 18 institutional sensitisation) for a total of sixty people in schools, colleges and community centres. Issues such as retaliatory killing, snaring, pollution and myths about the species were being addressed during these campaigns.

To investigate the poisoning of otters in retaliation observed in a particular site, the team managed to test water samples and confirmed pesticide contamination. Sensitization programmes involved spreading the word of the harmful effects of pesticides and the Forest Department was notified of this threat.

This project was the need of the hour as major habitat destruction had taken place because of the severe cyclonic storm FANI resulting on a rise of Otter-human conflicts. This RAP has thus created a baseline for long term interventions in the landscape.

That’s all for the update under the project. We’ll get back to you with more updates soon. Till then, take care. 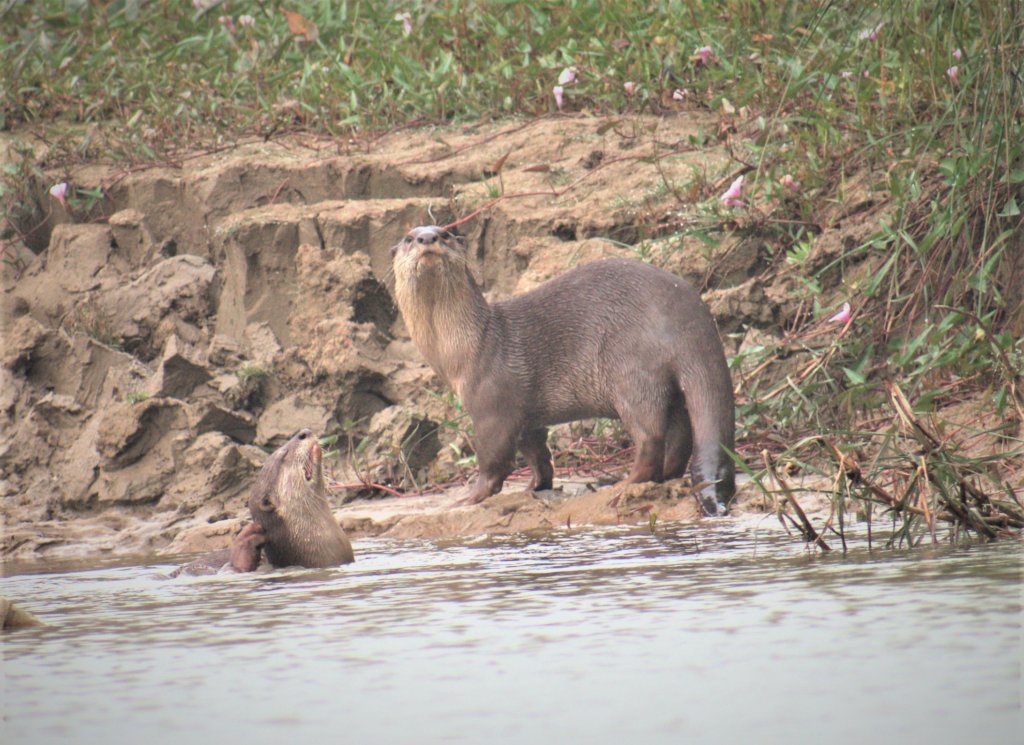 Project Leader:
Samruddhi Kothari
Assistant Manager
Noida, Uttar Pradesh India
$5,184 raised of $8,000 goal
You last donated to this project on
71 donations
$2,816 to go
* Amounts in US Dollars
Donate Now
Donate once
Donate monthly
$25
USD
One day cost for one member of local intelligence network
›
$50
USD
Awareness activities for a local cluster
›
$80
USD
Cost of team transportation for one day
›
$100
USD
Formulate intelligence network to bring wide reach in the area
›
$150
USD
Equipment for the one member of intelligence network
›