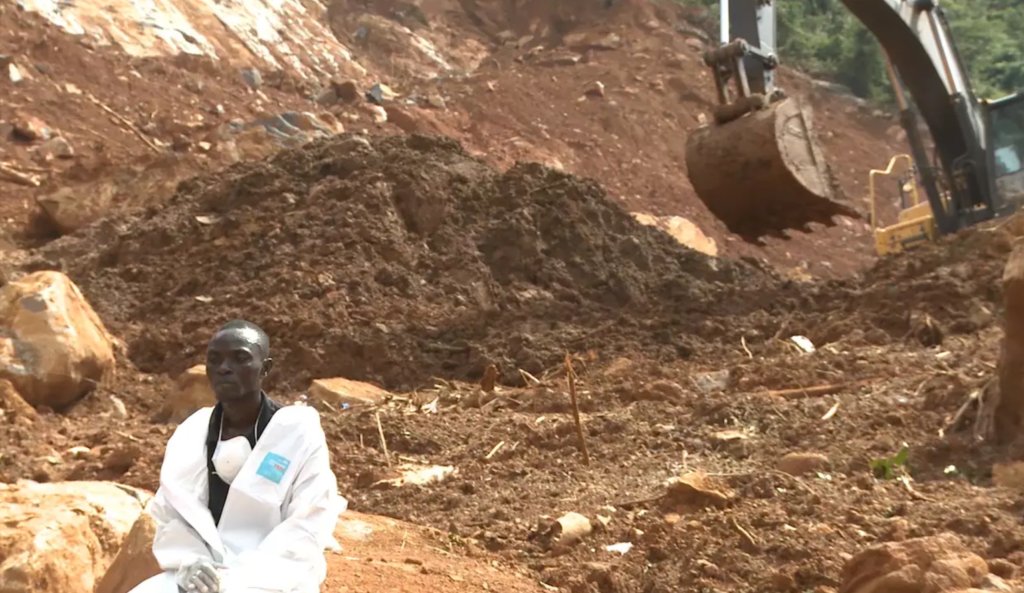 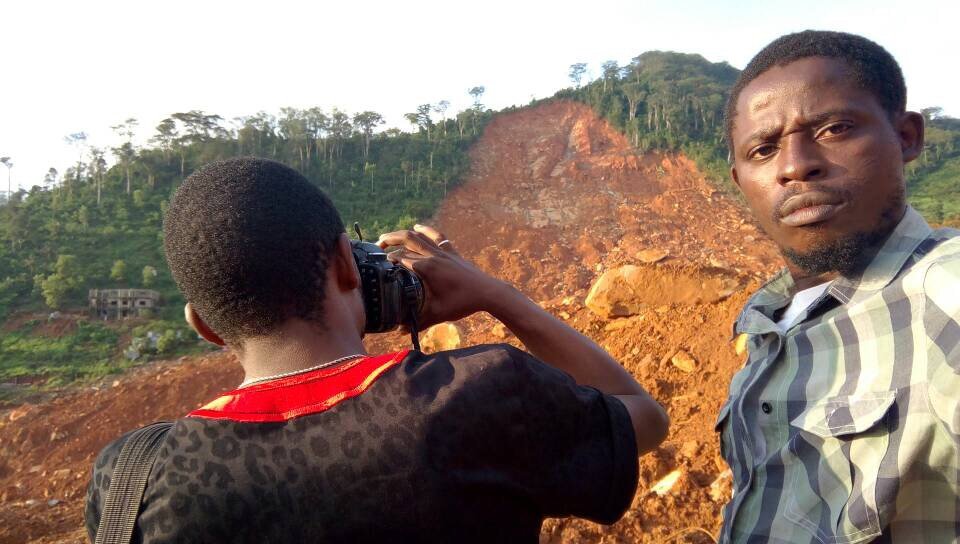 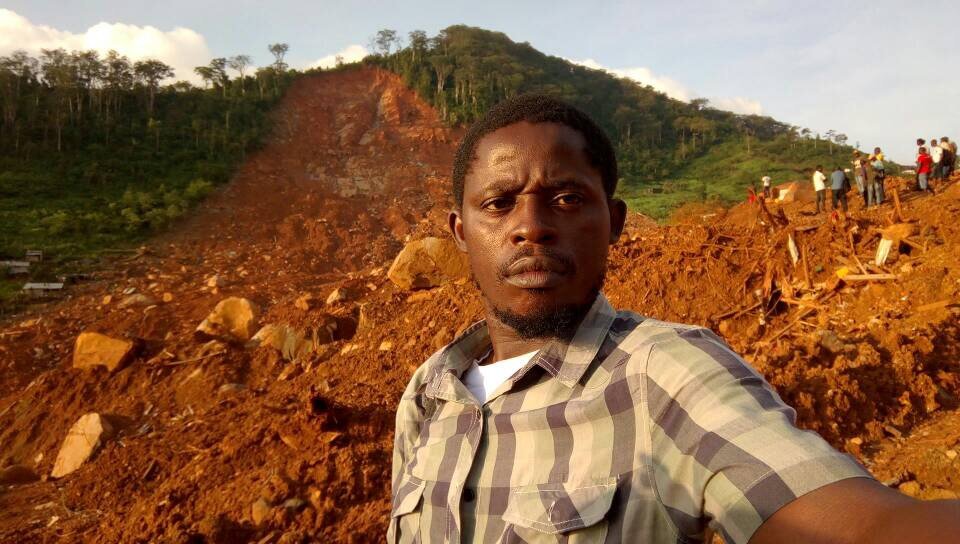 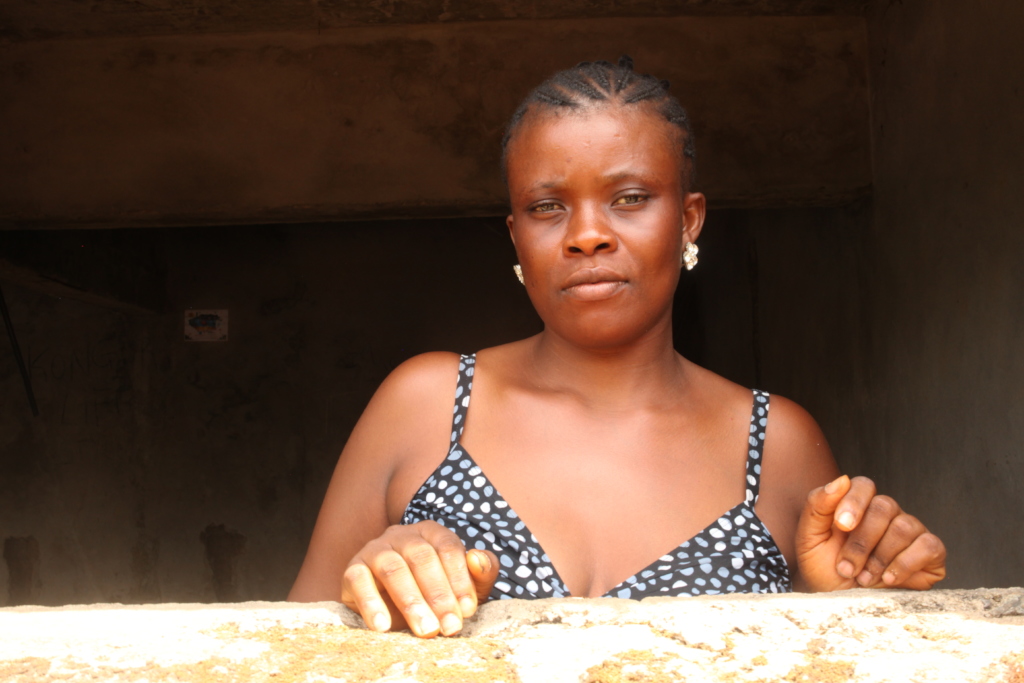 We wanted to write and express our deep grattitude for the support you have given us so far. This is going to be our last progress report on GlobalGiving though and we want to tell you about what we have planned for the SENEVA project.

We have been working with athe Mudslide Affected Persons Organization to organize a community theater performance based on their experience duting and just after the tragic event that killed over 1,000 people in Sierra Leone. The performances both commemorate the incident and to draw the attention of affected communities to the dangers of living in areas prone to future flood related dissasters. In line with this effort the WeOwnTV Freetown Media Centre has also been producing and distributing short video messages to build awareness during the rainy reason.

Freetown and its immediate surrounding used to be a densely forested area home to a huge number of primates and birds. The 12 year civil war saw the influx of refugees from all over the country and the many of these hillside areas have been deforrsted and are now populated in vulnerable areas. This human activity and increased heavy rains have made this a dangerous situation.

The documentary film is now in post production. While w will continue to be engaged with community education work we very much look forward to sharing the film with the world in 2020. The film shows us an African nation confronting compounding issues brought about by poverty and the disastrous effect of climate change. The film chronicles the events of a tragic mudslide on August 14th, 2017 that took the lives of more than 1,000  Sierra Leoneans and incorperates the contributions of community theater work that has been playing an importnat role in how people are coping with this tragedy. The documentary also shows us a unique and inspiring brand of African environmentalism that may bring about a much needed change.

Again, thank you to our community on GlobalGiving for your continued support. 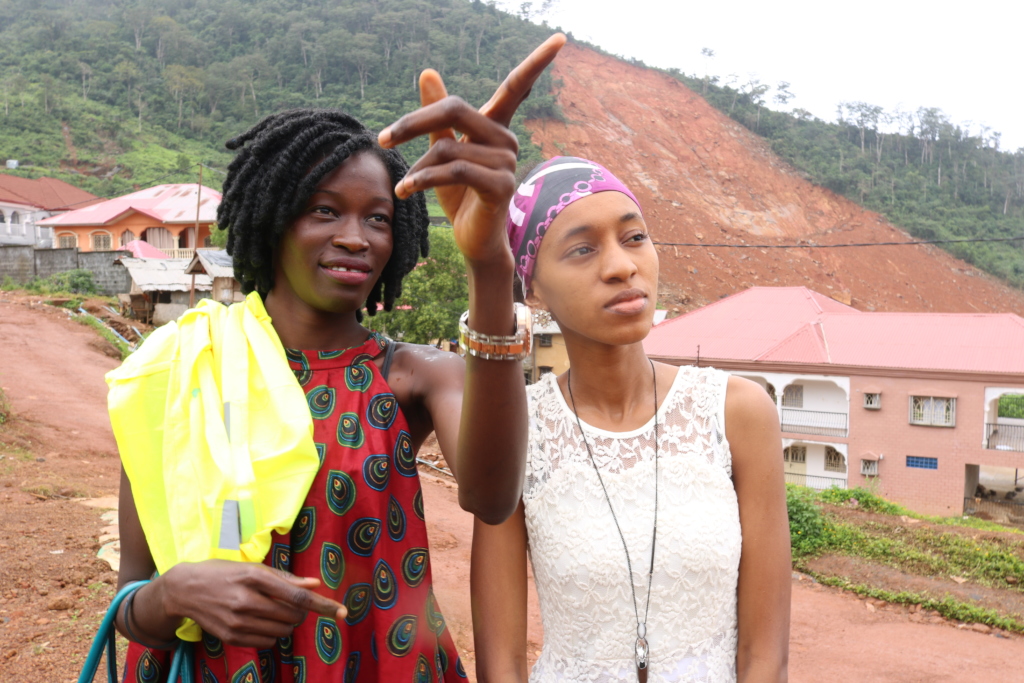 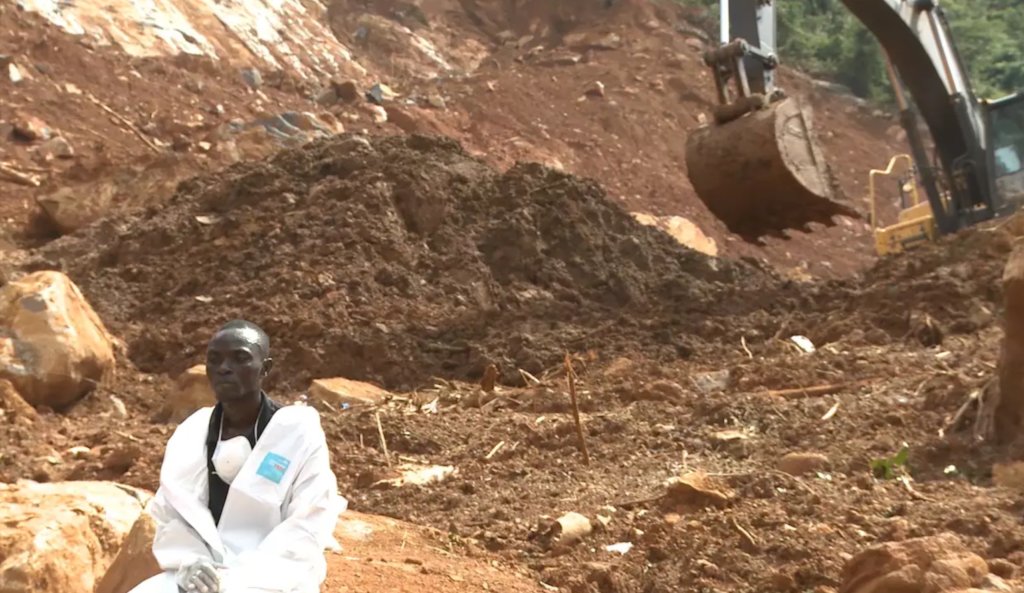 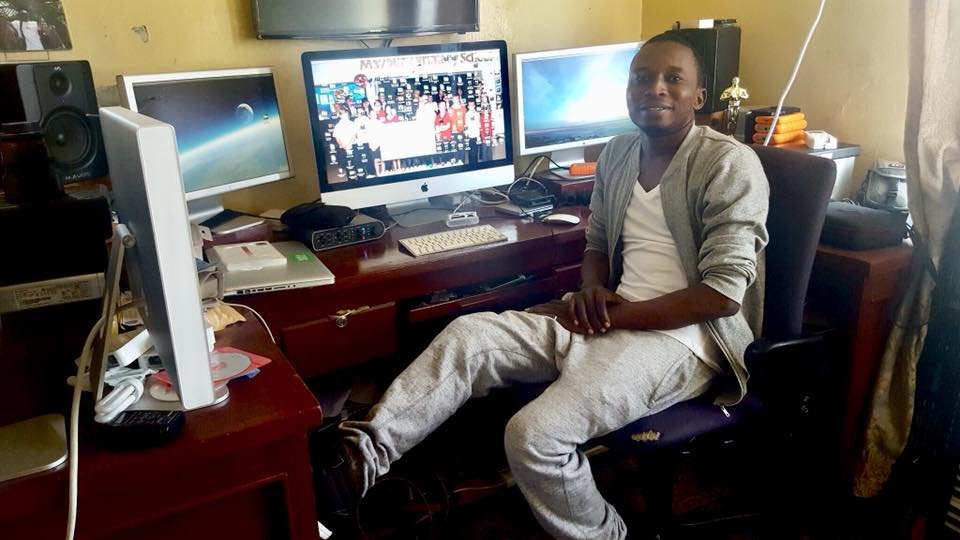 Survivors of the mudslide have developed a new play about the night of the mudslide. The theatrical performance, which is an improvisation, will tell the survivors' personal stories of what happened during the mudslide and share their hopes for the future. The play will give a vivid picture of their lives when the tragic mudslide occured and share how they survived what nature had in store for them.

Our production team will follow this group through their rehearsals until their presentation day. We have conducted interviews with several members of the group to see how their personal stories will help us understand what happened and what they hope to achieve with the theatrical performance.  We want to experiment with this theatrical performance done by the actual victims to see whether it fits into the narrative of our film.

The staged performance will be done on the 27th of April, 2017 which is Sierra Leone’s Independence Day. In May, we will release a series of clips that will remind people of the mudslide as a campaign to get communities to change their behavior with regards to the environment and possible dangers in the rainy season.

We appreciate your interest and support in our film. Please share our project with your family and friends.

“Artistic freedom is the antidote to lies and deceit. Celebrate and partner with new talent. they help us see hope in a more open hearted manor.” These were the words that IDFA’s new Artistic Director Orwa Nyrabia opened the festival with. It was a powerful and inspiring week for our team who was there for the European Premiere of SURVIVORS and as a part of the fist ever West African delegation to the festival. The delegation was made up of SENEVA Director Arthur Pratt (Sierra Leone) who was there with his film SURVIVORS, and four WeOwnTV Filmmaker Fellows.

At the 31st addition of IDFA there was at once a wonderful sense of community and of a world united and through this connection also a deeper recognition that many of the most critical issues facing communities around the world have shared causes; climate related emergency, xenophobia and the rise of totalitarianism. At the festival this year there are 72 countries represented in the overall selection. Our team helped add to this list with three historically underrepresented countries; Ghana, Liberia and Sierra Leone. SURVIVORS in fact was the first film ever directed by a Sierra Leonean to be screened at the festival. Needless to say, the overwhelming feeling amongst our group was pride and gratitude to be given this opportunity and platform to share our work.

SURVIVORS premiered on to a sold out audience and the film was met at each screening with great praise for the production teams bravery and creative vision. Each screening was followed by connected and fascinating Q&A’s that drew out many festival goers who had spent time in the region. The film was also nominated for the prestigious Amsterdam Human Rights Award.

Arthur was invited by DocSociety to present on our outreach work in West Africa. He detailed the West African Screening series we are planning and our oral histories database project WeSurvive. He closed his remarks with a challenge to the room that drew a standing ovation:

”If you want to make movies about us - don’t send in your cameras. Hire us to tell our own stories.”

Our participation at IDFAcademy was a highlight for all. Four WeOwnTV Filmmaker Fellows were invited to participate in the four day program of presentations and meetings with industry professionals. Lawrence (Ghana) was attending with his film The Problem, which explores male identity and the concept of success in modern Africa. John's (Sierra Leone) Life After the Army presents the current plight facing his country’s ex-serviceman. Valentino’ s(Liberia) Inside West Point paints a complex portrait of one of Monrovia’s largest slums. Tyson’s (Sierra Leone) An’Bondo Beykey, which means “Stop Female Genital Mutilation,” takes a very personal look at this heated social issue in Sierra Leone through the story of a close friend of the filmmaker’s who died from this practice.

At the festival we made many new friends and of course reunited with comrades of old. We met the team from First Hand Films who now rep international sales for SURVIVORS. Many of our funders were also at the festival to celebrate the success of SURVIVORS and our new round of fellows. We raised our glasses with Beadie and Jess from DocSociety and Tony, Sparkle and Rebecca from the Bertha Foundation; Isabel and the entire IDFA Bertha team who helped us immensely to navigate the VISA process and of course provided inspiration and guidance during IDFAcademy; there was a wonderful GoodPitch Kenya reunion (Docubox’s Mudamba Mudamba pictured with Banker White and Arthur Pratt at left) the legendary Steven Markowitz, and at a party hosted by TFI’s Jose Rodriguez the night before we all returned home.

Cleaning is the first step to preventing flooding 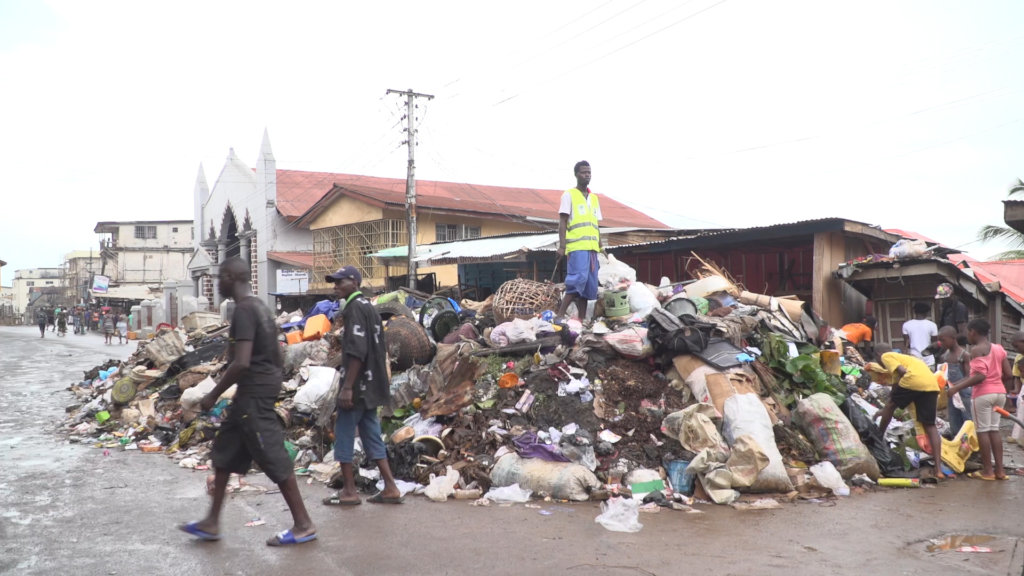 The floods in Freetown can be catastrophic in part because the population expansion has not been properly planned or regulated. This results in a lot of problems, not the least of which is debris that contributes to flooding. When the military took over power in 1992 they introduced the idea of a national cleaning day during which the general population is encouraged to come out and clean their streets and immediate surroundings. This maintenance can help prevent flooding because the gutters get cleaned so less garbage and debris flows down with the soil from the hillside surrounding the city. This activity was not allowed to continue by subsequent governments who interpreted it as a violation of human rights.

Some of our new government leaders were involved in the above-mentioned military program in the 90s's and they have reintroduced the idea of a national cleaning day to minimize the risk of flooding in the city. The drain pipes are still regularly blocked by garbage and massive erosion as a result of persistent construction on the hill side, but the cleaning has greatly minimized the risk of flooding this year.

The amount of rainfall in Sierra Leone is below average with rainfall from June to August at record lows.  There have been a few days in which downpours were heavier than normal. This change in rain pattern does not mean that there is no risk. The production team is closely monitoring the situation as we continue to film as much as we can and search for mudslide victims who are willing to be profiled.

I am currently in San Francisco to support the broadcast premiere of our film Survivors on PBS’s award-winning series, POV, on September 24th, 2018. 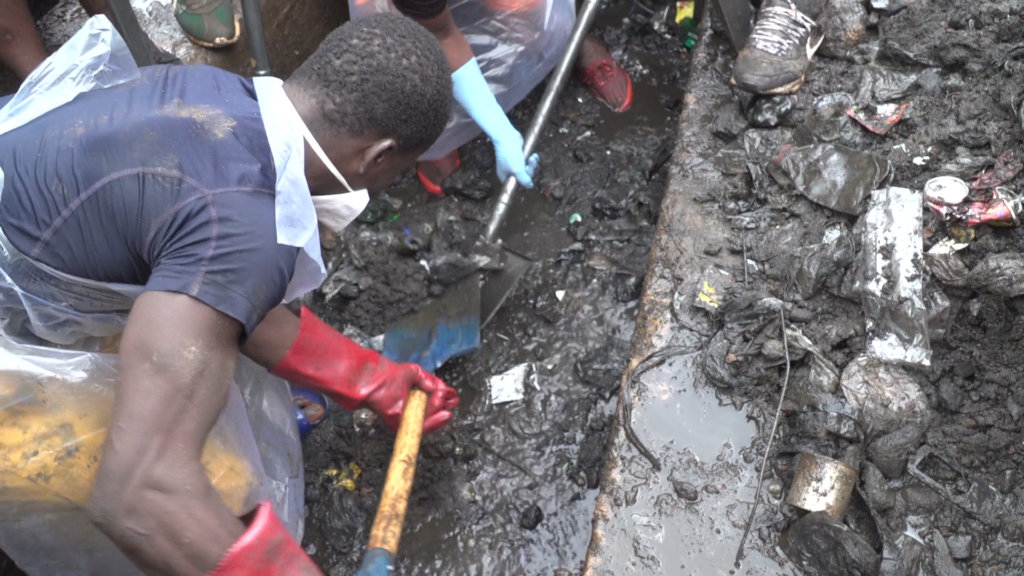 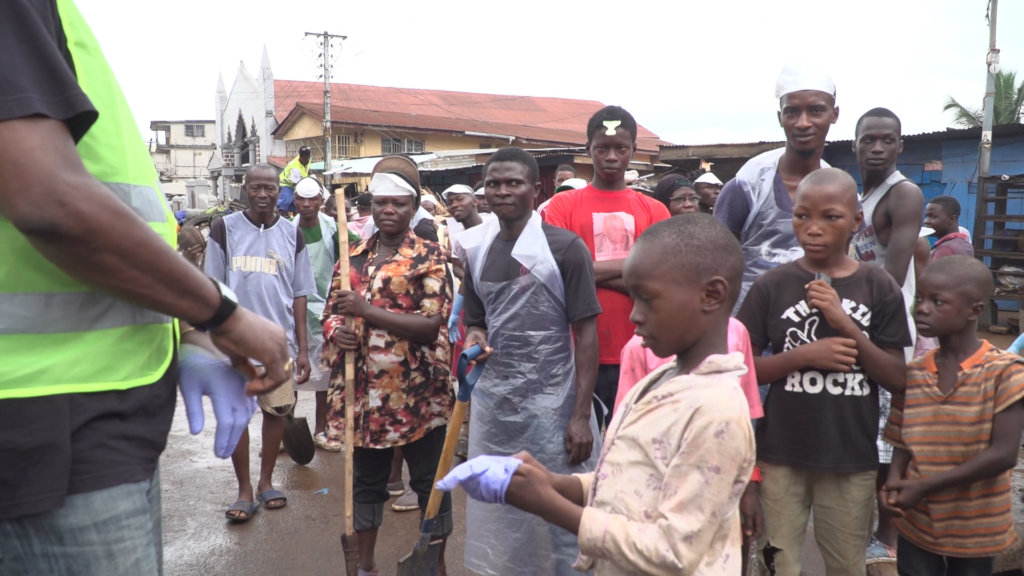 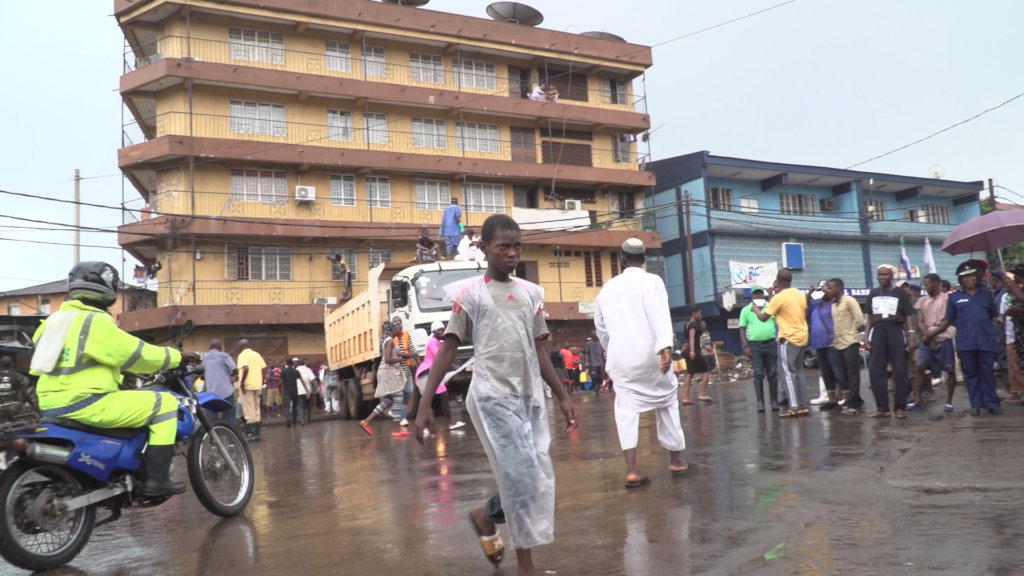 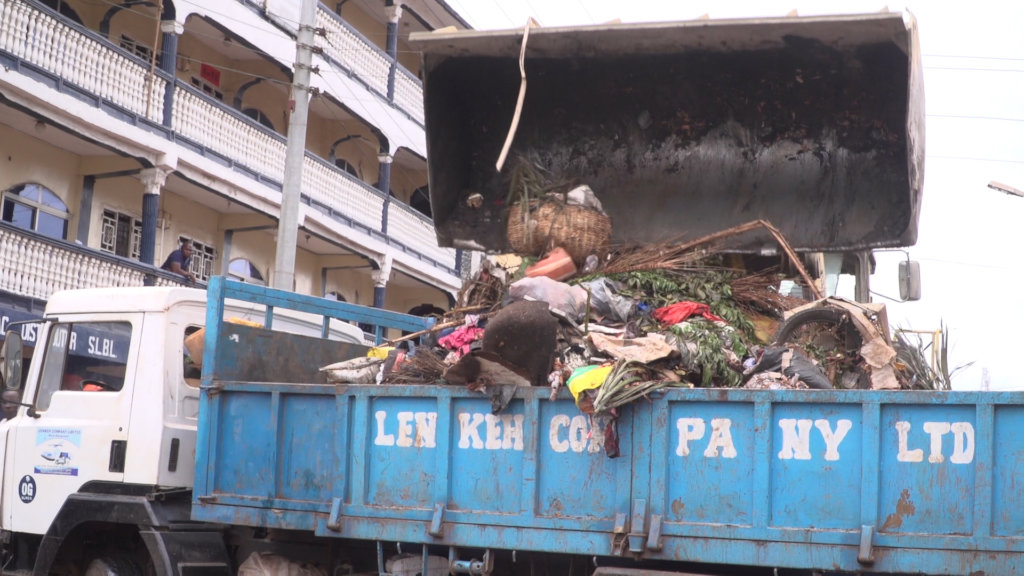 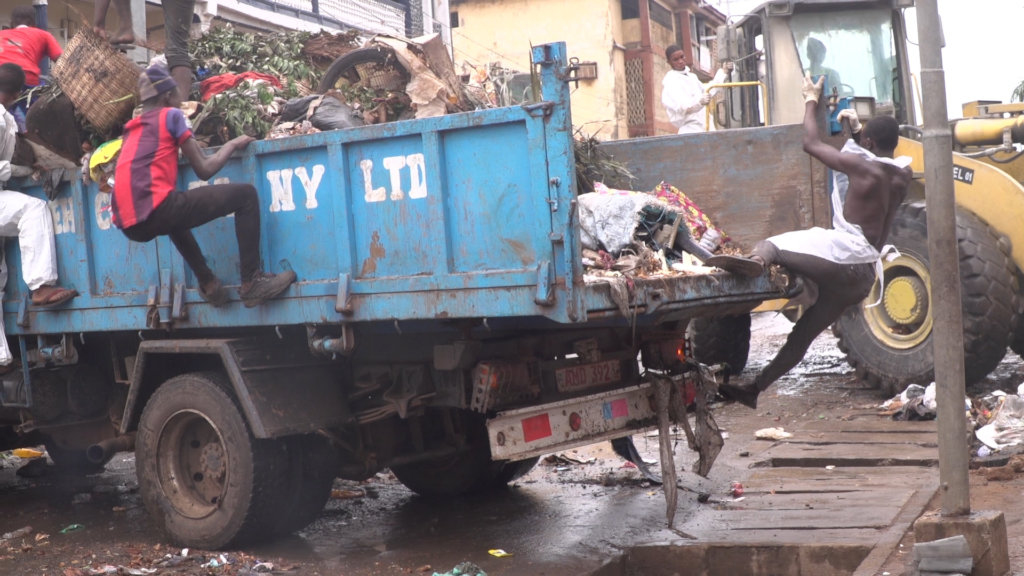 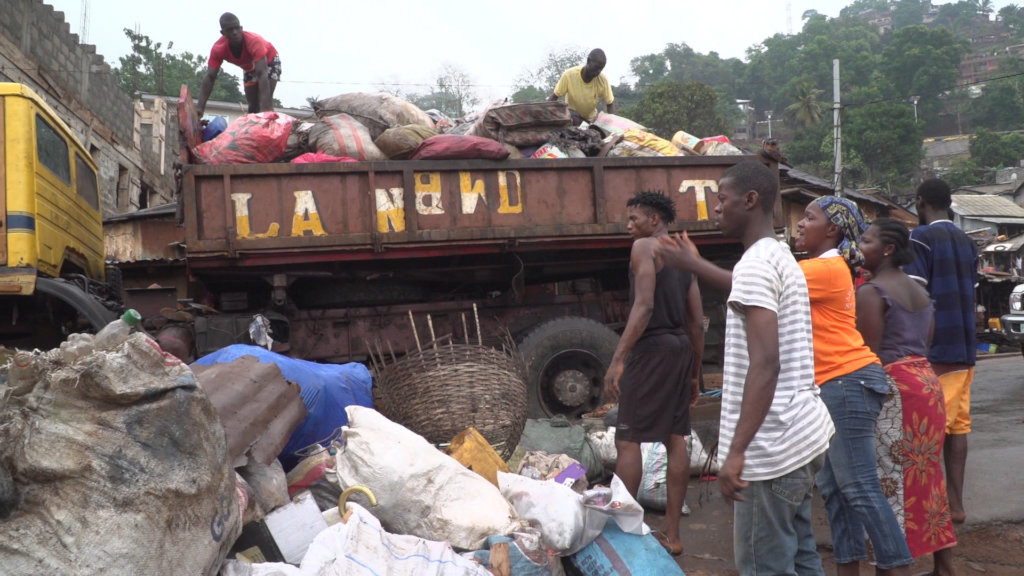 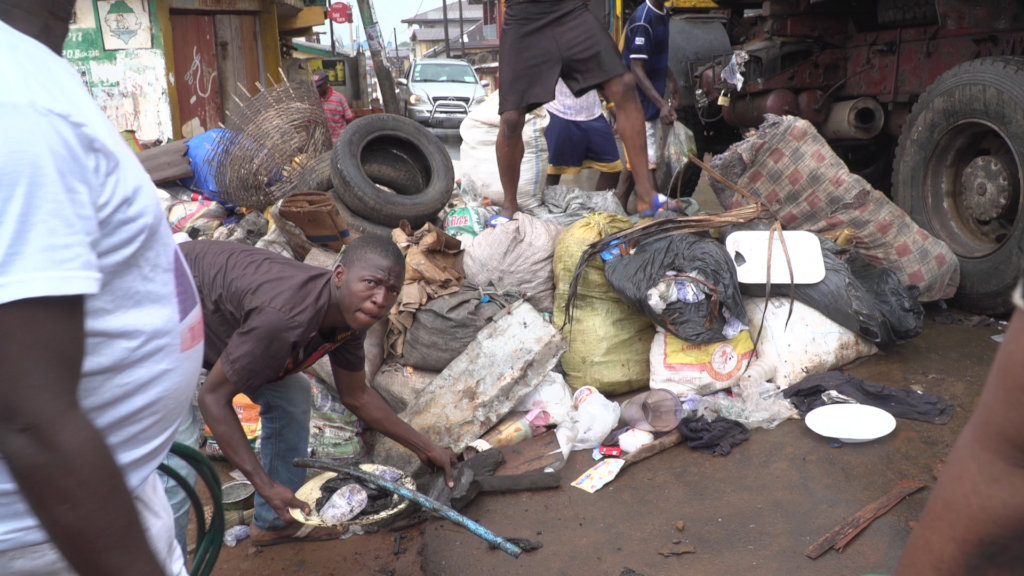 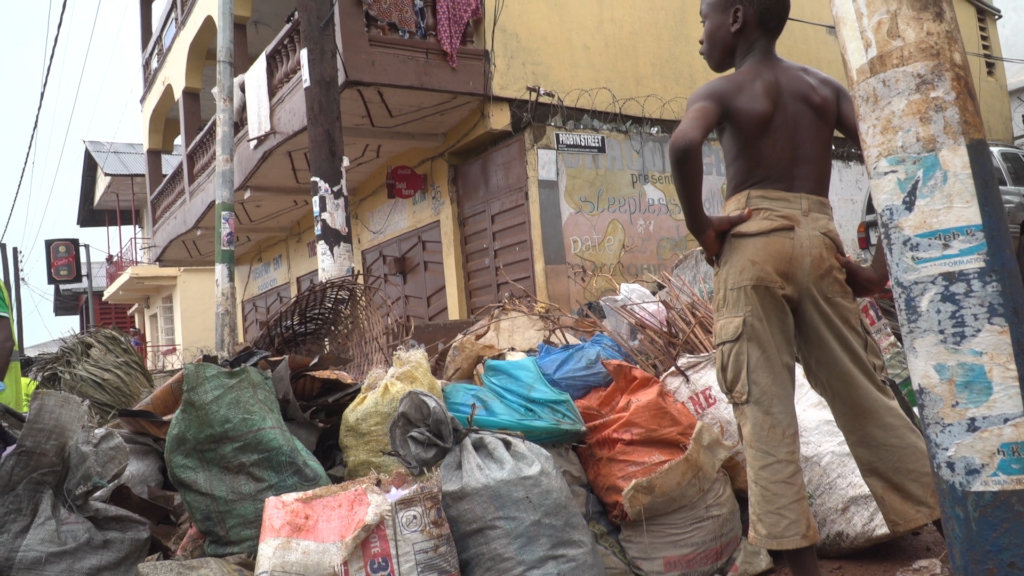 The Rains have Begun 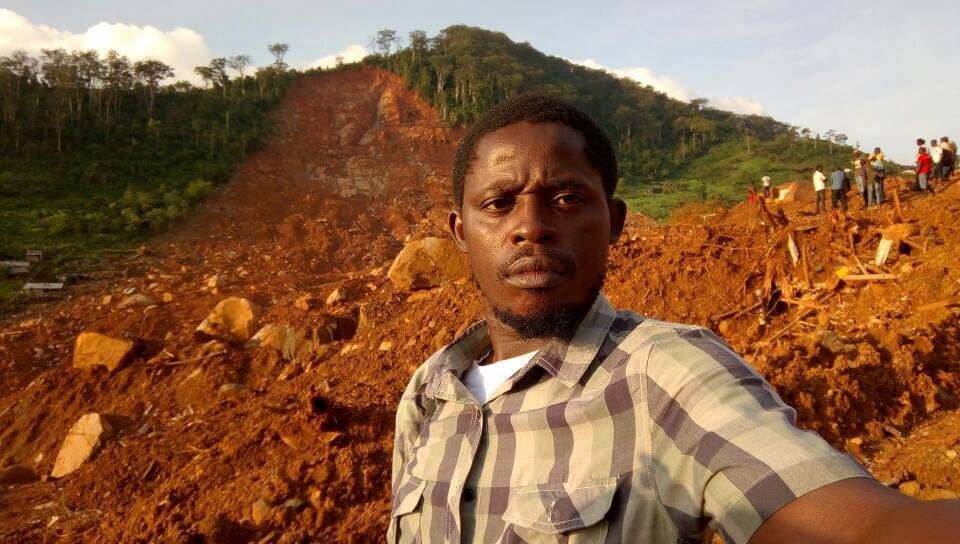 The rains have started again some people have begin to rebuild their houses in areas where the mudslide took place. There is very little or no voice speaking about this in Freetown. This makes the film much more important and needed to start critical discussions and decisions. The editorial process is in place and we are now focusing on making sure that people understand the dangers they face in such areas. i have begun to film with my team aswell in areas that are very prone to desaster but has not actually gon through any major desaster issues. These areas include 4 seaside communities in Freetown two rural villages in the Western Rural district and over 15 mountain settlements.

Also identified as a problem is the issue of political gains made by political parties in power last year when they allow people people from their ethnic or regional background to settle in areas deemed as public property. The new government in power is showing signs towards addressing these issues but the question is would they do what is needed and how willing are the people to do what is right.

we are working to put together a five minute peice that will be used as an urgent advocasy and educational tool for communities and authorities as well. No one can tell what will happen during this raining season therefore we must do what we can to educate the people. The five minuetes peice will focus on the original mudslide and its immediate effect on individuals and family as well, it will also highliegts those areas that are prone to desaster and try to profer action that people can take in the interim there is an emergency. The five minuetes short will feature interviews from two characters that were affected directly and also exparts that will help us to understand key issues that needs to be address.

We will continue shooting through out the rains in the next four months monitoring the situation and following characters observing their behaviors and related practices.

i am presently attending the Encounters- South African International Film Festival and have been spreading the word about the film which seem to have attratected the attention of other filmmakers, journalist nd activist as well. 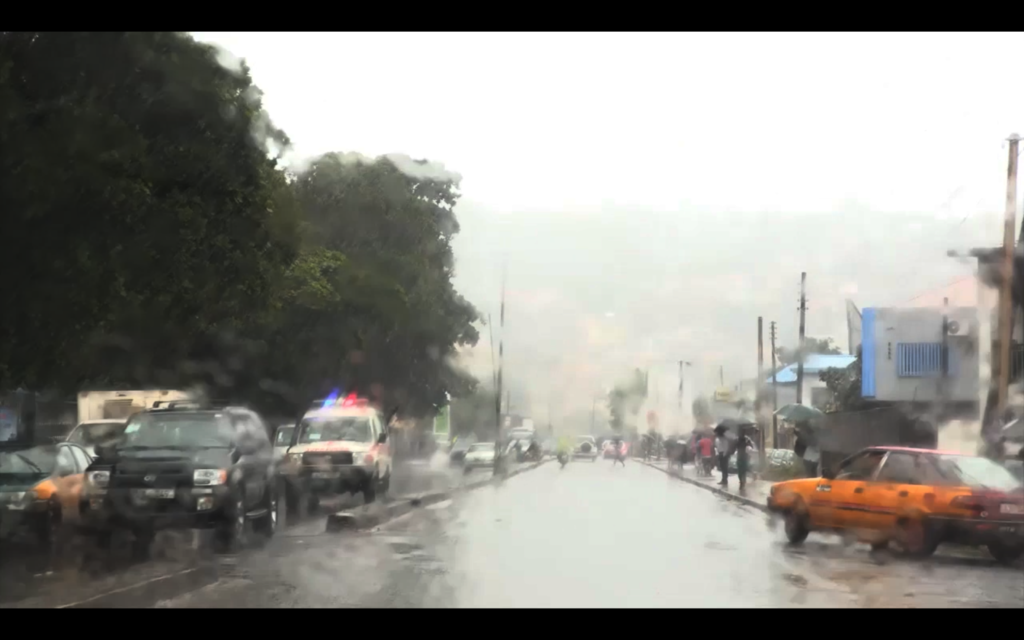 Rains have begun in Freetown

Support another project run by Mirabel Pictures / WeOwnTV that needs your help, such as: 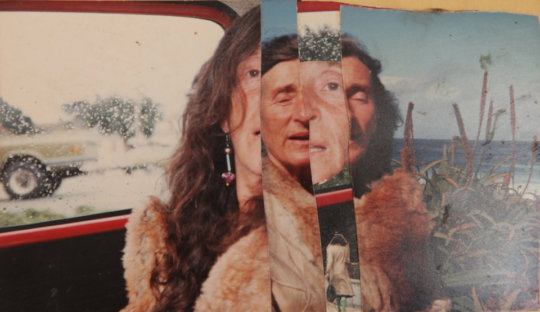 Heaven Through the Backdoor
Find a Project

GlobalGiving
Guarantee
Donate https://www.globalgiving.org/dy/cart/view/gg.html?cmd=addItem&projid=29733&rf=microdata&frequency=ONCE&amount=25
Please Note
WARNING: Javascript is currently disabled or is not available in your browser. GlobalGiving makes extensive use of Javascript and will not function properly with Javascript disabled. Please enable Javascript and refresh this page.