Relief/Recovery for flood affected in Pakistan 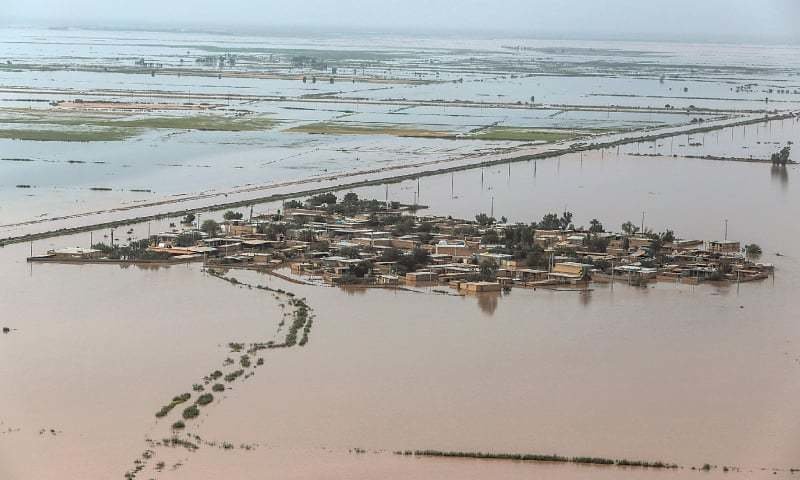 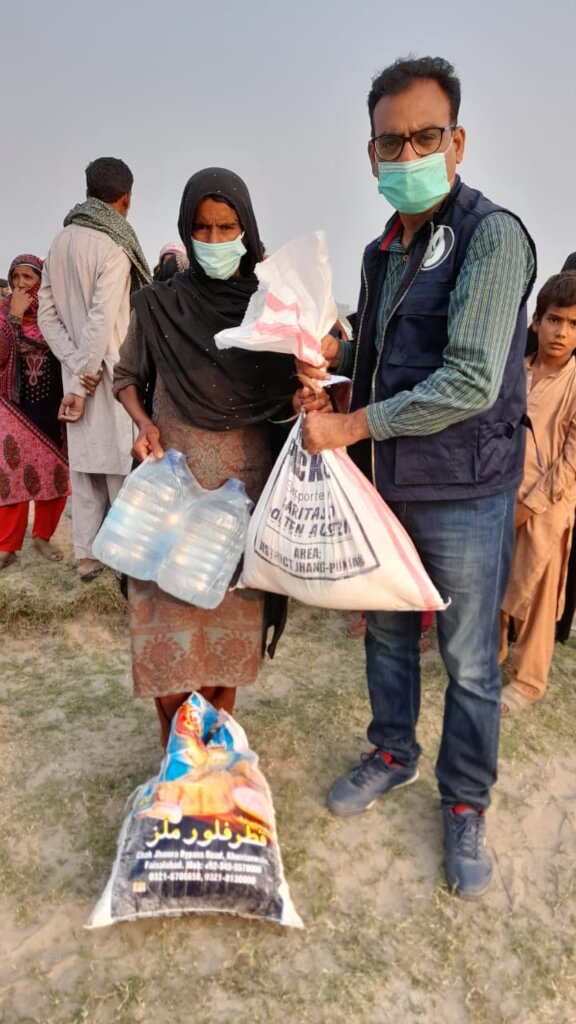 Disaster Risk Reduction (DRR) project was implemented by AWARD Pakistan in the year 2020-2021 in 15 areas of Kot Addu District Muzzafargarrh, The project was funded by GlobalGiving. The funds raised under this project were added up in the main project and the major intervention of the project  which are mentioned below;Due to the COVID-19 consecutive lockdowns, the number of target areas for the Disaster Risk Reduction Program was reduced to 15 from 24.1. Basti Vehniwal2. Basti Tullana3. Basti Muradwala4. Basti Darmanwala5. Basti Nawan6. Basti Halla7. Basti Hassanwala8. Basti Mochaniwala9. Basti Malhay10. Basti Litan11. Basti Kachiwala12. Basti Ganjarrwala13. Basti Talliwala14. Basti Nabiwala15. Basti Gurdywala

Similary, AWARD Pakistan distributed food packages among 250 flood affected families who were living on the bank of the river Jehlum and Indus in Southern Punjab,Pakistan.  As Pakistan is among countries facing severe effects of the climatic changes which results in the occurance of floods every year after the monsoon.

The community was extremely happy and they thanked AWARD for the timely help. One of the beneficiaires "stated it as a blessing in disguise as they said that were waiting along for this help as there was no work for us"

As the Monsoon is approaching and there is huge risk of flood in the southern part of country therefore , AWARD requests its supporters and donors to kindly donate to this project. 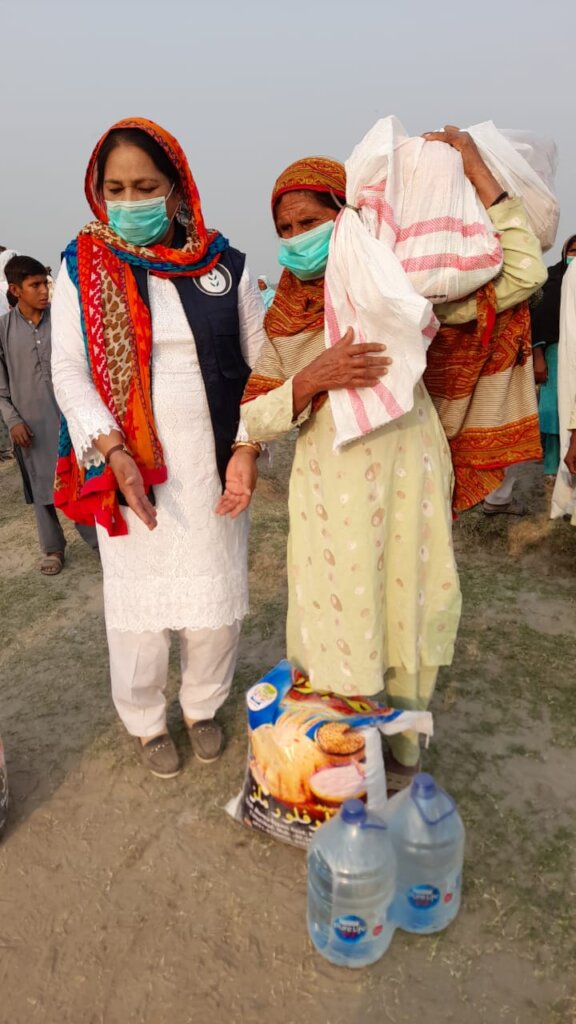 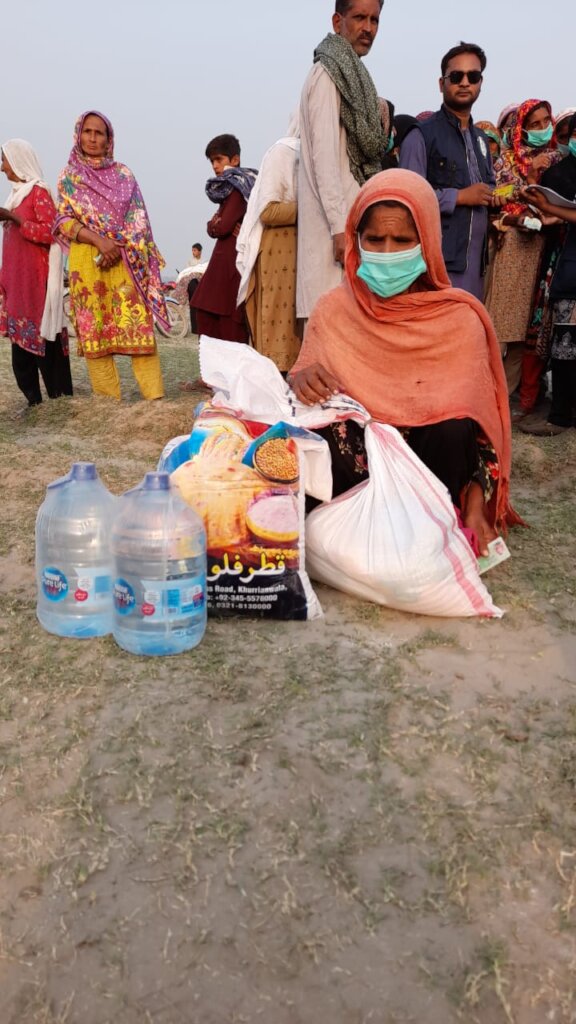 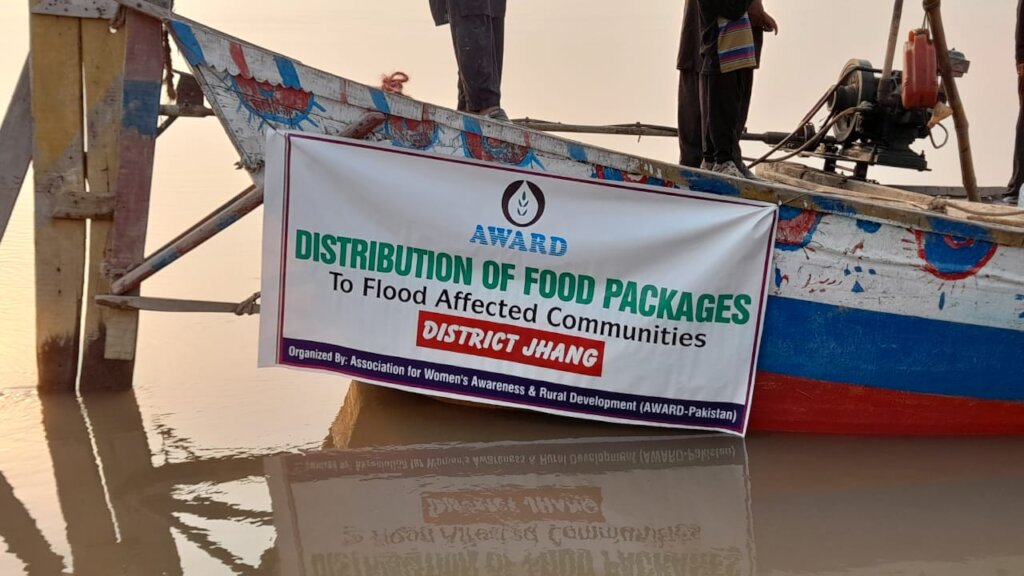 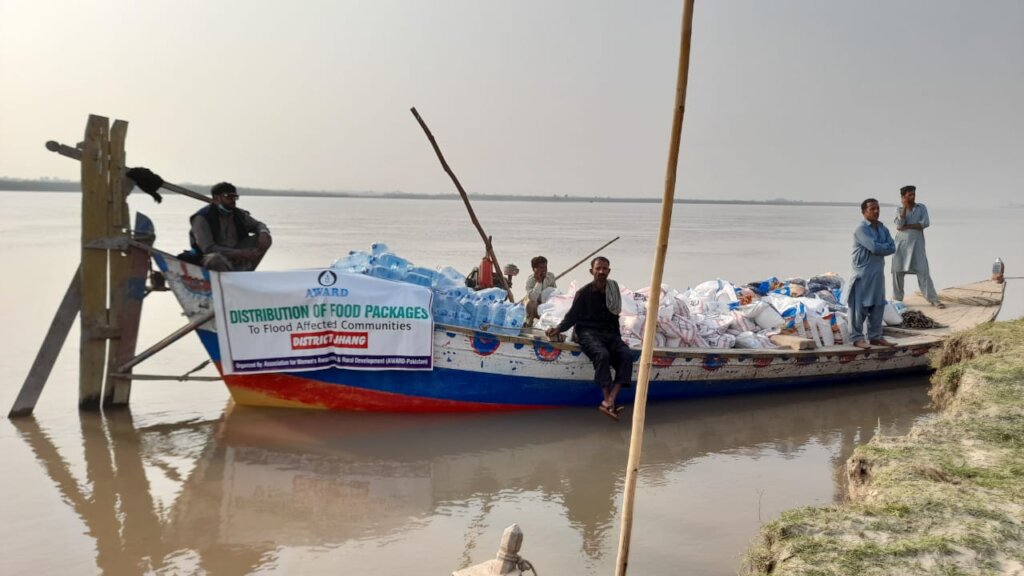 Disaster Risk Reduction (DRR) project was implemented by AWARD Pakistan in the year 2020-2021 in 15 areas of Kot Addu District Muzzafargarrh, The project was funded by GlobalGiving. The funds raised under this project were added up in the main project and the major intervention of the project  which are mentioned below;Due to the COVID-19 consecutive lockdowns, the number of target areas for the Disaster Risk Reduction Program was reduced to 15 from 24.1. Basti Vehniwal2. Basti Tullana3. Basti Muradwala4. Basti Darmanwala5. Basti Nawan6. Basti Halla7. Basti Hassanwala8. Basti Mochaniwala9. Basti Malhay10. Basti Litan11. Basti Kachiwala12. Basti Ganjarrwala13. Basti Talliwala14. Basti Nabiwala15. Basti GurdywalaMeeting with the Key Stakeholders of the target areas:The AWARD team met the key stakeholders of the 15 target areas. The stakeholders included the community leaders especially women leaders, religious Leaders, Political leaders, beneficiaries and male heads of the few families. The team briefed them about the project and its objectives, interventions, self-help base activities and overall impact of the project. All the stakeholders ensured their cooperation and support throughout the project and gave AWARD a green signals to go ahead.DRR Training Seminars:After getting the consent from the stakeholders of 15 areas, AWARD team conducted 15 DRR Trainings Seminars in 15 Target areas in the month of March, April, August, September, October, November of the year 2020 to build up the resilience of the communities to minimize and to reduce the risks of the losses of life and assets. Nearly 1000 community members especially women participated in these 15 sessions. AWARD social Mobilization team of District Muzzafargarh led all the training sessions. They introduced AWARD and its DRR Program (aims and objectives) to the participants. The content of the session were as follows:a) What is a disaster, its types, and its risks?b) Preparations for disaster.c) Risk management.d) Activities after the disaster.e) Action Plan with the communities.Later, the participants were also asked about their losses and damages during the flood. The facilitators gave useful information to the participants about preparations for disasters i-e; how to arrange and save their expensive belongings and precious lives. A number of successful community protective measures models were also shared with communities to improve their understanding and knowledge.At the end, the social mobilizers helped the community members in developing a preventive action plan for their respective target areas, which was discussed during the Disaster Risk Reduction Sessions. The action plan consisted of the following points.a) Announcement in Local Mosques.b) To build small mud hills around the houses and colonies.c) Saving important documentation.d) Collection of Dry Ration.e) Shifting Old, Disables, Children and Livestock to Safe places.f) Switching off the electric sockets.g) Analysis of the surroundings during and after flood.h) Team building.i) Communication with the Local Development Committees (LDC's)The participants also asked questions from the social mobilizers , which were answered in a simplest way. The community appreciated AWARD for its support and effort and for reaching out to them. 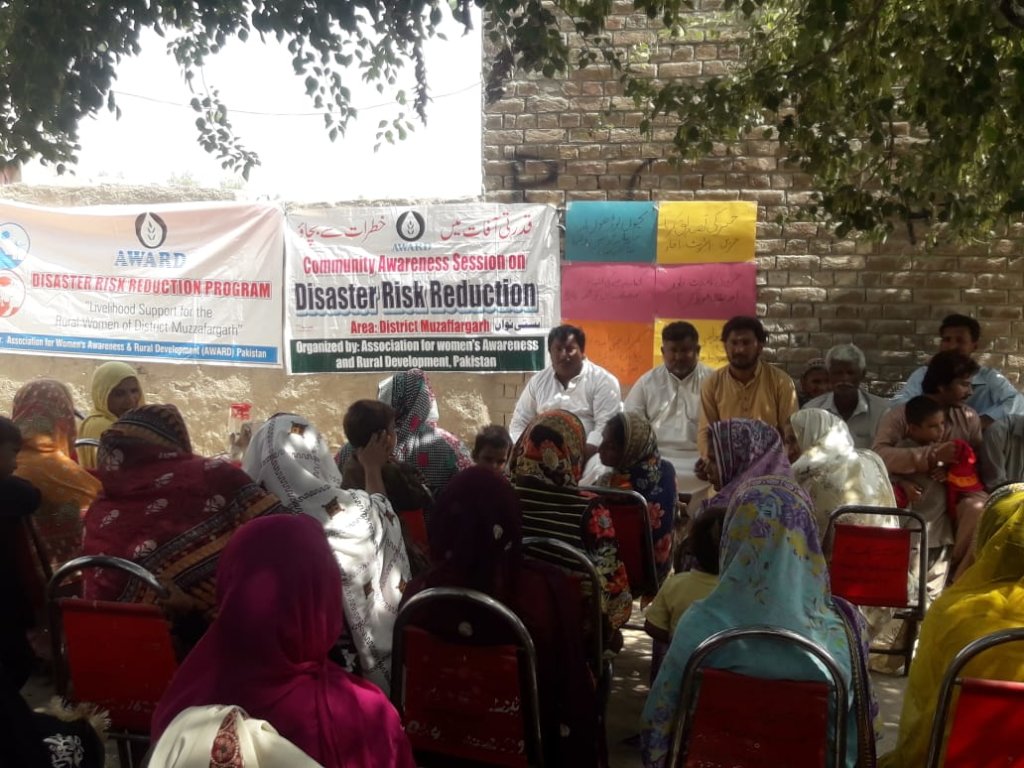 Report on relief recovery for the flood affected in Pakistan 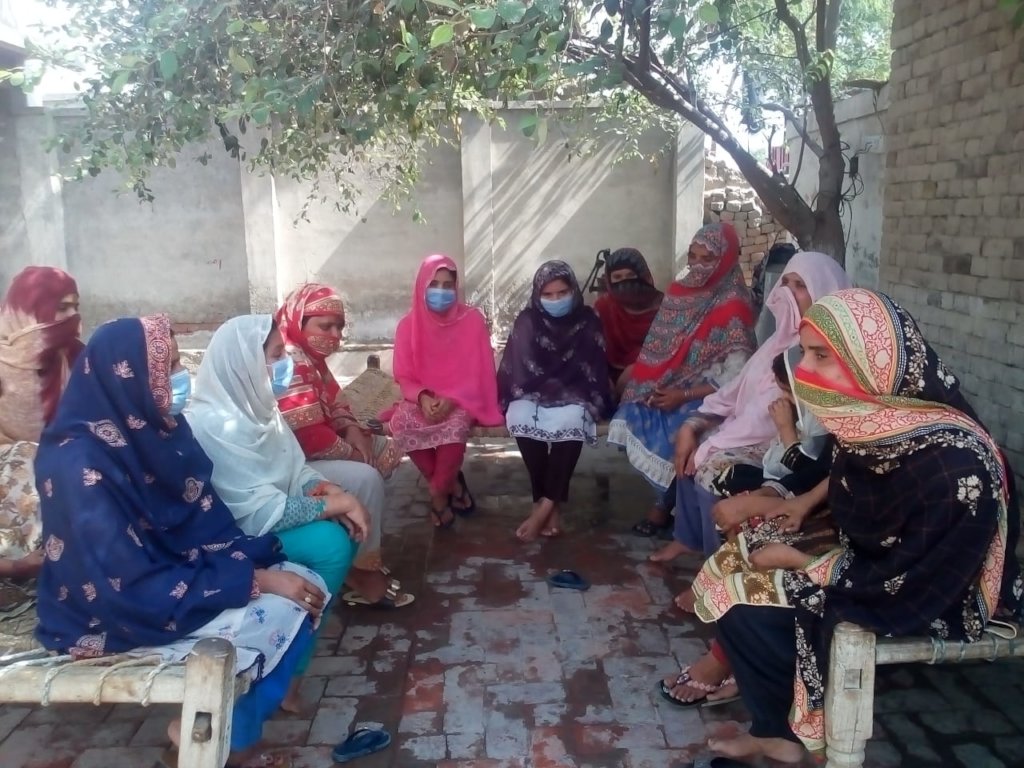 Since last year AWARD has initiated "Women Advancement Program" in the flood affected areas of Muzaffargarh to the stregthen the recovery process by strenghtening the local rural women. The intervention for the recovery are as follows

1) Disasater Risk Reduction Training with the communities in 24 villages

2) Formation of DRR commiitees in each area for early warning and rescue purposes during floods.

3) Provision of small loans  to the women to initiate small business.

5) Monthly educational session to imporve knowledge of the marginalized women.

As the monsoon is arrives every July. There are extreme chances of hundreds of rural areas to be hit by it again. We request all our supporters to help AWARD in providing relief and recovery to the flood affected marginalized communities

one beneficiary having her own livestock

educational sessions with the local women 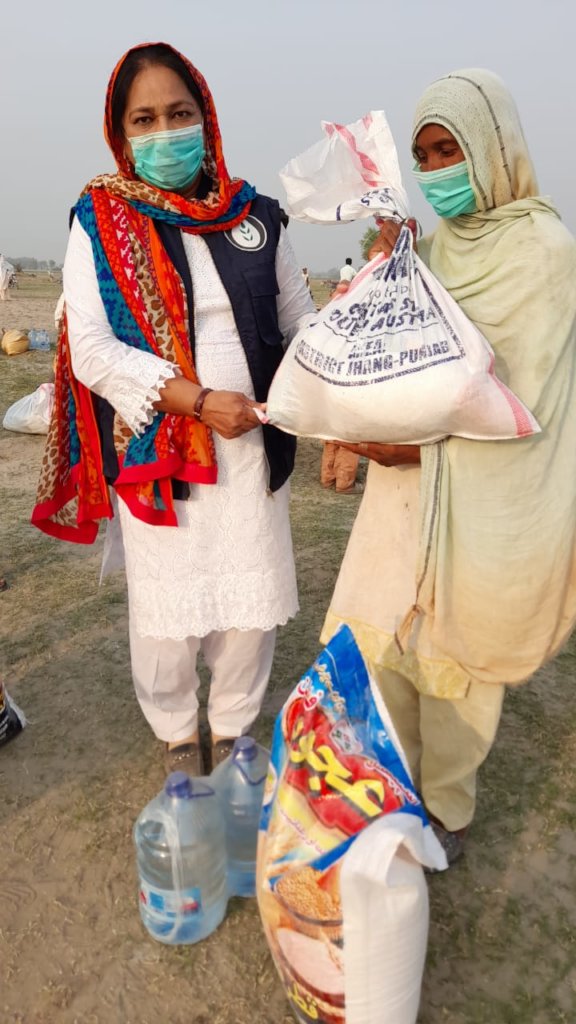 Assessment of the Flood Affected Area:

Assessment of the target areas was a crucial task as most of the areas were under water due to heavy rains and the rise in water level in rivers.From AWARD Head Office,  Mr. Perviaz (Emergency Coordinator),  Mrs. Christina (Executive Director) visited the flood affected areas of Chiniot, Jhang and Athara Hazari and gathered the data from, government offices, key persons, communities and other avaialable sources.The Emergency Coordinator formed a Committee of local people and coordinated with them. Mr. Muhammad Shoukat (Local Focal Person) headed the committee in Athara Hazari.He is a local leader and has been playing an activie for the up bringing of his community.

After the assessment of the flood affected areas, 100 most deserving beneficiaries were selected from 10 pond areas and the areas nearby, by the AWARD team for distribution of food packages. These selected beneficiaires were the most vulnerable and marginalized as majority of them were in very poor condition due to heavy losses of their crops and livestock. Another reason to select these areas was, that their was very little or no access of government and other social workers to these areas as these are situated in deep and distant pond areas in between the rivers . After finalizing the list, the tokens were distributed among the 100 families to ensure the transparency.The community, volunteered themselves alongwith AWARD staff  to  load and unload the food items to/from the trucks and to/from the boat. They also helped to distribute the tokens. They cooperation from the community was very appreciative.

Distribution of Food Items among 100 Families:

AWARD team departed for the distribution of food packages  in Athara Hazari and its Pond Areas from Head Office Faisalabad at 6:30 am. 2 distribution ceremonies were organized by the AWARD staff and the Volunteers. At this occasion SOPs for COVID – 19 by the Govt. of  Pakistan were strictly followed. AWARD team distrubuted the Face Masks and Hand sanitizers to all the beneficiaries in the selected areas for the distribution.

The distribution was started with one of the pond area of Athara Hazari as 50 families from the area received the food packages. Some renowned public figures of the area were also present during the ceremony. The team after completing the distribution in one area travelled to the other pond area where the beneficiaries were waiting for the team.AWARD staff had to travel about 12 KM in the river on the boat to reach the distribution point, where people were already waiting for them.  On the arrival, the team was warmly welcomed by the people. They appreciated AWARD for the efforts it made to reach the needy and the marginalized. The distribution was done with another 50 families  which were selected after the assessment in the rest of the pond areas.

The food packages  distributed among the beneficiaries consisted of food items which were considered enough for the 15 days. All the families were very happy after getting the packages as no other Government and Private organization reached to them during this critical time. They thanked AWARD team for reaching to them.

We urge all of our supporters to help us in reaching the unreached as the need is still there. 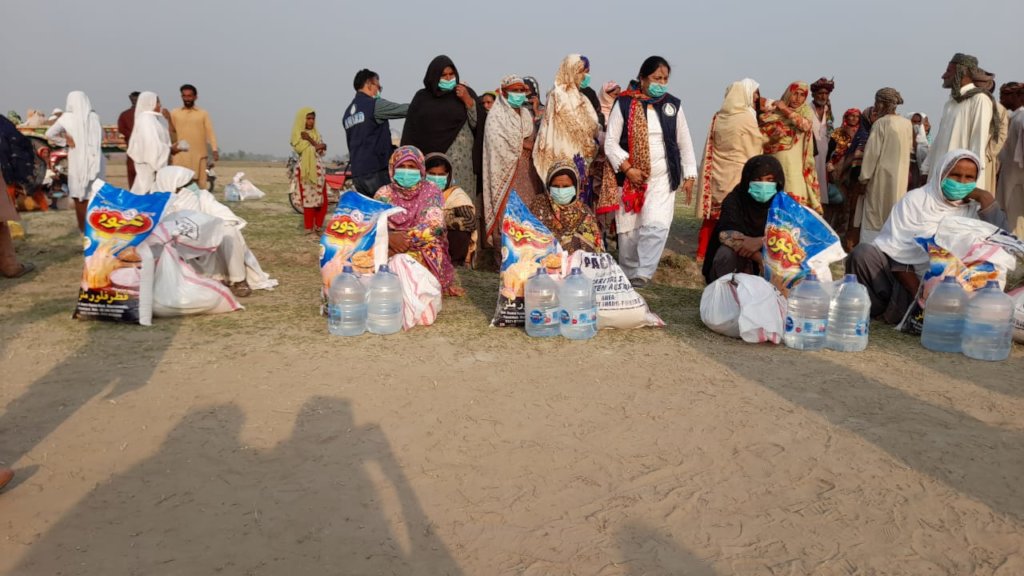 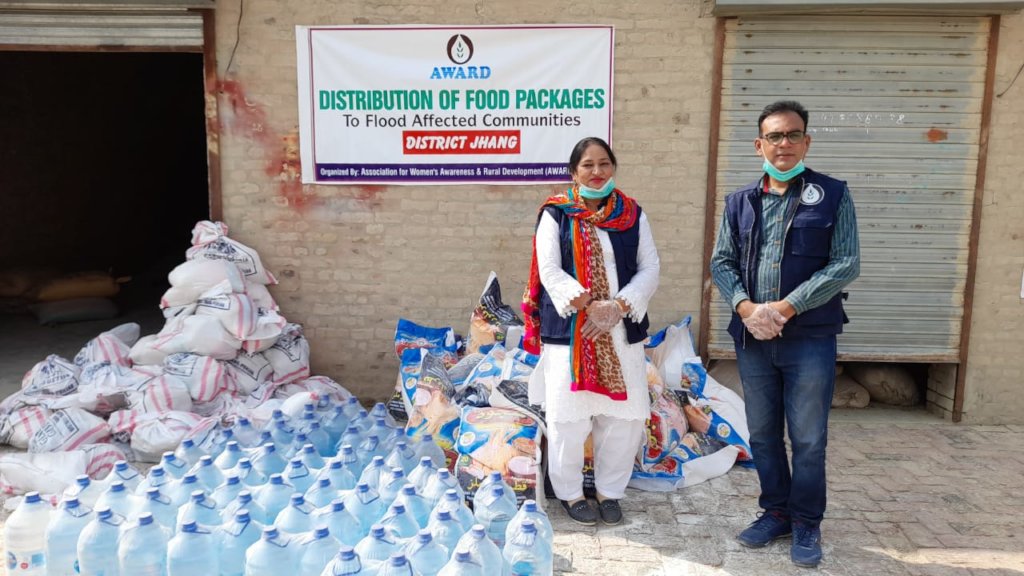 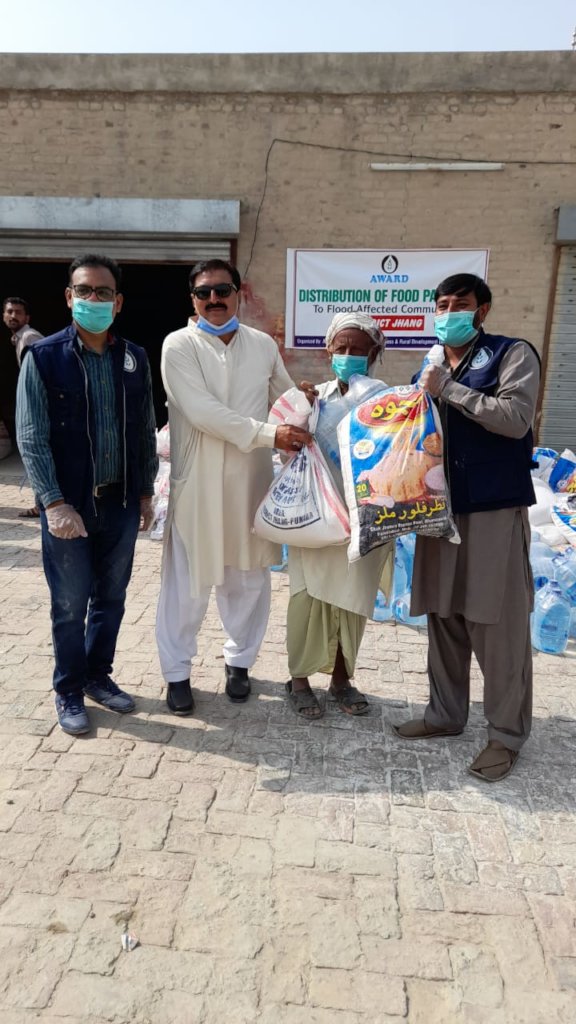 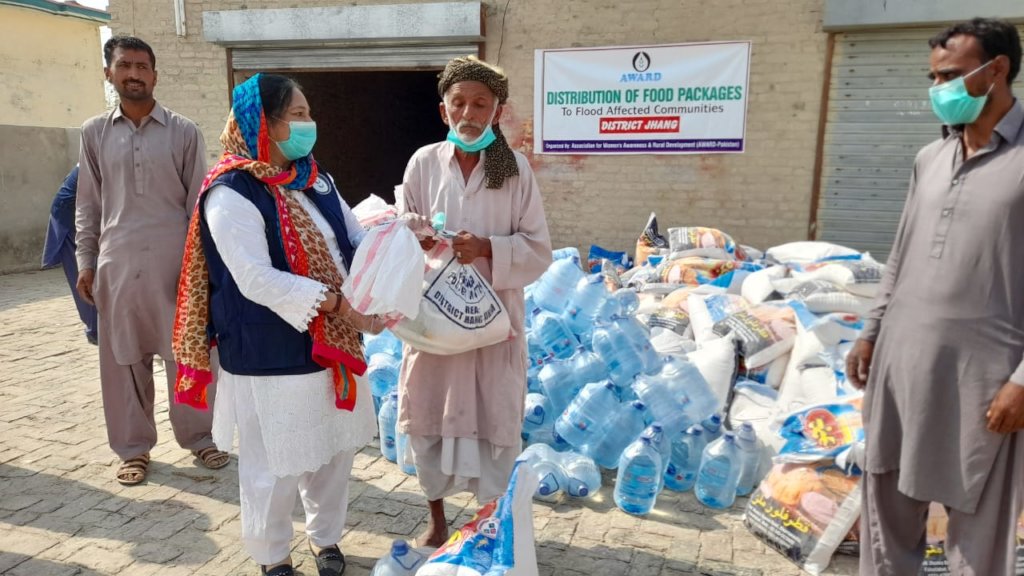 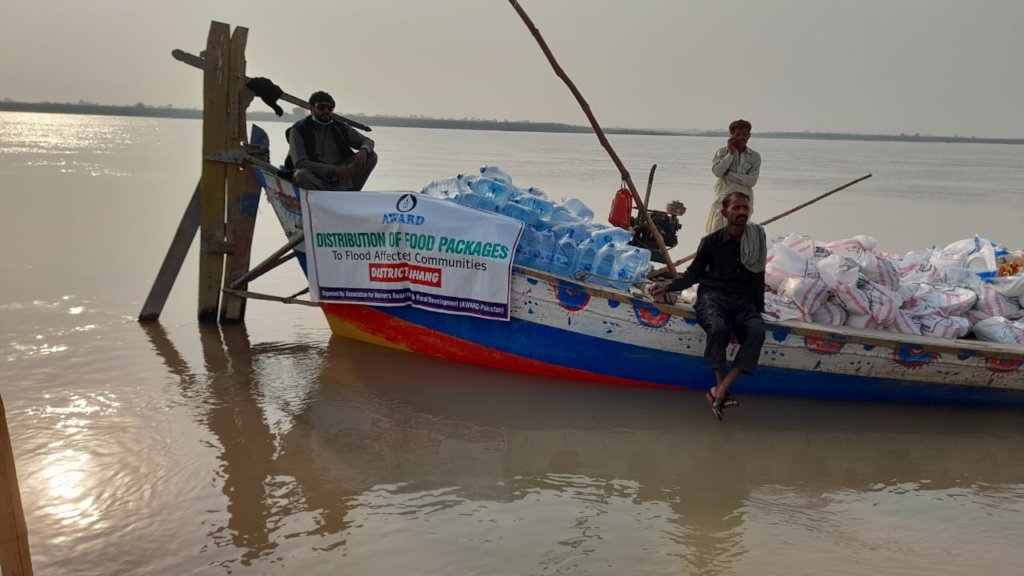 GlobalGiving
Guarantee
Donate https://www.globalgiving.org/dy/cart/view/gg.html?cmd=addItem&projid=48856&rf=microdata&frequency=ONCE&amount=25
Please Note
WARNING: Javascript is currently disabled or is not available in your browser. GlobalGiving makes extensive use of Javascript and will not function properly with Javascript disabled. Please enable Javascript and refresh this page.