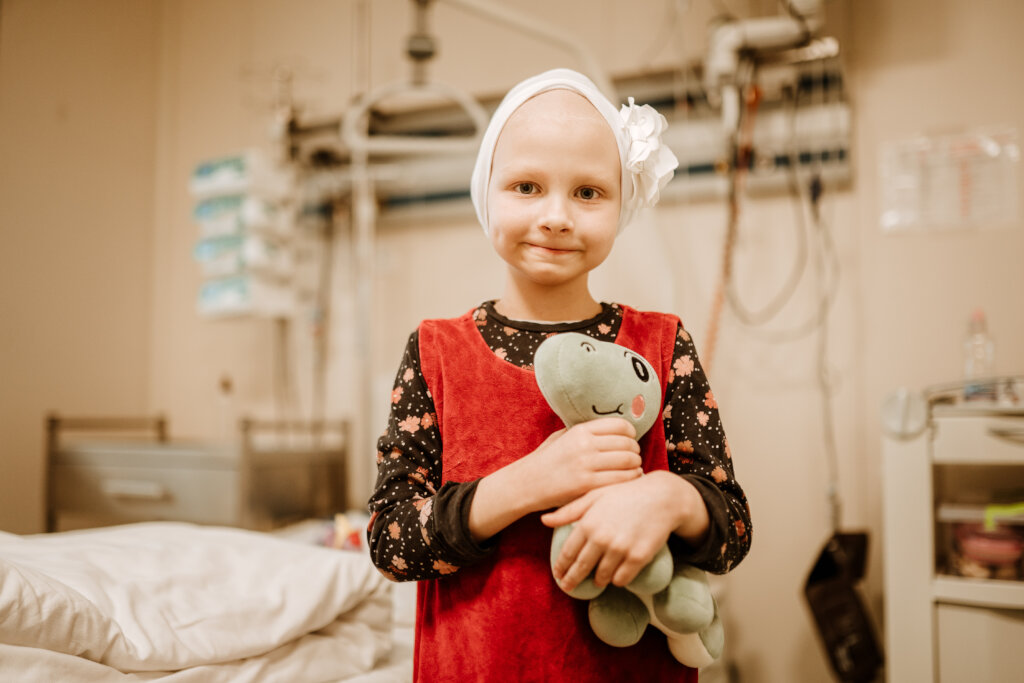 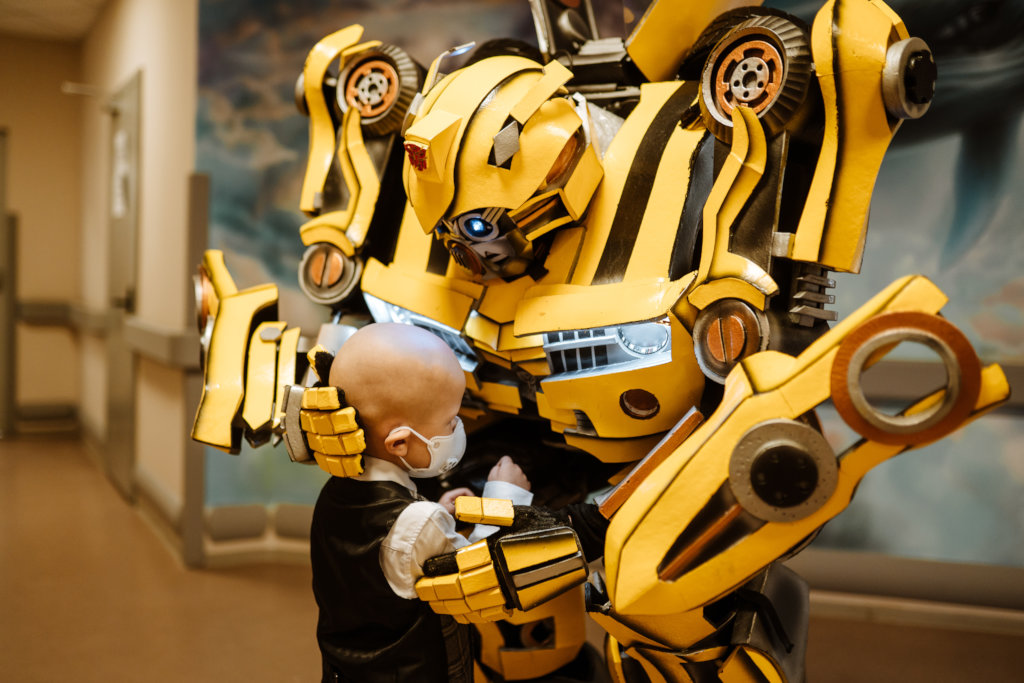 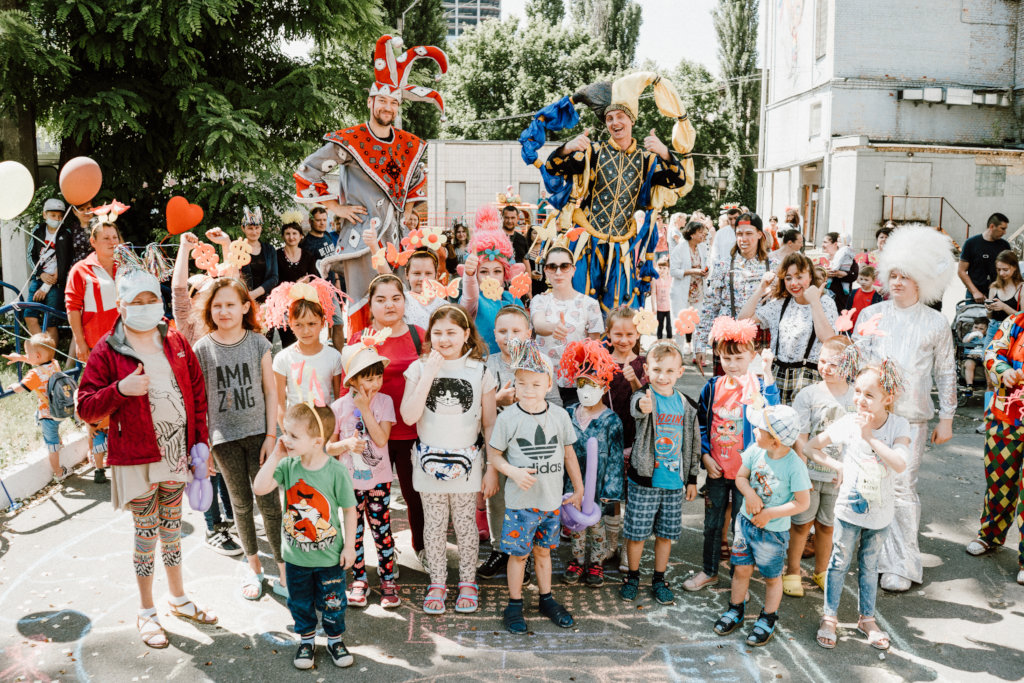 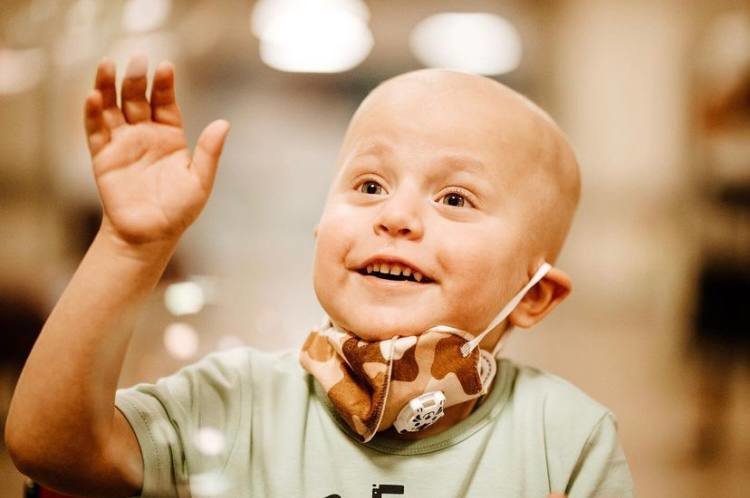 We are incredibly grateful for your support of Medications for Children`s Oncological Units. With your help, children have the opportunity to defeat cancer.

Thanks to you and philanthropists like you, eight children have received an entire course of CellCept in the last four months. One of the children who received a long-awaited bone marrow transplant is Denis.

Denis has been battling blood cancer for almost a third of his life. A bone marrow transplant brought the boy closer to the dream of returning home. A young man from Germany became a donor for Denis. Thanks to his brave act - the donation of blood stem cells - Denis had a chance to recover.

Thanks to your support, the boy's rehabilitation is going fast: he has strengthened, and he was recently discharged from the bone marrow transplant department. Dad, grandparents came to the discharge to be with Denis on this crucial day.

The boy continues treatment on an outpatient basis and is under close supervision of a professional team of doctors.

Children like Denis need your support, and you are responsive to this request.

Thank you for that! 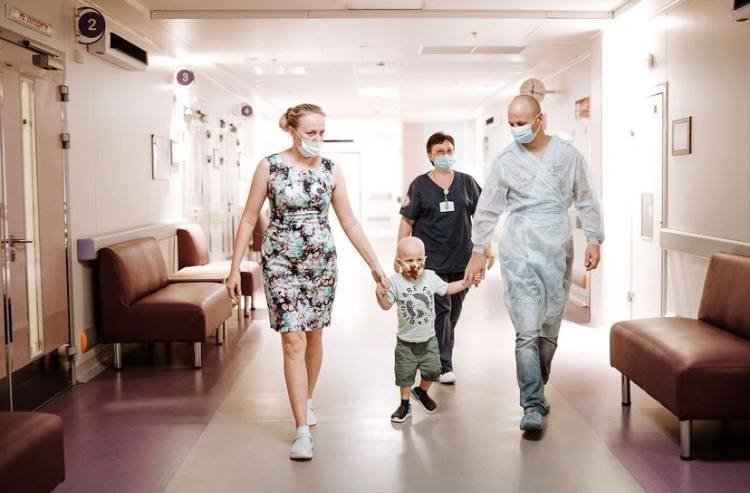 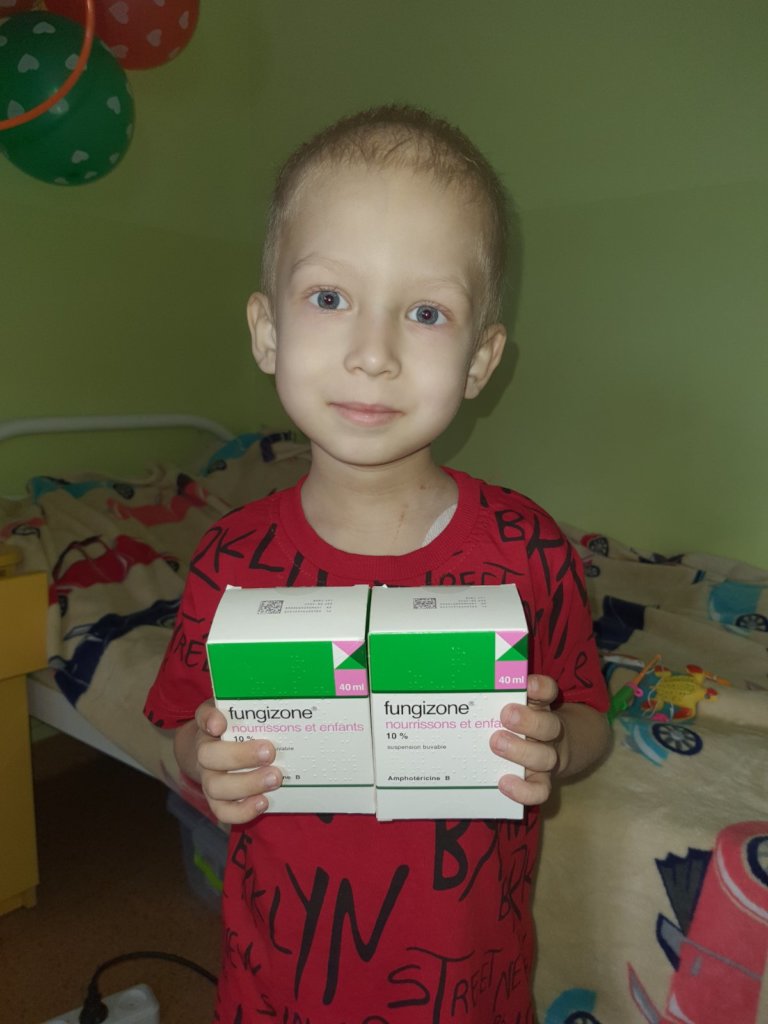 We are pleased to tell you about the new changes in the lives of children with oncology, which have been achieved thanks to your support.

During cancer treatment, children often develop fungal infections of the mouth and food paths, making it painful for them to swallow and eat. Artem and Yegor met this very problem and needed help to overcome a fungal infection.

To treat these infections, doctors give them antifungal drugs intravenously, but the most effective treatment of such lesions is suspensions for drinking.

Unfortunately, the last ones are not registered in Ukraine, so volunteers help the fund to bring it from abroad.

Thanks to your help, Artem, Egor and 26 children like them received 119 units of this medicine for the last six months. Now they can eat and swallow without pain, and it really makes their life easier, and the treatment more effective.

This significant improvement in the boy`s hospital living made possible thanks to you and philanthropists like you.

We are truly grateful for your thoughtful gift, generously contributed to the vital cause. 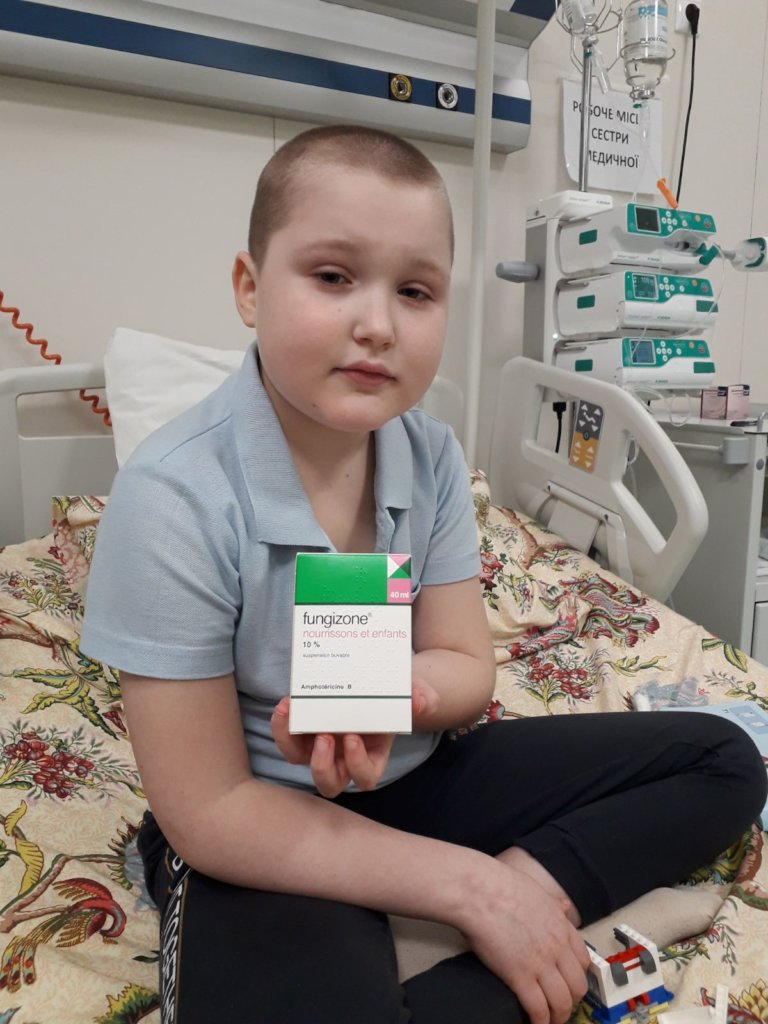 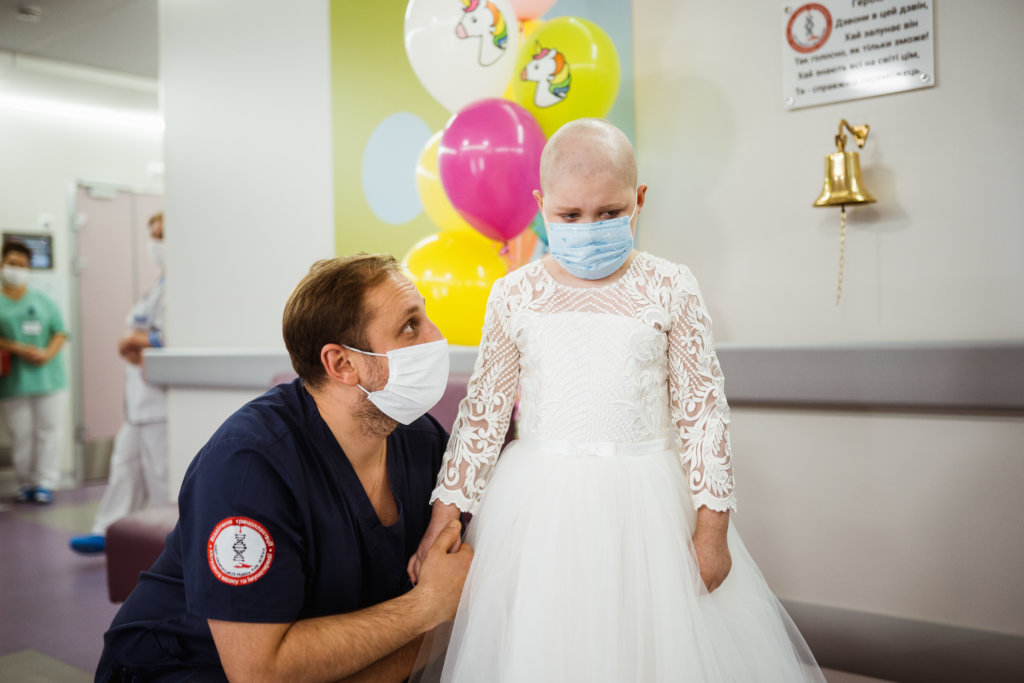 Too much emotions to keep them inside

Thanks to your generous donations we continue our efforts to improve situation with pediatric oncology in Ukraine.

Since our last report there were a lot of news we would like to share with you. The most important one is that National Specialised Pediatric Hospital has launched an unrelated bone marrow transplantation (BMT). Many people have been working for several years to make such treatment possible in Ukraine. The second and the third transplantation took place in August 2020.

We celebrate the victory, but the fight continues. The number of unrelated bone marrow transplantation is still not sufficient for all children who need it. And even those cases were not fully covered by governmental program. Thanks to the donors like you Tabletochki foundantion provided necessary medicines needed for recovery after transplantation.

Unfortunately, there are also anxious news. Centralized public procurement of medicines for year 2020 was failed. The shortage with medicine became a burden on families and foundations. The number of medicines requests from pediatric oncology units to the Foundation increased and we expect that it will last for at least nearest half a year while the gap in governmental supply exists. There was no any supply under governmental program till the end of 2020. In an optimistic scenario first deliveries are expected in January-February 2021. That is why your support is needed more than ever.

Despite the scale of problem any of your gifts is really matter. Just look at the pictures attached to this report. We would like to share with you the most emotional moments: 8-years Darina is leaving the hospital after successful BMP from unrelated donor. Together with her doctor she is ringing a winner's bell. And that this you who made it possible. It’s your victory too. 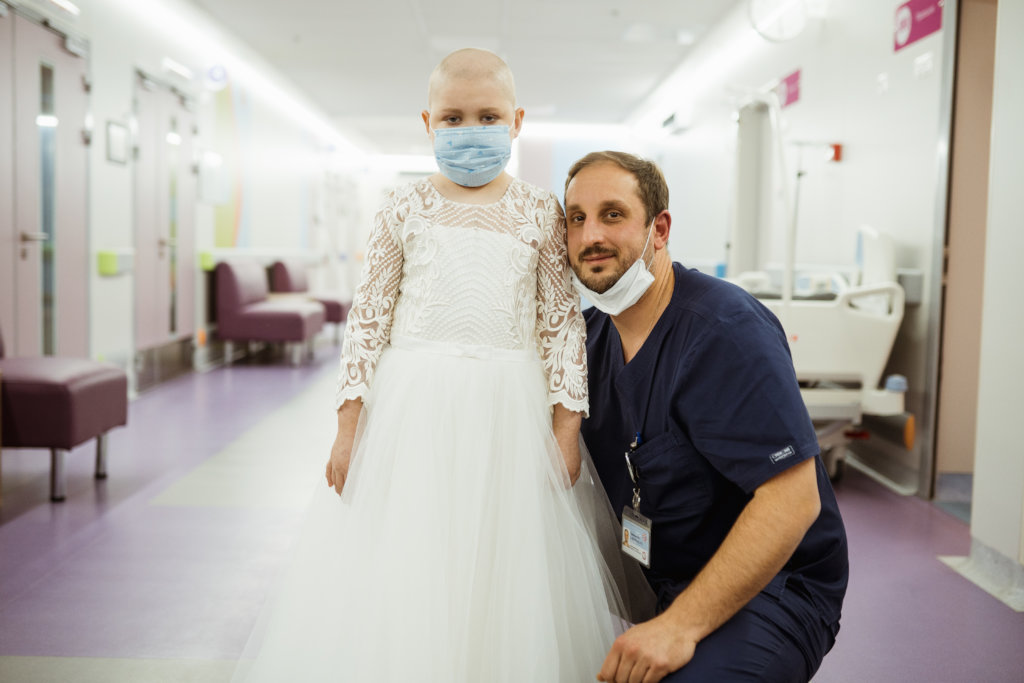 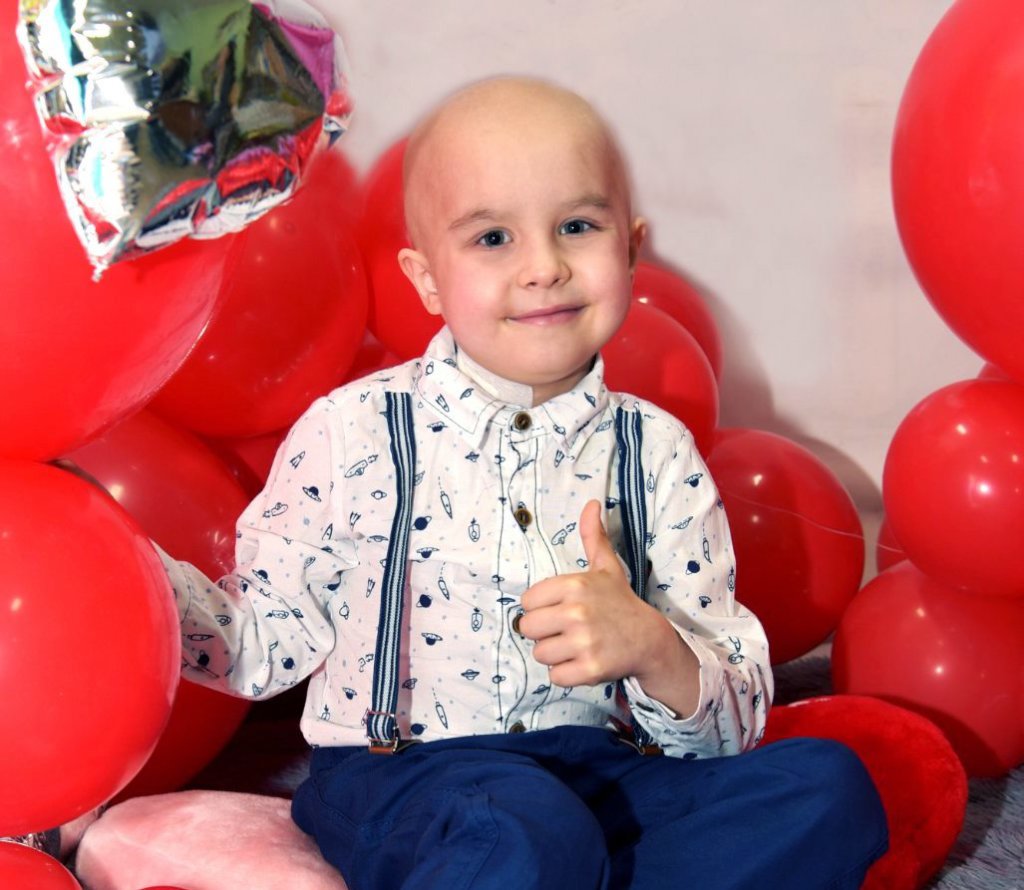 Thanks to your support children who fight cancer received medicines and supplies in April-June 2020 amounted to $ 368129. $ 94985 was spent for targeted assistance for children whose families have applied to the Foundation for help, and $ 267219 to help 17 children's oncology departments all over Ukraine. Administrative costs for the project amounted to $ 5925.

Little Alexey, 5 years old – our ward has been fighting cancer since last September.

Only the complete absence of hair discovers this affable, even-tempered boy with impeccable manners as a patient with a complex type of blood cancer. Many months of difficult treatment, and since March 2020 - also in strict quarantine. Alexey is not discouraged and not capricious. He's practicing math - easily adding and subtracting three-digit numbers, assembling a LEGO Ninjago and getting ready to start school in the fall.

But for this, very expensive vital medicines for him - Ervinase should be purchased and brought to Ukraine. We are thankful to all our donors who help the boy to go to school next year.

In 2015, Katya was diagnosed with lymph node cancer. Katya’s family began to fight for her life, but after 8 months of treatment, the girl had a relapse. Katya underwent 2 blocks of anti-relapse therapy and auto-BMT. After that, almost 3 years of LIFE. She caught up with the school and managed to get into the 7th grade. The girl began to grow and develop, but the tumor also began to grow again.

For 5 years Katya has been fighting cancer and the disease has been partially overcome. The girl's mother says that after a long and painful treatment, the tumor in the mediastinum has decreased by half. Now the most important step remains - stem cell transplantation.

For the successful transplantation, it is necessary to carry out high-dose chemotherapy with the drug Tiotepa (Tepadina). The drug is not registered in Ukraine and, given the quarantine restrictions, requires the involvement of many people in order to find, buy and deliver it on time. But nothing is impossible when there is help from caring and incredible people. Thank you, our volunteers and donors who help Katya to survive!

Tonya is 17 years old. She has a large and friendly family that helps her to fight the disease for the second time. Katya is studying to be an interior designer. Tonya began to come as a volunteer to her department, where she was receiving treatment, and engage in creative activities with children, told how she was treated and what is most important is to be positive.

No one expected the relapse after more than 8 years of remission have passed. Tonya’s mom said that they did it once, so they can do it again – win against cancer. The most disappointing thing for Tonya is that she can’t see her siblings and younger sisters are growing up.

Tonya will have bone marrow stem cell transplantation, and in order to achieve complex remission, she needs to undergo immunotherapy with the expensive drug Darzalex (Daratumumab). The drug was only recently registered in Ukraine and the manufacturer has not yet had time to officially import it into Ukraine. We are thankful to all the caring people who help to find the medicine for Tonya! Thank you! 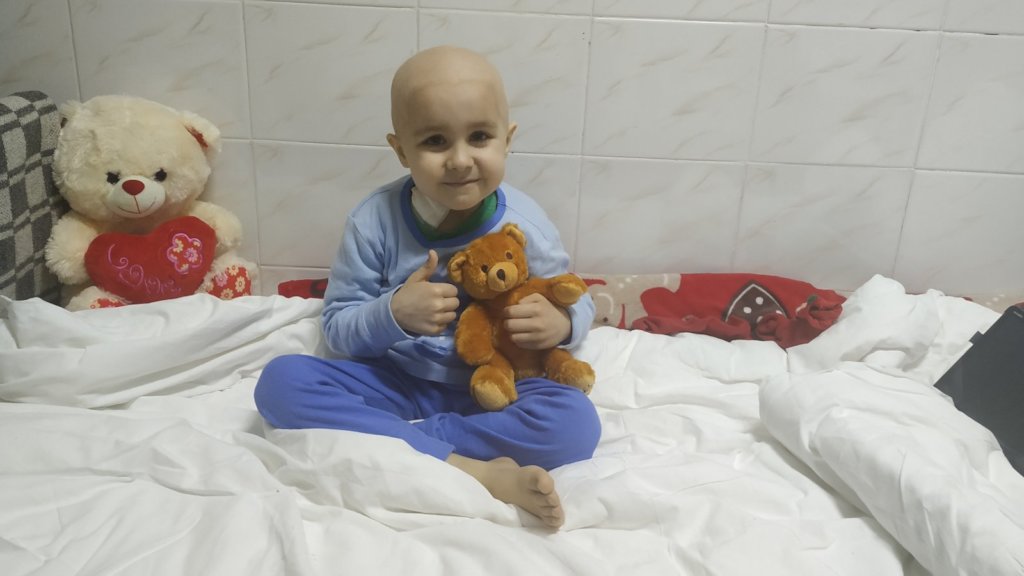 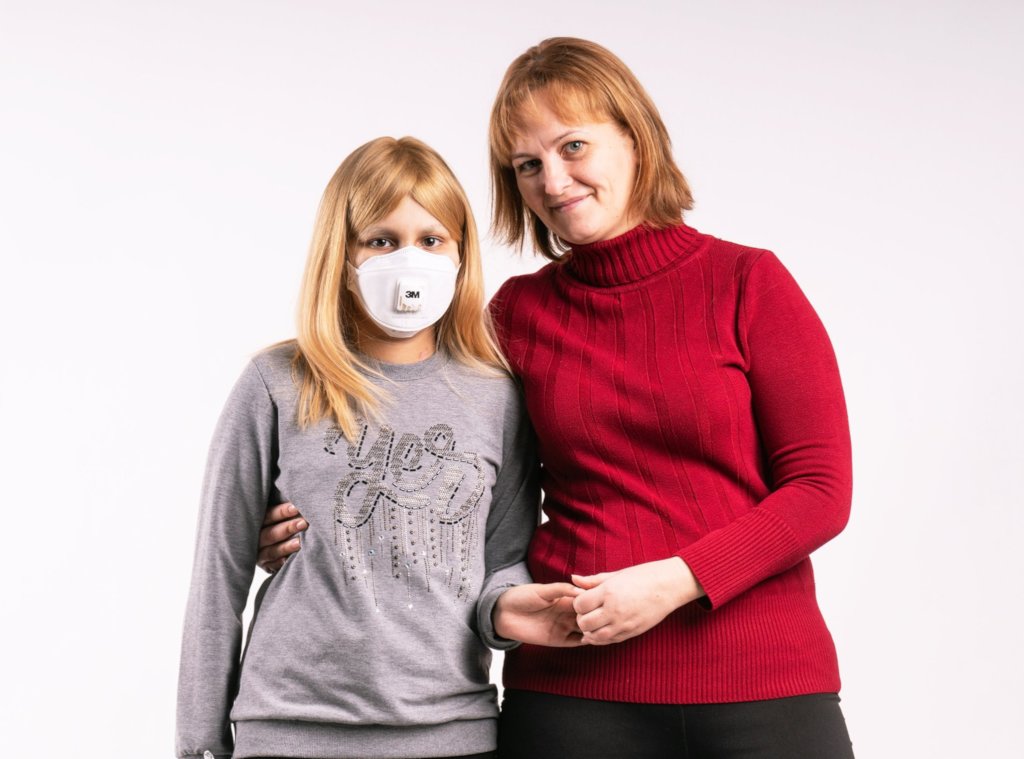 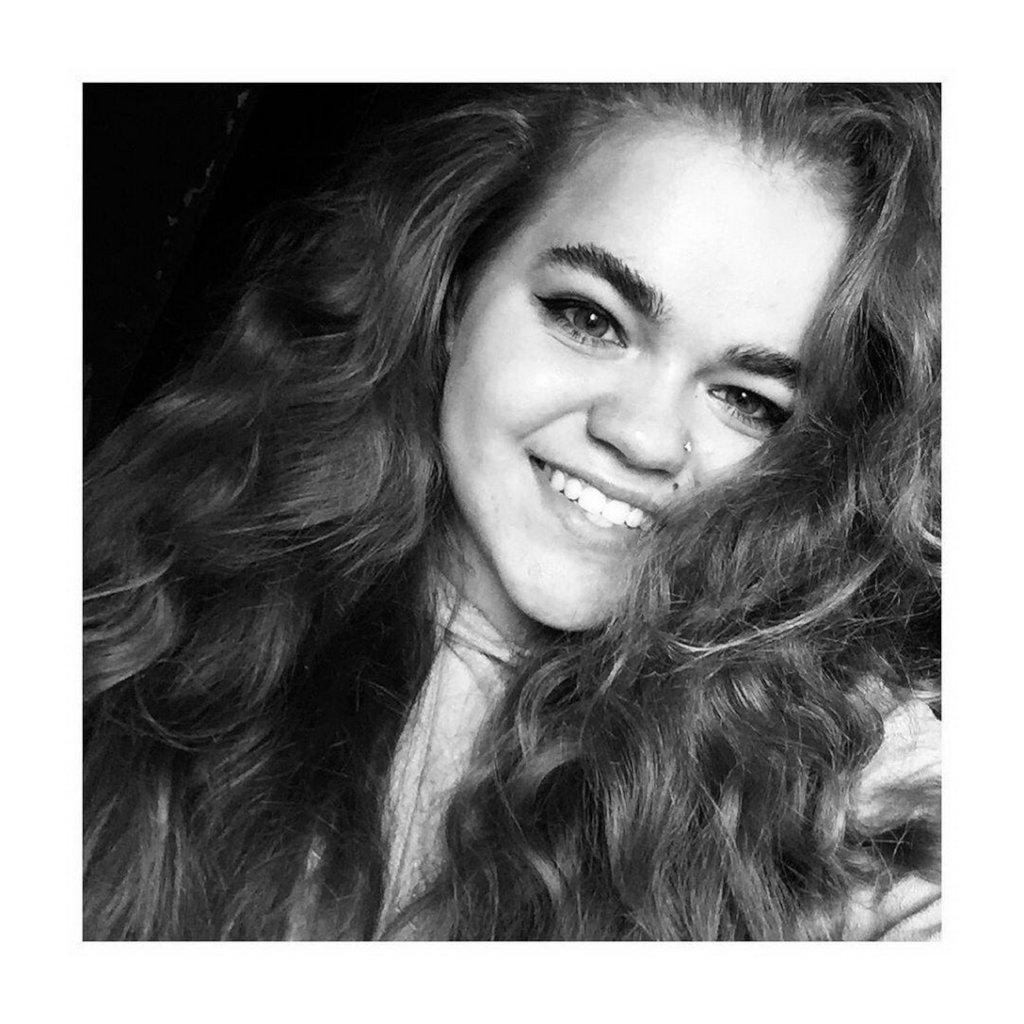 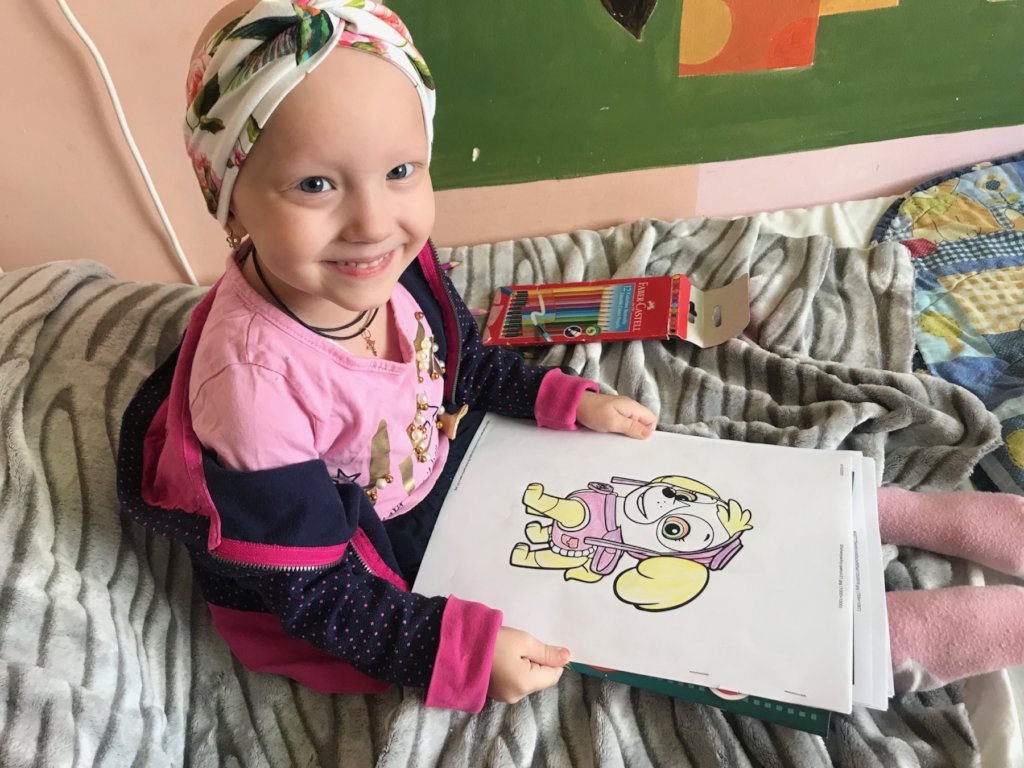 The total expenses of the Tabletochki Charity Foundation for medicines and supplies in January-March 2020 amounted to $ 265008. $ 91369 we spent for targeted assistance for children whose families have applied to the Foundation for help, and $ 170322 to help 17 children's oncology departments all over Ukraine. Administrative costs for the project amounted to $ 3317.

Besides the regular medicine in this period our Foundation had to buy a lot of personal protective equipment to protect our children under care and doctors from COVID 19. We already spent $ 9539 for this stuff in March – in the very beginning of the epidemic in Ukraine.

And here is a story of one of our wards. The 4-year-old Solomiya is very inquisitive and cheerful. She is interested in everything around: every grass, plant, insect and animal. She loves to draw, dance, play with dolls and cook for her mom and brother. Her favorite cartoon is "Frozen" because of the music.

The disease came as a surprise. It is very difficult for a baby to be locked in four hospital walls and to be tied to a drip after a normal life. Every manipulation is painful for Solomiya. It’s always tears ... tears for her and her mother.

The girl went through a difficult and long way of treatment, one duct and three blocks of high-dose chemotherapy, after which it was very difficult. There was a mucazide, when the whole oral cavity was covered with wounds and mucous. Everything passed a little and Solomiya got better. And she said, "Mom, I can talk now, you love my voice so much when I talk!"

Most of all, she wants to recover and return home to her brother! She dreams of Elsa's dress, a ride on a swing and ice cream.

Solomiya's mother is grateful to the Tabletochki Charity Foundation and all of you - our donors for purchasing expensive medicines at such a difficult time for everyone during the lock down period.

There is still a difficult way to continue chemotherapy and bone marrow transplantation. But with your help, this little girl will overcome everything! Thank you! 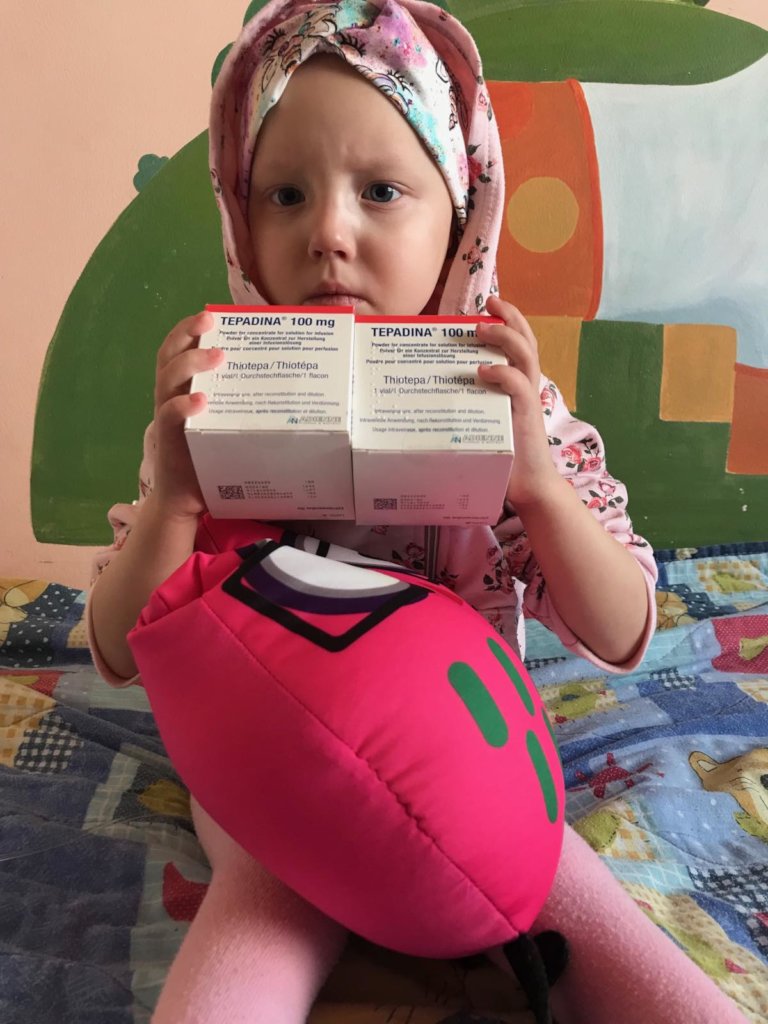 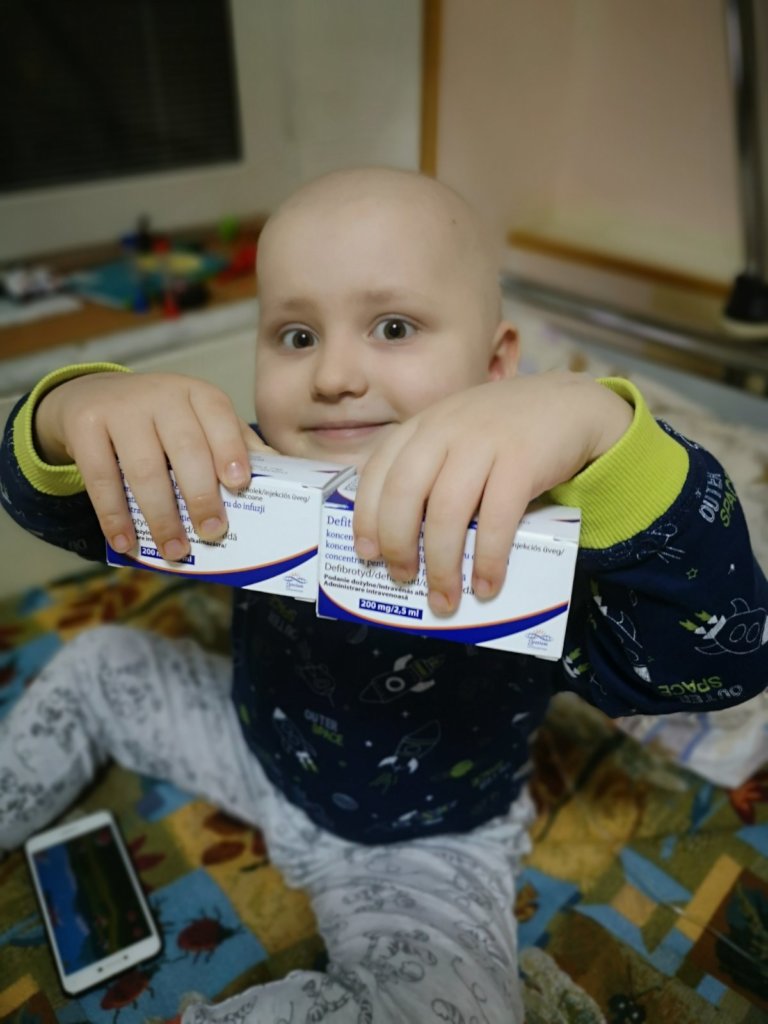 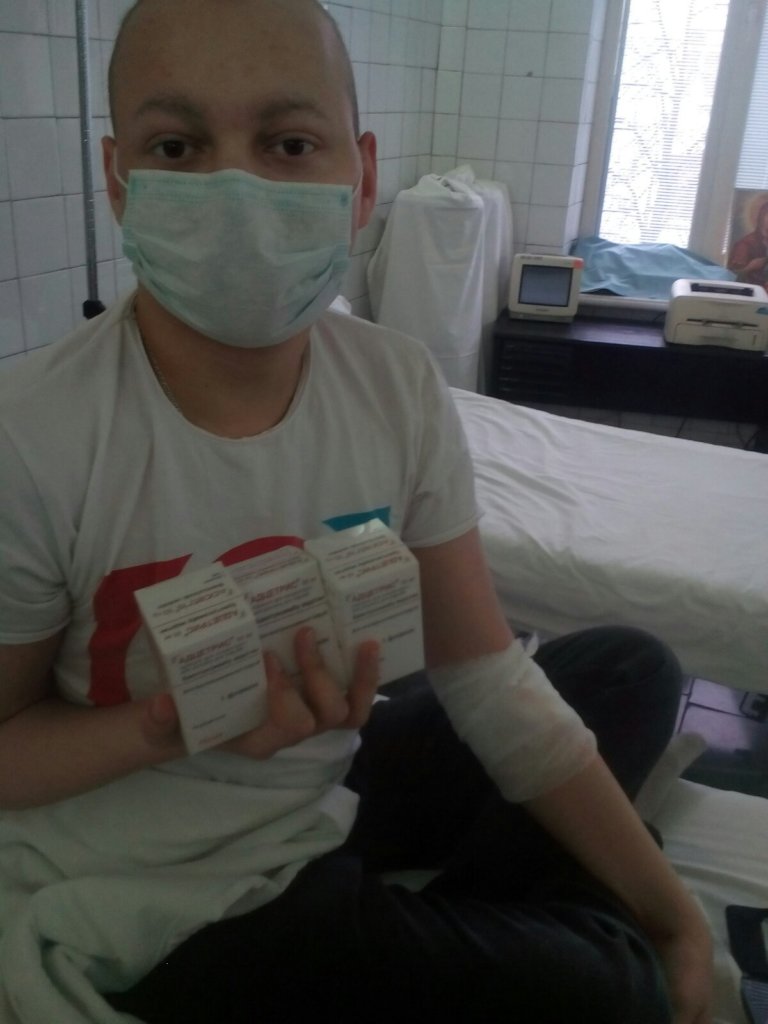 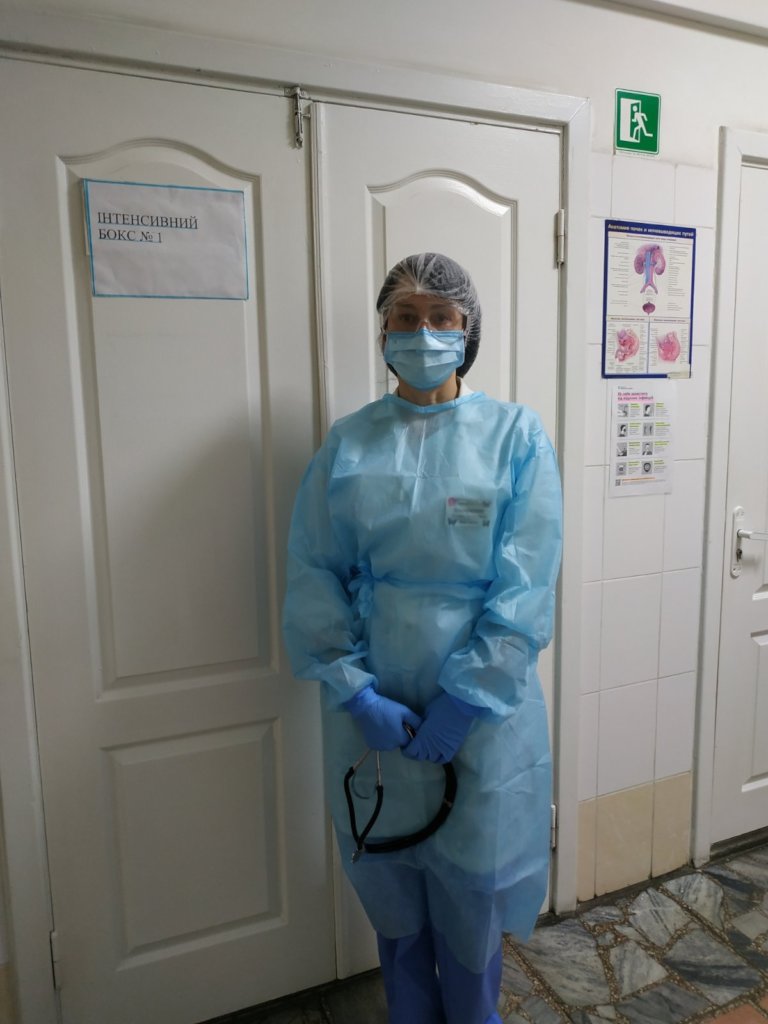 GlobalGiving
Guarantee
Donate https://www.globalgiving.org/dy/cart/view/gg.html?cmd=addItem&projid=23161&rf=microdata&frequency=ONCE&amount=25
Please Note
WARNING: Javascript is currently disabled or is not available in your browser. GlobalGiving makes extensive use of Javascript and will not function properly with Javascript disabled. Please enable Javascript and refresh this page.