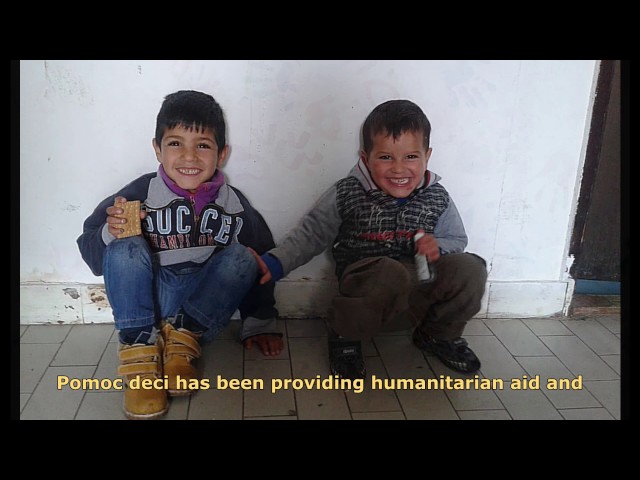 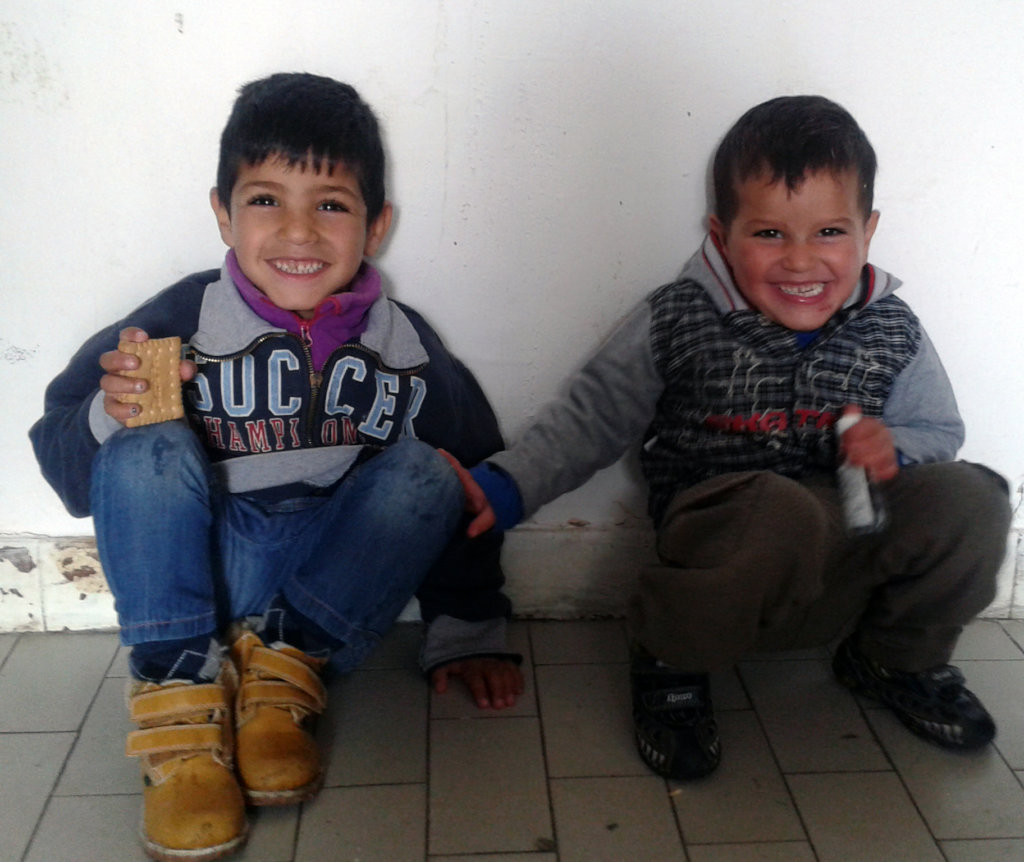 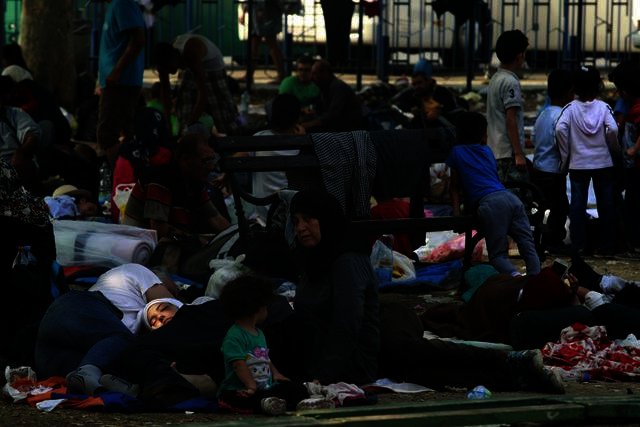 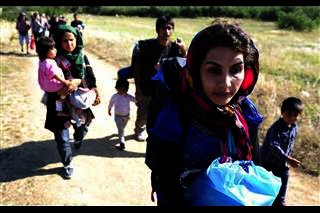 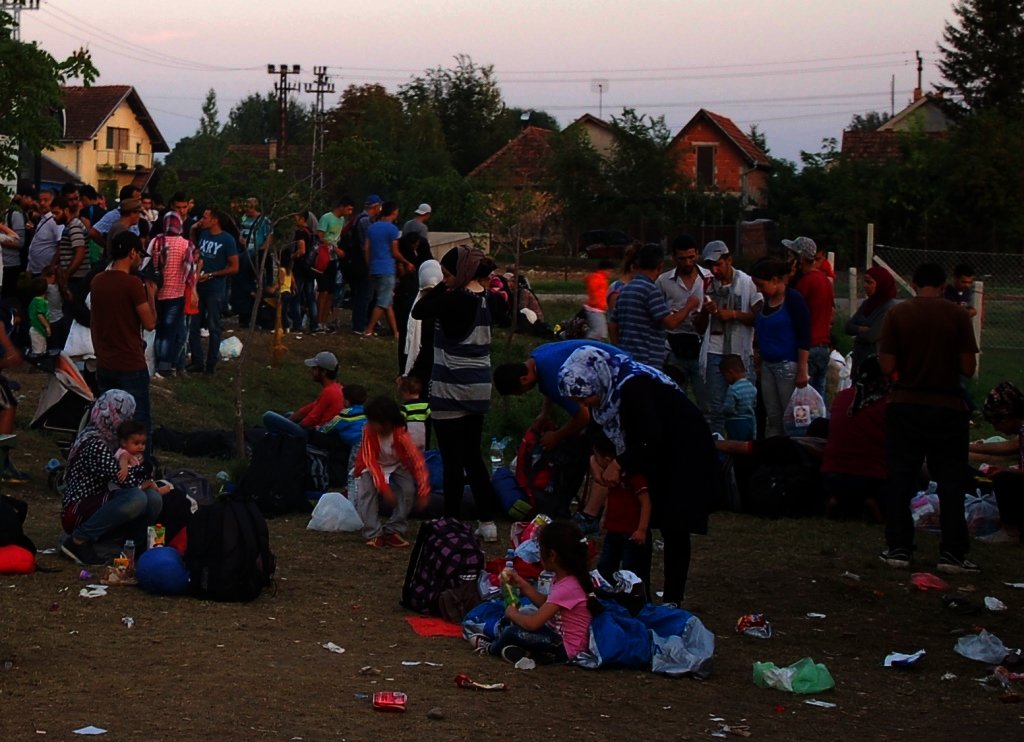 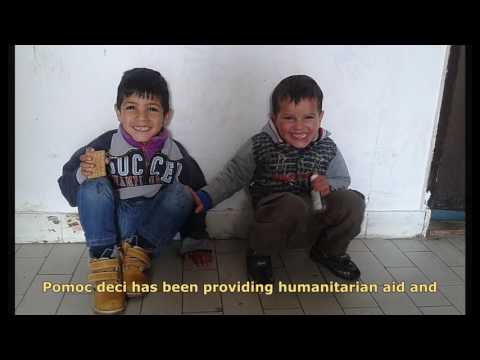 Selene and Sami Need Our Help! 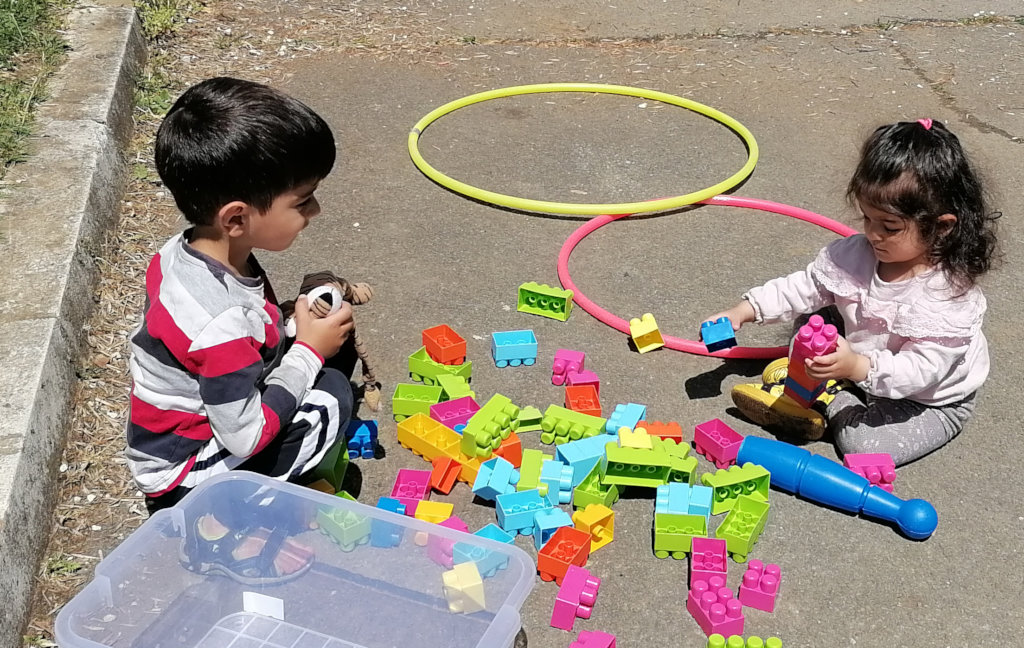 Little oasis of stability for Selene and Sami

When little Iranian girl Selene was born in early 2019 in the Refugee Camp in Bujanovac in south Serbia, her, then, five-year-old brother Sami had already been at that Refugee Camp for a year and a half. And prior to that he had had the experience in the camps in two other countries.

Sasaninejad, their mother, was locally called Rosa by our local volunteers and was always them and other Middle East migrants settle.

As we were working with the families in this camp and knew the situation, we helped immediately with a humanitarian package for the new born Selene. Our providers of the psycho-social assistance have been celebrating Selene’s first and second birthday with her family and other migrants at the camp. As Selena is growing, she has started speaking some words in her language, in Serbian and English and Sami, her brother, has started going to school, has learnt both English and Serbian, has even learnt to work on computers during the online tutoring last school year. In the meantime, the family was moved to another camp, was called for the interview to legally enter Hungary on their way to Germany, but were refused the pass due to high number of COVID-19 related cases in Hungary at the time, were returned back to the first camp and now, have been moved to the third Camp.

Your donations enabled us to ease their transitions by keeping Selene’s and Sami’s daily schedule familiar. Used to workshops, language courses and regular play times with other children and our staff, not only Selene, but Sami and their mother have adapted to the new environments in relatively short time. Sasaninejad started also helping us and other migrants, assisting us in organising games for children, cooking classes for mothers, in making contacts with newly arrived migrants…

Now, they have to move to yet another camp again since the one where they are now will be temporarily closed for the renovation works. Little Selene and Sami have to leave their friends again, get into an unknown once again. Their mother is sad, worried for the future of her children and just wants to settle somewhere: “They don’t have home, they have never had any normal life. I don’t know what to do any more. If we would be denied entry to Hungary again, I would even contemplate going back to Iran. We can’t keep moving from one refugee camp to another.”

These little children and their families need our help. They need all the psycho-social support they can get. We need your support to provide at least this support to them. To help Selene and Sami adapt to all these camps, new people constantly in their lives, new uncertainties, to get through all the things they cannot understand and grow with as little trauma as possible. 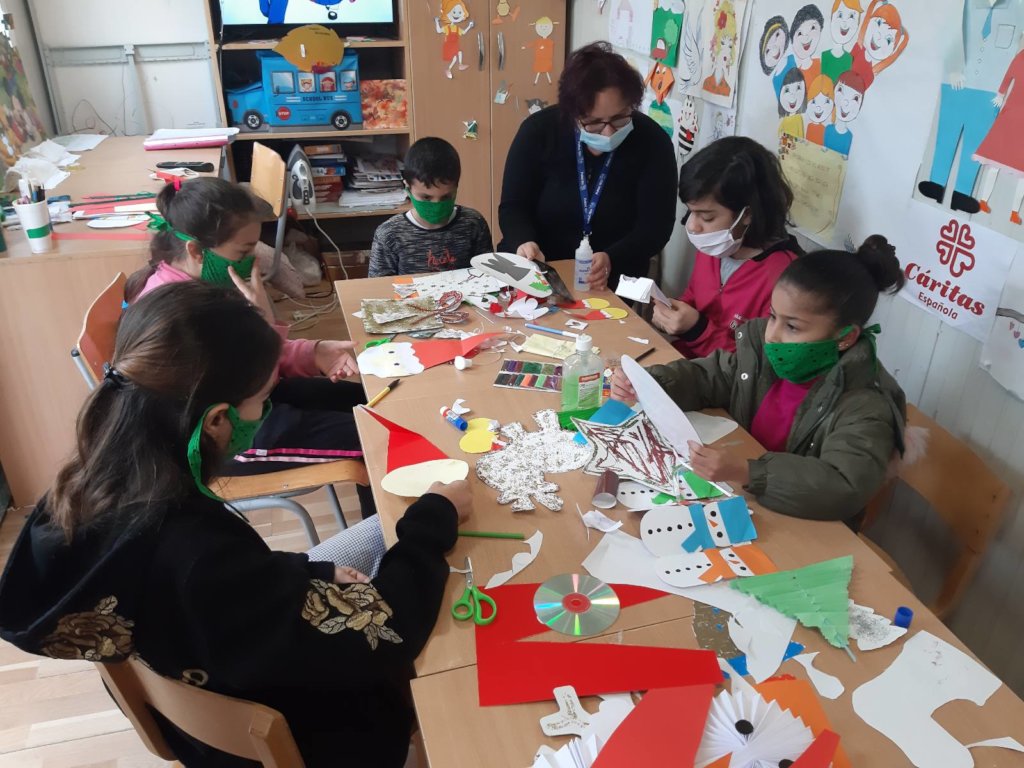 Winter is a magical time. Over the past three months, children enjoyed a series of winter-themed activities with our psycho-social activities coordinator. These activities are meant to engage and stimulate children, get them to relax and spend time with peers their own age, something that is so very vital when their lives have been uprooted and not much of their future is secure.

This year, faced with the ongoing risk of COVID-19, children worked outside as much as the weather allowed them to do so. When not able to, we organized for them activities where they could be around their friends, while working on their own.

One of these activities was the now annual tradition of making cards to celebrate Serbian New Year for residents of local nursing homes. As the pandemic did not allow them to go inside and give the cards in-person, they could only bring them to the front door of the nursing home. In exchange, children get a small present from the elderly – a cookie, a card, and a toy.

One of the young girls that participated in the tradition said that she’s happy to make cards for them as isolation can be lonely and it is always nice to do something nice for others. The kids did not know they would be getting a present in return, and their smiles and excitement were blinding!

Truly a lovely celebration during a difficult time.

We hope this small update has brightened your day wherever you are. If you did not know, GlobalGiving’s recurring donation match has been extended into 2021. If you make a recurring donation today and keep it for four months, your first donation (up to $200) will be matched at 100%. 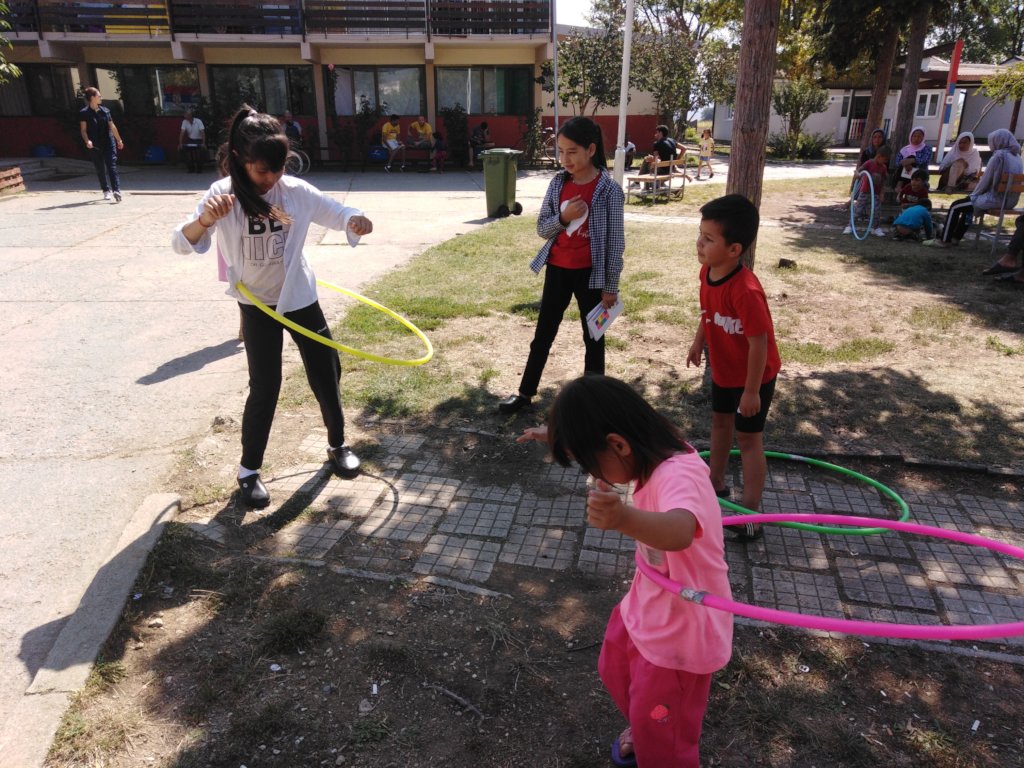 Despite the pandemic, refugee centers have been welcoming new families and bidding adieu to the ones leaving the southern Serbian region. One of the difficulties of being in a refugee camp during a pandemic is the lack of proper socialization. Cooped up inside, with limited forms of social interaction, makes it, especially for children to thrive.

At a time when it becomes difficult to add exercise to their daily routine, it is important to take advantage of warm and sunny days in a time where those days are scarce. So, on one of the last warm and sunny days of the year, our psycho-social support coordinator took a group of children to hula hoop. Benefits of hula hooping are immense, but above all, they are a fun activity that can be done in a group or with children on their own, all the while respecting social distancing measures. The activity provides children with an opportunity to, through a game, develop and boost their motor skills and coordination. At the end of the day, it proved to be a good activity for children to get to know one another. There is a constant change of those living in refugee centers so it sometimes becomes difficult for children to make friends or get to know their potential friends.

One of the boys who was part of the workshop says that "the activity was fun and it allowed everyone to make friends". Socializing is an important part of children's well-being and it is now, more than ever, necessary for children to take part in such activities.

We want to be able to continue organizing activities such as these for young children to help them and keep their mind off the stresses of being a refugee in a foreign, often temporary country.

The work that we do is entirely dependent on the support from people reading these reports. The bulk of our income comes from GivingTuesday. This year on December 1, we invite you to help our work and mission to help children in Serbia and are asking you to make a donation. No matter how small, GlobalGiving is committed to helping us in our goal and will be donating a portion of the bonus prize to each organization. The more donations we get on December 1, the higher our bonus prize will be! 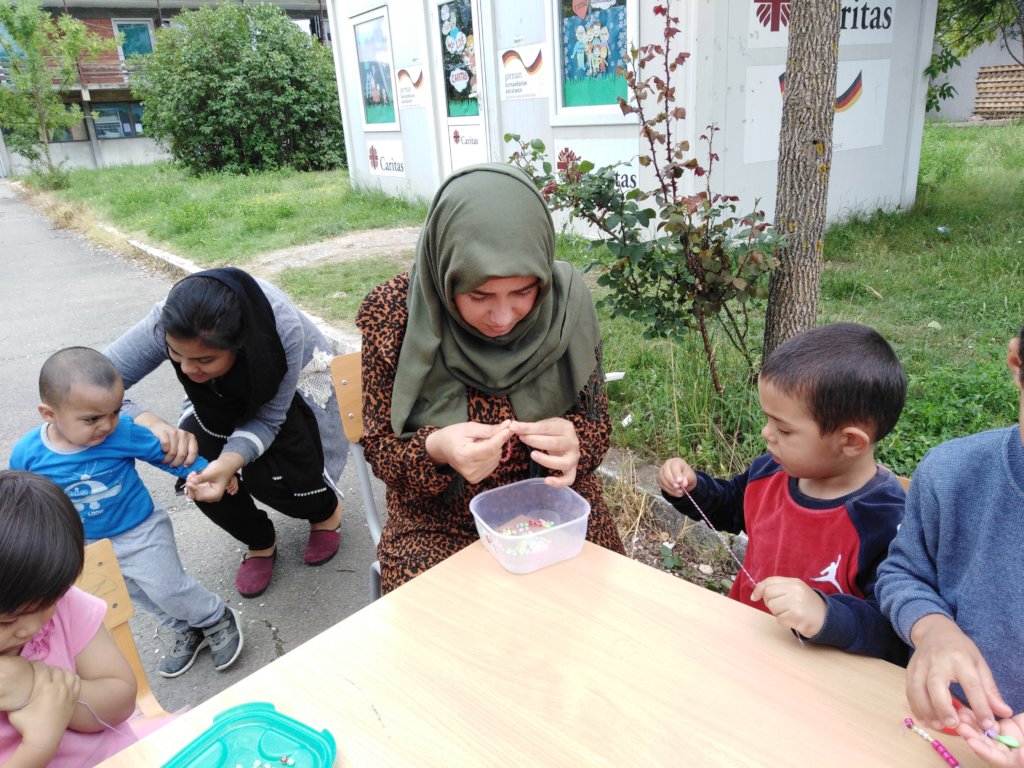 In late May, after weeks of isolation, measures concerning the spread of coronavirus were lifted and with them, those living in refugee camps were also able to socialize more, attend workshops, etc. During World Refugee Week, celebrated June 15-20, our psychosocial support coordinator organized a workshop to empower mothers and their children, and to promote bonding with others in the camp. The workshop, titled “Friendship bracelets”, was organized to celebrate refugees and everything they have achieved so far. You can see everyone’s excitement in pictures! One of the mothers said that it was “inspiring to be able to participate in group activities together with other mothers and children.” Participants were also excited as this was one of the first activities that they were able to join as a group. The number of activities dropped in the period during the state of emergency, with only a handful, mostly focusing on individual activities (such as drawing or reading), however recently, the number of activities has picked up, and thanks to good weather, we organized socially-distant group activities outside, such as playdates, group coloring, ball games or puppet theater.

Donating helps the children immensely, as we will then be able to continue offering support to children. In 2020, GlobalGiving wants your donation to go further so with the help of a generous donor, when setting up a recurring donation, the first one will be matched 100%. For as little as $15 a month, you will help one family with the necessary supplies that they terribly need.

If you are unable to donate, you can share our stories with friends and colleagues. If you would like to stay in touch, say hi to us on our Facebook or Instagram page, or on our website. We would love to hear from you! 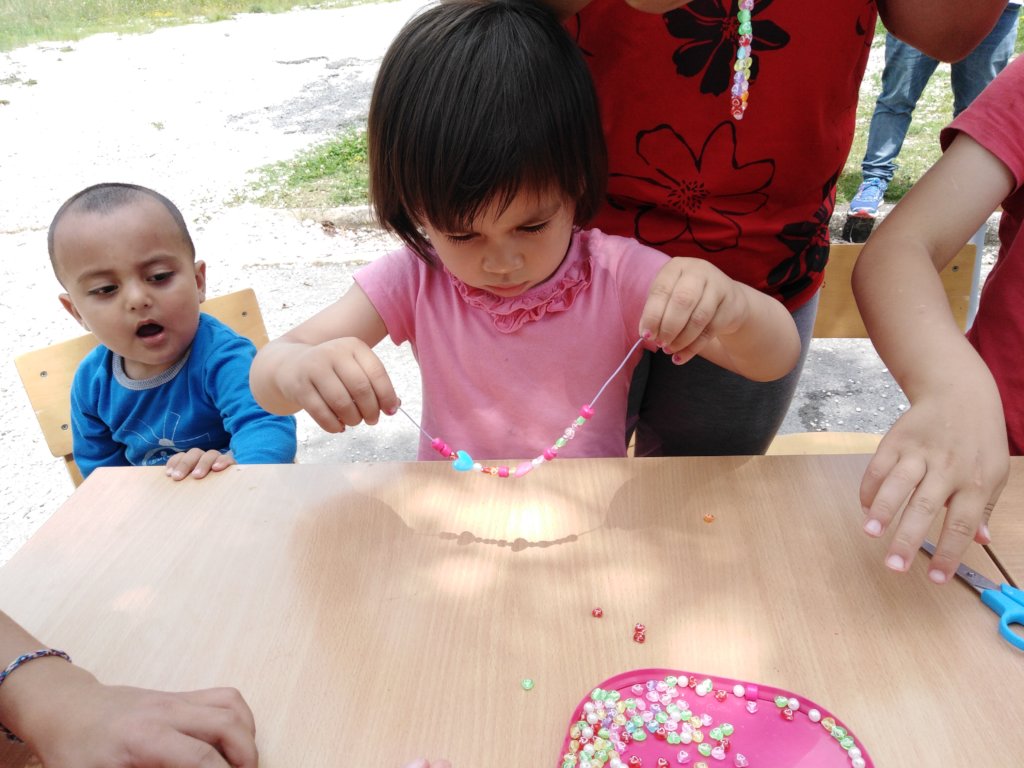 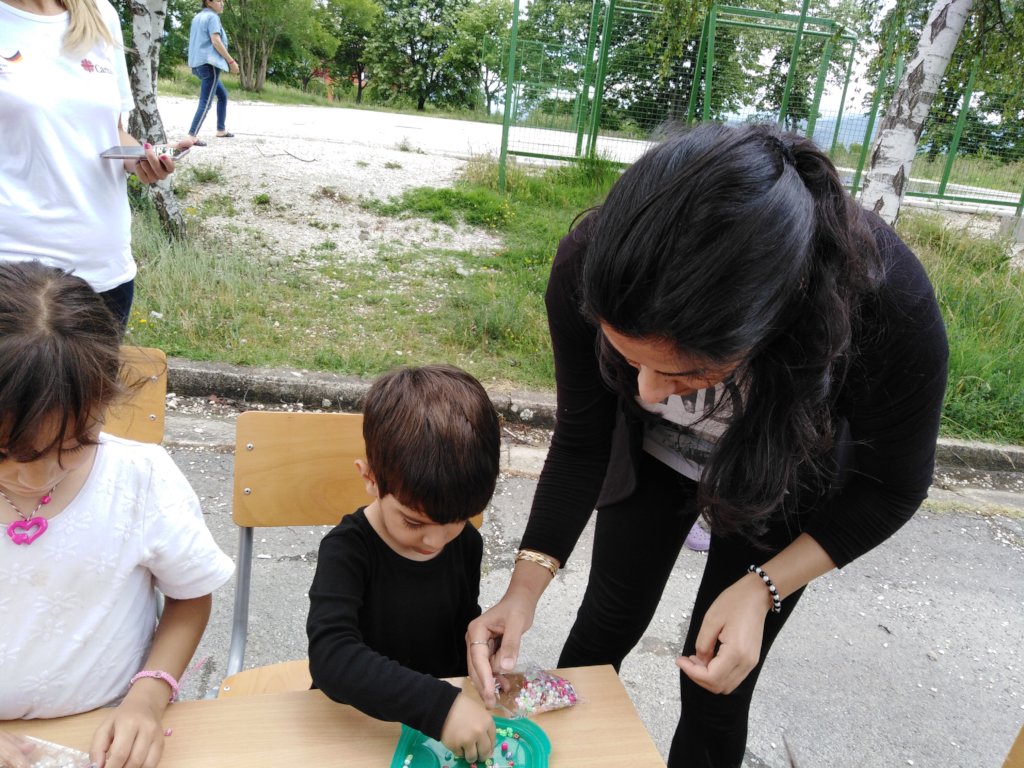 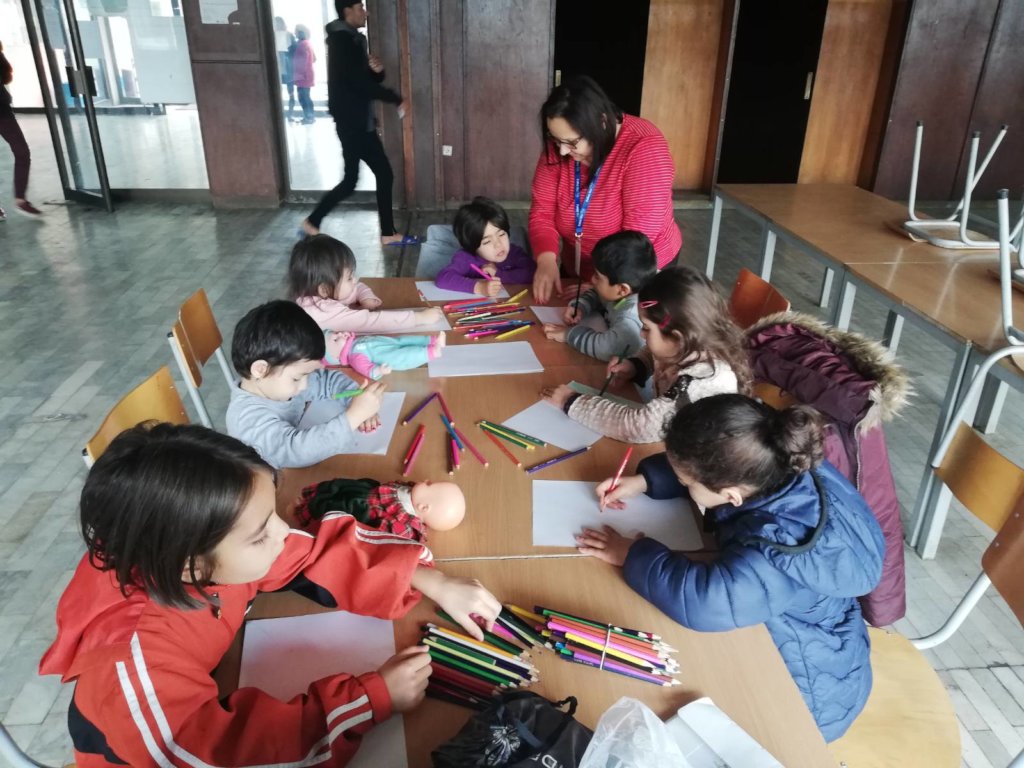 Over the past three months, at any given time of day, there were over a thousand people in camps in the south of Serbia, coming from Afghanistan, Bangladesh, Iraq or Palestine, amongst others.

Many of those arriving have young children with them in tow, who are shy, scared and terrified of their new reality, having been forced to escape from war stricken, famine or natural disaster stricken areas. And they need our help. On our part, we have been trying to help them through psychosocial workshops, small gifts such as toys or books and giving them opportunities to learn the language and mingle with local children.

After school programs are essential to bringing things back to normalcy for young children. Our coordinator that provides psychosocial help to children and families, says that mothers and children take any chance they get to play with others. As the temperatures are low, children are forced to stay indoors and entertain themselves with coloring books and observing the world around them, drawing what they see. These moments are also useful to teach children some basic Serbian phrases, allowing them to build language skills.

Disasters or conflicts leave severe psychosocial consequences. While the emotional wounds may be less visible than physical destruction of homes or material possessions, it often takes far longer to recover from emotional impact. Any sort of help that brings normalcy into the lives of children is essential for them in this period. Hanging out with peers, drawing and learning are all activities that help them cope and better understand their new reality, while preventing additional distress.

Please consider donating. It helps the children immensely and allows us to continue our programs. Majority of our donations come from the generosity of individuals who donate less than $50 a month. This Little x Little campaign (March 23-27) any individual donation up to 50 USD will be matched 50%. Not only that, your donation can go even further as every new recurring donation is matched 100%!

We want to be able to continue to offer psychosocial help to families in refugee camps. The only way to do so is through philanthropic generosity of our community. So please consider donating and helping us continue our programs.

If you are unable to donate, please consider sharing our story with your community of friends and acquaintances and starting a fundraiser. Don’t forget to get in touch with us on Facebook or Instagram, we would love to hear from you!

GlobalGiving
Guarantee
Donate https://www.globalgiving.org/dy/cart/view/gg.html?cmd=addItem&projid=21722&rf=microdata&frequency=ONCE&amount=25
Please Note
WARNING: Javascript is currently disabled or is not available in your browser. GlobalGiving makes extensive use of Javascript and will not function properly with Javascript disabled. Please enable Javascript and refresh this page.