Access to Justice for Women in the Kurdish Regions 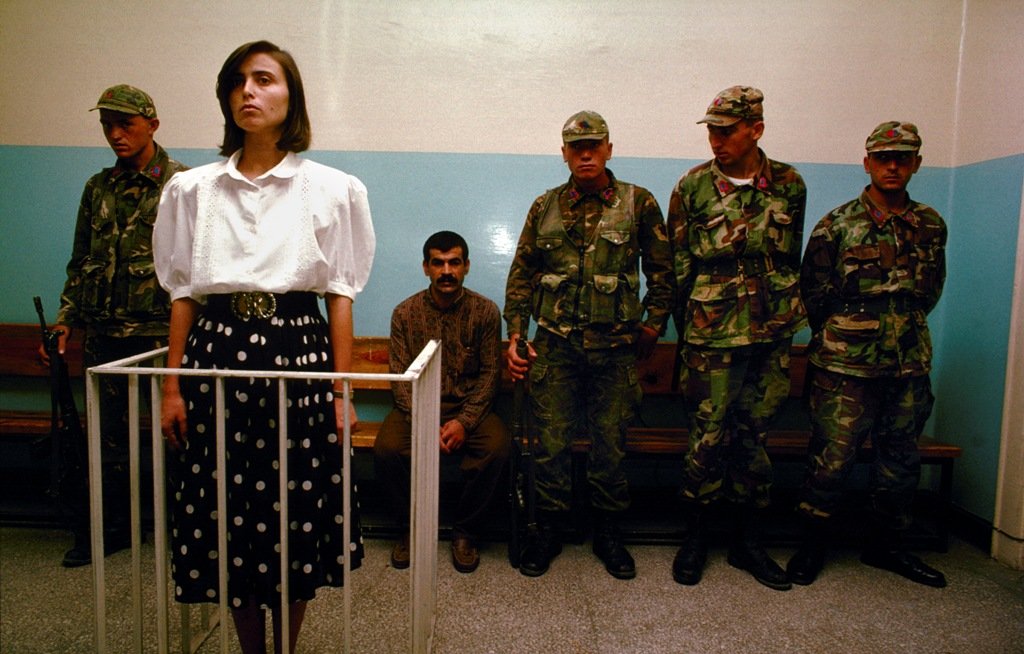 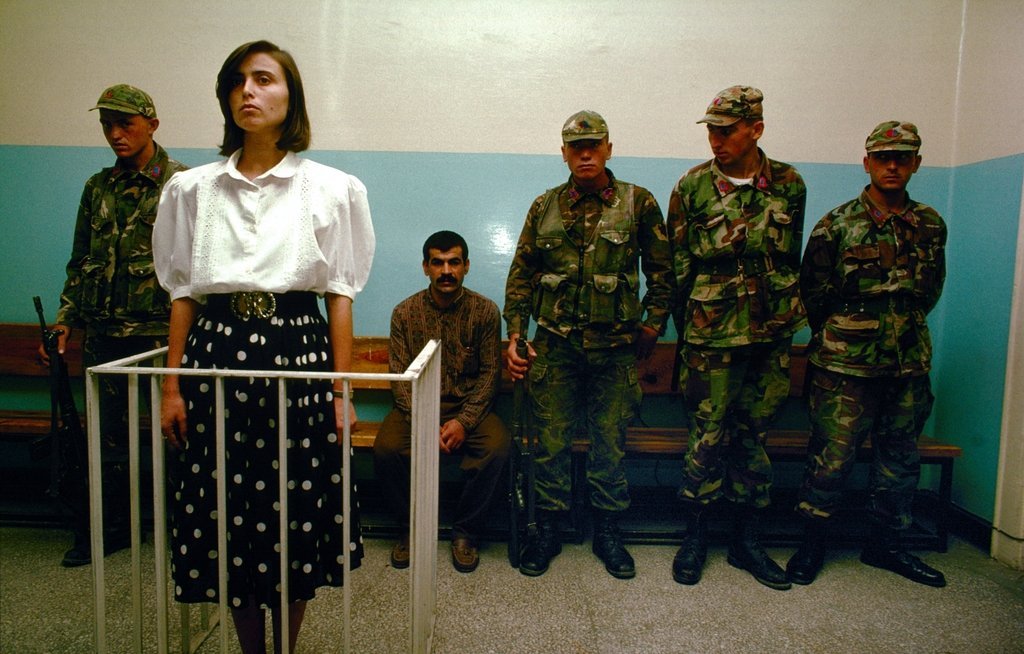 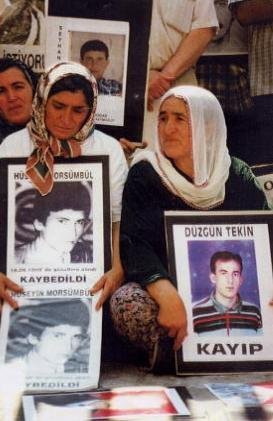 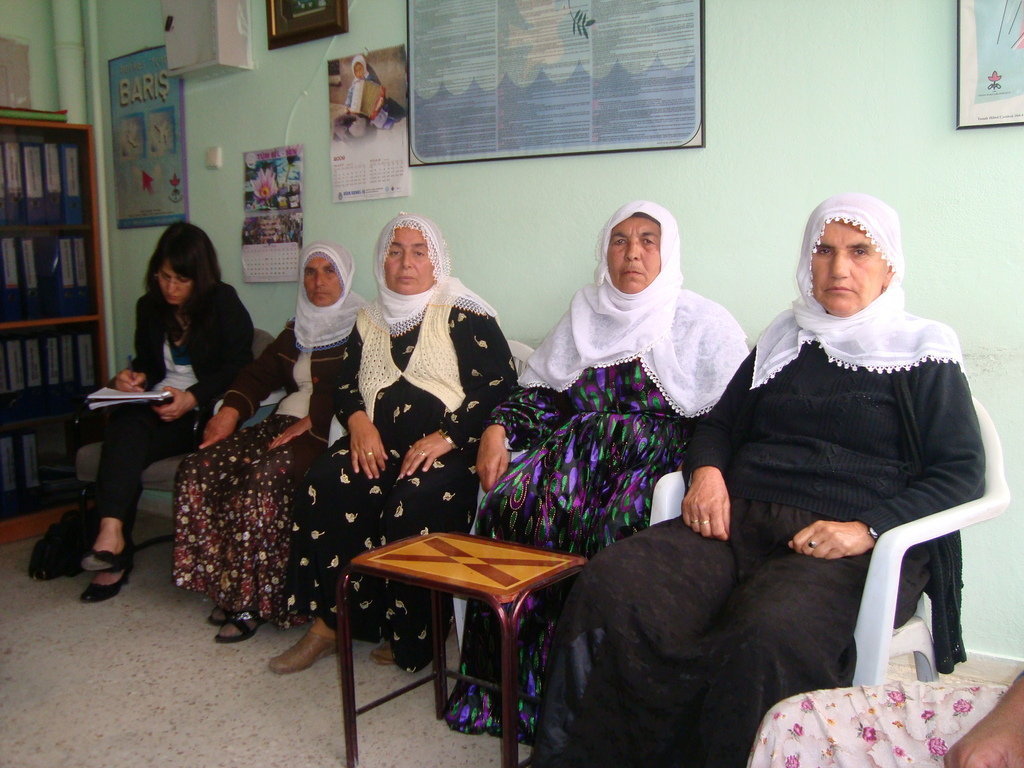 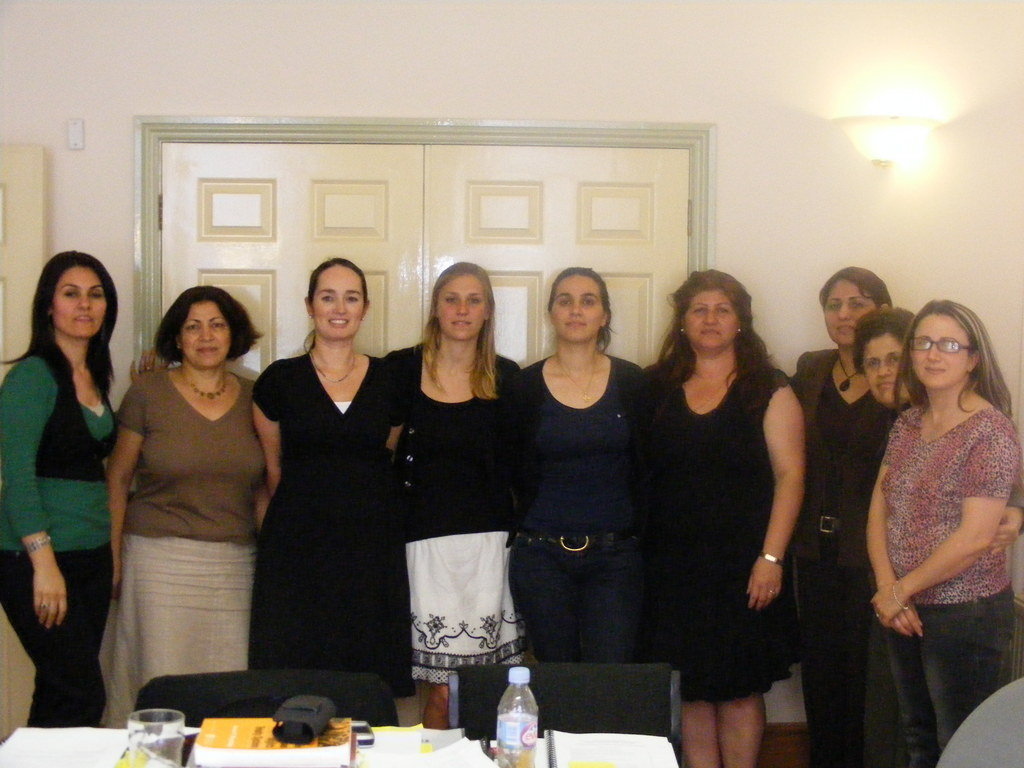 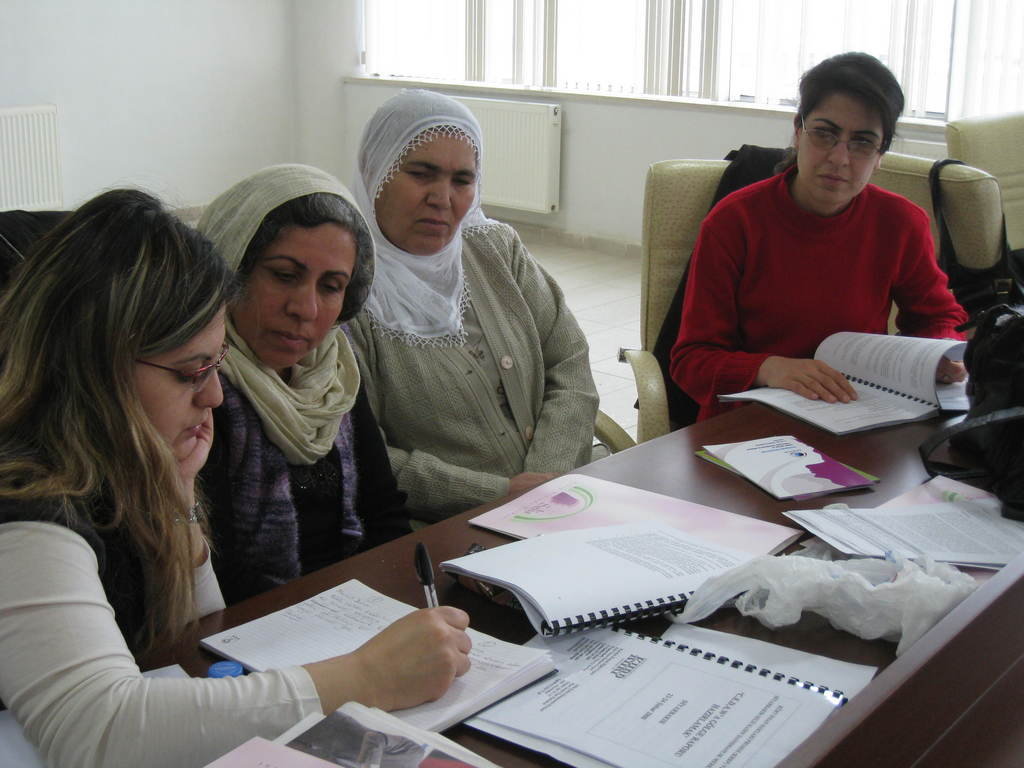 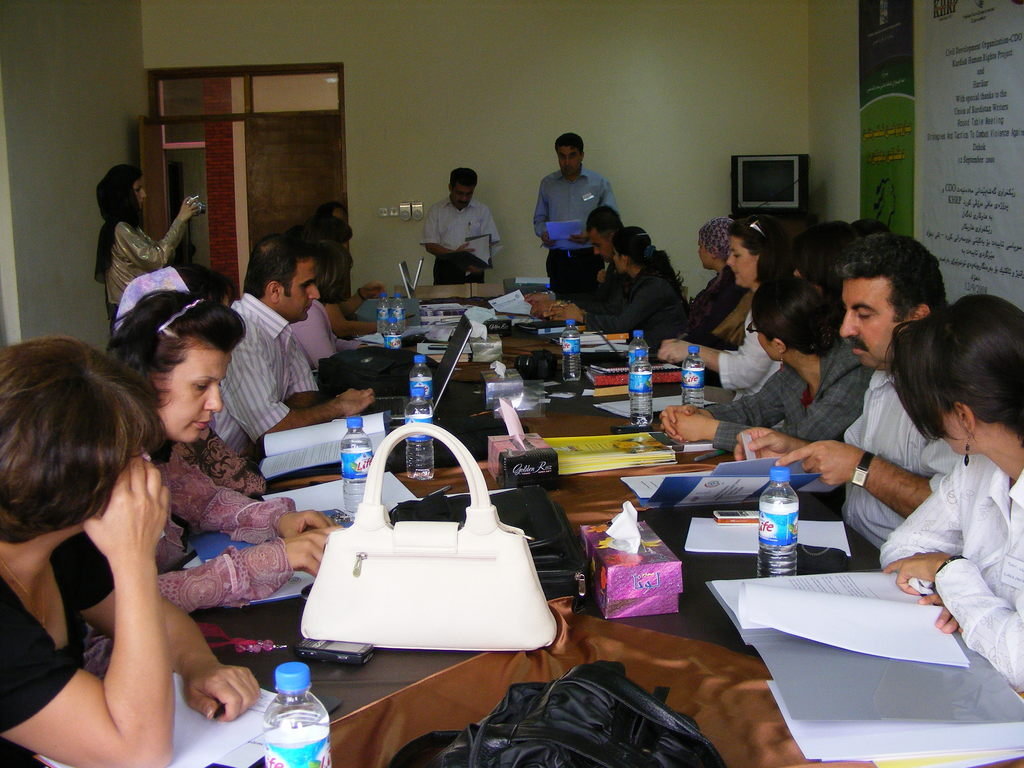 KHRP has recently carried out an in-depth assessment of our work and as a result the KHRP Board Members have made the decision to cease this project. Thanks to your very generous support it was a huge success. If you would like to find out more about the project please have a look at the KHRP archive site on www.khrp.org .

Since our last report, KHRP has been busy working with women and advocates throughout the Kurdish Regions to promote human rights and accessing justice. This work comes at a crucial time as the situation between Governments and Kurdish groups is under pressure in both Turkey and Syria.

Over the last few months Turkey has experienced familiar kidnappings, PKK and Turkish force retaliations, terrorist bombings, mass detentions of Turkish Kurds, and hostility between Turkish and Kurdish civilians in major cities. Similarly, the up-rising against the Government in Syria continues to escalate and has resulted in the death of around 3,000 people, the injury of over 20,000 people and the detention, abuse, torture and ill treatment of thousands more.

During these times of conflict and tension it is easy to lose focus of other existing human rights omissions, such as those that women in the Kurdish Regions face every day. Furthermore, as the condition worsens in these countries, the rights of women are threatened even more as they and their families are exposed to the results of conflict, such as persecution for their beliefs, ill treatment and torture and extrajudicial detention and imprisonment without access to lawyers and family. The sustained work of KHRP is important during this time to empower and protect the women of Turkey and Syria, as well as the rest of the Kurdish Regions.

Next month in Iraq, KHRP, in partnership with local partner CDO, will be facilitating a ‘Violence Against Women And State Obligations – Focus On Women In Conflict’ training for lawyers and advocates. The aim of this training is to build knowledge and a practical understanding of how to apply the basic standards and obligations set out in key international human rights instruments to prevent and address violence against women in conflict situations.

Back home, KHRP has continued to work with and provide advice to other organisations who seek a more in-depth knowledge of the conditions that women in the Kurdish Regions face. Finally, KHRP was awarded the prestigious Gruber Prize for Justice on 6 October 2011 at a ceremony in Philadelphia. KHRP was recognised for its use of a variety of legal instruments in protecting human rights and seeking redress for violations, including bringing cases on behalf of hundreds of applicants at the European Court of Human Rights and its on the ground field missions.

Through your support, you can help us continue to make a difference in the lives of women throughout the Kurdish Regions.

Donate to KHRP on 19 October and Global Giving will match your funds!!!

On 19 October 2011, GlobalGiving is having a Bonus Day and will be matching all donations made through their site with an extra 30%!!! This means for every $1 you donate to the Kurdish Human Rights Project we will receive $1.30. What better time to support the activities of KHRP as we provide access to justice and human rights for women in the Kurdish Regions!

Matched funding begins at 12.01am EDT and will be applied to donations up to $1,000 per donor / per project.

Spread the word and donate now to support women in the Kurdish Regions.

Over the course of the last 3 months, Access to Justice for Women in the Kurdish Regions has focused on highlighting barriers to justice for the women it serves. On 20 May 2011, the UN Committee on Economic, Social and Cultural Rights adopted concluding observations following its review of Turkey's initial report on the implementation of the rights enshrined in the International Covenant on Economic, Social and Cultural Rights. In advance of this review, KHRP had raised a number of concerns about Turkey’s compliance with its obligations under the Covenant by submitting a list of issues which are attached, and highlighted the significant barriers to education and employment that impeded women from enjoying their full economic rights. KHRP welcomed the expressed concerns and the below recommendations/ requests by the Committee: 'The Committee recalls article 3 of the Covenant as well as it general comment No. 16 on the equal rights of men and women to the enjoyment of all economic, social and cultural rights, and calls on the State party to: (a) raise public awareness about gender equality and adopt the necessary measures, legislative or otherwise, with a view to changing prejudices and perception about gender roles; (b) expand the supply of day-care services; (c) adopt the quota system in various areas to accelerate women’s representation in political life and in the labour market; (d) monitor, in collaboration with civil society organizations, the impacts of all measures taken on the enjoyment of economic, social and cultural rights of women by collecting specific data on the results of all its programmes and measures to promote gender equality. The Committee requests the State party to include in its next periodic report information on the impact of measures taken to enhance women’s representation in the formal economy and on the outcomes of the monitoring and evaluation of the Gender Equality Plan. The Committee requests the State party to include in its next periodic report information on the incidence of sexual harassment in the workplace as well as statistical data on cases of sexual harassment brought to the criminal and the labour courts, including information on indictments and sentences in this regard. ' KHRP also attended the Committee’s review of Turkey’s report which took place in Geneva on 3 and 4 May 2011 and met with Gabriela Guzman,a representative of the Special Rapporteur on Violence against Women, Its Causes and Consequences, who noted that we and our partners should feel encouraged to make more submissions about trends in violence against women in the Kurdish regions, as she felt that there was a dearth of reporting on this geographical area. KHRP discussed the type of information the Rapporteur would find useful and is currently working with its partners to prepare new submissions. In June, the Project participated in Panel discussion at the British Film Institute discussing the film Son of Babylon. This film touched on the specific difficulties women face in conflict areas. Because many of the women we work for lack formal education, they find it particularly difficult to engage with the formal sector when looking for family members from whom they've been separated over conflict and often find that because they may not speak the language of the state, their requests are ignored. There was an interesting discussion about the gendered barriers for poor women in Iraq, many of whom are unable to find their missing loved ones. Finally, the project has been in close contact with its partners in Syria as the situation there deteriorates. Women in Syria are both direct victims of state violence, ill treatment and torture, extrajudicial detention and imprisonment without access to lawyers and family, and also indirect victims of violence perpetrated against male family members. Women are unable to make contact with and even locate their husbands, sons, fathers and brothers, for fear of reprisal against the family and because the legal system treats their concerns as invalid. Unfortunately, as unrest continues to spread, the Project anticipates more harrowing stories to come. 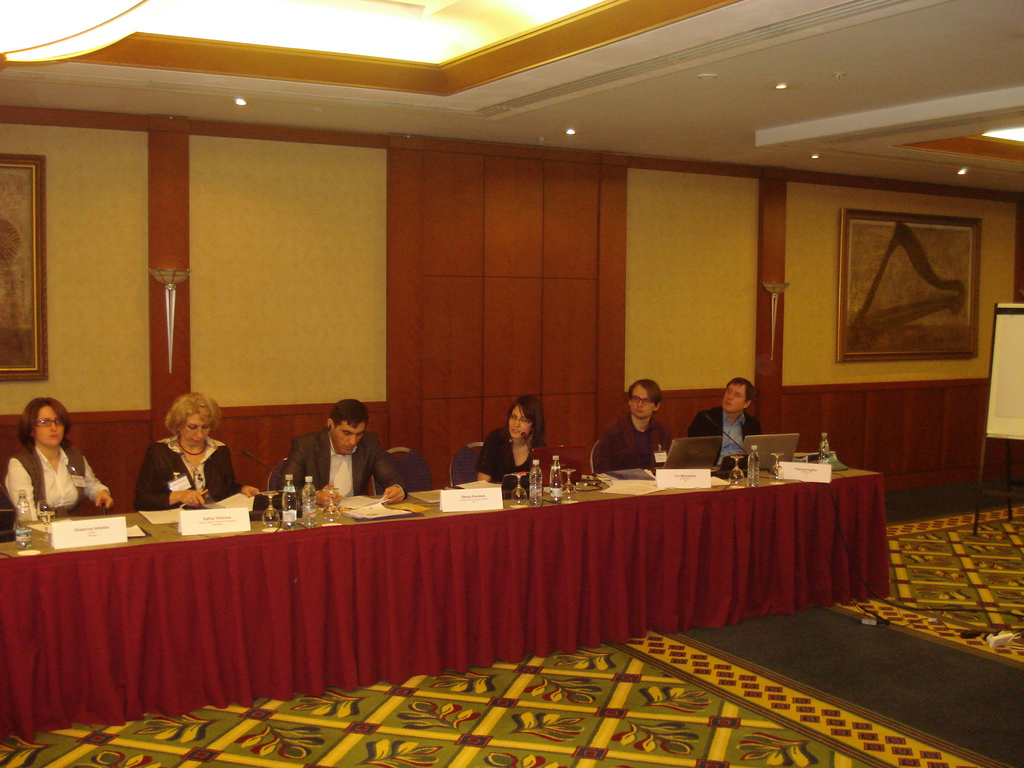 We would like to give a huge thank you to all of those who have supported the project and let you know that you are helping women in the Kurdish regions achieve justice and redress and to prevent future violations of their rights.

In March 2011, KHRP’s Legal Associate, Saniye Karakas gave a presentation to local lawyers in Tblisi, Georgia, on laws in Turkey relating to women’s human rights. The workshop focused on issues such as domestic violence, rape and trafficking and in particular on violence against women in Turkey, specifically looking at the domestic legal framework and its effectiveness in practice. The presentation provided a brief overview of the domestic laws relating to the topic, discuss the broader social context within which they lie, and evaluate the implementation of these laws.

Throughout the region, women are vulnerable to a wide range of human rights abuses such as violence and ill-treatment, forced labour, trafficking, and denial of access to justice.  Furthermore, where domestic legislation does not afford them appropriate protection or remedies, women can be denied access to legal redress both in theory and practice.

The project also marked International Women’s Day by raising awareness around the difficulties women have in accessing justice in the Kurdish regions. Whether they are in Turkey, Iraq, Iran or Syria, women face an uphill battle in their respective legal systems.  Laws, court’s interpretations of laws as well as administrative and social practices all contribute to women not being able to realize their basic human rights.

The project has closely followed the case in Turkey of a man who ran over his 17 year old pregnant wife and killed her because she had been raped by his brother.  KHRP was the only international observer at case which began in August 2009 and continues today. In this case, the state failed to uphold its commitment to human rights law concerned with gender based violence and discrimination. KHRP was disturbed to learn from its partner organisation the Van Women’s Association that at the most recent hearing on the 21 February 2011, a fight broke out between Pesen’s family and the accused, and the security in the courtroom battered the victim’s family. This horrific killing of Eylem Pesen again highlights the fact that much more needs to be done to improve the situation on women’s rights in the region and to insure the authorities upholds their stated aims of protection of women from violent abuse.

In addition, just over a week ago, a 13 year old girl’s abusers in Mardin were given reduced sentences for her rape because she was deemed willing.  The Court gave no consideration of her age and the fact that she deserved special protection as a child.  In the trial and it was reported that she was made to re-enact sexual positions in one of the hearings where she gave testimony.

Women across the Kurdish regions deserve much more from their governments and those charged with implementing the law.  The project urges governments in the region to ensure that women’s rights are considered integral to the advancement of human rights as a whole.  Equally, the international community has an obligation to support the networks of men and women working support these rights.

Find another project in Turkey or in Justice and Human Rights that needs your help.
Find a Project

GlobalGiving
Guarantee
Donate https://www.globalgiving.org/dy/cart/view/gg.html?cmd=addItem&projid=4010&rf=microdata&frequency=ONCE&amount=25
Please Note
WARNING: Javascript is currently disabled or is not available in your browser. GlobalGiving makes extensive use of Javascript and will not function properly with Javascript disabled. Please enable Javascript and refresh this page.