by Filters for Families 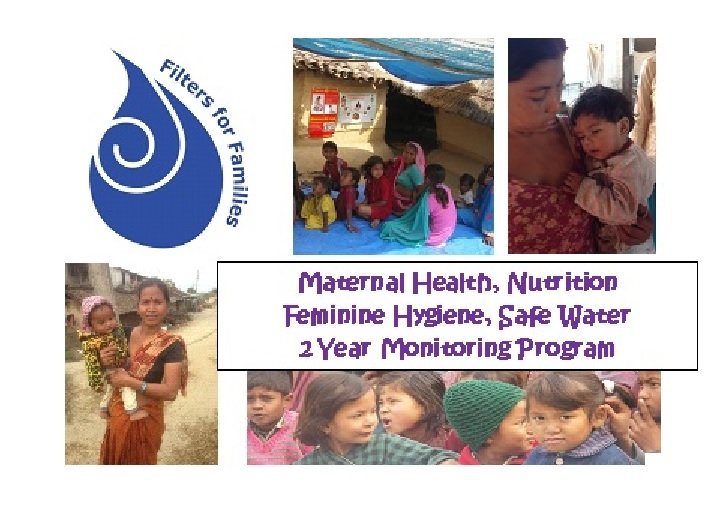 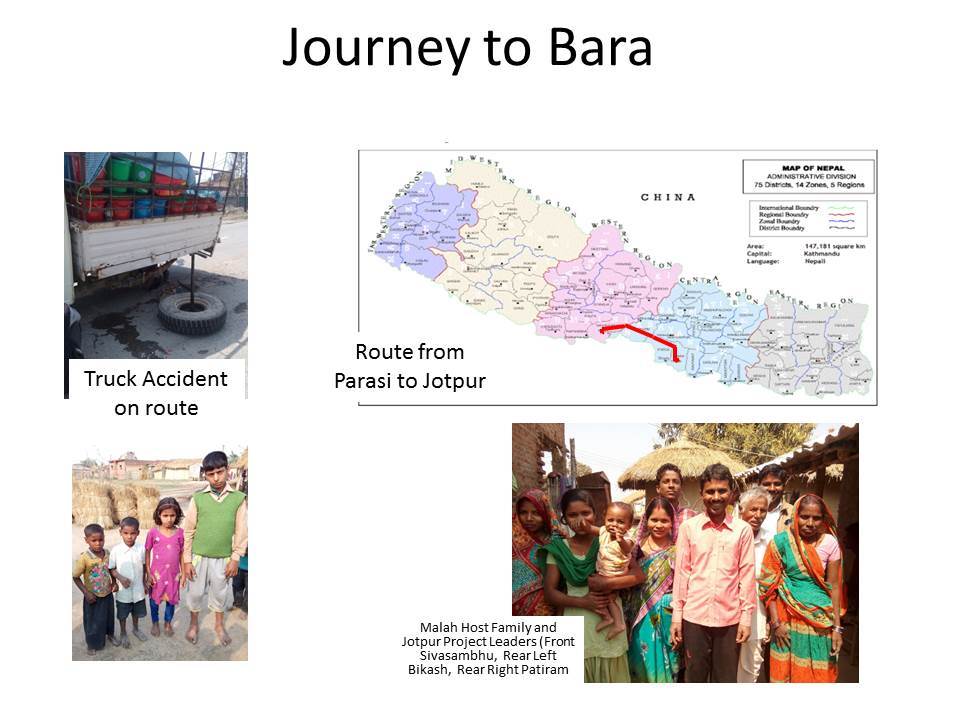 The original schedule for the Bara project was altered several times. The perfect plan was to blend the  Bara Nutrition and Health trainings with the Nawalparasi Team in the Parasi Office. After several failed attempts bring the Bara Team to Parasi, including delays from a  nation-wide strike, we decided to head to Bara and conduct workshops through a translator.  We set off for Bara on a clear Friday morning,  46 Sono-mini filters stacked on wood pallets in the truck, two 30 liter hollow fiber filters, a large suitcase of baby cloths and blankets, three FFF staff and two drivers. We made great time reaching Naranghat, Chitwan in < 3 hours. After a short lunch break we headed to Hetauda  where we would turn south to Jotpur, planning to arrive around 2:30 pm and hold the first workshop with the community at 4 pm. As most of our plans for Bara, this day held a surprised delay, a truck accident. Not far from Chitwan the driver of our rented Mahendra Bolero truck swerved to miss a motorbike, this abrupt sharp turn broke the rear wheel axial shaft, the tire flew away and the truck skidded on the cylinder while it carved a deep scar in the road as the driver struggled to controlled the vehicle.  Thankfully, no one was injured and a couple buckets were cracked but could be fixed.  A local mystery (mechanic) was fetched by the driver, he studied the wheel,  the broken shaft and other pieces, soon the driver and mystery headed off for parts. Almost 3 hours later both reappeared with new parts, sledge hammers, chains,  jacks and assorted tools.  Another 3 hours later after endless hammering, bangs and clangs we climbed aboard and set off for Bara, hoping to arrive by 10 pm.  Constant phone calls between Ramesh our Office Coordinator in Parasi and our contact in Jotpur, Sivasumba kept everyone informed of the delay. The information workshop was rescheduled for Saturday.  As we pulled up to the main intersection toward Jotpur the truck left the paved road and traveled over back hummocky paths of fine sand. Thankfully,  we were guided to the village by two policemen, one with a rife slung over his shoulder and a second  motorbike with our two Jotpur Team Leaders, Patiram and Sivasambhu. Our host family kept dinner warm as we pulled up to their warm home at midnight.

The next morning we began water testing, I made a Social Map of the . This map would help track the high arsenic areas and help determine what if any correlations among well depth (aquifer), arsenic concentration, and health. Midway through mapping, Sivasambhu, his son and two other young men took over drawing the social map- they added detailed roads, paths, homes, shrines, Mosques, and shops. Their detail work was extremely useful in identifying arsenic “hot zones”.  Sumai and Dhanysdari (FFF staff) set up a temporary water testing lab on the  Mahen’s porch. By dinner 54 water analyses were completed by using six test flaxes Hach the Hach test kits. Two local men trained alongside the FFF team to learn FFF’s methods for collecting water, data and testing.  I met with one of my translators in the morning, a lovely young female finance student. We packed the gift bags and discussed the workshop.  Later that afternoon along with our host, his brother (Patiram) and son (Bikash),  we met in the Primary School with the local men to discuss the programs, the importance of good nutrition for infants and mothers, and held an Arsenic Awareness Workshop.  We planned to meet again after the water testing and map was complete.

The Infant and Mother Workshops were planned for the afternoon of the second day. Little did we know the workshop would be overrun with young women, children, and grandmothers.  We planned for a total of 40 households with infants, but over 90 women pushed through the school door. The children playing outside were so noisy no one could hear, to reduce the number of women in the room we separated the older women from the younger ones unless they were caring for a young child. This ensured the young women received the gift bags. After the workshop, we asked those who received bags to leave and then gave food from the nutrition workshop to those who didn’t receive a gift bag. Three young men volunteered to  help register the families and organize  the energetic children.  Later that evening as we discussed the situation with the host family, we discovered that that no programs for women and children were ever held in the village, so women are extremely interested to learn more about good health, safe water and nutrition for their children. I learned several lessons: First- run side- by-side programs for children and older women in separate school rooms; Second-set up registration lines for all three workshops outside the school room; Third-assume every household will have more than one woman interested in the workshop; Fourth-young married women usually stay in the home 1-2 years before permitted to socialize.

By evening of the second day the water testing team finished 96 water tests. Their dedicated effort allowed us to map the high arsenic areas and identify households with arsenic within two days.  The test showed that wells with a range from 35 ft to 105 ft depth contained arsenic, in contrast to the deeper wells over 130ft, which were arsenic free.

The third day, Sivasambhu and I  walked through the southern part of the village and invited 10 households with pregnant women (or a representative) and young children to the school to receive baby cloths, baby blankets, shoes, and toddler cloths. All the cloths were donated by friends in Denver. In the process of  visiting homes we found eight households with disabled children. The cause for these disabilities wasn’t known, in case water was the problem, their names were added to the filter distribution list. Later that afternoon, the second information meeting was held with the village men. The arsenic testing identified three high arsenic clusters. The group decided to drill three deep wells, one in each arsenic cluster. Each deep well will provide safe water for seven to eight families. The community also agreed to provide food for the drillers and three men to monitor the wells.  Funding for the deep wells is part of a FFF program running in tandem with the Global Giving Infant and Mother Health project in Jotpur.   As dusk approached we started the Sono-mini Filter distribution which continued into the next day.  Sumai and Dhyandhari, the FFF tech team, provided individual filter maintenance instructions to each user as they picked up their filter.

Early the next morning the tech team left for Parasi. I stayed on to check a few  filters that were distributed a year ago.  Our hostess is a teacher at the school, she asked if I could check the school filters distributed last year, so we walked the rutted dusty path to meet the Principle. Before fixing the filter a teacher showed me around to four class rooms, two rooms in good condition and two rooms were part storage for  broken desks and classroom. The children sat on burlap bags leaning over to complete their workbooks. Another lesson learned that day, we assumed that the people distributing the filters last year gave instructions on how to maintain the filters to the teachers.  This instruction seemed to be missing,  however, now all the teachers are equipped to take care of the two working filters.  Lots of children accompanied us back to the house, they were laughing and  teasing us.  When we returned I found that the wells wouldn’t be drilled for several days, so I decided to head back to Kathmandu via the night bus. Waiting for the electric rickshaw, I sat around with several women and children.  The host’s grandmother said “you’ve only been here five days and you’ve brought so much love to our village”.  After all the difficulty just trying to get to Bara, our journey was rewarded with such kind words and gratitudek. My heart was truly touched with joy.

We plan to have four members of Bara attend a Nutrition/Health Training in Parasi after the Nepal National elections, hopefully, before monsoon season begins.  These Team members will be responsible for the follow up program that measures the children’s physical stats and development issues over the next 2 years.  A huge note of gratitude go out to Ramesh and Sivasambhu, Patiram, and the volunteers who made the project successful.

Thank you for your generous donations that blessed many villagers in Jotpur. 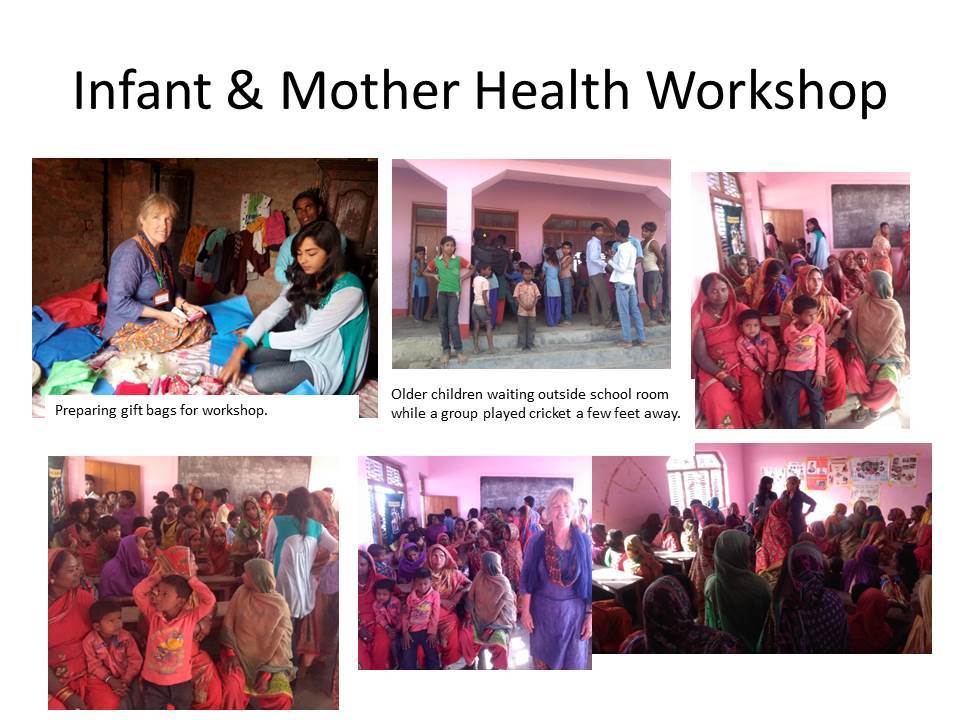 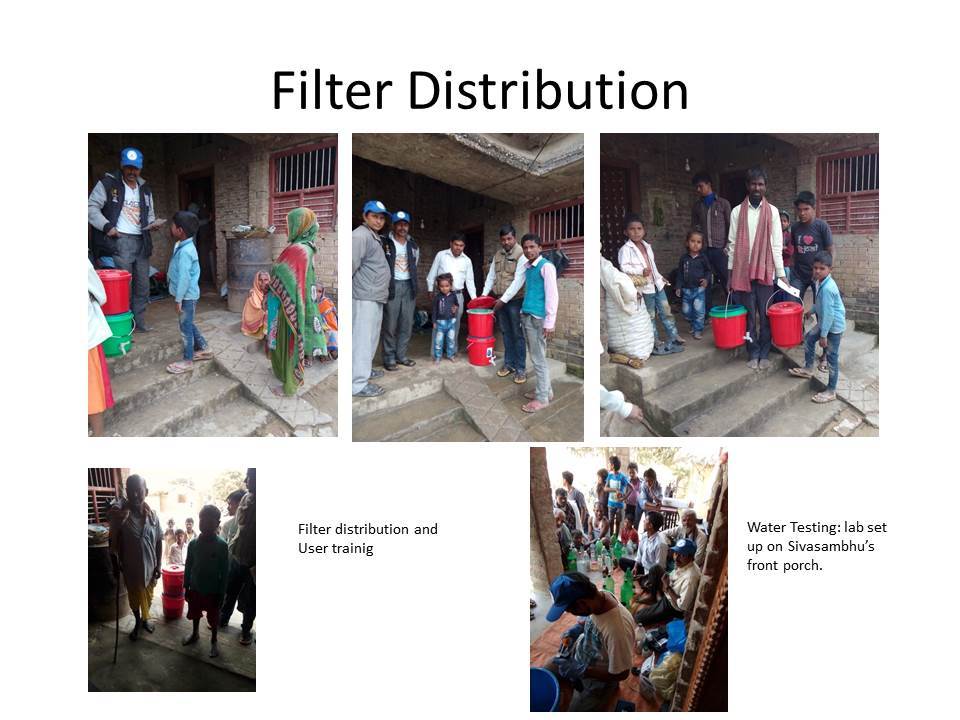 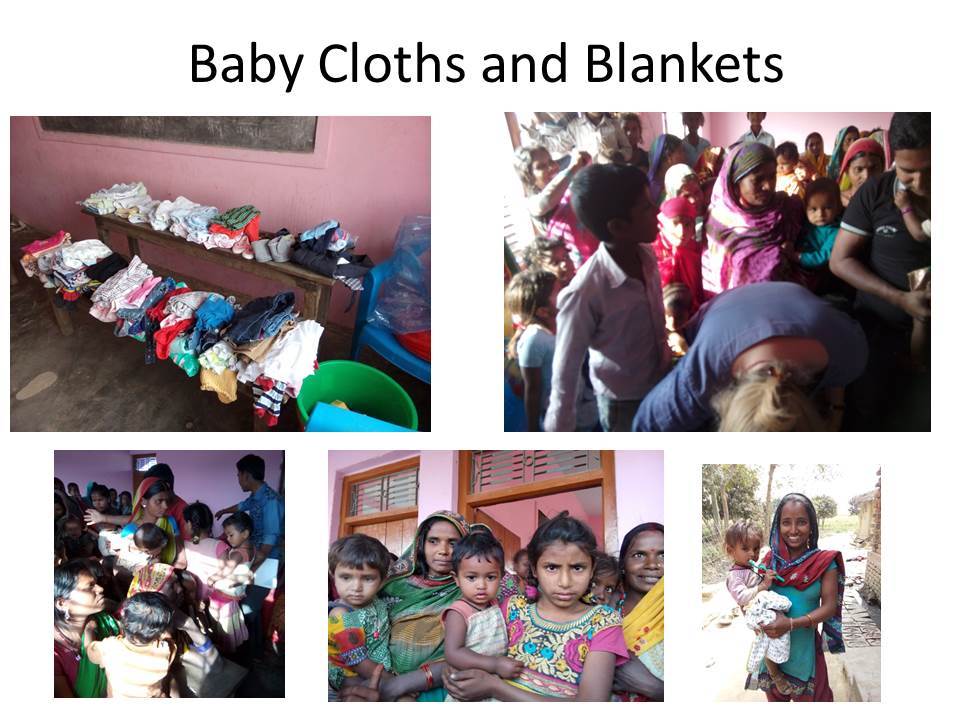 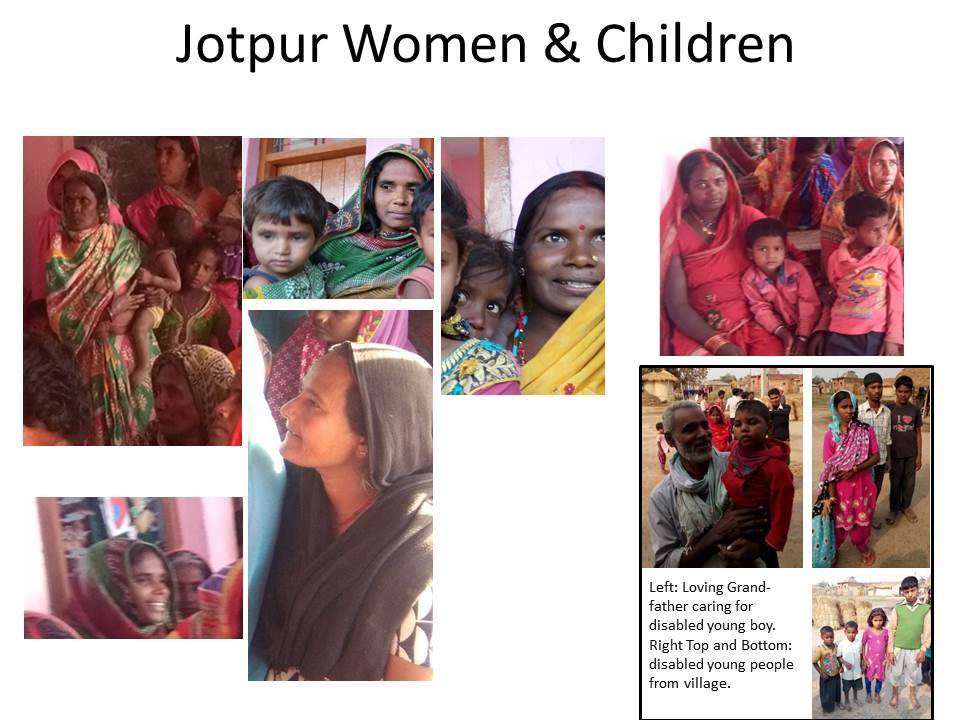 Find another project in Nepal or in Health that needs your help.
Find a Project

GlobalGiving
Guarantee
Donate https://www.globalgiving.org/dy/cart/view/gg.html?cmd=addItem&projid=25886&rf=microdata&frequency=ONCE&amount=25
Please Note
WARNING: Javascript is currently disabled or is not available in your browser. GlobalGiving makes extensive use of Javascript and will not function properly with Javascript disabled. Please enable Javascript and refresh this page.