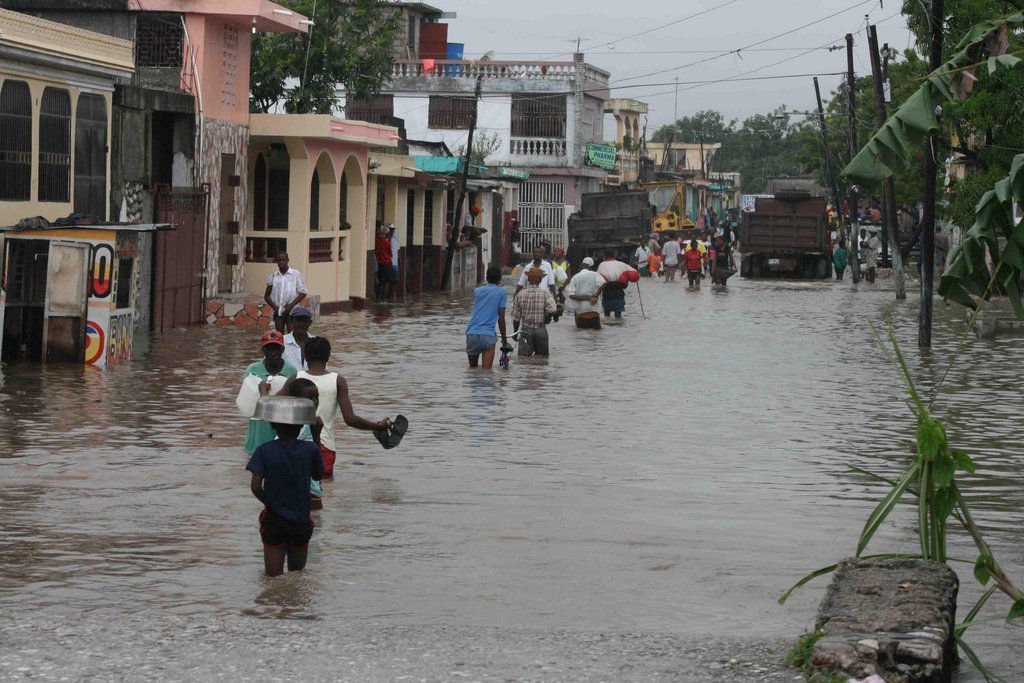 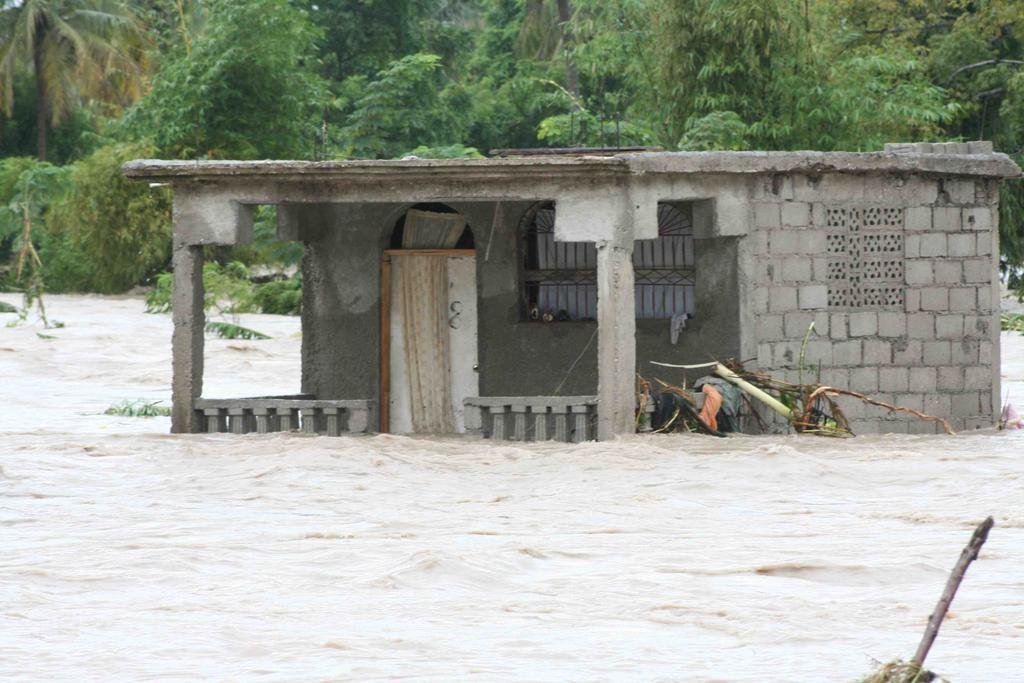 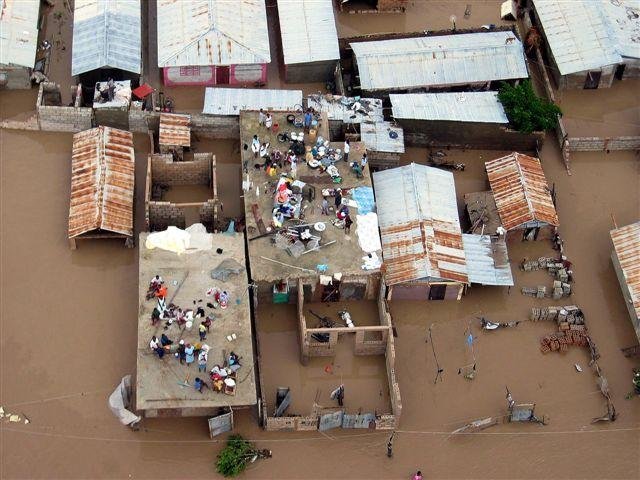 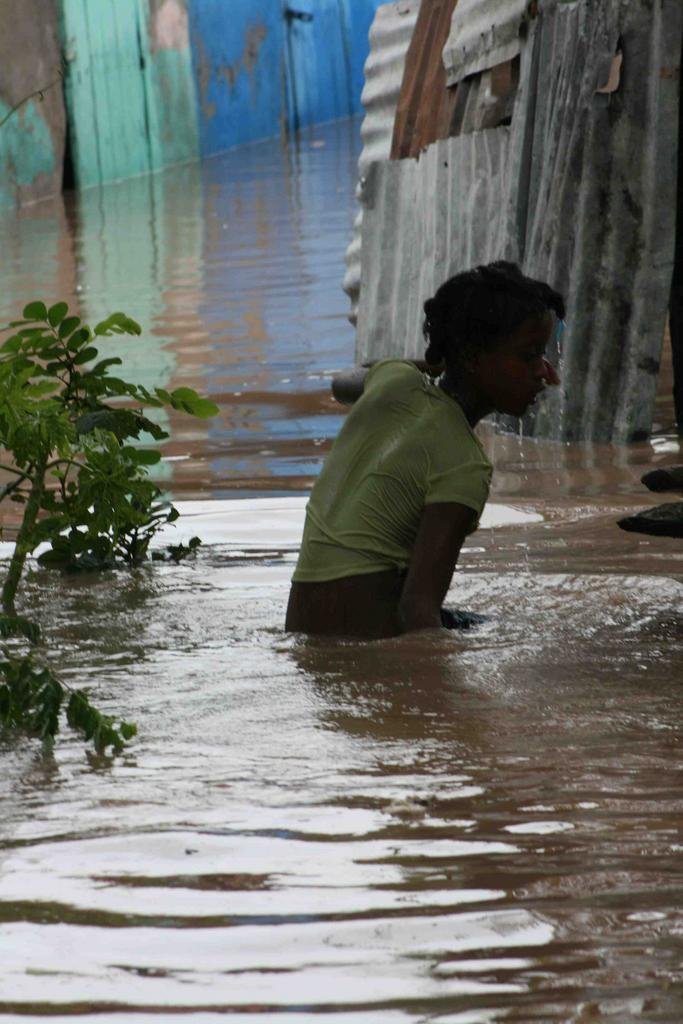 In the aftermath of Hurricane Gustav, less than a week ago, devastation has struck Haiti. There are many victims who have been left homeless. The city of Gonaives is now under 2 meters of water. Since Monday morning strong rain has pounded mountain villages throughout Haiti and the waters gushing from the mountains are carrying mud and anything in their paths to flood the valley city of Gonaives. Tidjo (Lambi Fund of Haiti regional coordinator for Northern Haiti) and Margot (Lambi Fund advisory board member) called at 3 am to inform us that Tidjo's home was flooded. Margot was traveling and had to seek refuge at Tidjo's home. Due to the sturdiness of Tidjo's home, over 20 neighbors had sought shelter on the roof top. Many others have sought refuge on their roof tops, Gonaive's hospitals are flooded and are asking for help in moving and securing their patients. The city does not have the capacity to handle this emergency and the mayor has sought assistance. St Cyr (Lambi Fund regional coordinator for Southern Haiti) came to Port-au-Prince for a staff meeting, just called home and was informed that his neighborhood in the South is completely flooded and the rushing waters have carried away many of their household items. His family has had to seek shelter on their rooftop. Hurricane Hanna came too closely on the heels of Gustav and stalled over Haiti, causing hundreds of deaths, loss of crops, homes, micro-enterprises and animals due to heavy rainfalls. Although food aid is a temporary solution, ultimately, Haiti desperately requires investments in sustainable development in an effort to restore environmental integrity and reduce poverty. A close neighbor to the U.S., Haiti desperately needs support in rebuilding the communities ravaged by the recent storms, but also needs support in becoming self-sufficient. Natural disasters cannot be avoided, but the severe devastation caused by it can surely be mitigated.

Yesterday, Port au Prince was in a state of panic. It was extremely windy and raining hard. Many houses no longer have roofs, trees are uprooted, light poles with electric lines are down… but this is nothing compared to the devastation which has struck other communities throughout the country.

The Minister of Education postponed the opening of classes until next week, but in light of the unanticipated problems brought by Hanna, we don’t know if they will not have to postpone it yet again (we have heard that there are two other hurricanes on their way)

No one is talking about schools right now; the focus is on the damage wrought by Gustav, Hanna and Ike. We are all thinking about how to begin tackling the problems which have suddenly disrupted our lives.

We are receiving calls from our partner organizations with horrible news about their communities.

The peasant organization in River Blanche (ODEPERIB) called to say that one member of the organization has died, the flooding is really severe, and many houses are destroyed. Some of the cisterns we have funded have sustained a lot of damage.

The Women’s Association of Mapou Rollin, just called and Vyolèn, the president of the organization, said that Hanna is even worse than Jeanne. Her house is completely destroyed and she has lost everything. The grain mill we helped build is completely flooded and the corn and millet brought by the market women to be milled just washed away. The chicken coop which we also helped build is being used as shelter by over 100 local families. No one has eaten anything since Monday.

Mme. Cedieu, a leader in the farmers’ organization of Gwomon (AGPGM), said that she lost everything -- her crops and her animals. She said that the land cultivated by AGPGM was devastated and all the plantain trees are down. Fortunately our experimental field of young plantain trees is still standing, as is our Center for Plantain Propagation. Not too many trees were destroyed but the irrigation pump will need to be repaired.

Tidjo (Lambi Fund Field Monitor for the North) and Margo (Lambi Fund Advisory Board member) called us this morning and told us that the waters are beginning to recede in Gonaives, and at Tidjo’s house as well. Tidjo has lost everything and there are now over 60 people seeking shelter on Tidjo’s rooftop. They have not had anything to eat in 3 days.

Once it stops raining we will try to go to Gonaives to bring some help to Tidjo and his family and to see in what way we can begin to help our partner organizations and their communities. Reaching Gonaives will be very hard, since a veritable lake now lies at the entrance of the city and all roads and bridges are wiped out.

Meanwhile, St Cyr (Lambi Fund Field Monitor for the South) has finally gotten news from home. He came to Port-au-Prince from Les Cayes to attend a staff meeting when he got news that his home and neighborhood were flooded. He was extremely distressed to hear that his family and their neighbors had to seek refuge on their roof top. He was told this morning the waters had receded. He too has lost everything. Although St Cyr has learned that there is no way to get to Les Cayes, because Miragoane has overflowed, he is now determined to get back to his family, and he will call us when he gets there.

We just received a call from ADZK, a large pig breeding project. They lost some pigs ... and the greenhouse lost some tree seedlings.

The calls are trickling in we will keep you posted whenever we hear something.

Thanks to 112 donors like you, a total of $15,001 was raised for this project on GlobalGiving. Combined with other sources of funding, this project raised enough money to fund the outlined activities and is no longer accepting donations.
You last donated to this project on 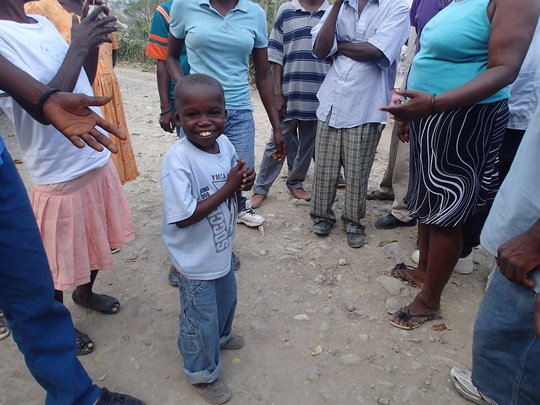 Contribute to Long-Term Rebuilding in Haiti
Find a Project

GlobalGiving
Guarantee
Donate https://www.globalgiving.org/dy/cart/view/gg.html?cmd=addItem&projid=2261&rf=microdata&frequency=ONCE&amount=25
Please Note
WARNING: Javascript is currently disabled or is not available in your browser. GlobalGiving makes extensive use of Javascript and will not function properly with Javascript disabled. Please enable Javascript and refresh this page.