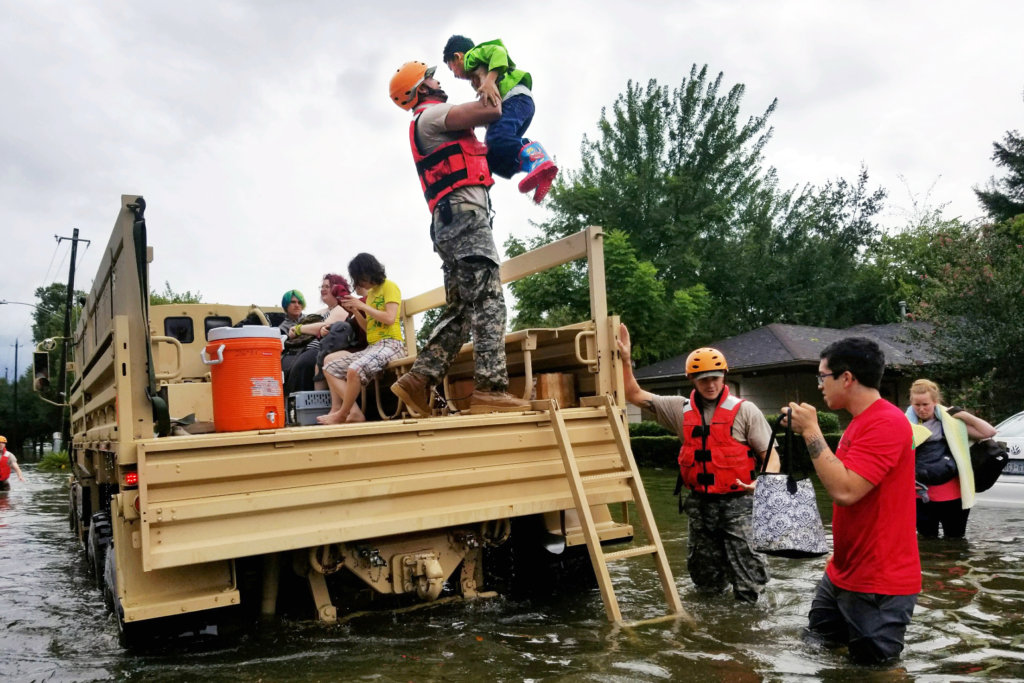 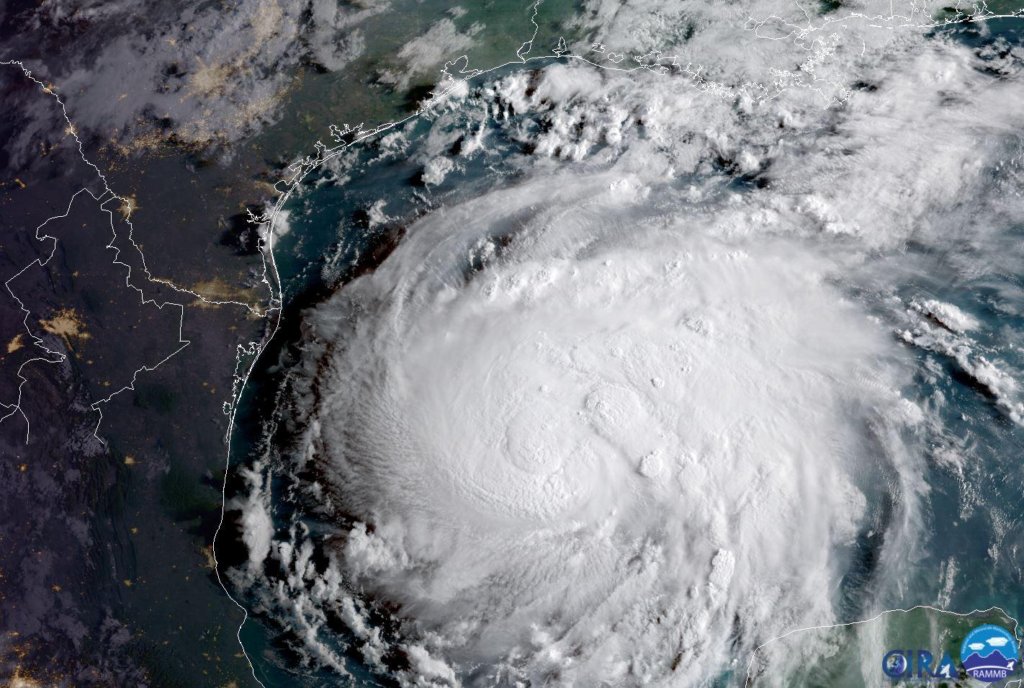 What I saw in Houston 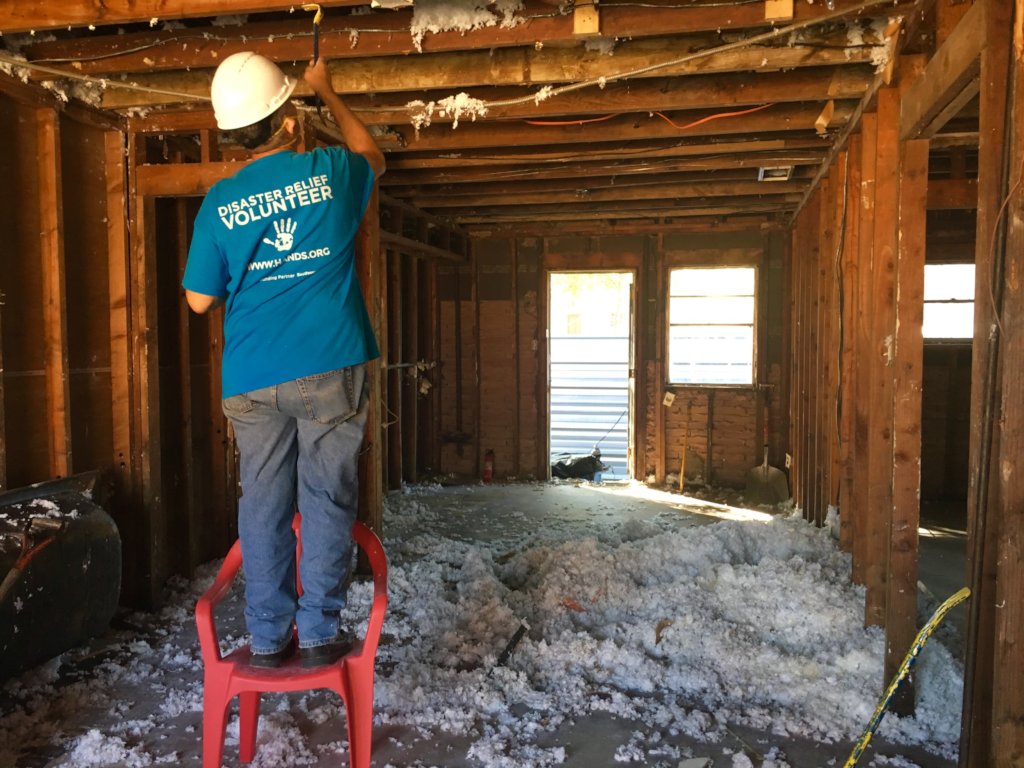 Photo from All Hands Volunteers

“Everything I had was obliterated,” he said from one of the last mass shelters for hurricane evacuees in Houston—a shuttered department store inside a mall. “How much more could a person lose in a single year?”

I met Jermaine last month when I visited Houston. He is one of the thousands of people struggling to rebuild their lives in Houston and the surrounding area after Hurricane Harvey.

Two months after the powerful storm made landfall, the need for basic assistance is still high, especially among Houston’s most vulnerable residents. About 85% of the storm’s victims don’t have flood insurance and hundreds of thousands have been denied FEMA assistance, or are still waiting to receive it.

Thanks to you, they have somewhere to turn.

With your donation, our local nonprofit partners are addressing gaps in services and providing a vital safety net for hurricane survivors in Houston. Because of your donation, they had the resources they needed to respond to urgent and emerging needs on the ground. These heroic first responders have been working around the clock to coordinate emergency relief operations and develop long-term recovery plans, all while juggling their pre-Harvey duties.

Here’s a look at what your donation has made possible:

Hundreds of people whose homes were destroyed by Harvey have a place to live thanks to a rapid re-housing partnership between the Coalition for the Homeless of Houston/Harris County and Houston landlords. The partnership provides six-month rental coupons for apartment units around the city. The coalition has also furnished more than 300 homes and stocked more than 400 pantries for hurricane survivors thanks to GlobalGiving donors like you.

Since Harvey hit, the Houston Food Bank has been operating at three times its normal capacity. Leveraging an extensive network of partners, including companies and regional hunger relief organizations, the bank set up mini-distribution sites and food delivery services in Harvey-hit neighborhoods. It also extended its hours to accommodate storm-displaced families.

“We go where we’re asked to go, and do what we’re asked to do.” That’s how Tommy Holstien describes BakerRipley, a Houston-based nonprofit that’s been around for more than 100 years. In the difficult days and hours that followed Harvey, the nonprofit set up an emergency shelter that housed more than 7,500 people over 26 days. BakerRipley is still managing a food and supply warehouse for Hurricane Harvey survivors. It’s filled with diapers, sanitary napkins, cleaning supplies, canned food, pet food, and more unused, high-demand items. BakerRipley staff told me they’re now focusing on long-term case management for storm survivors. Approximately 20,000 people are on a waitlist to receive storm-related assistance through BakerRipley.

Harvey unleashed 33 trillion gallons of water on U.S. soil, much of it dumped right over northeast Houston. For weeks, Minden Square apartments in Houston were covered in stagnant, dirty rainwater. The walls of the apartments are now stained with ugly, brown water lines—about knee-high, they’re a reminder of Harvey’s power. All Hands Volunteers are gutting the units, now infested with poisonous mold, at no cost for survivors. This is one of more than 160 home renovation projects that All Hands Volunteers have tackled in Houston since Harvey hit in August, and they have committed to helping Harvey-impacted residents in Houston rebuild over the next two years.

Because of your gift, Houstonians had a warm and safe place to sleep after the storm. Because of your gift, hundreds of families now have an apartment to call their own. They have food in their pantries and hope for the future. Recovering from Harvey will take years, and our partners are so grateful for your support.

P.S. To help meet acute needs in Texas, GlobalGiving will match your donation to organizations responding to Hurricane Harvey up to $1,000 at 100% while funds last on #GivingTuesday. 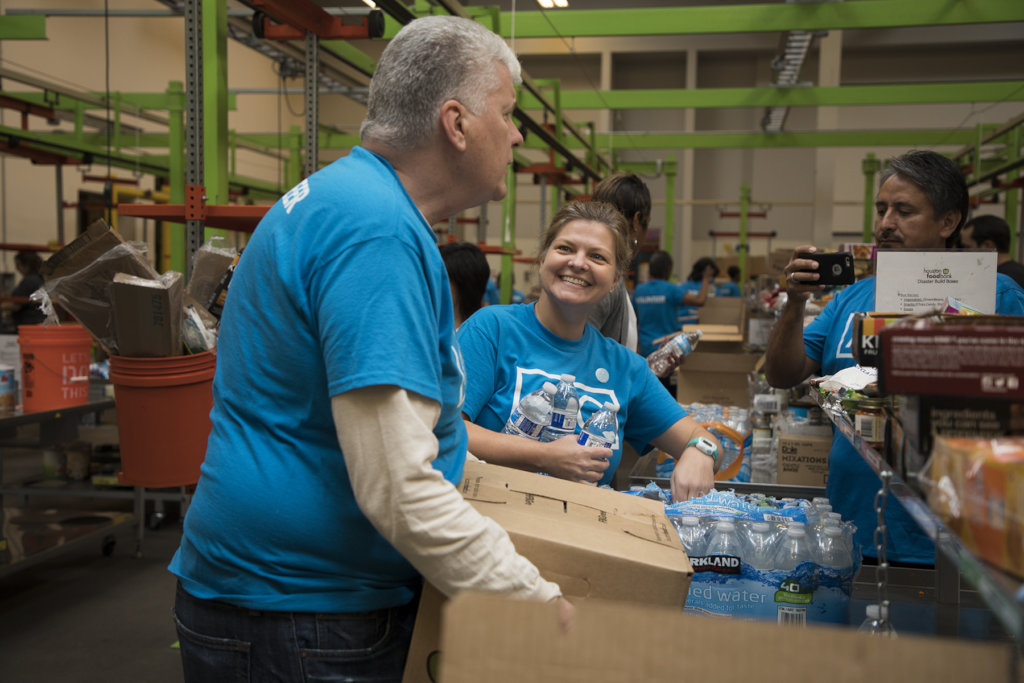 Photo from the Houston Food Bank 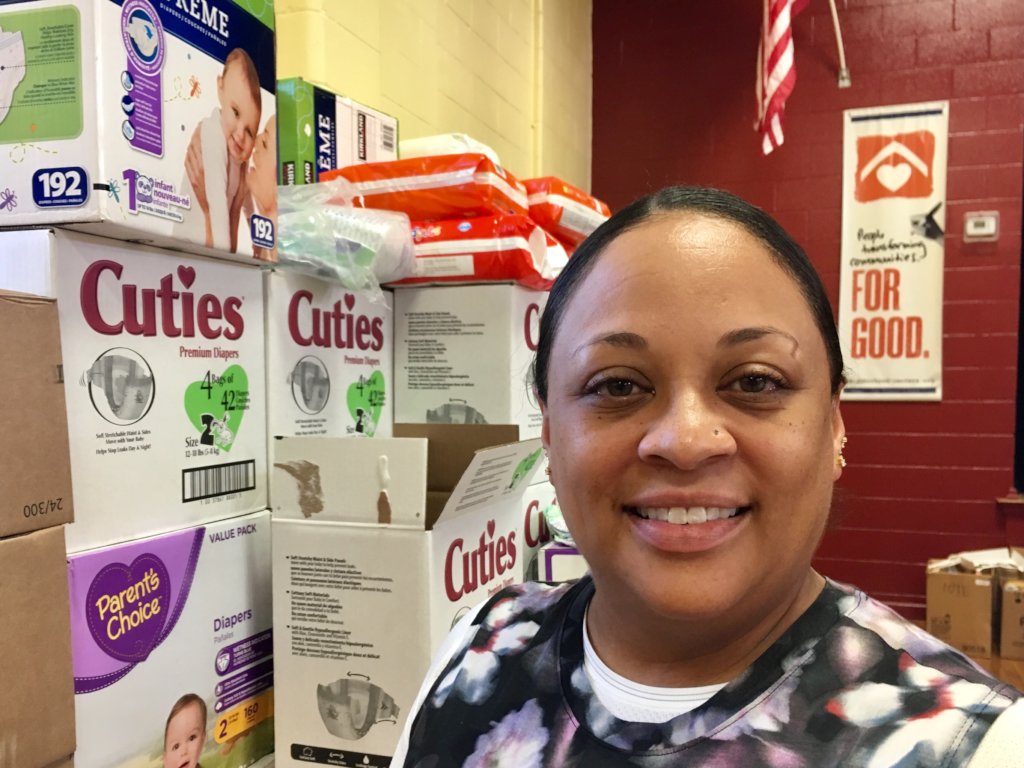 GlobalGiving on the ground in Texas 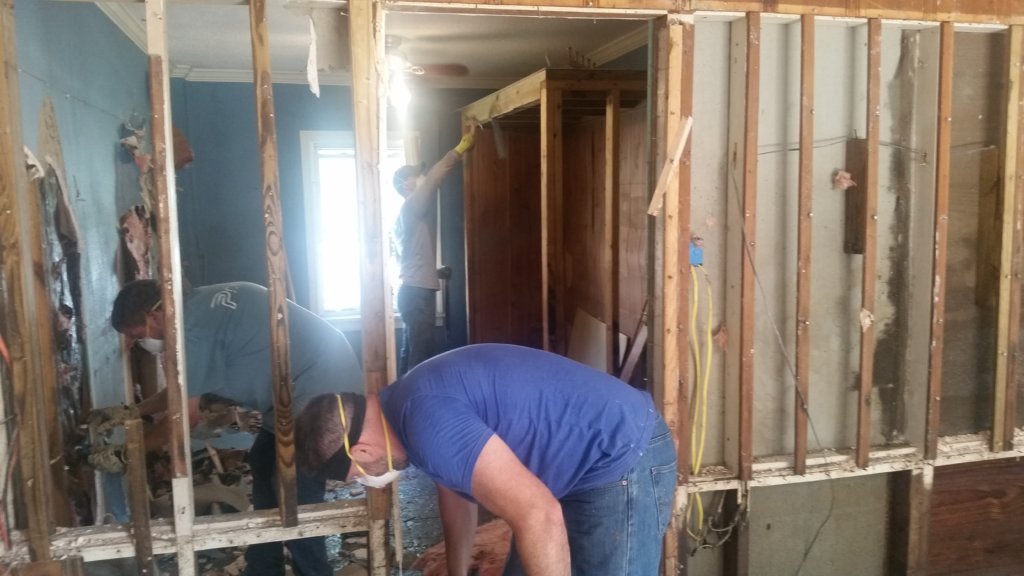 More than 32,000 donors like you have come together to raise more $4.5 million in support relief and recovery efforts in South Texas. Thank you for your generosity! In addition to the immediate relief work many of you funded in the first weeks following the the storm, your donations are now supporting 16 more organizations that are helping Texans navigate the long road to recovery.

In the nearly two months since Harvey made landfall, you have:

My colleague and I are in Houston this week meeting with our partners and seeing  the work you’ve made possible. What questions do you have for the people who are running the recovery operations? What would you like me to share? Send me an email at blake@globalgiving.org with Houston in the subject line and we’ll try to answer all your questions in our next report.

Thank you again for opening your hearts to communities affected by Hurricane Harvey. 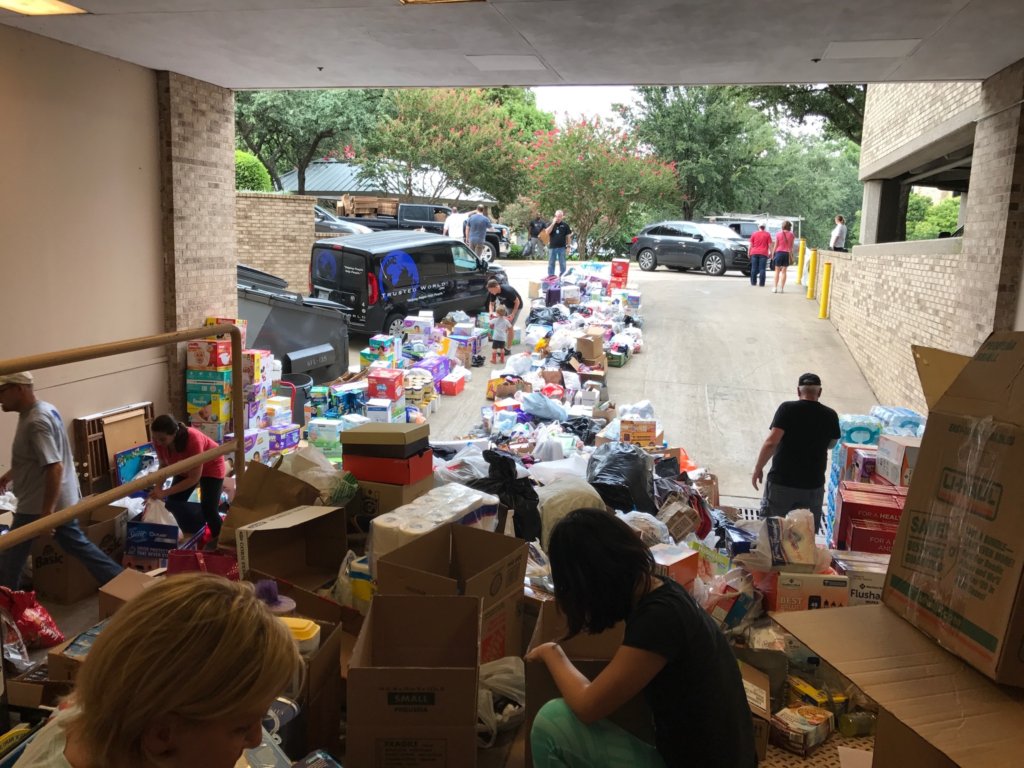 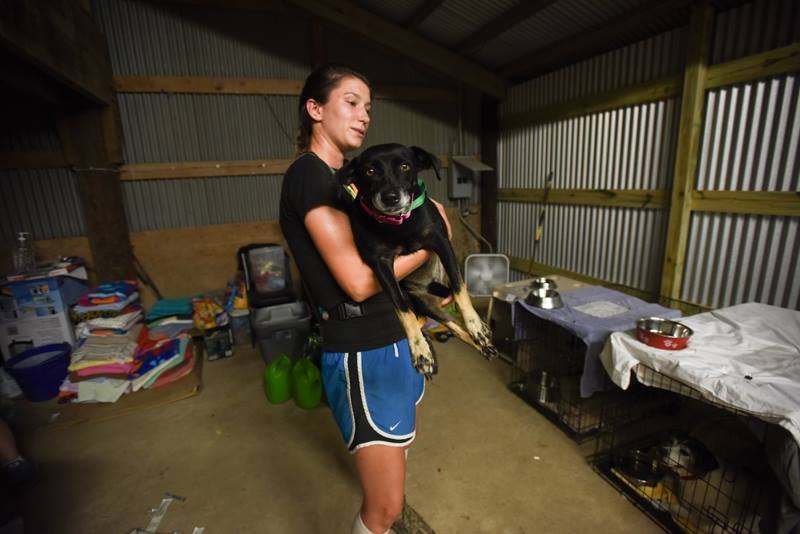 You're Working to Meet Immediate Needs in Texas 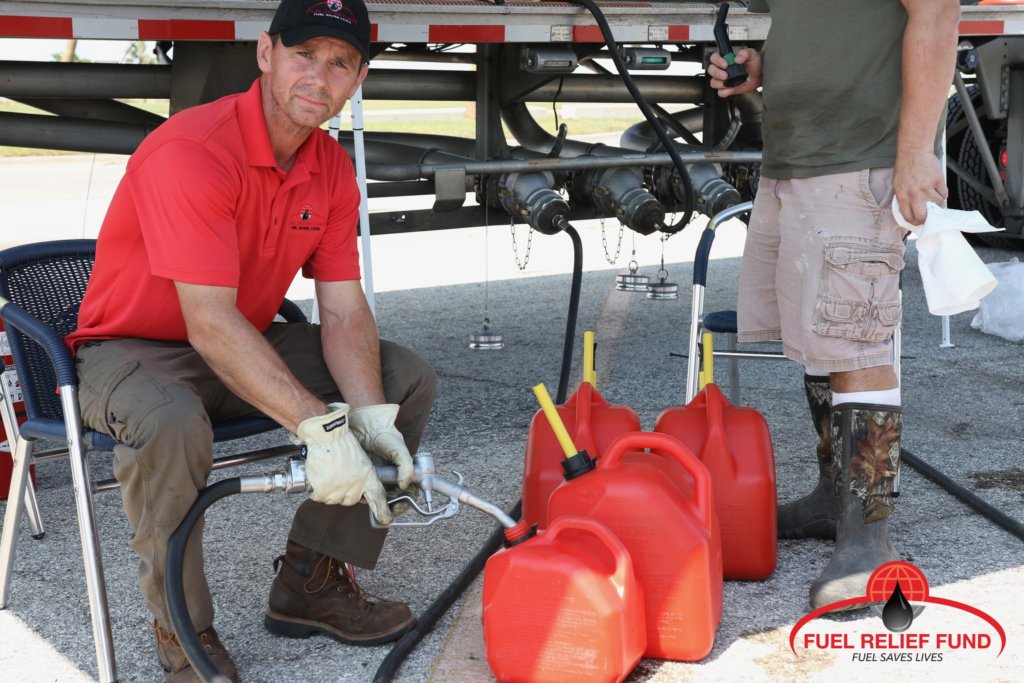 Three weeks ago, Hurricane Harvey made landfall in Rockport, Texas as a category 4 storm. People throughout the state lost homes, cars, and power.

Your donation was sent quickly to meet survivors’ immediate needs. The Fuel Relief Fund provided fuel to thousands of people in Texas just days after Harvey made landfall. This fuel was used to power emergency vehicles, police cars, fire trucks, and ambulances, as well as Texans’ cars so they could leave the area. In Rockport and Port Aransas, where there were no working gas stations after the storm, Fuel Relief Fund gave away nearly 16,000 gallons of gasoline and 1,750 gallons of diesel. In Silsbee, a town severely affected by the floods, they gave away almost 3,500 gallons of gasoline and 300 gallons of diesel.

“Fuel Relief Fund came to our small town during Hurricane Harvey when we were desperate for fuel,” said Staci, who received fuel from the Fund. “Our emergency vehicles needed fuel to take care of our community. We appreciate them more than anyone could ever know. I will forever remember you! Thank you guys for taking time away from your families to take care of our families.”

Fuel was not only necessary for vehicles, but also for many people who solely relied on generators to power their homes. As we’ve seen from the news coming out of Florida this past week, power outages can be dangerous and even deadly after a disaster.

The incredible fuel distribution effort was powered by volunteers who worked tirelessly all day, mostly sleeping in their cars or trucks.  Watch  a short video of their Harvey work here.

Most fuel stations in the affected areas in Texas have now opened and citizens and local first responders are able to get fuel. Fuel Relief Fund has moved on to work in Florida after Hurricane Irma, but the residents of Texas won’t forget your support.

Many of our partners are still hard at work in Texas and starting to think about the medium- and long-term recovery.  Even as the Harvey headlines fade in the coming weeks and months, we’ll continue to report on the vital work made possible by your generous donation. 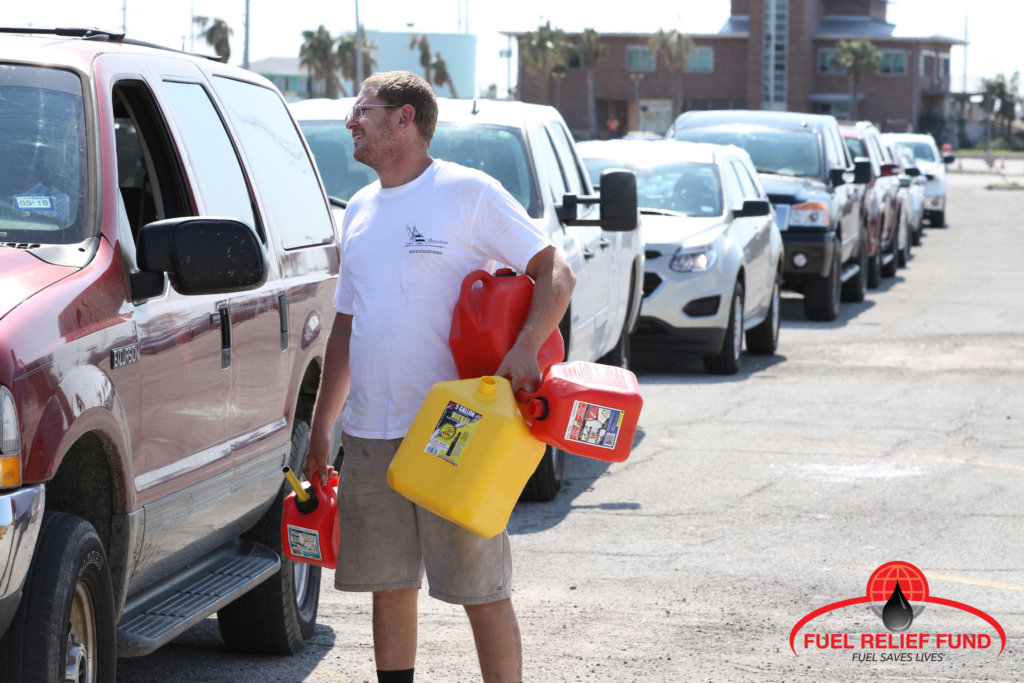 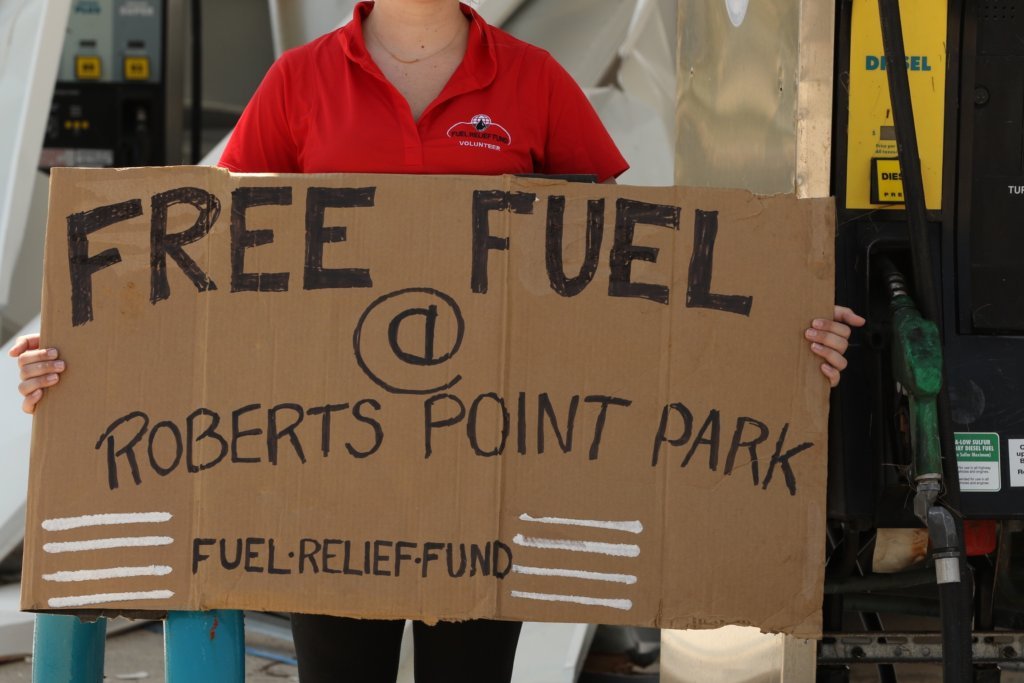 Your Hurricane Harvey donation at work 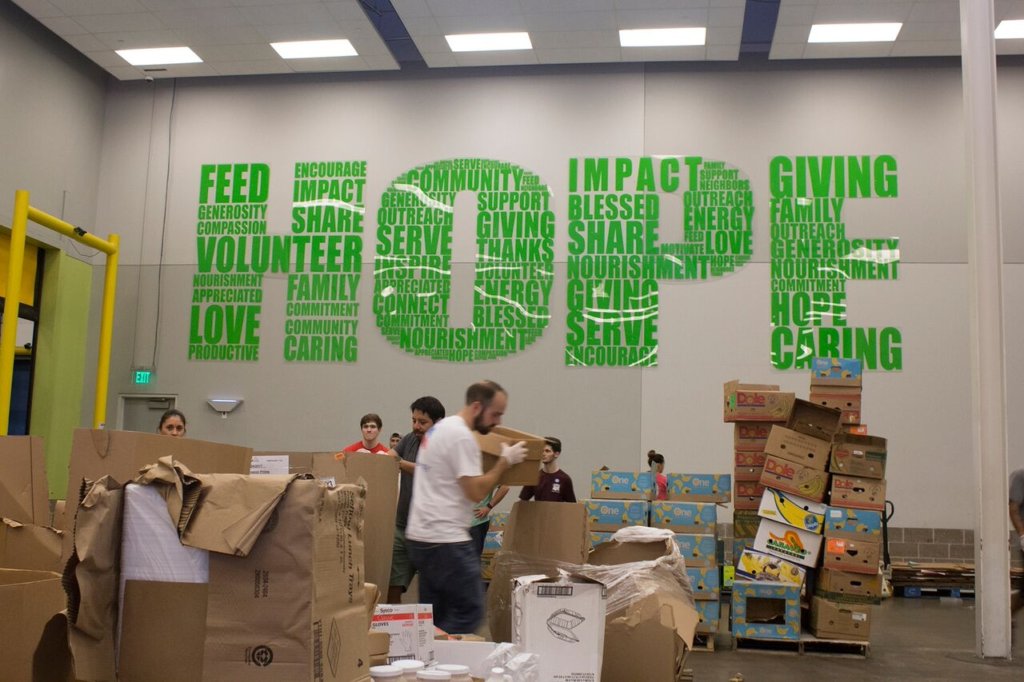 In the seven days since Hurricane Harvey made landfall on the Gulf Coast of Texas, its lashing winds, torrential rain, and catastrophic flooding have wrought countless scenes of devastation and heartbreak. We've seen thousands of homes destroyed, entire neighborhoods submerged, and families huddled on the roofs of the homes and the hoods of their cars to escape rising flood waters.

But alongside those harrowing images none of us will soon forget, the last seven days have shown us something else as well, something more powerful and lasting than any storm: the inherent goodness of people from every corner in the world, eager to help those in need.

We've seen first responders—some official, some not—navigating neighborhoods in boats, rescuing families trapped by the flooding. We've seen people readily opening their homes to strangers driven from theirs. And here at our office in Washington, D.C., we've witnessed, once again, the overwhelming generosity and empathy of our community of GlobalGivers like you.

In these past seven days, more than 20,000 of you have come together to raise $1.9 million to support relief and recovery efforts in South Texas, and today we've just sent our first round of funding from the Hurricane Harvey Relief Fund to a group of seven vetted, local nonprofits delivering vital aid to survivors. Your donations have gone to support:

It's likely we'll continue to see more scenes of the destruction Harvey has caused across the Gulf Coast in the days and weeks to come. The flood waters will eventually recede, but the tide of compassion and generosity you've created will continue to rise, helping the communities impacted by Harvey recover and rebuild. And stay tuned—we'll be keeping you updated with regular reports about the impact of your donation and the progress being made by our partners on the ground.

Thank you again for your generosity,

Britt and the entire GlobalGiving team 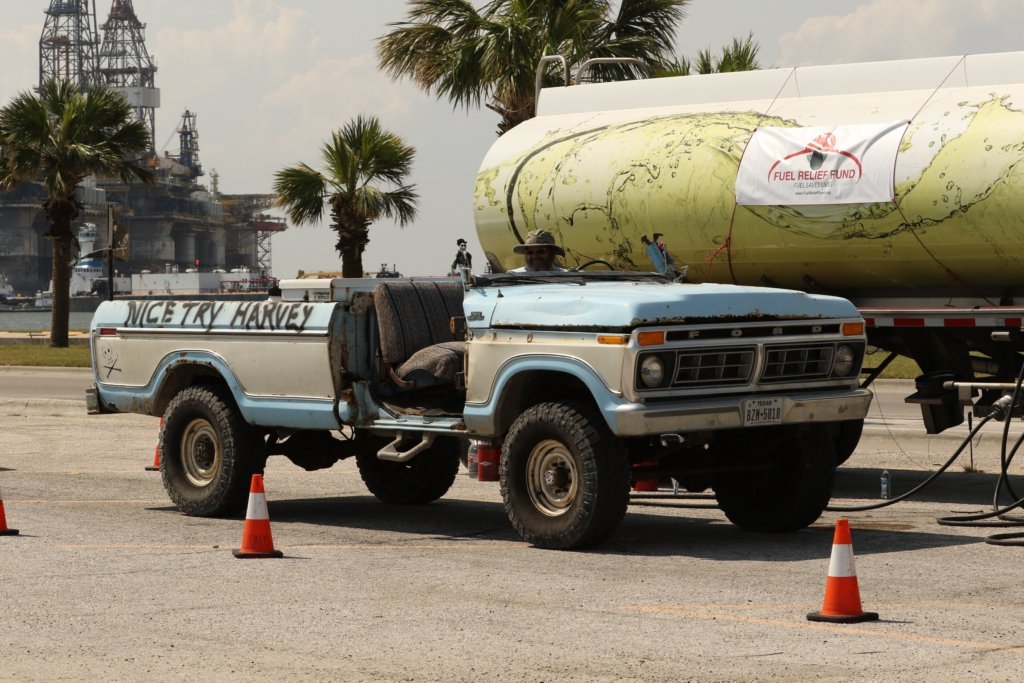 GlobalGiving
Guarantee
Donate https://www.globalgiving.org/dy/cart/view/gg.html?cmd=addItem&projid=29357&rf=microdata&frequency=ONCE&amount=25
Please Note
WARNING: Javascript is currently disabled or is not available in your browser. GlobalGiving makes extensive use of Javascript and will not function properly with Javascript disabled. Please enable Javascript and refresh this page.