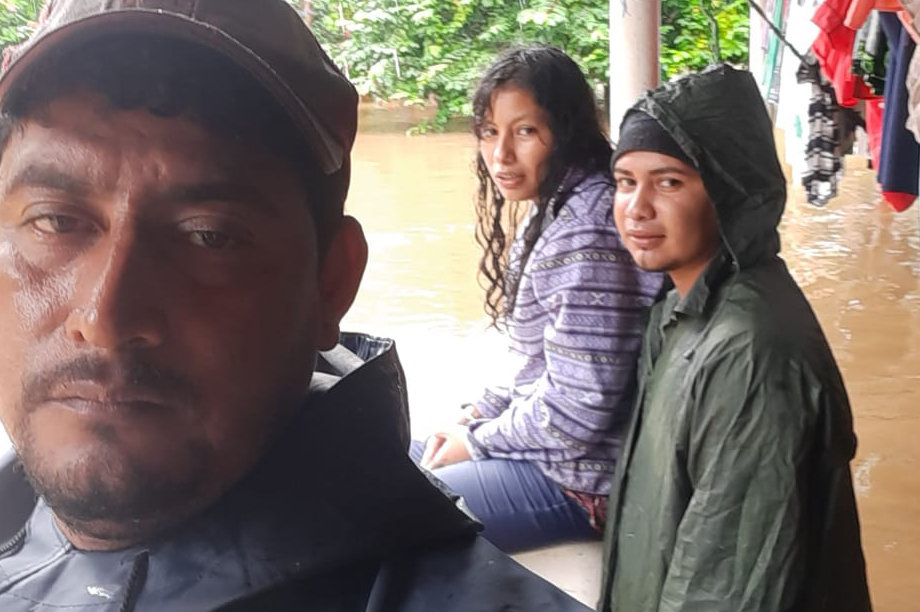 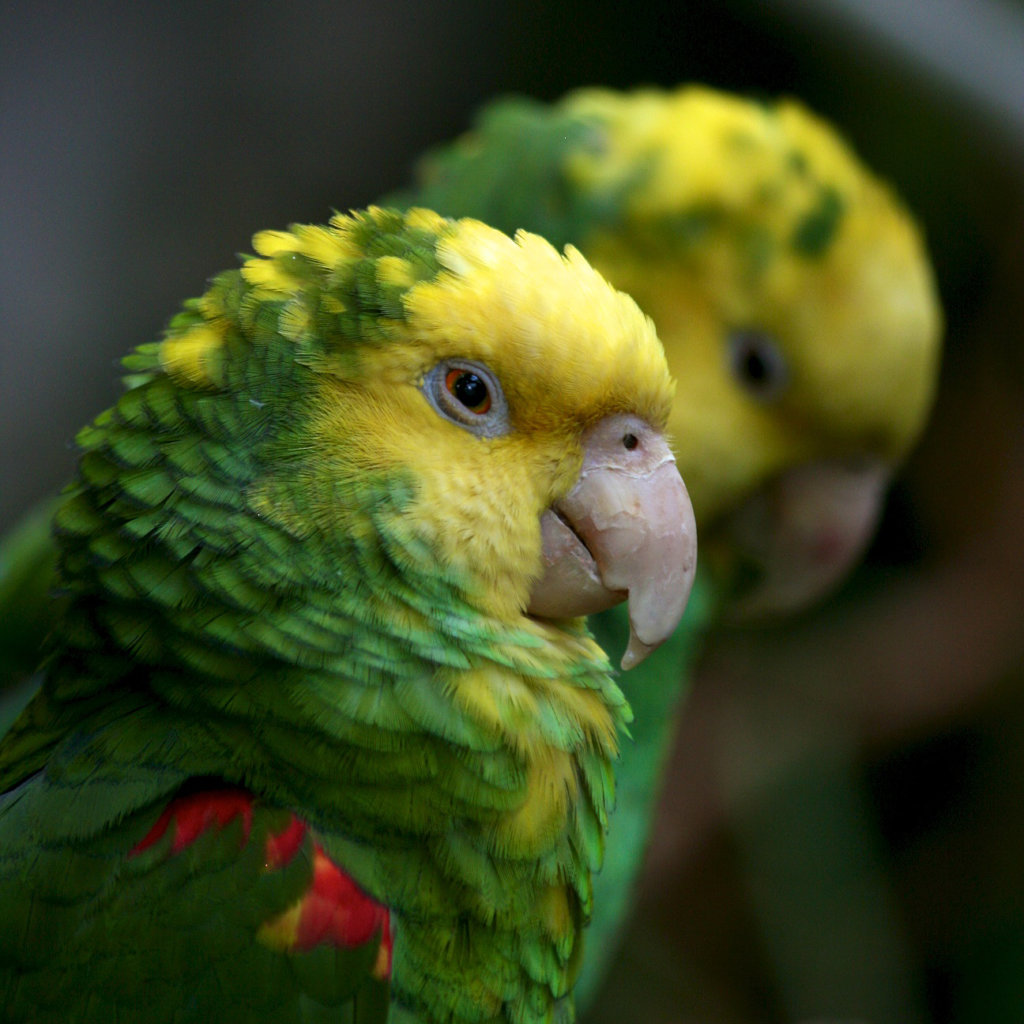 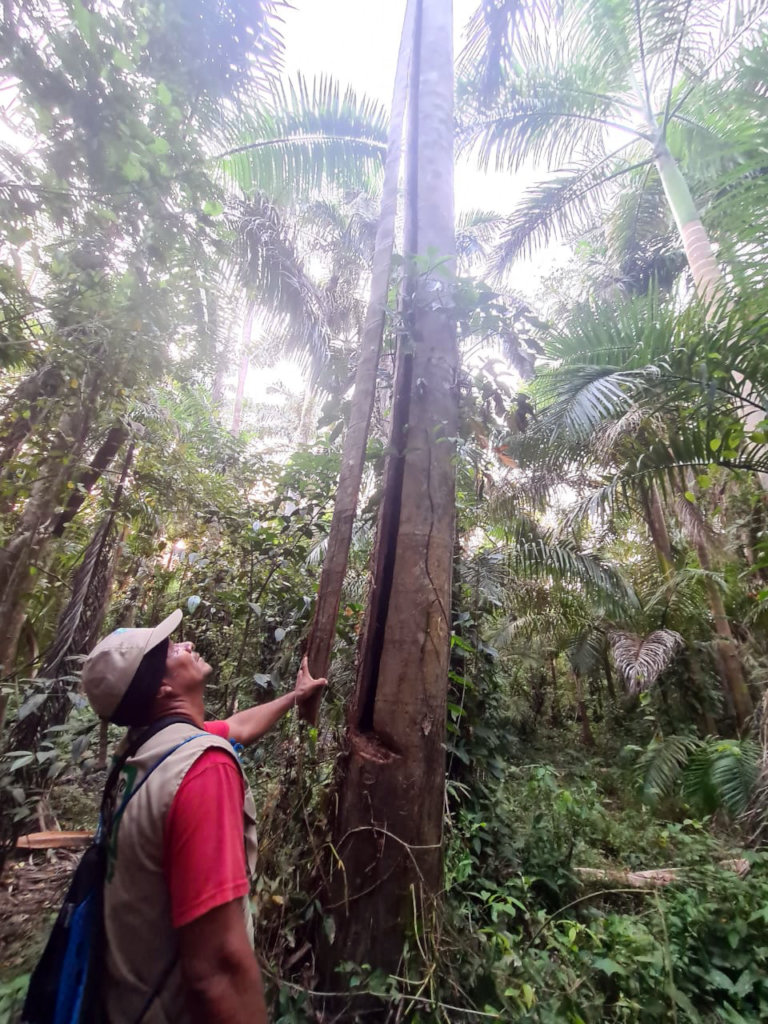 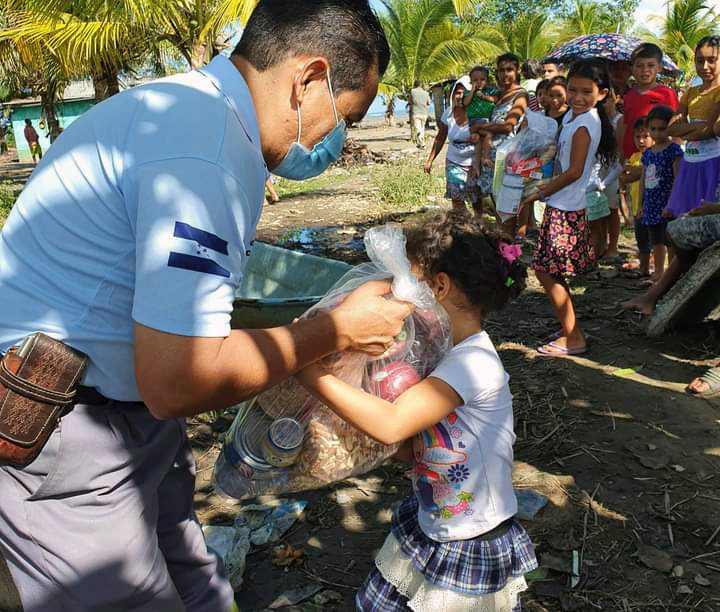 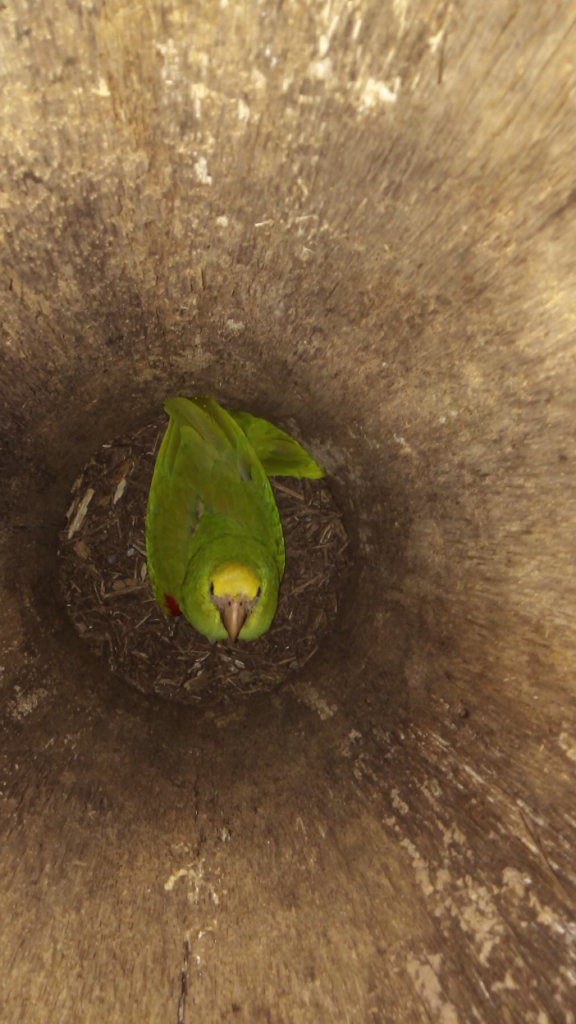 Since this time of year yellow-headed amazon parrots in northeastern Guatemala do not nest, this project has not had much activity during the past few months. However, in November, One Earth Conservation and our partners constructed and placed into trees three different kinds of experimental artificial nest boxes made of wood (see accompanying photos of this work). Our hope is that this new nest box design will keep bees from taking over the boxes from the birds. If this new design is successful, we will place more in the future.

February begins the new nesting season and we understand that we need to put much more force into protection, as half of our registered nests were poached this past year. At this level of poaching, the population of yellow-headed amazons will continue to decrease. One Earth Conservation is working with local communities in Guatemala and government authorities to see if we can increase our efforts together. Thanks to you, we have a team on the ground that has dramatically supported these parrots and the people who live with them. 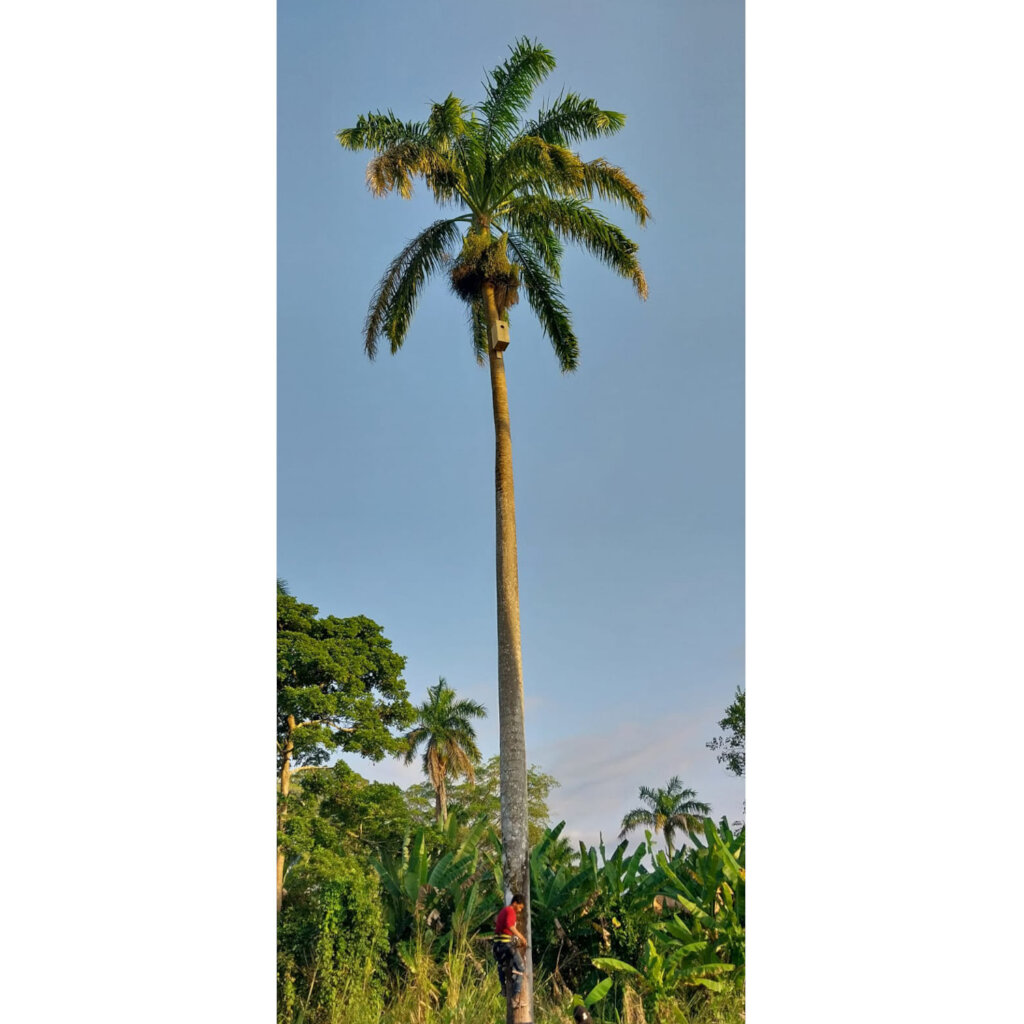 With the funds raised on GlobalGiving and other funding, we were able to assist local government patrols with undertaking 10 visits to our conservation areas. The government agency, CONAP, also assisted with nest box placement and responded immediately when local parrot rangers reported poaching activity in their conservation areas. We were able to install ten nest boxes but, unfortunately, over half of them were occupied by Africanized bees and the parrots were not able to use them. We plan to install more nest boxes in November, utilizing methods that will repel bees.

Dr. LoraKim Joyner visited the project’s conservation sites in May 2022 and conducted tree climbing instruction, as well as nest monitoring and protection training. She also brought needed equipment with her, which will vastly improve the capacity and safety for the people who are climbing nest trees.

One Earth Conservation also offered a bi-coastal parrot conservation workshop in May that included this project and our yellow-naped amazon project on the southern coast of Guatemala. This workshop not only provided training and increased the skills of Guatemalan parrot conservationists, but it also increased social capital and allowed all participants to coordinate, at a national level, how best to address the needs of amazon parrots in Guatemala.

From February to mid-June we were also able to support three people with stipends who work in the Pantanal ranch and six other people in the community of Quineles. No nests were poached in Quineles, but only two nests successfully fledged chicks this year. However, even these two would not have fledged without the parrot ranger patrols. In Pantanal, we lost four nests to poachers, as these nests are located far from oversight and have historically been poached for years. However, three nests near this location were able to successfully fledge chicks.

We know now that we need to incorporate the presence of more governmental authorities camping at these two nesting sites, and another one where we, up to now, have not been able to conduct nest monitoring and protection. With our partners, we are developing a logistical and financial plan to make this happen. We also plan to reengage with education and conscious-raising activities, critical for any conservation project, that focus on the importance of stopping the illegal trade in wild parrots.

Our annual parrot population count occurred in late July and we assisted with scientific oversight and supported community members to receive stipends during this important week-long count. 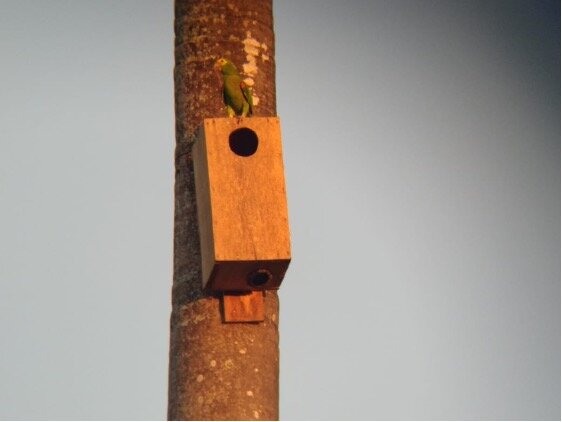 Nest boxes were a hit with the parrots and bees 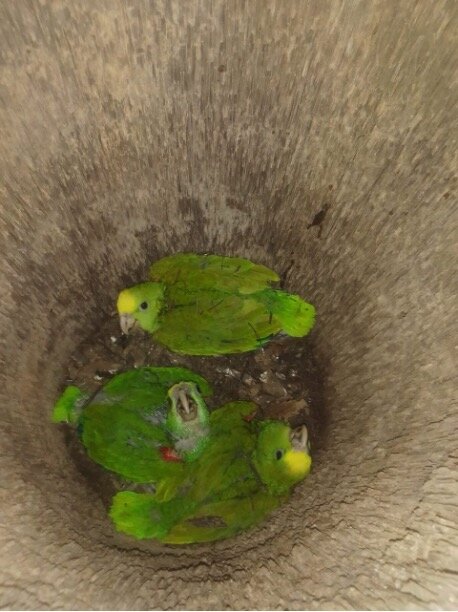 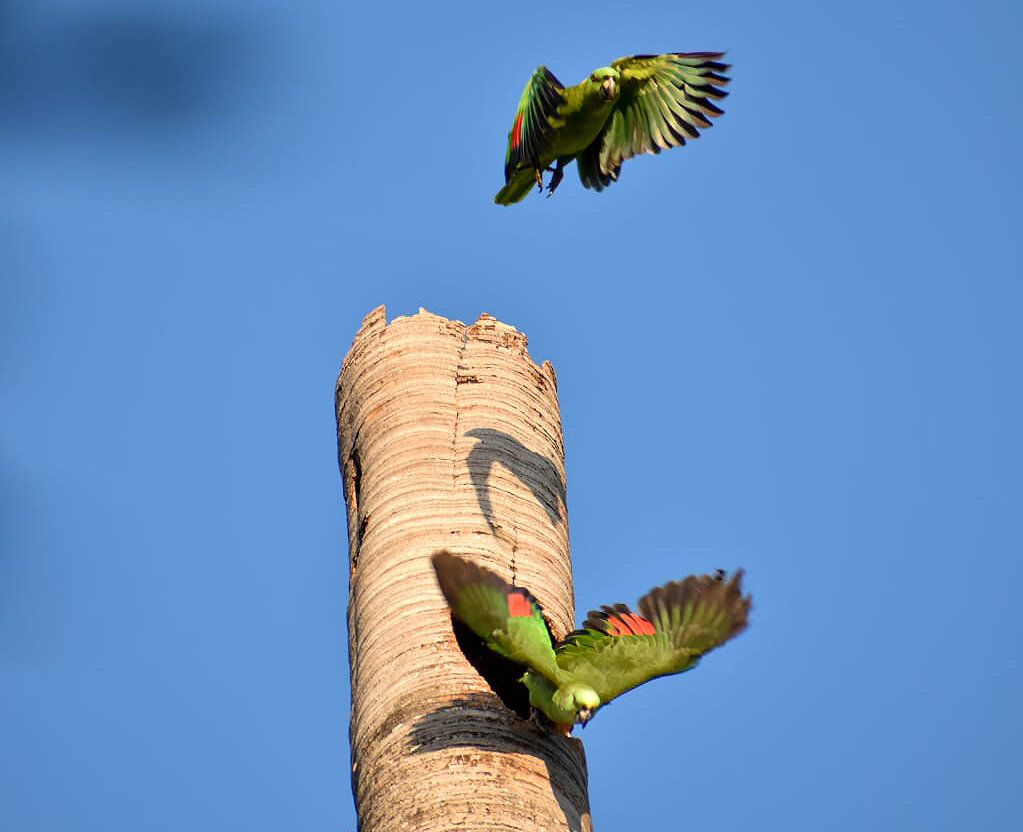 The breeding season of the endangered yellow-headed amazon has begun in Guatemala. Project participants (parrot rangers) were able to complete installing 10 nest boxes in one of the project communities in preparation for this. None of the nest boxes are active so far.

The parrot rangers have found 11 active nests in trees in two different areas so far. An important milestone for the project is that this is the first year that the rangers are climbing trees to see if nests are active and to monitor the chicks.

Six of the people from this project are traveling to a workshop on the south coast of Guatemala later this year and they will be presenting at the workshop (One Earth Conservation has a second project on the south coast that focuses on the yellow-naped amazon parrot). This workshop will be the first time that participants from both projects in Guatemala, who are working with two different endangered amazon species, will be able to share information and learn from each other.

Dr. LoraKim Joyner is traveling to the project site in early May to review all active nests and the project as a whole. 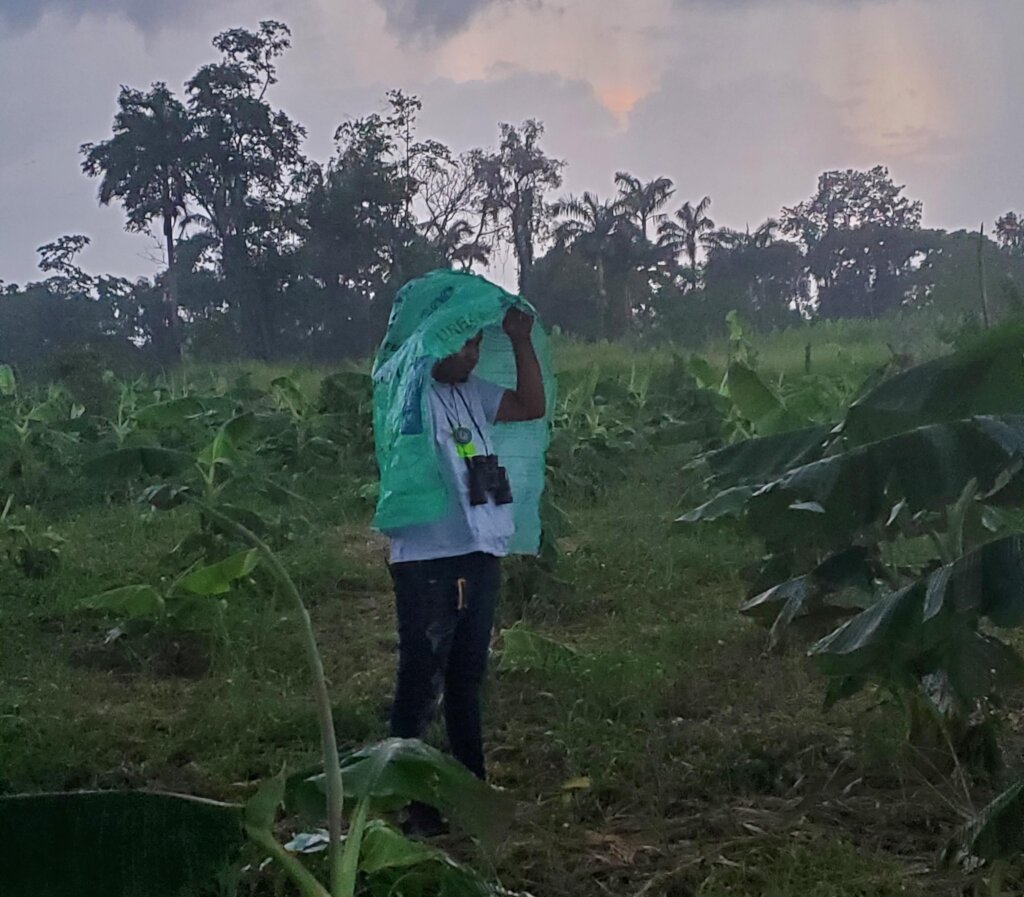 Parrot ranger working in the rain

The time between our last report in September 2021 and the present is a quieter time for One Earth Conservation’s yellow-headed amazon project. This is because the breeding season is over and our annual parrot count was completed in July 2021.

Currently, project participants are in the process of installing 10 nest boxes in one of the project communities. These are needed, because there is a shortage of trees for nesting due to the hurricanes and habitat loss. The next nesting season will begin in February 2022 and we hope to achieve even better results this year, with more nests and people being supported.

In the meantime, our government partner in Guatemala, CONAP, continues to patrol the project area, as you can see in the two photos included with this report. 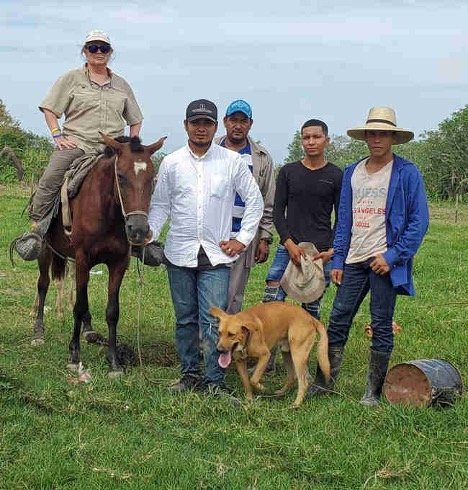 On our way into flooded Guatemalan village

In July 2021, One Earth Conservation teamed up with its partners, Cuerpo de Conservación in Honduras and CONAP in Guatemala, to conduct the first bi-national parrot population count in this Atlantic coast region. It involved over 25 people! Our target species is the endangered yellow-headed amazon parrot, but we counted all the parrot species, because illegal trapping for the pet trade is high and all parrot populations in this area are under threat. We do this even knowing that counting parrots is notoriously imprecise. With training and repeated counts, we can improve precision and grow our ability to analyze possible trends over the years, which would let us know if we are having success or not. This means painstakingly using the same methodology between people and between years, and crunching the data long after the data is collected.

One Earth Conservation also supported the government in Guatemala to conduct bimonthly patrols of nesting areas for 4.5 months between February and June 2021. During this time a total of 16 additional people from Honduras and Guatemala were hired to protect nests. We emphasize parrot monitoring to grow the chances for success, to see if we are having success, and to see if we need to change our activities to decrease harm and increase benefit.

In Cuyamel, Honduras, it’s possible that all three nests of yellow-headed amazon were poached. Even if they did fledge, this is a devastatingly low number of active nests. The nesting season ended in May. In Punta Manabique, Guatemala, only one nest of 14 was poached. This is an incredible result given the weekly presence of poachers. The nesting season ended in June.

Here’s a story of a heroic young woman who saved some parrots from poachers in May 2021, as told by LoraKim Joyner:

“The young parrot protector, Evelyn, heard some voices coming towards her, and so she hid. She was by herself protecting a yellow-headed parrot nest a long way from home. The five men looked like poachers to her and indeed they halted in the muddy water at the base of the nest tree. She backed away and took off running to warn other rangers who were guarding a more distant nest. With reinforcements she returned to the nest and confronted the men who lied that they weren’t there to poach the nest of this highly endangered bird in Guatemala. Not believing them, the parrot rangers escorted the men out of the community lands. Later that same day they had to repeat this process with two more presumed poachers. They were on super high alert and had caught these men, because just two weeks before poachers had come while the rangers had taken a lunch break back in the village and the poachers took advantage of this and robbed one of the nests.

A few days after Evelyn’s heroic action, I went with the team of rangers, skirting the muddy pool, looking up at the nest tree while Evelyn told me her story. While she was talking one of the other rangers discovered a discarded bag that the poachers had hidden near the tree. The contents consisted of a saw, a rope, a flashlight, a towel, a water bottle, a plastic container with moldy food, and an empty beer can. Poachers travel light and move fast, so I congratulated this committed team in being able to ward off the poachers who, without their actions, surely would have taken the rest of their nests.” 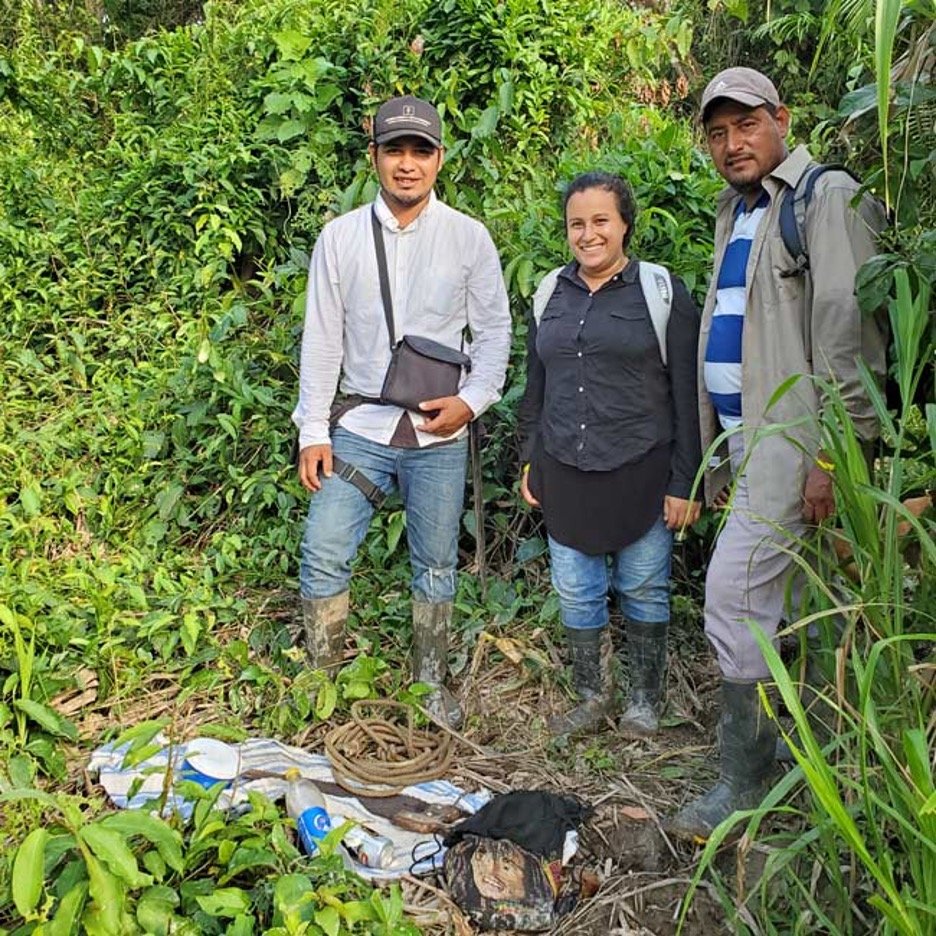 Project Leader:
Gail Koelln
Hollis Hills, NY United States
$2,518 raised of $10,000 goal
You last donated to this project on
57 donations
$7,482 to go
* Amounts in US Dollars
Donate Now
Donate once
Donate monthly
$10
USD
pays for one week of field transportation expenses to get to where the birds are
›
$40
USD
pays to build and place one nest box in a tree or other appropriate site for the endangered parrots to use
›
$65
USD
pays to install a sign marking a protected area
›
$100
USD
equips one conservation worker (ranger) for one season
›
$900
USD
pays for 20 people to do the annual population survey in July that trains and employs young people
›
$1,700
USD
pays for one hurricane victim to serve as a ranger, patrolling and protecting nests each year
›

GlobalGiving
Guarantee
Donate https://www.globalgiving.org/dy/cart/view/gg.html?cmd=addItem&projid=52359&rf=microdata&frequency=ONCE&amount=25
Please Note
WARNING: Javascript is currently disabled or is not available in your browser. GlobalGiving makes extensive use of Javascript and will not function properly with Javascript disabled. Please enable Javascript and refresh this page.