by National Network for Children 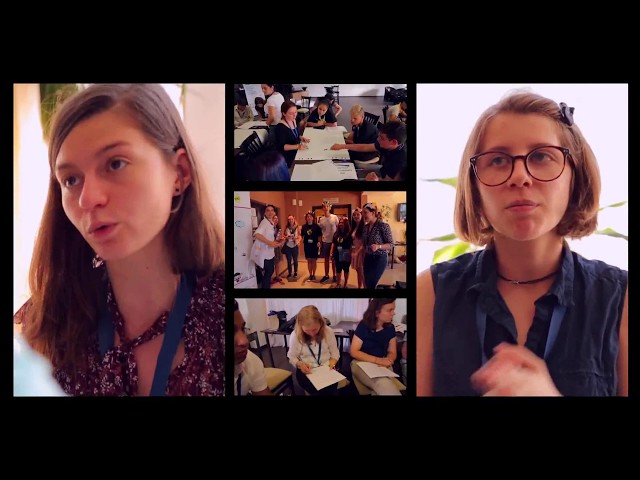 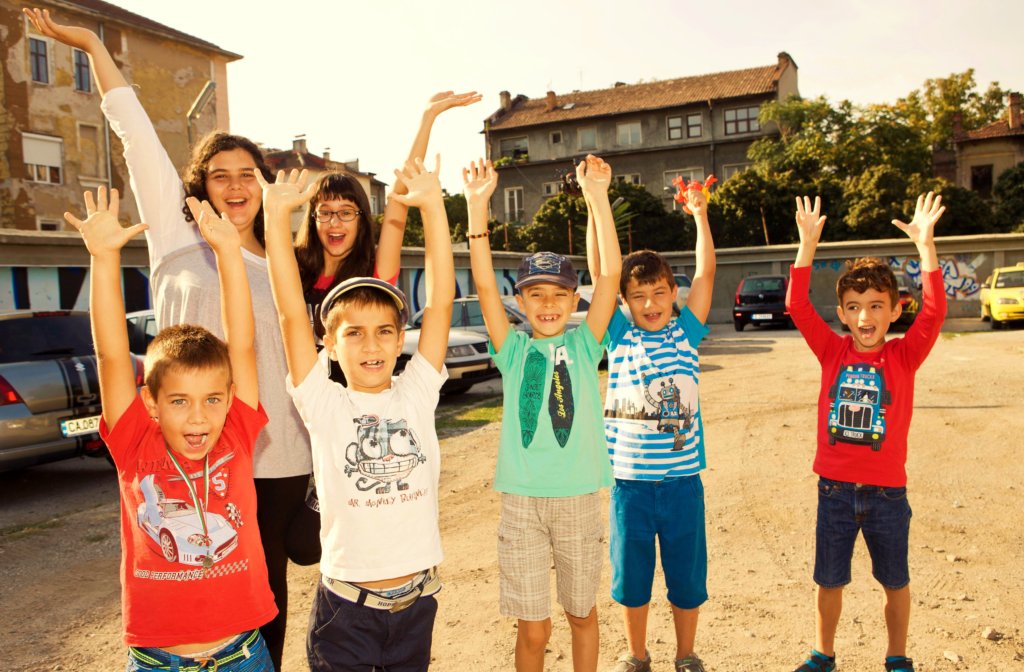 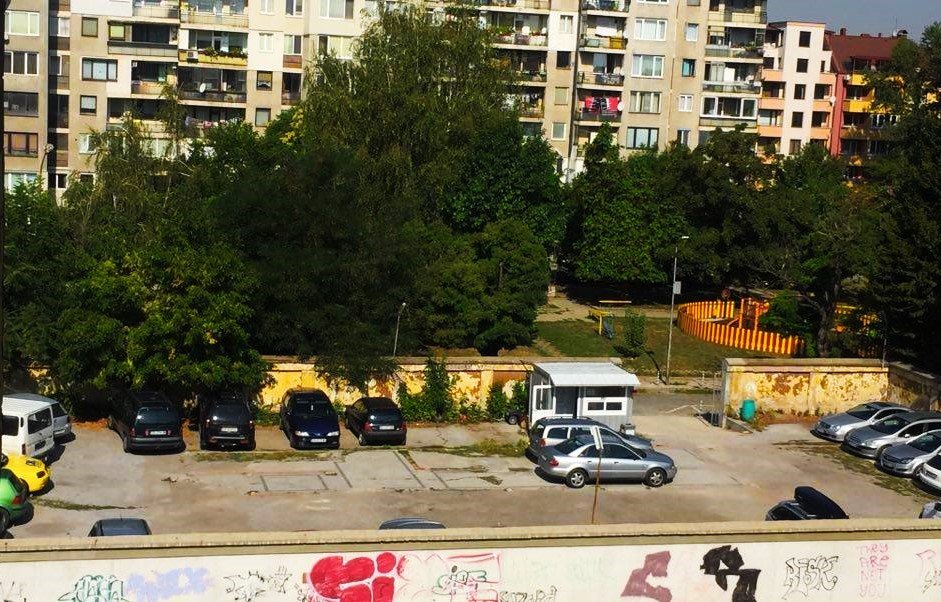 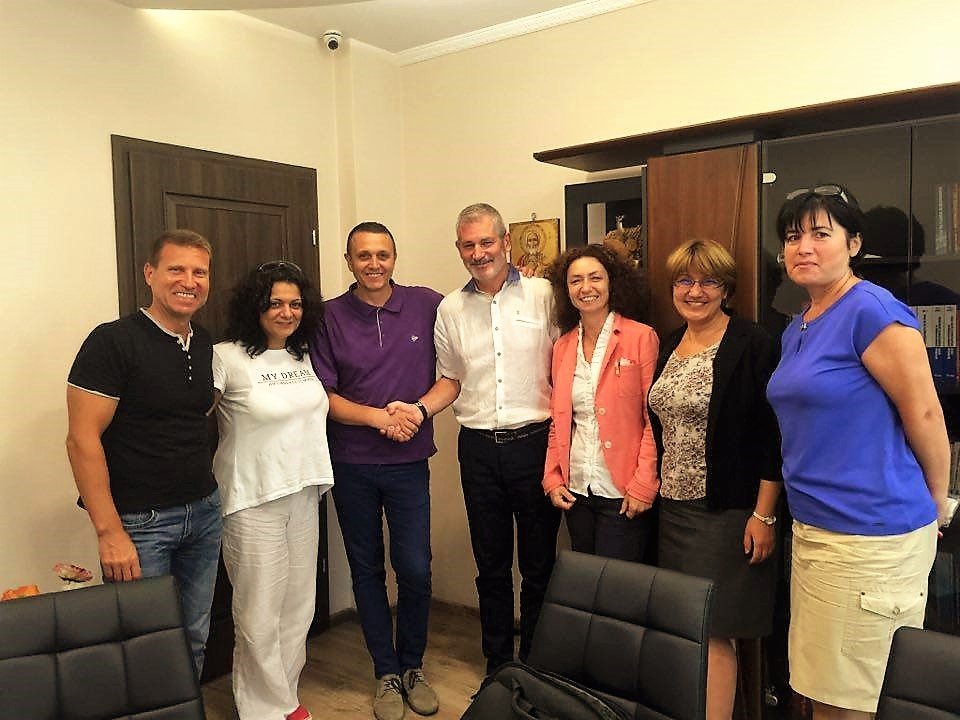 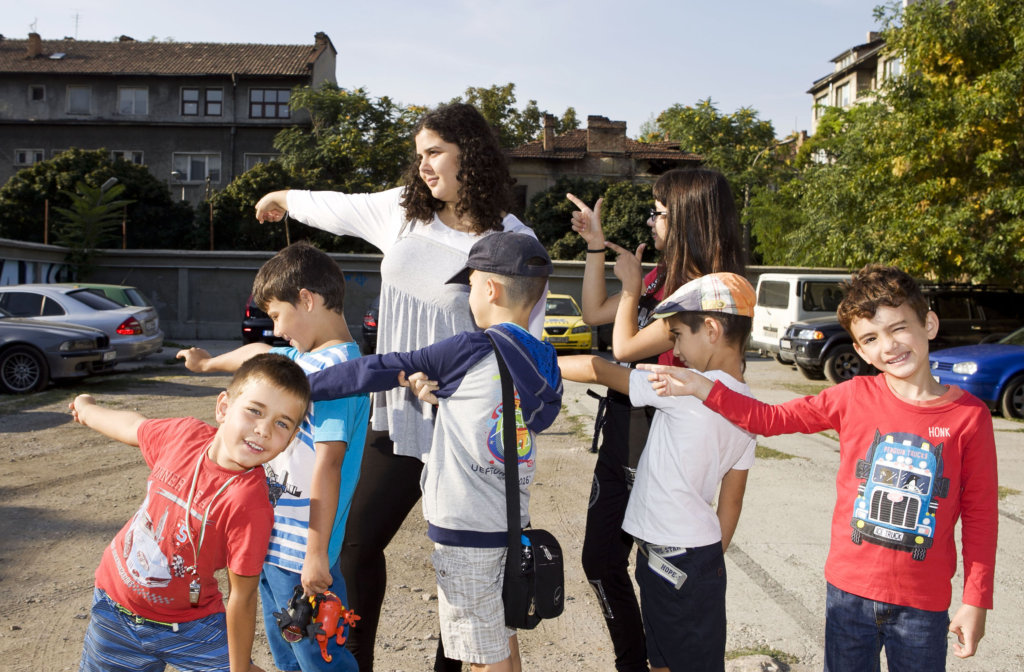 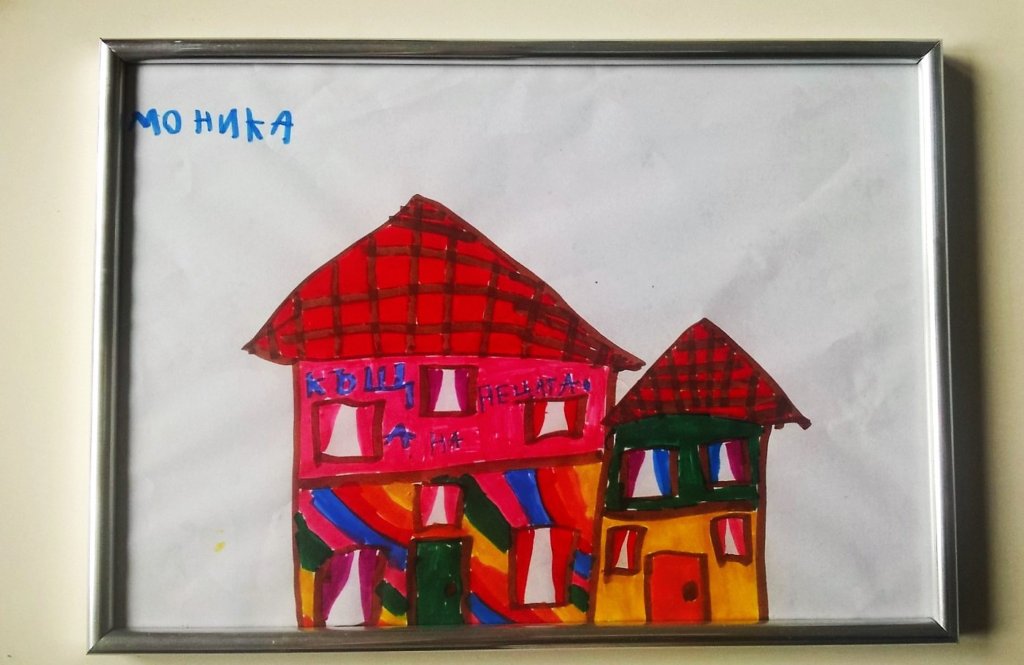 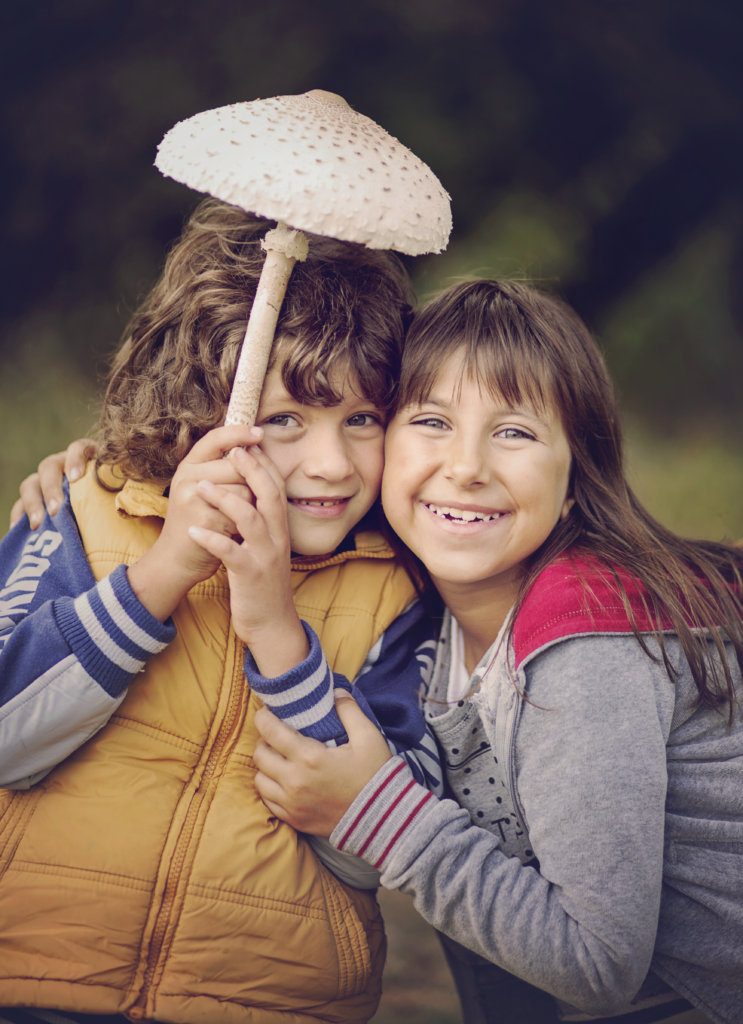 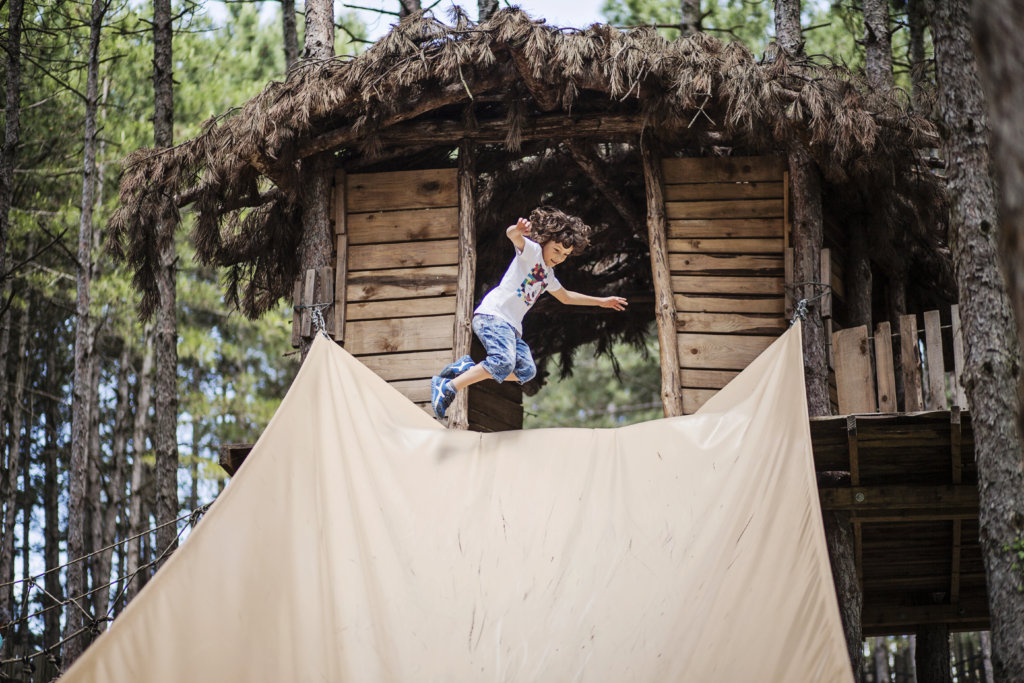 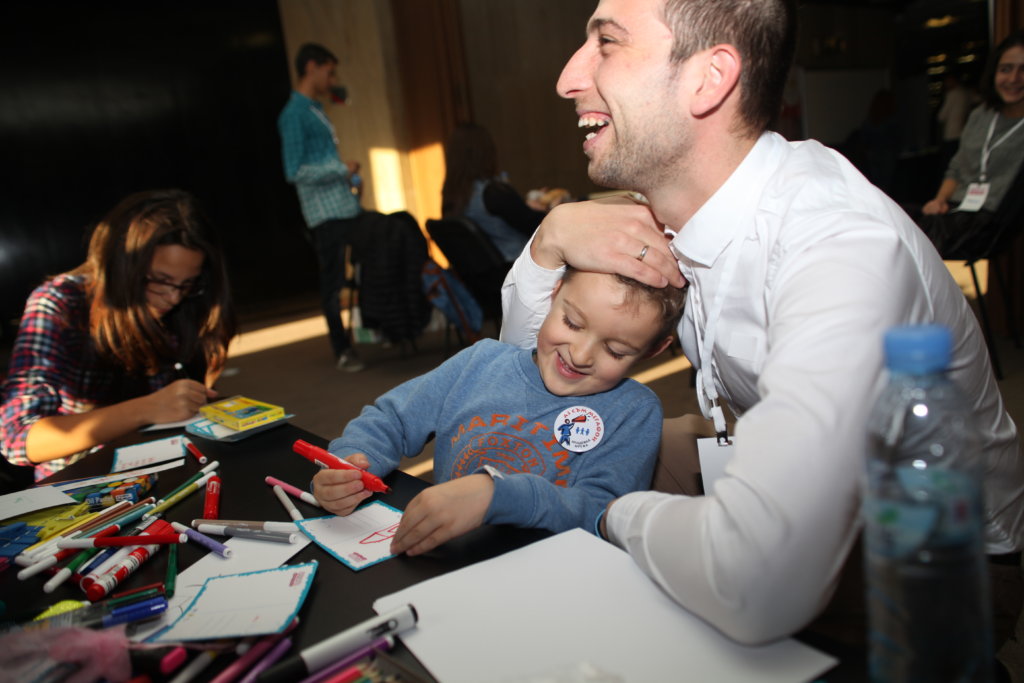 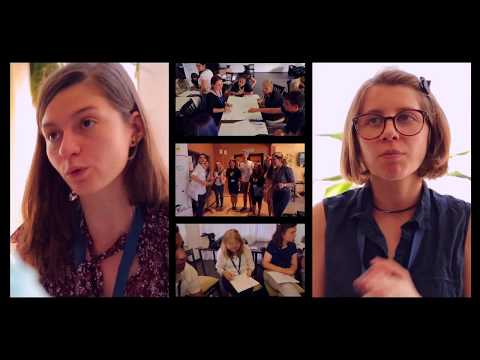 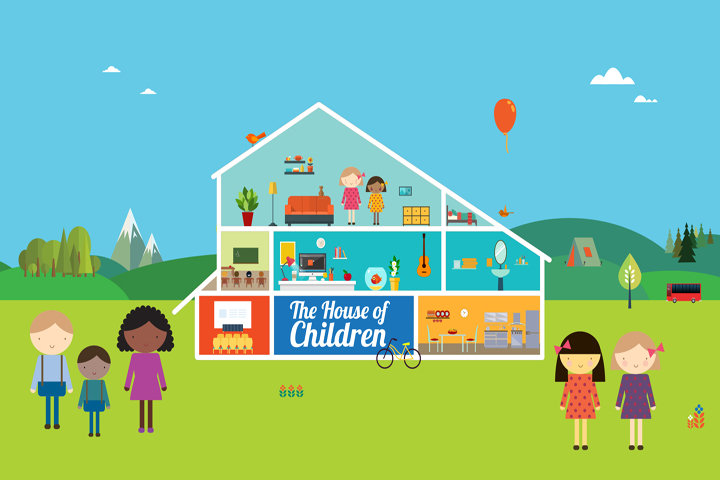 The task is to develop a concept for a national center for training, education and advocacy on children’s rights. The aim of the project is a recognizable place for events, training and meetings, related to the rights of children, the family and young people.

House of Children should combine a modern and attractive vision with functionality and energy efficiency.

The projects will be judged by a jury of the following experts:

Deadline for submission of the projects for the first stage of the contest is April 22, 2019.

The evaluation of the applications and selection of the three finalists in the competition will be done until May 13, 2019.

The project House of Children started in 2016 when the National Network for Children bought a plot with the financial support of two international foundations – OAK and Velux. The land is located on the boulevard “Hristo Botev” and the street “Sofronii Vrachanski” close to the 46th Primary School “Konstantin Fotinov” in Sofia.

It is planned the first sod to be made in the end of 2019 or beginning of 2020, and construction works to be completed in about two years.

The project aims to create a contemporary place for events and training for children and specialists in childcare. The House will provide support for families and an active and growing environment for children of different groups, ages, family background and interests. It  also will be a place for work and exchange of ideas of all 150 civil organizations, members of the Network, working for the well-being of Bulgarian children.

After being built, the House will be managed as a social enterprise and it would give sustainability in time and opportunity for young people coming out of institutions or foster care to work and train in labor skills.

If you are willing to support the House of Children project, you can donate via the web site of National Network for Children or become part of the campaign in the international platform GlobalGiving.

Thank you for your continued, faithful support of our dream House of Children.

A slap does not stay on the face, but in the heart

A short video was created by the National Network for Children and PULSE Foundation within the project “Children Help movement Against Physical Threatening and Emotional Repression”.

The statistic in the video is based on a national representative survey, conducted by Noema Agency, commissioned by the National Network for Children. The survey included parents, future parents/ young people and children.

88% of parents in Bulgaria are aware that slaps are an ineffective discipline method, but many of them continue to apply corporal punishment against their children. Although the use of physical punishment has been decreasing over the past 5 years, about 2/3 of parents have ever used corporal punishment and other traumatic practices such as spatial isolation, non-interference in case of risk of injury, causing discomfort by inconvenient pose or subduing. ¼ of parents systematically apply such practices against their children.

The annual Autumn School on Children’s Rights of the National Network for Children (NNC) took place between the 10th and 16th of September. The event gives start of the new group of eight organizations – eight adult professionals and 16 children – to take part in the so called “Megaphone” Programme. The intensive training during the Autumn School lays the foundations for a comprehensive understanding of children’s rights and the right to opinion, while in the same time children become part of the Megaphone Youth Network, which works closely with the NNC as an integral part of its structure and key annual advocacy and other activities.

Through a series of interactive exercises the young participants gained in-depth knowledge of their rights, and understanding of what NNC is and how it works in their preparation for the future challenges they will face within the Programme. In the meantime the adult professionals examined various child rights based approaches to their professional and organizational programming and daily work.

Their next meeting will be connected with the Voice it forum in Sofia, which will be held on the 20th of November on the occasion of the anniversary of the UN Convention on the Rights of the Child. 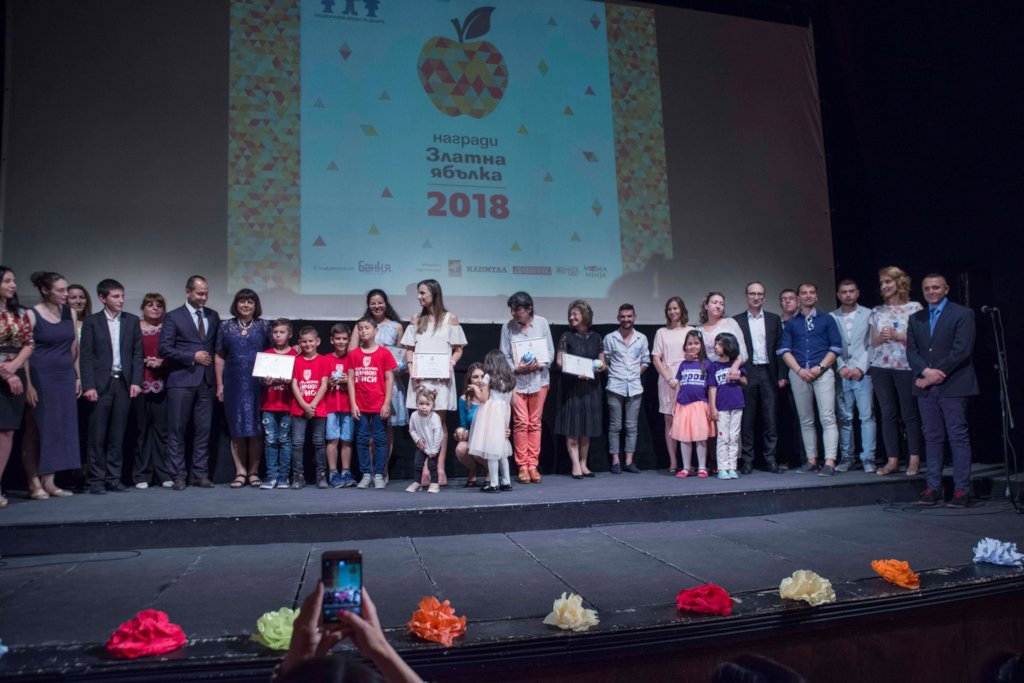 National Network for Children  presented for the eighth consecutive year the Golden Apple Awards that distinguish individuals, organizations and institutions with contribution to Bulgarian children well-being.

The ceremony was at the National Theater Academy “Krastyo Sarafov” in the presence of nearly 350 guests, friends and adherents of the cause.

The prizes were awarded in eight categories – Hero of Children, School, Hospital, Municipality, Journalist, Charity, Award for Contribution to the National Network for Children and Special Prize.

The Chairperson of the State Agency for Child Protection, Dr. Eleonora Lilova, was a special guest of the event. She greeted the participants and awarded an honorary diploma to National Network for Children.

Nominations for the awards, with exception of the Hero of Children category, come from all 150 organizations – members of  National Network for Children, working for children and families. The winners are selected by a special jury of experts and professionals.

For Hero of Children category, which this year gathered a record 39 nominations, the proposals come from the general public through the Golden Apple website. The choice of the winner in this category was made by the audience with online vote. This year nearly 3,000 people voted.

The winners are Dr. Tanja Andreeva and Daria Mukova – founders of the HealthyKid platform.  The two ladies developed an application, which directs parents to an appropriate doctors and medical institutions in case of urgent need. Bulgaria is the only country in the EU that does not have a specialized children’s hospital and the pediatrician Dr. Tanya Andreeva is a part of the initiative to create a Children’s Health Park, bringing together all medical specialties for children at one place.

The award for School took Primary School “Nikola Ikonomov” in Razgrad. The school has developed a comprehensive strategy which guarantees the rights of the children and modern education according to the new standards. The school teaches 635 students of different ethnic background and the pedagogical team manages to provide a relaxed creative atmosphere and education with no segregation on ethnic or religious ground.

The award in the category “Hospital” was won by  the hospital “Dr. Nikola Vassiliev”, Kyustendil. The hospital cooperates with NGOs and institutions in cases of children at risk and in other different cases. The hospital team actively works to keep children at risk in the medical facility, traces and advises pregnant women without insurance.

The award in the Journalist category was awarded to Bela Cholakova from “168 Hours” newspaper. Bela has been writing for years on the topic of adoption in its various aspects. Her materials positively and correctly examine the issue of adoption and are a step towards changing the value system of society.

The “Blagotvoritel” Award won the United Milk Company for “Milk for Everyone” project. More than 20 tonnes of dairy products have been donated within the program for the last 3 years and were distributed among homes, shelters, centers and poor families.

The Ombudsman of the Republic of Bulgaria, Maya Manolova, has been awarded the Special Award for Contributing to the Welfare of Children in Bulgaria. Mrs. Manolova has been working actively in the past three years to protect the rights and well-being of children.

The well known actor Ivaylo Zahariev and Daniela Zaharieva – a representative of the Megaphone Youth Network, host the ceremony.

Many children took part in the preparation of the event: art studio “Arteanci” has developed the statuettes of the Golden Apple Awards. The video, presenting the children’s view of the different categories, was shot with the participation of students from the 26th school Yordan Yovkov, Sofia. The vocal group Mickey Mouse raised the mood of the guests during the ceremony. 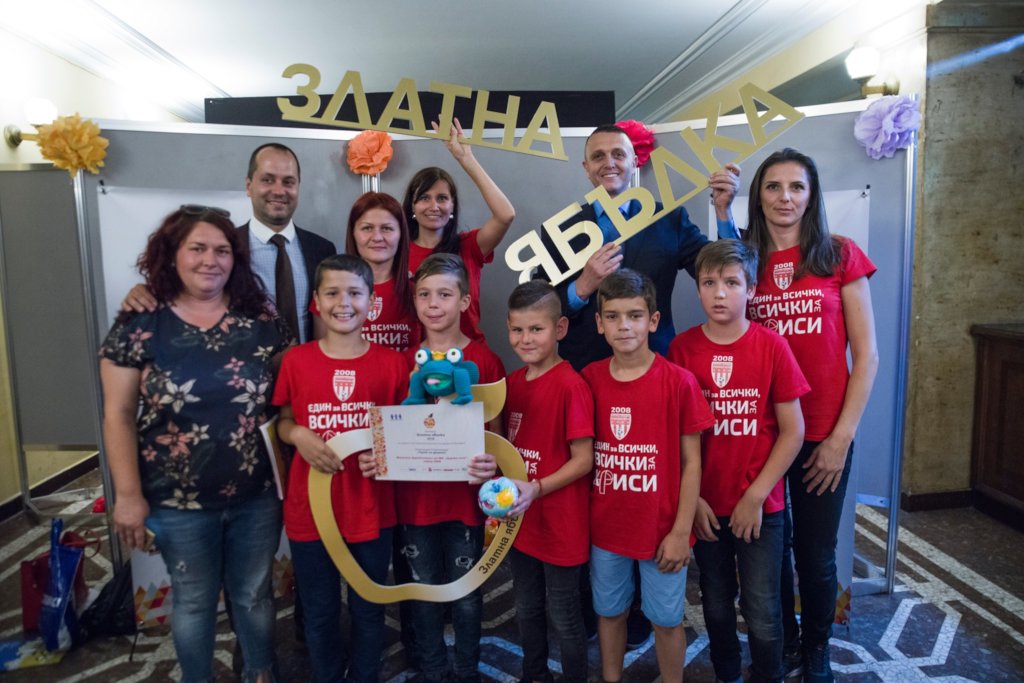 Support for the child Hrisi 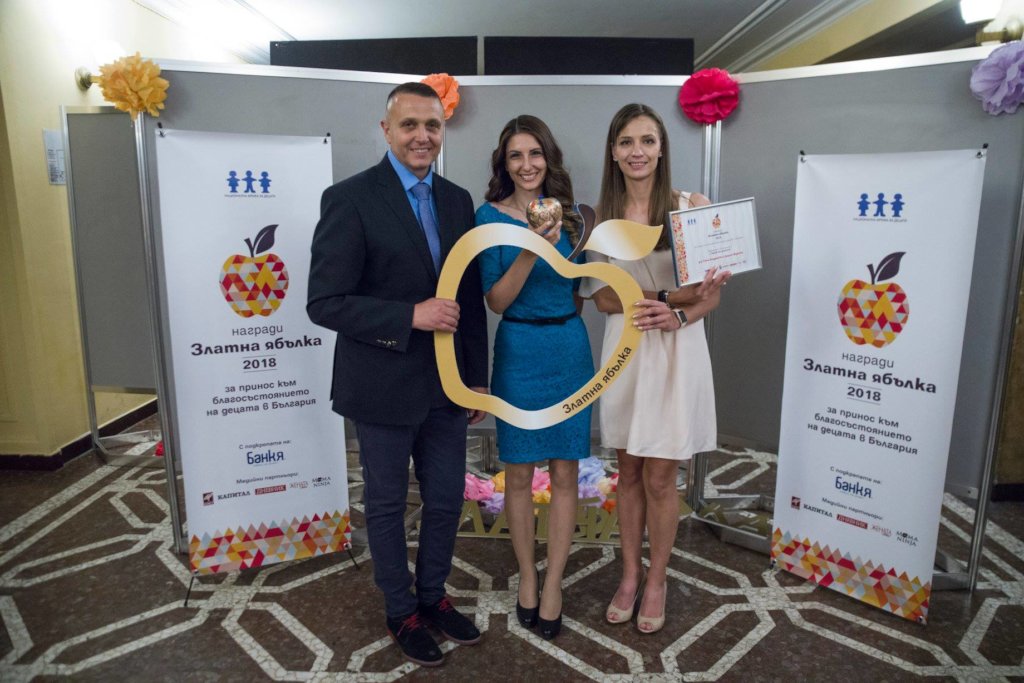 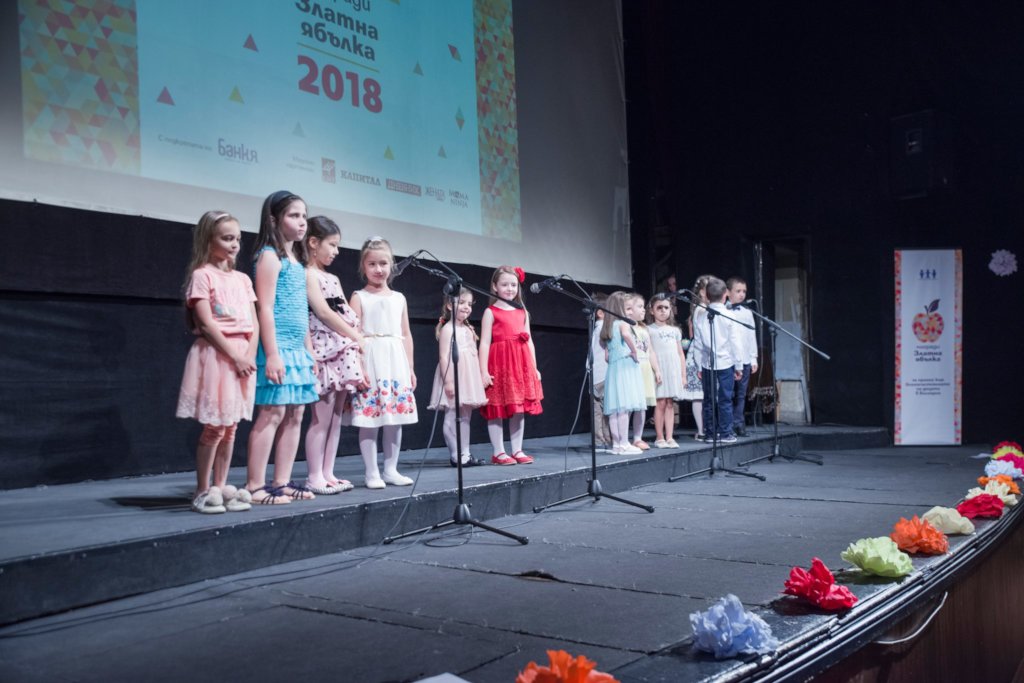 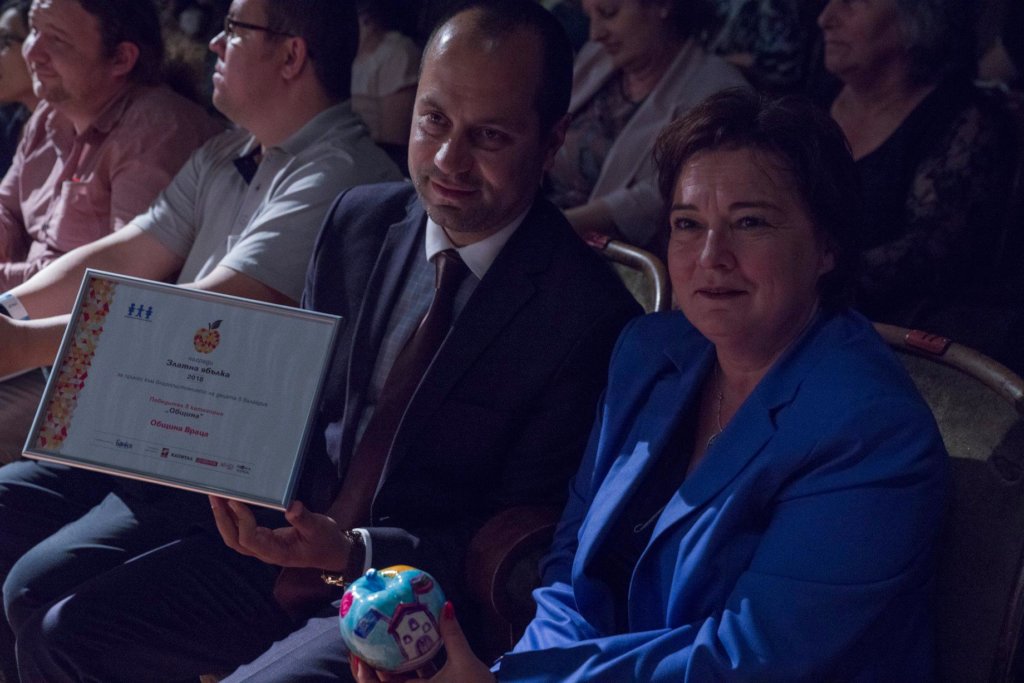 Representative of the Municipality of Vratsa 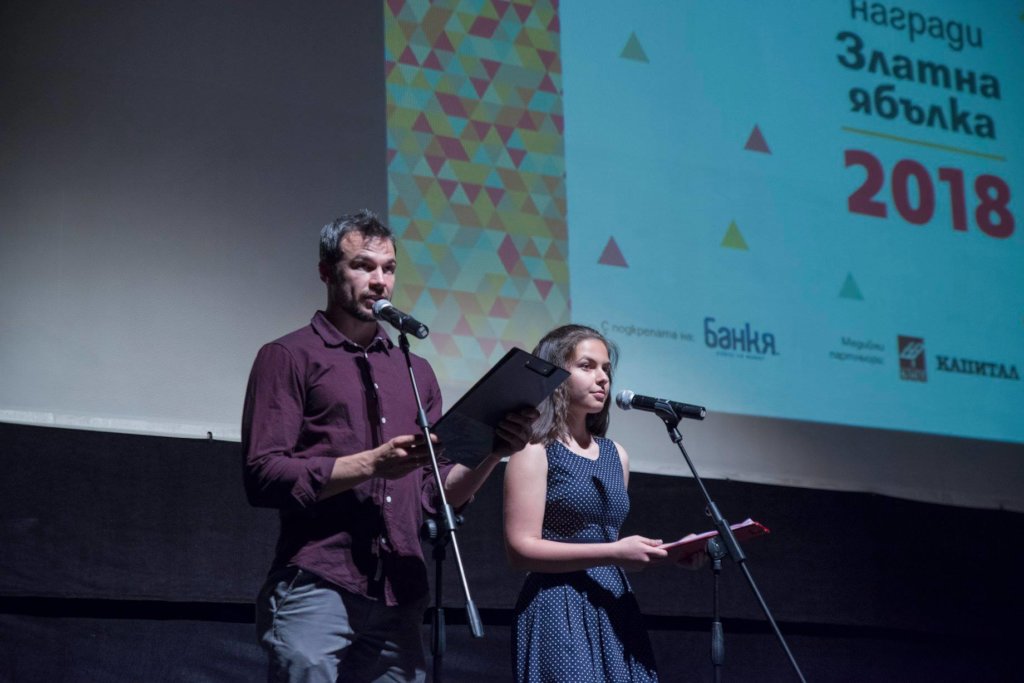 National Network for Children launched a campaign “For More Humane Juvenile Justice” with a special event in Sofia on January 21. The campaign calls the institutions to reform the child justice system, appeals for revocation of the 1958 Law on Combating Antisocial Behavior of Minors and Juveniles, insists on the closure of correctional boarding schools and introduction of modern and effective measures for dealing with children in conflict with the law, including restorative justice and preventive work with them.

The other goal of the campaign is to create an understanding in the Bulgarian society that children in conflict with the law are children at risk and most often their actions are call for help as they often have been victims of violence, harassment, neglect, life in extreme poverty.

Every year, over 10,000 children in Bulgaria are affected by the 60-years old Law. Some of these children (who often do not have the support of their family to step out of the difficult situations) are punished for offences for which, in most of the cases, adults do not face sanctions: escape from home, wandering, begging, stealing food … In fact, children are extremely vulnerable and thus they need help, but are treated as criminals and are further punished for their severe fate by imposing inadequate remedial measures or boarding in correctional schools, where they do not become better people, but on the contrary – they are often victims of violence. Household and hygiene conditions at this institutions are inhuman, worse than prisons, children are devoid of quality education and adequate medical care.

“With the campaign „For More Humane Child Justice” we call children with problematic behavior to receive social support from professionals and specialized services so that they could really change themselves and their lives for the better. Because every child deserves human attitude”, commented Georgi Bogdanov, executive director of the National Network for Children. He urged the institutions and, above all, the Ministry of Justice, to launch the reform of the child justice system, as there is a new draft bill for more than a year now and it is important for it to enter for a discussion in the Parliament. “The childhood of these 10,000 children, which the outdated 60-years old Law affects, passes. Their life cannot go back. For them every day is important and every day without reform in child justice is one day less childhood,” added Georgi Bogdanov.

The start of the campaign brought together parents, representatives of civil organizations and professionals working with children.

During the event, a game in Ludo style (“Don’t Judge Me, Man” in Bulgarian) was presented. The board game is a metaphor of the provisions in the current Law and the inhumanity of the system.

Find another project in Bulgaria or in Child Protection that needs your help.
Find a Project

GlobalGiving
Guarantee
Donate https://www.globalgiving.org/dy/cart/view/gg.html?cmd=addItem&projid=24835&rf=microdata&frequency=ONCE&amount=25
Please Note
WARNING: Javascript is currently disabled or is not available in your browser. GlobalGiving makes extensive use of Javascript and will not function properly with Javascript disabled. Please enable Javascript and refresh this page.