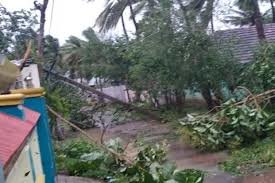 A powerful cyclone in southern India has killed at least 33 people, caused massive damage to homes and roads and drove tens of thousands of people into relief camps, nearly 82,000 people who took shelter in more than 400 state-run camps. They were evacuated from areas in the path of Cyclone Gaja, which struck six districts of Tamil Nadu state on Friday with heavy rains and winds that reached 90 kilometers (55 miles) per hour. Most deaths were caused by flooding, house collapses and electrocution

More than 80,000 residents had been evacuated from low-lying areas on the eastern coast of Tamil Nadu Those who died were mostly killed by trees uprooted by the strong winds, or collapsing roofs and walls. A three year old boy was believed to be the youngest killed, at Adiramapattinam, while a A 67-year-old retired man died when he was hit by a falling tree in Pulangudi. Schools have been shut across the state and with rough seas, fishermen have been advised not to enter the Bay of Bengal since

This project will enable them to set up shelter with help of tarpaulin cover. The cooking vessels, rice, grocery, oil will help them to restart cooking in their homes. Supply of new books and notebooks will encourage school going Children to return to studies. provide income generation to affected families

The togetherness with the cyclone affected people will encourage them to plan their house resettlement and to decide about reviving their livelihoods. Need assessment exercises will be carried out for short term interventions and for long term projects both in fishing and in rural artisan works. For, the fishing people and the tribal communities now realize that their life is often exposed to cyclone, flood or tsunami that destroyed them on December 26,2004. They are willing to revive their life

Donating through GlobalGiving is safe, secure, and easy with many payment options to choose from. View other ways to donate
VETNGO has earned this recognition on GlobalGiving:

GlobalGiving
Guarantee
Donate https://www.globalgiving.org/dy/cart/view/gg.html?cmd=addItem&projid=37160&rf=microdata&frequency=ONCE&amount=25
Please Note
WARNING: Javascript is currently disabled or is not available in your browser. GlobalGiving makes extensive use of Javascript and will not function properly with Javascript disabled. Please enable Javascript and refresh this page.