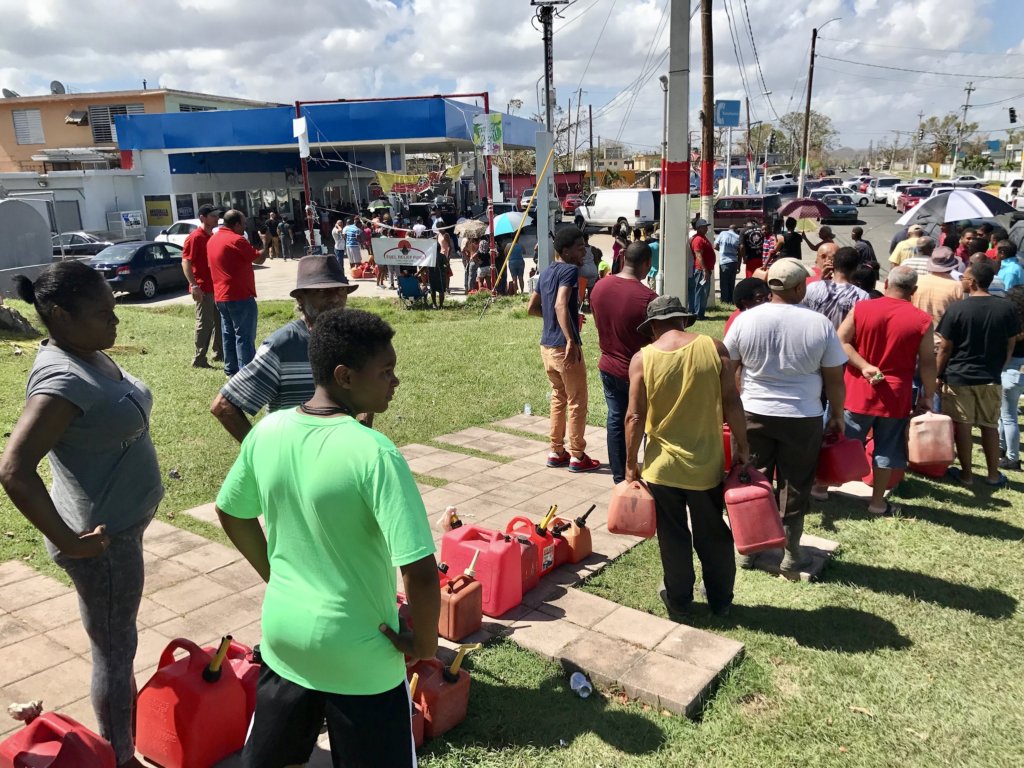 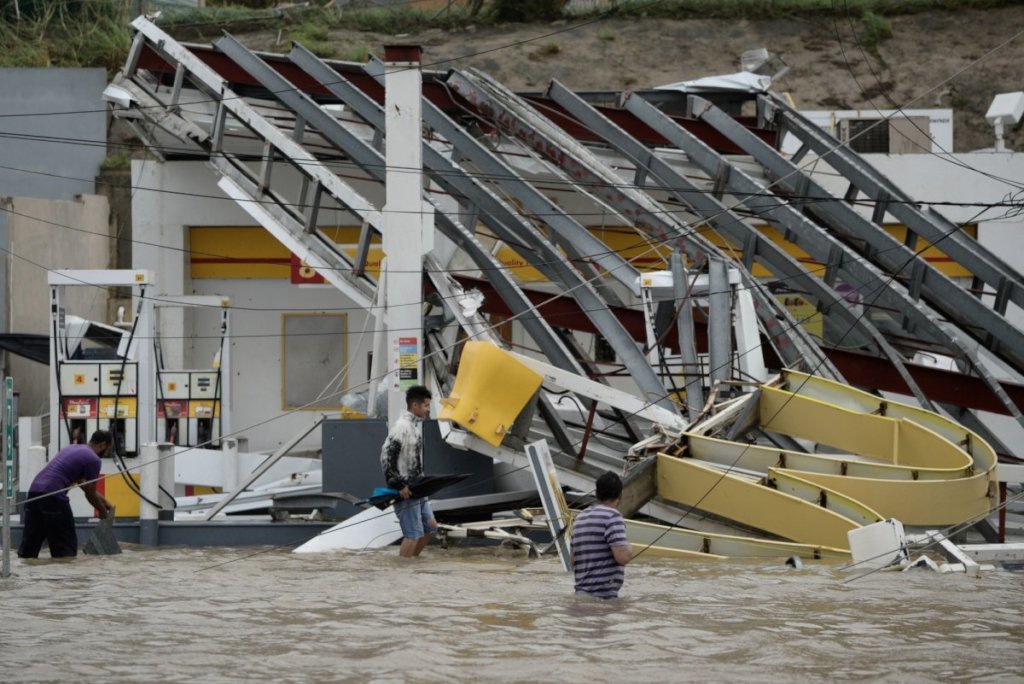 FUEL RELIEF FUND has completed its relief efforts in Puerto Rico. We have left the island with memories of incredibly resilient citizens, wonderful volunteers, and a great sense of accomplishment. But even with all the encouragement and support we received from local communities and government officials, we could not have done anything without donors like you. It was well reported that there was an urgent need for fuel in Puerto Rico and with your contributions, we were able to send 3 teams of experts to deliver fuel to those most in need.

In the aftermath of Hurricane Maria, we gave away more than $162,000 USD in fuel. This free fuel was a life-saving commodity supporting rescue workers and medical personnel in operating emergency equipment and vehicles. It enabled survivors to run generators to light their homes, power their refrigerators, and charge their phones. We provided fuel to thousands of personal vehicles so that people could seek out medical care, visit displaced family members, and travel to disaster assistance service centers to receive support.

Once more, we thank you for your trust and generosity. If you would like to continue to support us, please consider giving to the FRF Core Fund which makes it possible for Fuel Relief Fund to respond SMARTER, FASTER and STRONGER to future disasters. 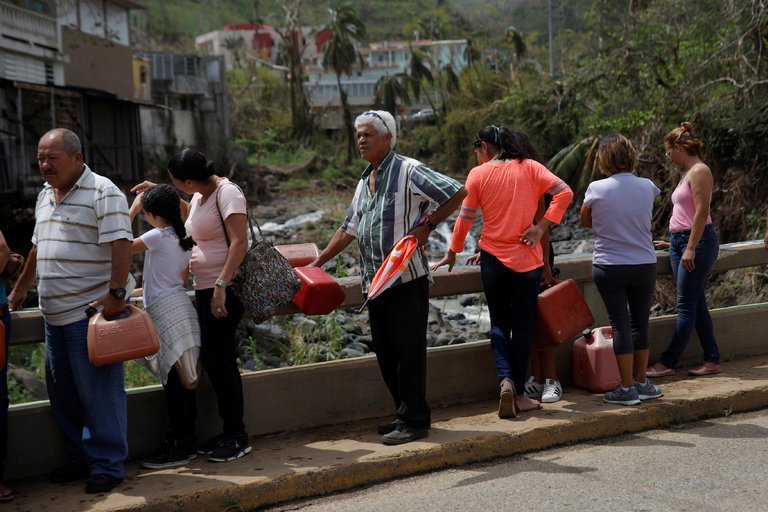 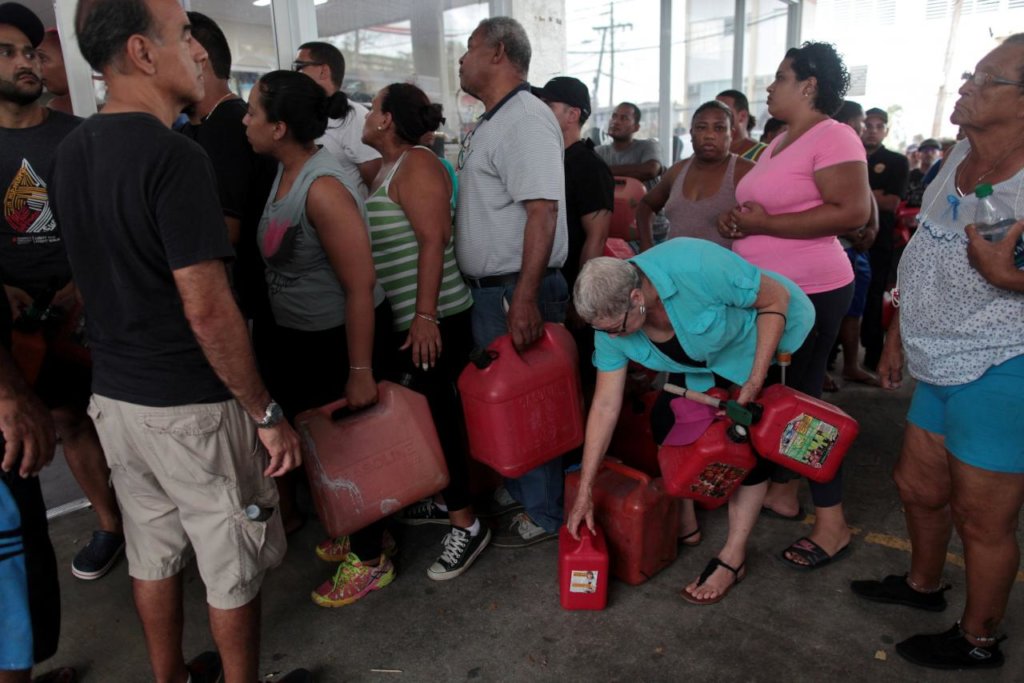 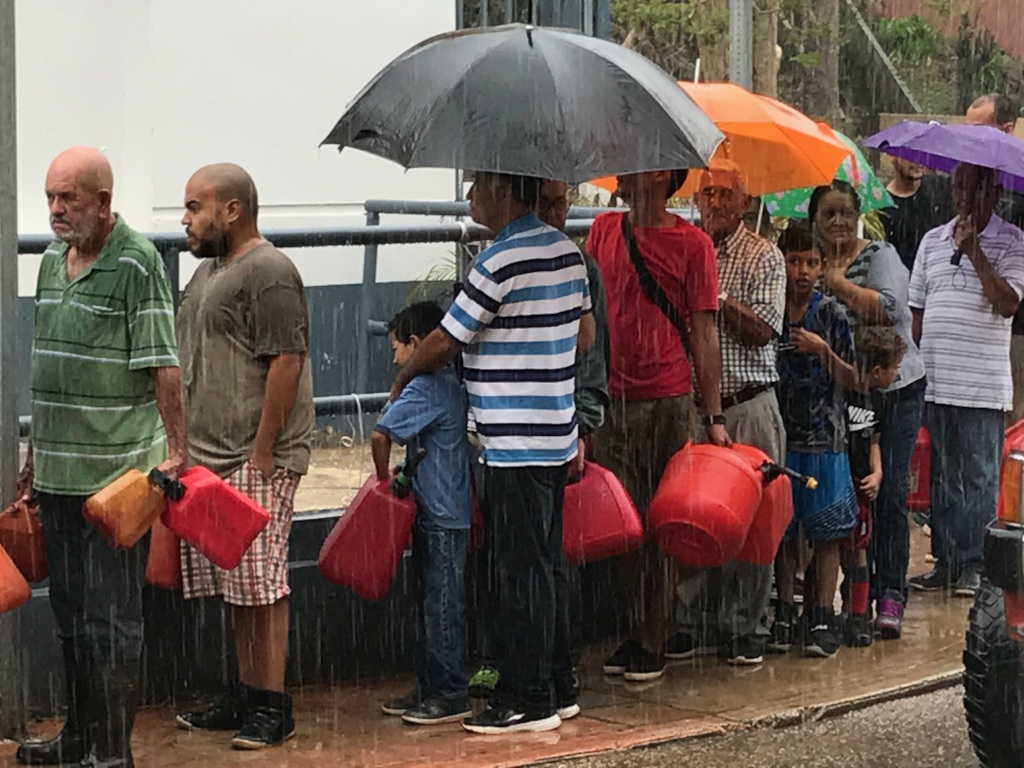 This is a choice many Puerto Ricans have had to make on a daily basis following Hurricane Maria.
The situation on the island is unprecedented. Six weeks following the devastating hurricane, the majority of people on the island still have no electricity and rely on generators to provide power. Therefore they all have to rely on FUEL. The demand for fuel is high and prices have gone up. Although more gas stations have opened, people still cannot access or afford fuel. We have received numerous requests from hospitals, dialysis clinics and elderly care facilities whose patients are running out of funds for trips for dialysis and healthcare visits or from people who cannot run their home generators long enough to meet their medical needs.
Therefore, Fuel Relief Fund has decided to make a third trip to the island! Our dedicated volunteers have arrived and are giving away free fuel today. This could not have happened without your unwavering support. THANKS for all your donations. We know we have relied heavily on your charitable gifts in the last 3 months! Please know that has enabled us to provide so much support to victims of Hurricane Harvey, Irma and Maria.
While we continue our work in Puerto Rico now, we already:
- gave away over 50,000 gallons of fuel
- helped over 40,000 people with either fuel for transportation or fuel for generators
- helped over 15 cities/municipalities (Loiza, Arecibo, Comerio, Barceloneta, Utuado, Orocovis, Ciales, Cataño, Corozal, Vieques, Humacao, Fishermen, Arecibo, Guaynabo, Barranquitas)
- worked with locally owned branded gas stations to purchase and distribute fuel (Total, Shell, Puma)
- worked and received support from local government officials (Secretary of State: Luis Gerardo Rivera Marin, Senators: Eric Correa and Jose Perez Rosa,  Representatives: Antonio Soto, Jose Gonzales Mercado and Urayoan Hernandez Alvarado and numerous mayors) most of whom even assisted by pumping fuel in jerry cans and cars.
FUEL SAVES LIVES 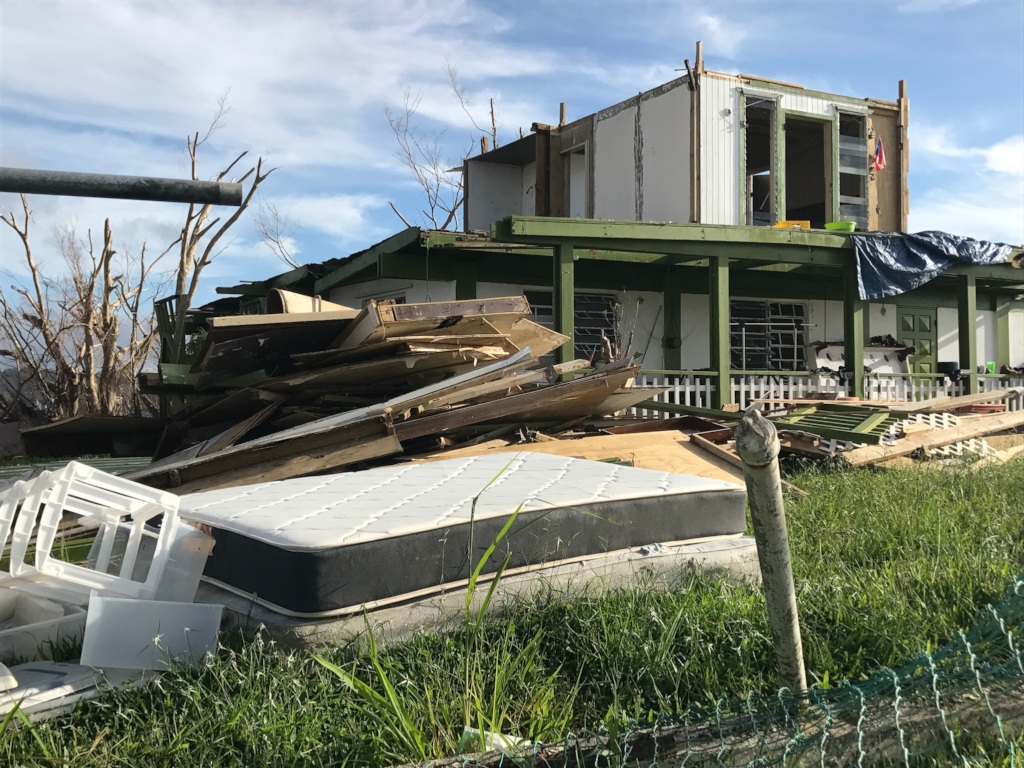 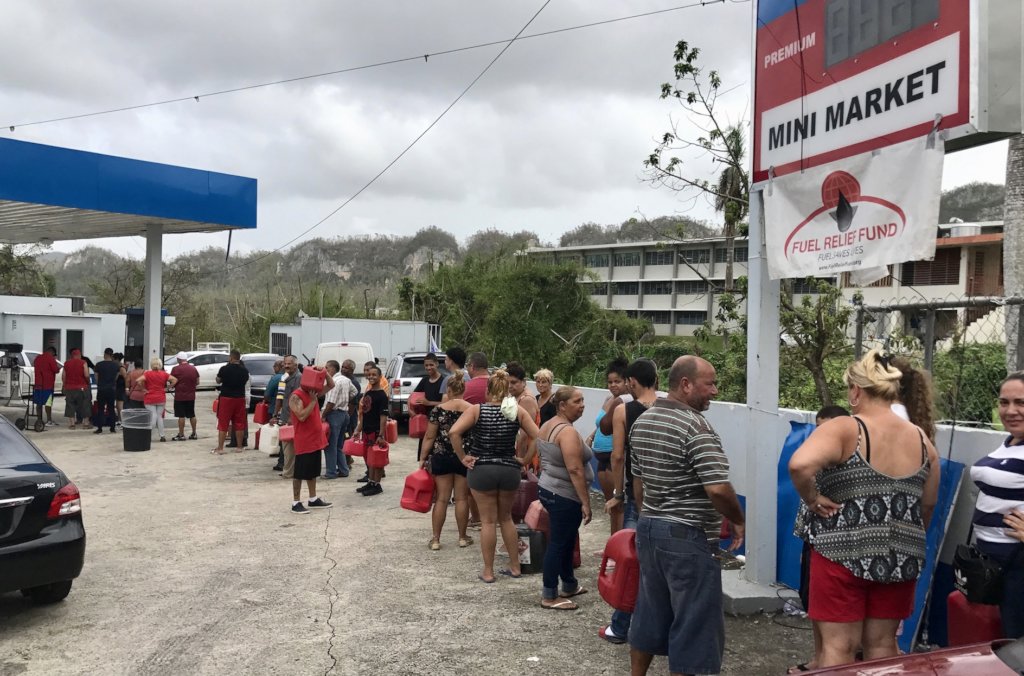 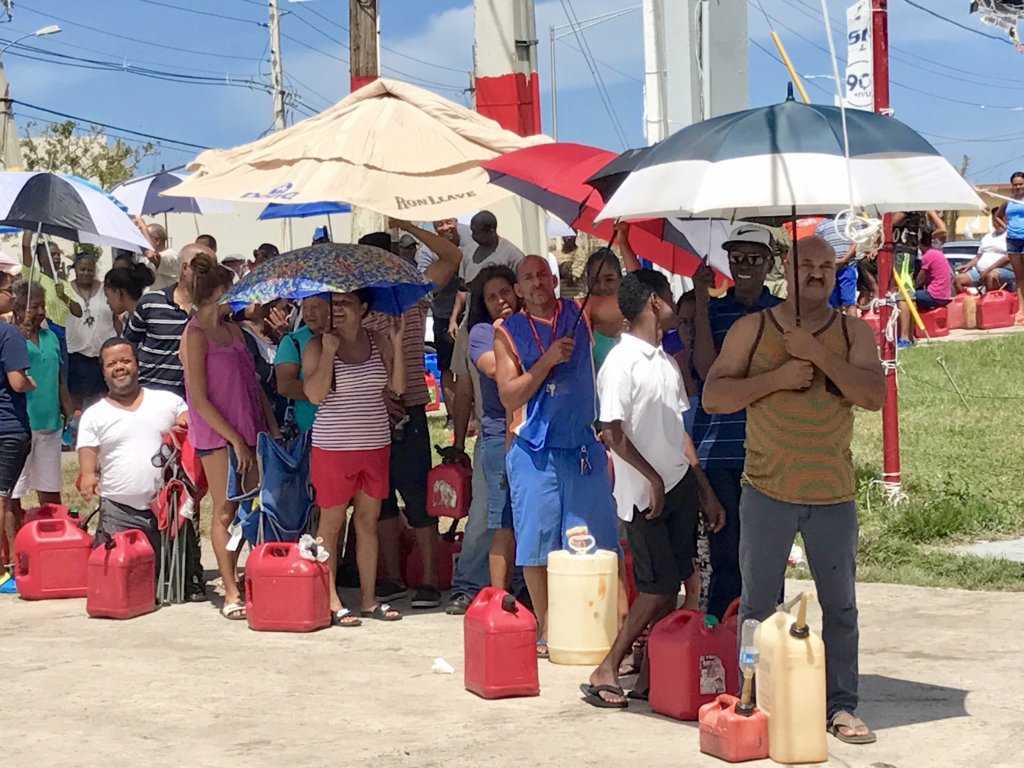 It is not always easy to explain why FUEL is so extremely important following a major disaster. You understand it.

Right now we are in Puerto Rico giving away free fuel to thousands of victims of Hurricane Maria. Fuel Relief Fund has been providing fuel for generators and vehicles in areas hardest hit by the eye of the storm (Loiza, Punta Santiago, Arecibo, Barceloneta). We also gave away diesel to several elderly care facilities in the area in order for them to run their generators. An additional team of volunteers just arrived to provide free fuel in multiple locations and thus;

PLEASE CONTINUE TO HELP US by:

THANKS AGAIN FOR YOUR CONTINUED SUPPORT. FUEL IS SAVING LIVES IN PUERTO RICO! 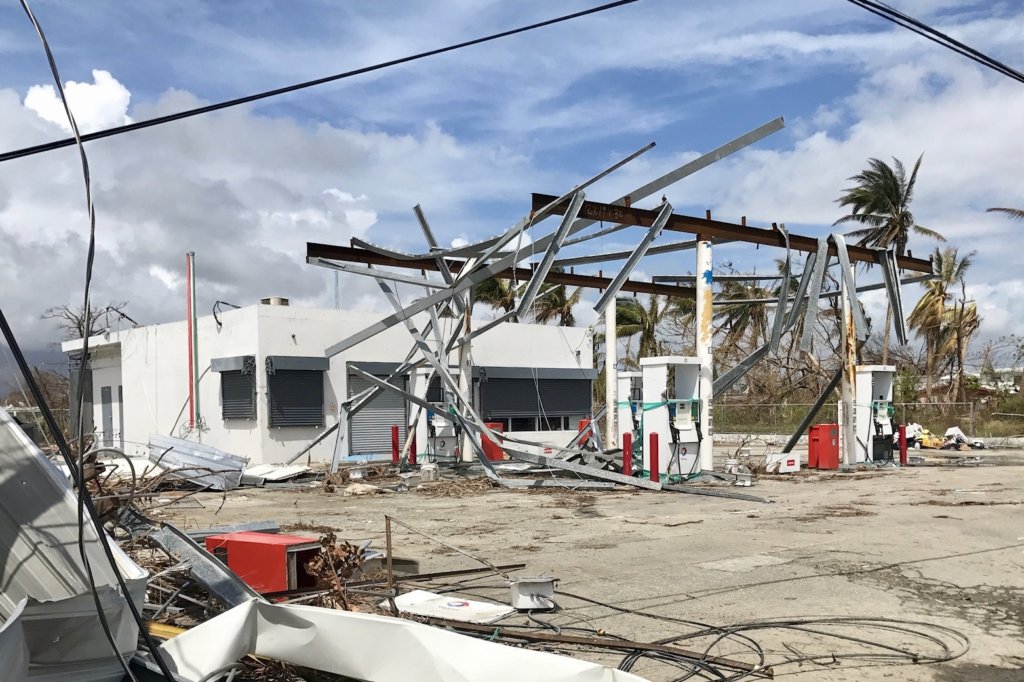 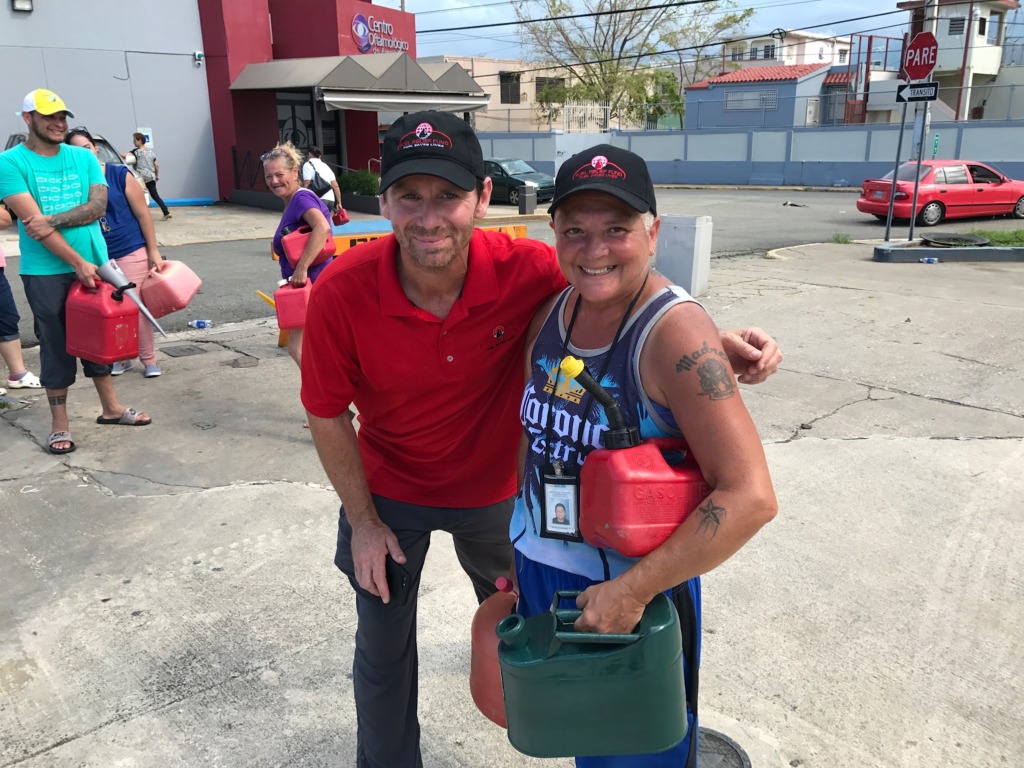 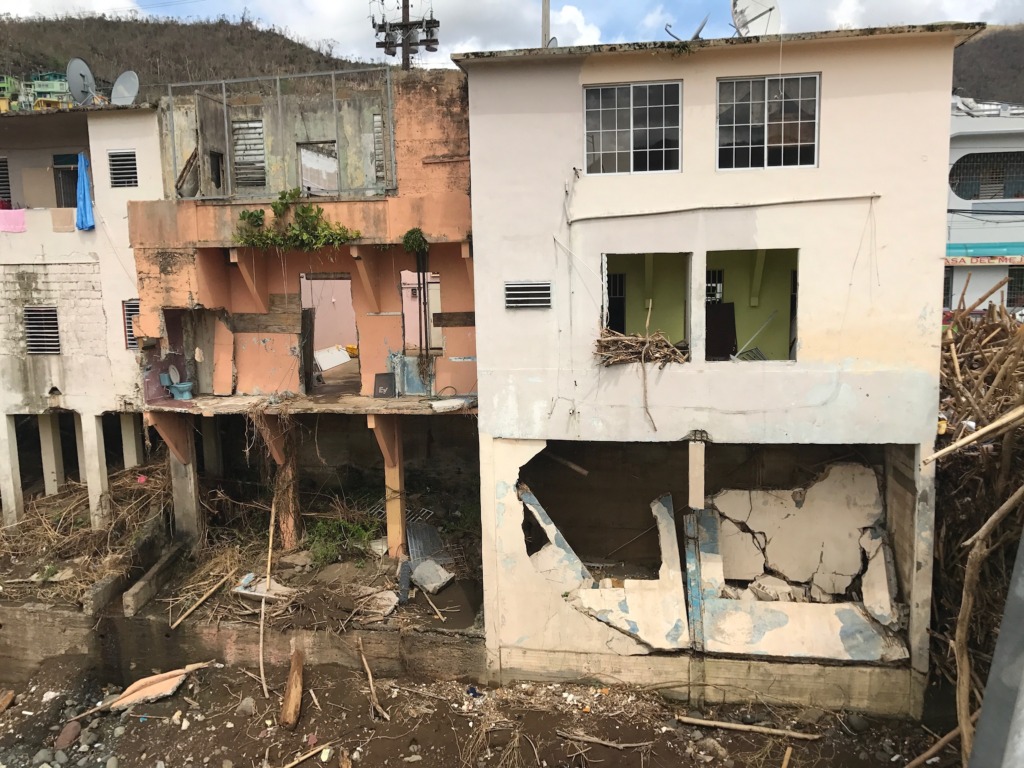 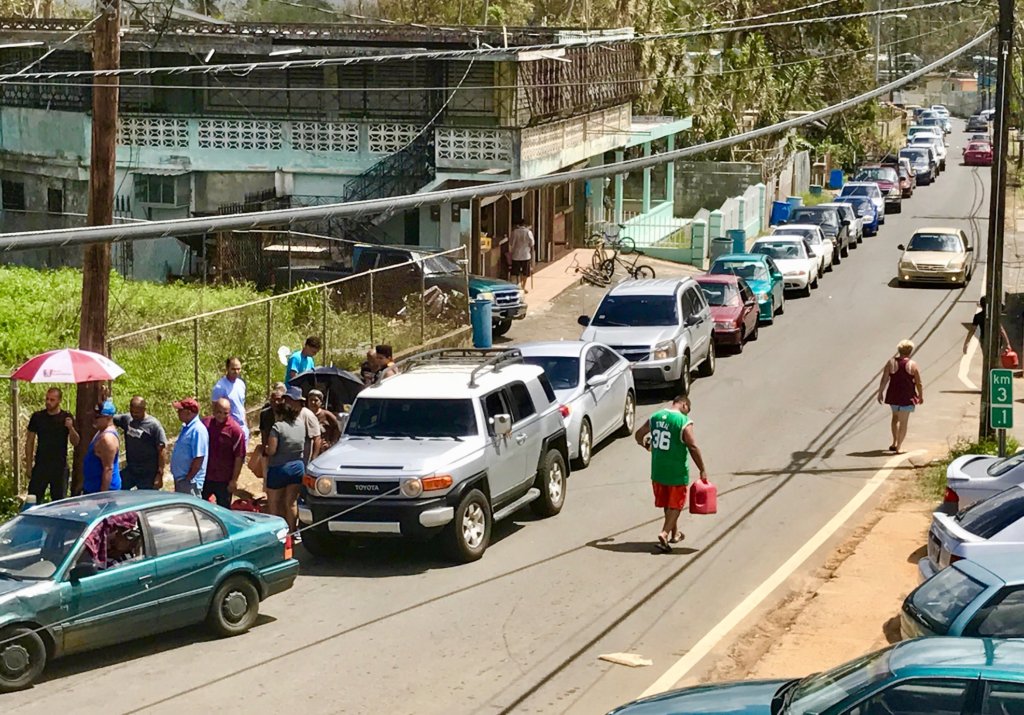 Your donations are making a difference! 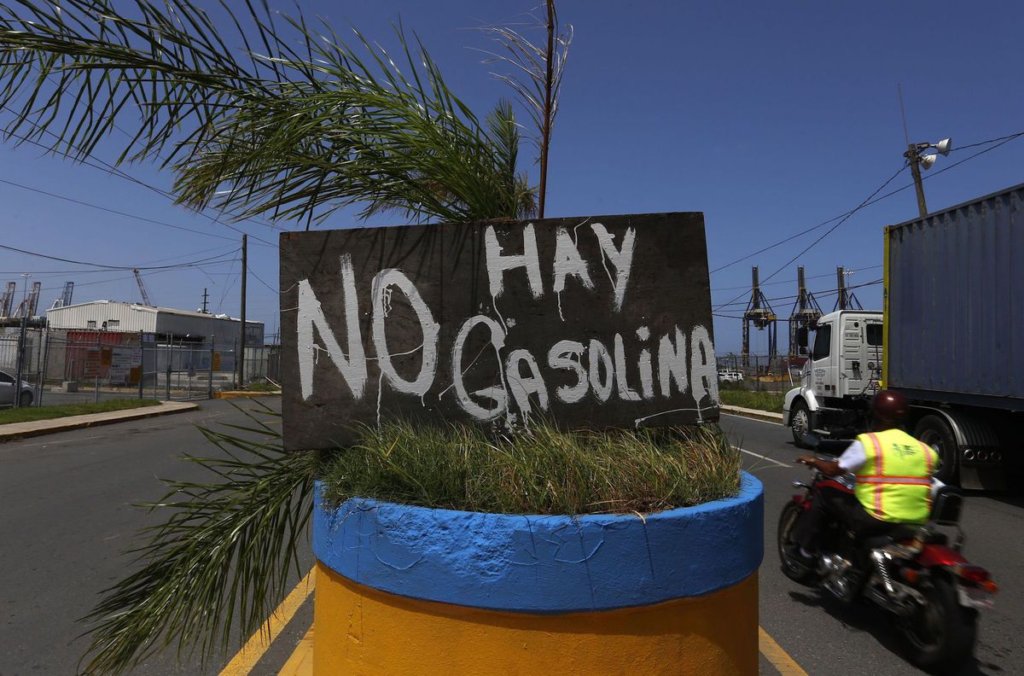 Your donations are making a difference!

Fuel Relief Fund is on the ground in Puerto Rico and working non-stop. As reported in all the major news outlets, the lack of Fuel continues to be the most pressing need. Relief supplies are at hand, but the fuel to get them to the people is not.

Most of the island is still without electrical power.  The entire grid was destroyed, so the only electrical power is coming from generators, powered by fuel.  This situation is expected to last for months, maybe even a year. The devastation is immense. People are still dying. Many have gone without any type of aid. People in some areas are drinking rain water. People with diabetes have no access to insulin. Dialysis centers have run critically low on fuel to run their generators. Fuel stations continue to run low and operate for only a few hours at a time. The lines for fuel are unbelievably long.

Fuel Relief Fund is an integral member of the Fuel Strike Team with the US Military, FEMA, and every major fuel supplier on the island. Most critical at this time is to supply fuel to municipalities, hospitals, clinics and government agencies in order to meet critical infrastructure demands.

-       Helped FEMA, the military, and the government to determine most critical fuel needs.

-       Provided logistical advice on safe and expedient transport of fuel.

-       Based on our experience in Haiti and elsewhere, focused attention on the need for generator fed light stands for the safety and security of the population

-       Worked to increase amount of tanker trucks available. Over 70 fuel tankers are being delivered by FEMA tomorrow, but it will take days for the effects to be felt.

As an integrated part of the Strike Team, Fuel Relief is now in possession of 6000 gallons of diesel for generators and a 10,000-gallon tank for deliveries.   By Tuesday, October 3, 2017, we will be in possession of a truck to pull the tank, as well as government security allowing direct deliveries to first responders, NGO’s, and the people.

This is one of the most complicated crisis we have ever responded to.

PLEASE continue to support us. Every dollar goes to procuring fuel and the logistical support to deliver it.  Nothing is spent on overhead. You cannot imagine what a difference free fuel will make to the people of Puerto Rico. 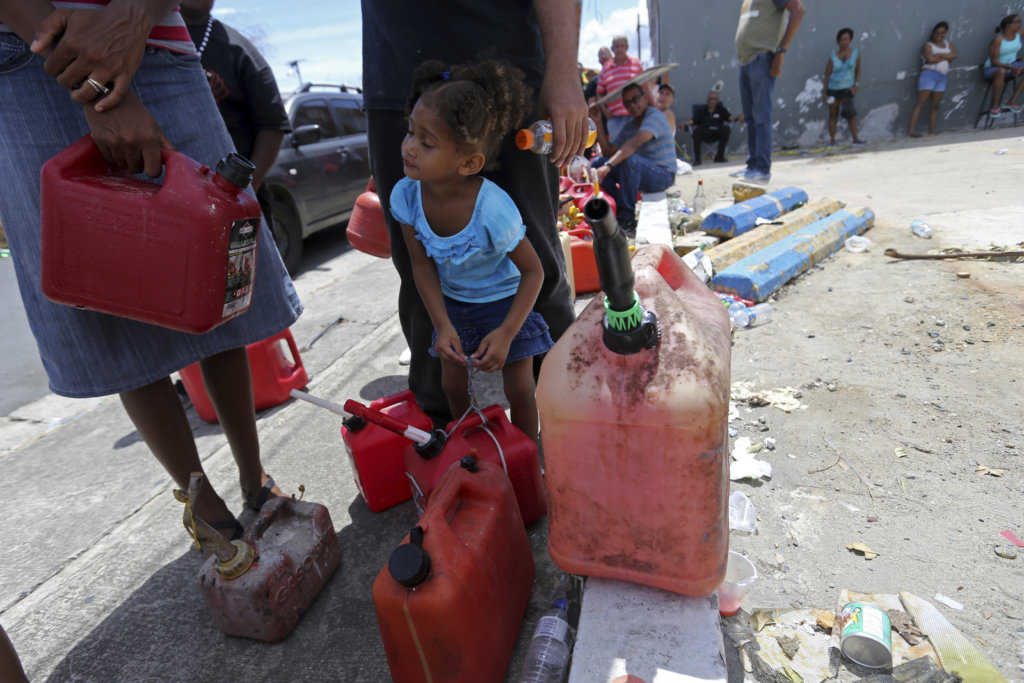 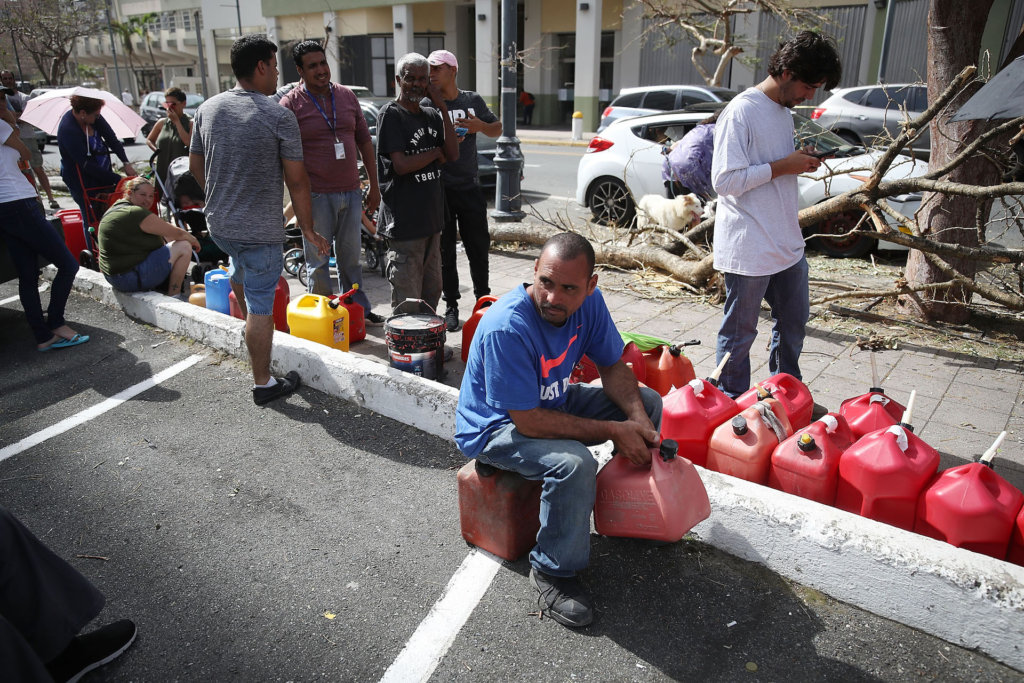 Support another project run by Fuel Relief Fund that needs your help, such as: 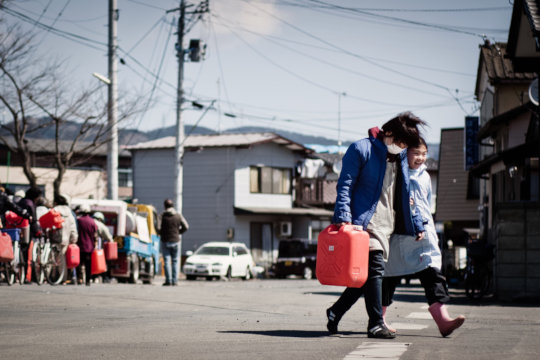 GlobalGiving
Guarantee
Donate https://www.globalgiving.org/dy/cart/view/gg.html?cmd=addItem&projid=29859&rf=microdata&frequency=ONCE&amount=25
Please Note
WARNING: Javascript is currently disabled or is not available in your browser. GlobalGiving makes extensive use of Javascript and will not function properly with Javascript disabled. Please enable Javascript and refresh this page.