by Labour Behind the Label Trust 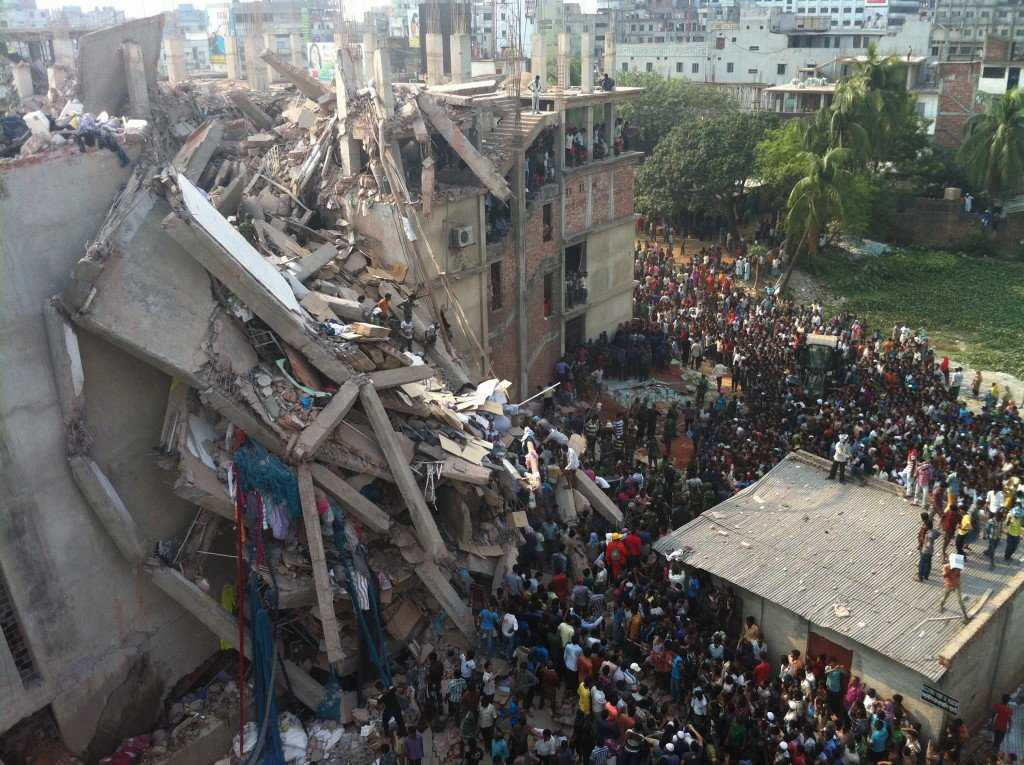 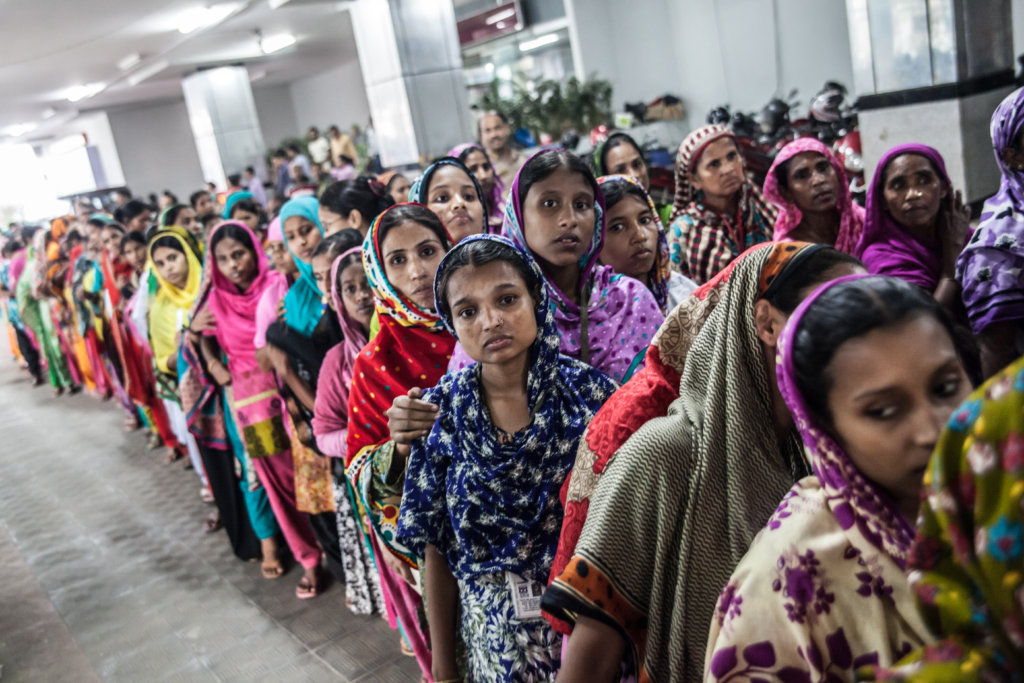 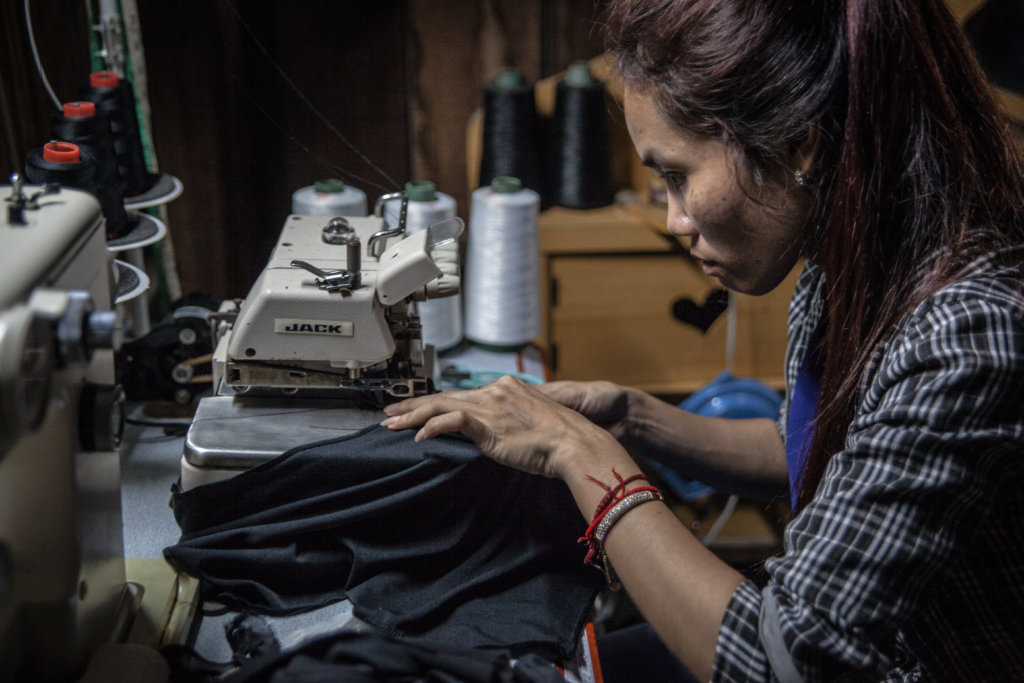 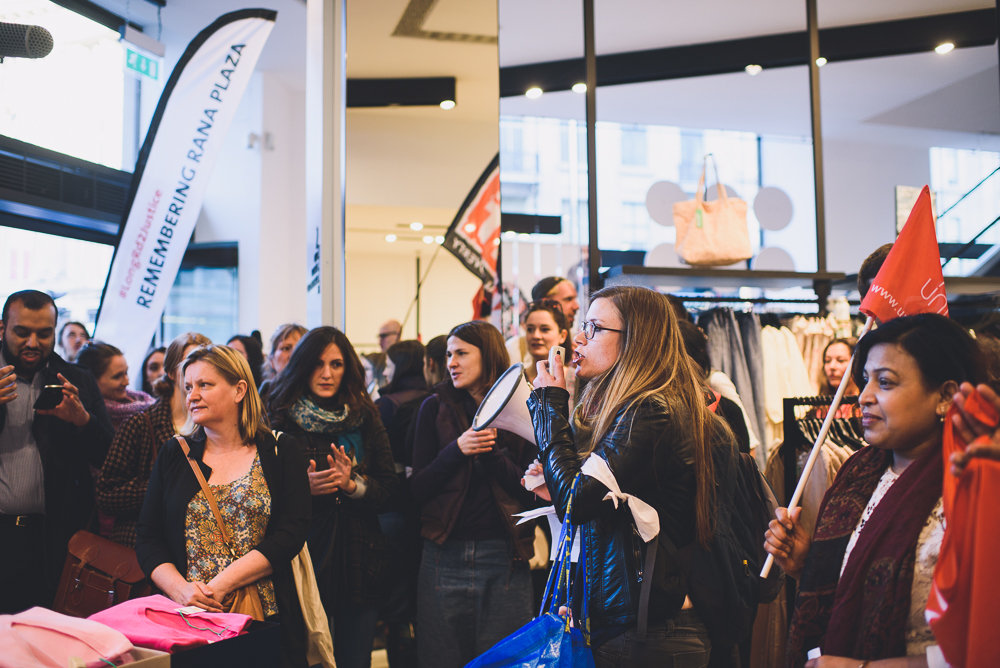 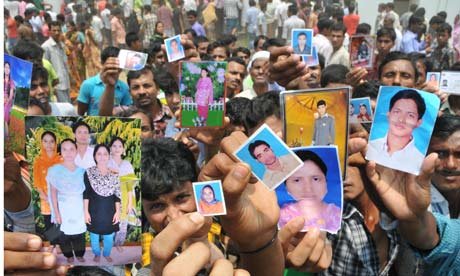 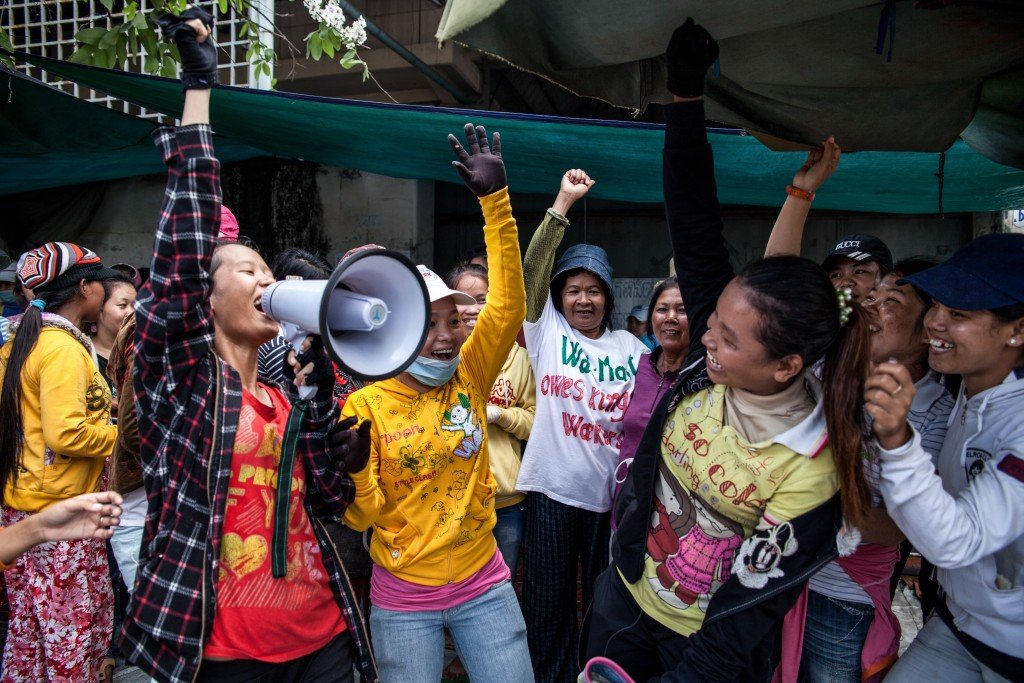 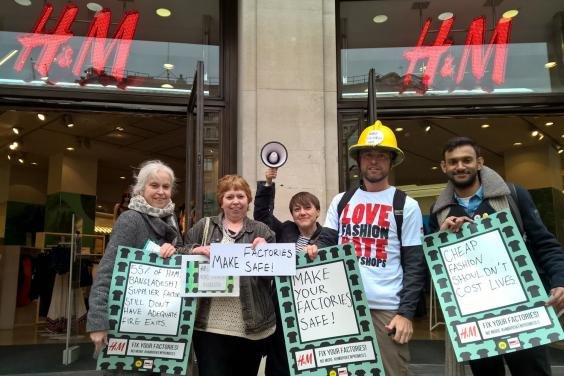 Thank you! And please keep in touch...

By Caroline Lewis - Fundraiser and Coordinator

A huge thank you to every single one you for supporting our transparency work ever since it became a priority campaign of ours in 2016. Together we raised an amazing total of £4,857 through this online appeal. This went towards a whole host of activities and we really couldn’t have done what we achieved without you and your support. Thank you.

Here’s a roundup of what we achieved:

If you would like to continue to donate to Labour Behind the Label there are a number of ways you can do this.

-> Support our brand new online appeal where we are seeking funds to expose the UK garment industry and find out what workers need in order to ensure decent wages and safe factories.

-> Support our Urgent Appeal crowdfunder. An Urgent Appeal is a rapid response to a request for support from workers in the garment industry whose rights are being infringed. Urgent Appeals are a core part of what we do and what sets us apart from other groups working on similar issues.

Thank you for all your support and we hope you will go on to support us with other worthwhile campaigns.

By Caroline Lewis - Director of Fundraising

Thanks to your efforts, Primark caved to public pressure and disclosed a list of where its factories are! Well done you.

Close to 70,000 signatures were presented to Primark, including 10k+ from our #StepUp petition. Your demands, alongside other Clean Clothes Campaign activists around Europe, were presented at Primark stores in a number of cities earlier this year, in gift-wrapped golden boxes suggesting that Primark add transparency to its new years' resolutions.

We're delighted that Primark has now responded to this demand. Campaigning works. This data will be useful for workers' in factories around the world struggling to uphold their rights and keep brands accountable.

It’s a huge step in the right direction but there’s still a long way to go yet.

In other news around transparency, on March 20 LBL attended the Big Tent on transaprency in Brussels. Organised by the International Corporate Accounability Roundable and the Clean Clothes Campaign organisations working on transparency were brought together to foster new connections and to learn about the various approaches being taken to promote supply chain transaprency.

By Nicola Round - Director of Campaigns 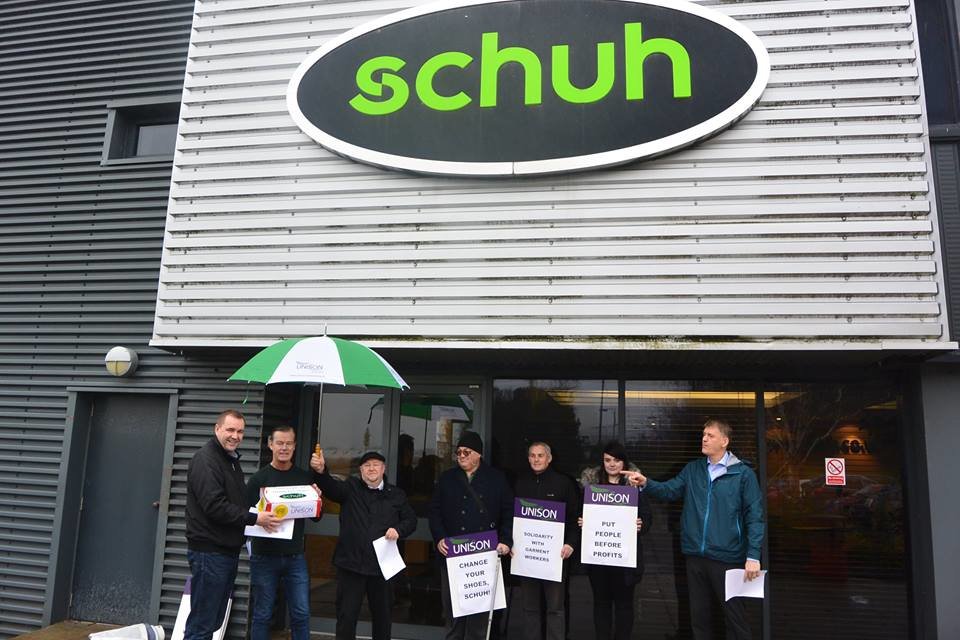 13,606 people have called for leading UK shoe brands and retailers to step up and tell us who made our shoes, and to stop endangering the lives of the people who make them.

The petition, organised by Labour Behind the Label and the Change Your Shoes coalition, was delivered to 11 brands in the UK and 15 brands across Europe in December, on behalf of thousands of citizens who want to know that their shoes are made by people who do not risk their lives when they go to work each day.

In London, Debenhams received our petition and said they are on track to publish their supplier list online this year. This is a welcome step towards greater accountability and we look forward to meeting them again soon. In Livingston, UNISON Scotland handed the petition to Schuh who said they are open to our recommendations. In Manchester we were joined by local group Stitched Up to hand the petition to Boohoo.com, who have so far not provided an adequate response to the concerns raised in the petition. Harvey Nichols in London also received our petition and we look forward to further discussions with them.

We were disappointed that Office Shoes declined to receive the petition in person, and have so far failed to respond to the campaign despite letters, emails, phone calls and a personal visit from campaigners. We are concerned that a leading brand appears to be actively ignoring questions from a growing number of citizens about the conditions in which their shoes are made. We will continue to try and speak to Office about their supply chain and about steps they can take to identify risks and protect workers’ safety and rights.

The petition has also been sent to Asda, Boden, Dr Martens, Sports Direct, Primark and Very.co.uk. Boden and Dr Martens have replied to our original letter, but we are awaiting a full response from the other brands.

The growing movement for transparency cannot be ignored. A parallel petition which LBL is also involved in calls on global garment brands to be more transparent, including Primark, and has received over 70,000 signatures.

As a result of public pressure, major brands have this year committed to publishing supplier information, including Clarks in the UK who responded positively to an earlier letter from us about the need for greater transparency. Many brands are still not keen to talk about working conditions, and there is still a long way to go until workers in the shoe industry get a fair deal. But it’s promising that some big brands are now waking up and see that the only way forward is to listen to customers’ concerns and workers’ needs, and show they are willing to be held accountable. We will continue to work with shoe brands to improve supply chain transparency and working conditions, to stop workers risking their lives for poverty wages every day to make our shoes. 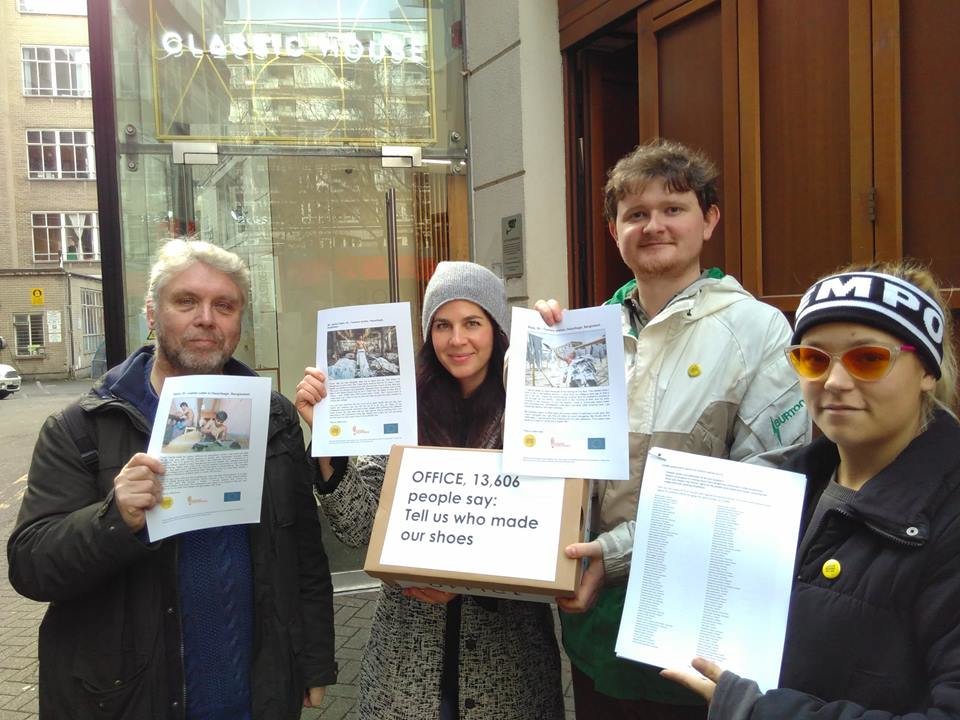 Campaigners outside Office Shoes in London 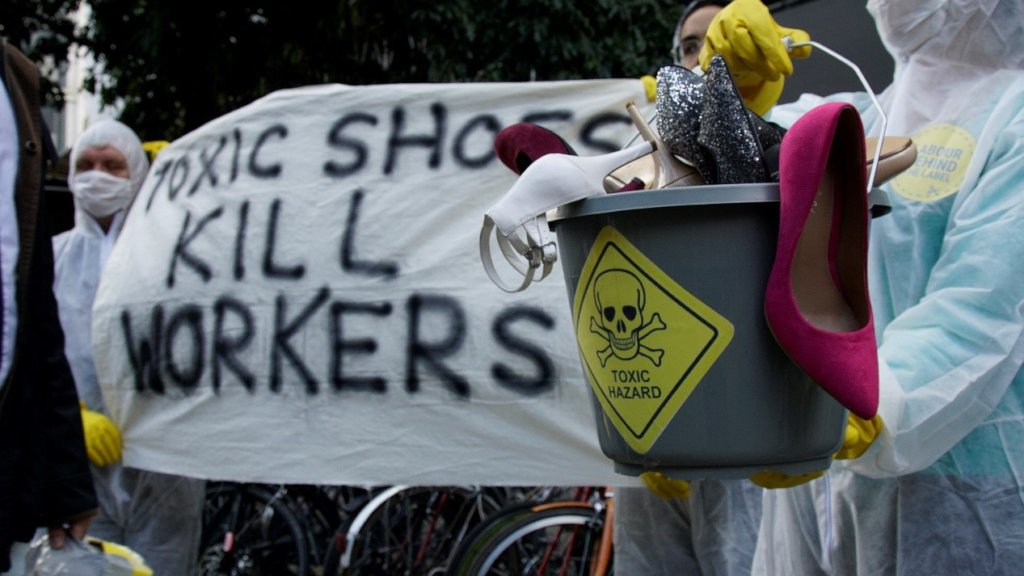 Throughout the autumn we have continued to write to leading UK shoe brands – and major retailers - with our demands to publish names and addresses of their suppliers, and to stop using dangerous chemicals in shoe production.

An amazing 13,606 people signed our petition calling on brands to Step Up, showing brands and policymakers that there is a growing movement for change.Some brands have been more responsive than others. We’re really pleased that Clarks have now committed to publishing their supplier list. Other leading brands including Arcadia (Topshop), Next, New Look and Pentland Brands Ltd have also agreed to publish supply chain information. And retail giant ASOS have recently published their supplier list online. This is an important step forward for workers’ rights, and we’ll continue to work with brands and workers’ organisations to improve transparency and ensure fair and safe conditions for the people who make our shoes and clothes.

This autumn LBL activists have been out on the streets raising their voices for workers in the shoe industry. On 18 September, activists were at London Fashion Week calling for an end to Killer Heels. They want shoe brands to stop using toxic chemicals in leather tanning which cause lung cancer, blindness, asthma, skin ulcers, nose bleeds, fevers, headaches, and eczema, and pollute rivers and soil. So, they went to get the attention of the industry at their biggest event of the year, and ask them to put an end to toxic shoe production.

Watch our video and find out more at: labourbehindthelabel.org/watch-killer-heels-at-london-fashion-week

On 7 October, activists were out speaking to shoppers in Manchester, Bristol, London, and Exeter. 17 activists took action across these four cities, speaking to shoppers and asking them to sign our petition. Activists also went to speak to store managers in nine different stores (of Office, Harvey Nichols, Schuh and Sports Direct), asked them to pass their concerns about working conditions to head office and tell them we want to know who made our shoes.

We are planning more events in November – passing along the names of all the thousands of people who signed our petition to a selected few brands who have not been responsive! More news to follow.

In addition, our campaign network Change Your Shoes will be publishing new reports on working conditions in India and on some initiatives we think are positive examples of better practice in the shoe industry. 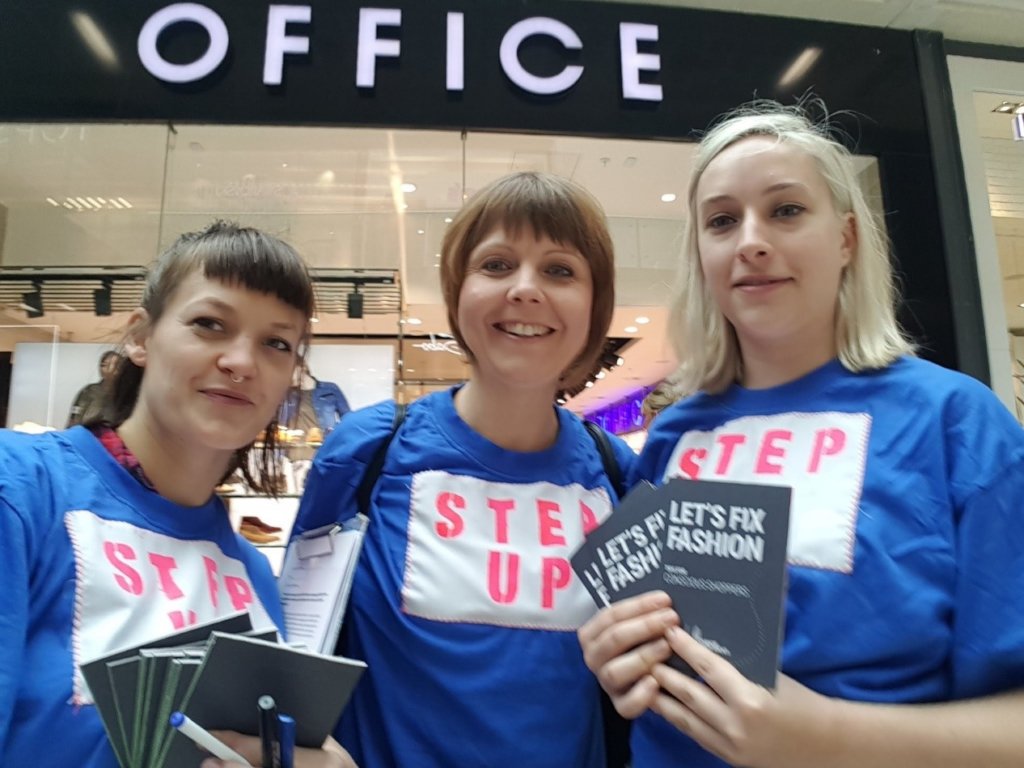 By Caroline Lewis - Director of Fundraising 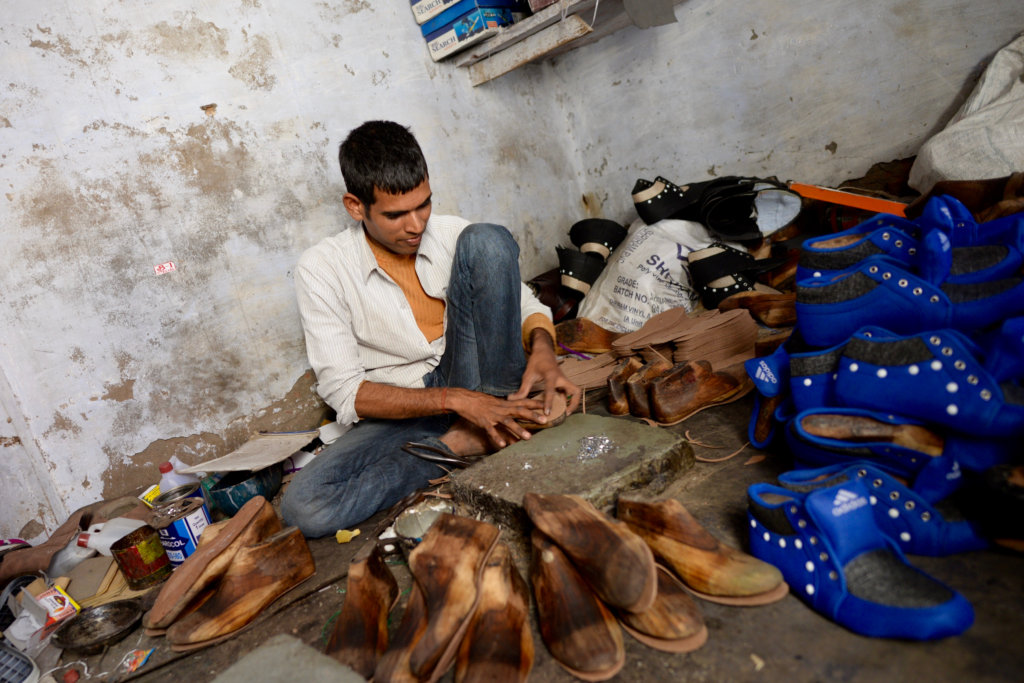 Since we launched our petition in May we have had a huge response with over 6,300 people signing so far, to ask shoe and clothing brands to publish their suppliers and take responsibility for working conditions.

Have you signed yet? Visit http://labourbehindthelabel.org/get-involved/take-action/ to take action. And please remember to share the petition too.

We've been keeping the pressure on the brands, and sharing the campaign on social media to raise awareness and encourage more people to take action. Some of the brands don't want to talk to us, but we're organising meetings with others to talk to them about how they can improve. Our goal is to get more brands to commit to greater transparency, less reliance on toxic chemicals and to respect the rights of workers.

What do these latest commitments to transparency actually look like? Well, here's an example from ASOS who have recently published their sourcing map:

and factory list, which they have committed to updating every two months:

Our big news is that we're planning a double day of action in October before the petition closes. On 6 and 7 October supporters, activists and shoppers around the country will be getting involved in actions at shoe and clothing stores. You can get involved! Sign up to our mailing list at http://labourbehindthelabel.net/newsletter-sign-up/ to hear more over the coming weeks. 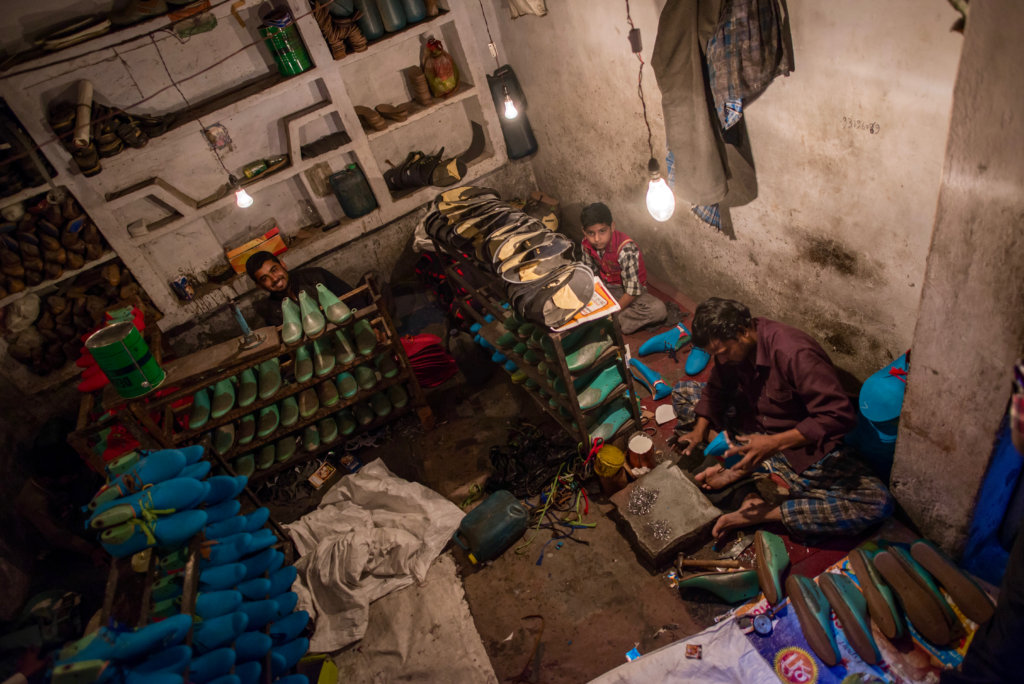 Labour Behind the Label Trust

GlobalGiving
Guarantee
Donate https://www.globalgiving.org/dy/cart/view/gg.html?cmd=addItem&projid=25484&rf=microdata&frequency=ONCE&amount=25
Please Note
WARNING: Javascript is currently disabled or is not available in your browser. GlobalGiving makes extensive use of Javascript and will not function properly with Javascript disabled. Please enable Javascript and refresh this page.