by Global Fund for Women 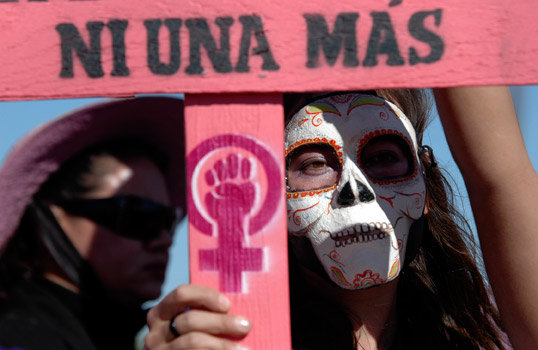 By Amelia Wu - Director, Philanthropic Partnerships
As mentioned in our last update, the Global Fund for Women has created a $50,000 “Action Fund” as part of the GFW-MAC Ciudad Juarez Initiative. The purpose of this fund is to provide grants that are time-bound and awarded for specific activities intended to address violence against women’s rights activists in the context of Ciudad Juarez. These grants demonstrate the GFW-MAC Initiative’s responsiveness to the critical needs of women’s rights organizations to ensure the safety and collective action of their activists and the movements they represent.
This $50,000 Action Fund seeks to:

Through this fund, we recently awarded a grant to Justicia para Nuestras Hijas A.C. [Justice for Our Daughters, Civil Association]. This organization is comprised of family members of women who disappeared or were murdered in Cuidad Juárez and Chihuahua. The mission of the group is to locate women and girls who were disappeared or murdered in Chihuahua, and to promote access to justice for the survivors and their families. Justicia para Nuestras Hijas envisions transforming the state of Chihuahua into a place where women and girls enjoy their rights fully and are able to live safely, and where the right to the truth and to justice are a reality for victims of femicide and forced disappearance. The group will use its recent grant to support its internal efforts to protect the group's staff and beneficiaries. Specifically, this will include installing a security monitoring system in the office and protecting individuals and sensitive documentation.

This year, the Global Fund for Women awarded grants totaling $300,000 to five women-led, grassroots organizations advancing women’s right to live free from violence in Ciudad Juarez and surrounding areas. Our grantee partners report that the situation continues to be dire, with over 300 killings this year. As noted in our last report, the six organizations that we have supported through this project include:

Since our last report, we have also created an “Action Fund” of $50,000 to provide financial support to time-bound, specific activities intended to address violence that is specifically targeting women’s rights activists working in Ciudad Juarez. We have been in regular communication with our grantee partners to discuss potential uses for this fund. Some ideas include a campaign for the protection of women’s rights defenders in Juarez and a security system for one organization’s office to protect them against violence that is being threatened against them.

In addition to providing flexible, general support grants which make the work of these activists possible, we also provide support through linking, referring, and leveraging additional funding sources for their programs and operations. The Global Fund for Women is currently working with a cohort of funders that includes the Fund for Non-Violence, IDEX, AJWS, and Angelica (a Mexican funder) to respond to emergency needs around violence against women in Mexico. The goal is to create a mechanism that is more strategic so that funders can respond to the needs of local activists. We are coordinating with these peers to make sure that the needs of local groups are funded by leveraging each other’s resources and referring groups we cannot fully fund. In addition, we are providing technical assistance to Urgent Action Fund/Latin America & Caribbean ensuring that they are at the table at key venues focused on human rights defenders as they become established as an essential emergency human right funder for the region. With our grantee partners, we also discussed connecting them to Front Line, an organization that protects human rights defenders.

Thank you for your generous support!

Femicide has been a persistent serious problem in Ciudad Juárez for many years. Victims as young as six years old have been raped and tortured, murdered, and abandoned, and hundreds have simply vanished. The targets of this violence tend to share certain characteristics in common: most are young women with indigenous features that mark them as “outsiders” to Ciudad Juárez (i.e. from southern Mexico or other regions of Mexico’s interior). Poverty, isolation, and work shifts that end at odd hours of the morning make them easy targets of violence. Despite the disappearances and murders of an official estimate of more than 500 women, Mexican authorities have made very few inroads in solving the murders and ensuring both justice and future safety for women in this area.

Since 1993, the Global Fund for Women has supported women in Ciudad Juárez and Chihuahua, Mexico who are responding to the horrific acts of sexual assault, torture, and femicide that have been committed. The pattern of violence against women and impunity is complex in nature and involves many different forms of crimes and perpetrators, with widespread institutional failings to prevent and punish those really responsible. Consequently, women’s organizations have responded to the situation using sophisticated, multi-faceted strategies. Around Mexico, in the United States and elsewhere, women’s rights activists are mobilizing to stop the beatings, rapes, and murders of women in Juárez. Women’s groups are challenging governments on both sides of the U.S.-Mexico border to conduct serious, professional investigations into the murders. They have carried out marches, demonstrations, vigils, and letter writing campaigns to educate people about the problem and foster solidarity with the women of Juárez. Many are connecting issues of NAFTA’s free trade model with the social and physical violence in the city. The situation in Ciudad Juárez remains serious with at least 40 reported cases of women murdered last year and continuing impunity, particularly for past cases. As a result, the Global Fund for Women continues to support and align with groups in Ciudad Juárez in their efforts to address the larger issue of gender-based violence in Mexico.

Casa Amiga is a non-profit organization and a crisis center founded in 1999 by an interdisciplinary group of professionals dedicated to addressing gender violence and fighting for the rights of women in unequal economic, social, political, ethnic and religious situations. The group offers women tools to stop the circle of violence and restore their empowerment by enabling them to recognize and defend their sexual and reproductive rights. Through its crisis center, the group offers professional services to women and children survivors of all types of violence, the first of its kind in the entire Mexican side of the Mexico-U.S. border region.

Centro de Derechos Humanos de las Mujeres [Centre for Women’s Human Rights] carries out legal representation on behalf of several families in Ciudad Juárez and the city of Chihuahua, whose daughters have disappeared and/or assassinated.  The Centre is also involved in education and advocacy work with the municipal, state and federal governments, the United Nations, and the OAS. It also carries out media work, political mobilization and psychosocial accompaniment to some of the families of the victims.  While there are other organizations in Ciudad Juárez doing similar work, what sets the Centre apart is its in-house capacity to concretely address the impunity that perpetrators enjoy by bringing forward legal cases.

Justicia para Nuestras Hijas A.C. [Justice for Our Daughters, Civil Association] (Justicia) seeks to locate women and girls who disappeared or were murdered in Chihuahua, and to promote access to justice for the survivors and their families.  Since 2002, Justicia has carried out 35 investigations, litigated 4 judicial processes against alleged murderers, presented 3 cases before the Inter-American Commission on Human Rights, and achieved 6 convictions. As a result of the group’s work, 13 forcibly disappeared women have been located alive. Currently, the group is working to provide legal support, psycho-social support, and new investigative technology for the family members of disappeared and/or murdered women.

Sin Violencia A.C. [Civil Association “Without Violence”] is a civil organization in favor of non-violence that does interdisciplinary actions through prevention programs, attention and intervention to women, children, and adolescents. It aims to facilitate processes of empowerment that promote healthy and respectful relationships between people. The group focuses on providing services in a humane, professional, and multidisciplinary manner to families that surpass and survive in the state of Chihuahua.

Madres en Busca de Justicia [Mothers in Search of Justice] (Madres) works to prevent femicide and forcible disappearance through a program called Mi Escuela, Mi Entorno, y Porque Te Amo (“My School, My Environment, and Because I Love You”).  As part of the Te Amo Project, mothers of forcibly disappeared women provide trainings at secondary schools, teaching students 8 rules that they feel are essential to avoid future disappearances and deaths.  The group is almost entirely volunteer-based, with approximately 20 volunteers currently involved with the project.

Support another project run by Global Fund for Women that needs your help, such as: 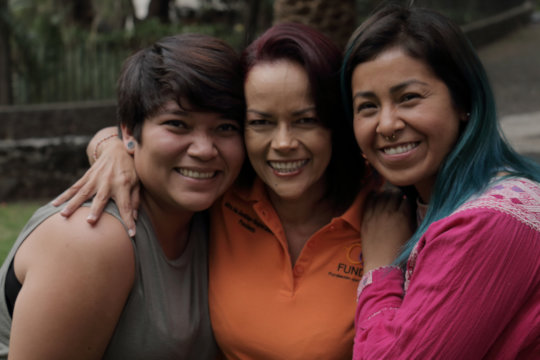 GlobalGiving
Guarantee
Donate https://www.globalgiving.org/dy/cart/view/gg.html?cmd=addItem&projid=6495&rf=microdata&frequency=ONCE&amount=25
Please Note
WARNING: Javascript is currently disabled or is not available in your browser. GlobalGiving makes extensive use of Javascript and will not function properly with Javascript disabled. Please enable Javascript and refresh this page.