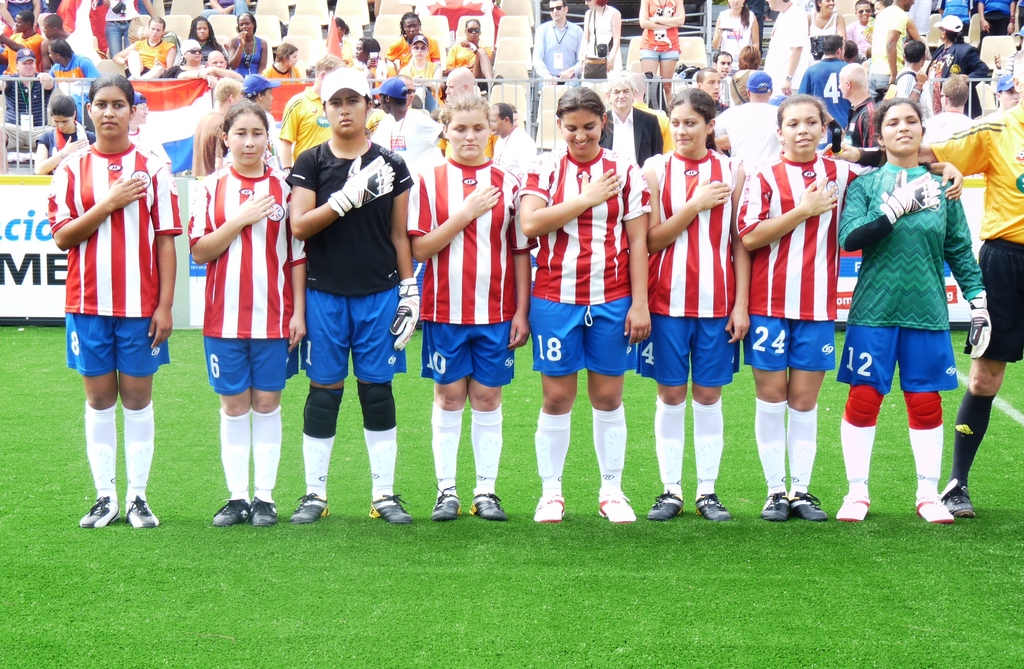 Eight girls from the school traveled to Paris, France from August 21-August 28, 2011 to participate in the Homeless World Cup of Football (Soccer), during which homeless and socially marginalized youth from 64 nations across the world united for seven days of gritty, fast paced street soccer. This represented an opportunity for the girls to wear their national colors with pride, and find acceptance, understanding, and encouragement on the world stage through sports and team work.

We are so proud of how our girls represented the school, and moreover the nation, with their composure, great sportsmanship, and respect for themselves and others.  Great job! 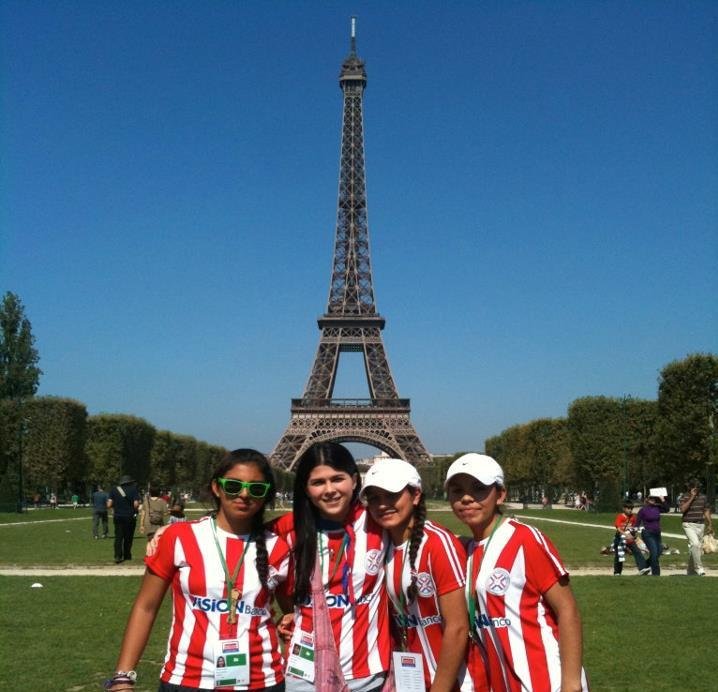 Vibrant Margarita Off to Market! 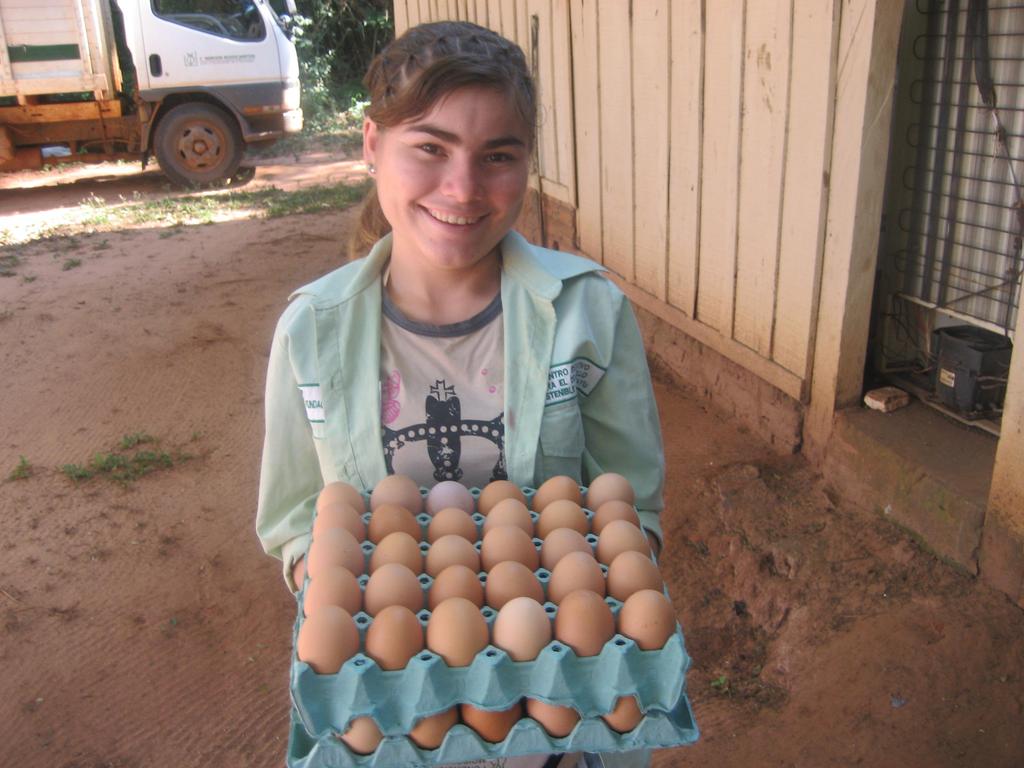 Margarita Amarilla, now a senior at the school is shy by nature, and came to the school speaking only Guarani.  Since she has been at the Mbaracayu Girls School, she has come out of her shell, and now speaks Spanish fluently.  She is friendly, and enjoys starting up conversations with others.  She is from a rural community and is the oldest of 9 girls in her family. Her sisters dream of following in her footsteps and attending the school one day. You are looking at a picture of Margarita preparing to sell eggs produced at the school at a local farmers market.

Thank you for supporting Margarita and her classmates in creating a better life for themselves! 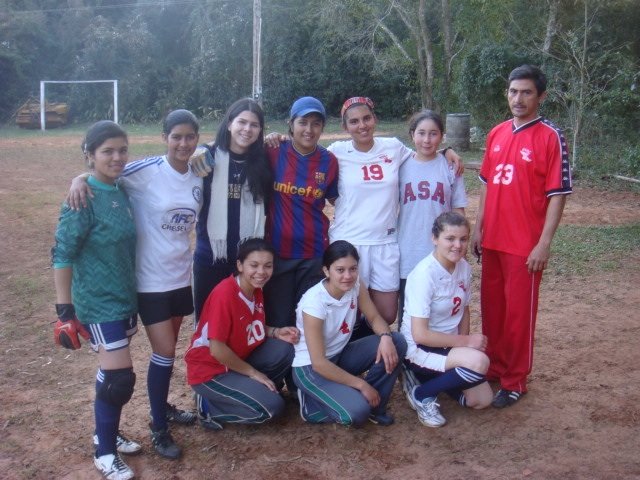 Last month, 8 students from the Mbaracayu Educational Center were selected to represent Paraguay in this year's Homeless World Cup to take place in Paris, France, from the 21st to the 28th of August.

These girls were drawn from the entire student body of the Mbaracayu Ed Center, a girls-only school comprised of around 144 adolescents.  After announcing the 11 shortlisted players in June, last month the candidates worked even harder to make it to the team.

The players that make up Team Paraguay were selected not only for their football talent, but more importantly, for their leadership skills, attitudes and motivation towards this annual world cup of street soccer.  They are:

Please support Team Paraguay get to Paris in a few week's time.  The team is looking for donations to cover certain expenses such as passport issuance, football gear and equipment, first-aid kit, among others.

Your support can really make a difference in these girls' quest to transform their lives through football, team work and shared goals.

We take this opportunity to thank our recurring donors for their continued support. 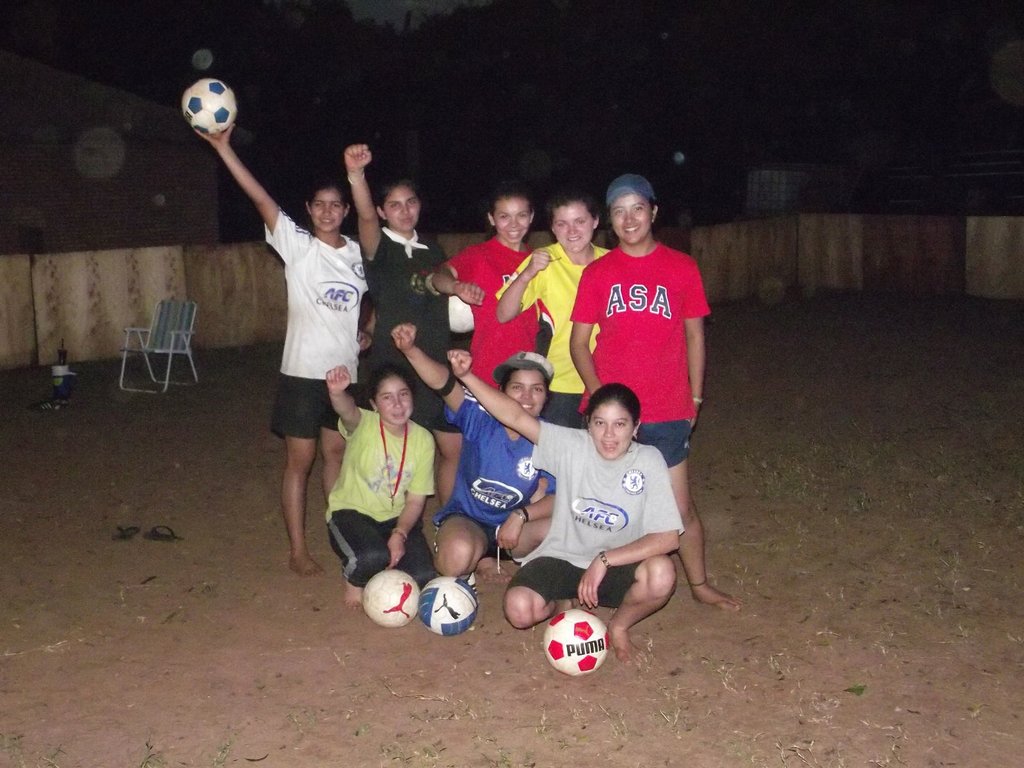 ASUNCIÓN – Paraguay (June 02, 2011).- Fundación Paraguaya held a press conference to announce the short list of players for the Women’s Soccer Team that will represent Paraguay at the Homeless World Cup 2011 to take place in Paris, France, August 21-28.

The soccer players are students from the Mbaracayú Educational Center located in the Mbaracayú Nature Reserve in the Department of Canindeyú, Paraguay. They were chosen from among the 142 students at the Environmental Sciences Technical High School. In addition to the basic curriculum, the students develop entrepreneurial and business skills through the diverse education for entrepreneurship programs- Junior Achievement and the Self-Financing Education model.

The shortlisted players are: Astrid Yadai Cáceres Portillo from Yrybucuá, Venancia Giménez from Itanará, Dora Elizabeth Galeanos from Britez Cué, Nancy Beatriz Florentín from Villa Ygatimi and Julia Clavelina Ortiz Bustos from 11 de Septiembre. The team also includes: Mariza Tykuarangi from Arroyo Bandera, Marta Mercedes Noguera from Villa Ygatimi, Bianca Caroline Soares from Nueva Esperanza, Sandra Aguilar from 11 de Septiembre, Raquel Airagi from Arroyo Bandera and Montserrat Oviedo from Villa Ygatimi. All are students from low-income rural families who were called to participate due to their skills in the realm of soccer as well as their positive attitudes and sense of camaraderie.

The organization invited to coordinate the Paraguayan participation in this international tournament is Fundación Paraguaya through its Entrepreneurial Education Program.

The international tournament uses this sport as a catalyst to encourage homeless youth to turn their lives around as well as to change the attitude of governments, the media, society in general and influential individuals to create better solutions for the problems faced by homeless people around the world.

HWC has international partners and allies such as the Union of European Football Associations (UEFA), Nike, Vodafone Foundation, the United Nations and soccer clubs that support this innovative initiative such as Manchester United from England and Real Madrid from Spain, as well as famous soccer players such as Didier Drogba and Rio Ferdinand.

Mel Young, co-founder of this world-level cup maintains that “more than 70% of the boys experience a favorable change in their lives and more than half have overcome addictions to drugs and alcohol. They have found their place in the educational system and have becomes agents for change in their community.”

The participation of the Paraguayan Women’s Team is enabled through an invitation extended by the organizers who will cover the stay of the players during the tournament, and local sponsors who are providing support by covering travel and equipment costs.

Global Givers can now join the cause in support of the girls' paticipation in this international social soccer competition by making contributions.

Many thanks in advance to our generous supporters.  Go Paraguay!

TARIJA - Bolivia.– The mayor’s office of the town of Uriondo in the Department (i.e., state/province) of Tarija in Bolivia, granted a scholarship to two adolescent girls from the community to attend the Technical High School Program in Environmental Sciences at the Mbaracayu Educational Center in the Department of Canindeyu, Paraguay.  The grantees are Edyza Ruiz, 15 years of age from the community of Miscas, Bolivia,  and Teresa Contreras, 16, from a community called Cruce del Valle in Bolivia, which lies close to the international highway towards the border with Argentina.

"Edyza is the daughter of a farming family. She told us she loves to read, travel and play soccer. At home they have a family vegetable garden where she worked and helped her parents", explained Celsa Acosta, Director of the Mbaracayu Educational Center.

"Teresa Contreras also comes from a farming family. She is passionate about animals and although she misses her community a lot she is adapting", said the Director.

The municipality of Uriondo in Tarija, Bolivia called on the best female students through the local press. After several meetings with parents and the students, the selection was made. Scholarships were given to Edyza and Teresa, who will live with another 150 girls who live and study at the Mbaracayu Educational Center.

This strengthens the relations between Fundacion Paraguaya's Self-Sufficient Schools Program and the town of Uriondo, which had sent a significant delegation to participate in the December 2010 graduation ceremony at the San Francisco Agricultural School, another Fundacion Paraguaya-run school in the Chaco region of the country. Among the graduates was Abednego Bolivar from Uriondo, Tarija.

The Mbaracayú Sustainable Development Educational Center is an undertaking of Fundación Moisés Bertoni and Fundación Paraguaya offering a technical high school diploma in Environmental Sciences to girls from low-income families of Canindeyú. It promotes entrepreneurship seeking to transform these girls born into smallholder families into agents leading sustainable development. The 150 students are girls from the Aché indigenous ethnic group, as well as from Paraguayan, Brazilian and Brazilian-Paraguayan smallholder families.