Education for Blind Children of Bangladesh 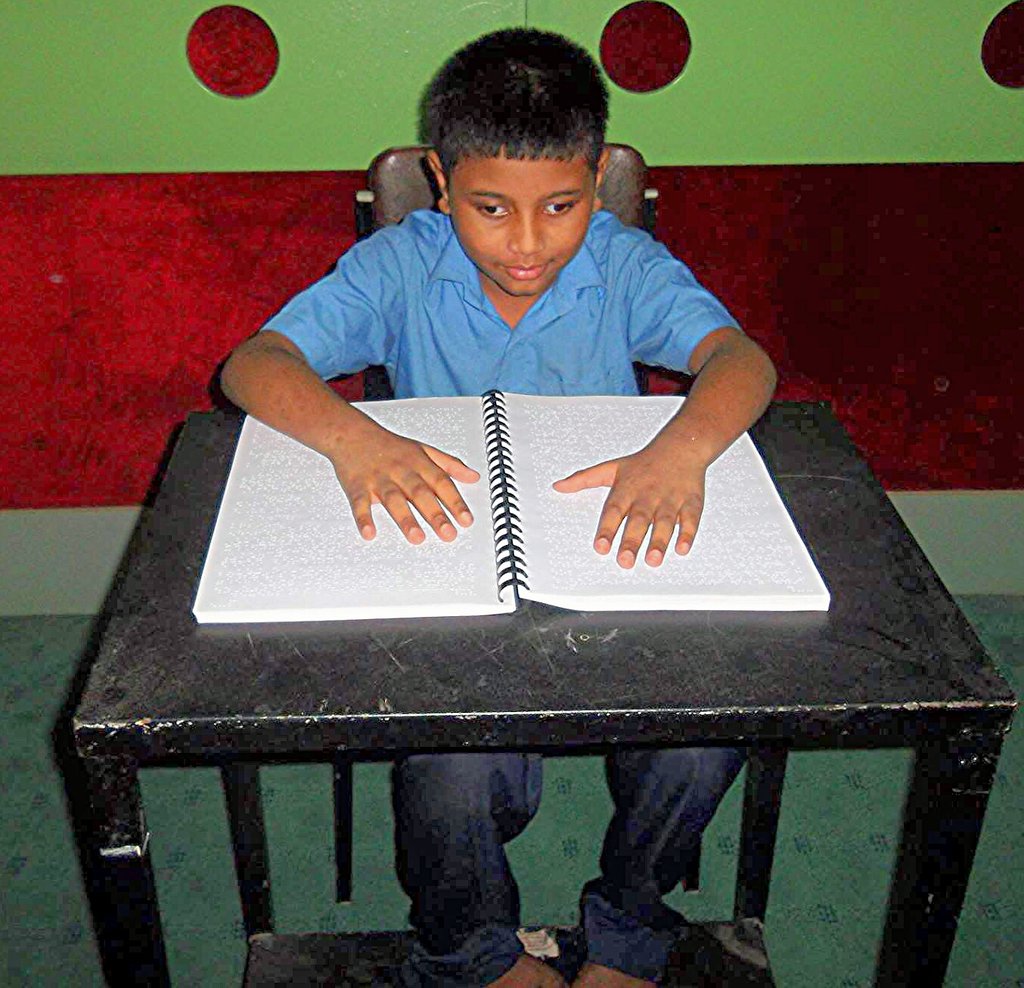 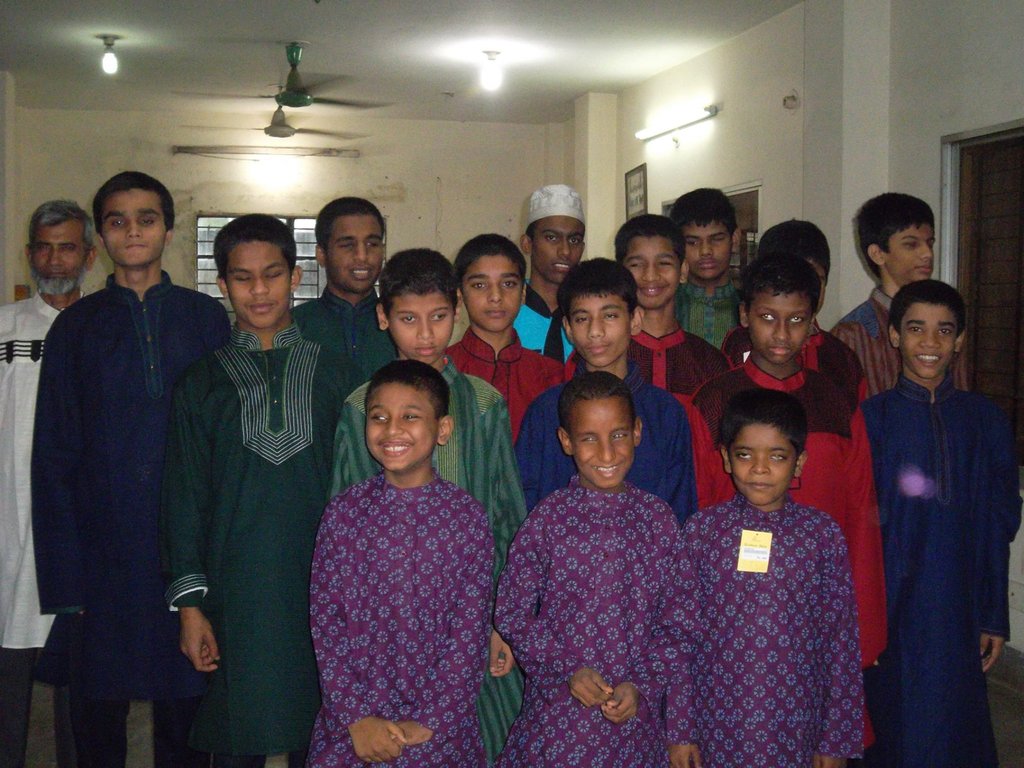 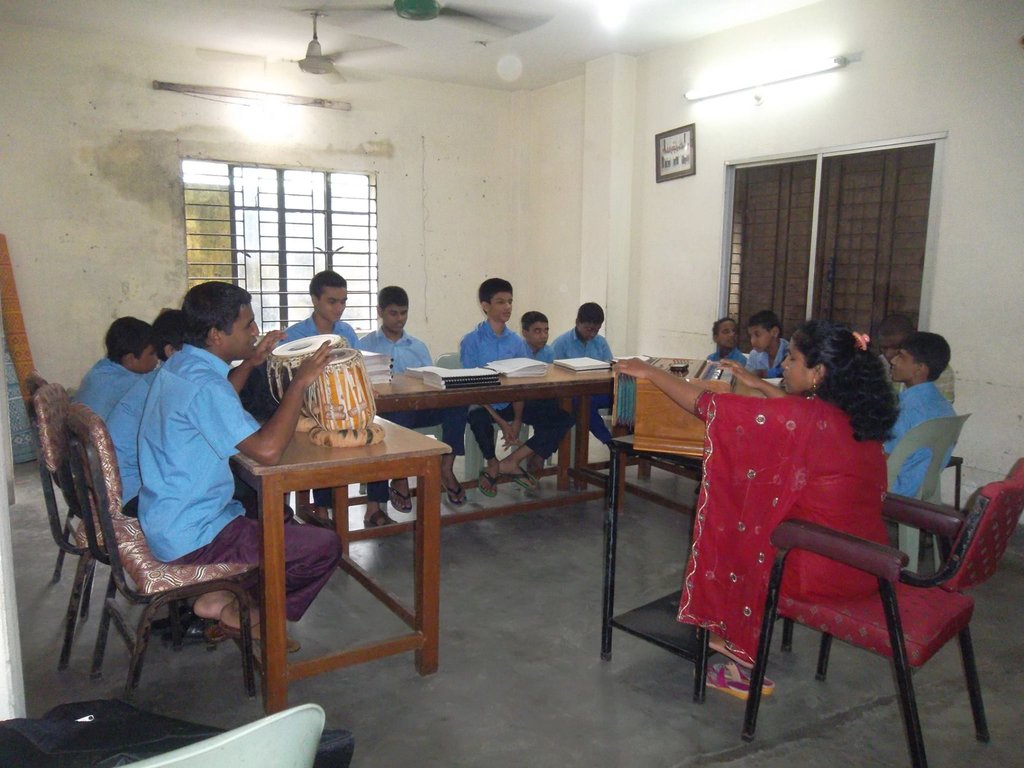 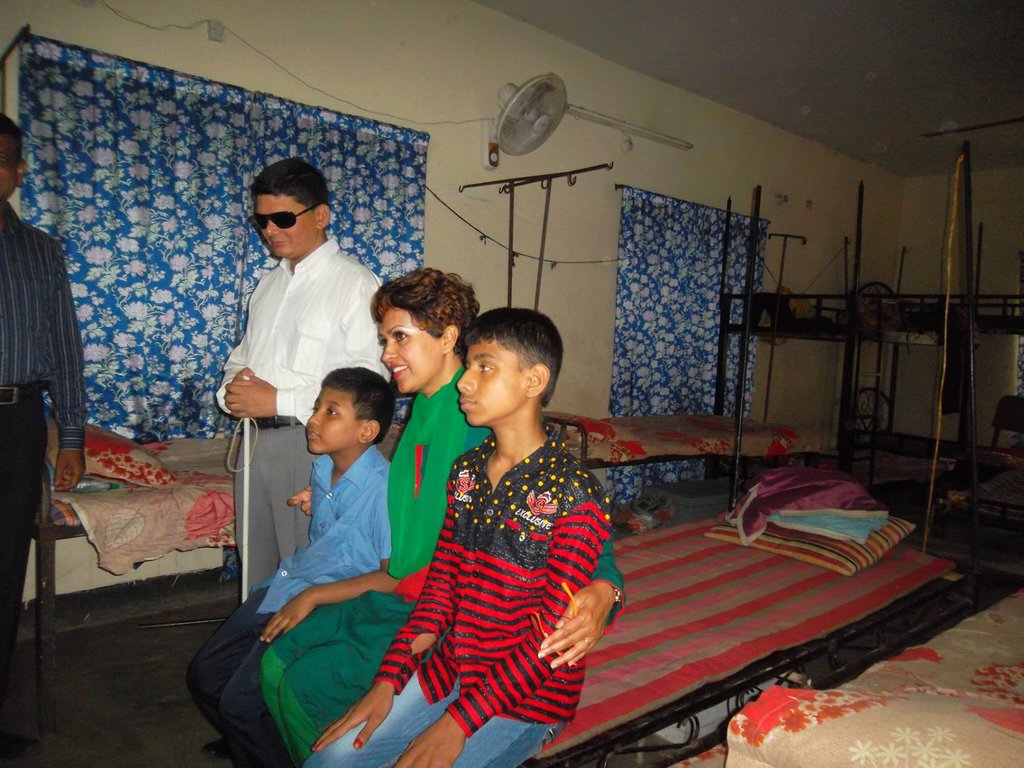 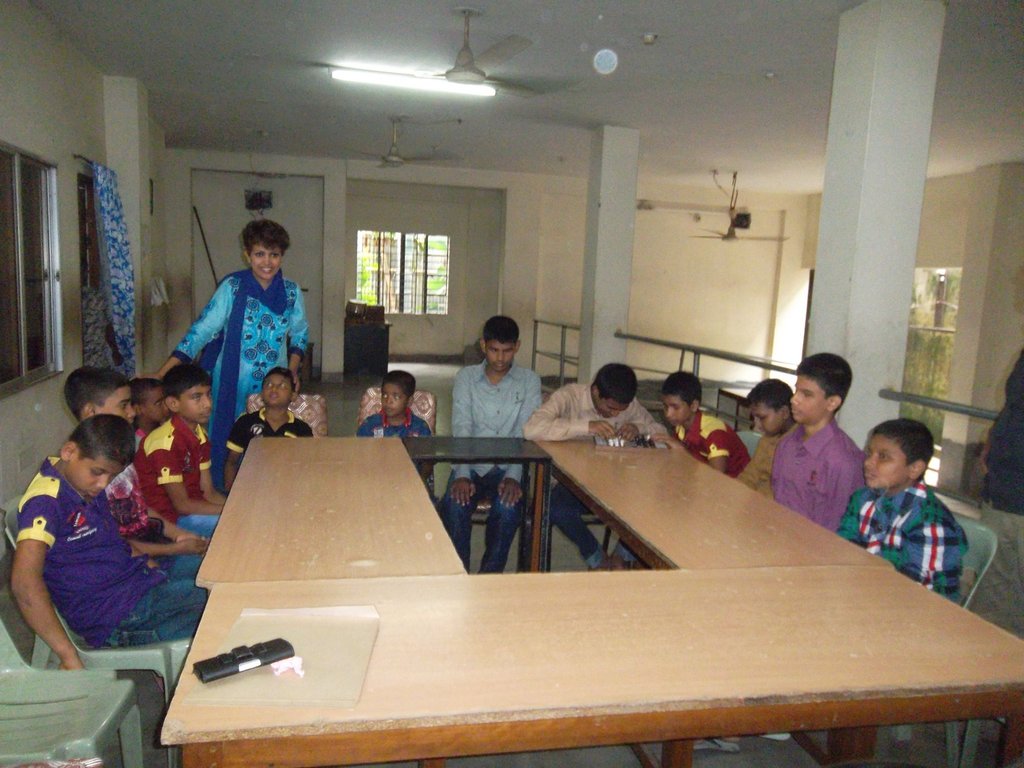 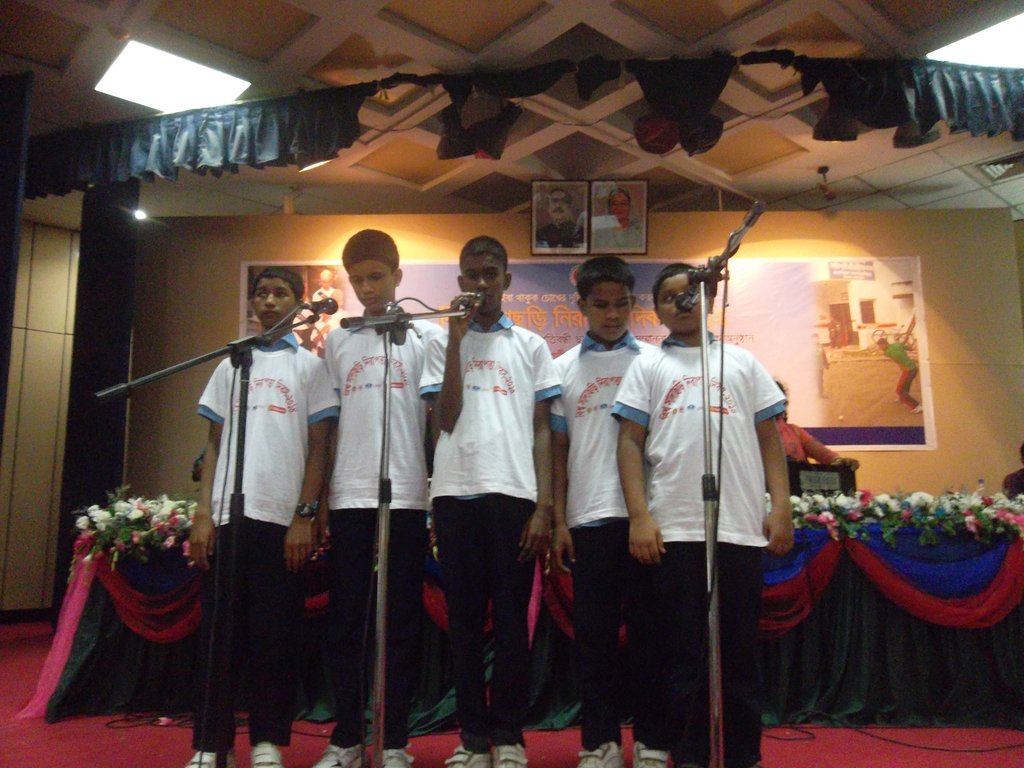 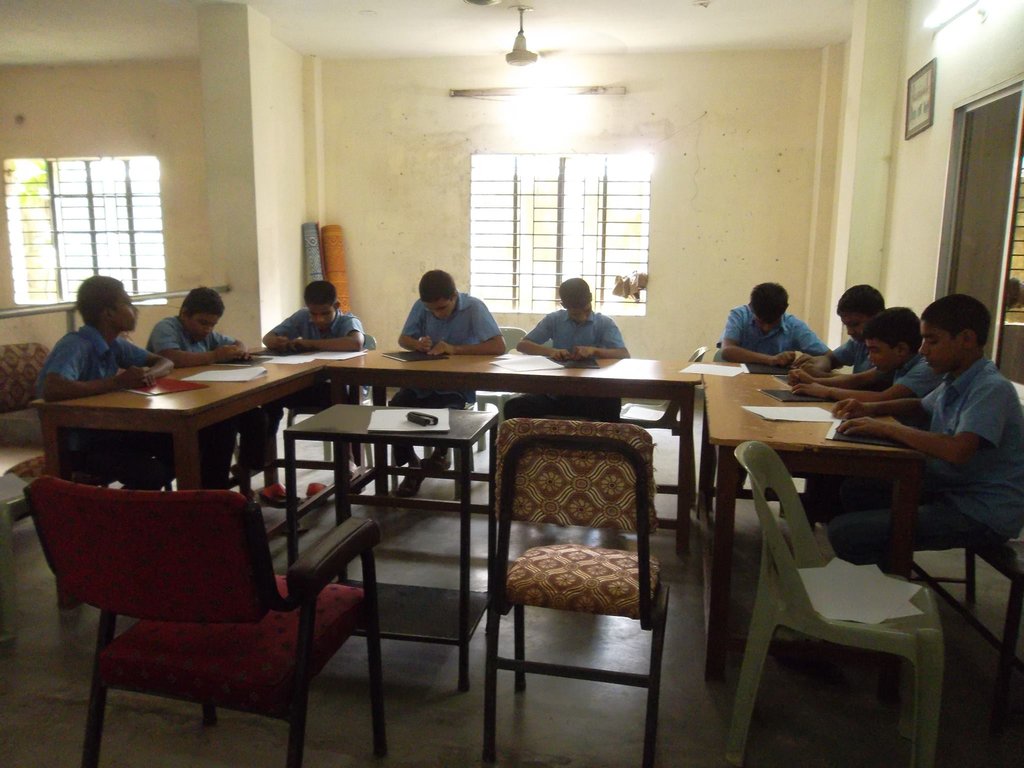 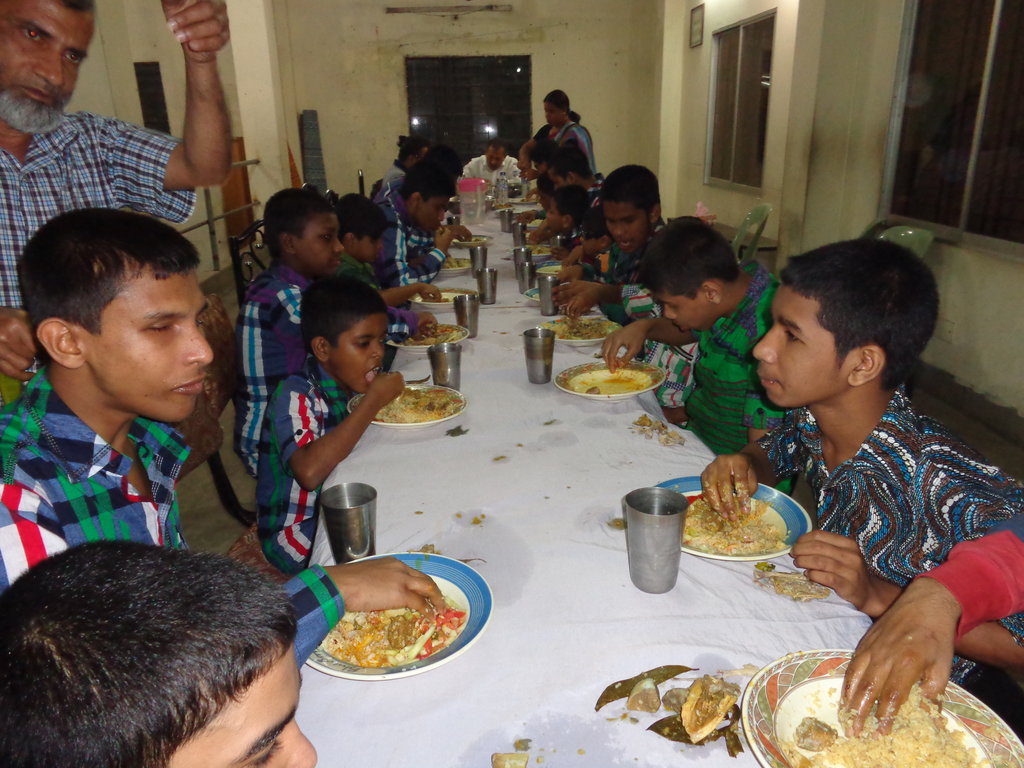 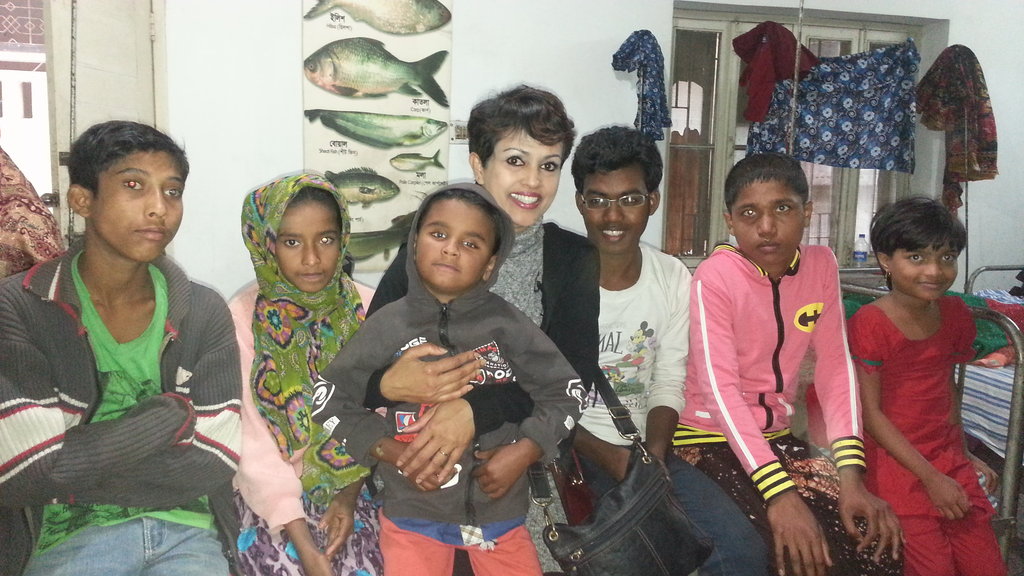 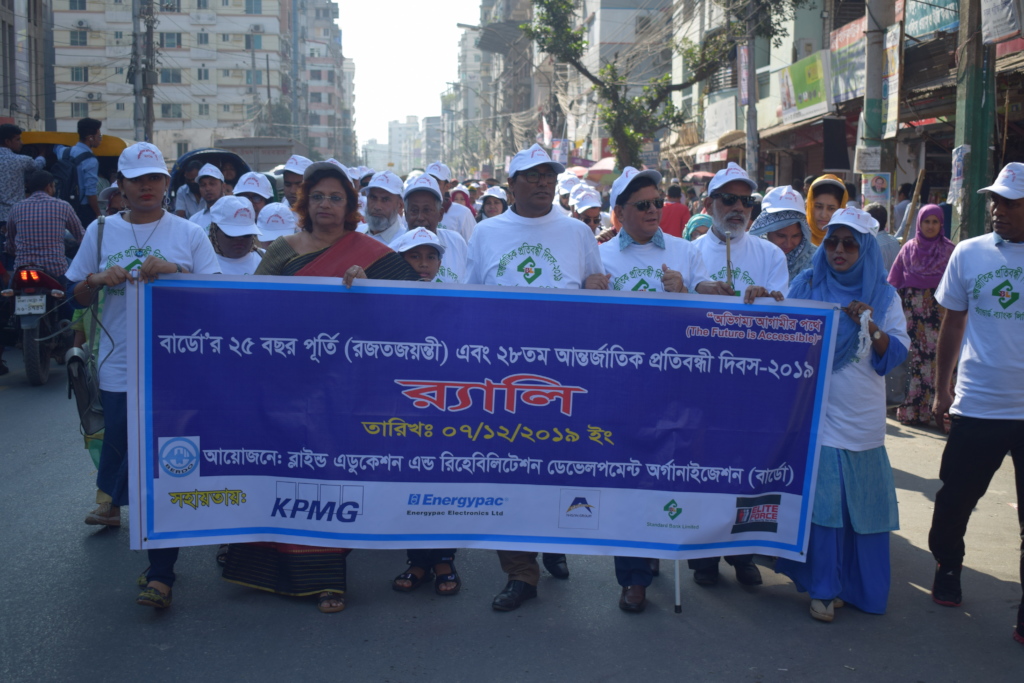 The event was celebrated in two phases. In it phase included its colorful rally and 2nd phase was performed with a cultural program.

At the beginning of the day a colorful rally with the participation of students, local people and executive committee members was organized and which started from BERDO head office premises and went around the different roads of Rupnagar residential area and finished at BERDO head office. Rally tried to disseminate messages on disabilities rights and development issues profoundly through slogans, festoons and banner.

After completion of the rally chief guest and special guest along with all distinguished guests, participants were gathered in conference room of BERDO. Chief Guest and special guest were received by Executive Director of BERDO and accordingly took seating the dais. In dais they were received warmly by giving flower buckets. Executive Committee members and staff of BERDO handed over flowers to the guests.

The discussion session stared with recitation and conversion of Holy Quran by Mr. Md. Khairul Azam. Later on, a welcome address paid by Ms. Hosneara Begum, Vice Chairperson of executive board. She welcomed all distinguished guests especially honorable planning minister Mr. M.A. Mannan and Special Guest Mr. K.M. Abdus Salam, DG of NGOAB and others patrons and well-wishers of BERDO. She also extended thanks to all supporters, staffs, local elites and NGO and media representatives. She tried to explicit different development activities and which also included its some failures during discharging its course of activities in the field of development. One of the problems highlighted was necessary lack of space for its permanent infrastructure as enhancing remarkably its different activities nowadays. Secondly disable persons are depriving from jobs though they are facing competitive examinations in job markets. Thirdly, they are reaching out from getting capital supports for IGAs. Government and non-government IGA providers don’t choose to provide capital supports for disables as able people are frequently disqualifying in repaying loan amount regularly and eventually loan providing organizations are becoming un well position often. They are confusing about working with persons with disabilities, whether these organizations are capable enough to repay loan amount. In this bad situation BERDO somehow received loan from some organizations and in due course repaying loan amount successfully. She then concluded her speech through extending her thankfulness to the supporters of BERDO.

Mr. A.H.M Noman Khan, Executive Director of CDD addressed in the meeting and demanded to the honorable minister to planning for giving his special concentration for disability issues in 8th5-year plan of government of Bangladesh.  He urged to increase budget for persons with disabilities with due importance.

Mr. Engineer Nurul Akhter from Energy Pack said that he is proved positively that persons with disabilities are capable enough to do work in this sector as like as other normal workforces. He already appointed some PWDs and he will also appoint some PWDs in his factory in future.

Engineer Mr. Khamrul Ahsan said that he has been working with BERDO for many years. He gave his opinion that BERDO is working very successfully in this arena through showing their accountability and transparency, which are very mandatory for a development organization. He said that he often tries to attend its programs regular basis. He then promised to be stayed with BERDO in future.

Later on, Adviser of BERDO Mr. Advocate Mosarraf Hossain Mojumder addressed in front of the gathering. He discussed about being problems with regard to disability sectors and at same time elaborated some way-out mechanisms very enthustically. He urged concentration of government in terms of disability rights and protection issues with due importance.

Mr. Md. Jiarul Islam, representative from Standard Bank Ltd. Informed the meeting that their Chairman supposed to come in this meeting and joined in the discussion session but due to a sudden important task he was unable to attend the meeting. But he said that he is always with BERDO and continue extend his hand for the help of BERDO.

Mr. Saidul Huq, ED of BERDO described the 25 years journey of BERDO from very early days to date in front guests and participants of the discussion session. He said that the journey was not bed of roses. It has been very tough to reach in position of BERDO deserves nowadays. In this long run evolving of the organization, a lot of friends, well-wishers, government agencies and private entrepreneurs extended their hands to have a well-established and proactive BERDO and its development targets. At the eve of celebrating its 28th years founding anniversary he expressed his thanks and respect to all of supporters from his deep of hearts. He elaborated BERDO’s activities and achievements during this time frame.

He requested to the chief guest for extending hand further for constructing BERDO head office from 4th level to 5thlevels which will help to increase its activities in future.

A PowerPoint presentation on organizational profile presented in front of chief and special guests and audiences by Deputy Director Mr. Shahid Ullah. He accordingly presented evolution of organization, its mandate, registration from different government authority, its running and phased out projects in and outs, governing board and donors etc.

Mr.K.M. Abdus Salam, Director General of NGOAB conveyed his greetings on the eve of celebrating Silver Jubilee founding anniversary of BERDO and 28th International Day of Persons with Disabilities. He opined that present Prime minister is a woman with full of humanistic attitude as well as she has keen concentration on disability as prior issue. He pointed out that in her regime Rights of persons with disabilities protection rights 2013, Neuro Disabilities Act 2013 and Policy on special education for persons with disabilities 2019 were enacted successfully. He said that most big infrastructures of Bangladesh are not disability friendly. He urged to work together for making these structures disability friendly and also for future course of actions regarding the matter. He paid his interest to know problems of NGOs and showed his interest to solve all problems accordingly.

The chief guest and hon’ble minister of planning ministry conveyed his thanks to BERDO management and stakeholders for its silver jubilee founding anniversary. He said that at least 10% population of Bangladesh has been suffering from different disabilities. People of this country have become conscious about disability issues. The hon’ble prime minister is very much conscious about disability and its different development issues. Many people know that quota system of job in Bangladesh is withdrawn, so job quota for persons with disabilities are also withdrawn. But in this meeting minister assured that the quota for PWDs jobs are still existed. He urged to make all buildings should have accessibility of PWDs. So, need due concentration on accessibility in all newly build infrastructures, roads and even in vehicles, he stressed again. He suggested all development organization for working under positive competitive manners excluding their unhealthy competition in the professional arena. He said in the meeting that his ministry makes plan of activities but financial supports are giving by finance ministry.

Hon’ble minister of planning committed to help BERDO for establishing a Braille printing machine and also to extension of 4th and 5th levels of BERDO’s head office as earliest possible time. He will request to department of social welfare in this regard. Besides, he will generously try to be done more on disabilities issues in the Parliament.

Thereafter concluding session started with the address by the BERDO chairperson Mr. Jahangir Alam as chair of the discussion session. He requested the chief guest to convey their demanded issues to the relevant government counterparts for taking necessary actions and remedial as soonest possible time. He accordingly elaborated different problems often faced by PWDs in their daily life. He then conveyed his voteof thanks to all especially for chief and special guest for attending in this occasion and inspiring all of stakeholders of BERDO. He extended his thanks to all guests and stakeholders of BERDOs for their presence and taking proactive participation in this celebration organized duly by BERDO.

After lunch time a participatory and enjoyable cultural program which included with sharing their aspiring words from its staff and other well-wishers of BERDO started by the facilitation of Executive Director of BERDO Mr. Saidul Huq. All participants shared their experiences and thought regarding growing of BERDO and their feeling and initiatives to develop this organization proactively. Student of BERDO and staff and stakeholders participated with different inspiring songs, poem recitation etc. Program concluded at 5.00 PM. 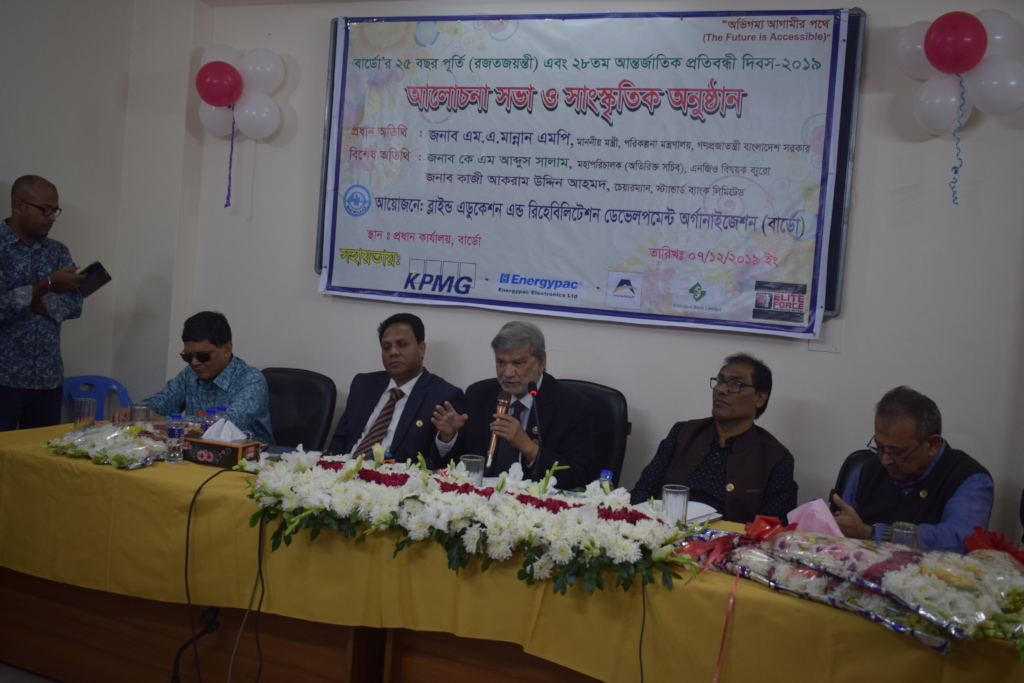 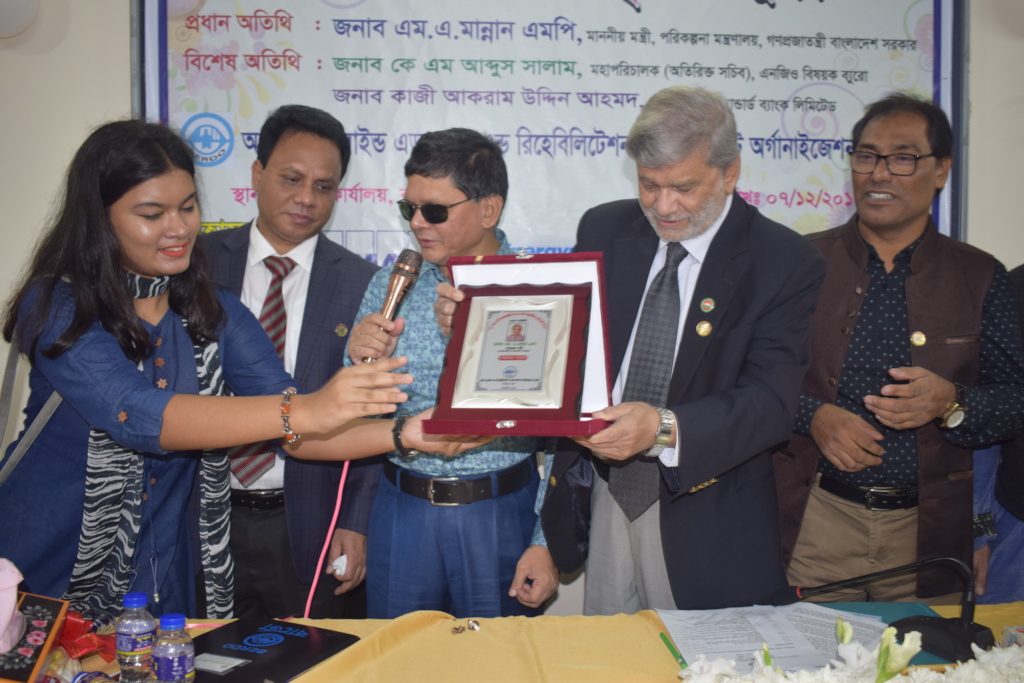 Donating through GlobalGiving is safe, secure, and easy with many payment options to choose from. View other ways to donate
BLIND EDUCATION AND REHABILITATION DEVELOPMENT ORGANISATION (BERDO). has earned this recognition on GlobalGiving:

GlobalGiving
Guarantee
Donate https://www.globalgiving.org/dy/cart/view/gg.html?cmd=addItem&projid=20767&rf=microdata&frequency=ONCE&amount=25
Please Note
WARNING: Javascript is currently disabled or is not available in your browser. GlobalGiving makes extensive use of Javascript and will not function properly with Javascript disabled. Please enable Javascript and refresh this page.