Educate and Treat the Invisible Children of Haiti 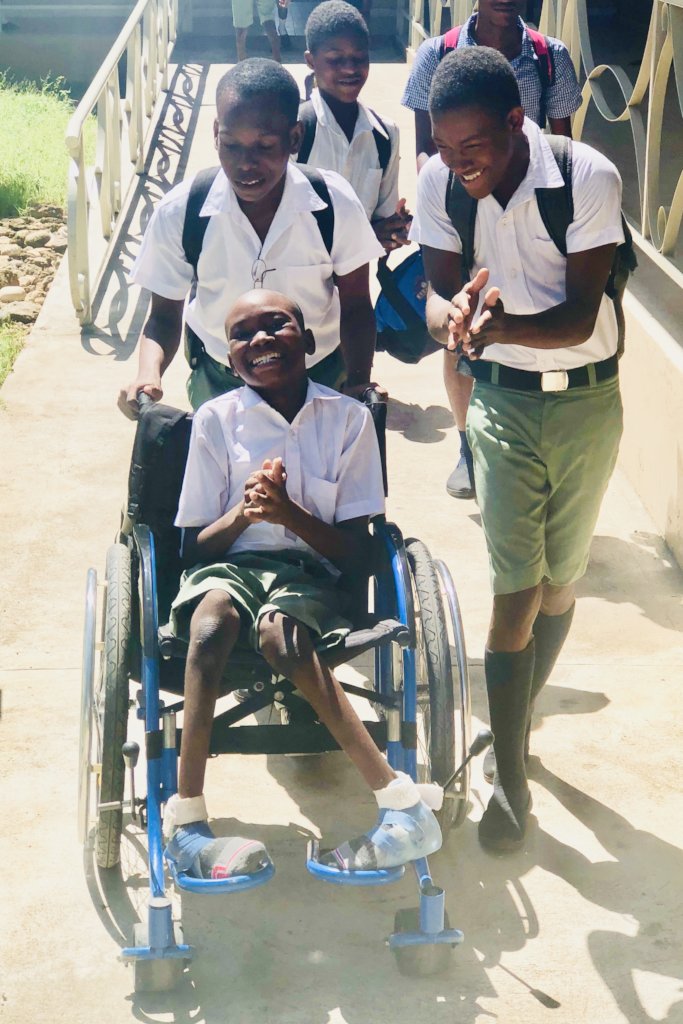 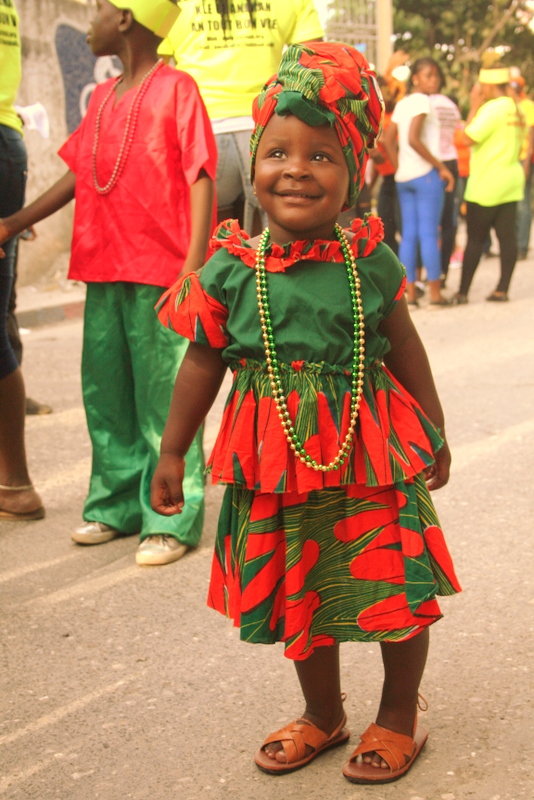 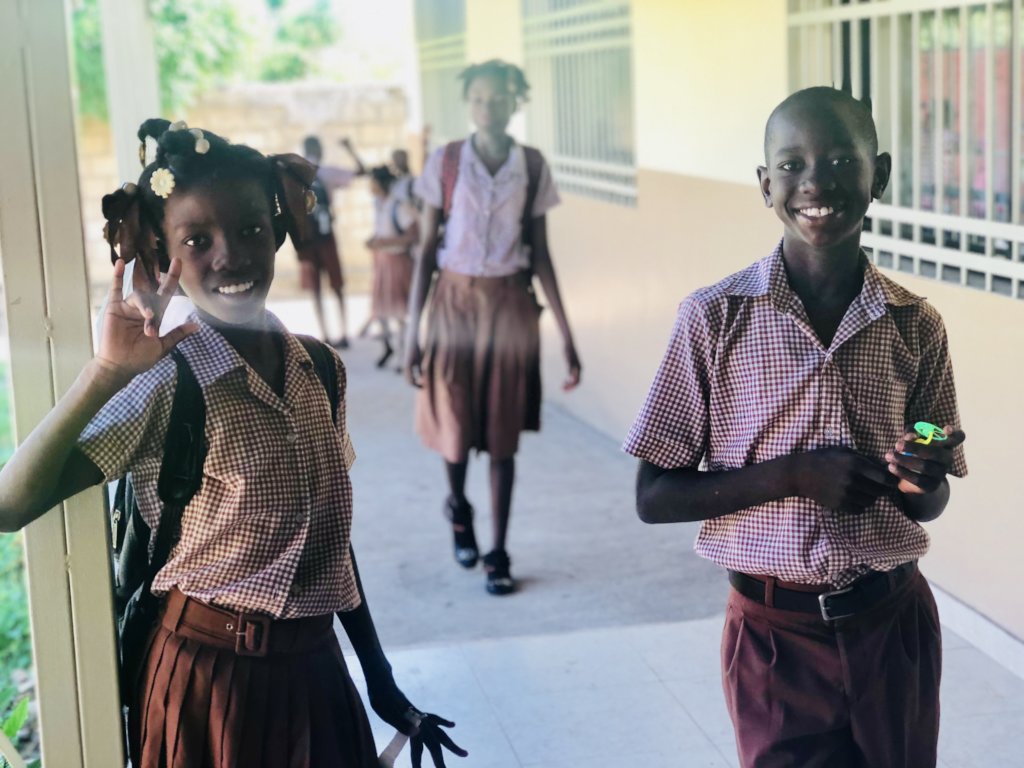 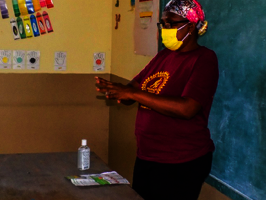 As countries around the world combat the spread of COVID-19, we have witnessed an outpouring of tributes paid to the essential workers who have been the prevailing backbone of society during this pandemic. For Pazapa, the Monitors (or, in non-profit parlance, “Community-Based Rehabilitation Workers”) have been the essential force behind our Rural Outreach Program.

Pazapa’s Rural Outreach Program serves approximately 160 children living with cognitive, neurological, and orthopedic disabilities in five rural villages. Each village has two trained Monitors who are responsible for critical initiatives that include: organizing schools, coordinating workshops for Children with Disabilities (CWDs) and their parents, setting up rural clinics for visiting doctors, determining when there are unmet nutritional needs, and facilitating Ti-Commerce micro-loans.   For these critical and varied services they are paid $1,000/year by The Siloé Project.

The stigma surrounding disabilities in Haiti means that children with disabilities are rendered invisible from society.  It is estimated that only 5% of the approximately 400,000 CWDs in Haiti have access to inclusive education or specialized medical care. The driving force behind the concept of Community-Based Rehabilitation, for which Pazapa’s Monitors are essential, is to ensure that Persons with Disabilities are included in all aspects of life. Such inclusion is central to Pazapa’s own mission.

Meet one of Pazapa’s Monitors

Caminta is the longest standing Monitor with Pazapa, and has been volunteering with the Outreach Program since 1998. Caminta is a mother of seven children including one son with Down Syndrome, Gregory. Her passion for children with disabilities grew when she brought Gregory to Pazapa., who is now very independent and works in construction. Caminta is well trained in Community based rehabilitation and is an outstanding leader.  She is very comfortable talking about Inclusion to the members of her community and puts her training into registering new children regularly and motivating parents in her area.

In response to grave nutrition needs, already exacerbated by six months of political lockdowns, Pazapa distributed two months’ food and anti-COVID hygiene supplies to 80 Outreach CWDs and their families, at about $100/family (Funded by The Siloé Project). Additionally, Monitors are continuing to work hard to ensure that the 51 children with epilepsy in Outreach areas are having their medication properly delivered and dosages followed.

This remarkable work of our Monitors and the entire Outreach Program for Children Living with Disabilities would not be possible if not for the continued generosity of our donors. 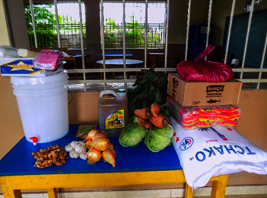 Food and Hygiene Kits for Distribution 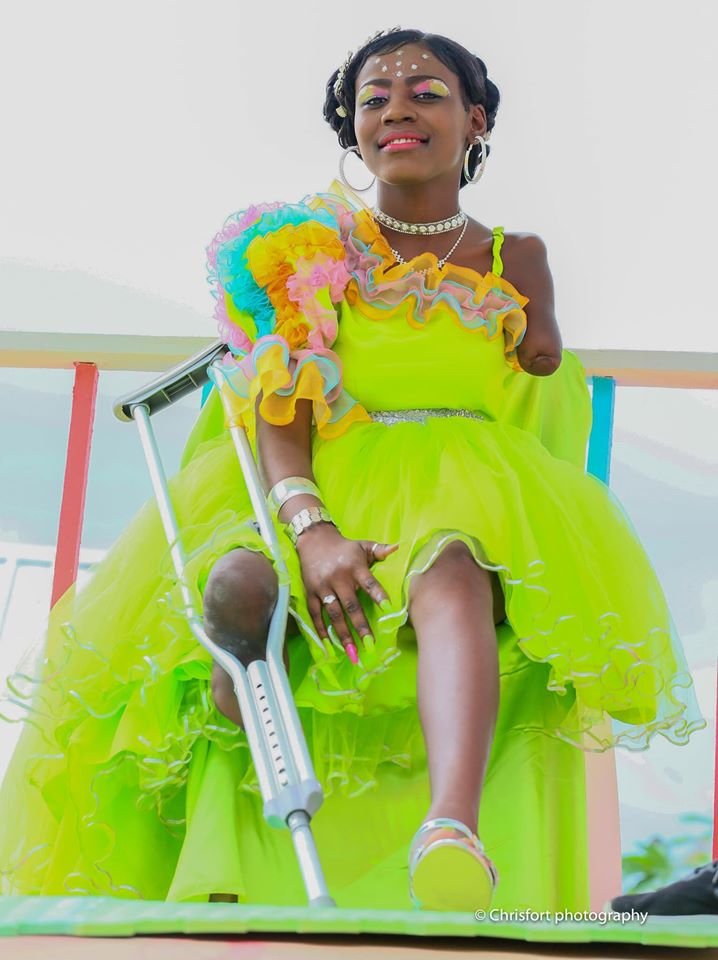 Throughout 2019, Haiti endured a political crisis that had lasting social and economic consequences. An increase in fuel prices subsequently led to widespread protests and civil unrest. Things quickly became violent, leading businesses, including health facilities and schools, to close down. In any crisis, the most vulnerable members of society, like Pazapa’s children with disabilities, are the first to feel the impact.

In November of last year, it was deemed safe to reopen Pazapa’s schools. By the end of the year the Special Education School had 116 students enrolled while the School for the Deaf had 31 students attending. The cost of educating each student is approximately $300 per student. Thanks to a recent grant from the Trio Foundation of Colorado, safe motorized travel will be provided to students who live outside walking or easy motorcycle distance of Pazapa.

Regardless of the hardships, Pazapa staff has done it’s best to help provide some normalcy in the children’s lives. In December, due to the generosity of our British friends at Pazapa Church Stretton who donated $2,000, staff was able to organize a Christmas party for the kids and their parents. A few months later, in February, Pazapa led a float in the Carnival parade with a message of solidarity between people with disabilities and everyone else. Pazapa’s float was crowned by 14 year old, Keshna, who was one of the victims of Haiti’s devastating earthquake in 2010.

While it seemed like life was slowly returning to normal, the global outbreak of COVID-19 has left things uncertain. As of March 19th, the government of Haiti has declared a state of emergency after detecting the country’s first two cases of the Coronavirus. It is hard to be certain of how bad things might become, however, due to a lack of sanitation infrastructure and inadequate healthcare services, a disease outbreak in Haiti could be potentially disastrous.

During the political crisis and subsequent lockdown, families experienced the impact of food and income insecurity. Because of the coronavirus there is a very real threat of this occurring again. Pazapa’s families are statistically speaking the poorest in the region and have less access to the small amount of basic resources, such as food and medicine, available. By supporting Pazapa, you can help to financially contribute to a family’s future and ensure that children living with disabilities are also able to access these recourses. 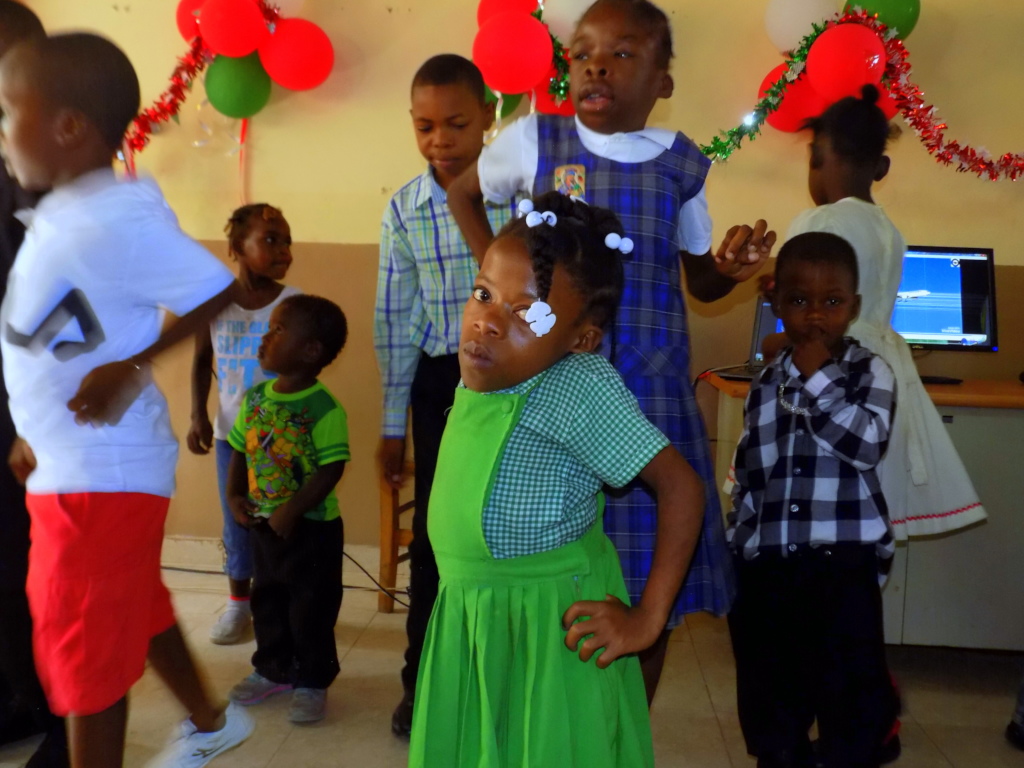 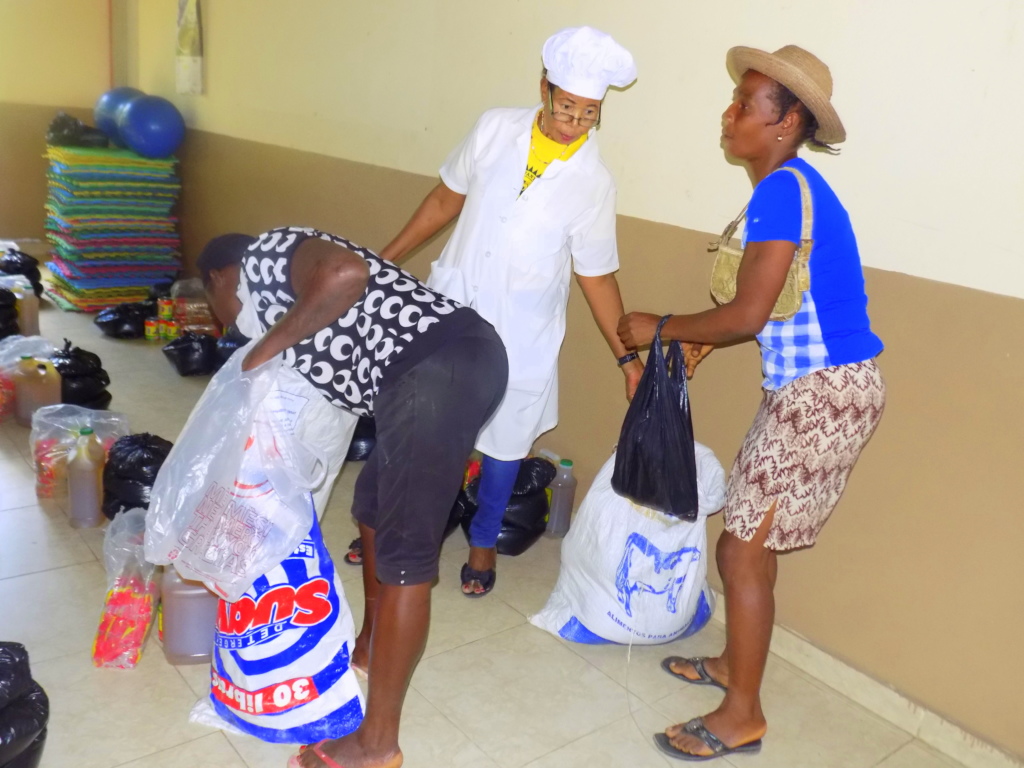 Accessing Services as a Child with Disabilities

By Kate Garcia - Accessing Services as a Child with Disabilities 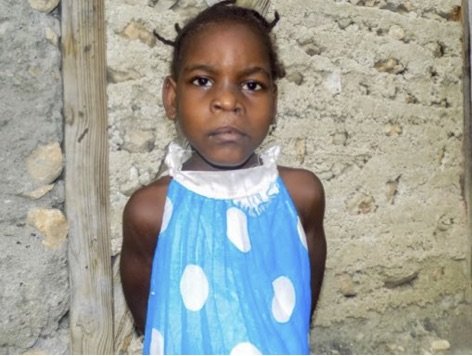 You may have seen Haiti in the news lately, as unrest has gripped the country in response to corruption allegations, a complete lack of basic services, and skyrocketing inflation. Over 60% of the population lives in poverty and a quarter face extreme poverty — including the majority of Haitians with disabilities. According to a recent UN report, Haiti now has the highest rate of undernourishment (49.3%) in the region. Our team has been working tirelessly to make sure the Pazapa community has food and access to essential medicine despite the deepening humanitarian crisis.

Dorestan is one of Pazapa’s own who has been deeply affected by the ongoing humanitarian crisis. Dorestan is 7 years old and has been attending the Special Education School at Pazapa since 2016 because of a learning disability. She and her 3 other siblings live with their mother but have no fixed home and usually live with friends or family who willing to take them in.  Dorestan’s family is very poor and the current crisis in Haiti has rendered their situation even more vulnerable. The family that was helping them can no longer do so because they too are now struggling so Dorestan’s mother has had to make some drastic decisions in order to save her children. The children are no longer together, they have each been dropped off to a good Samaritan and the mother is begging for money in the streets of Jacmel. Dorestan is no longer in Jacmel. She is living in Orangers, an area plagued by gang violence. Her mother has lost all hope that things will improve but is simply asking for help because her children are all suffering enormously in these times. All donations will help children like Dorestan and their families have access to basic social services like food, clean water and medical care.

Overcoming epilepsy to enroll in school

By Charles Scholes - Board President 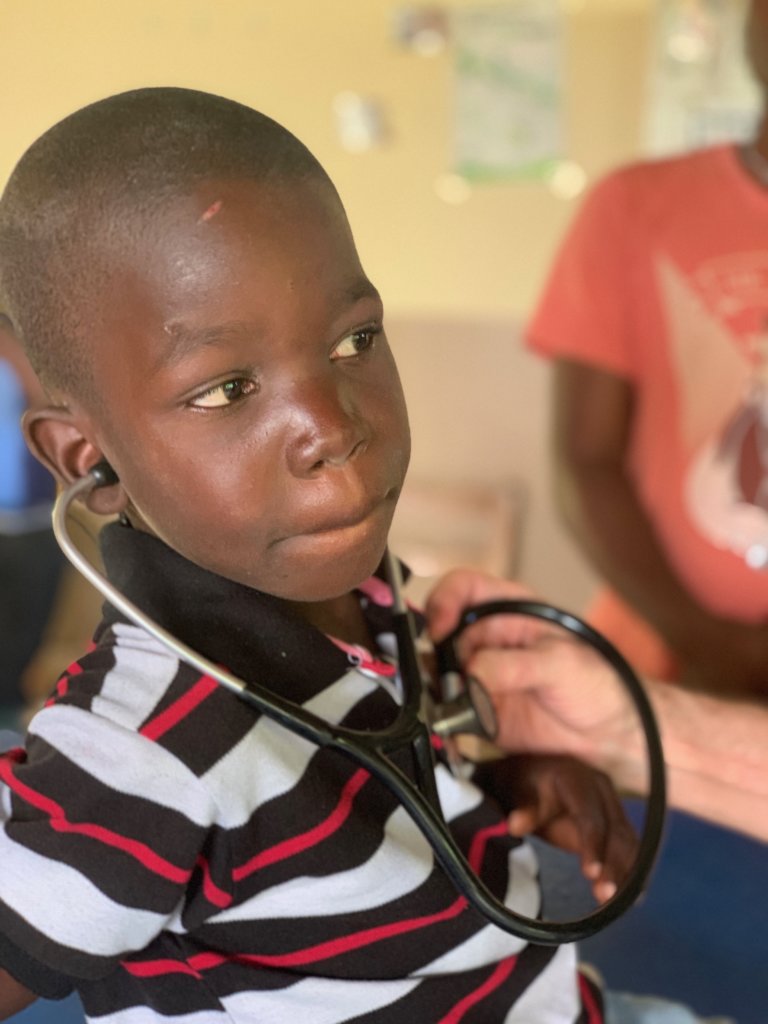 Because he lives with pediatric epilepsy, Christien was denied access to his local school and because his family lives in poverty, making the trip into town for school at Pazapa every day was impossible. But his father has been bringing Christien to Pazapa’s neurology clinics for years, and maintaining the medication regimen prescribed by local pediatrician, Dr Frantzo Nelson in consultation with visiting pediatric neurologist, Dr Chris Miller. At a recent clinic, Christien’s dad proudly informed us that because he is now seizure-free, he's able to attend school for the first time! Christien is just one of the many children who have a shot at an education because of donors like you.

Project Leader:
Kate Garcia
Jacmel, Haiti
$15,104 raised of $15,000 goal
You last donated to this project on
116 donations
$0 to go
* Amounts in US Dollars
Donate Now
Donate once
Donate monthly
$25
USD
can prepare a child for a life-changing orthopedic surgery
›
$50
USD
can offer micro loans and small business training to a mother to support her child living with a disability
›
$125
USD
can treat a child's epilepsy and stop the seizures
›
$250
USD
can cure a child's clubfoot through casting and ongoing rehab
›
$500
USD
can sponsor a year of special education, art and meals for a child impacted by disability and poverty
›
$900
USD
can teach 9 young women with disabilities how to earn income through art, cooking and sewing
›

Make a monthly donation & get matched today at 100% while funds remain. Terms and conditions apply.
Give the gift of stability in a time of instability. Set up an automatic, monthly gift now and get matched at 100%—because the COVID-19 pandemic has hurt us all, and it will take all of us to overcome it. Terms and conditions apply.
Monthly giving is as easy, safe, and as inexpensive as a Netflix subscription. Start a monthly donation to The Siloe Project dba Pazapa today and get matched at 100%. Terms and conditions apply.
$20
USD
monthly
can provide orthopedic care and rehabilitation to a child with physical disabilities like Sebastian for a year
›
$40
USD
monthly
can provide a child like Juliet with specialized deaf education and access to the arts for a year
›
$100
USD
monthly
can provide a year of vocational training and microcredit to 10 mothers of children with disabilities so they can lift their families out of poverty
›

Donating through GlobalGiving is safe, secure, and easy with many payment options to choose from. View other ways to donate
The Siloe Project dba Pazapa has earned this recognition on GlobalGiving:

GlobalGiving
Guarantee
Donate https://www.globalgiving.org/dy/cart/view/gg.html?cmd=addItem&projid=39285&rf=microdata&frequency=ONCE&amount=25
Please Note
WARNING: Javascript is currently disabled or is not available in your browser. GlobalGiving makes extensive use of Javascript and will not function properly with Javascript disabled. Please enable Javascript and refresh this page.