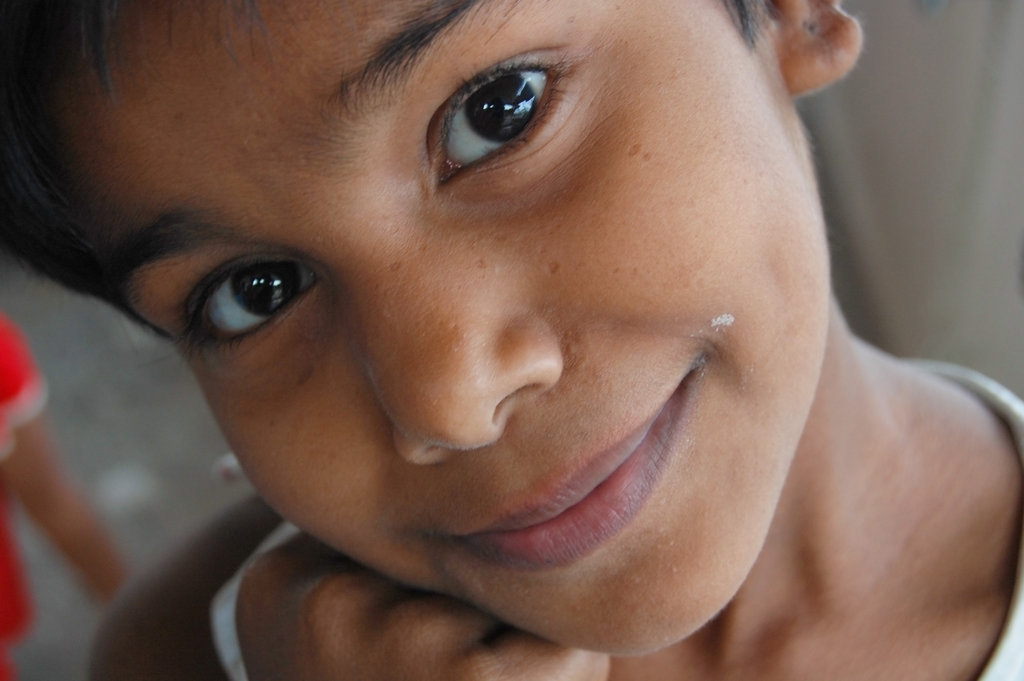 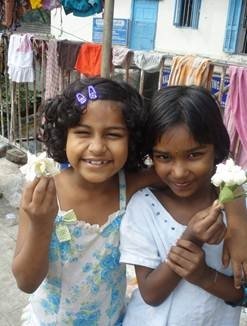 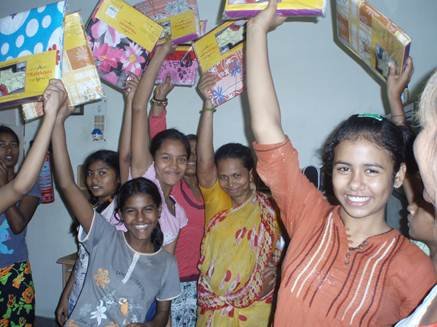 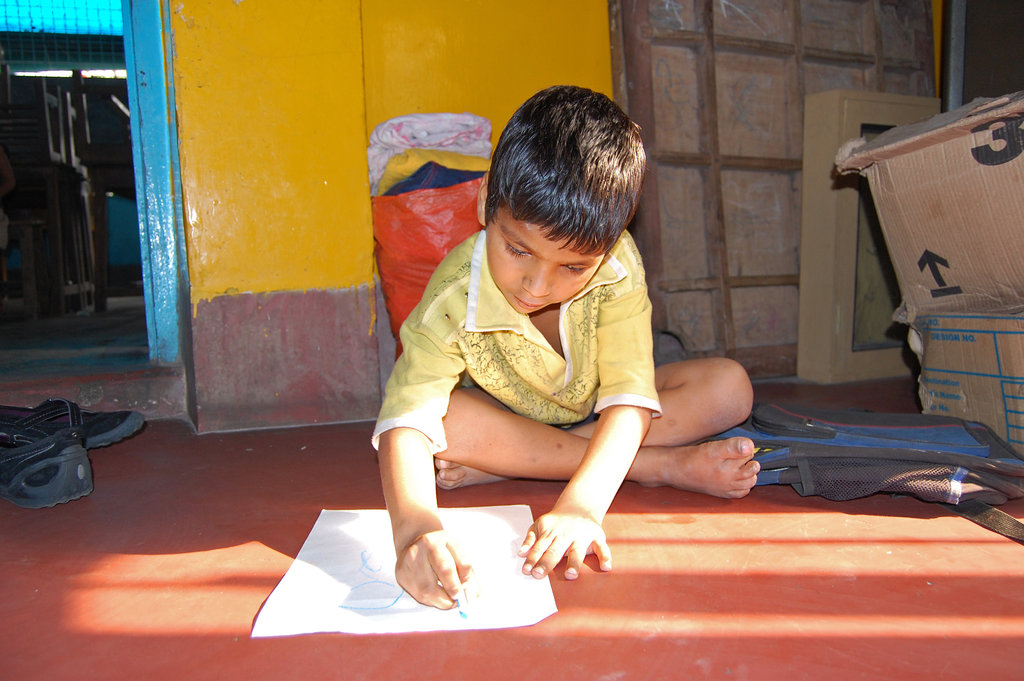 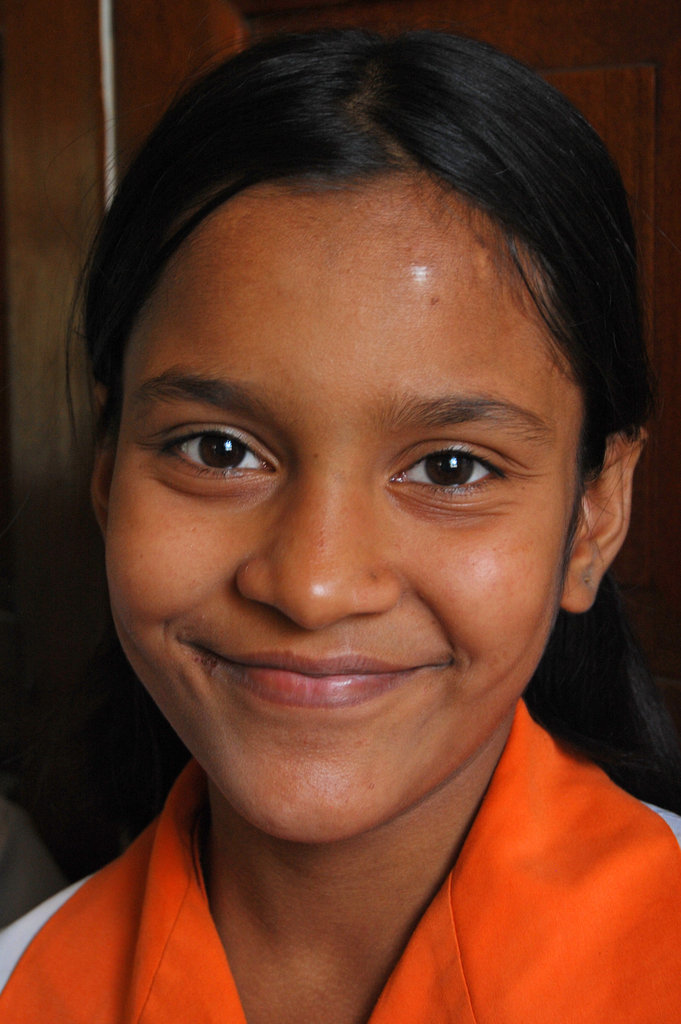 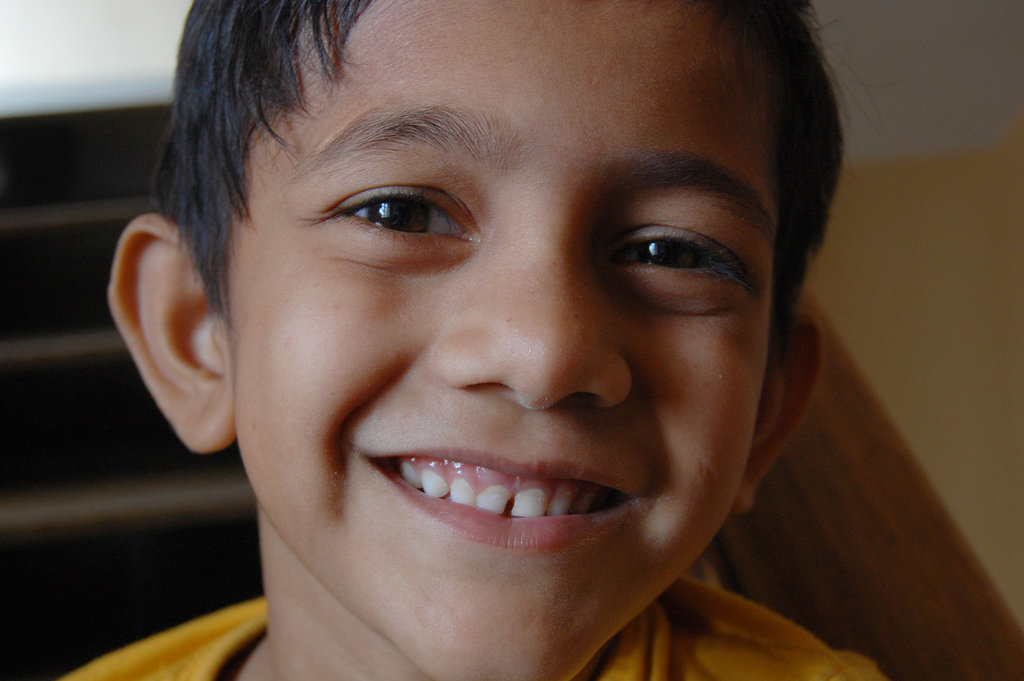 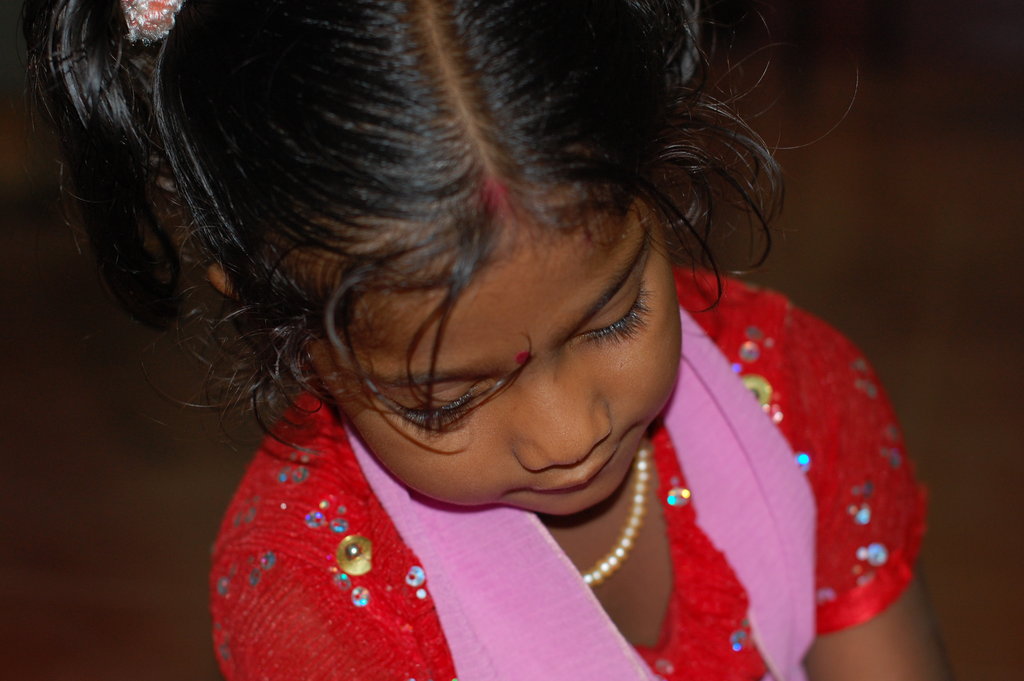 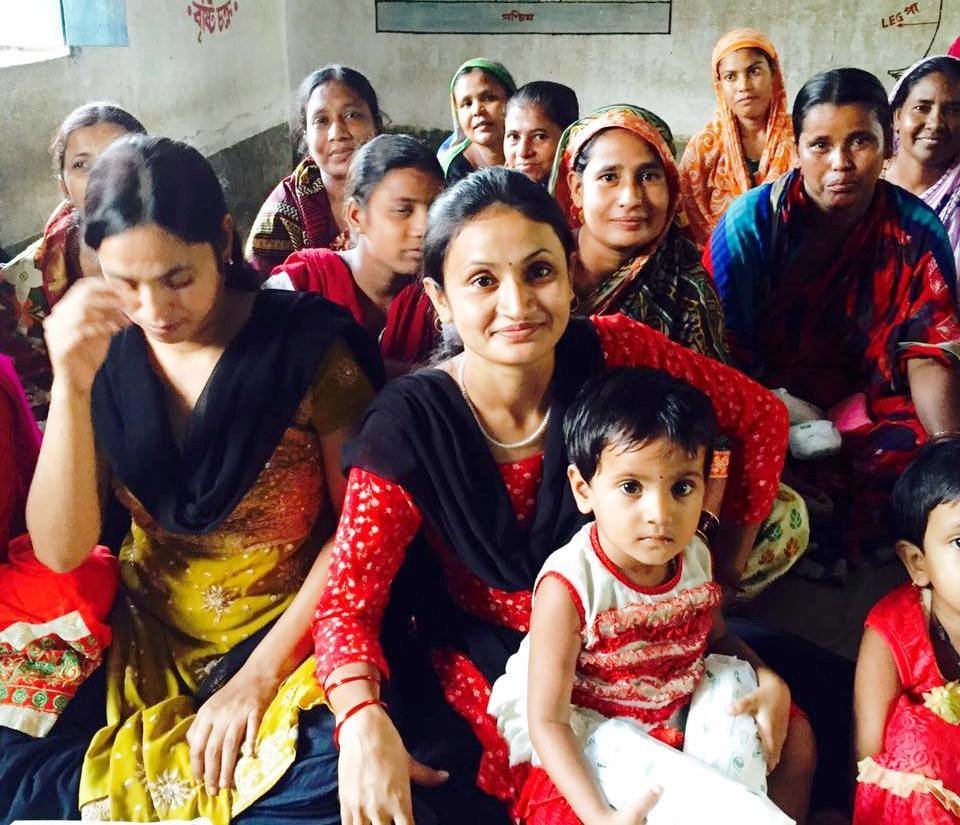 It's hard to convey the atmosphere at the New Light Shelter in the Kalaghat red light district in Kolkata. You can hear children laughing and playing together, books being read by caregivers and volunteers, nutritional meals being served and Montessori-style learning in small preschool classes that engage the very young in the wonders of learning. The smells and sounds heighten your senses and yet it was somewhat of a blur.

One day while I was at New Light, a PTA meeting was being held midday. The children were in their classes and the mothers were sitting on the floor with their brightly colored saris listening to lecturing, scolding, and praising from Urmi, the inspriational director - all for the well-being of the children. Urmi is a rare individual who makes loving contact with each child and woman. The staff is not always paid on time but they are dedicated and caring regardless. The women who are sex workers in the evening come to New Light for a monthly meeting to become better parents, to be aware of the dangers that lurk for their children, and to work with New Light in making sure that the cycle of slavery is broken.

Whenever possible, New Light gives the mothers an escape route but the issues of intergenerational prostitution run deep. The women don't want their children to be victims of their low status in life and are happy that New Light is focusing on education and skills training for older boys and girls.

New Light shelter is supported by donations from individuals like yourself, corporate gifts, and foundation grants. Most of the time its very difficult to make ends meet. Each small donation goes far. If you have been donating, many thanks. I can attest to the benefits of monthly donations that ensure a hot meal, a teachers salary, a doctor and a future for children of the red light district. 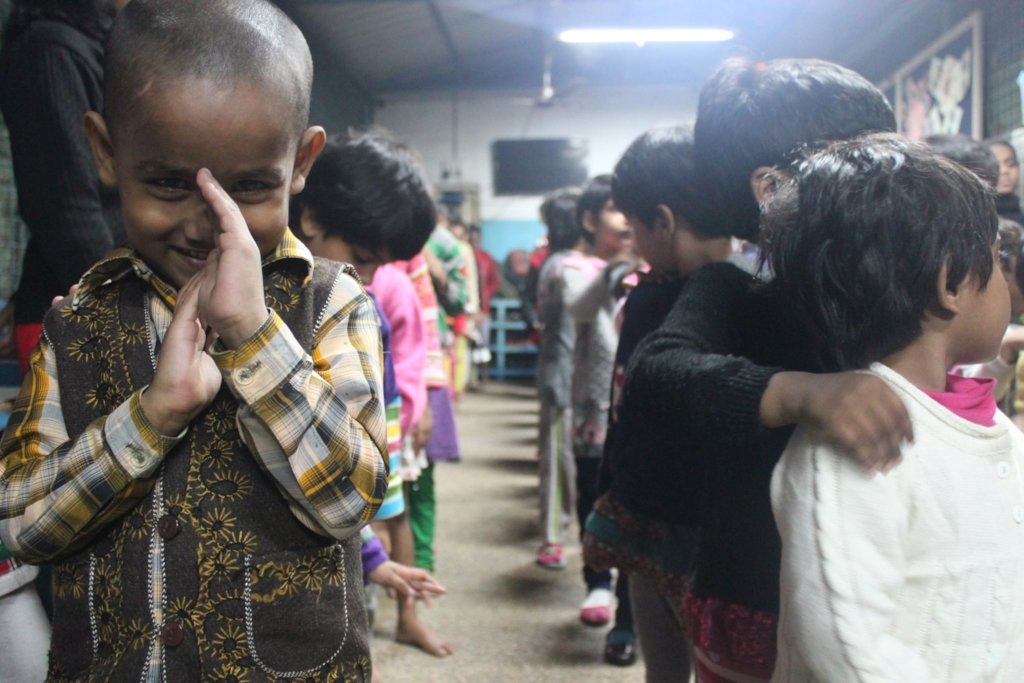 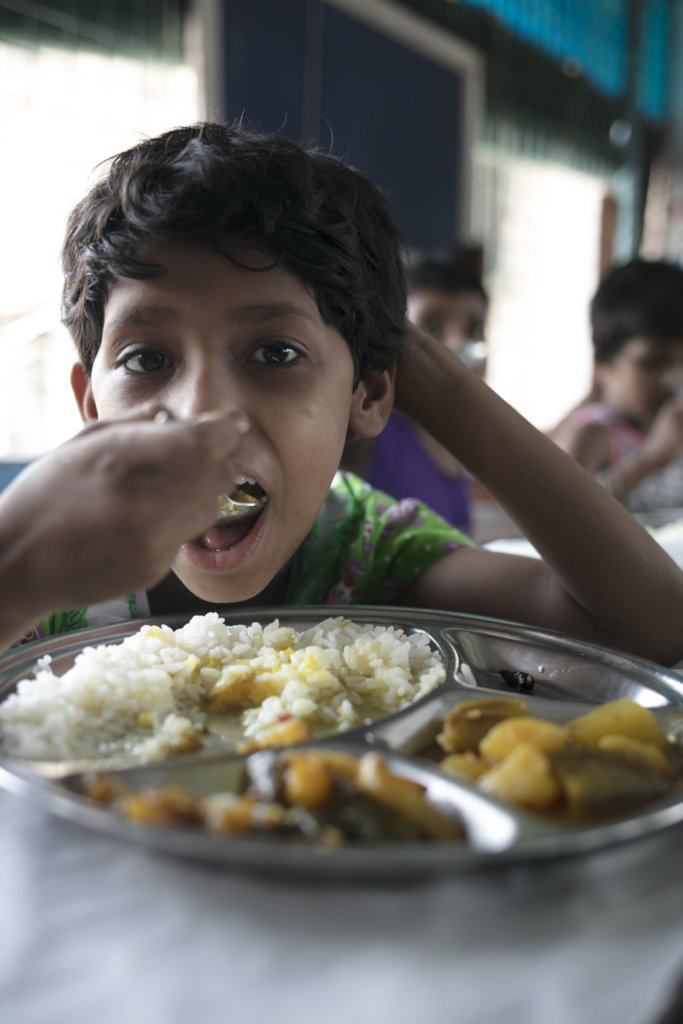 Boy in the shelter eating a nutritious meal

After my trip to India to visit New Light and the shelter, I'm very moved by the experience.

What began as a shelter for 8 children whose mother were prostitutes in two rooms in a dark alley of the Kalighat red light district, fifteen years ago, has evolved into a 24/7 program for more than 200 kids today. The shelter, located in a permanent structure above a temple situated deep inside the Kalighat red light district, offers comprehensive care and support to the children ranging from a few months old to sixteen years. The strength of the New Light shelter is in the dedicated staff and volunteers that provide the sex worker mothers, an opportunity to keep their young kids in the safe and loving custody of caretakers instead of being in the streets or sleeping under the bed of their mother. Most children from the neighboring areas use the shelter as a drop-in center where they can rest, play, read or acquire computer skills. During the day the shelter is abuzz with the continuous stream of children who attend the local schools and come to relax at the shelter after a hard day outside or sit and read a book in the library. For many of the kids whose mothers don't have any permanent residence, the shelter is the only place they can call their own. This is not just a shelter but a place where children are mentored and educated. The older children are in housing separate from the red light district. Instead of it being a warehouse for children in dire circumstances, the children are mentored and tutored and all talents and interests are taken into consideration.

They do accept volunteers so if you are also interested in visiting New Light, please don't hesitate to contact me at Shana@villagevolunteers.org  You will never forget this community filled with love and laughter.

I Just returned from India and I'm inspired! 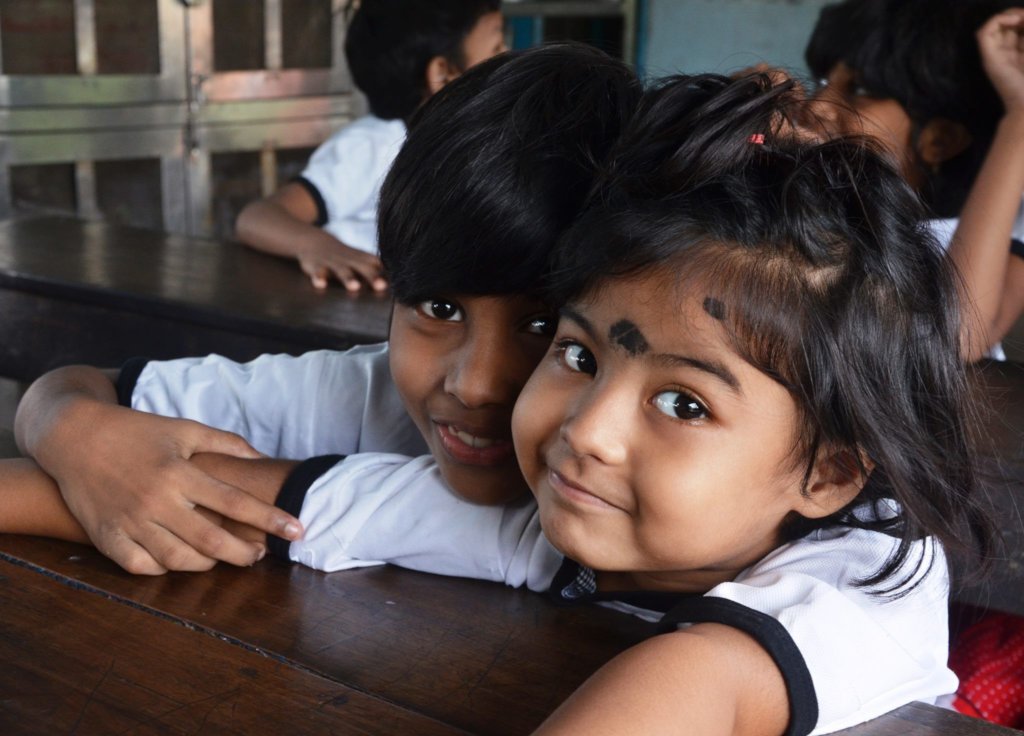 I just returned from a two and a half week trip to New Light in the Kalighat, red light district of Kolkata, India. This was not just a site visit but an intimate understanding of the interworking of this extraordinary program and the loving staff that keeps the program going.  New Light is not a place that warehouses kids who are the children of the red light district (children of prostitutes) but a place for children to go with all the love and care that is needed to take children out of a living hell.

At the shelter during the day, there was a parent/teacher meeting with the mothers.  While it was all in Bengali, I could understand that most of Urmi's conversations to the women seemed a little like scolding but always for the children's welfare. The children were at either of two preschools run like a Montessori style program. At night when the mothers were working, the children would come in for a meal, to play, go to the library that just opened up for the kids, and then often slept overnight on the mats on the floor. Some of the children were total orphans. One little girl, Pia, is over three but was very tiny. She and her sister were there together and were darling. I was sitting at the preschool and Pia came over and looked at me with those big eyes. I picked her up and within a few minutes she was curled up fast asleep. Their mother had committed suicide in one of the villages nearby and they were fending for themselves. As imagined, Urmi went to scoop up these two precious little girls. They are very eager to learn and New Light will give them every chance.

Walking around with Urmi Basu, the founder and director of New Light, was like being with a stern aunt on occasion, a staunch supporter on another but always a loving mentor who deeply cares.  At ten years old the children are in danger of being nabbed into the sex trade, they are taken to another "boarding" situation but its large boarding homes with  house parents, time for homework, and lots of extracurricular like sports and traditional India dance.

The issue I was very aware of is what it takes to run New Light. Since the results are so stellar and I saw nothing but hope and future for these children, I am asking for your assistance to perhaps do a monthly subscription of any amount.

You have helped make the difference

Thank you so very much for the support you have given to New Light's shelter and homes. The program director, Urmi Basu belives that its every child`s right to grow up in a world that is safe and secure in every aspect. Unfortunately for years the issue of child safety and security remained a matter of lower priority in India. Recent research reveals that fifty percent of all children in India are abused either physically or sexually or both. What comes as a shock is that fifty four percent of those are boys, hence, the development of the boys home. As is the case with many other social evils the ugly head of child abuse and molestation remained covered in the shroud of denial for the longest time.  However, n the digital age when the world is watching the entire nation has to wake up to these disturbing facts and take action. At New Light the need for a safe shelter could not be more urgent. In the lanes of many red light districts where the mothers need to work in the evenings and sometimes all night long children are often left with indifferent adult supervision or are totally unattended. Years ago the founder and other members of New Light felt the need to provide a safe and secure shelter for the children of the community which resulted in the creation of a program that began with an evening creche. The same services today have been extended to all other programs under New Light which try to guarantee highest level of child safety and security.

New Light believes that whether one addresses healthcare, poverty, population control, unemployment or human rights, there's no better place to start than in the corridors of education. To shape a better tomorrow New Light's main aim is provide first class education to each and every child.  We all have to agree that the most important people and those who can make a difference are teachers.

An immense thank you for your generostity in helping New Light continue with their important work.

A Place for Children to Grow,Thrive and Be Safe 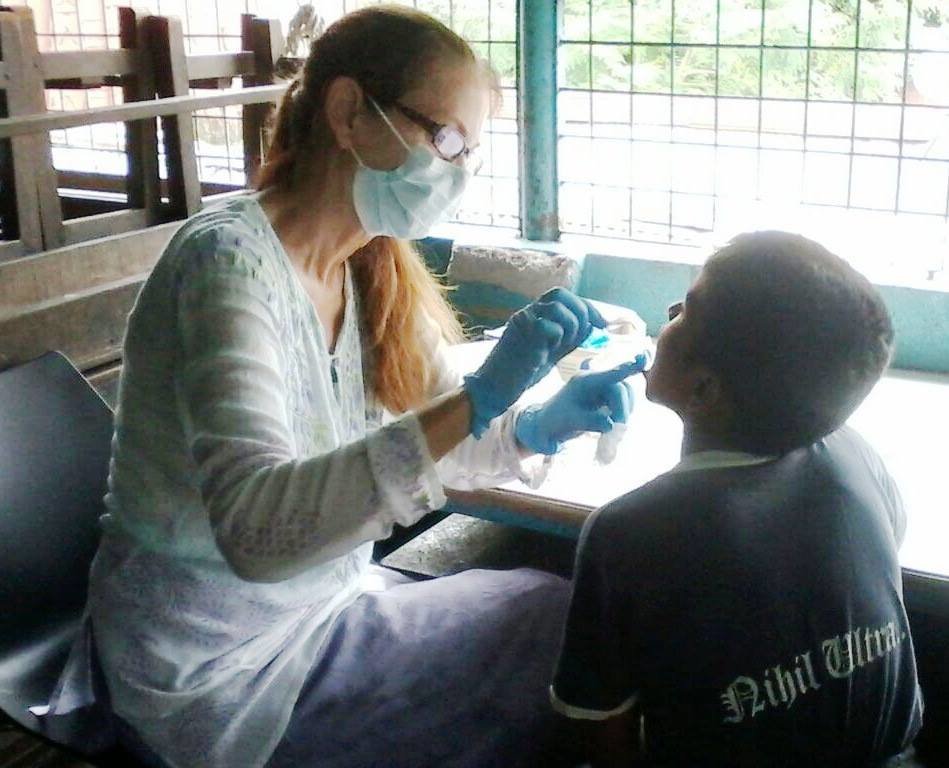 It's always a special day when I report about New Light. I can recount what progress is being made or just the importance of the everyday lessons that are learned at New Light for the children of the red light district.

Recently there has been an emphasis on talking about safety and one issue is fire safety. New Light put together with the help from a fire marshal an evacuation program and conducted a fire drill. The staff members and caregivers know the importance of preparing the children for the procedures and practices during a fire to ensure that all children and staff understand what they need to do if there is a fire. The first drill was a successful one - fast, systematic and structured. Fire can spread fast in these communities and we must make sure the children are safe.

Another importatn program that we have conducted is to teach oral hygiene. Good oral hygiene will generally help children with dental issues to be healthier and happier. We all know how a toothache can ruin our day but there are those who live day in and day out in pain. Since corrective dental care can be expensive, the caregivers make certain that the children are practicing good oral hygiene habits to keep their teeth clean and healthy.

The photo shoes a volunteer helping with brushing and flossing. We send volunteers to New Light so if you are interested in working at the shelter, please don't hesitate to contact me at shana@villagevolunteers.org. 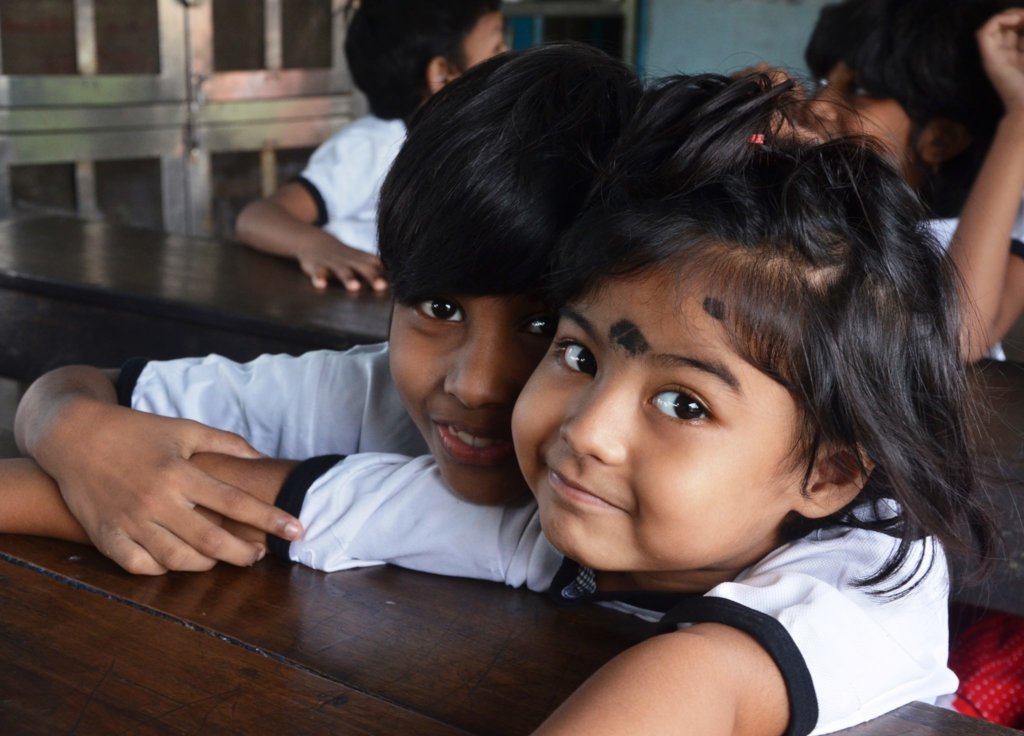 Project Leader:
Shana greene
Seattle, Washington United States
$14,686 raised of $20,000 goal
You last donated to this project on
285 donations
$5,314 to go
* Amounts in US Dollars
Donate Now
Donate once
Donate monthly
$15
USD
Books bag and shoes
›
$30
USD
School supplies for a year and a school uniform
›
$45
USD
Healthcare for one year
›
$75
USD
One year of primary and secondary school tuition
›
$250
USD
a year of vocational training or college
›
$400
USD
Sponsor education (tuition, uniforms, books, school supplies), nutrition, and healthcare for one year
›
$1,000
USD
Will contribute towards the construction of a new home for housing more at risk children. This fund has already raised $25,000 of the $75,000 neccesary for completion
›