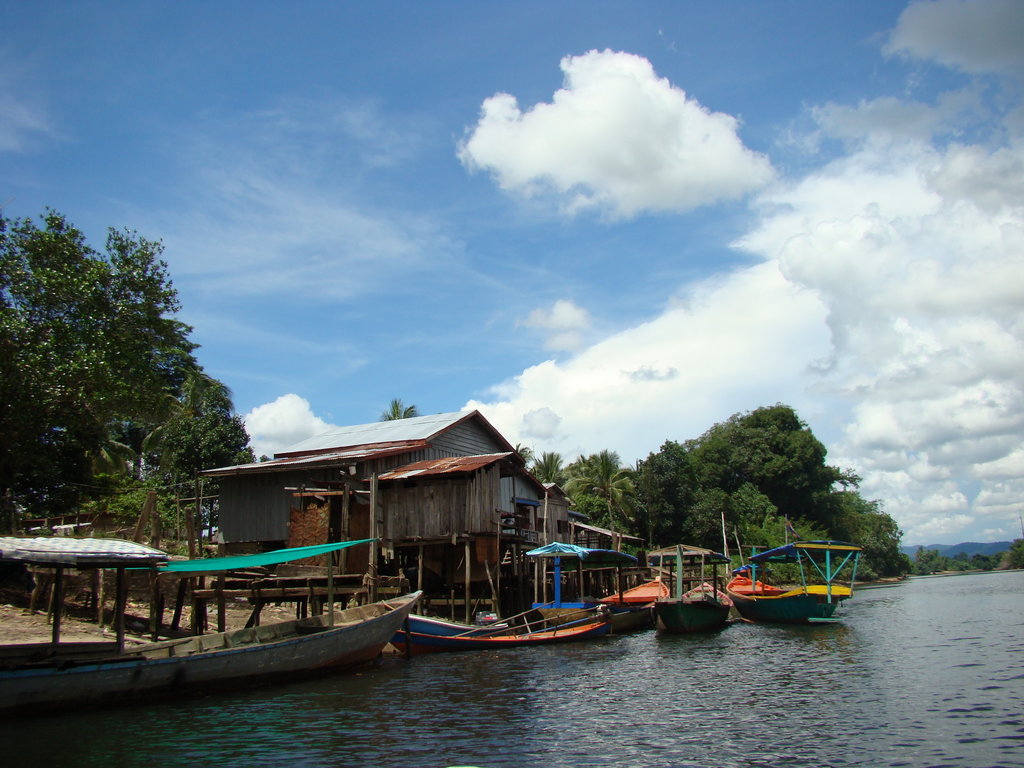 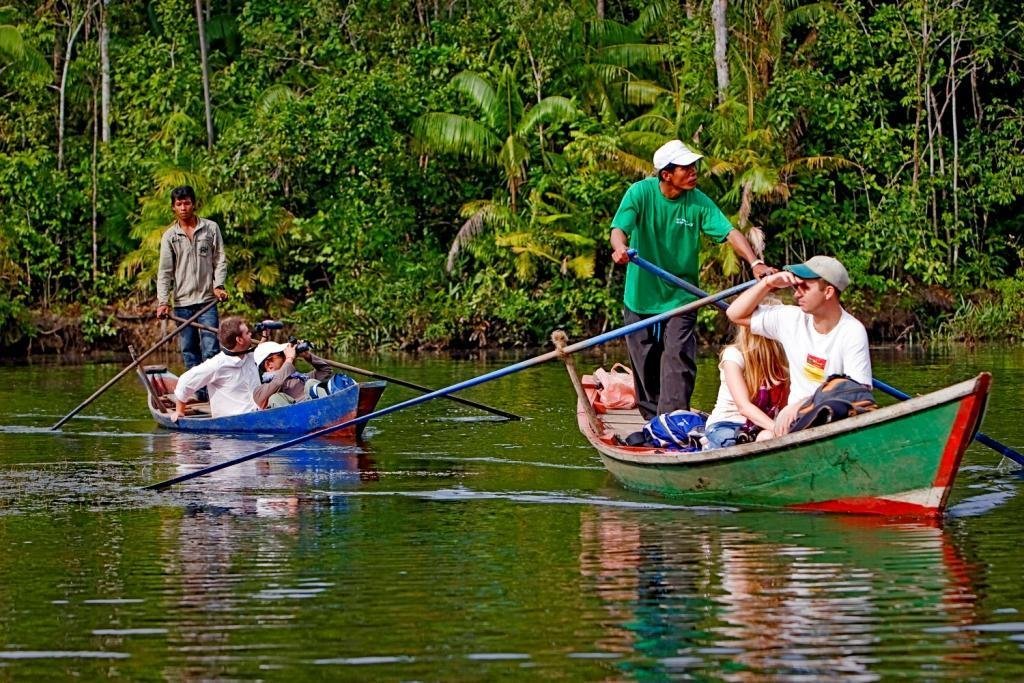 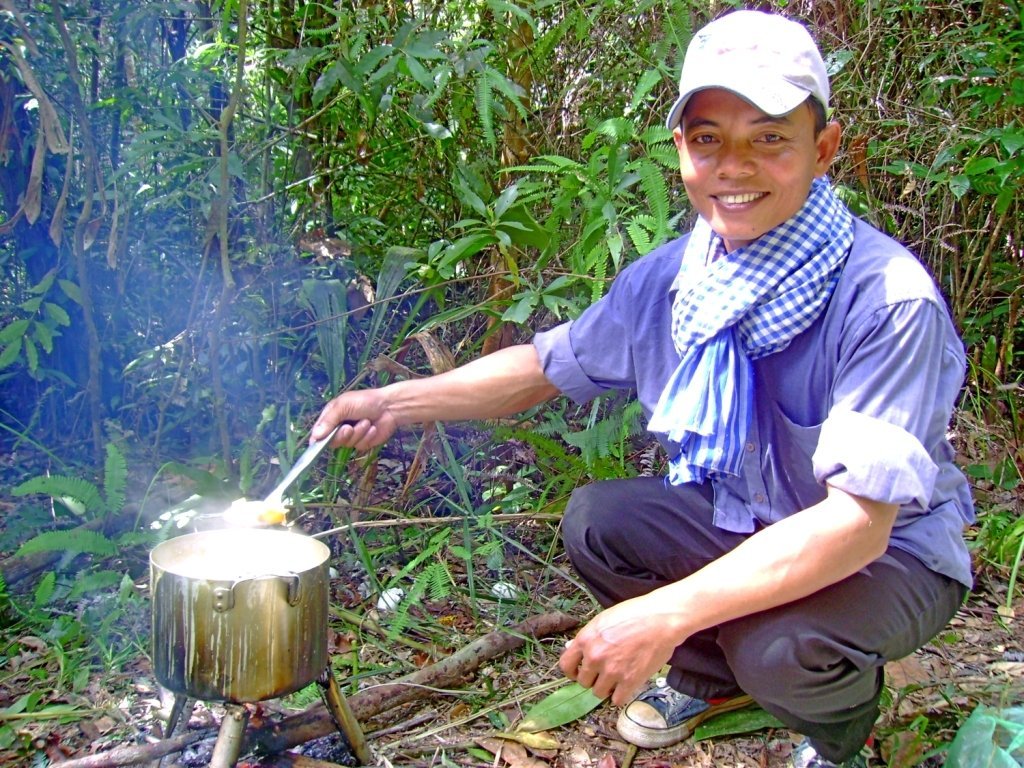 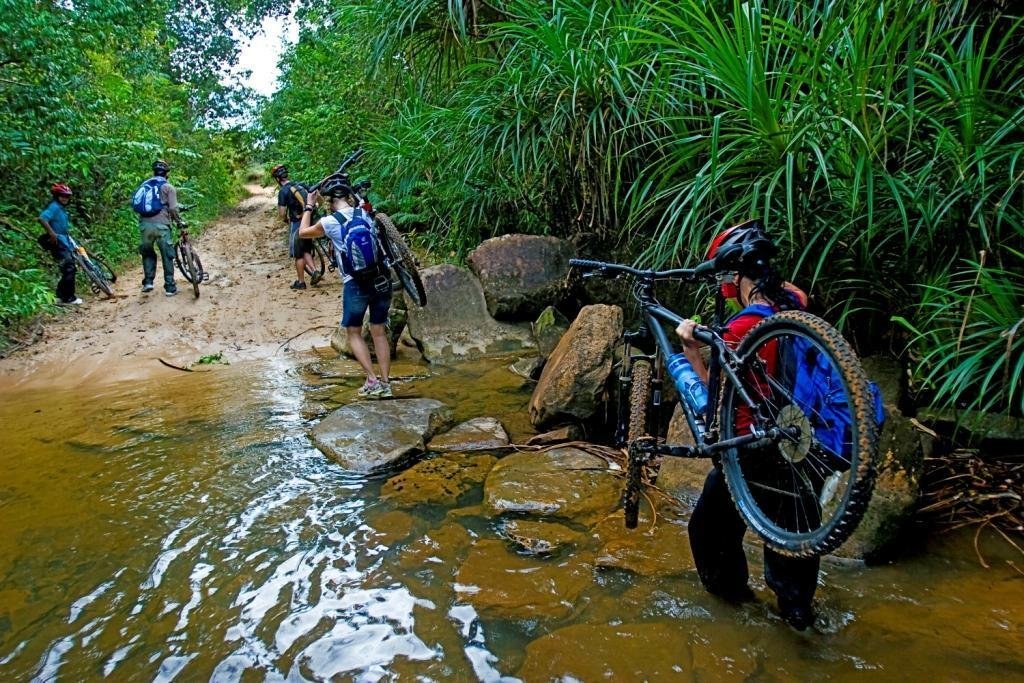 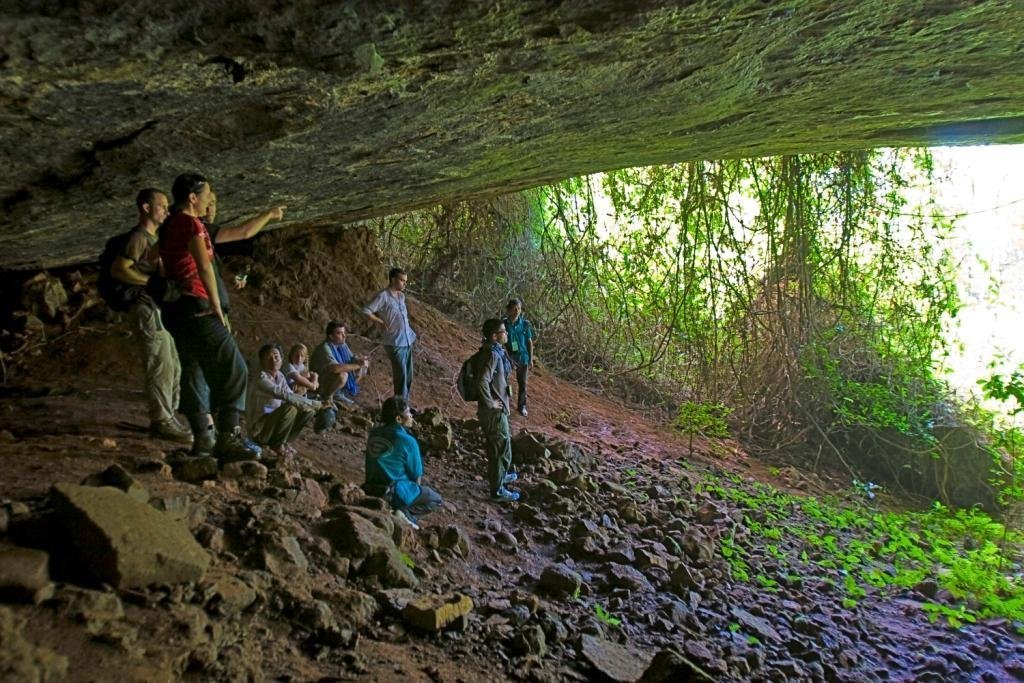 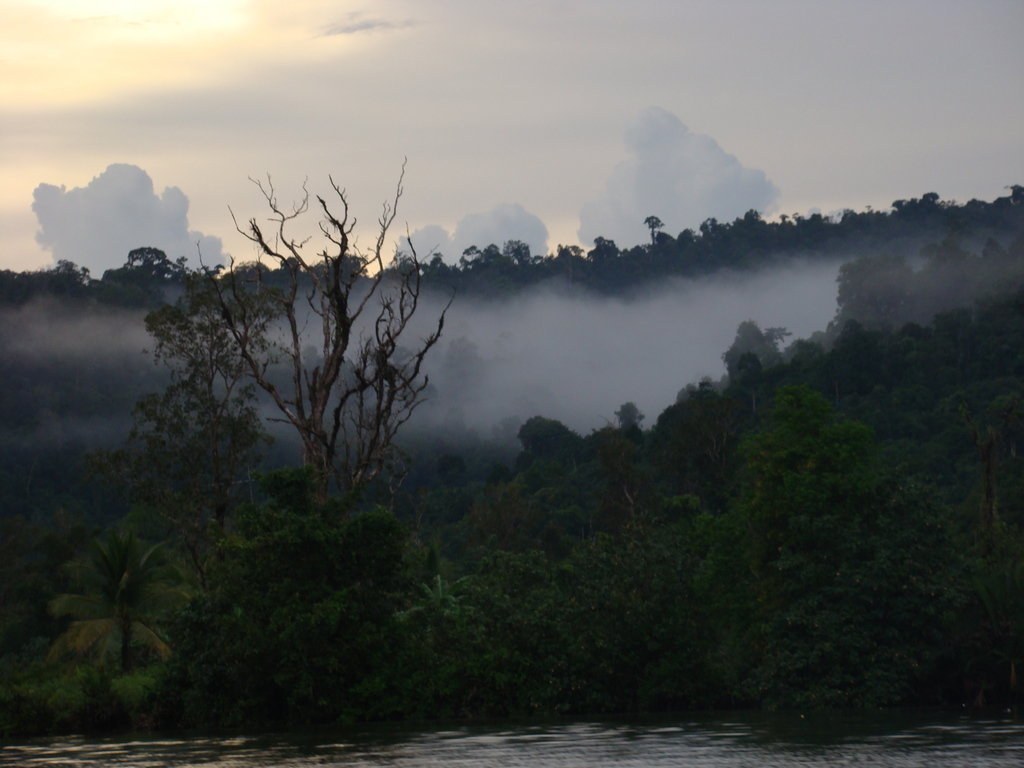 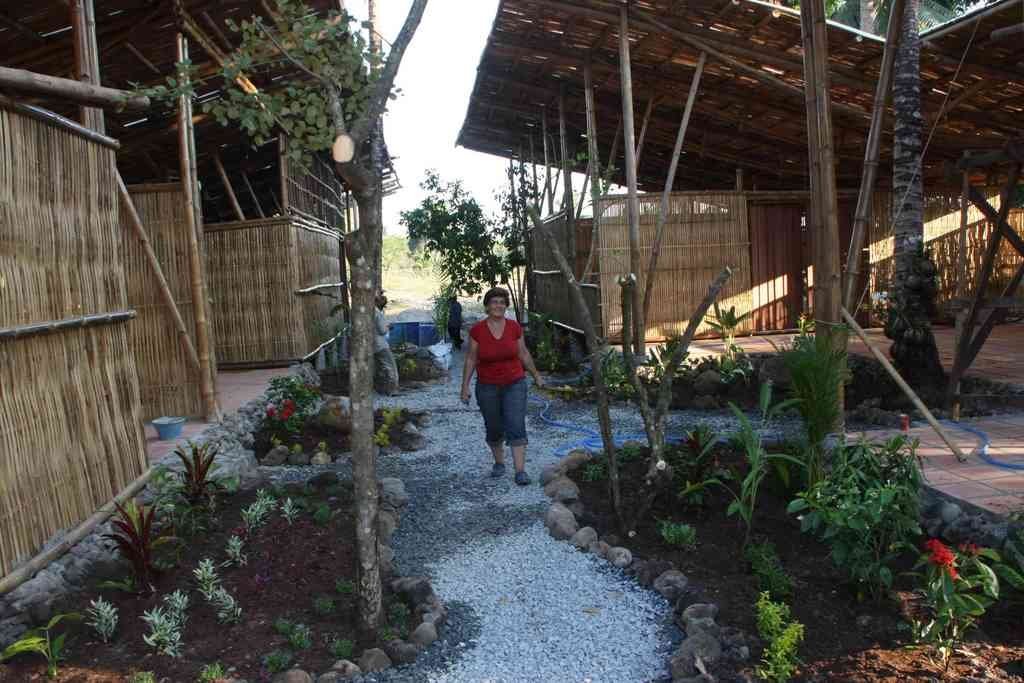 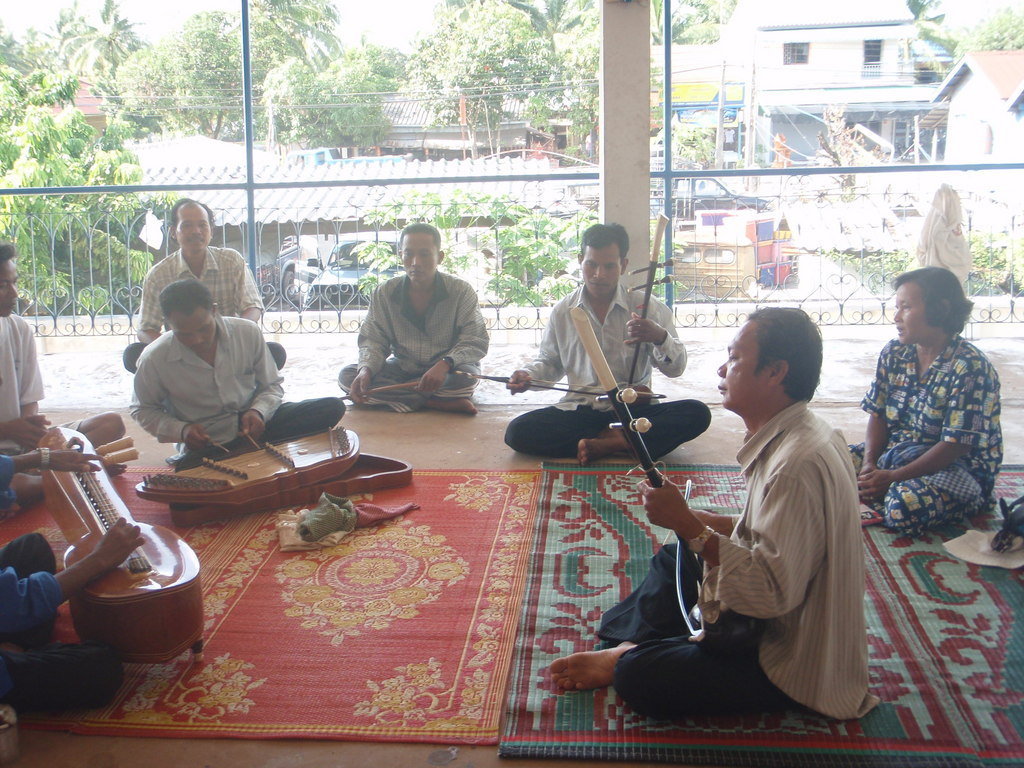 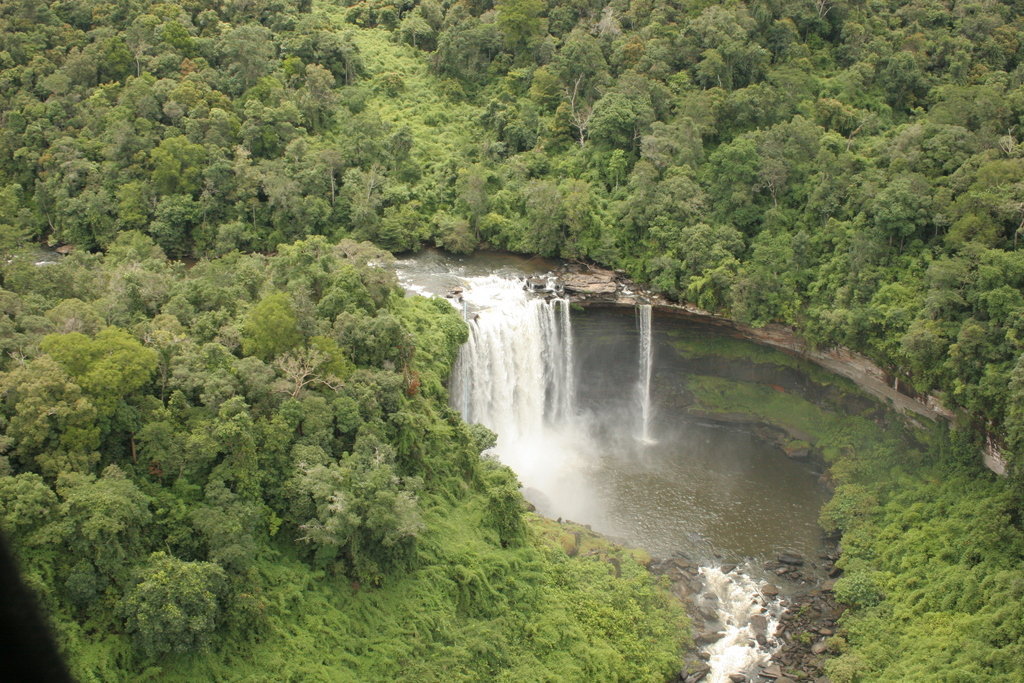 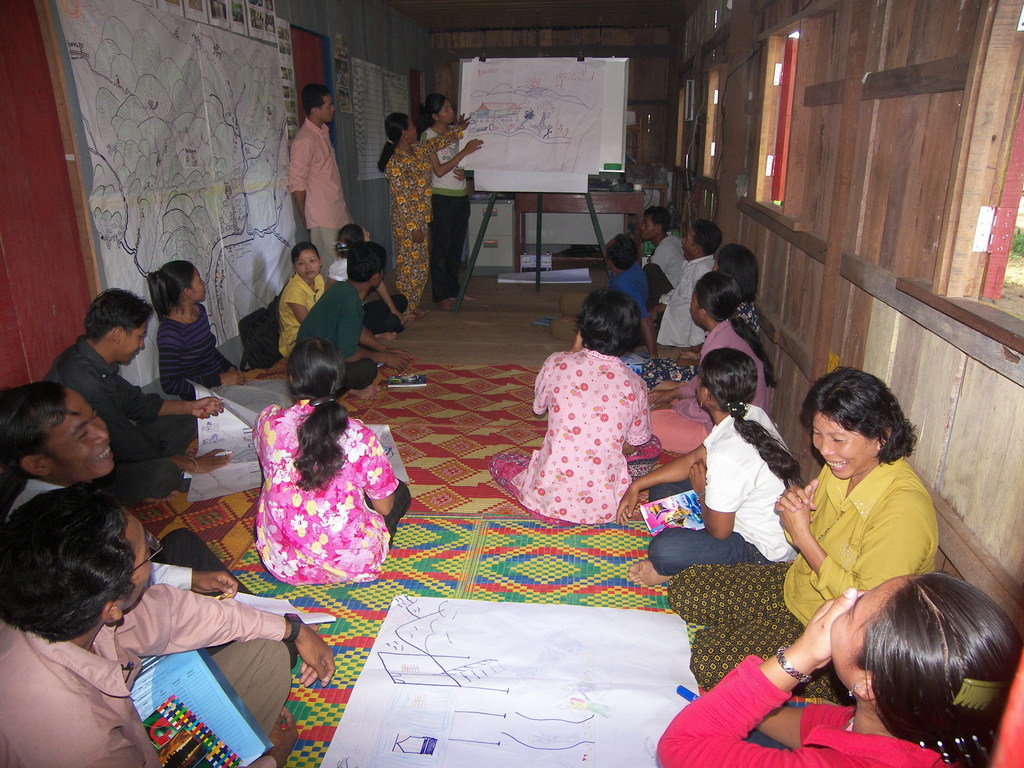 Wildlife Alliance’s Community-based Ecotourism Program (CBET) in the community of Chi Phat in Cambodia’s Koh Kong province has been a great success, with visitor numbers increasing substantially each year and major publications like the New York Times and the UK’s Guardian taking notice. Also paying attention to Chi Phat’s growth is the Cambodian Tourism Ministry who turned up recently with a delegation headed by Minister of Tourism Thong Khon.

Cambodian Tourism Minister Thong Khon is shown a display of the Chi Phat CBET by Wildlife Alliance CEO Suwanna Gauntlett during the minister’s recent visit to Chi Phat.The minister was presided over the opening ceremony for the Chi Phat CBET in 2008 and was returning to see the progress that had been made since that time. He toured the village, spoke with guesthouse owners and local entrepreneurs, and even went out on a nighttime prawn hunt along the river. Addressing a crowd of CBET members, the Minister praised Chi Phat, calling it a model for community-based ecotourism in Cambodia.

Following his tour, the Minister was kind enough to sit down for a short interview with Wildlife Alliance communications officer John Maloy to share his thoughts on Chi Phat and the future of ecotourism in Cambodia:

Why have you decided to visit Chi Phat?

What is special about Koh Kong province that makes it an attractive destination for tourists?

So like I mentioned in the meeting earlier this morning, we have ecotourism potential not only in the Southwest [of Cambodia, where Koh Kong province is located] but also in the Northeast and other areas…. Koh Kong, and especially Chi Phat, has been supported by Wildlife Alliance, who have assisted the government to develop [the province]. Also [Koh Kong] lies along the coastline of Cambodia, and our bays have just been recognized as some of the most beautiful bays in the world. Cambodia has now become a full member of the Club des Plus Belles Baies du Monde—the Most Beautiful Bays in the World Club.

So Koh Kong’s bays are a most beautiful area and they directly connect to the forests of the Cardamom Mountains. That’s why Koh Kong is an important area for sustainable tourism development, just like in the Northeast. And obviously I was overjoyed and enthusiastic about the government’s decision to halt the operation of the titanium mine which could have affected Chi Phat. Our biggest concern over the ecotourism potential [of Chi Phat] is now gone. This outcome was the result of our leader Prime Minister Hun Sen who made a wise decision focusing on the effects [of the mine] on generations to come.

How important is ecotourism to the tourism development plans of your ministry?

Ecotourism is a sustainable form of tourism that can also have an impact in combating global warming. Recently it has become obvious that ecotourism is playing a vital role in poverty alleviation at the community level….

Ecotourism is a form of tourism that combines economy and ecology. So when people benefit from tourism they will continue to support these efforts and will protect and conserve our natural resources in and around their community. For instance, in Chi Phat there is no more wildlife hunting or illegal logging and former illegal hunters have new jobs. So in Cambodia ecotourism is key to sustainable development.

Tourism Minister Thong Khon speaks with a shopkeeper as he tours the village of Chi Phat, which he called a “model” for community-based ecotourism in Cambodia.The government focuses on ecotourism in two forms: small-scale and large-scale. Small-scale means ecotourism developed within a community. To be successful these communities must have the four “P’s”: (1) Public [Sector]; (2) People; (3) the Private Sector; and (4) Partnership…. Chi Phat has the four P’s so it is in a position to promote itself as a viable CBET. You can see through the development of the local businesses in Chi Phat the interrelationship between the local community, the park [i.e. the surrounding forest], and the tourists.

By large-scale we refer to developments along the beach or in potential ecotourism areas that utilize high-end technology. By high-end technology I refer to the use of methods or devices that enable environment sustainability. Tatai [in Koh Kong province] is one such key place that uses high-end technology developed in Australia and we are looking to make use of the same form in Ream [National Park in Sihanoukville] and also on Koh Sangsa island [off of Sihanoukville] which is being developed by Australian investors. So we appeal to all investors and developers [operating] at beach and ecotourism sites to utilize very good partners and designs, particularly architectural designs, in order to avoid negative environmental impacts.

Can you give some examples of the high-end technology you are talking about?

One particular investor, for example, has operated in Malaysia, using advanced designs to attract upscale tourists. The practices used in Malaysia will be applied in Cambodia…. [Here the minister showed off some artist renderings of upscale ecotourism sites now in development in Cambodia. The technology he was speaking of was primarily in terms of design, creating high-end resorts that, for example, would be build around trees rather than clearing them or that found innovative ways to incorporate natural materials and surroundings. “This is made of bamboo,” he said of the intricate elevated bungalows at one proposed resort, “and not a single tree will been cut.” The idea in all these future sites is to reduce the footprint left by the resort on the surrounding forest or coastline. “Cambodia will be a paradise,” the minister said of these high-end developments.]

But these lessons can also be applied to small-scale community projects. REDD [the UN’s carbon credits program] will become an important means for generating revenue through the protection of natural resources. Communities can incorporate green energy sources such as wind power or solar panel systems. Even the boats used for prawn fishing [in Chi Phat] could use solar systems to power their lights at night….

How important is Chi Phat to the Ministry of Tourism’s plans?

It is wonderful to see in coming here that there has been much progress since my last visit. This development is one that can be said to be proceeding in a sustainable and responsible manner. This can be attributed in part to the equitable division of revenues. When you have equitable sharing the community will participate. We already spoke with people here and they have told us they are happy to participate in ecotourism—and before there were only 160 participants but now there are over 200. It’s like the CPP [the ruling party of Cambodia, to which the minister belongs], which started out with only 60 people and now has 5 million [members]. People respond when you do things the right way, when you have the right policy. More and more people will participate in this project. It is a clean village and an excellent tourist destination….

To promote Chi Phat among Cambodians, the Ministry of Tourism has commissioned a song to be written about the natural beauty of the area. These performers accompanied the minister to Chi Phat for the filming of the song’s karaoke video, which will be distributed across the country.It is much nicer, and even more beautiful [in Chi Phat] now than when I last came. And now you also have the Sothoun Island Ecolodge which is a beautiful addition. And now that the threat of the titanium mine has been removed we hope that it will allow the ecolodge project on the river to continue [construction was halted on this project last year after the titanium mine was announced]. We know that investors were concerned about the mine, but now that the concern is gone we hope it can continue. And as I said, there has been obvious progress in lifestyle improvement in the community and it is positive to see more members of the community joining the project. The project enjoys the support of the community and obviously they love Wildlife Alliance.

[The Ministry] will continue its support and we must continue our cooperation. I love Nature. I came from a poor family and Nature helped me; now I want to help Nature. 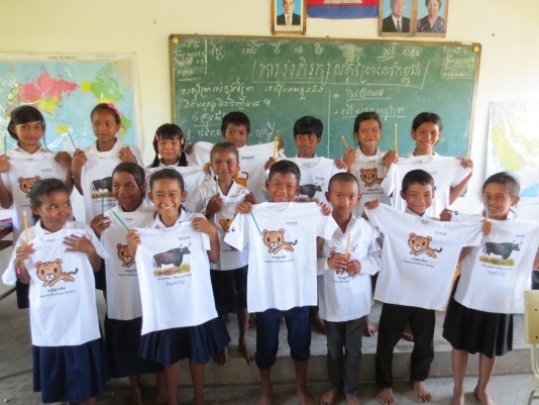 Raise Awareness to Protect Wildlife in Cambodia
Find a Project

GlobalGiving
Guarantee
Donate https://www.globalgiving.org/dy/cart/view/gg.html?cmd=addItem&projid=4606&rf=microdata&frequency=ONCE&amount=25
Please Note
WARNING: Javascript is currently disabled or is not available in your browser. GlobalGiving makes extensive use of Javascript and will not function properly with Javascript disabled. Please enable Javascript and refresh this page.