Deliver solar ambulances to save lives in Namibia 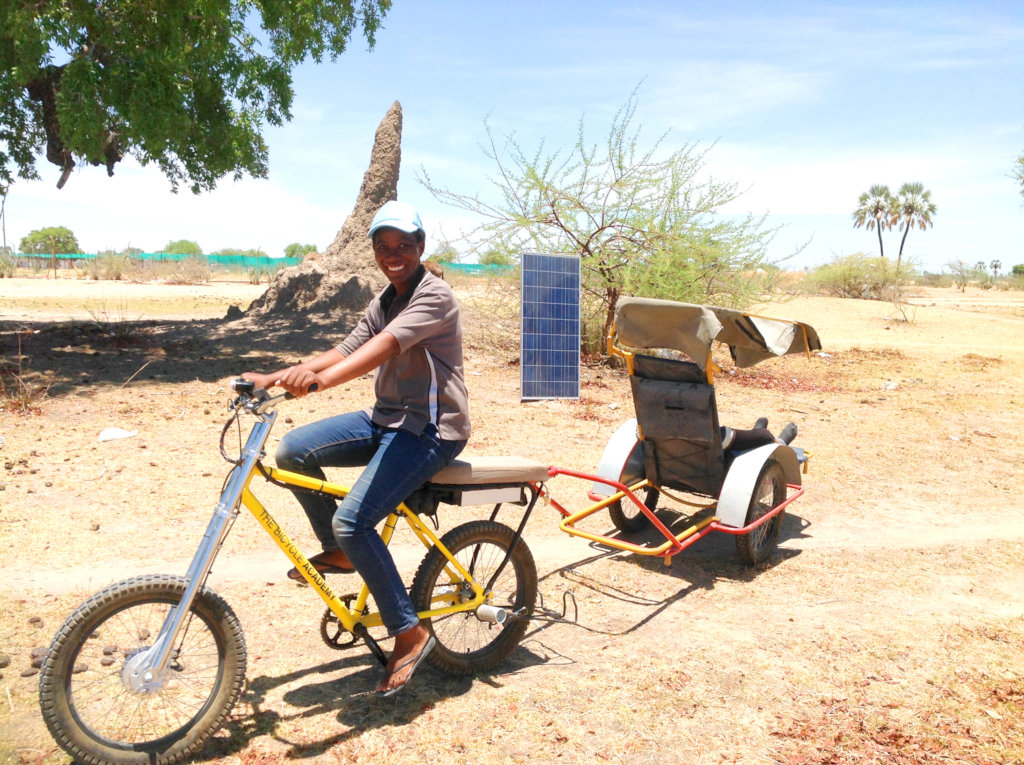 The light at the end of the tunnel

We've told you a bit about our production frustrations this year, and the past two months have seen more challenges with getting our latest batch of ambulances on the road. Unfortunately not all of the necessary components have been delivered by our suppliers to make the ambulances completely functional, and we're still awaiting delivery of the solar charging systems. We also received all of the custom wheels, only to discover that they didn't fit in dropouts (wheel axel brackets) that our supplier had manufactured, so these have required adaptation.

We're really almost there now, and our suppliers have promised us that we will still be able to deliver a batch of 10 ambulances before the end of this year.

We'd like to thank you for your ongoing support and your patience. The solar electric ambulance project is taking a lot longer to grow wings than our pedal only version, and has been one of the more challenging projects we've undertaken in the past 15 years. We are still confident that it will grow with time to match the scale of our original ambulance project, which delivered 120 vehicles.

We'll be sending a special report to our supporters as soon as the first deliveries are made, and look forward to a successful year of growth for the project in 2020. 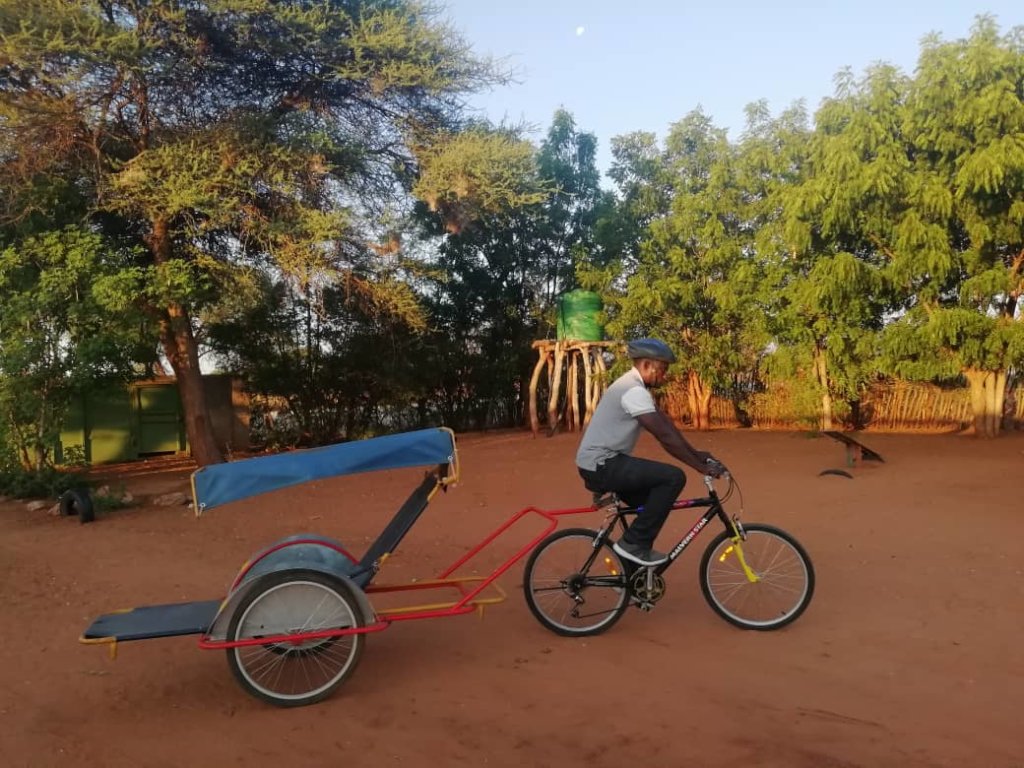 We have been quiet about progress with our next batch of solar electric ambulance deliveries recently, and that's because we're a little embarrassed about being behind on delivery. We have switched to a new supplier for the manufacture of the ambulances, and some of the detail on the fabrication has taken a lot of back and forth to sort out.

At the same time, a shipment of motors, control equipment and solar charging gear has taken an eternity to leave China. Happily, it finally shipped last Friday and we're hopeful that it will arrive in port by mid-July, when we will also have the last details of the ambulance manufacturing ironed out.

Despite these challenges, we haven't been idle with project planning. In finalising locations for these and other e-ambulances, we have been monitoring some of the older pedal-only ambulances. We've been glad to find that even years after we ended that programme, there are still ambulances in use that are making a difference. Paulus Shamate, the founder of the Shikenge Child Support Centre, received an ambulance in 2009. Paulus reports that the ambulance is still in regular use, taking sick people from the community of Shikenge village to the nearest clinic, 10km away. As is clear from the photo Paulus shared with us, the ambulance is still in immaculate condition due to careful care and maintenance.

While the pedal-only ambulance has more than proved its worth in transporting patients from pregnant women to children with malaria, the 10km trip is tiring for the operator. There are also occasions when the clinic is closed and the hospital is the best option, but the 30km trip is beyond the practical limits of a pedal-only ambulance.

Given Paulus's sterling record of maintaining his first ambulance and long history of use, we have agreed to send him a new solar electric bicycle ambulance when our next batch is complete. This will mean quicker trips to the clinic, and also that the trip to the hospital is no longer out of the question.

As always, thank you for your continued support for our project, your contributions and your faith in our work means a great deal to me and the rest of our team. 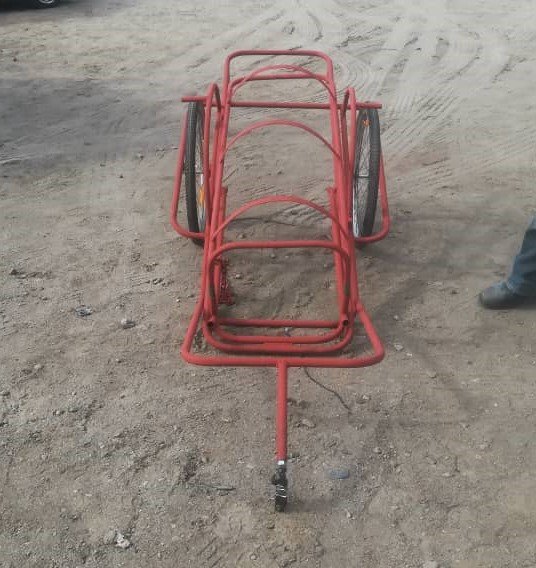 A no-frills photo of the first in our next batch

We're really pleased to report that, with your help, we are ready to expand our solar ambulance project. You've helped us keep our project alive this past year, and maintained our existing ambulances in the field to help us improve both the design of the ambulances and our implementation process.

The project has caught the attention of a new supporter, the Kulczyk Foundation from Poland. With their support, we're now in the process of manufacturing ten more solar electric ambulances. These will be rolling out in the north-eastern Zambezi Region, in partnership with our bicycle shop network, our local partner Catholic AIDS Action, and the Zambezi regional council.

The first ambulance and stretcher frame from this batch rolled off the factory floor on Wednesday. We haven't had time for a glamour photo shoot, but would like to share the 'before' image. The next time you see it, this ambulance will have its fabric stretcher and roof fitted, galvanised steel mud-guards in place, and will be towed by a Suncycles Namibia e-bike, charged with solar energy. It will be piloted by a healthcare volunteer, and will be used to bring people from isolated communities to the nearest healthcare facility.

We wish you a happy and healthy 2019, and thank you for your kindness in bringing health and happiness to people in rural Namibia.

Reaching the far corners of Namibia 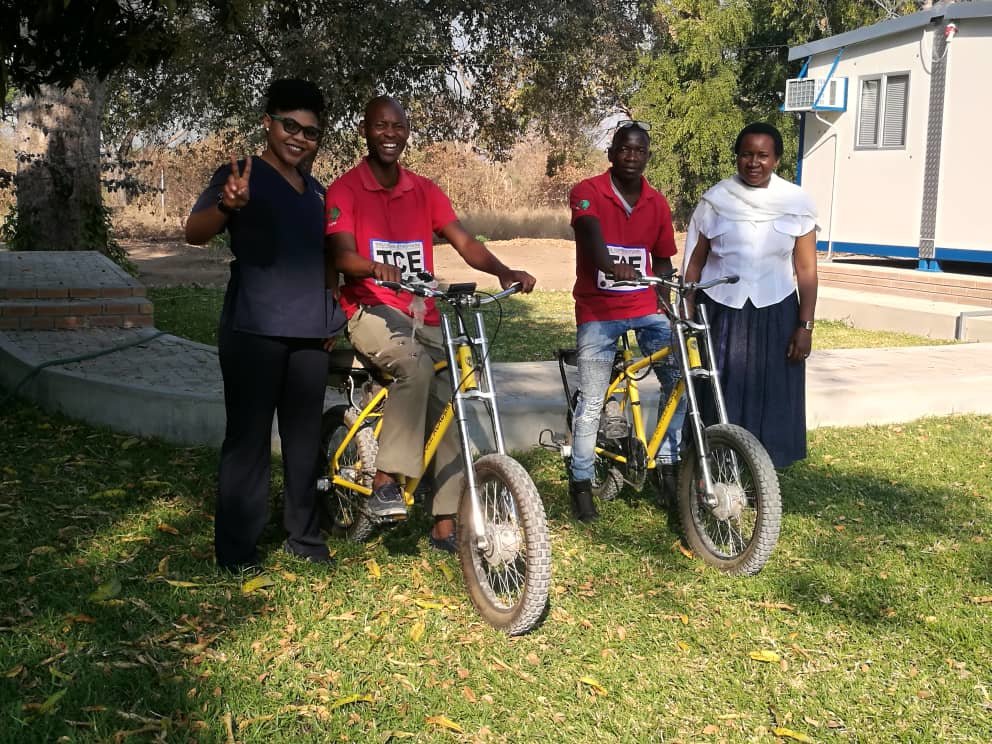 o b I like your bike project" came the Facebook message. "Kudos". Every so often Facebook is good for something other than cat pics, and Sister Lumba Maswahu's appearance was one such occasion. Thinking that she was just dropping in to pay a compliment to a local NGO, she didn't imagine that she'd soon be roped in to participating in one of our projects, and we were equally surprised to learn about the innovative health programme she and a group of her peers have put together in the Zambezi region to support people living with HIV/AIDS in some of Namibia's most remote villages.

Sister Maswahu and a small team of nurses contracted by the Centres for Disease Control to provide support to government anti-retroviral treatment initiatives . The nurses, along with community health volunteers, have initiated a programme called Community Adherence Clubs (CACs). Each CAC comprises 7-12 people who are HIV positive, with a low viral load. Groups are formally registered at the nearest health facility, and members can nominate one group member to collect medication for the rest of the group, reducing both the risk of any individual defaulting through non-collection of medication, and health facility staff workload by reducing the time spent administering each patient. The CACs have proven very successful and have spread throughout the region, with several hundred members.

Like most health outreach programmes in remote parts of Namibia, CAC team members are commonly called upon to perform work that's outside of their brief. CAC members are often confronted with the difficulties of community members struggling to find transport to and from health facitliies--just the kind of context our e-ambulances were designed for.

After several weeks communicating with Sister Maswahu and her team, and of them talking to CAC members, we decided to allocate two ambulances to the programme for testing.

The CAC members who will be responsible for the ambulances just received them, and have been learning how to ride and control an e-bike. In the next weeks they will be carrying patients and open up parts of the country to an emergency medical transport system for the first time ever.

We hope by our next report to share their stories.

We thank you once again for your support in helping us bring the e-ambulance project to life. 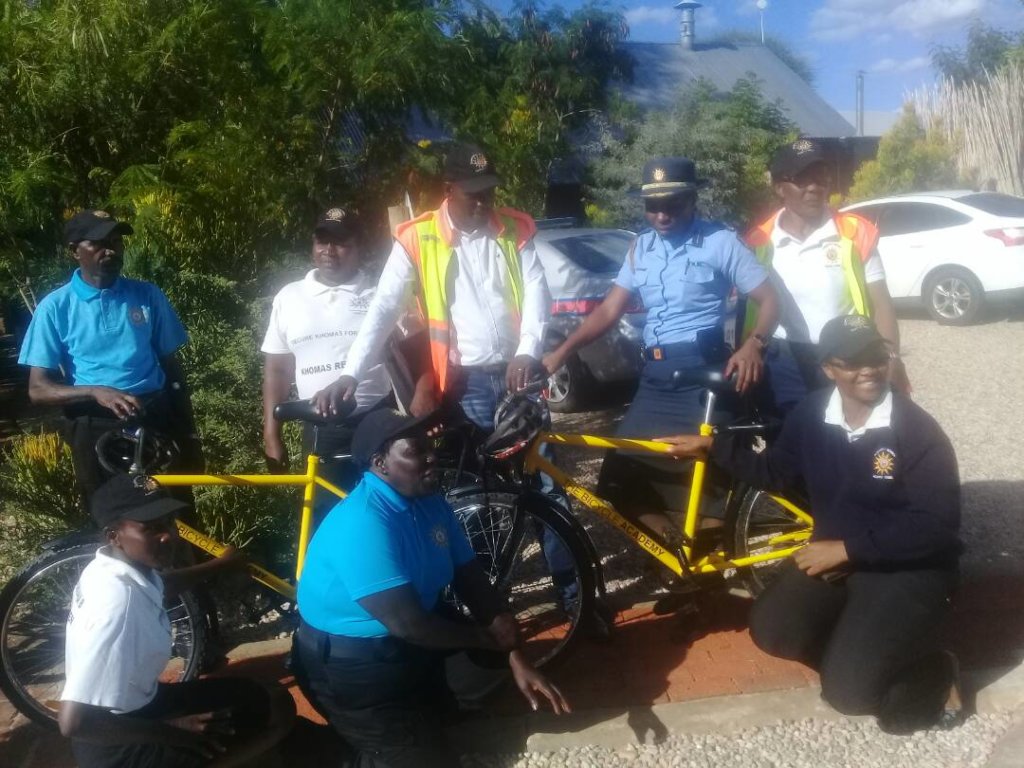 The solar ambulance project has been given a boost with a new partnership. The neighbourhood watch movement has grown enormously in the past five years, with thousands of volunteers providing support in their communities. These volunteers patrol areas that are prone to crime, and are particularly focussed on safety for women and children. Due to their presence and status in the community, these volunteers are often called on for other kinds of support, including during medical emergencies.

Our partnership with the neighbourhood watch movement, which is coordinated by the Namibian Police, began last month with a donation of 29 bicycles to help community patrols extend their range. We have also put the first two electric bicycle ambulances under the care of the neighbourhood watch movement, and are looking forward to seeing the results.

The partnership addresses one of our main challenges with our previous work with (non-motorised) bicycle ambulances, which is community management. We relied on small community groups to manage the ambulances, and this was problematic in terms of resources to provide maintenance, addressing management issues, and monitoring and reporting on use.

We're hopeful that through the Neighbourhood Watch movement, and the enthusiasm we've seen from the Namibian Police, the bicycle ambulances will now reach further into Namibian communities, and be better managed even in the most far-flung locations. 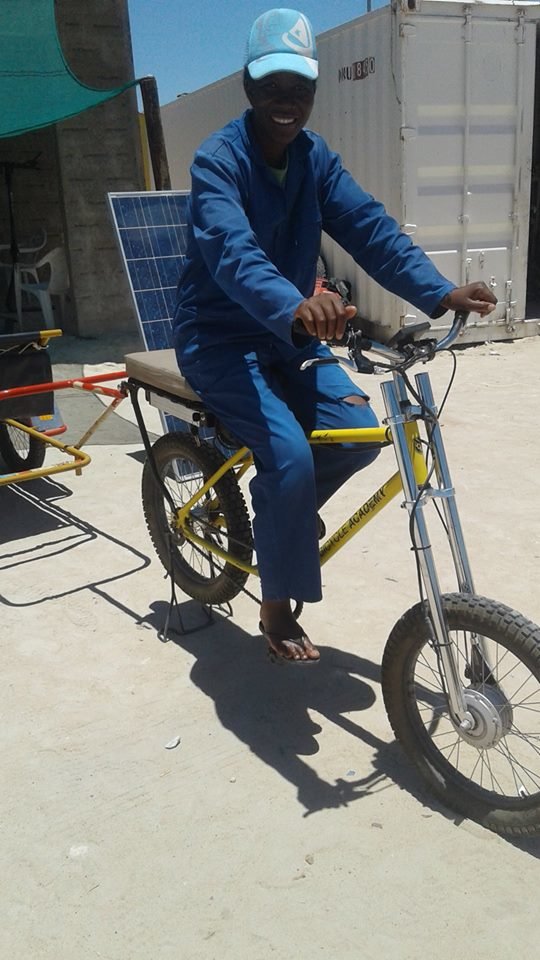 An ambulance comes in for a service in Outapi
Attachments:

Find another project in Namibia or in Physical Health that needs your help.
Find a Project

GlobalGiving
Guarantee
Donate https://www.globalgiving.org/dy/cart/view/gg.html?cmd=addItem&projid=30763&rf=microdata&frequency=ONCE&amount=25
Please Note
WARNING: Javascript is currently disabled or is not available in your browser. GlobalGiving makes extensive use of Javascript and will not function properly with Javascript disabled. Please enable Javascript and refresh this page.