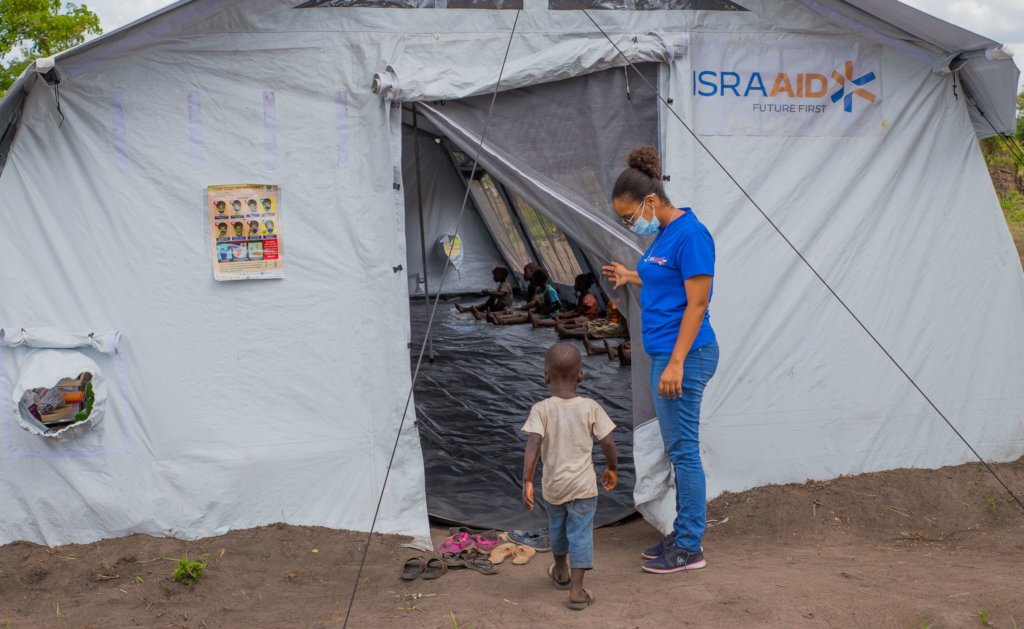 Over 2,500 families are creating a new home in Guara-Guara, Mozambique after being displaced in January when Cyclone Eloise destroyed thousands of buildings and livelihoods. IsraAID Mozambique opened a new Child Friendly Space in Guara-Guara where activities include dancing and art to help children process their trauma.

"We suffered a lot from the cyclones and floods when we left Buzi. We were rescued by boat to the high school of Guara-Guara where we were resettled. We are receiving help from the government with food up to today. We lost almost everything. Being a volunteer facilitator with IsraAID is important for me because, after everything that happened, we can still bring joy to the children. Wherever I go the children call me: “Look, the auntie from our little school” and it makes me very happy." - Sonia, a volunteer at our CFS in Mozambique.

Luisa currently lives in Guara-Guara, after her house in Buzi village was destroyed by flooding and the cyclone. "I took refuge in a neighbor's house. The next day everything was flooded. We left by boat to Guara-Guara. Life is difficult. When the coronavirus arrived we felt safer in our own homes. Now that we are here it is different. Although we are wearing masks and washing our hands, there are 10 families in a tent."

Hear their stories in our video. 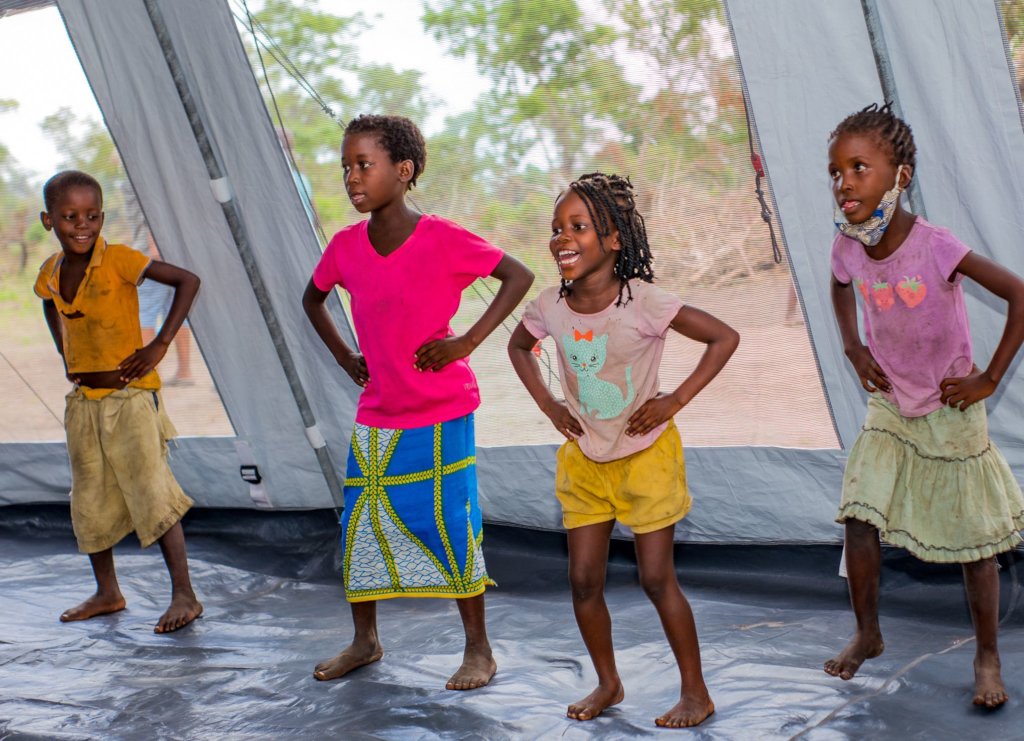 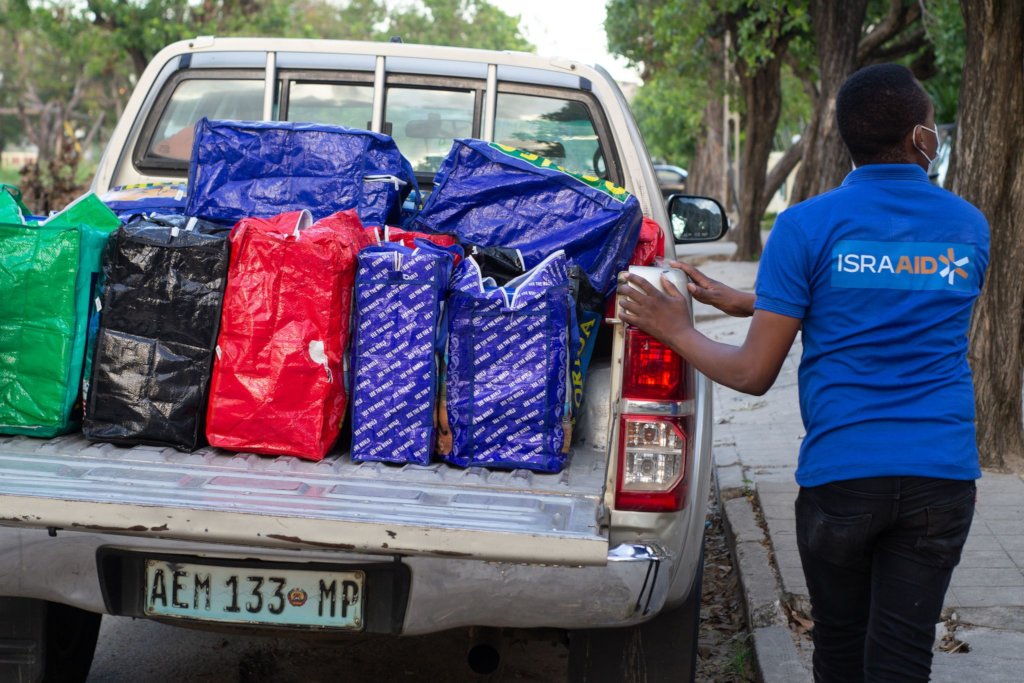 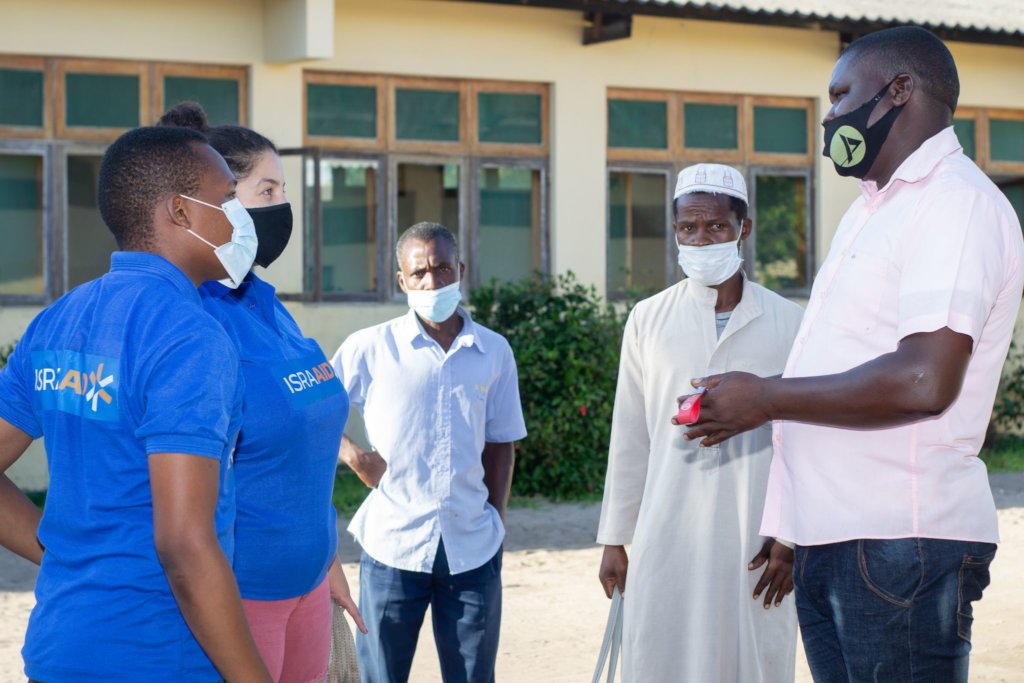 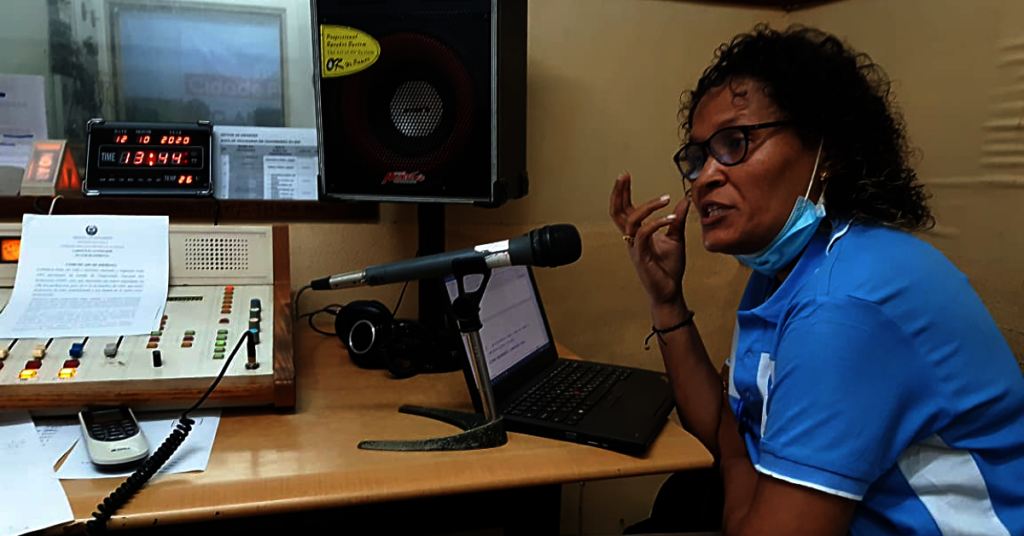 In Mozambique, where communities are still working to overcome the destruction caused by Cyclone Idai, which displaced thousands and severely damaged hygiene and sanitation infrastructure, people are at high risk for the rapid spread of disease. This could cause a secondary crisis and exacerbate humanitarian aid efforts. IsraAID first arrived in Mozambique following Cyclone Idai in March 2019. Since then, IsraAID has worked in the sectors of Water, Sanitation, and Hygiene (WASH); Child Protection; Psychosocial Support (PSS); Medical Care; and Disaster Risk Reduction to support emergency response efforts toward building back better.

IsraAID is implementing long-term, sustainable projects to bolster psychosocial support within the education system in Sofala Province and increase community resilience toward future crises. Amid the COVID-19 pandemic, the IsraAID team launched distribution campaigns to support program continuity despite the shutdown, seeking to provide school children and their families with basic hygiene supplies, information about preventing the spread of COVID-19, and resilience kits, to compensate for the ongoing gap in psychosocial support services in these communities.

We are working with its partners in Mozambique including the Ministry of Education to outfit schools across Sofala Province with adequate facilities to ensure that children can go back to school safely. In addition, our teams are providing basic equipment and curricular materials to help teachers integrate hygiene into the classroom setting.

In October, in partnership with Radio of Mozambique, we launched a series of live radio programs and developed 1-minute spot-stories, for both children and adults, as part of its response to COVID-19 pandemic side effects. The program is broadcasted live weekly in Portuguese with Kalida, our senior psychosocial support (PSS) officer, in the studio providing feedback and engaging in conversations with listeners who call to present their questions, doubts and fears.The program is then translated into the two main provincial languages, Ndau and Sena, to be broadcasted also twice a week. The spot-stories is a creative piece of work between IsraAID and the writers of Radio of Mozambique, who turn relevant PSS content into spots that both capture children and adults.

By partnering up with the Radio of Mozambique and embracing the local languages of the province, this program and the spot-stories have the potential to reach more than two million people in the Province of Sofala. The contents are also available for free to the local community radios. So far, 3 of the 6 planned programs have been broadcasted, discussing COVID-19, Stress and Stigma. The content of the radio show was developed by the Mozambique PSS team together with other Protection specialists. 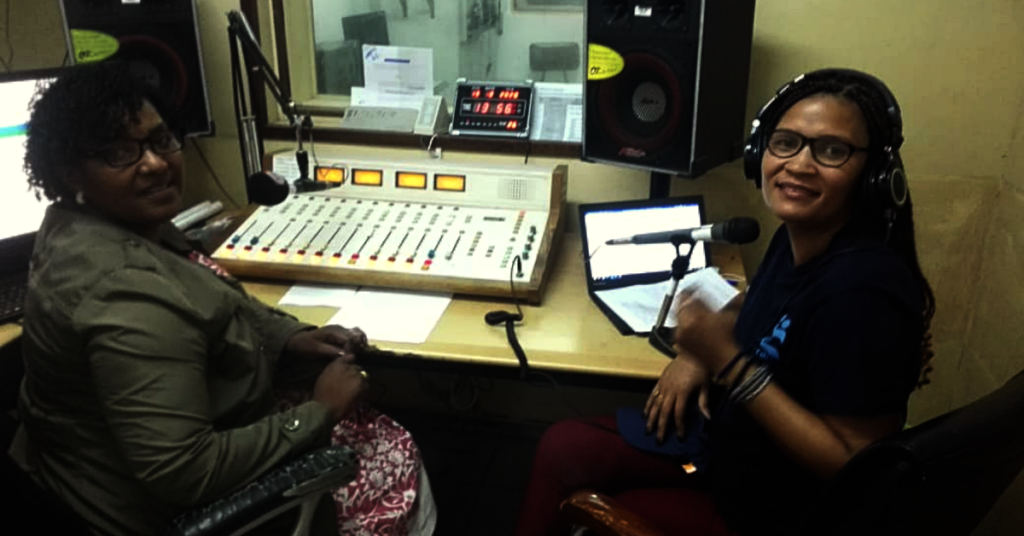 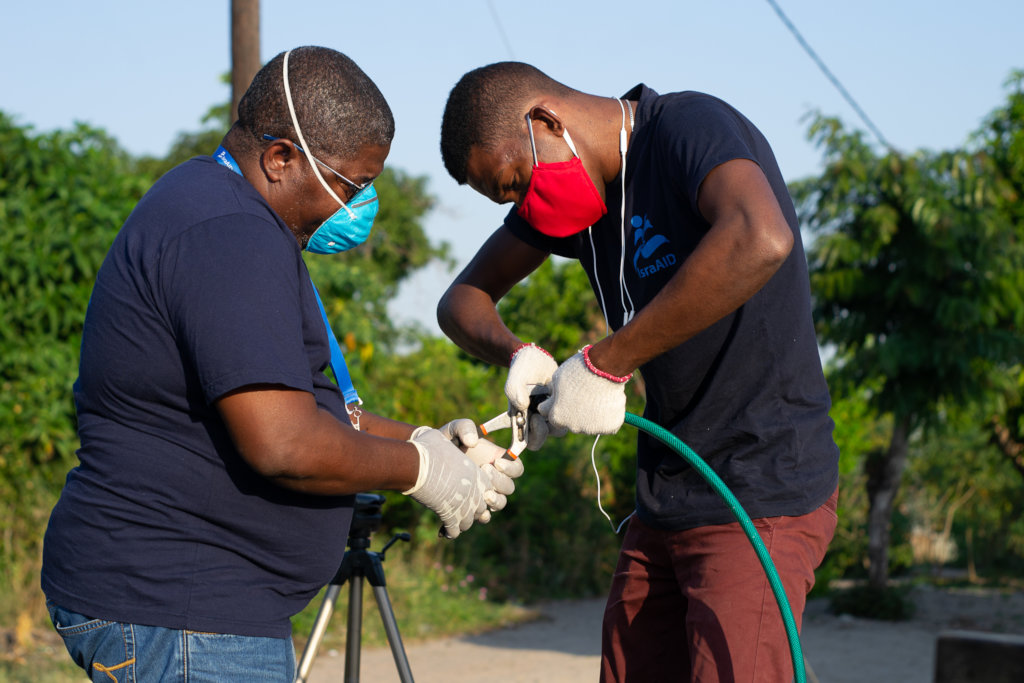 As the COVID-19 virus continues to spread around the world, having access to hygiene supplies and handwashing facilities has become increasingly important, but for some of the most vulnerable communities, the lack of safe water poses an additional threat during an already challenging time.

Following Cyclone Idai in 2019, many communities in Mozambique were still without access to safe water. The cyclone impacted hundreds of thousands of people, many of whom have not yet returned to a life that they can consider 'normal'. They were still in the midst of recovering from one crisis, when another crisis - the COVID-19 pandemic - arrived in Mozambique in March.

We are working to provide access to safe water in different communities, to minimize the spread of COVID-19, as well as any other disease that can be prevented with good hygiene practices. IsraAID Mozambique's WASH (Water, Sanitation and Hygiene) team is deploying water solutions to health facilities in Beira. We are distributing NUF water filtration systems which are designed to produce up to 500 liters of clean drinking water per hour in places that do not have permanent access to electricity. This quantity can provide enough water on a daily basis for a community of several hundred people. We are continuing to work with the local authorities to determine optimal locations to install more systems.

Access to safe water and hygiene supplies is often the difference between contracting a number of viruses, or not. This is why we are not only installing systems that provide access to safe water, we are also distributing soap, providing training for key members of the community, and promoting good hygiene practices through a number of channels. We have been adapting our usual psychosocial (PSS) training that we operate for teachers, bringing soap, buckets and water purification supplies to every session, as well as focusing on how to promote a healthy school and classroom. We have also been distributing activity kits to people's homes, and broadcasting information on PSS for adults and storytelling on PSS for children over the radio, allowing us to continue - albeit adapted - our psychosocial support to children, even when we are not able to physically meet in school.

Thank you for your continued support during the pandemic. 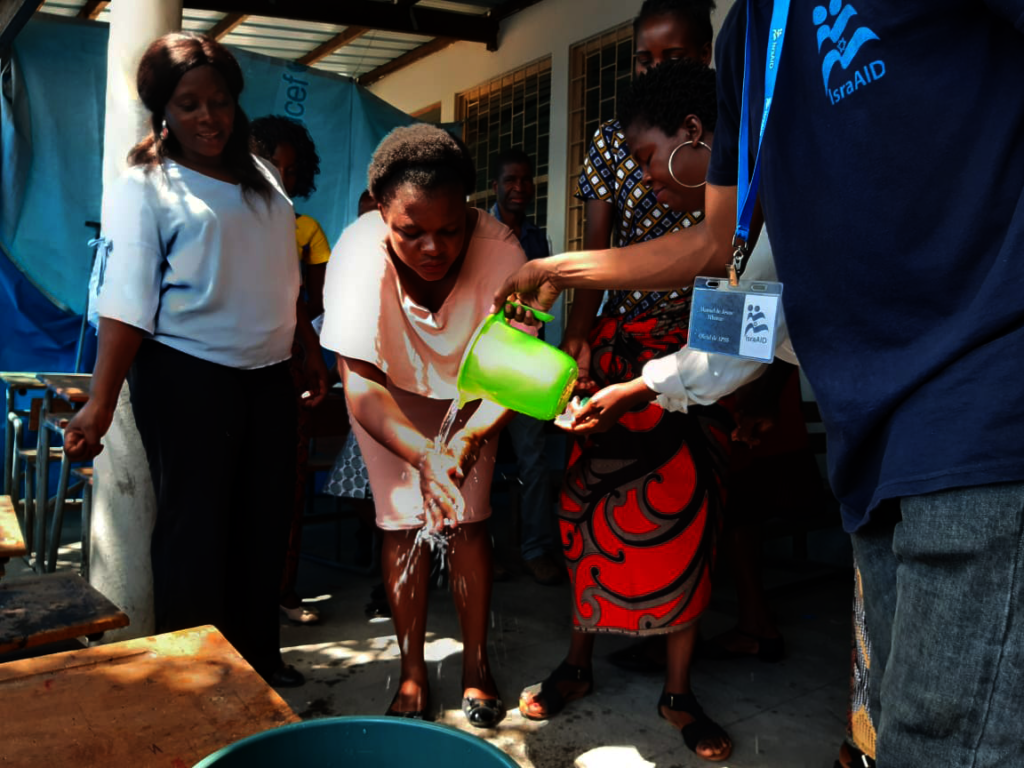 On International Women's Day, meet a few of the incredible women working to support communities in crisis with IsraAID in the Bahamas, Colombia, Greece, Kenya, Mozambique, Uganda and more.

We're incredibly proud of the strong women leaders we work with around the world, and hope you will enjoy the video linked below that celebrates their accomplishments.

IsraAID has been working in Mozambique since Cyclone Idai hit the country in March 2019. Today, we are working with the education system in Sofala Province toward increased preparedness for disasters, should they strike.

Thank you for your support! And we wish you a very happy International Women's Day!