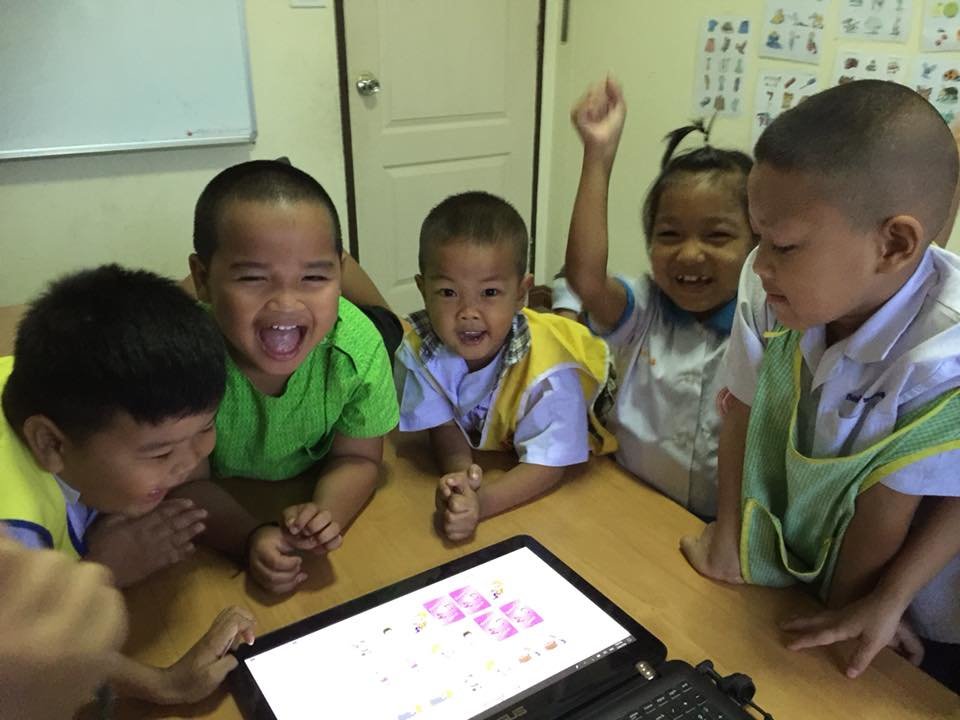 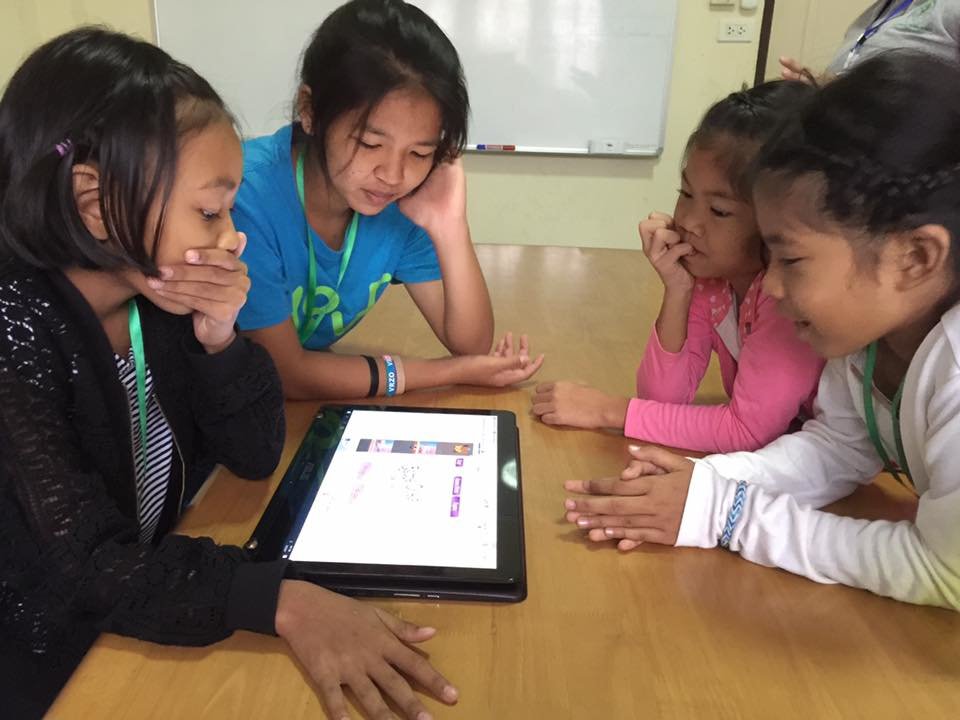 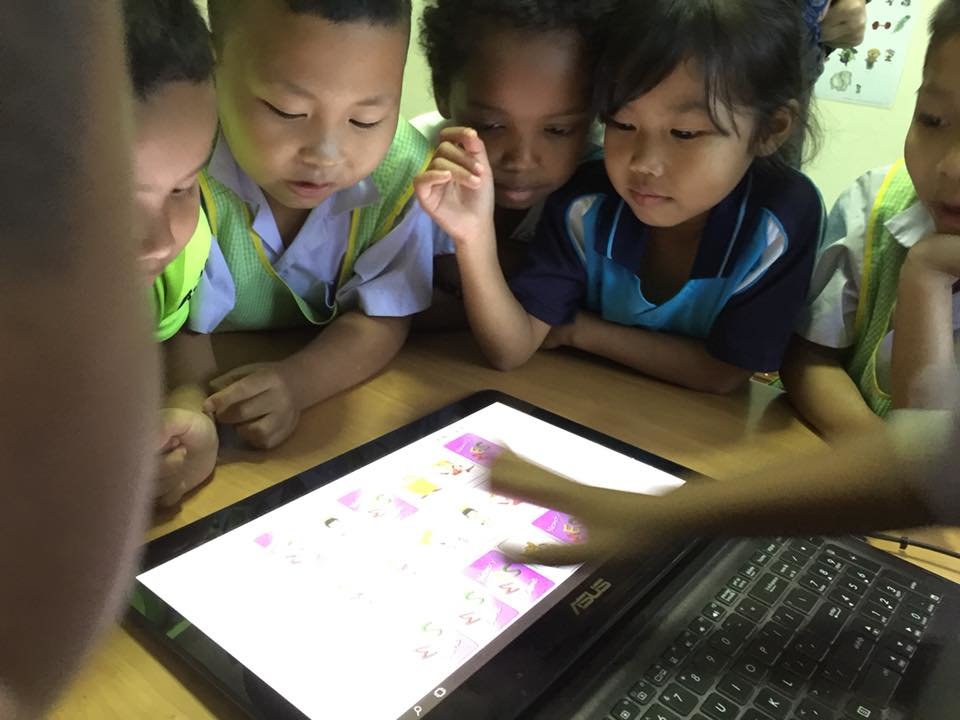 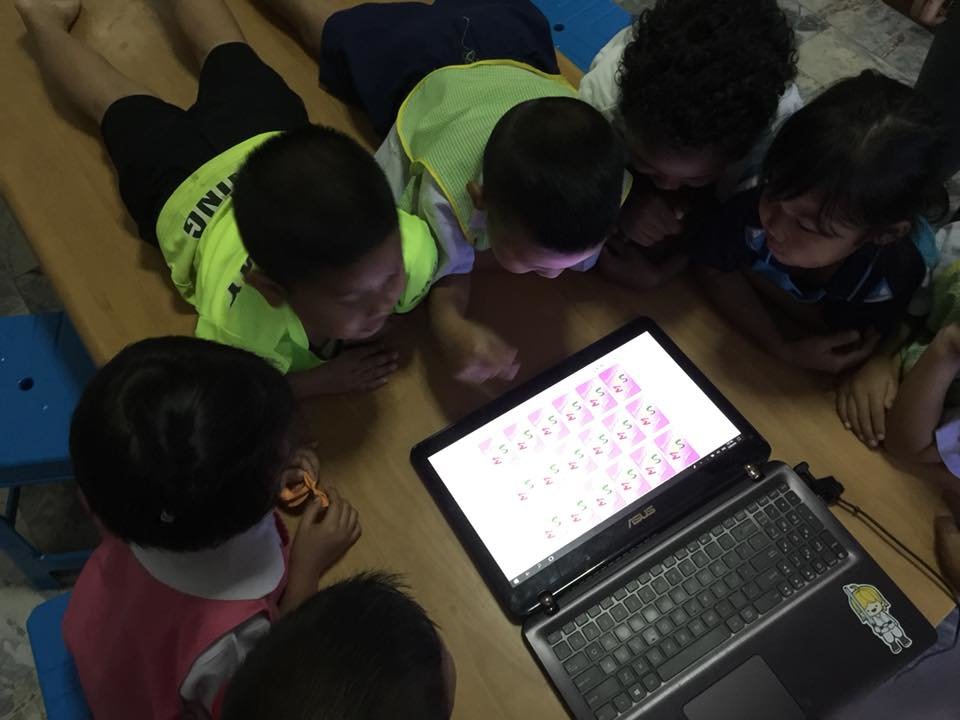 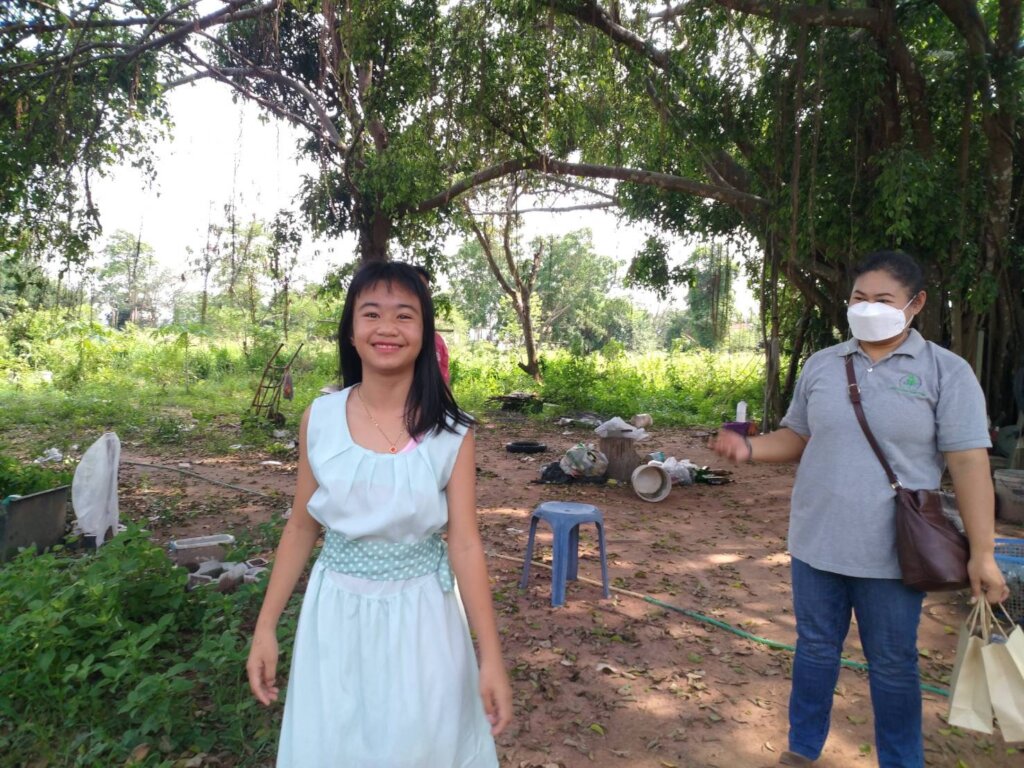 She was able to access online learning. Thank YOU!

The school year ended mid-March in Thailand. It was a challenging year with most of our children not permitted to attend school. A few of our older elementary and secondary school students had the oppotunity to submit assignments via online learning. Your donations ensure the provision of computers at the family resource center; thus, YOU provided these children with access to the internet and computers they needed to complete their assignments.Your impact is beyond measure as children have the resources to break the chain of multigenerational illiteracy.

The children are currently scheduled to return to school mid-May. The children will then have daily access to the computer and internet resources at GRACE Family Resource Center. YOUR generous donations keep this access and provide educational advancement of many marginalized families in Thailand. 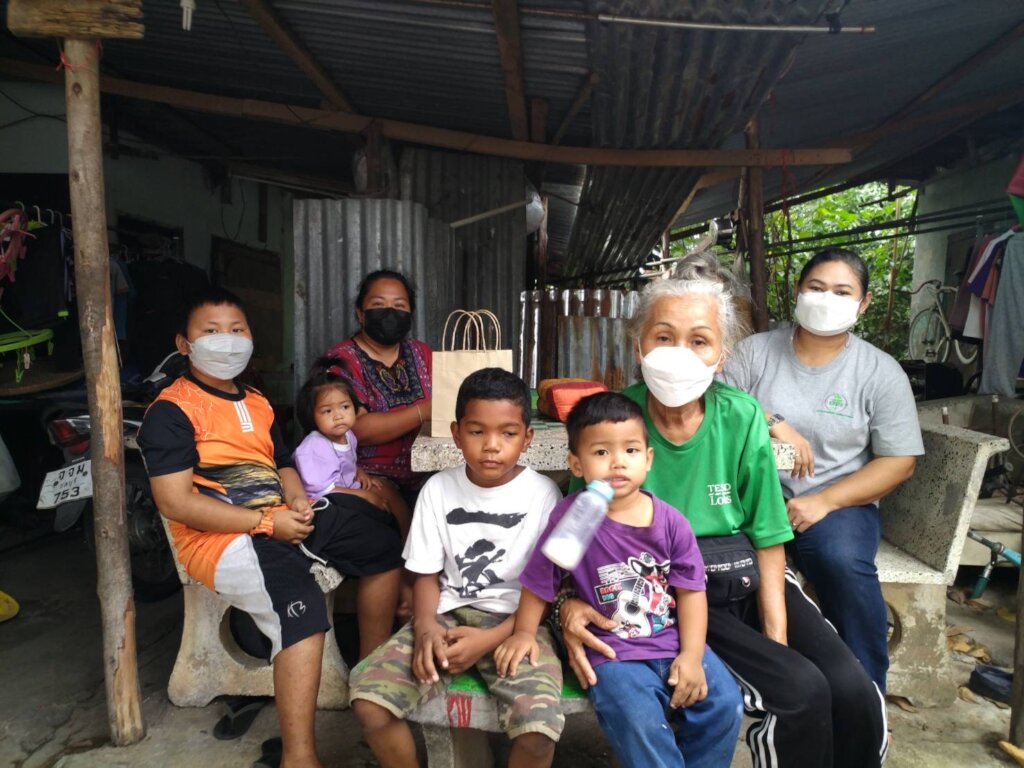 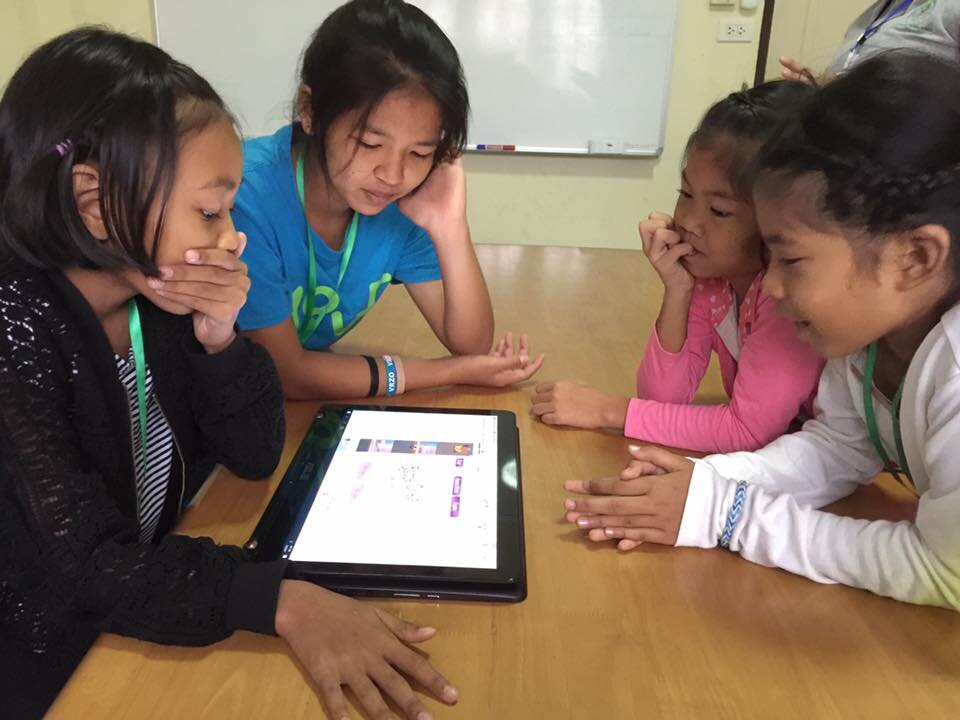 The advantages of internet accessibility have made our world seemingly more vast and small. An oxymoron, right?

The privilege to teach an impoverished child the value of internet comes with the responsibility to also teach the potential hazards of the world wide web. At GRACE, we ensure children and parents are provided with access to such trainings. It was after such lessons for our eight year old children attending the after school program that one child reported sexual abuse with associated exploitation and trafficking. Here's a bit of the story...

For these and those whom will need advocacy in the future, your generosity ensures hope. Teaching internet safety becomes more important as the internet accessibilities bridge across various socioeconomic thresholds. Thank you for supporting the expansion of computer accessibility and the safety of using these great tools. 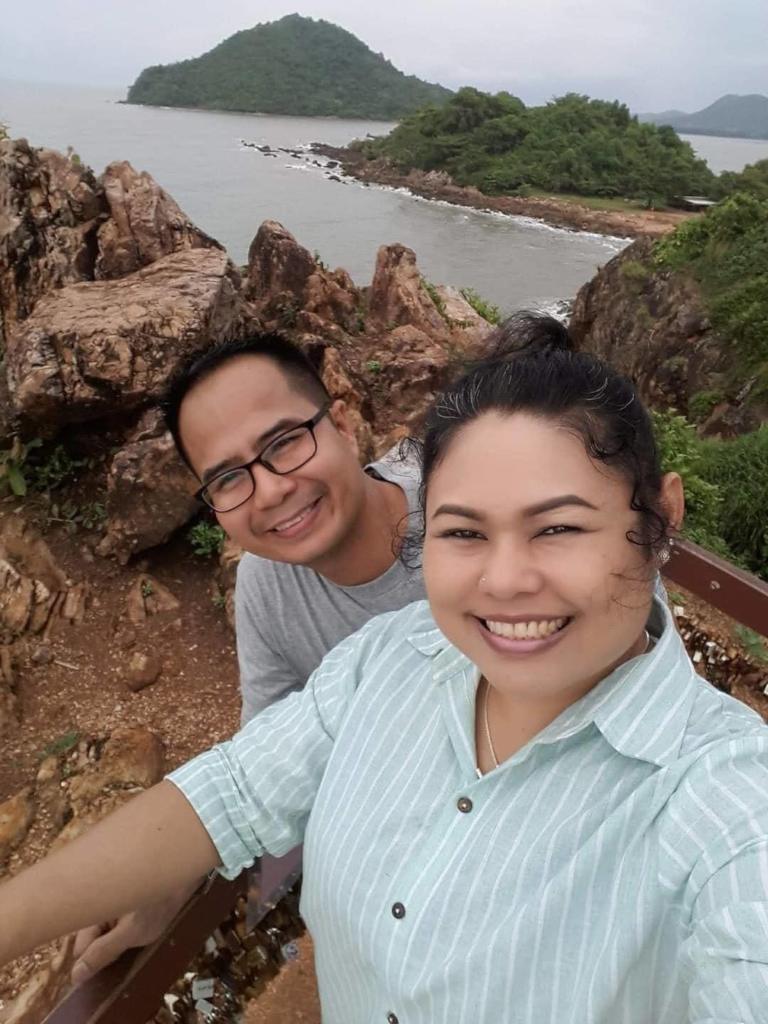 Amidst the glimmer of soon returning pre-pandemic normalcy, the Delta variant came upon Thailand as a monsoon. With hopes of economic recovery associated with tourism, hope was beginning to spark across the centers, with staff and families, and tourist on mission to contribute to society goodness. The spark quickly faded and extinguished into friends and families of GRACE not having access to the vaccinations and young families testing positive with the coronavirus. "When will it end?", a lady asked with a sense of despair. Most of the children have no access to school with the complete shutdown. Curfews are activated. No public gatherings. Only banks, grocers, clinics and hospitals remain open. Fortunately, we have access through devices and computers. But GRACE.... where the staff established a schedule for times of distributing nutritional, hygiene and educational supplies to the families and children of GRACE. The GRACE staff have increased internet social media communiciation and have provided socialization opportunities for the families to stay connected. We even had a family selfie day in which many families shared images with the group; the activity generated great conversations and enthusiam. They encourage one another and share hardships. Determined to gain strength collectively and win the battle against challenging times resulting from the economic and health disaster, families are finding hope in the new normalcy.Your support matters as these parents are suffering in the worst economic condition of their lives. Thank you for helping us to ensure essentials are available. You matter. Please consider donating to help with the multitudes of our families who have no job nor current source of income. 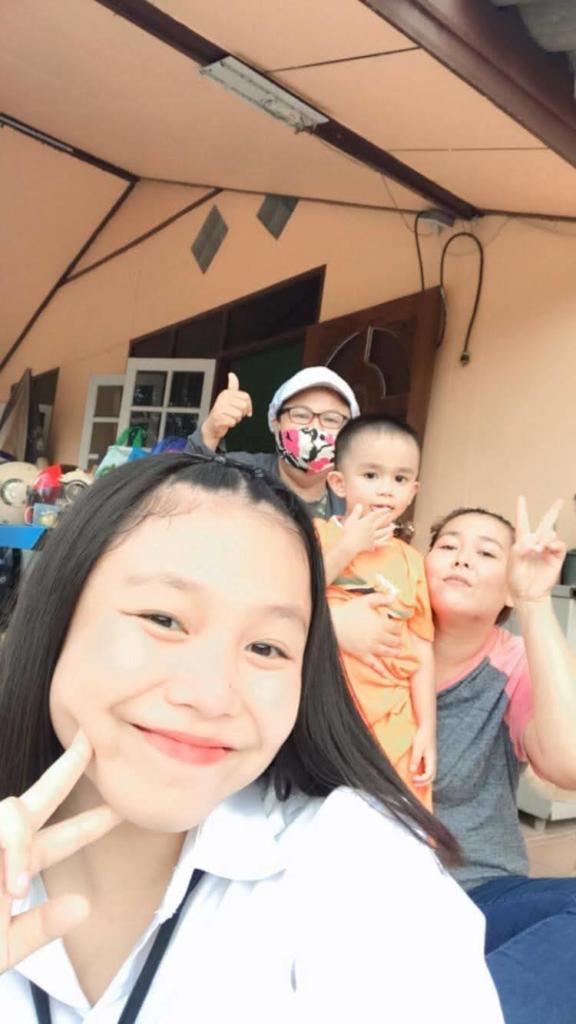 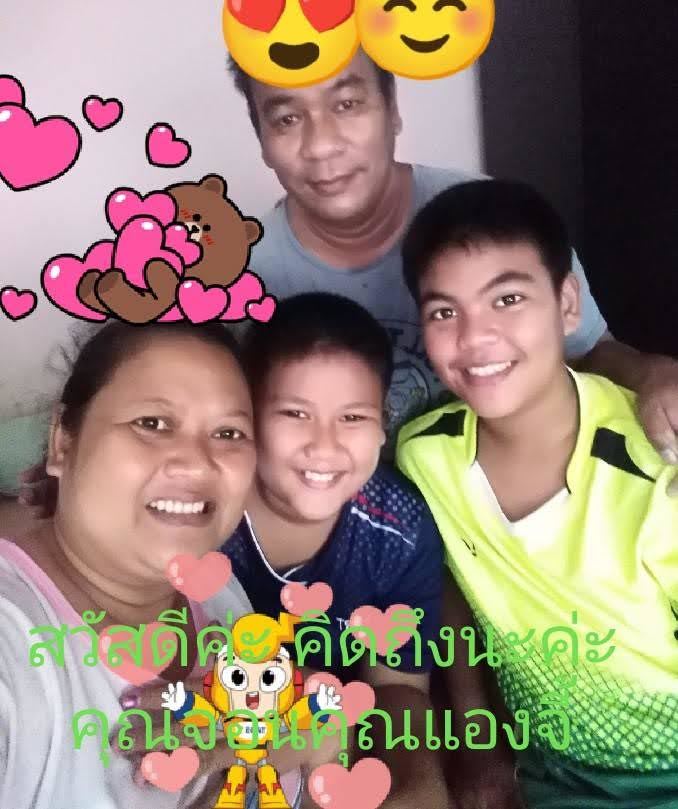 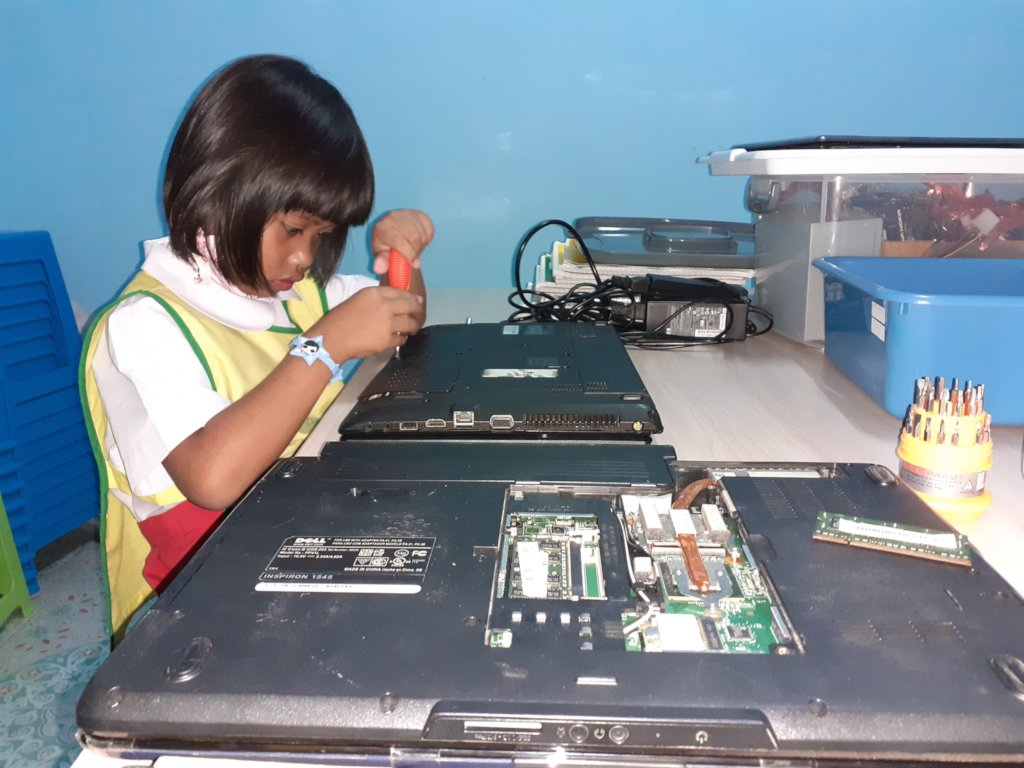 Children are excited to receive gifts - even old computer parts donated to an organization!

The importance of learning basic computer skills is an imperitive need in today's world. Possibly, acquiring adequate computer skills is equally as important as developing the basic educational skills of reading, writing and mathematics.

We are so grateful for the donated computers and parts received in March. Developing technical skills became necessary for a few of our GRACE staff members. The enthusiasm spread across the centers and opened opportunities to engage children interested in the inter-workings of the devices. Teachable moments are the best! The times children become like sponges and absorb every detail of your mentorship. Look at these sweet girls. They are provided an opportunity to learn beyond keyboarding. The GRACE staff have implemented STEM experiences through nuturing curiosity and expanding knowledge.

Your generosity is expanding the computer lab in one center while simultaneously developing the lab in another center located in another region of Thailand. We have the opportunity to go further. GRACE is opening a third family resource center in a rural province in NE Thailand, They are in need of a computer lab. We thank you in advance for ensuring more children receive access to computers. 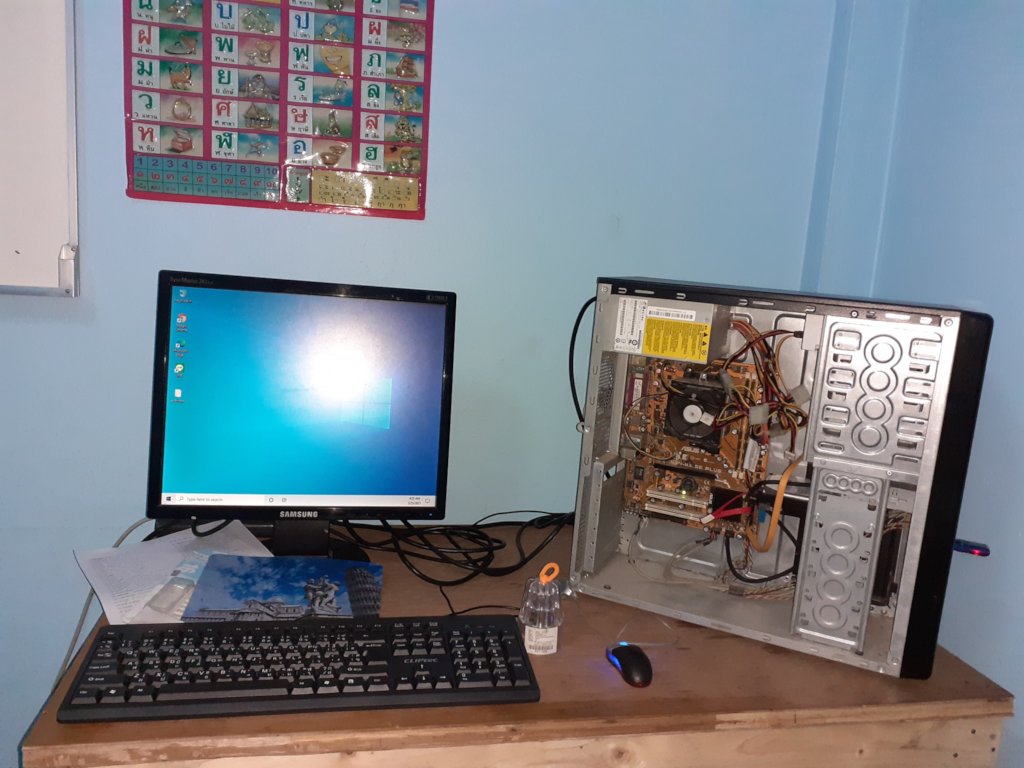 Thanks for Donating Your Old Computers! 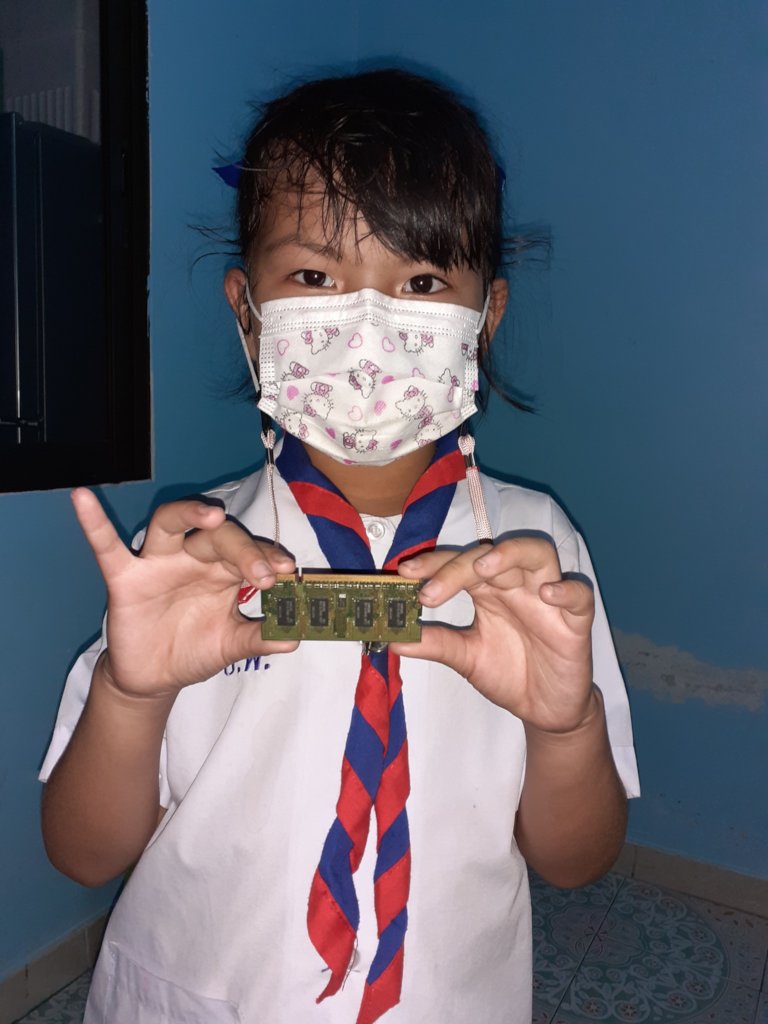 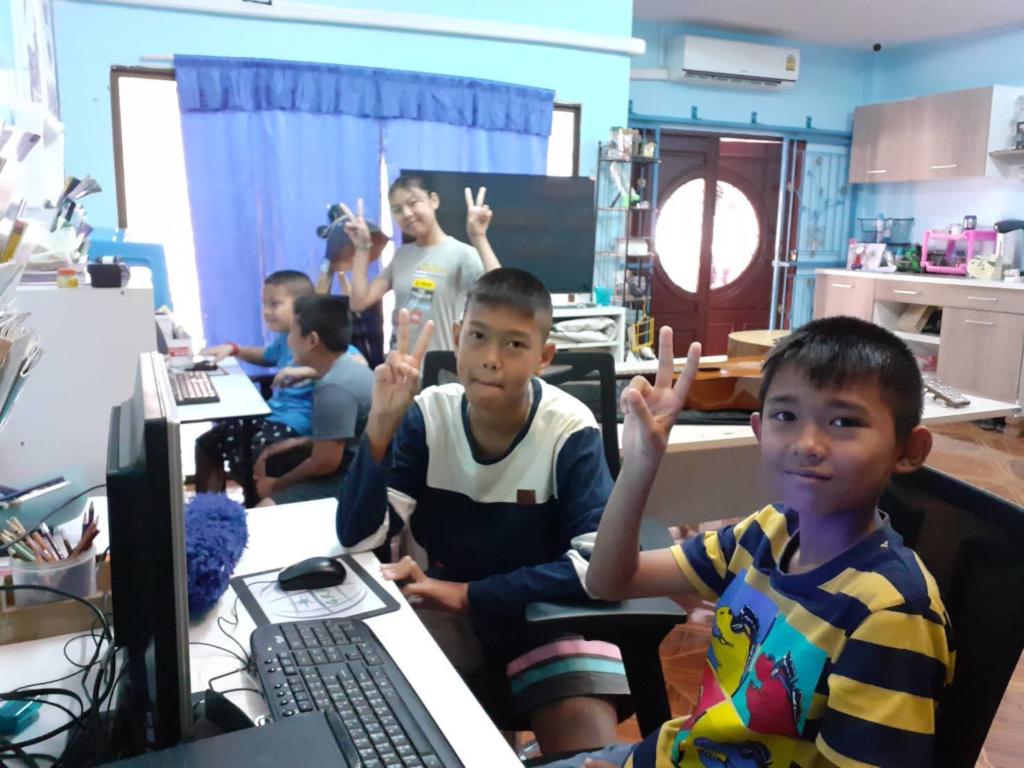 Computer skills are improving as more computers have been installed in our two family resource centers. The additions provide access for more students and staff. The children are ages four to sixteen. For the younger ones, they have established the first ever contact with a computer. It doesn't take long for the children to have fun while learning essential skills.

Beyond games and educational activities, the staff began teaching children to properly connect the necessary cables ensuring input and output communication between harddrives, monitors, projectors and printers. They are excellent learners and quick studies of this digital opportunity.

The staff in both centers gathered for training in which computer lab training techniques were discussed, standardized and implemented.

Because you recognize the vital importance of computer skills as a basic educational foundation, children with no access to such luxuries are leading and excelling beyond economically more advanced school mates. GRACE ensures children of marginalized families have the opportunity to break through the chains of multigenerational poverty, malnourishment, and illiteracy.

Thank you for continuing to provide for this incredible project! 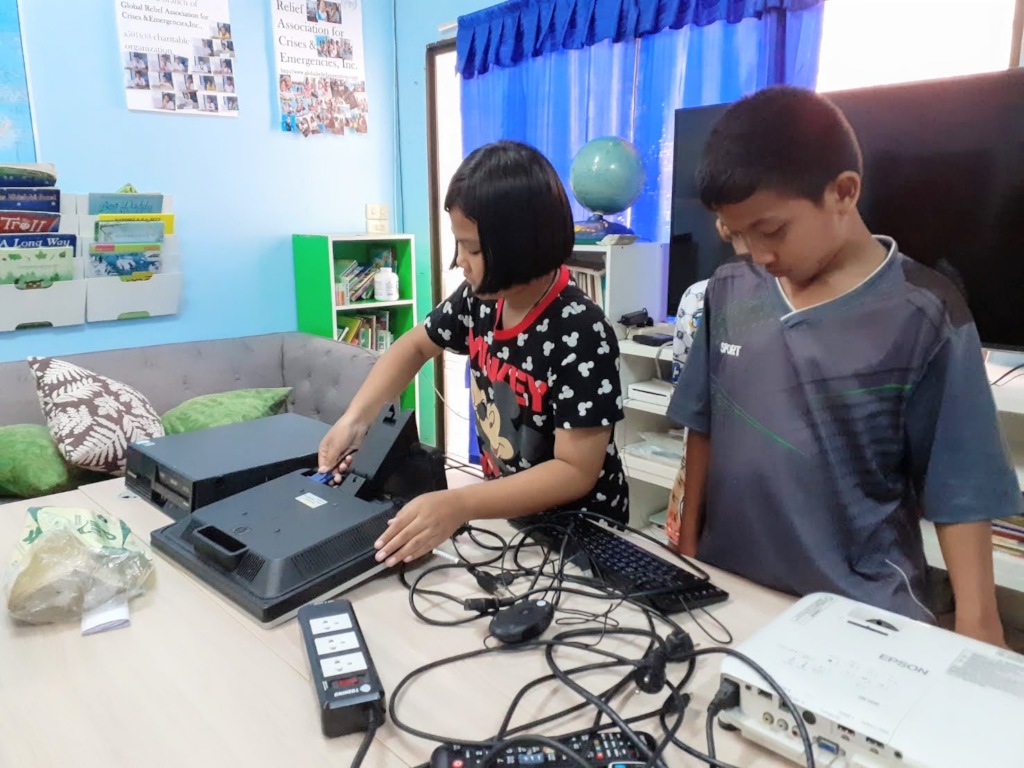 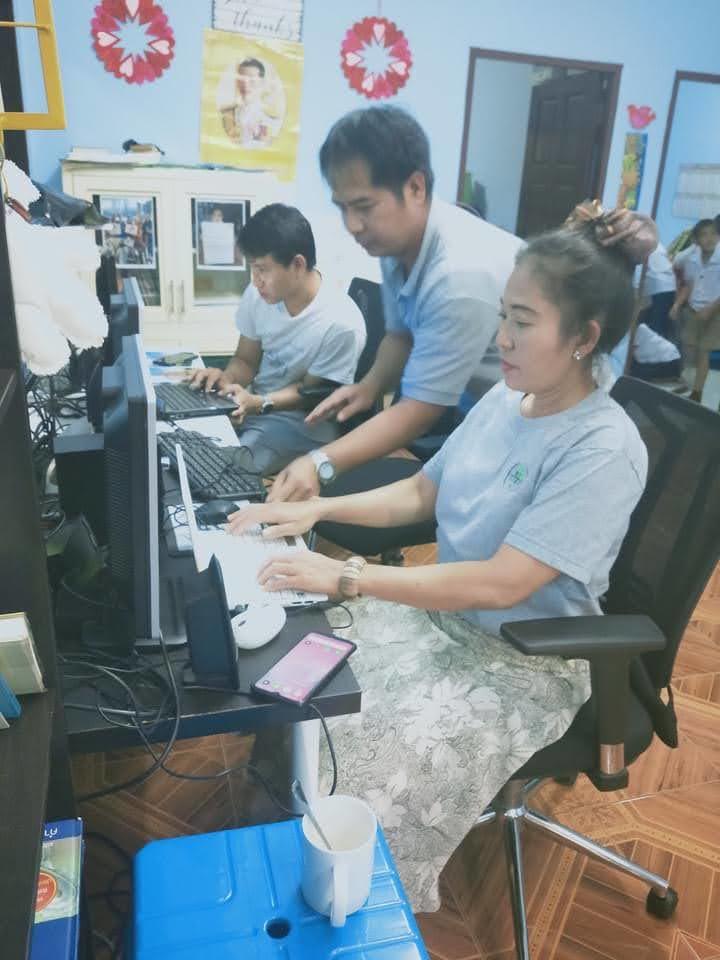 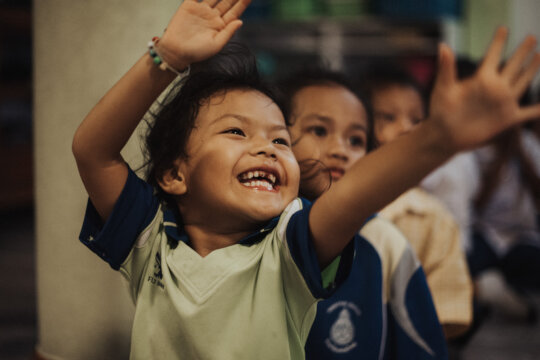 GlobalGiving
Guarantee
Donate https://www.globalgiving.org/dy/cart/view/gg.html?cmd=addItem&projid=34207&rf=microdata&frequency=ONCE&amount=25
Please Note
WARNING: Javascript is currently disabled or is not available in your browser. GlobalGiving makes extensive use of Javascript and will not function properly with Javascript disabled. Please enable Javascript and refresh this page.