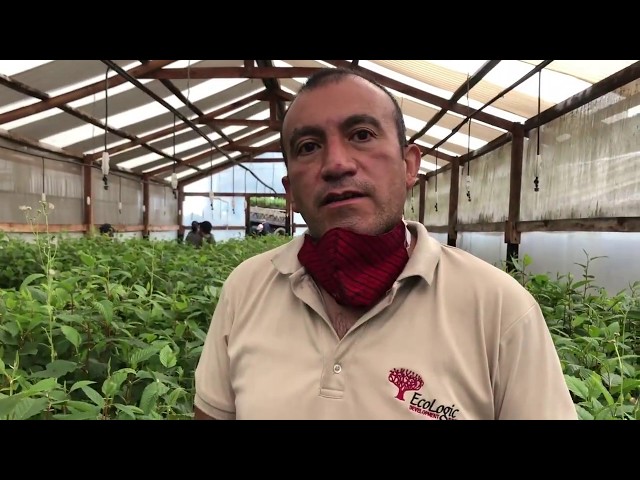 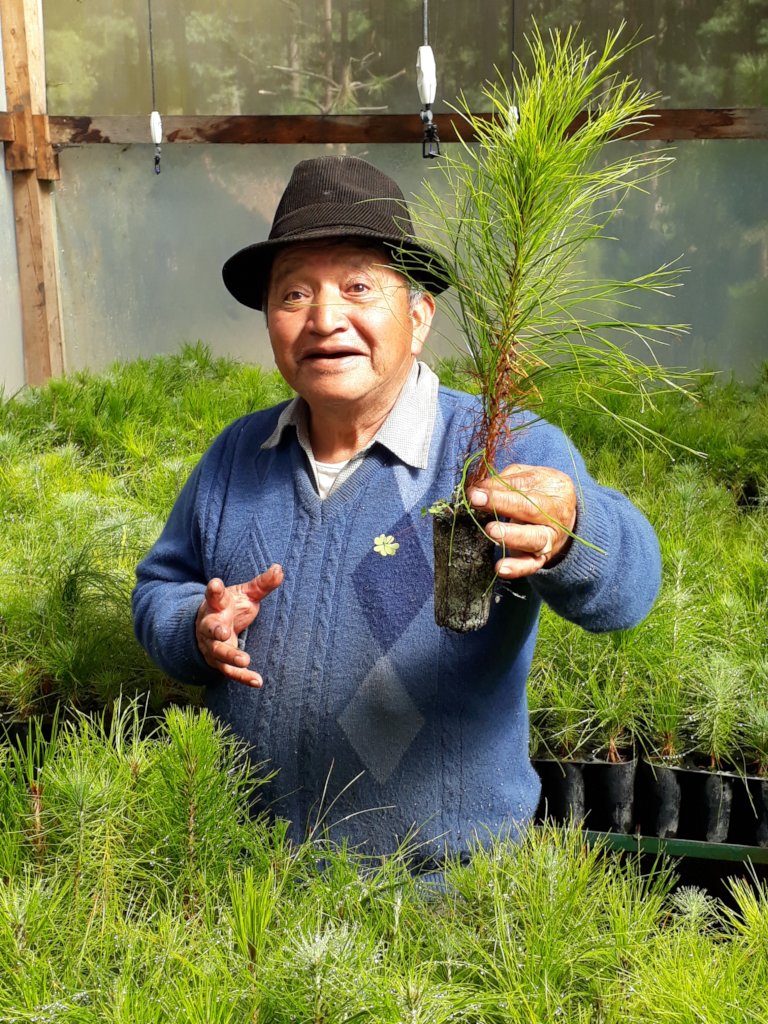 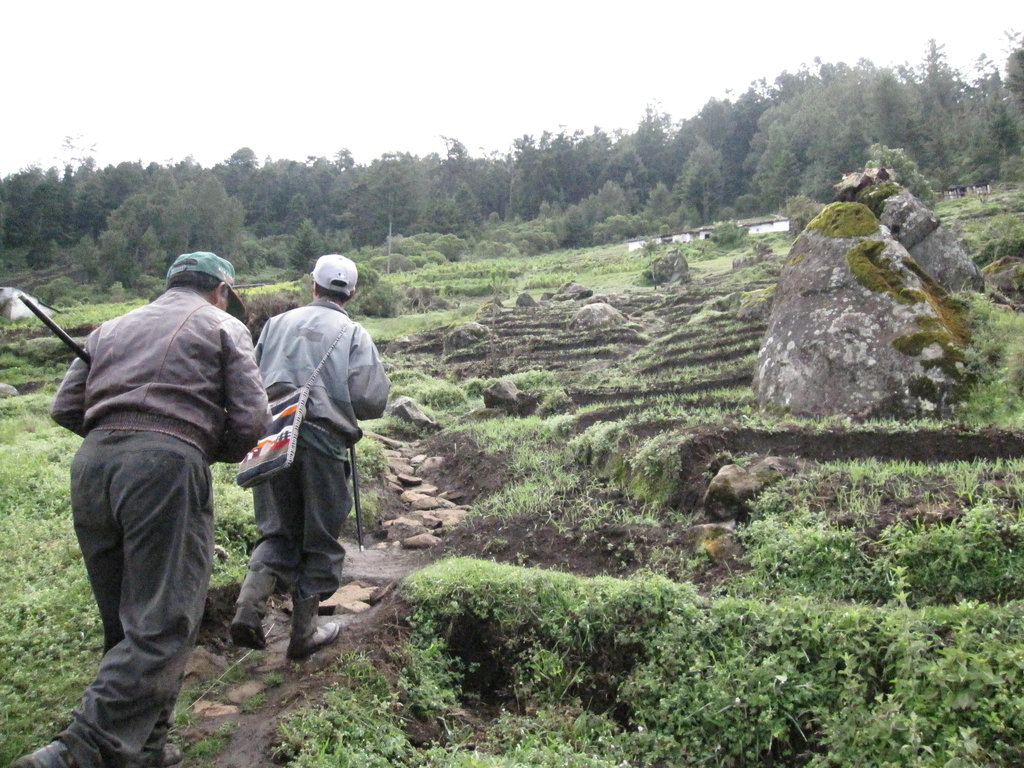 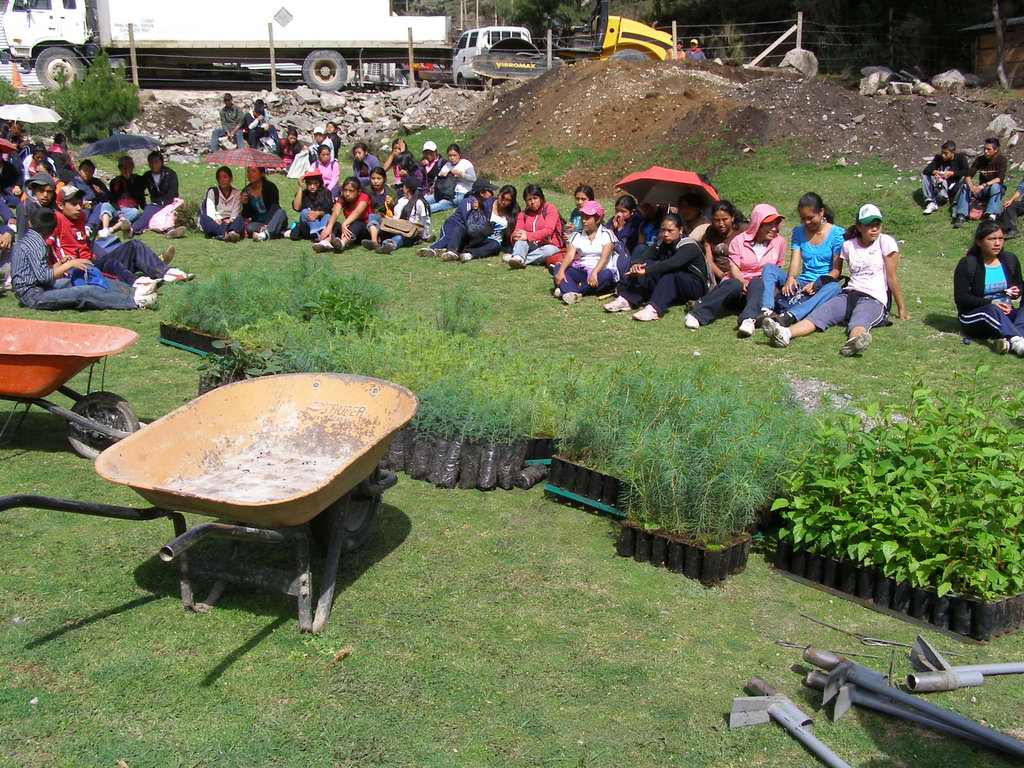 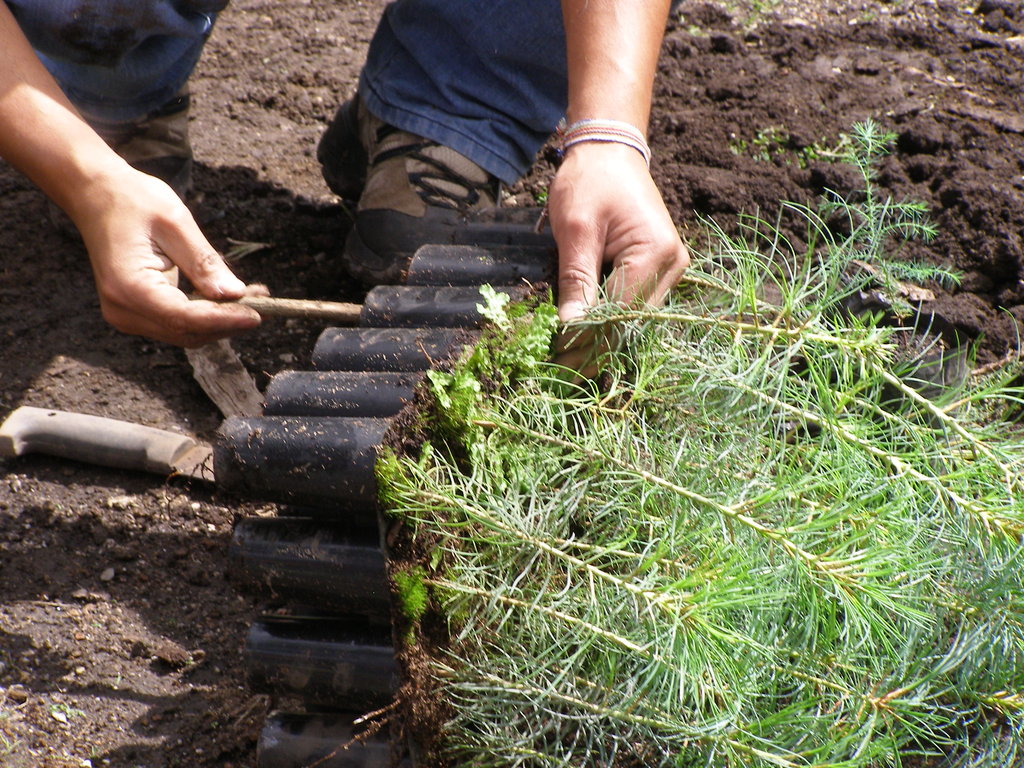 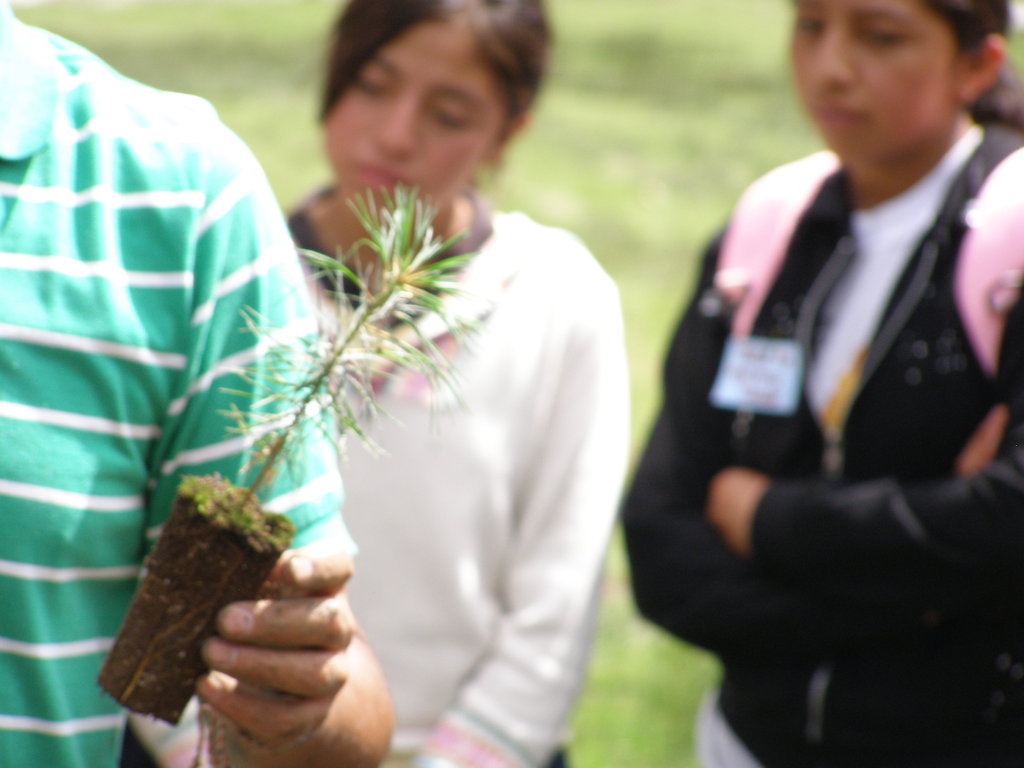 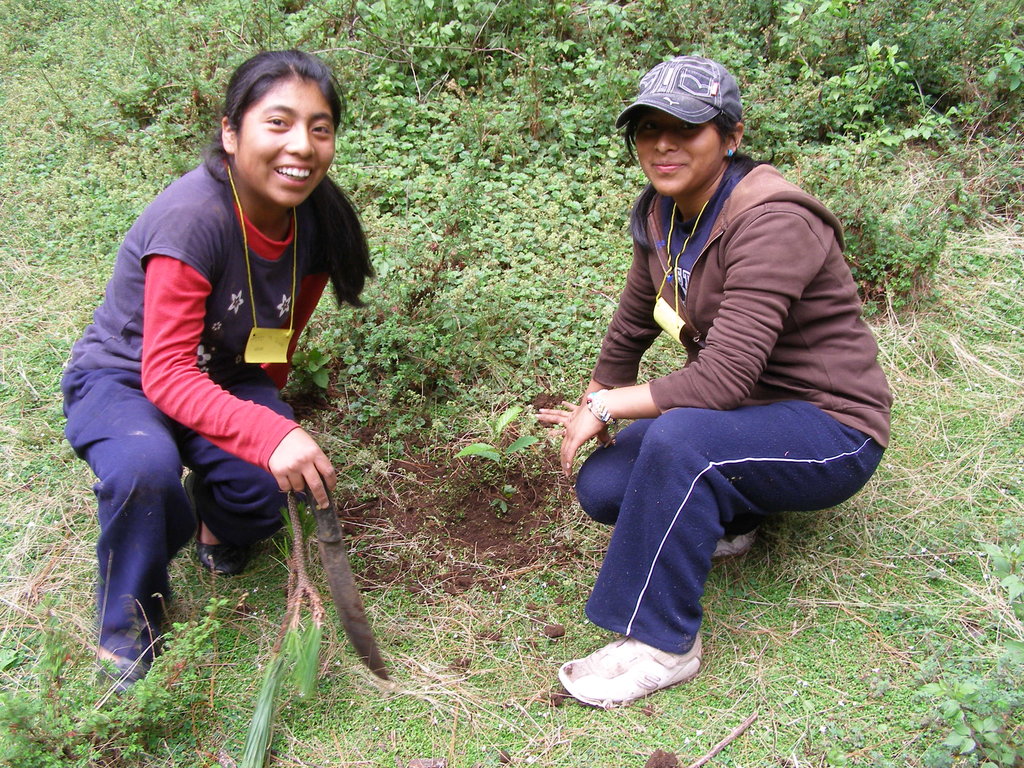 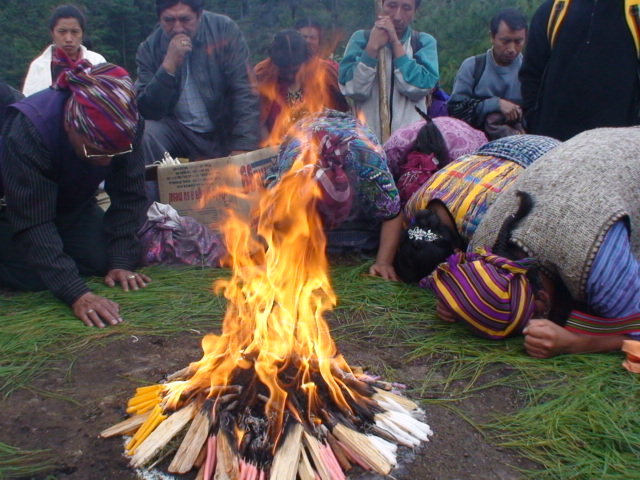 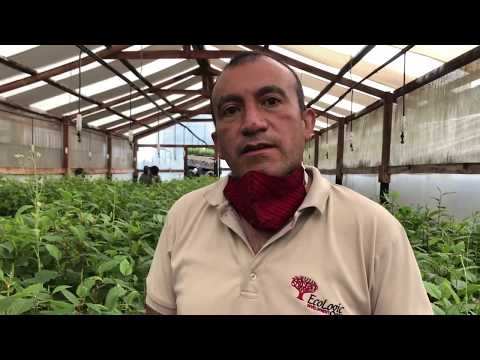 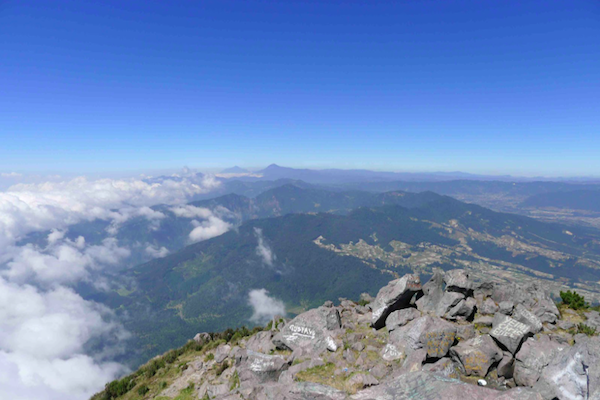 EcoLogic is proud to announce that our former intern, Julian Moll-Rocek, and his brother Thomas have released a documentary: 48 Cantones: The Mayan Forest. This enlightening filmexplores the Mayan Cosmovision and tells the story of EcoLogic’s partner, Los 48 Cantones. It serves as a reminder of humanity’s diverse cultural heritage, and offers hope that the world can find a balance with nature. Please take the time to behold this beautiful and revealing documentary here: “48 Cantones: The Mayan Forest,”

The community forest in Guatemala contains 21,000 hectares of old growth pine and has been carefully preserved by the indigenous Maya Q’uiché government known as the 48 Cantones. This organization relies on each community members serving one year of unpaid service including road maintenance, acting as local mayors, and regular patrols through the forest to prevent over-exploitation.

Water committees of community members are dedicated to building and maintaining water catchment systems that channel the precious resource directly to their homes. The 48 Cantones are in constant tension with the local municipal government, which contests their rights to the forest, pushing to privatize the water supply. Yet, in the eyes of the local population there is only one source of legitimate authority: the 48 Cantones, who ensure the continued supply of their sacred water.

The documentary offers a lesson of the fortune of the commons: a community united through their shared efforts to protect their common resources. 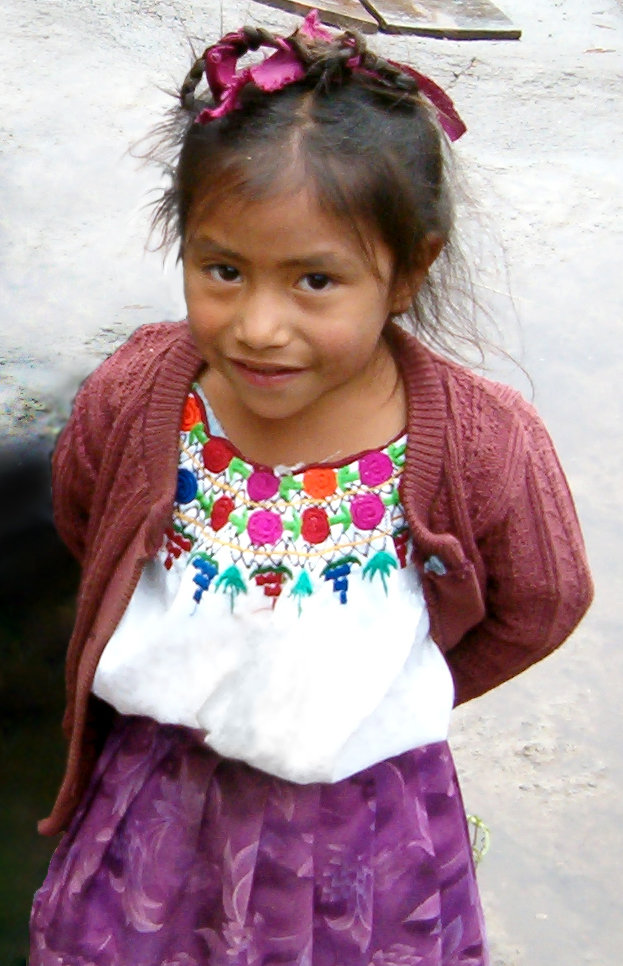 To prevent the devastation of the 52,000-acre forest of Los Altos de San Miguel in Totonicapán, EcoLogic is working with community leaders, authorities, and our partner, the 48 Cantones(the Maya K’iche governing body). This ancient community forest—one of the last remaining stands of old-growth coniferous forest that still exists in the region—sustains life for the Maya K’iche.

Gloria is a five-year-old K’iche Maya girl who lives near the forest just beyond the noise of the advancing chainsaws. Her family depends on the forest for their livelihood and survival. Without it, there would be no source of water for Gloria, her family, or the surrounding communities. For centuries, her ancestors and the community protected the beloved “Sacred Forest.” Today, her parents and her community continue the struggle to keep the forest alive and illegal loggers out.

Ten years ago, EcoLogic and its local partner organization the 48 Cantones built the area’s first state-of-the-art tree nursery with a gravity-fed sprinkler system. With your investment, over the years we have constructed eight greenhouses. Under the protection of a roof and timed-drip irrigation system, the trees’ survival rates are higher and production is far greater. With the hard work of our partner communities, our greenhouses can produce more than 100,000 saplings a year for reforestation activities in degraded areas.

Increasingly, this forest is exposed to the danger of a persistent enemy—the illegal logger. Outsiders endanger the forest and its abundant water sources, upon which thousands of lives depend.

Today, EcoLogic in helping the 48 Cantones develop and implement a plan to stop forest crimes: conducting a community-led assessment to determine more effective ways to combat the threat and identify the illegal timber traders, training forest guards and conducting patrols, and raising awareness through media campaigns.

As you read this, the chainsaws are at work. Gloria worries about the unceasing noise of the chainsaw that she hears growing closer. Will her precious forest and drinking water still be there when Gloria grows up?

Please continue to support EcoLogic's work through Global Giving and ensure that the forest will still be there for  Gloria, her community, and future generations!

"We may be poor, but we work together" 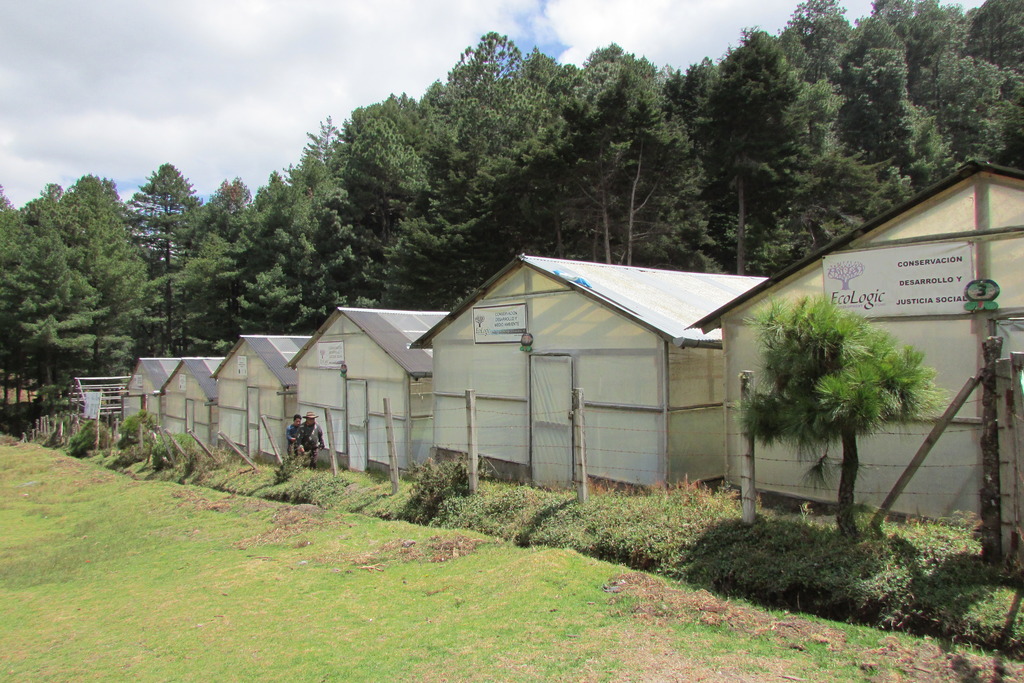 The following is a postcard from Lydia Sorensen, GlobalGiving's In-the-Field Representative in Guatemala, about her recent visit to Ecologic Development Fund.

Inside the vivero (plant nursery) in the hills of Totonicapan, Guatemala, Don Augustin gently lifts a young white pine from its tray to show me the healthy roots. He explains the importance of using the right soil depending on the type of tray, and using the right amount of organic fertilizer that he and his young relative Cesar make themselves. He waves his hands over the rows and rows of tiny seedlings describing each species (White Pine, Guatemalan Fir, Red Pine, Alder, just to name a few) and how he cares for them.

Don Augustin has been working with trees and seedlings for over twenty years, and with the Ecologic Development Fund’s reforestation project since the beginning. As he describes the trees, and their effect on the community (by helping to protect valuable sources of fresh water, and keeping the forests alive) it’s readily apparent that this is not only his life’s work, but his passion. Together with Don Augustin, Ecologic Development Fund is working with the community leaders to ensure that the beautiful forests covering the hills in Totonicapan are there for future generations.

“We may be poor,” says Don Augustin “but we work together.” The communities that will receive these trees come to help Don Augustin and Cesar with their work in caring for the seedlings, and in doing so not only “earn” the trees, but also learn about how to tend them. Surrounded by the peaceful quiet of the forest, he carefully plants a seedling in the ground, and I am filled with hope that this place will exist for decades to come. 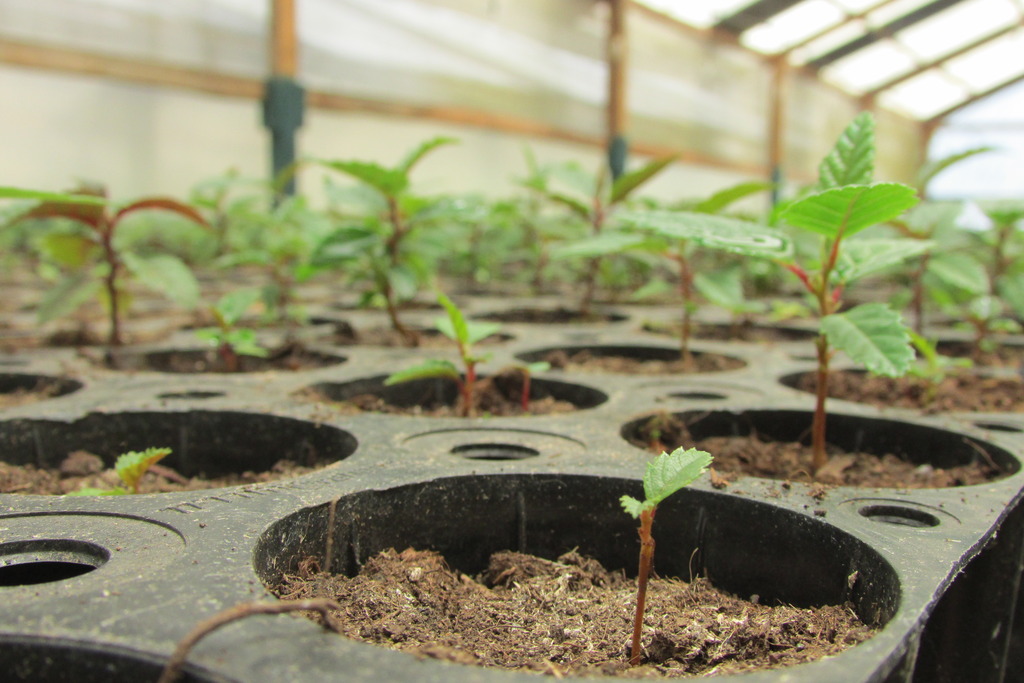 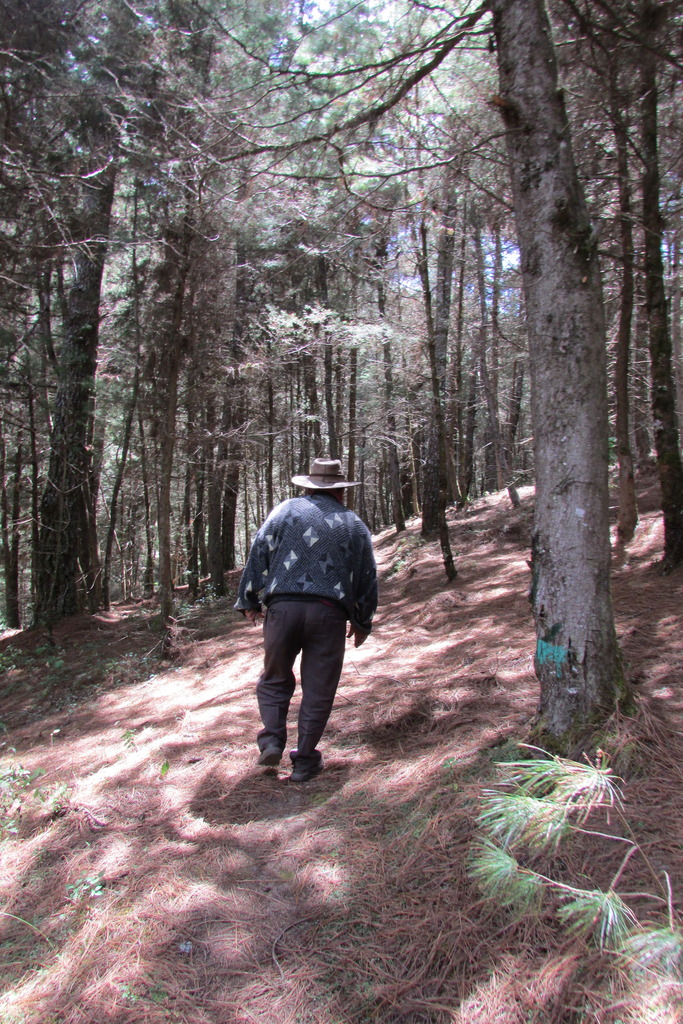 Don Augustin in the forest

Hectare by hectare you are making a difference! 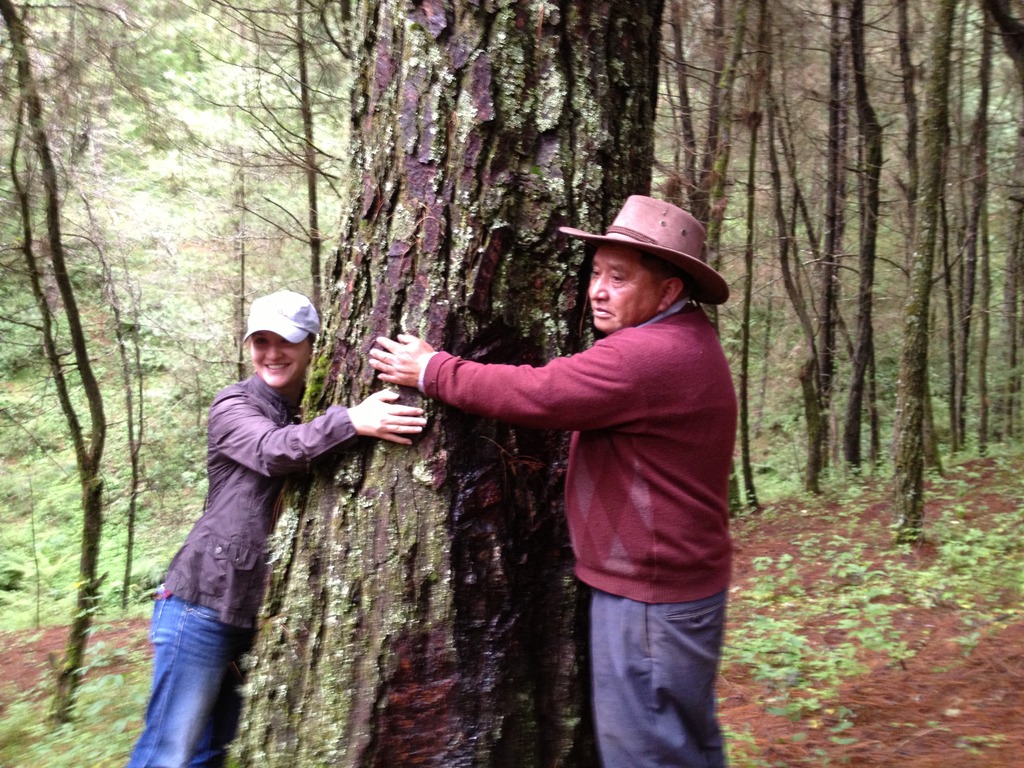 We love trees at EcoLogic!

EcoLogic Development Fund would like to thank those of you who have helped with our Community-led Reforestation in Totonicapán Forest project highlighted on the Global Giving platform!  We appreciate all that you have done to revitalize indigenous knowledge and inspire the next generation of local forest guardians. Together, we have been able to accomplish amazing things over these past couple of years.

Since 2003, EcoLogic has worked in Totonicapán, Guatemala with a local partner, The Forest Commission of the 48 Cantones, which is a centuries-old Maya-Quiché governing body responsible for the restoration, management, and conservation of the Communal Forest of Los Altos de San Miguel.  Located in the central highlands of Guatemala, the Communal Forest contains an estimated 21,000 hectares of forest habitat, which faces an annual deforestation rate of around 1%.

As the largest intact old-growth forest in Guatemala, it houses the biggest remaining stand of the endangered Guatemalan Fir, which is also home of the quetzal (the national bird) and 14 high-priority neo-tropical migratory bird species.  Substantial deforestation also exposes and degrades the forested watersheds that serve as the principal source of drinking water for these local communities.

The Guatemalan Fir is an evergreen tree native to the Central American highland regions and the southernmost member of the genus Abies.  Ranging from southern Mexico to Honduras and El Salvador, it holds both economic and cultural importance in the region.  This species also is historically popular as a source of timber and as a Christmas tree.  Consequently, widespread extraction through both legal and illegal means, as well as urbanization in the Totonicapán region, have resulted in overexploitation of the forest.

Other main drivers of deforestation include population growth, slash-and-burn agriculture, and lack of education about conservation among local residents.  Consequently, large fragments of deforested areas and degraded habitats totaling between 4,500 and 5,000 hectares are found throughout the forest.

In 2014, EcoLogic will continue to partner with the 48 Cantones, working closely with the elected members of its Natural Resource Committee, to mitigate these threats and strengthen the restoration, management, and long-term conservation of the Communal Forest and its habitats.  The local, balanced approach to conserving this forest serves as a model for sustainable forest management strategies needed to minimize deforestation and endangerment of native species in the region.  Additionally, this project demonstrates that local people often are those best-equipped to preserve their natural surroundings as they are the ones who depend on its resources over the long-term. Continuing our efforts and our close partnership with the 48 Cantones, EcoLogic’s reforestation project is focused on the endangered Guatemalan Fir (Abiens Guatemalensis) and the health of the forest’s habitat.

So far, you have been a part of a committed group of individuals who have helped us raise $137 towards a goal of $5,000.  I know we can do better! With your help, EcoLogic will have the tools we need to help the 48 Cantones protect this forest for generations to come.  You can make this possible – please help us meet our goal and raise an additional $4,863 by the end of the year.  After all, we are all connected and the forests of Totonicapán are part of the lungs of the Earth that sustain us all. 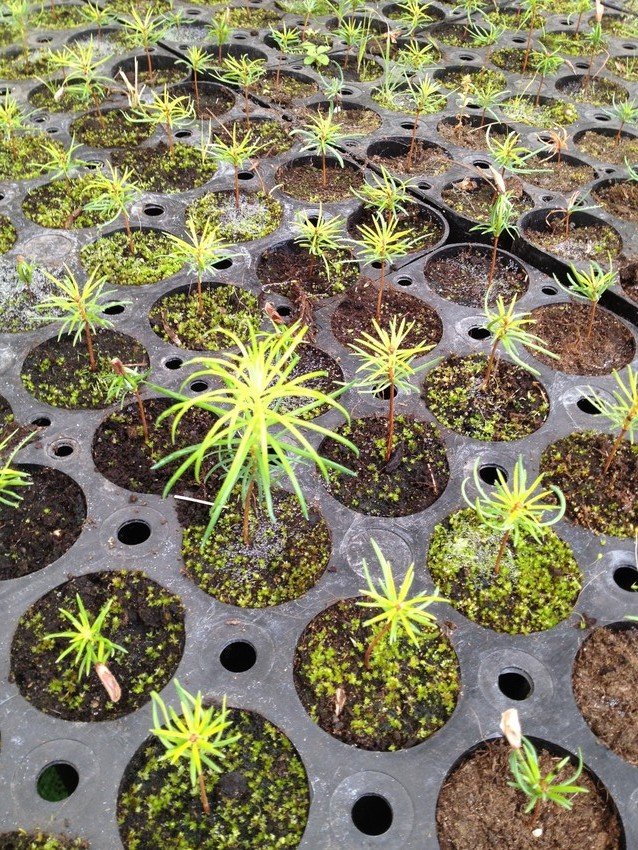 Close-up of the seedlings currently growing

We recently visited our work in Totonicapán, Guatemala, getting to see the current state of the 8 greenhouses EcoLogic has helped establish. As of this September, 5,520 seedling trays have been fully planted with 132,480 seedlings of different species and ages. These include white pine, red pine, alder, oak, and Guatemalan fir, among others. The trays used to grow these seedlings yield a root “plug,” which makes the roots more resilient and decreases mortality once they are transplanted to the reforestation site.

Another issue to keep in mind is fungal diseases, which can be difficult to control and, once they infect a plant, they are hard to eliminate. For example, gray mold, caused by the fungus botrytis cinera, can cause damage to seeds in cones and during germination. In order to avoid this, our local partner the Natural Resource Board of the 48 Cantones, has been experimenting with organic fungicides. The concoction in the image below includes natural ingredients such as garlic, onions, and ginger, as well as certain microorganisms.
At the helm of this process are Don Agustin, his assistant Cesar, and EcoLogic’s field technician, Fernando Recancoj. The pungent liquid will remain in the 200 liter barrel for 30 days until it is ready to be sprayed on the saplings. We’ll let you know how it goes!
Don Agustin is excited to show us his handiwork. He has been overseeing these nurseries, in their different stages, for over 10 years. He proudly shows off all the little seedlings, which he fondly refers to as his “children”. This is just one of the steps we are taking to help the people of Totonicapán protect the 21,000 hectare forest of which they are stewards. 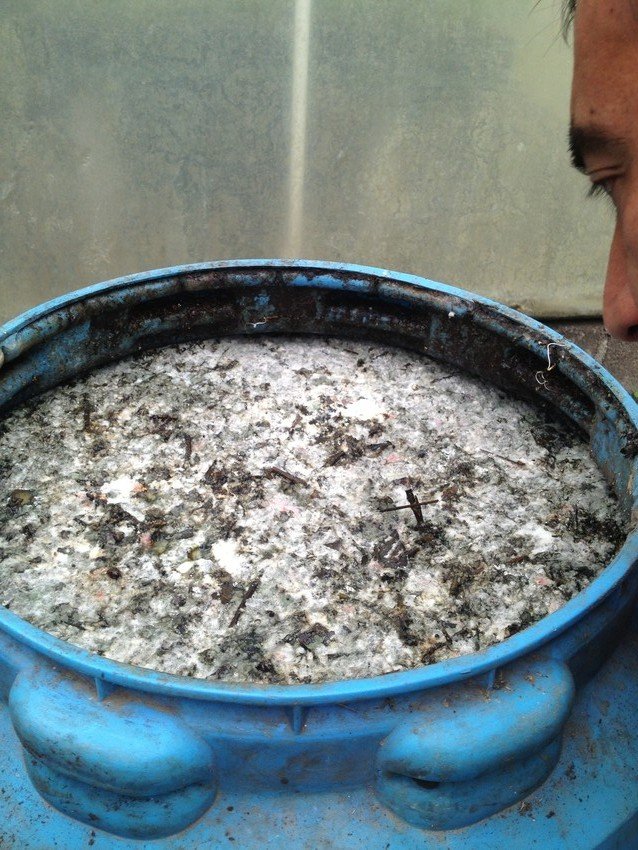 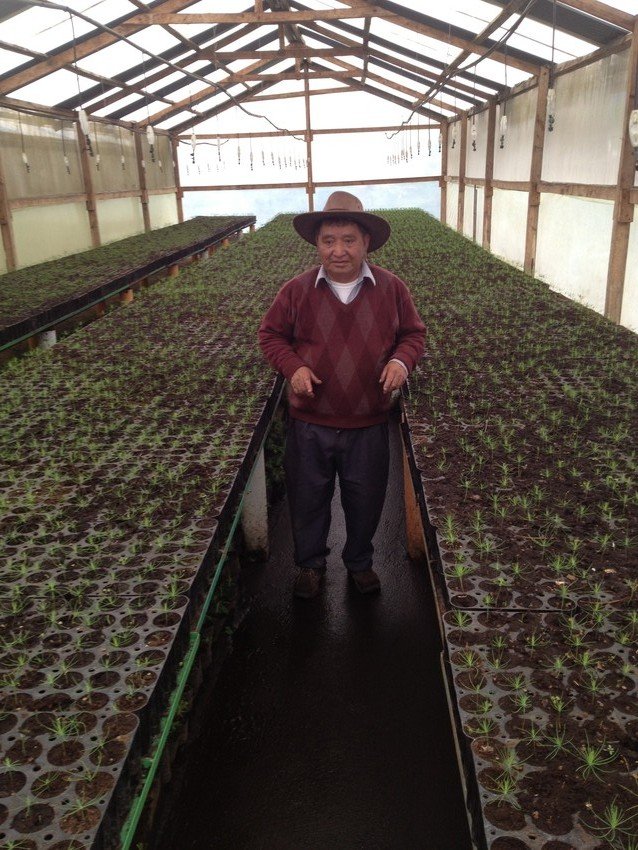 Don Augustin with his seedlings

Support another project run by EcoLogic Development Fund that needs your help, such as: 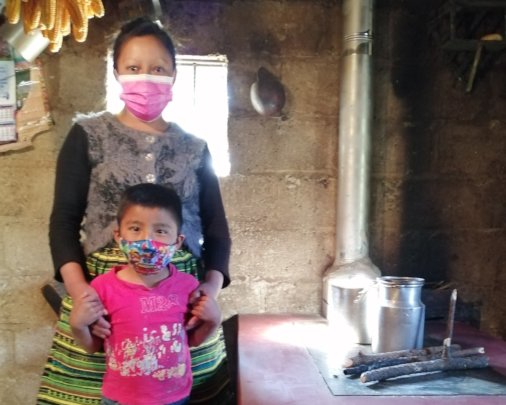 GlobalGiving
Guarantee
Donate https://www.globalgiving.org/dy/cart/view/gg.html?cmd=addItem&projid=9083&rf=microdata&frequency=ONCE&amount=25
Please Note
WARNING: Javascript is currently disabled or is not available in your browser. GlobalGiving makes extensive use of Javascript and will not function properly with Javascript disabled. Please enable Javascript and refresh this page.