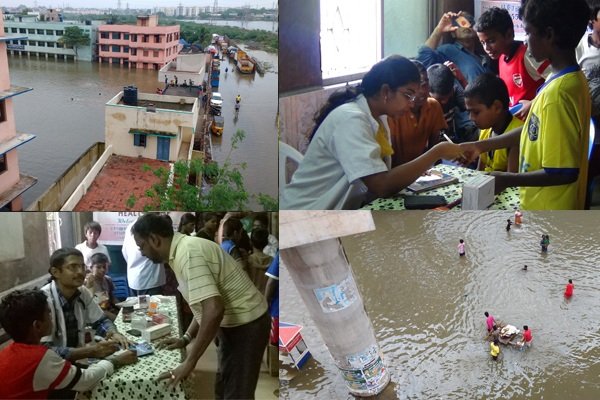 GlobalGiving and Child Rights & You

The Flood Relief Programme was rolled out within a few days after the Floods devastated Chennai city and affected the lives of millions of marginalised children.

The first phase constituted the distribution of relief kits to the neediest families in Vyasarpadi area.  Due to the TN state assembly elections which were scheduled for May 16th 2016, the Election Commission Code of Conduct was in place till the end of May 2016. Immediately after the CoC was lifted, CRY re-started its work on the remaining phase of the Chennai Relief Programme.

Relief support of Educational and household materials to more than 1000 Families and children was possible due to fund support from GlobalGiving.

A comprehensive analysis and identification of the children and families who would be the beneficiaries of the programme was done by CRY with the help of local volunteers in Vyasarpadi. Families and children who were residing in the interior parts of the slums and in homes most affected by the floods were chosen. Families who had lost everything and also had not received any form of relief from either government or non government groups were also identified.

The response from the beneficiaries was a very positive one and there was a great deal of joy at the kind of materials received.

The families felt that the Household Kits helped them to restore basic home needs and ensure cooking of safe food for the children at home. The floods had completely washed away the vessels and clothing in the hutments/buildings thus leaving the children and families without basic clothing or means to store clean water and cook safe food. In this context the families were very happy to receive the household kits.

The Educational Kits were also very well received especially since they were given at the time of School reopening for the next academic year. Here again, the children had lost all their school material in the floods and the thought of going back to school without basic material had been a very serious concern. With this Educational kit the children were happy to get a complete set which would help them get ready for school and complete uninterrupted schooling.

GlobalGiving
Guarantee
Donate https://www.globalgiving.org/dy/cart/view/gg.html?cmd=addItem&projid=22780&rf=microdata&frequency=ONCE&amount=25
Please Note
WARNING: Javascript is currently disabled or is not available in your browser. GlobalGiving makes extensive use of Javascript and will not function properly with Javascript disabled. Please enable Javascript and refresh this page.