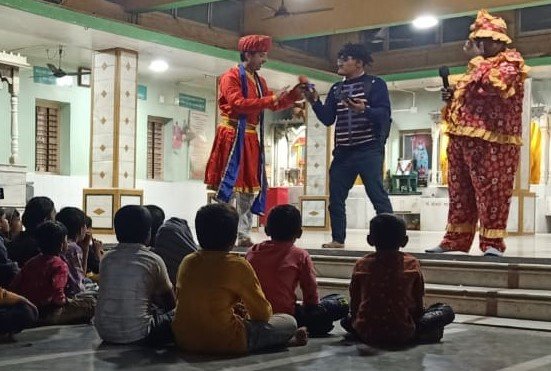 AWAG is pleased to share the Progress Report with regard to our project BUILD CAPACITIES OF 400 DEPRIVED GIRLS IN GUJARAT.

In celebration of our hard work, AWAG has been vetted by GlobalGiving for being actively engaged in their community and as a top-ranked organization in 2020! AWAG takes this opportunity to express gratitude to all our donors and well wishers for helping us realize our vision, and look forward to your continued support as a trusted partner and change-maker. What's more, we’ve also received the Site Visit Verified badge because we hosted a GlobalGiving representative.

As part of building capacities of adolescent girls and young women at the community level, AWAG organised awareness sessions and street plays to highlight key issues such as:

A total of 225 adolescent girls, young women and the community at large from five villages in Saurashtra region of Gujarat, showed their active participation and gained insights on the said topics.. 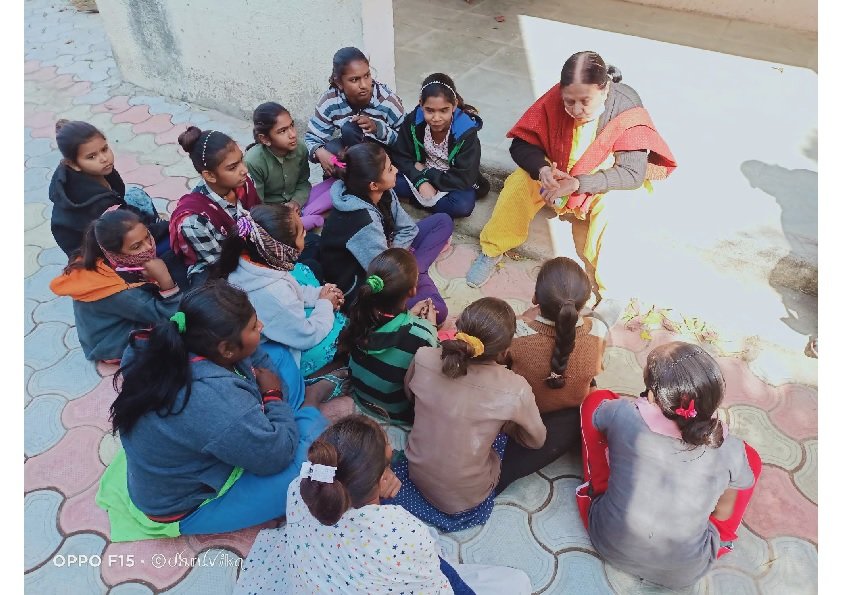 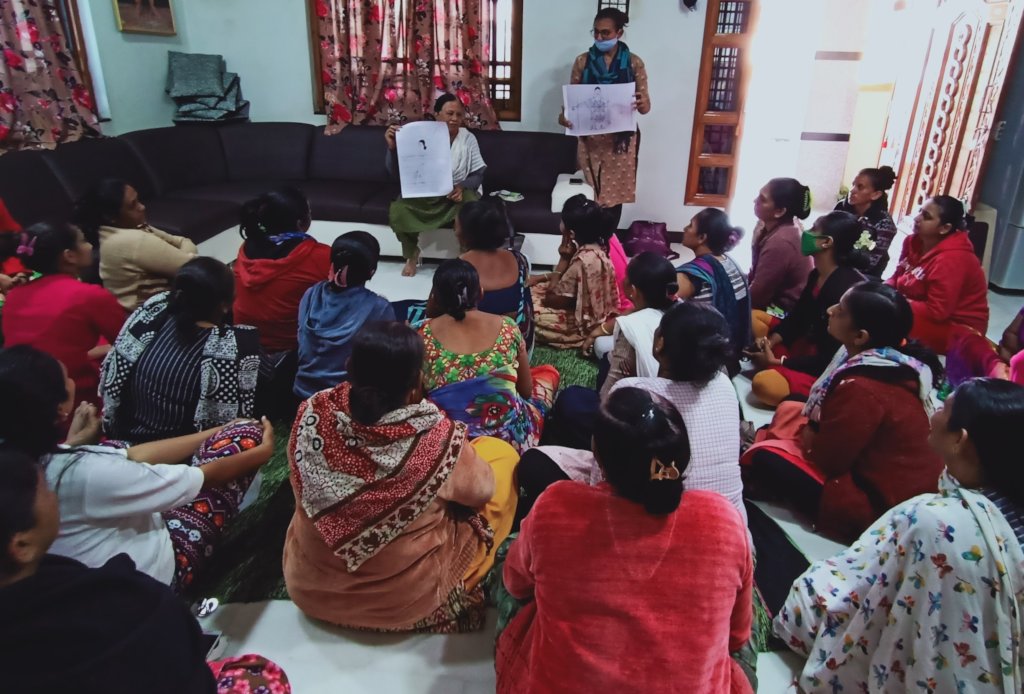 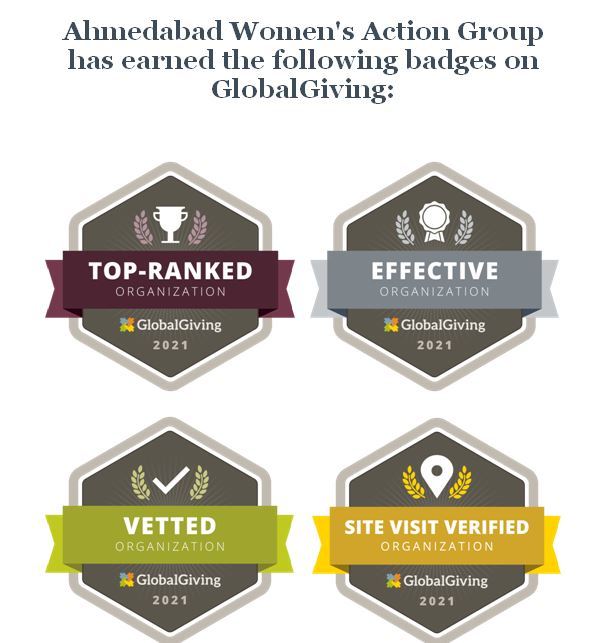 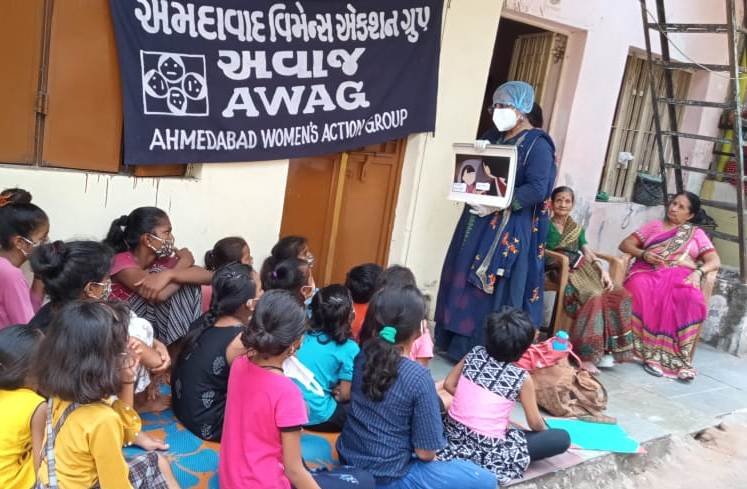 As part of building capacities of adolescent girls at the community level, AWAG organised meetings for them at Ahmedabad.

A total of 75 adolescent girls actively participated in the meetings that focused on:

Through discussions and games, the participants gained insights on the above topics. These meetings were undertaken in small groups of 10-12 participants with strict adherence to government norms of social distancing, sanitation and wearing of face masks related to Covid-19. 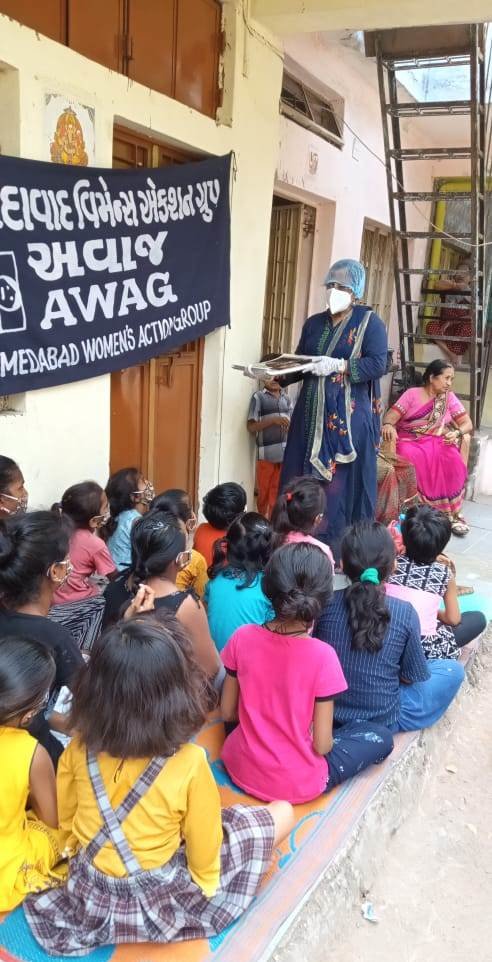 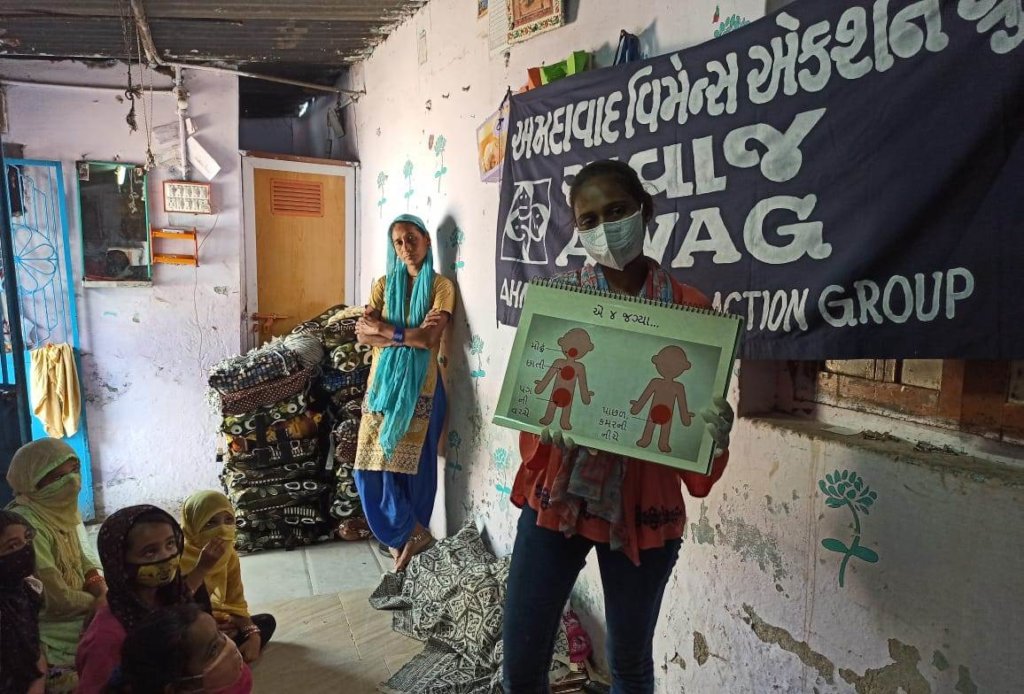 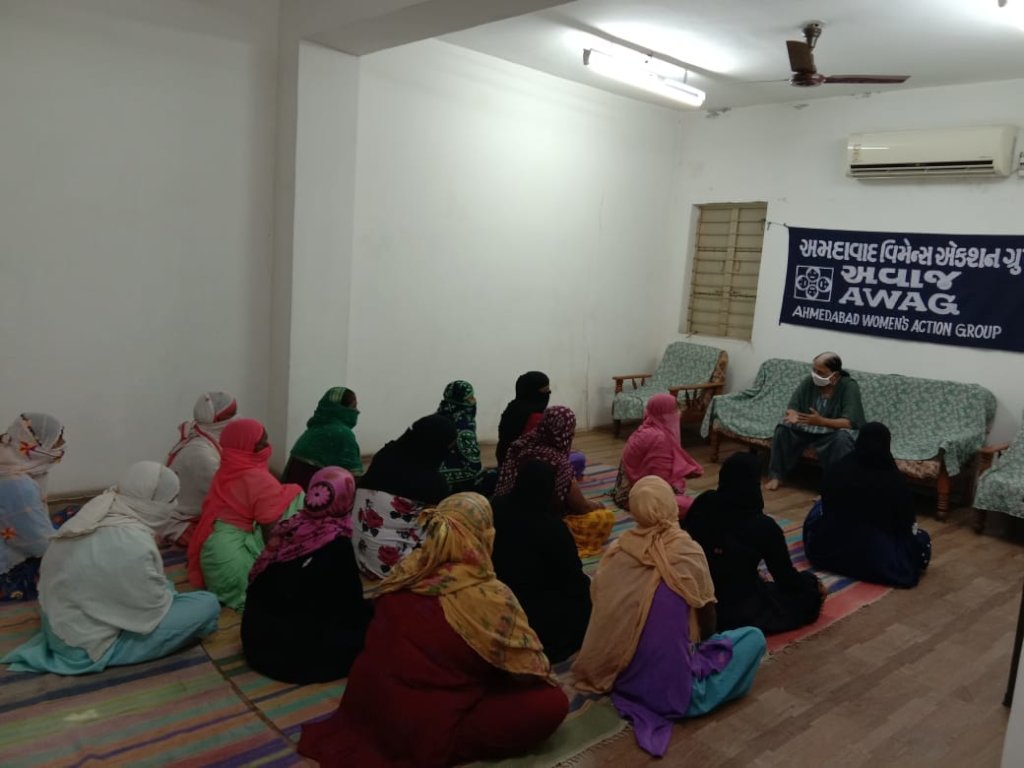 Amid the COVID-19 pandemic many countries have reported an increase in domestic violence and intimate partner violence. The UN has described the worldwide increase in domestic abuse as a "shadow pandemic" alongside Covid-19. Domestic Violence cases have increased by 20% during the lockdown, as many people are trapped at home with their abuser.

Pandemics, financial insecurity, stress and uncertainty have led to increased aggression at home, with abusers able to control large amounts of their victims' daily lives. As stated by the French Secretary of Equality Marlene Schiappa, "Confinement is a breeding ground for domestic abuse."

Domestic violence and sexual exploitation, which is already an epidemic across the world, spiked when households were placed under the increased strains that arose from security, health and money worries, and cramped and confined living conditions. More domestic violence helplines and shelters across the world reported rising calls for help.

India too has seen more than a twofold rise in gender-based violence during the nationwide.  Between 23 March 2020 and 16 April 2020 National Commission for Women registered 587 domestic violence complaints, a ~45% increase from the previous 25 days. Factors compounding the situation included the confinement, financial worries due to the lockdown, and lack of access to alcohol. The virus mirrored the pre-existing patriarchal notions and magnified the discrimination and pre-existing inequalities. There has also been a threefold rise in police apathy towards women complaints, with the police busy with lockdown orders.

Founded in 1981, AWAG is active on addressing the issue of violence against women through various approaches wherein raising awareness on gender abuse among the participating communities is considered to be the most vital step in the entire process.

Thus, a series meetings to spread awareness related to gender abuse and means of combating it were conducted for the participating communities. In addition, inputs on maintaining respiratory hygiene and so also that of their surroundings was also touched upon. Strict adherence of wearing facemasks as well as maintaining social distancing at such times was also conveyed to them.

AWAG is pleased to share the Bimonthly Progress Report with regard to our project BUILD CAPACITIES OF 400 DEPRIVED GIRLS IN GUJARAT.

As part of building capacities of adolescent girls and young women at the community level, AWAG organised Youth Leadership Development Workshops for them at AWAG Kendra, Ahmedabad.

A total of 85 young women showed their active participation. The workshop created awareness about:

Through discussions and games, the participants gained insights on the said topics. 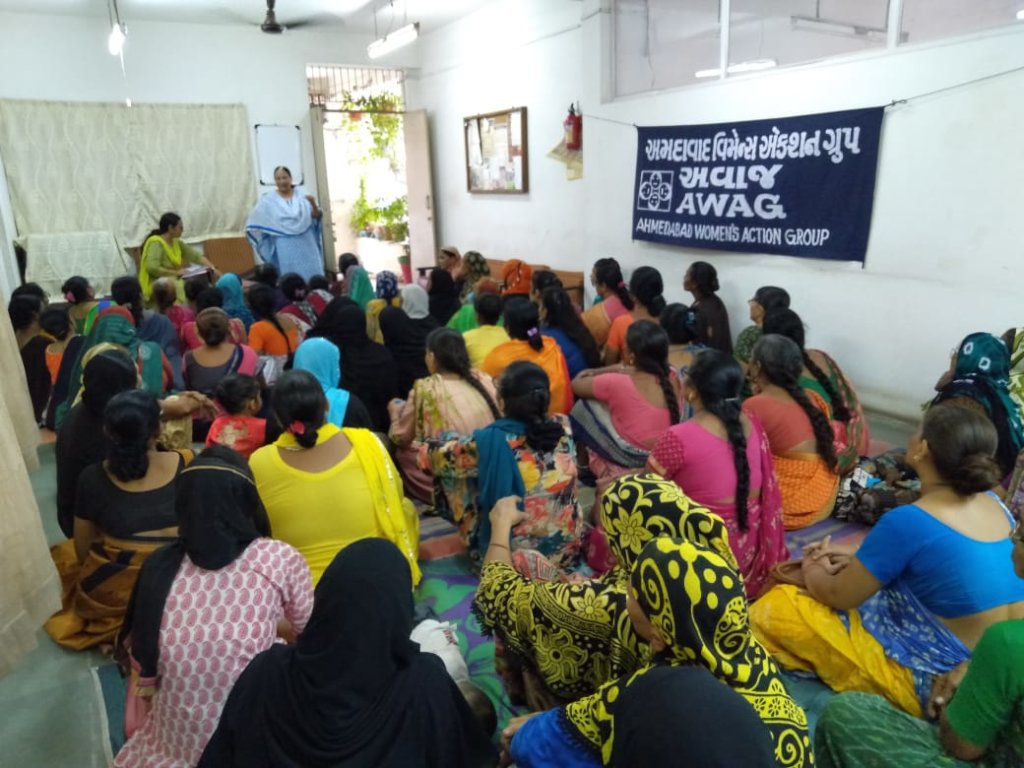 AWAG considers raising awareness as the first step towards empowerment; with economic empowerment as the second. Thus, AWAG has a holistic approach towards women’s empowerment wherein women's rights are considered as human rights.

The conviction to work for the economic betterment of deprived women was strengthened by encouraging and promoting associations and co-operative societies to provide financial support, With this, AWAG NAARI SAVINGS AND CREDIT CO-OPERATIVE took shape and functions as a registered, independent, legal entity.

The Annual Meeting of AWAG Naari Savings and Credit Co-Operative was held at AWAG Ghar, Bapunagar. The annual gathering had the active participation of over seventy-five women who are involved in savings and credit activities.

THANK YOU FOR YOUR SUPPORT! 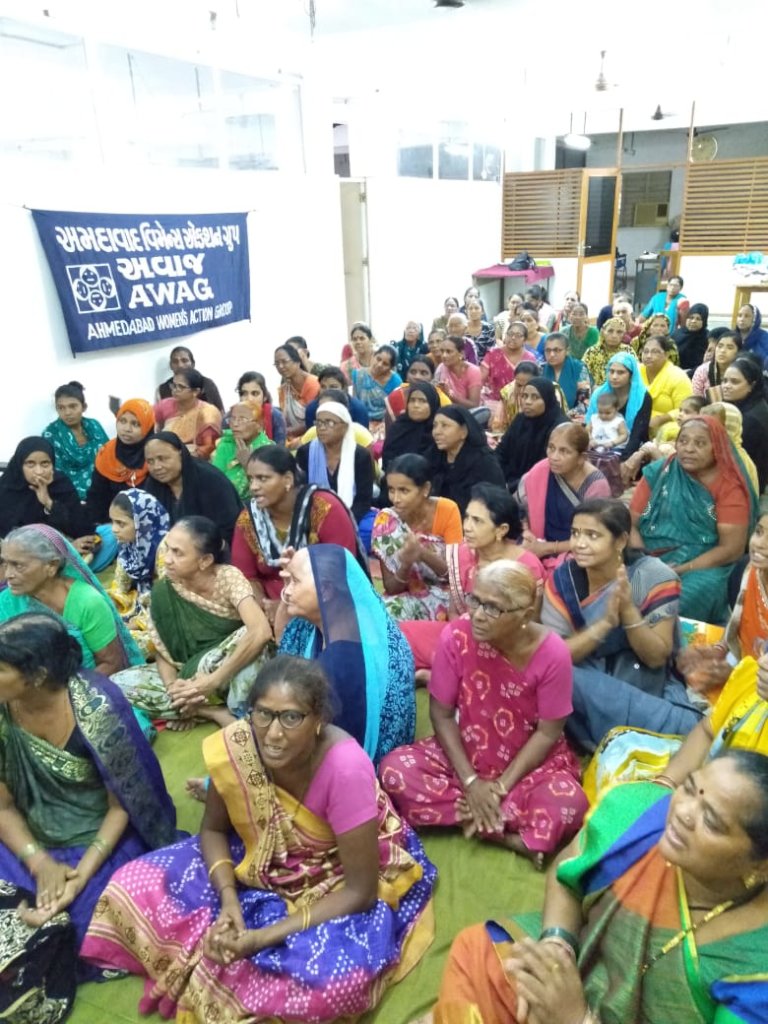 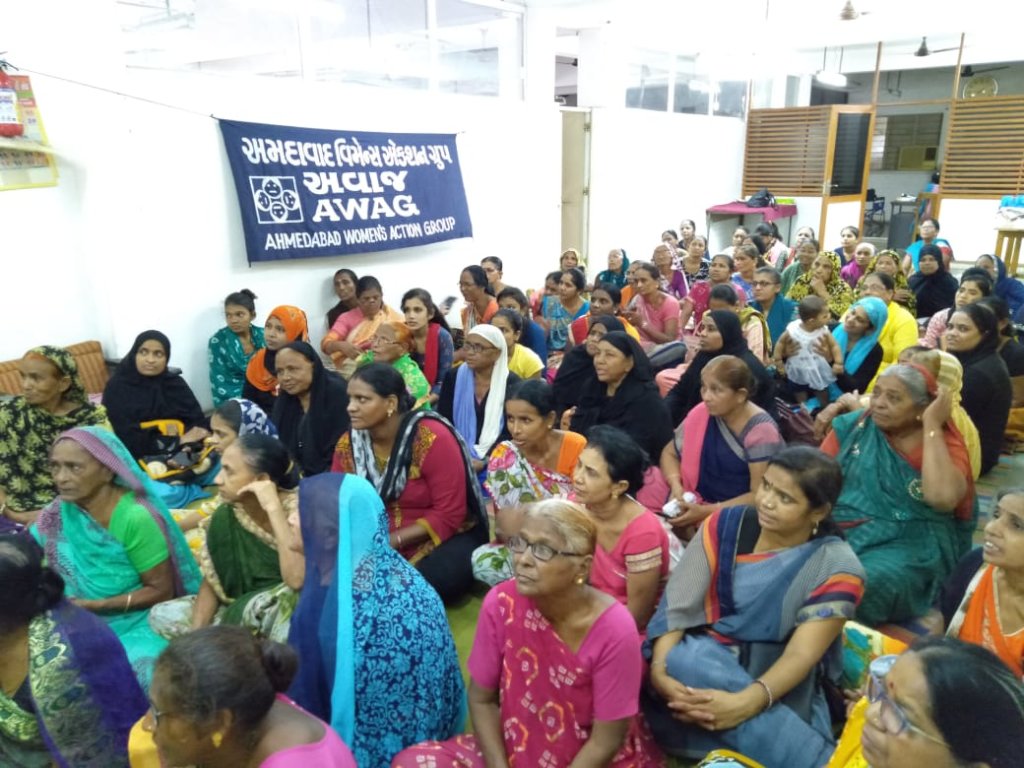 Donating through GlobalGiving is safe, secure, and easy with many payment options to choose from. View other ways to donate
Ahmedabad Women's Action Group has earned this recognition on GlobalGiving:

GlobalGiving
Guarantee
Donate https://www.globalgiving.org/dy/cart/view/gg.html?cmd=addItem&projid=30681&rf=microdata&frequency=ONCE&amount=25
Please Note
WARNING: Javascript is currently disabled or is not available in your browser. GlobalGiving makes extensive use of Javascript and will not function properly with Javascript disabled. Please enable Javascript and refresh this page.