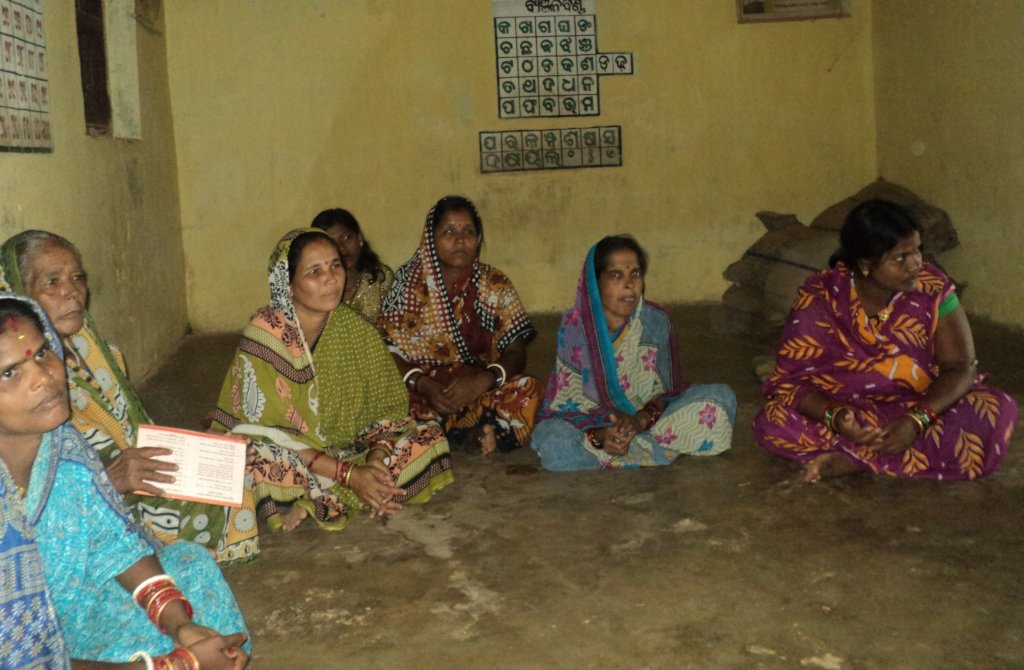 Rural women and people with disabilities remain excluded from economic participation in many ways. Formation of Self Helf Groups is a major approach used by Aaina to facilitate target population work as a single unit with greater bargaining power.

Aaina has organized a training on goat rearing in Ganjam in collaboration with SEWA (Self Emplyed Women’s Association), in Ganjam.

Aaina had conducted training on organic farming in SAMBHAV, Nayagarh and 2 women from this village attended this training. They were highly influenced and took initiative of organic farming as they have land and there is irrigation facility nearby. During the month of November 2018 both the women started cabbage and bitter guard cultivation in their own 1 acre land. By the end of January 2019 they got Rs 20,000 as profit, they will receive another 20,000 each by the end of February.

Currently we are discontinuing with the current project, just to relaunch this initiative with a new objective and scope. We plan to incorporate financial and digital skill building of women and PWD. 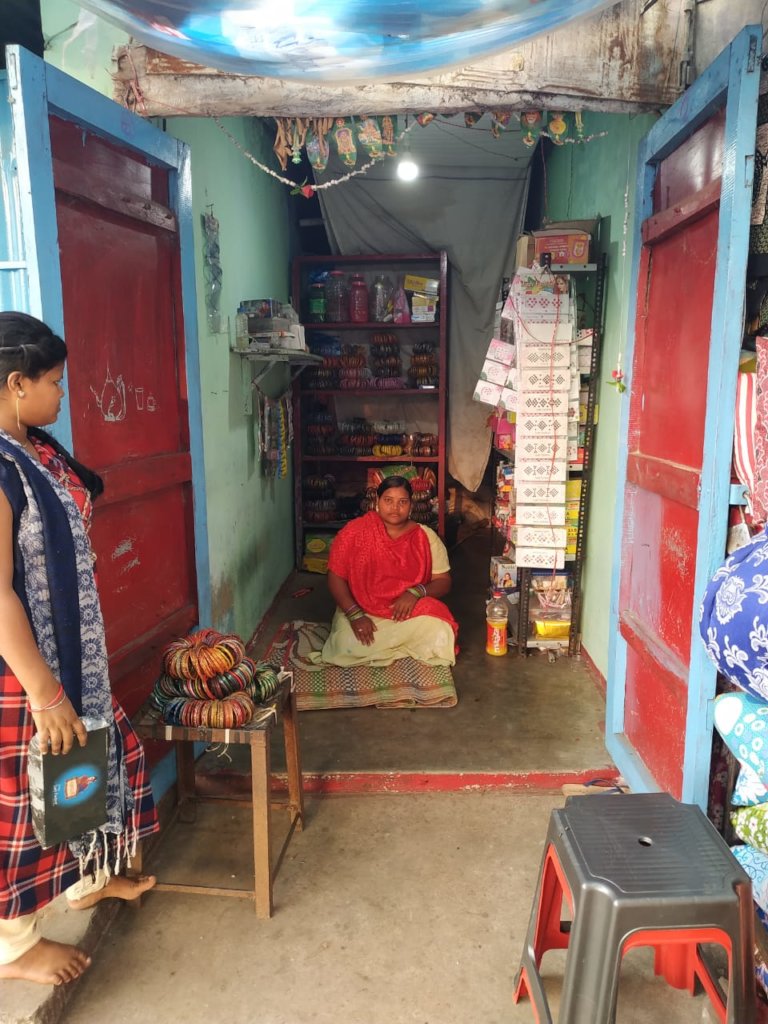 32 year old Namita Sahoo (Name changed) from Tanarad, Ganjam with two sisters, a brother and mother; who worked as a daily waged laborer to manage her household after Narmada’s father expired. However Narmada’s circumstances and her disability never broke her will to move ahead. Aaina discovered her during its survey and came in her aid by helping her in getting loan from SHG through Rusikulya Gramya Bank to open a shop in Bhanjanagar with support from her mother. In 2015, Aaina with support of Rajeev Gandhi Foundation also bought her a side wheeled scooter for her daily conveyance. She now earns about 10,000 -15,000 rupees a month. 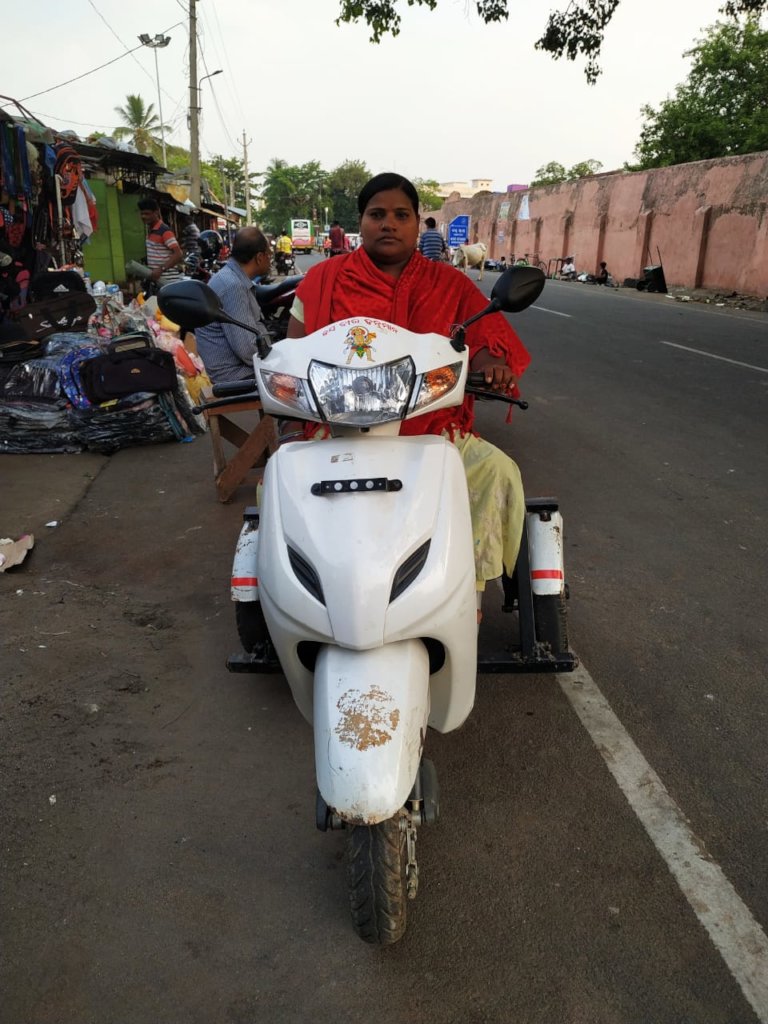 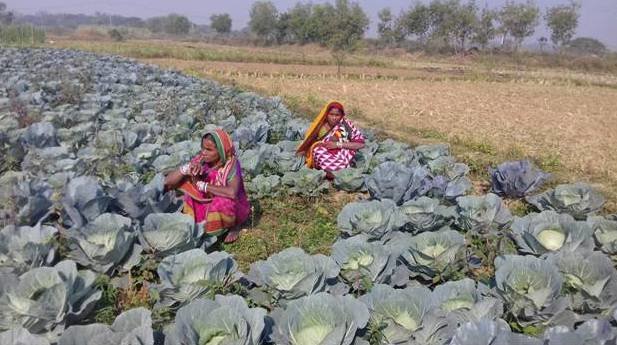 Most of the women were from vulnerable community and engaging themselves in daily labor work which was seasonal. The wages they earned was also insufficient. There was huge gap between male and female wages. Male members were getting Rs 200 and female members were getting Rs 100 only. With this wages it was very difficult to support their family and they were not able to fulfill the basic needs of their family like health and education.

Aaina had conducted training on organic farming in SAMBHAV, Nayagarh and 2 women from this village attended this training. They were highly influenced and took initiative of organic farming as they have land and there is irrigation facility nearby. During the month of November 2018 both the women started cabbage and bitter guard cultivation in their own 1 acre land. By the end of January 2019 they got Rs 20,000 as profit, they will receive another 20,000 each by the end of February. They are highly inspired. Not only they have supported their families but are being able to control over the resources and are part of decision making process in their respective families.

Earlier in this village some farmers were also doing vegetable cultivation but they are investing so much on purchase of hybrid seeds, fertilizers and pesticides along with labor charges. But in this organic cultivation both the women farmers only spent some amount in labor charges rest of the thing they have collected from their own including traditional seeds, cow dung etc.

The funds raised for the project was utilized towards organizing union meetings and purchase of raw materials for organic farming.

These two women actively participated and discussed their experience in the Union meeting and now all the members are interested for organic farming and in coming season 20 women farmers will practice this.

We are extremely thankful for your kind support towards reaching this milestone.

In future, we need to expand our areas of operation. We kindly request you to continue your genuine and valuable support. Please also make your dear friends aware of the same. Every donation matters and we count on you as our trusted partner. 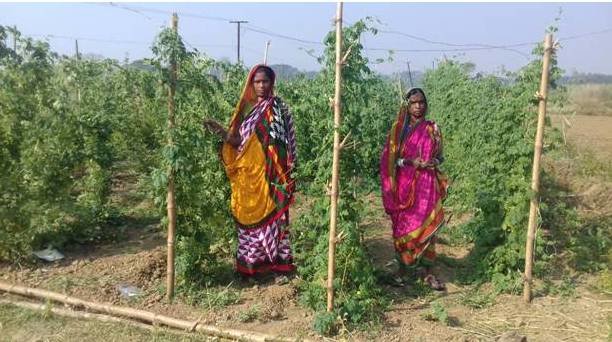 Now I can support my family better 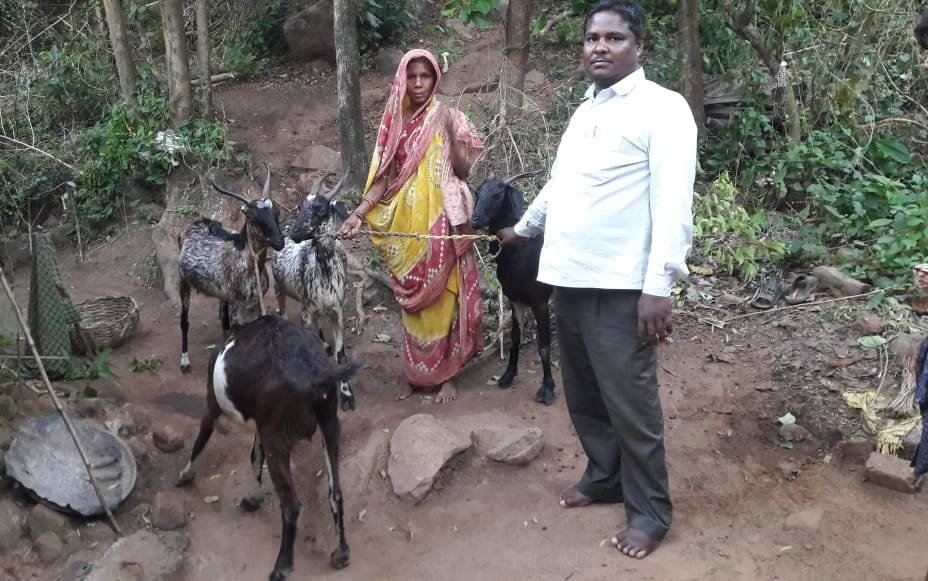 Thank you so much for your generous contribution towards Aaina project. In our community based organization, empowerment of Self Help Group members has become one of the prime needs for sustainability.

Recently rural women under Aaina’s project area have been trained on goat rearing . One of the successful stories is of Saraswati Nayak of Belapunji village, Bhanjanagar district. She was living under poor circumstances both economically and socially. She is from Schedule Caste (perceived as low caste) community as well. Both husband and wife were daily laborers and barely managed to run the family. They have no land and depend upon share crops.

In June 2018 Mr. Tukuna, from Aaina met Saraswati at Block Coordinator meet. At the meet he discussed regarding SEWA (Self Emplyed Women’s Association) union and she was motivated to become the member. Afterwards she convinced other vulnerable women in her village to become SEWA member as well.

In August Mr. Tukuna, Aaina field staff  discussed with SEWA members regarding goat rearing. Initially Saraswati denied taking the initiative due to her poor economic condition. Later with support of her husband she agreed and borrowed Rs 10,000 from SHG and relatives. She bought 4 goats with prior consultation from Aaina staff. Aaina field staff provided her the technical support regarding medication and feeding required for healthy goat rearing. In October one goat gave birth to 2 kids which was very good news for the family because after 6 month they will sell this goat and pay back the loan and also use the profit for the education of their child. Saraswati explains that she appreciates Aaina staffs’ efforts. Through proper training and advice she now knows rearing goat in a healthy manner which will help her in the long run.

Aaina now needs to strengthen SHGs of women established and also motivate women to work as a group instead of individually. Right now training on goat rearing has been an infidel training but Aaina plans to create a group of the women who will work as a single unit for more effective results. Aaina shall need funds to organize trainings in to provide technical skills, market knowledge and demand along with linkage with the market. The trainings have to be on regular bases with proper monitoring and evaluation. All this will require at least 3000 Dollars/year.

As such we kindly request you to continue your genuine and valuable support. Please also make your dear friends aware of the same.Every donation matters and we count on you as our trusted partner.

Note: Name of the beneficiary changed 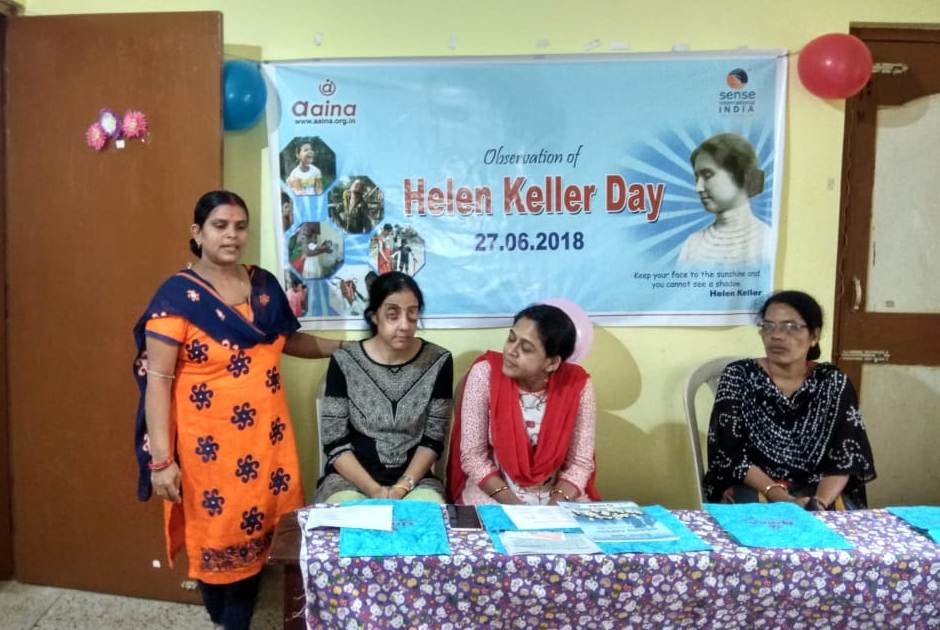 Your support through valuable donations has helped us to carry on with our regular activities of academic help to children with disabilities as well as in conducting special events for children  leaving positive  impact on them and  their parents.

Aaina celebrated Helen Keller Day on June 27, 2018 with children with disabilities visiting center and their parents. The objective was not to make it just a onetime event but to be inspired by the contribution of the amous personality Helen Keller towards the deaf blind communities. Moreover,  create awareness regarding the rights of people with disabilities.

A human chain of 30 children in front of a popular Mall in the city was organized spreading the message of ability and rights. Games were organized such as passing the ball and singing songs. Snacks and soft drinks were prepared for the guests. It was also a time for the parents of the children with disabilities to reflect on there relationship with Aaina and what their views about their children’s progress.

One of the mother’s stated, “for me, the fact that my child is having good time with his friends is enough. He used to be at home most of the time. Now he is going out, learning things in a better way. This makes me very happy. I do not want him to be left out and remain dependent after we pass away”. The staff of center and Aaina office were also present to  celebrate and exchange words of joy and concerns of the parents and children if any”.

It has been your contant support that encourages us to provide need based help to the children and conduct programs that may inspire them in the long run. Please continue the hand holding and also share the project with your dear friends.

Once again thanks for contributing towards a positive change. 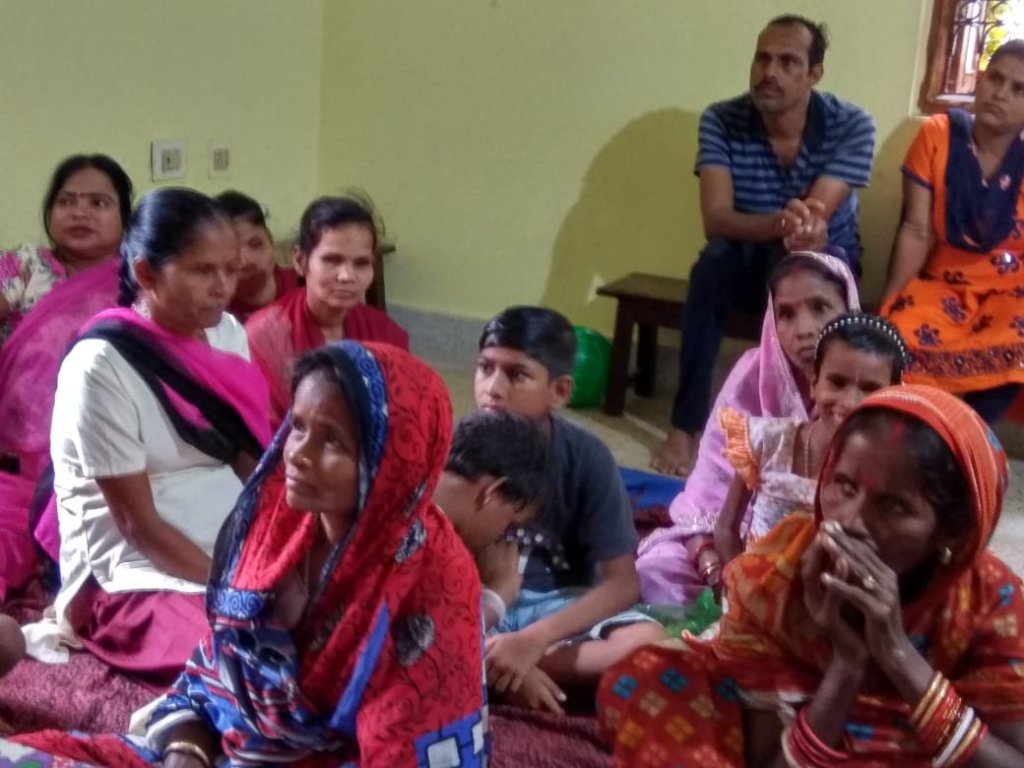 Find another project in India or in Economic Growth that needs your help.
Find a Project

GlobalGiving
Guarantee
Donate https://www.globalgiving.org/dy/cart/view/gg.html?cmd=addItem&projid=28798&rf=microdata&frequency=ONCE&amount=25
Please Note
WARNING: Javascript is currently disabled or is not available in your browser. GlobalGiving makes extensive use of Javascript and will not function properly with Javascript disabled. Please enable Javascript and refresh this page.