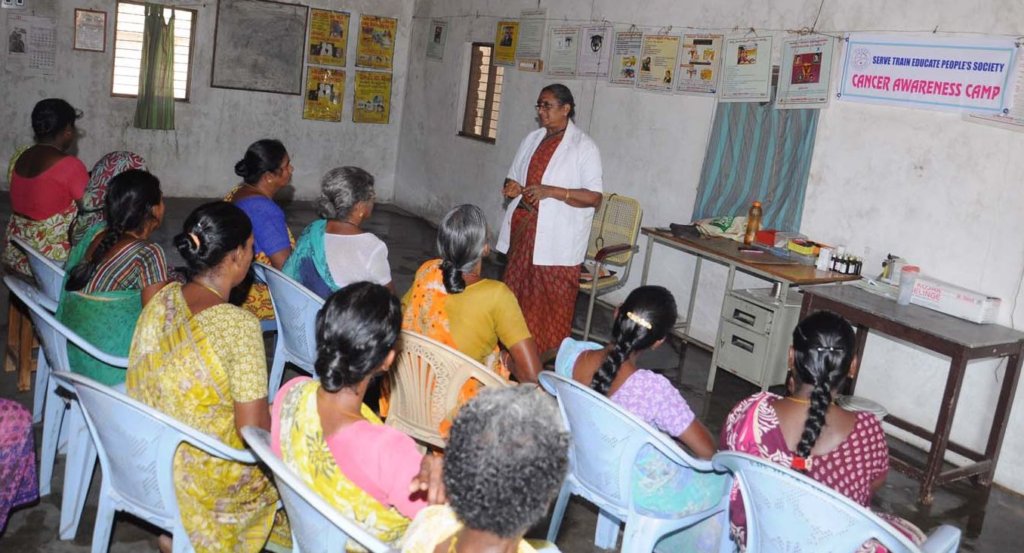 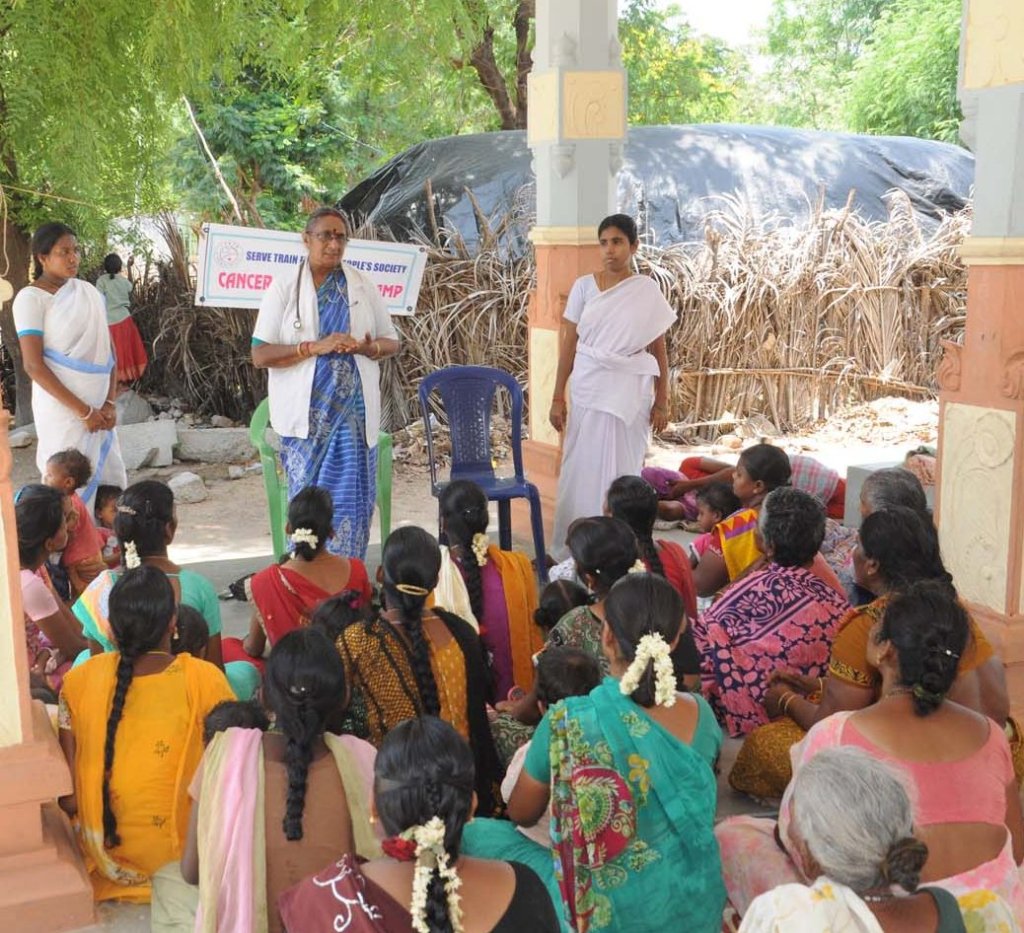 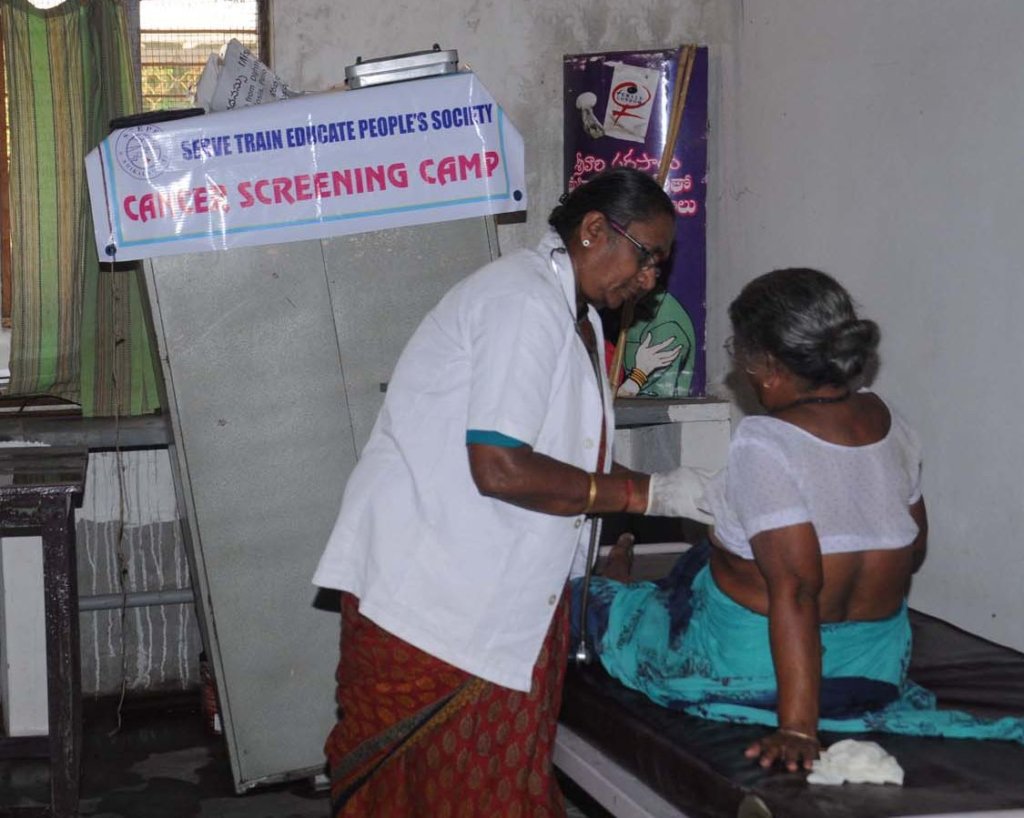 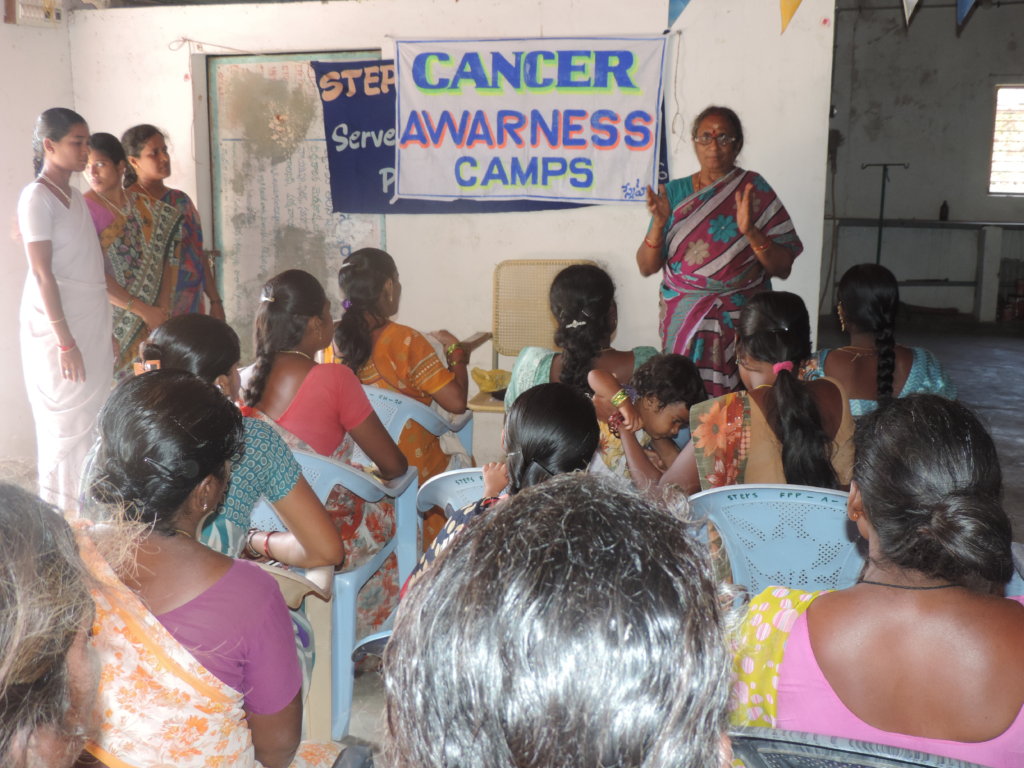 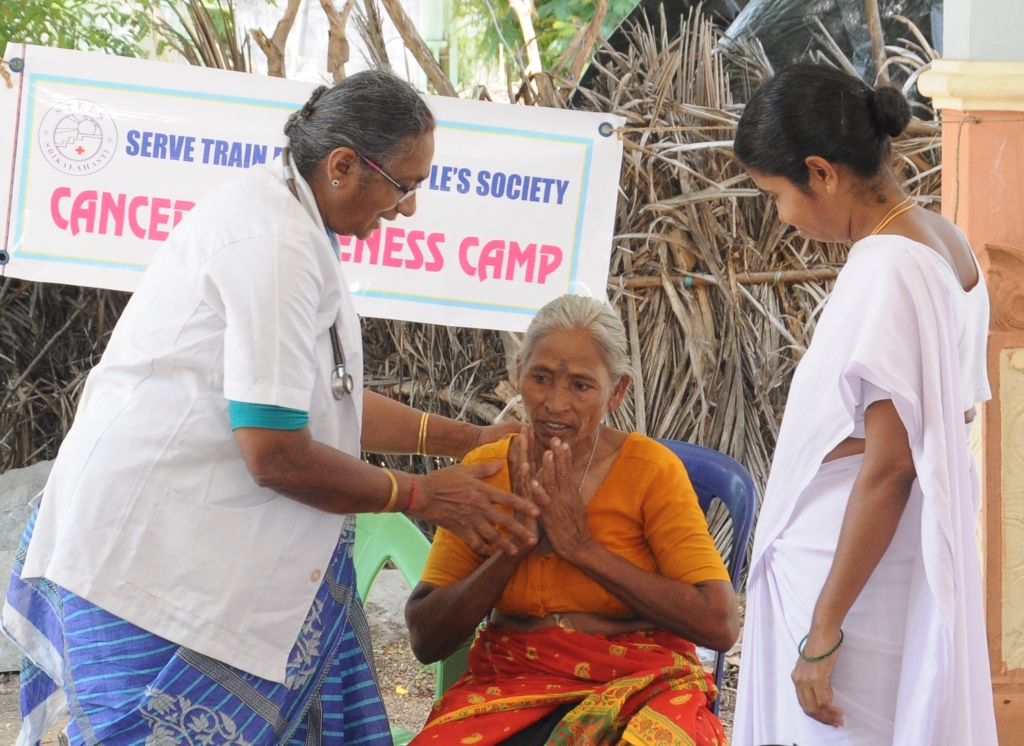 I am presenting report of the ongoing program activities.

Many women living in slums need to be screened to detect caners, but many barriers preventing them for the screenings because the tests and treatment is cost oriented and lack of facilities. STEPS is arranging awareness camps and screening camps in slums regularly. We are organizing the above services free of cost without financial burden on them with the support of donors through GlobalGiving.

During the month of August organized health camp in project street slum. Women were screened for cancers and some women were referred to Higher institution SVRR Hospital, Tirupati for further investigations.

K Kannemma aged 50 years living in project street slum. Her husband Mr.K. Velayudham is daily wages worker. Because of their poverty she did not have medical checkups and treatment for health complications. When STEPS NGO organized Cancer awareness camp and screening camp she attended the camp. After attending the camp Mrs. K.Knnemma said “I have neglected my health and I never had checkups even though I am suffering with gynecological health complications. During that time I have attended Cancer health camp organized by STEPS NGO. After clinical examination and Cancer screening, STEPS Doctor gave treatment and advised me to go to SVRR Hospital for further Cancer investigations. I am thankful to STEPS NGO for timely referring me to higher Institution.” 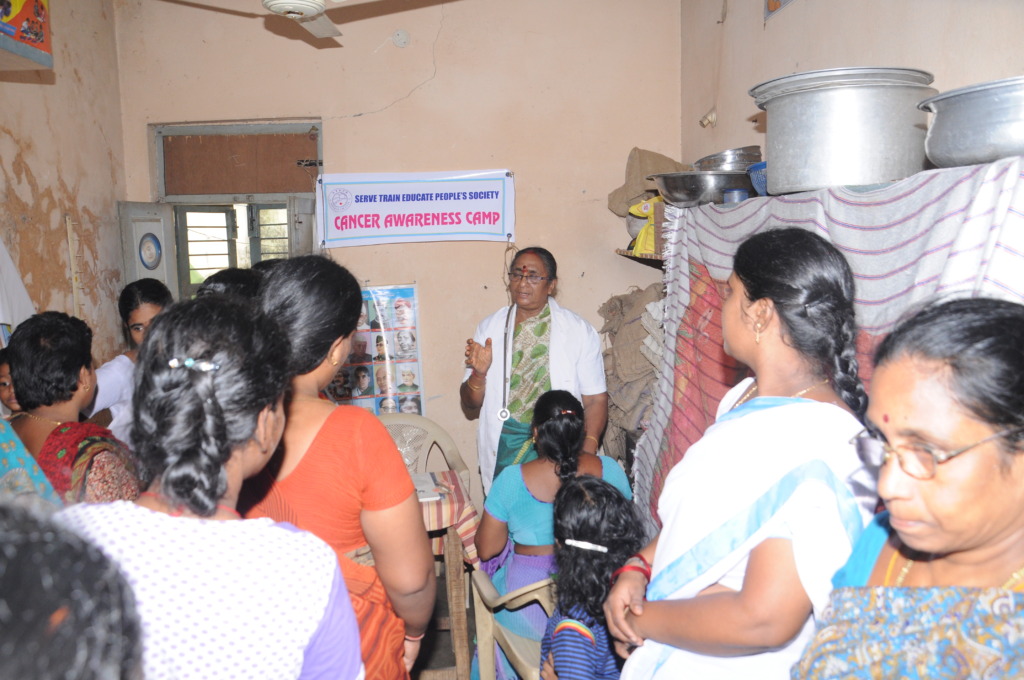 I am glad to present report of the project.

Cancer disease is preventable and treatable if detected early. In slums where healthcare is largely inaccessible, inadequate health centers, lack of knowledge and geographic barriers make it difficult for women to get screened for cancers. There are many women in need of screening and treatment in slums of srikalahasti, India. But lack of resources and other challenging life circumstances create significant barriers to access. STEPS break down these barriers in many ways by providing talks and training that explain the risk factors of cervical and breast cancers, the disease progression, treatment, and the importance of screening. Women living in MG Street slum, Srikalahsti urban area had received little information about their family health and knew very little about their own health in general. They do not know about the causes of Cervical and Breast cancers and how to prevent it and never had screening for cancers. The poorest people in slums live on approximately $2 per day, which simply does not permit paying for treatment, when there is a family to feed and other basic needs to meet.

STEPS has working endlessly to change this and provide information and health services to slum women in need.  Organized Cancer awareness camp & screening camp for women at MG street slum. Explained them how to examine physically by themselves and ensuring  all women were able to undergo preventive screenings.

Varalakshmi aged 28 years belonging to Srikalahasti slum community told  that STEPS medical team would be offering cancer prevention in STEPS Health Centre. She decided to attend STEPS Health Camp and undergo Breast cancer screening.  Varalakshmi admitted that “before STEPS health programs started in their slum, she didn’t actually know what cancers was, but thought she might have some illness and sometimes, because of ignorance, we don’t know what goes on inside us, and we can’t afford getting a checkup. So, when a STEPS arranged health camps and screening camps, we have attended those camps”She says “I learnt many things about Cancer related complications and precautions to be taken. This helped me to clarify all my misconceptions about cancers” After initial screening she was referred to SVRR Hospital, Tirupati for Mammogram.

It is because of supporters like yourself that we are able to provide these health services, saving women from cancers in Srikalahasti, India.  Thank you for supporting STEPS and bringing vital cancer education and screening to vulnerable women in Srikalahasti. 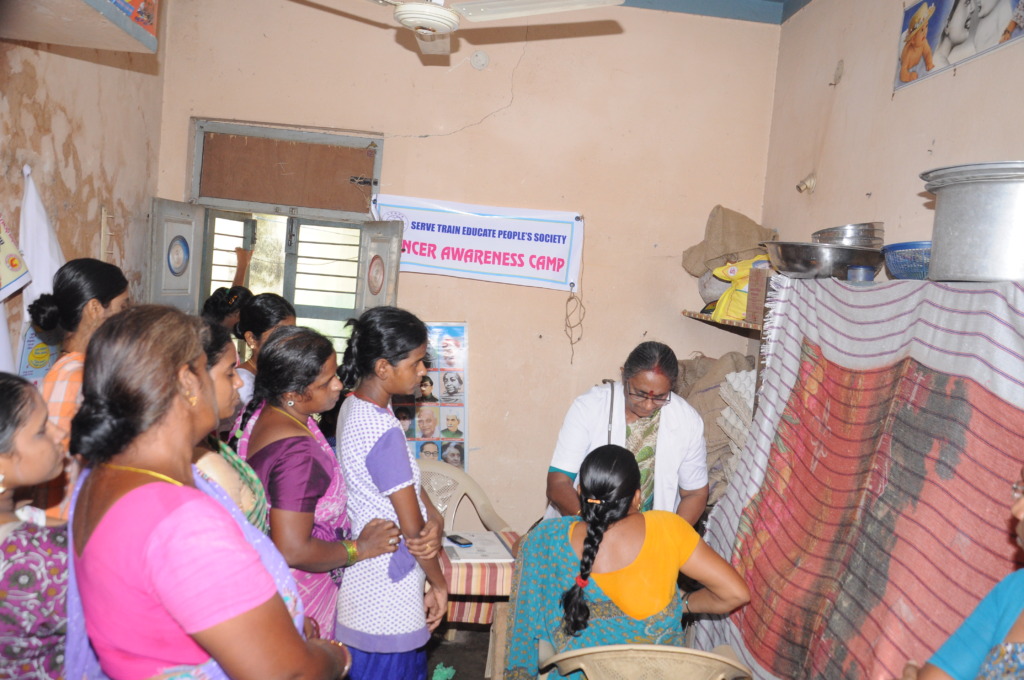 Self examination to know Breast cancers 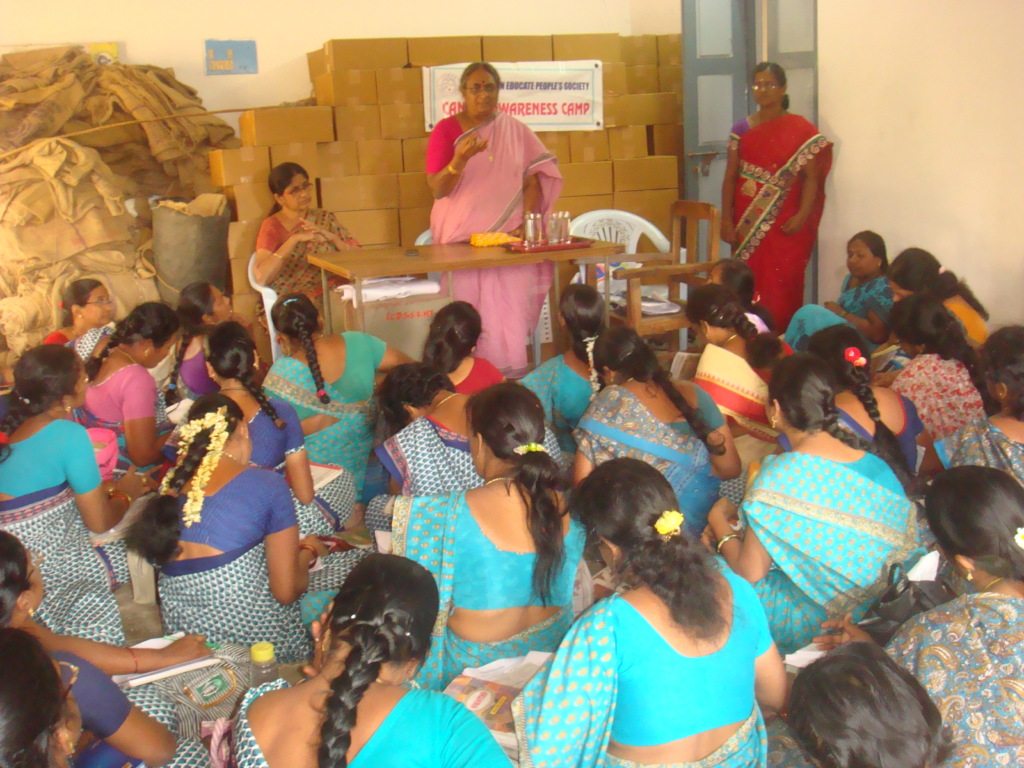 Cervical and Breast cancers are most common type of cancers in India among women. Currently, most patients are diagnosed at advanced stages of the disease, which reduces their chances of survival. They have several misconceptions and often misinformed of cancers.

Poor slum women majority of cancer victims are particularly unable to access to awareness and screening services. There is immediate need for community screening and education to prevent and control cancers.

Cervical Cancer: 80% of the new cervical cancer cases occur in India, which reports approximately one fourth of the world's cases of cervical cancer each year. Women or men aged between 15-50 years and those with multiple sexual partners stands at the risk of developing cervical cancer.In urban areas, cervical cancer account for over 40% of cancers.

Breast cancer:The majority of breast cancer patients are diagnosed with the later stages of the disease. In these stages, patients do not usually respond well to treatments, leading to high mortality rates. So, early detection is associated with better prognosis and higher survival rates, and is therefore considered the key to cancer control. Women do not have knowledge of breast cancer often have several misconceptions. Women at greatest risk are over the age of 50.

Poverty: Poverty is an important issue that has worsened the health situation of. About 60% of the Indian people are poor and 30% are very poor.

The cancer mostly affects middle- aged women (between 40 and 55 years), especially those from the lower economic status who fail to carry out regular health check-ups due to financial inadequacy.

Among the slum population, more than 40% of them live below poverty line where less than half of the population is literate and unemployed. Socioeconomic causes, illiteracy, sexual factors, dietary, hormonal, hereditary factors are playing very dominant role.

This project will enable us to deliver clinical services and enable all women to have a maximum access to cancer screening and awareness services. STEPS will work with the local government, community health workers and establish working systems at the grassroots level for purposes of sustainability, increasing awareness and provision of support at the community level.

Limited treatment capacity: Breast cancer and Cervicalcancer is largely preventable but women need to be screened to halt the deadly disease.Limited access to information on the disease available to women in Srikalahasti slums Program for awareness and screening the disease in early stage is done. Otherwise it will continue to go undiagnosed and untreated.

23 were screened for Cervical  and Breast cancers.

Mrs. Pandari Bai aged 40 years one of the beneficiaries shared with our team and says “I am truly grateful to STEPS for screening me for breast cancer and advised me to have Mammography test. Now I will motivate other women for screening of cancers. This work is important for women and I wish STEPS can keep doing it.”

Thank you for supporting this project and bringing vital Cervical and Breast cancers awareness, education and screening to vulnerable women in Srikalahasti. 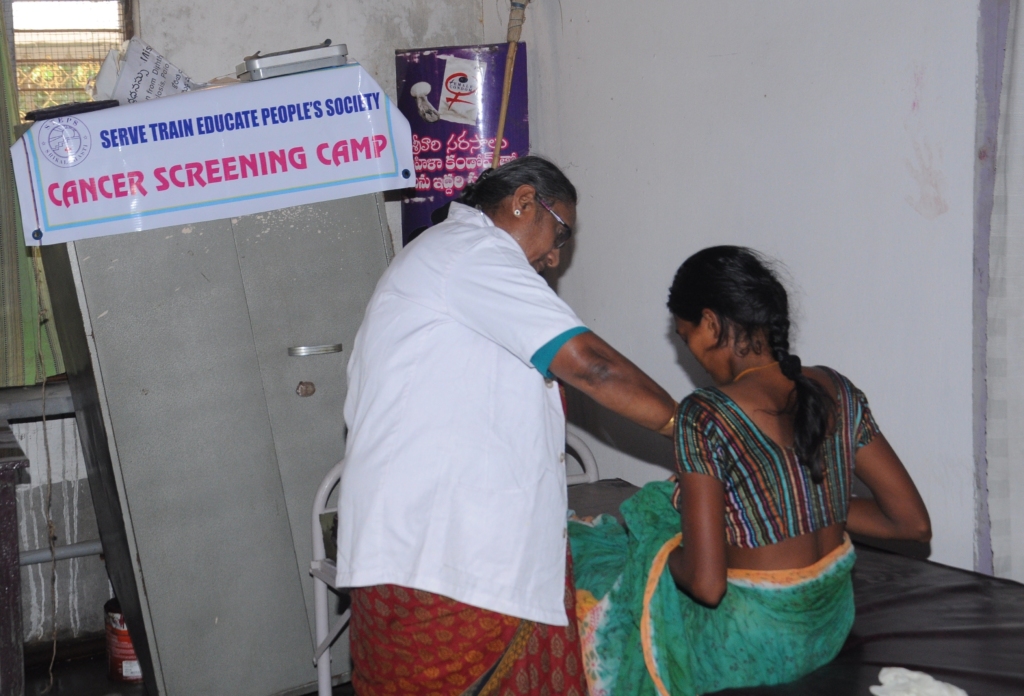 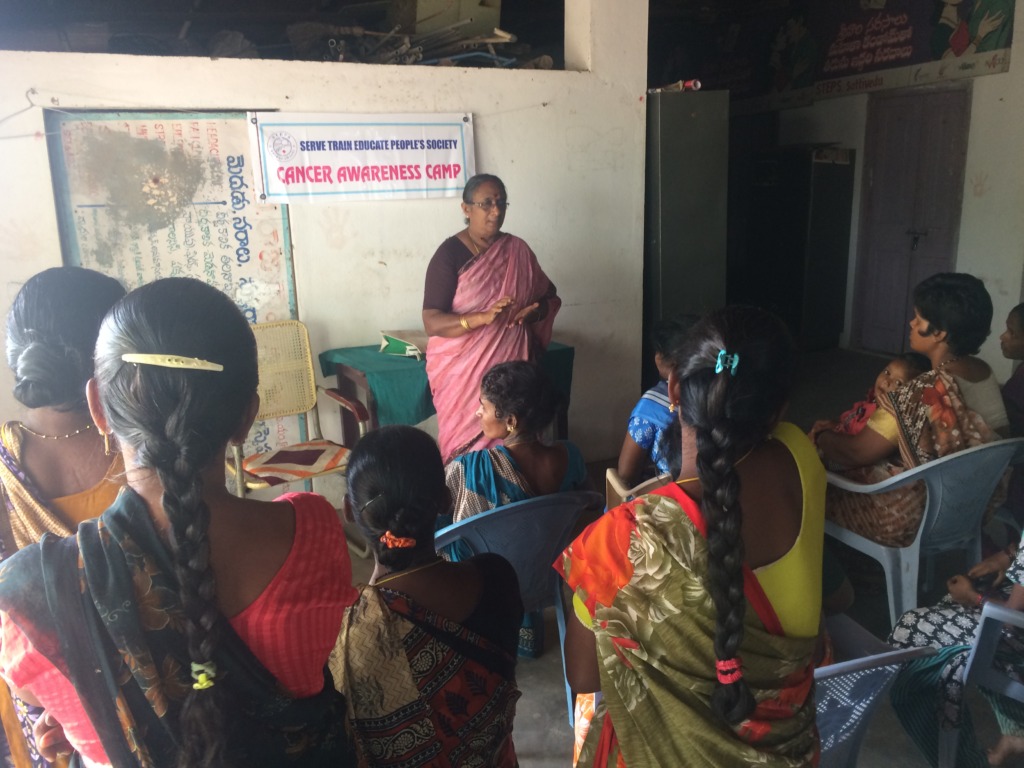 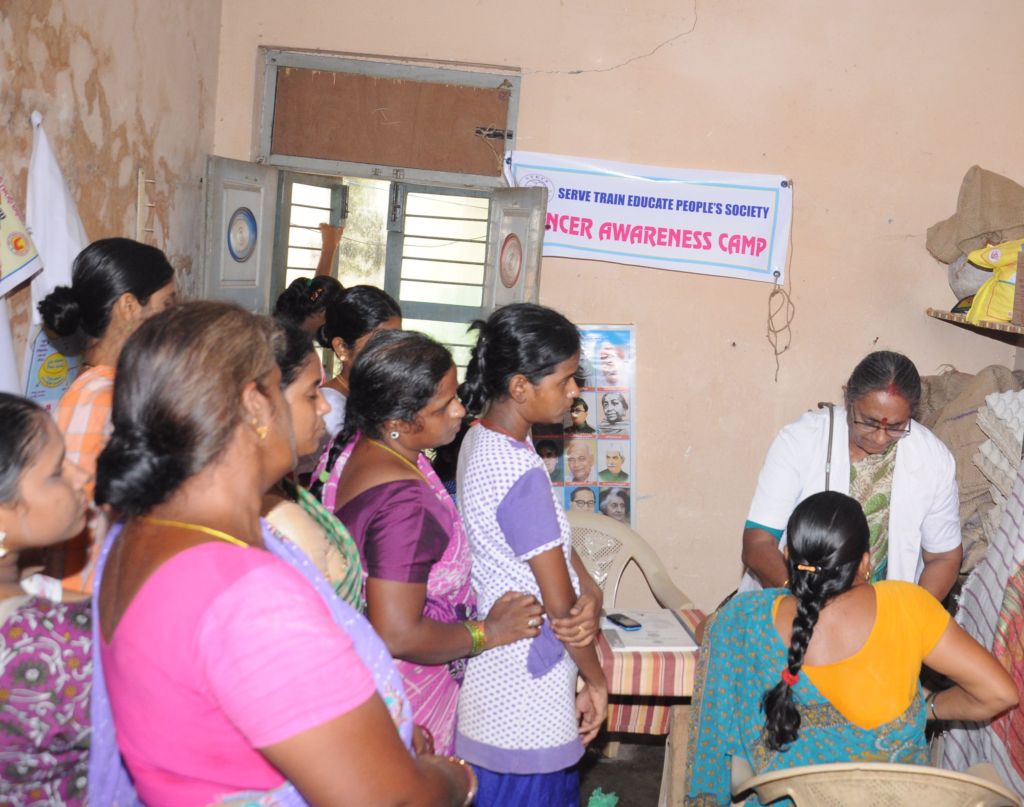 Wishing you a very happy and prosperous NEW YEAR   2017

I am glad to present report of this new project.

We have started this program recently and organizing awareness meetings & screening of women living in slums of Srikalahasti municipality in Andhra Pradesh State, India. During these camps, Dr Prameelamma explained to women about Cancer disease symptoms and self examination of breast to find out the symptoms of cancer.

Mrs. Sujatha, Self Help Group (SGH) leader, who attended the awareness meeting, requested President, STEPS NGO to organize more camps for the benefit of women in Srikalahasti town and expressed her willingness to act as volunteer during the camps.

We need your support and kindly consider donating to continue this program for slum women. Tell to your friends and family to bring in more support. This will benefit the poor people living in slums in a big way.

Thanks for your contribution 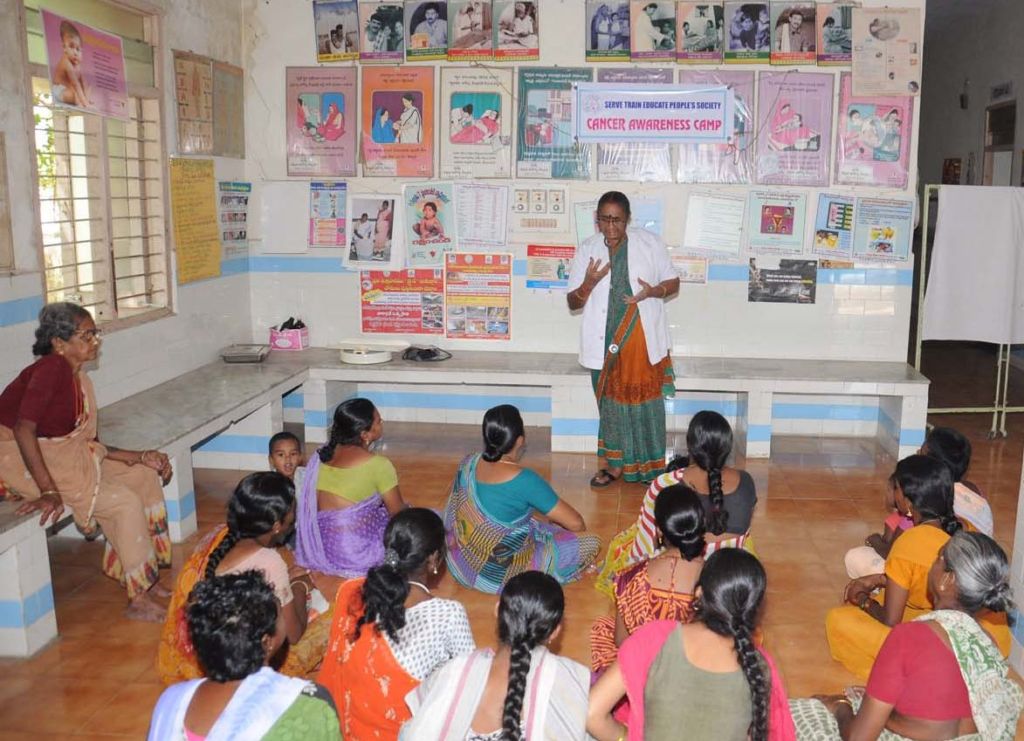 GlobalGiving
Guarantee
Donate https://www.globalgiving.org/dy/cart/view/gg.html?cmd=addItem&projid=25258&rf=microdata&frequency=ONCE&amount=25
Please Note
WARNING: Javascript is currently disabled or is not available in your browser. GlobalGiving makes extensive use of Javascript and will not function properly with Javascript disabled. Please enable Javascript and refresh this page.