A microproject by Aroh Foundation 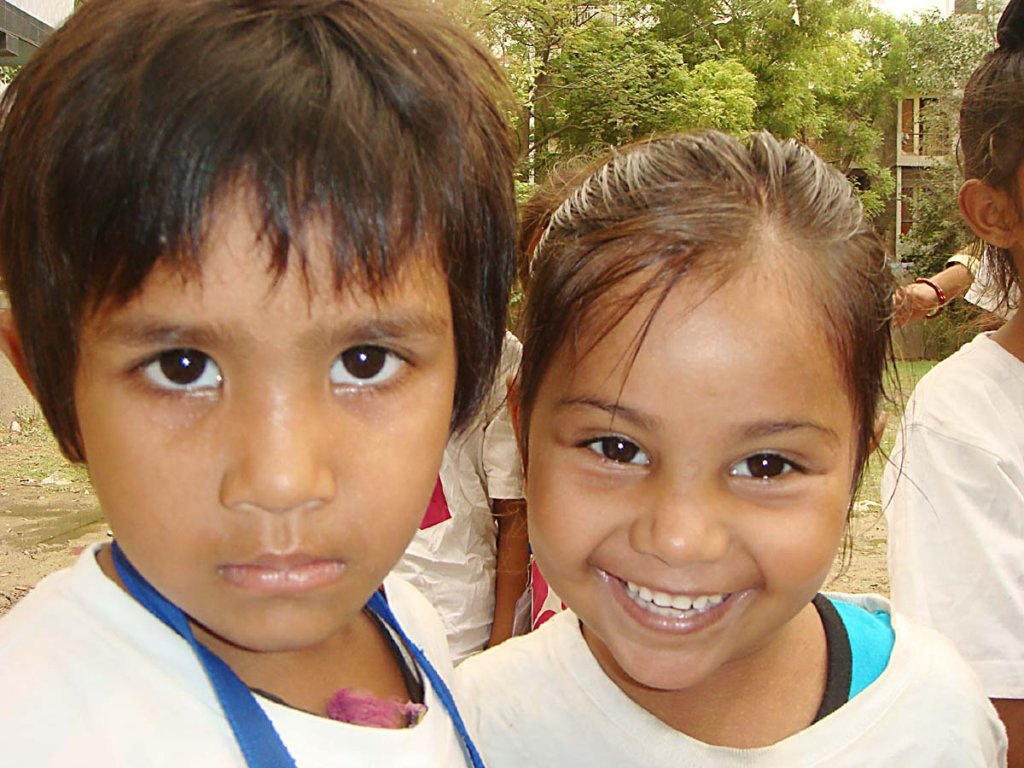 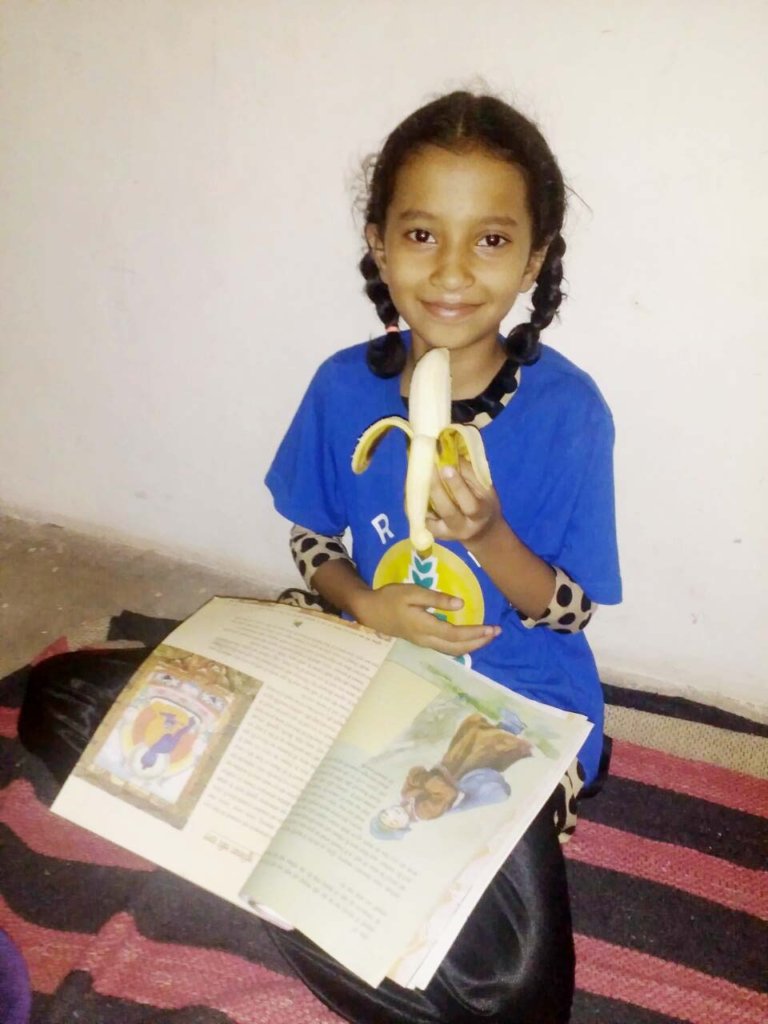 Malnourishment… a curse to development

No country can afford to risk its valuable assets which are its youth children. However, in developing countries like India, children fail to achieve their full potential and growth. One of the causes is malnutrition and deficiencies which permanently damage their health and abilities. Short-term hunger and nutritional deficiencies limit children’s performance at school. Increasingly in this world, it is intellectual resources, not natural or physical resources that determine national power. How can a nation like India compete internationally when 20–50 percent of its population is intellectually compromised? Besides affecting physical growth and development, malnourishment is seen to cause behavioral problems. Undernourished children lack energy, so they become less curious and playful and communicate less with those around them, which impairs their physical, mental and cognitive development. In the classroom setting, even a single child’s behavior can affect the rest of the students, the teacher’s attention and the overall learning atmosphere. Hunger not only disturbs the affected child’s learning, but impacting others too. Since the child survival revolution has saved so many children’s lives and Right to Education has ensured primary education for majority of the children, it was now the right time to focus on the quality of life and health of the survivors.So there is a critical need to feed and nourish the children, the future!

A holistic approach to the issue of undernourished children

Maintaining a balanced diet and regular exercise was important for 500 slum children enrolled for remedial education with AROH Foundation in the Sangam Vihar Slums of National Capital Delhi. These are government school going poverty stuck and malnourished. Since these children were already struggling to get their daily meals, food item with instant and better energy content were planned to meet various vitamins and essential nutrient supplements.

Donors' generous contribution was utilised to reduce malnourishment in 500 slum children for a period of 6 months. Daily supplements were introduced to all children in order to ensure impactful outcomes from the initiative. Selection of food items was done on the basis of their existing diet patterns, the food intake at home and at school through mid day meals. Children were given ready to eat nitritive foods such as milk, biscuits, fruits and juices on daily basis.

Children were given freshly procured fruits from local markets at the end of classroom sessions. A drastic change in the classroom ambience was been witnessed, absenteeism from class has reduced and a cumulative impact of regular nourishment, health checkups and activities has given visible and positive results.

We also did pre and post health analysis of sample of children, which has shown positive inclination towards the results. Hunger not only disturbs the affected child’s learning, but the learning of others as well. To combat this barrier, children are provided with nutritional supplements in the form of milk, juices, fruits etc time to time ensuring better health.  Thus ensuring a healthier child!

Neelam, 11 years is a bright girl studying in RISE holds high aspirations in life. Absolute poverty in her family had deterred the pursuit of her education. Because of financial crisis, Education was not deemed to be of much importance. Not just her education, but financial struggles had taken over her health too. She was usually dizzy, inattentive and low in the class. Despite motivating educators, children were lagging behind in their performances. The reason was not in the brain but in their stomach. They were severely malnourished, anemic and clogged with unknown and unidentified diseases.  When Neelam went for her health check she was diagnosed as an anemic with a measure of 10.5 g/dL and a BMI of 14.6.

With the kind donations of generous donors from GlobalGiving, AROH has been adding continuous nutritional supplement to all 500 children to combat these issues. Not just timely supplements but regular health checkups, medicines and counseling have helped many like Neelam to attain a better frame of health and brain. Now, after 4 months, Neelam has better hemoglobin level of 13.6 g/dL (which is normal) and a better BMI of 15.6 (which still is under weight).

We have started with baby steps to curb down a giant problem of India. This was impossible if generous fund raisers from GlobalGiving had not pitched in for the mission. Results have been amazing within a very short span of time. We’d like all of them to know that your thoughtfulness is truly making a difference in the lives of so many under privileged slum children and that each of them knows that there is someone watching and taking care of them! 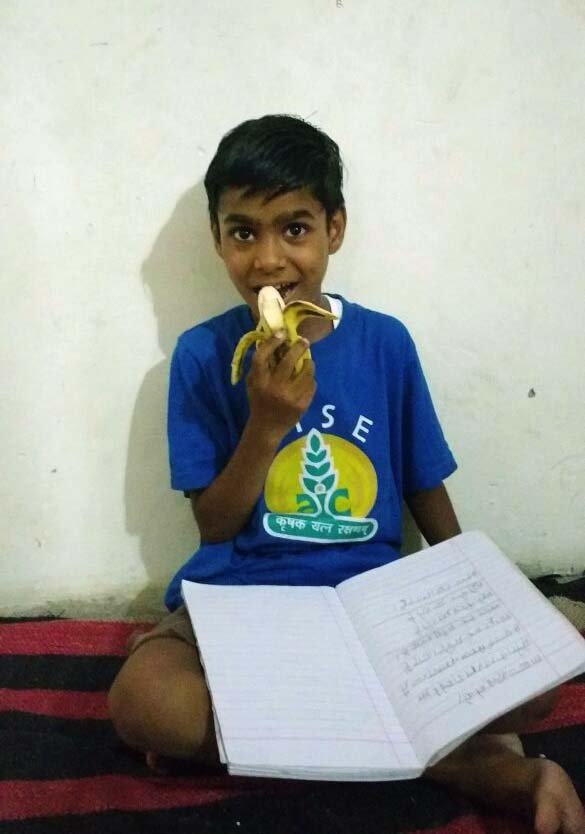 a step towards healthy future 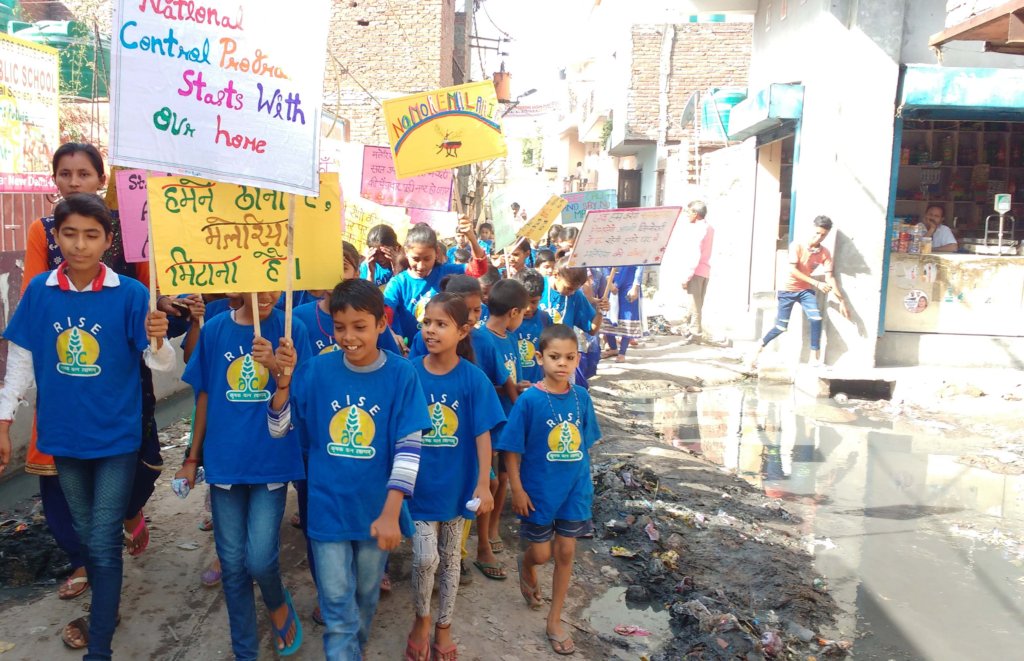 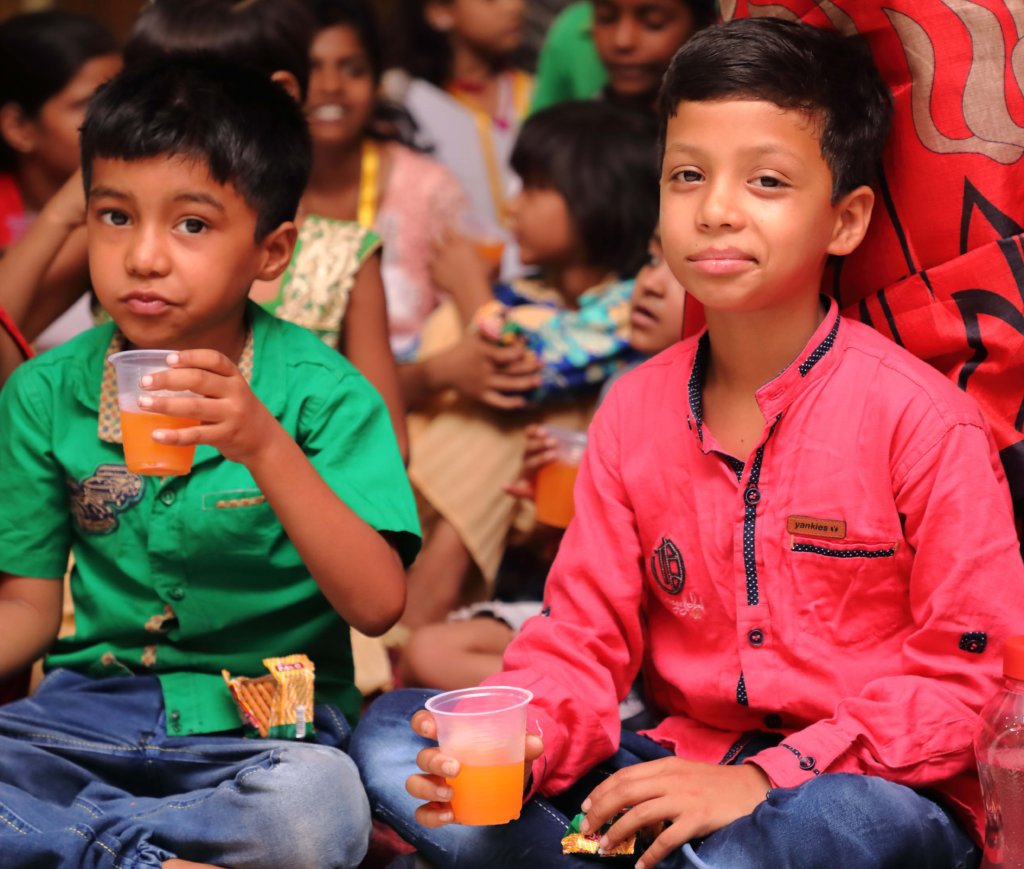 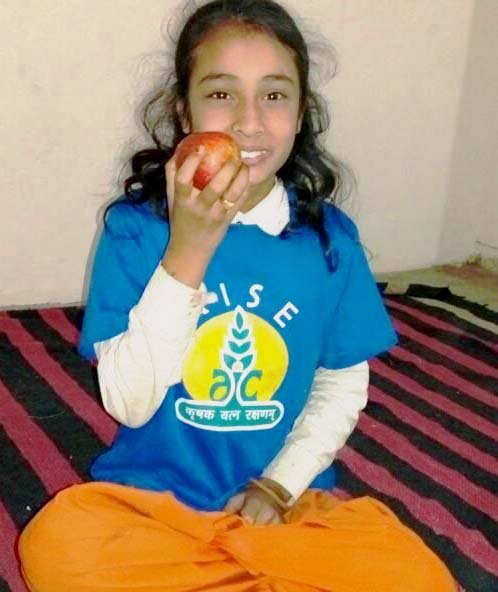 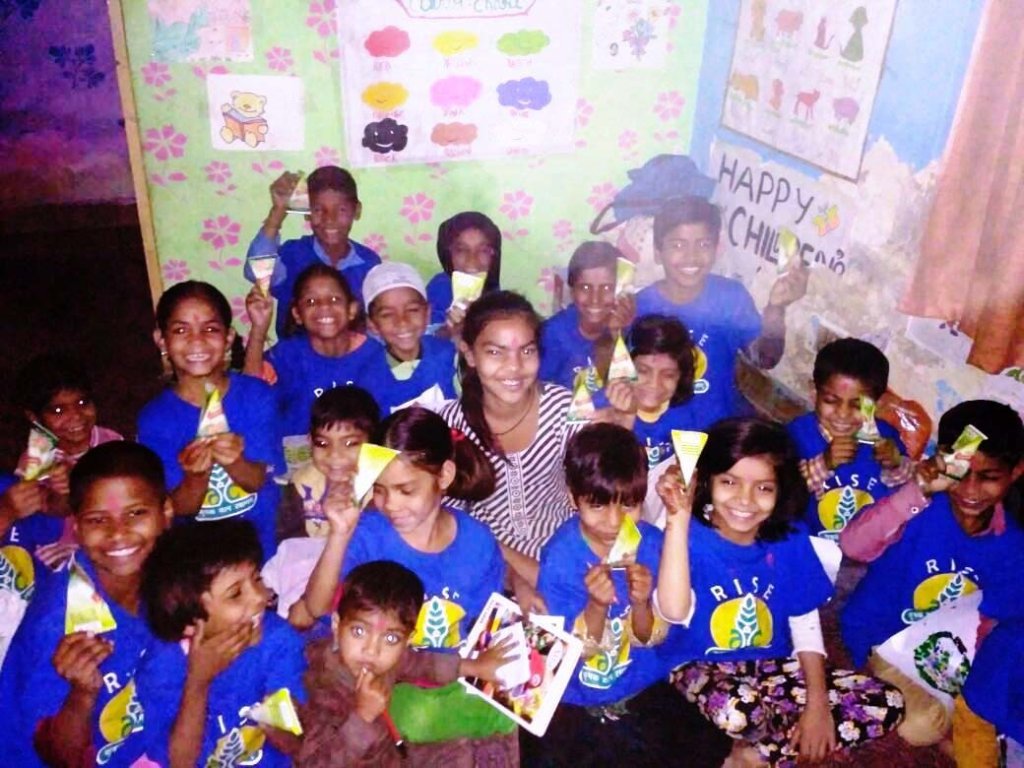 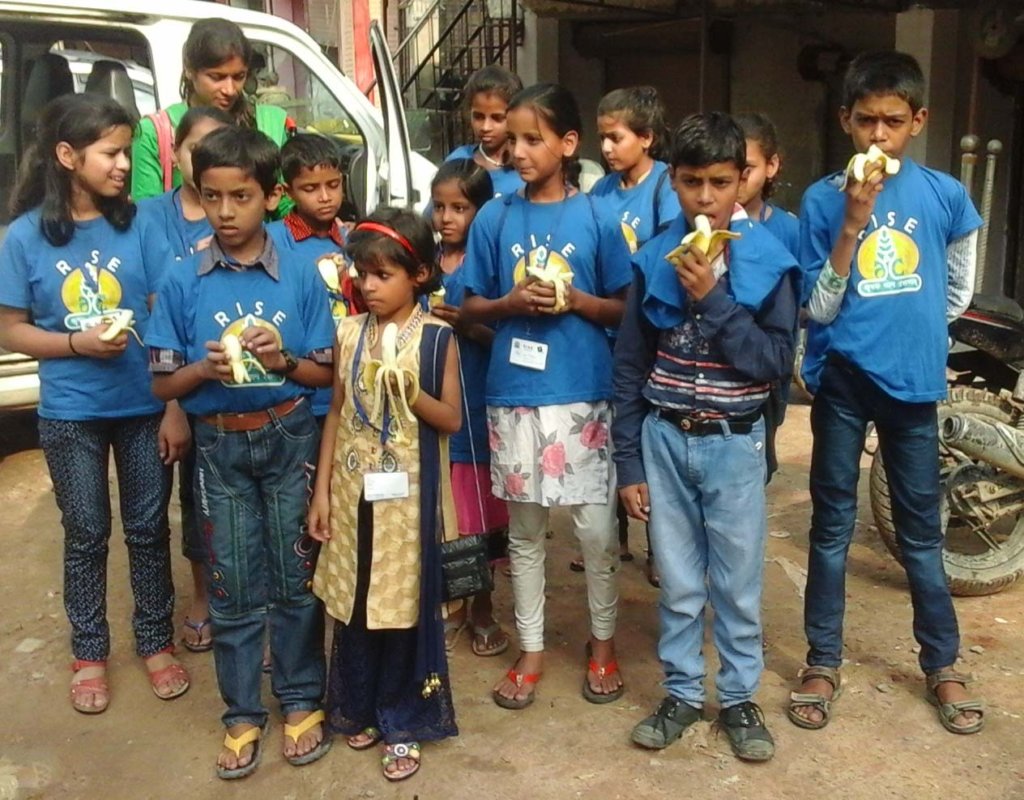 Banana distribution on an outing 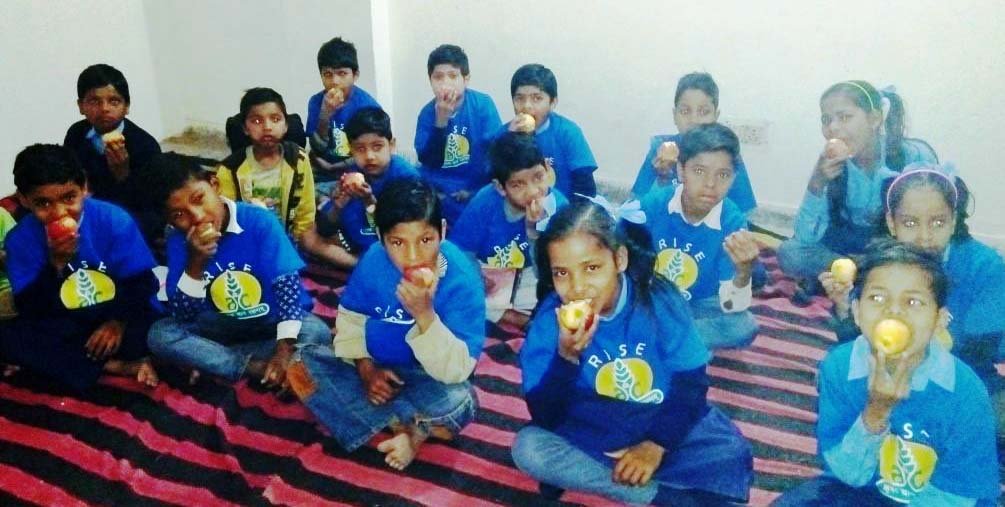 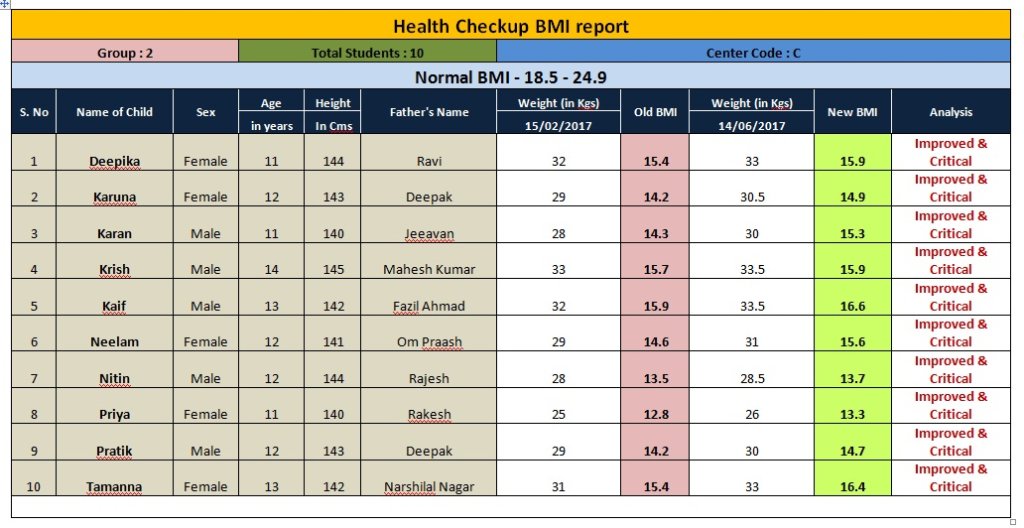 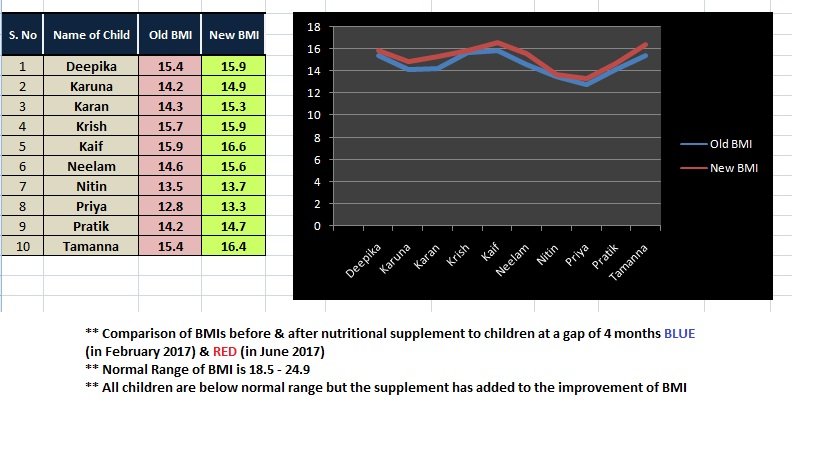 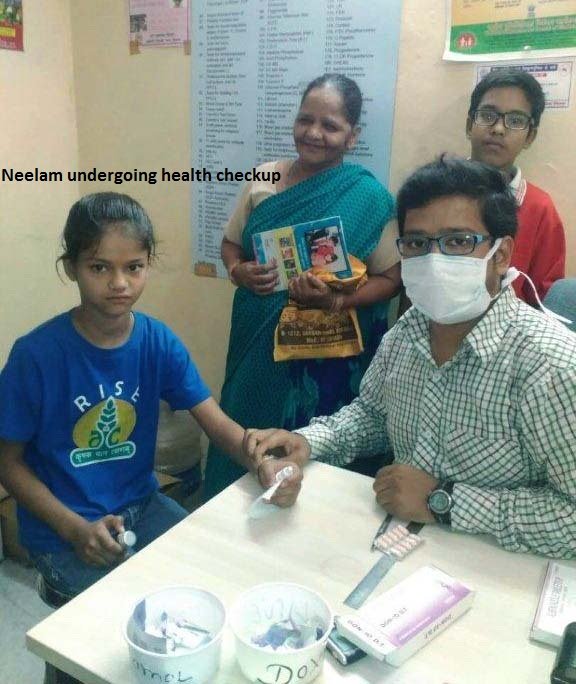 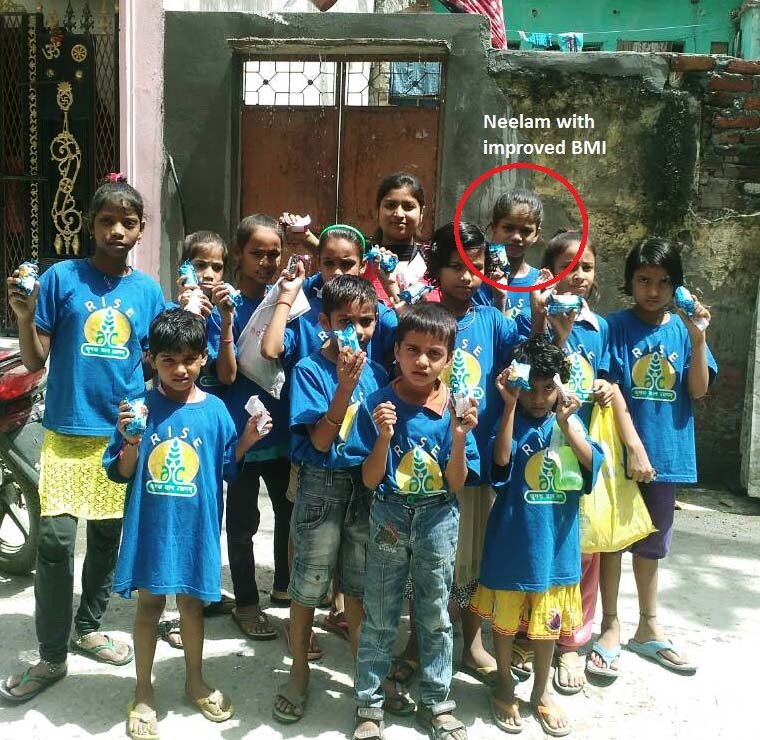 Neelam in the group after check and supplement 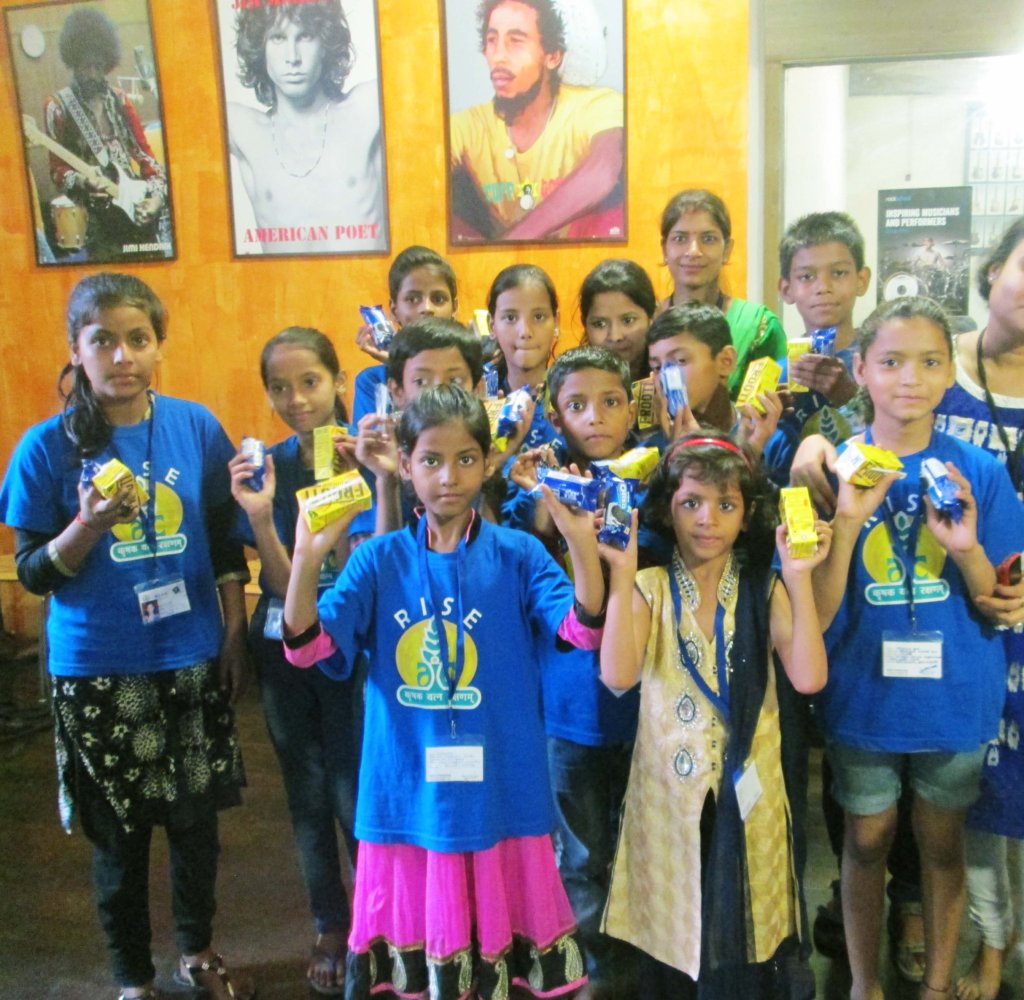 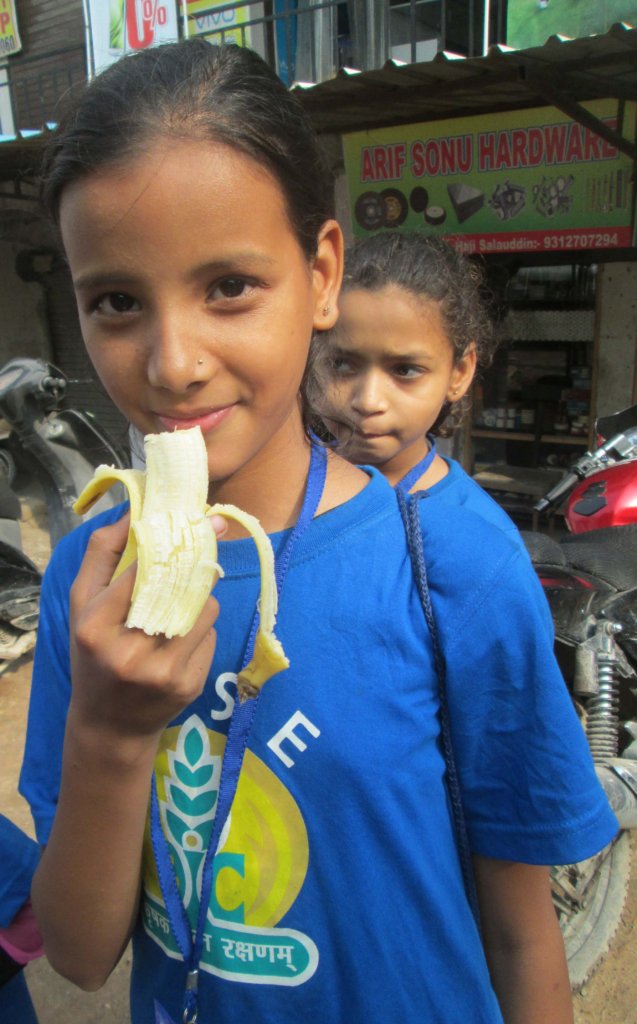 Saying NO to Child Hunger 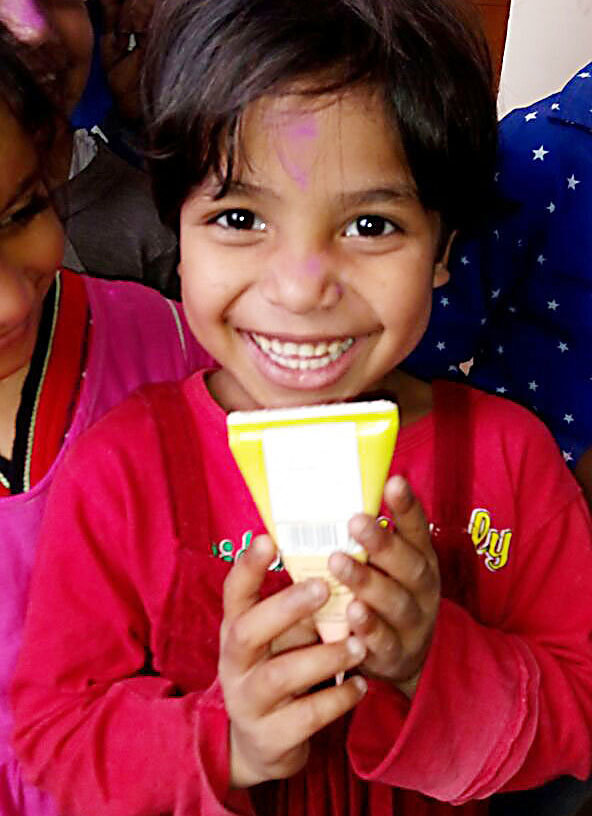 Saying NO to Child Hunger!

39 per cent of Indian children under the age of five show stunted growth while 15 per cent are wasted – which means they are getting so little food, it increases their chances of dying significantly. The lack of food available for Indian children, amongst other factors, means that that a shocking one out of every twenty children die before their fifth birthday.

When they grow slightly older and go to school, hunger and malnourishment become barriers in attending school and learning. Reports reveal that children are not able to learn on empty stomachs. Their minds are adversely affective and so is their cognitive ability.

With generous support from donors like you, AROH undertook the mission to provide food supplements to 500 children who are enrolled at the learning centres in operation in slum of Sangam Vihar. The outcome was tremendous! Not only do children feel happy and satiated, but it has improved their interest in attending the school and participate in learning activities.

The children are being provided either a fruit or biscuits or milk to supplement their daily diet. Many of the children are not even getting full meals, leave alone nutritious items like fruits and milk. Our initial tests revealed that more than 80 per cent of the  children were malnourished and anaemic. Another test done after giving them regular supplements has shown an increase in their body weight and reduction in anaemic levels. They seem be more active and willing to participate in learning exercises and projects.

“We are indeed grateful to people who have helped in providing dietary supplements to our children. They are more active and interested. Moreover, they never miss a class now!” says Lata, our educator at one of the centres.

Parents are also thankful for this support to keep their children happy and healthy. “Our income is not enough to buy milk and fruit for our children. We struggle day and night to provide for two square meals and often even that is a luxury. We thank all those who have shown such concern and care for our children. They are now interested in going to school and study and we can see hope in their eyes”.

With your support today more than 500 children have got dietary support enabling them to become healthier and happier. They can now expand their wings and fly! A big thanks to all our donors! We hope such support will keep flowing to help us reach out to more and more needy children. 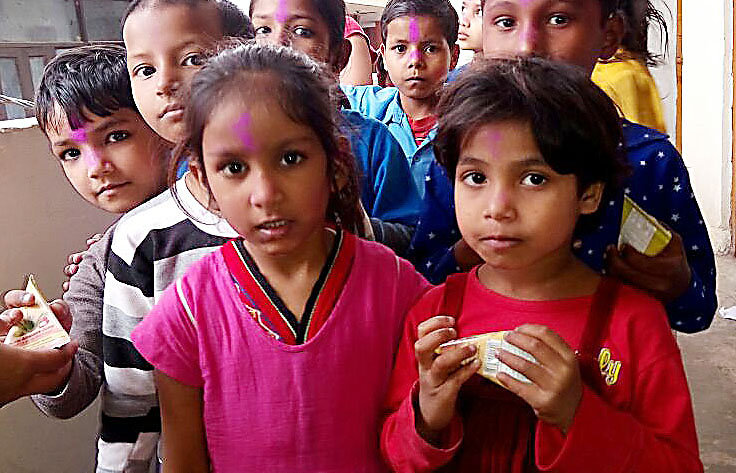 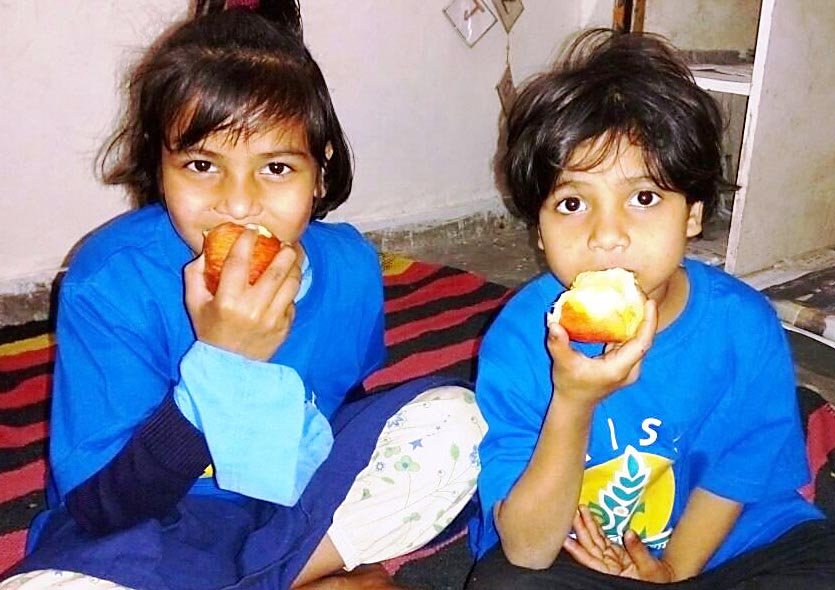 An apple a day! 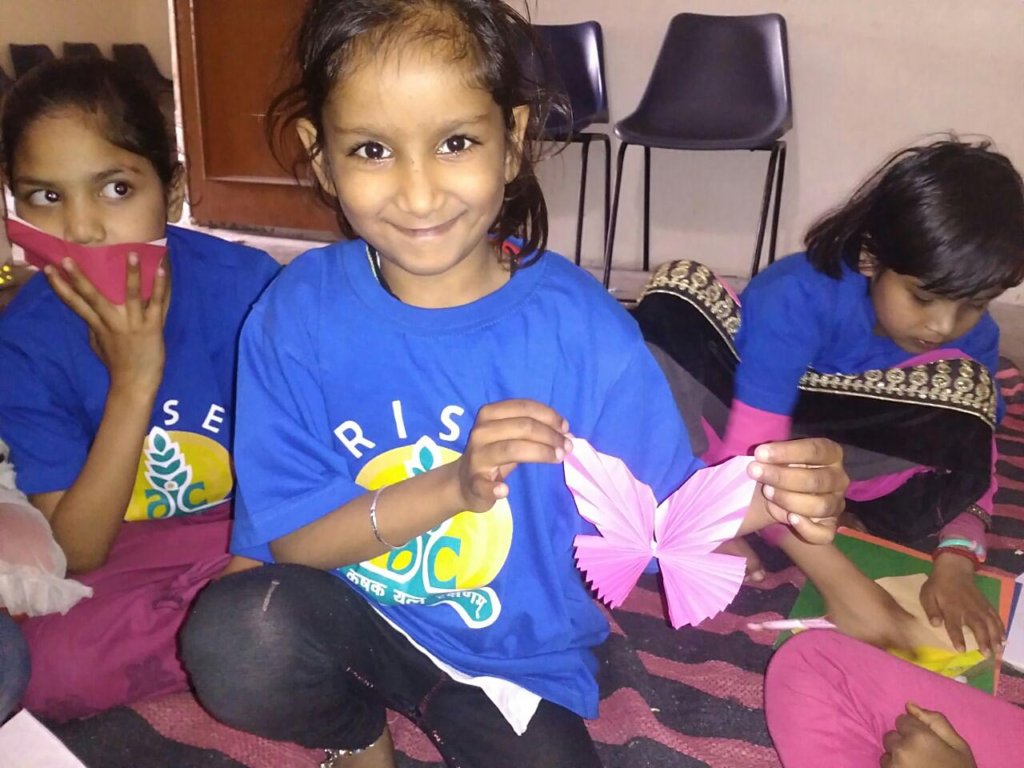 GlobalGiving
Guarantee
Donate https://www.globalgiving.org/dy/cart/view/gg.html?cmd=addItem&projid=27432&rf=microdata&frequency=ONCE&amount=25
Please Note
WARNING: Javascript is currently disabled or is not available in your browser. GlobalGiving makes extensive use of Javascript and will not function properly with Javascript disabled. Please enable Javascript and refresh this page.