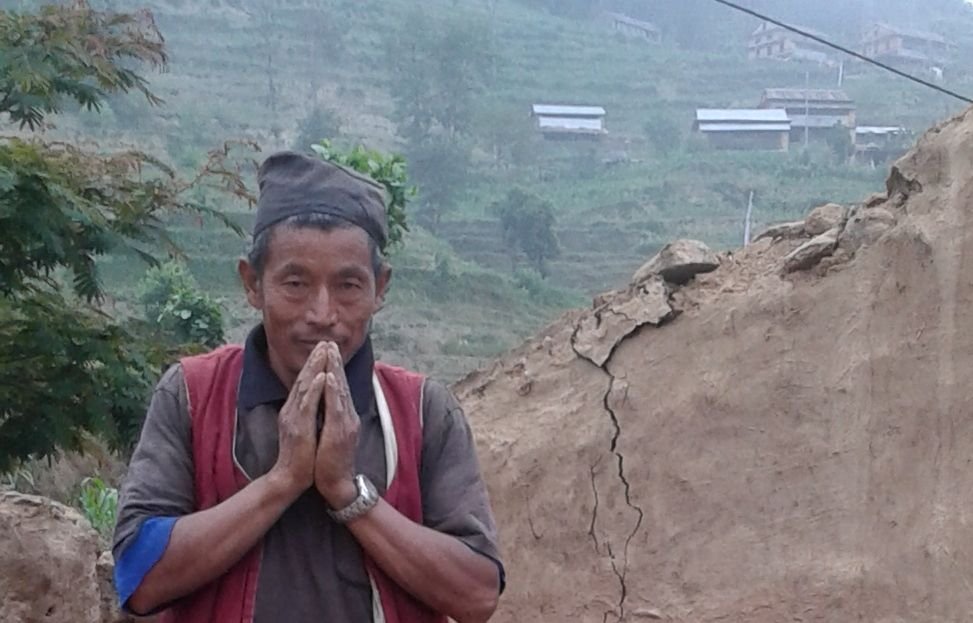 Gyla is 49 years old and he's a survivor of two Nepal earthquakes. Gyla lives with his wife, their 3 children, and 2 grandchilden, in the Arukharka area of Nuwakot district. Gyla's family's stores of rice and lentils were buried in the earthquake rubble. What they were able to retrieve has been contaminated by toxic dust. This means that Gyla's family are suffering from hunger. With your help, we'll provide food aid to help keep Gyla's family healthy and happy.

Nepal has been devastated by two earthquakes in less than three weeks. Survivors have lost loved ones as well as their homes and supplies of food. It is estimated that over 3.5 million people, including Gyla, are going hungry and are in need of food aid. This perpetuates their suffering and could lead to malnutrition, poor health or even starvation.

Your donations will be used to provide food aid, like rice and lentils, for Gyla, his family, and other families in the community of Arukharka. 10 families in Arukharka are in need of food aid until at least September, 2015. This project will provide urgent food aid for one third of the affected individuals until this time.

By providing nutritious, filling food we'll help ease the suffering of Gyla and his family. We'll also help them avoid malnutrition and poor health in the future. The kids in Gyla's family won't go to school hungry which means they'll be able to focus on learning for the future. Receiving food aid will also remind Gyla's family that there is someone who cares.

GlobalGiving
Guarantee
Donate https://www.globalgiving.org/dy/cart/view/gg.html?cmd=addItem&projid=20585&rf=microdata&frequency=ONCE&amount=25
Please Note
WARNING: Javascript is currently disabled or is not available in your browser. GlobalGiving makes extensive use of Javascript and will not function properly with Javascript disabled. Please enable Javascript and refresh this page.