A microproject by ASHTAR for Theatre Productions and Training 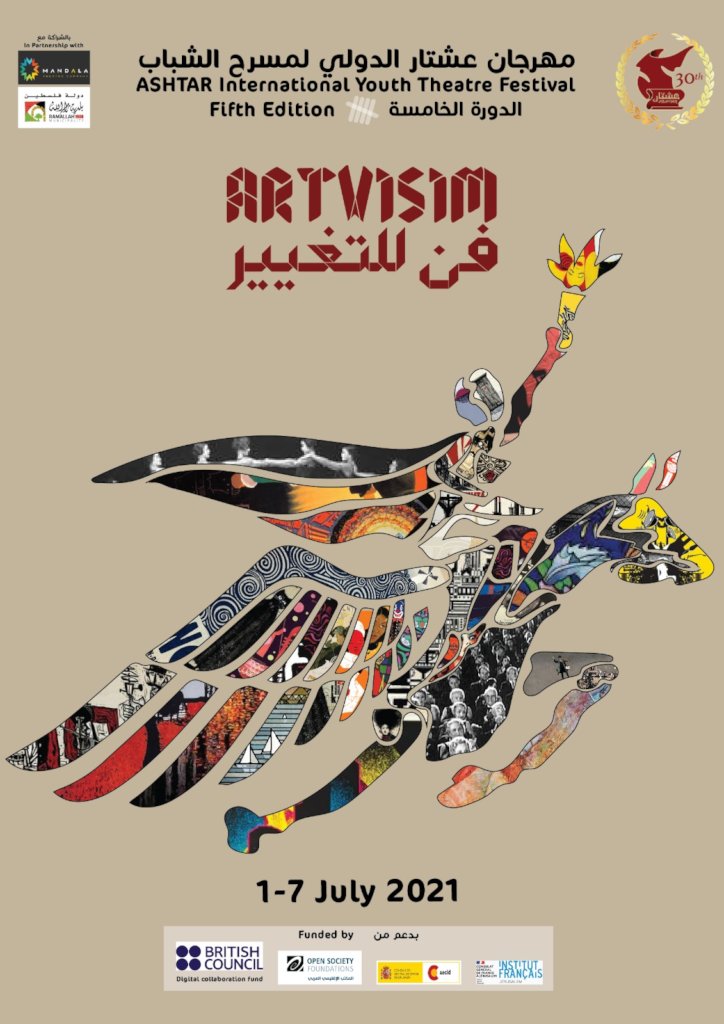 This year ASHTAR conducted the fifth edition of its international youth theatre festival, under the title ARTIVISM, which brought a strong highlight of what is needed in different countries and between different cultures.

After two years pandemic and in the aftermath of many social and political injustice events that are happening around the world ARTIVISM became a necessity to our youth to realize their roles and abilities in making change in their world.

Keeping the above in mind, ASHTAR Theatre invited 15 theatre groups to participate in its festival this year. The groups presented plays by their youth that are related to the theme.

The groups that participated in the festival this year were:

YV Mic – Gaza/Palestine – Where are we going?

Palestine Circus School – Birzeit/Palestine – A letter from the past

After each recorded performance a zoom meeting took place and the audience discussed the play with the performing team (director and actors).

In addition to all these performances; there were two days webinar that took place with the different participants locally and internationally; the four sessions webinars discussed the role of art in making a change in society. The topics of the webinars that brought a group of presenters each session were:

The webinars were attended by 42 students in Ramallah and some about 30 students in Oxford in addition to 10 more online followers.

Besides the webinars, various workshops that took place on daily basis between the 2 – 7 of July, at the Evangelic House in Ramallah from 10:00 am to 2:00 pm. every day. Those workshops were:

Breaking the ice with Khalil Batran attended by 42 students

Creative writing with Hope Azeda from Rwanda attended by 42 students

Theatre of the Oppressed with Edward Muallem attended by 38 students

In addition to a master class on the work of Ahmad Madani from France, attended by 28 students in Ramallah and 30 students in Oxford.

The workshops gathered ASHTAR students and the different youth from the theatre companies who were participating in the festival.

ASHTAR for Theatre Productions and Training

Find another project in Palestine or in Arts and Culture that needs your help.
Find a Project

GlobalGiving
Guarantee
Donate https://www.globalgiving.org/dy/cart/view/gg.html?cmd=addItem&projid=52615&rf=microdata&frequency=ONCE&amount=25
Please Note
WARNING: Javascript is currently disabled or is not available in your browser. GlobalGiving makes extensive use of Javascript and will not function properly with Javascript disabled. Please enable Javascript and refresh this page.