Amara Sabai Kailaspur Nandakumarpur Joutha Sanstha works with communities in a remote location in West Bengal region of India. Villages in this area are surrounded by water, making access between villages and to resources difficult. The Amara team was determined to bridge the divide.

The Amara team knew that the communities they served were restricted from resources, including schools and hospitals, due to their location. But it wasn’t just these resources that the community craved, they were also in need of community interaction. The team shared that due to the water, “access to other part of the world was not only restricted, but villagers on both sides of the river were living as the citizen of two countries.”

The Amara team went to work to bridge the divide. The team explained, “In the initial stage, we convened a meeting of villagers on both sides of the river and discussed a plan to materialize the idea. It was unbelievable that a footbridge over a river was constructed with the help of local people and using exclusively local resources. That was a learning point and innovation for entire Sundarbans area, and similar bridges over the small river were constructed in various places.”

Though the task before them was huge, with community support and participation, the bridge was built. The team shared what they learned from this experience:

“If planning is right, participation of the beneficiaries is ensured, and determination is fixed, then we can solve big problems.”

The bridge allowed the Amara team to continue working on community-led projects. “Based on this experience, we worked for many more projects like ferry improvements, a drainage system excavation, an agricultural programme, a safe motherhood and child survival programme, and so on,” explained the team.

Their commitment to community feedback did not go unnoticed by Nidhi Manchanda, who visited Amara as a member of GlobalGiving Field Program. Nidi said this about her experience: “The organization is definitely an exemplar of a community-led organization. The secretary and other board members are from the community itself, as well as the school teachers.”

Is your organization ready to make a change? Start your Listen, Act, Learn. Repeat. journey today by downloading GlobalGiving’s “How To Become Community-Led Checklist.” If you are already part of GlobalGiving, go to GG Rewards to earn points for sharing what you’ve learned. 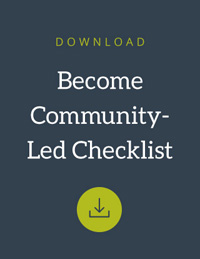 GlobalGiving’s Top 10 list highlights 10 nonprofits (and five honorable mentions) that have demonstrated their commitment to impact through learning. Learn more.

Featured Photo: Quality education for the kids of disadvantaged groups by Amara Sabai Kailaspur Nandakumarpur Joutha Sanstha
Get Free Tips + Tools in Your Inbox
Subscribe to get the best content from the Learn Library in your inbox once per month.
Recommended Tools