STRIDING into Summer in Haiti! 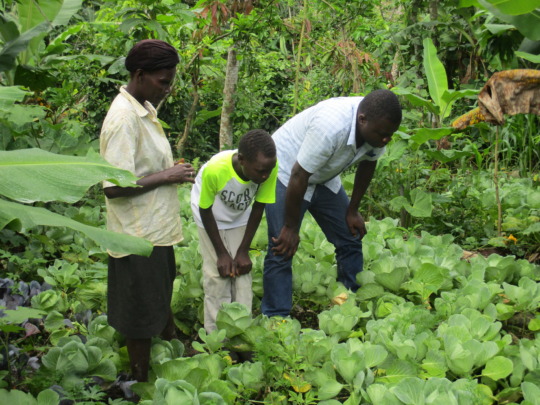 Following the traumatic, devastating affects of Hurricane Matthew in October, where many lost everything - including their homes, health and livelihood - we have been able to forge ahead with new partnerships and new opportunities for community capacity building and rebuilding livelihood options and interests.

LFBS Haitian Doctors continue Outreach Medical Clinics across the southern peninusla. We were able to supply children and families in remote communities not  only with medical consultations, but with the medications as well. With donated seeds and seedlings, and with the assistance of LFBS's Agronomist and youth trainers, crops are in abundance once again (photo) providing food and the opportunity for family livelihood. New small businesses have been supported to youth and their families toward their own self-sufficiency and to be able to supply goods in local communities.  Through partnership, our staff continue to assist with repairs and building new homes - where only rubble stood just months ago! Family members and youth in LFBS programming gaining confidence, skills, self-esteem and compassion through opportunity to join the the work (photo).

Imagine how it must feel for some of these former street boys as they help bring housing supplies up the mountain where we assisted the family of  another youth, reunited with his family two years ago, rebuild their home. These blossuming young men have gone from being in streets, or in corrupt institutions, together to helping build houses for each other's families (photo)!

The summer will also allow some of the youth to attend vocational training and practice their new skills as work on so many projects continues. Cooking classes for youth (photo) - part of lifeskills and confidence bulding - have been ongoing at our Transitional Safehouses (Boy's and Girl's), led by LFBS staff. Youth also participate regularly in preparing supplies for distribution, community trainings and other important tasks as they learn to be responsible team members (photo).

A milestone for one of LFBS youth, Vedette – she will be graduating as a TEACHER from her post-secondary studies on July 9th (photo) ! Morgan first met her in 2010 – when she was one of the children in the corrupt orphanage that became the catalyst for the founding of Little Footprints Big Steps Child Protection Organization! LFBS reunited her with her family in 2012. This incredible next step on her journey toward a future with dignity and self-sufficiency is a tremendous achievement and a motivating example for others that this truly is possible!

Because of YOU, skills, ability and self-esteem can flourish like the new crop growth! The chance for a real future can be within reach of so many, given the opportunity and encouragement! Please share with friends so that they too can be catalysts for true and continued change. 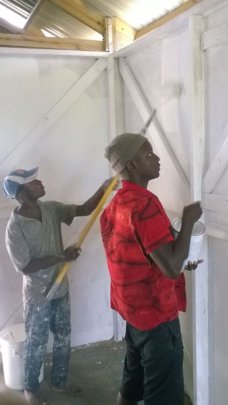 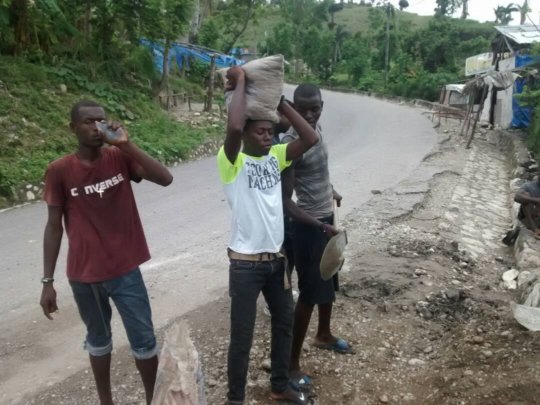 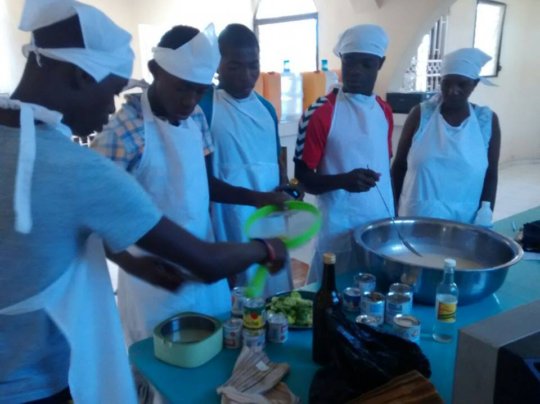 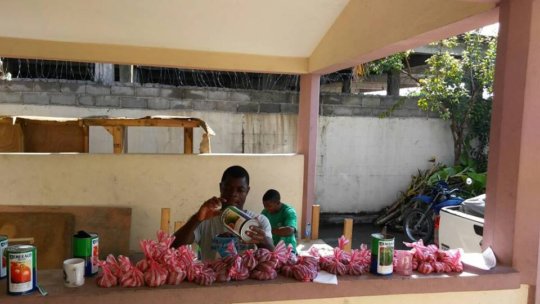 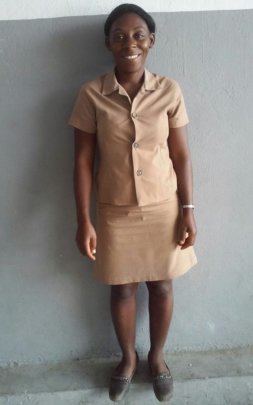 Vedette will graduate as a teacher in July!!

STRIDING into Summertime in Haiti 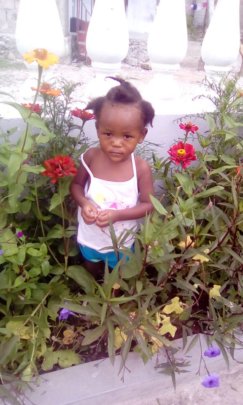 Spring flowers at the Girl's Safehouse

FOLLOWING the traumatic, devastating affects of Hurricane Matthew in October, where many lost everything – including their homes, clothing, school supplies and school buildings - we were able to assist over 300 children to continue their schooling in January! The need was greater than before the Hurricane as many families who were previoulsy able to pay the registration, uniform and supply fees had nothing left and no means of livelihood until they could grow their crops and rebuild their homes. And an especially busy time for Little Footprints Big Steps Child Protection Organization!

AS this school year comes to a close and children finish their yearend exams, they can have the simple joy of knowing that they will be able to continue learning and gaining knowledge and confidence when the new school year begins. Through your support, some of those children will also participate in summer school activities such as music camps, English lessons, art and cultural recreation.

SPRING flowers in full bloom at our Girl’s Transitional Safehouse – but the most beautiful ‘flower’ of all is little Neissa (photo). She was abandoned in December and has filled the house with her sweetness ever since. A milestone for one of LFBS youth, Vedette – she will be graduating as a TEACHER from her post-secondary studies on July 9th –  a photo of that wonderful event will be included in our next report!! One of the Morgan first met her in 2010 and 2011 – when she was one of the children in the corrupt orphanage that became the catalyst for the founding of Little Footprints Big Steps Child Protection Organization! We reunited her with her family in 2012. This incredible next step on her journey toward a future with dignity and self-sufficiency is a tremendous achievement and a motivating example for others that this truly is possible!

EVEN our Safehouse security and healing dog, Sasha, had a special spring event - she gave birth to a litter of puppies on Easter Sunday (photo)! They are a wonderful mix of Great Dane and Bull Mastiff, and will be a new generation to provide love and security to others.

NEW beginnings that you have helped create...in 2015, LFBS found 8 year old Guerna in the paediatric ward of the General Hospital. She sat alone, propping her body up, wincing, tears of pain rolling down her face. Her entire midsection, shoulder and legs were covered in severe, open burns. Her hair was white with malnourishment and her eyes were sunken. When Morgan asked her age, she didn’t know. When her entire body had been burned, it was only her old brother who took her to the hospital and stayed with her. When we found her she was fighting infections as her gaping wounds seeped puss (photo). TODAY, thanks to our dedicated team and her caring sponsor, she's healed incredibly! Her brother has remained at her side and they are living with family friends in Port au Prince. She has had several more surgeries to enable her to lift her arm, increasing mobility. She has such a brilliant smile and is tremendously happy to be able to attend school for the first time (photo)!

FOLLOW-UP to Wubinson, who we introduced you to in our last report: Following Hurricane Matthew in October 2016, people in Southern Haiti became very desperate. Poorly organized aid distributions resulted in chaos as people fought for food and during one incident in November 2016, several children were shot. One of those children was Wubinson. He had left his distant rural community and traveled on his own to Les Cayes, so his parents had no idea where he was or what condition he was in. He laid, alone, for eight days in the general hospital with two bullets in his head and absolutely no medical care – not even painkillers. He hadn’t been fed and was too weak to walk on his own. Local Social Services referred him to LFBS and we quickly transferred him to a hospital in which he had eye surgery to remove one of the bullets.  His family home had been completely destroyed by the hurricane and his mother made a makeshift shelter covered with sheets – she didn’t even have a tarp (photo). Once Wubinson was healthy, he was reunited with his family and began attending school. However, doctors were concerned about Wubinson’s wounds staying clean in such unsanitary living conditions. NOW, we through strategic partnerships and amazing supporters, this family now has a clean, safe home (photo)!

Because of YOU, these children can know a life with their families, with healthcare, safety, education and joy – the chance for a real future! Please share with friends so that they too can be catalysts for true and continued change. 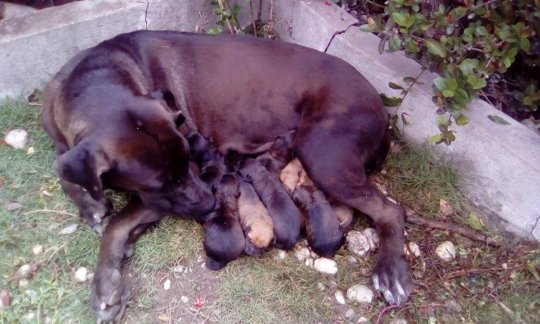 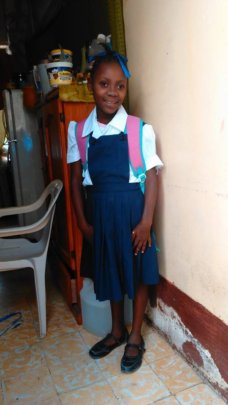 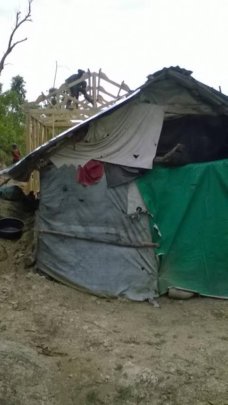 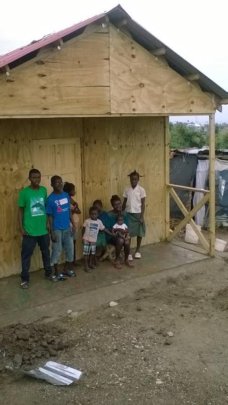 Yes, we CAN Rise to the Challenge! 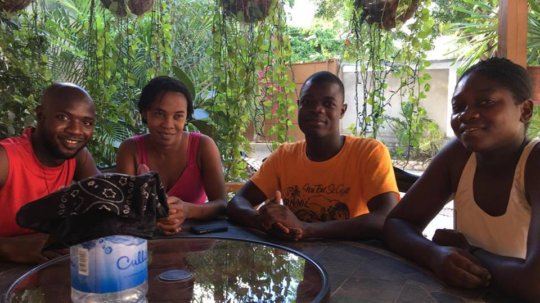 The co-founder and Head of Haiti Operations, Morgan Wienberg, a fitness enthusiast when she gets the chance, recently reflected that “Life is like a workout: When you accept a challenge - try something difficult, or new, or heavier than you're used to handling - that is when you grow. That is when you learn that you're stronger than you thought!” In the short months since the devastation of Hurricane Matthew, the examples of our children, families, staff and communities rising to the challenges are everywhere! New skills are being learned with lots of opportunity to practice, stronger teams and new capacity to achieve is being realized. Homes have, and are, being built and repaired in Hurricane aftermath, led by LFBS staff and workers including the family members as well as LFBS youth as skills training for components of home building. Having a basic shelter is a huge step forward - and being part of the team that makes that happen...priceless! (photos)Other specific training workshops were underway through the past months to build the capacity, confidence and knowledge-base of our staff and partners - and the youth whose leadership and energy is rising quickly! Multi-day training sessions included: Informed Trauma Care training workshops, with UNICEF for training in the identification and referencing protocol for malnourished children, Gender Based Violence with OXFAM(photo). The youth involved in the Ocean Marine Training Institute also attended a special Personal Finance Management workshop. (photo)A special multiday workshop to begin building practical skills toward a possible career as an Esthetician was provided to those currently staying at the Girls Safehouse as well as those young women that have been reunited with their families in the Les Cayes area. Fun and informative for all involved! (photo)Outreach and Advocacy - Medical and Agriculture. Our Outreach Medical team continues to provide consultations and care to children and families in both Les Cayes area and the communities of the southern peninsula. Agriculture training and replanting continues under the expertise of LFBS’s local Agronomists and specially trained Youth Leaders. Replanting crops and trees – all of which were destroyed, during harvest time, in the hurricane, will mean not only food security, but provide opportunity for income as well. Re-establishing crops, nurseries, and grassland is also a critical aspect to support the ecosystem and environmental recovery. (photo)

Even after all of the trauma and loss over the past few months, the chlidren and youth were proud and excited to help spread the message during Karnival – wearing t-shirts bearing the same message and logos of the large banner they carried – joined in the parade down the main streets! "Pwoteje timoun yo se Konstwi yon demen miyo! Protecting children is building a better tomorrow!" (photo)

Many thanks to each and every one of you for the support you have provided to meet the unimaginable challenges, and to not only survive and work toward recovery from October devastation...but to RISE UP! Along with photos, you will find a link below to our Annual Report. YOU helped this to happen <3 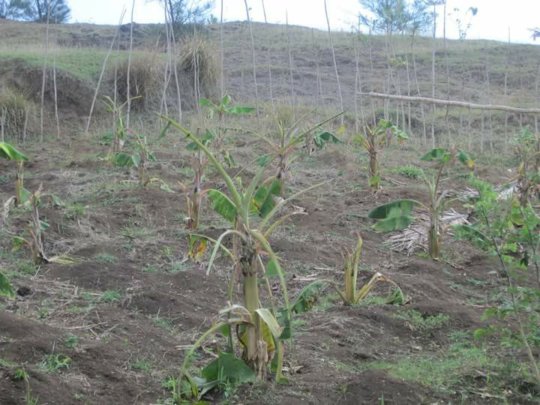 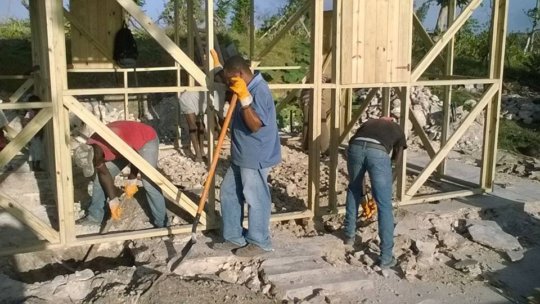 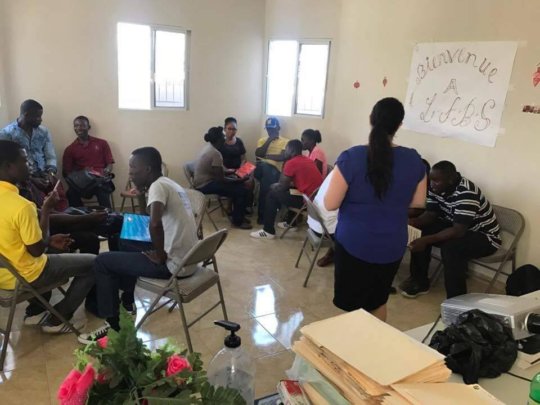 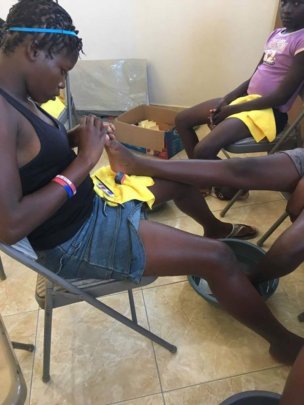 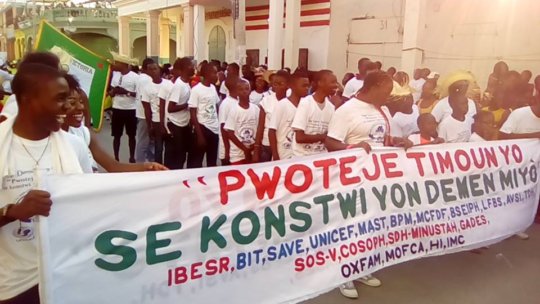