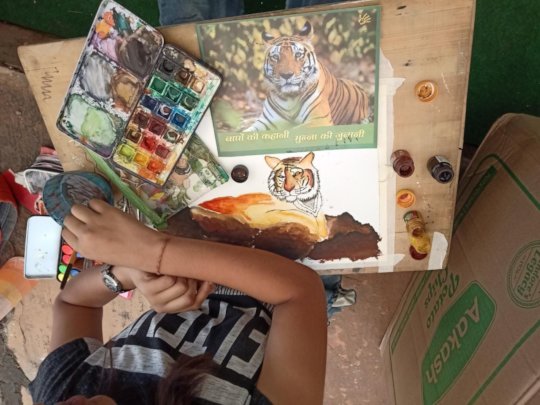 ‘Munna’, the iconic tiger from Kanha Tiger Reserve in the state of Madhya Pradesh reached young children through an illustrated book. Madhya Pradesh Tiger Foundation Society (MPTF) curated a 32-page booklet on the life of a tiger titled “Baghon ki kahani, Munna ki zubani” (The story of tigers as narrated by Munna). The book was a joyride for the children in the age group of 10-12. This handy little edition is full of colored photos and caricatures of tigers in their natural environment. It covers interesting information about the species and its conservation status.

Photos from wildlife photographers, text in the regional language (Hindi), and interesting caricatures of flora and fauna make this attractive to the target audience which is young school children. Munna’s first person account in a style that resonates with children of this age group explains tiger behavior, biology, threats to conservation and tiger corridors.

WTI has been working in the Vidarbha landscape in Madhya Pradesh to ensure connectivity of tiger habitats. We have trained and equipped frontline forest staff across India to ensure protection of the species. Anti-snare walks, anti-poaching initiatives, ex gratia assurance to forest staff and working with communities in tiger landscapes are some of the key strategies implemented by WTI for holistic conservation.

We would like to thank you for supporting our project and such wonderful initiatives. With your support, we hope to continue the good work. We will keep sending similar updates to you. Until then, stay safe and take care. 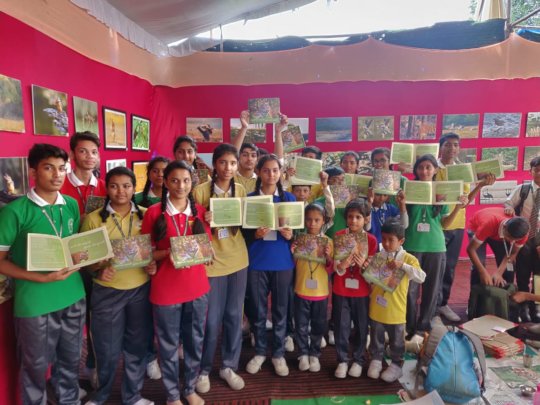 As the saying goes- “Take what you need and leave the rest”.

Today’s updates for the project are from the mangrove forests of West Bengal – called ‘the Sundarbans’. Wildlife Trust of India (WTI) along with a local organisation (Lokmata Rani Rashmoni Mission; LRRM) convinced and supported the fishing community from 3 islands of the Sundarbans– ‘Gosaba’, ‘Satjelia’ and ‘Bali’ – to release their by-catch back into the estuarine mangrove waters.

The released by-catch comprised nearly 92,000 prawn-associated fauna in the reporting period! Several species of fish, squids, snails, snakes and crabs that would have otherwise perished as by-catch were rescued and put back into the waters. All it needed was a simple solution. We provided aluminum containers to the collectors and convinced them to segregate the seeds and adults of their species of interest from the other species, at the source.

Fishing is the mainstay occupation of the locals residing around the Sundarbans. Commercial collection of fish seeds and adults of Tiger Prawns (Panaeus monodon) or ‘Bogda’ (local name) is most prevalent. However, excessive use of drag nets and fine-meshed bag nets results in capture of several other species as by-catch which are not needed by the fishers and eventually dumped off. The fishing activity is mostly dominated by women who spend nearly five hours in water every day for a sufficient catch.

We initiated a cost-effective and straightforward approach which prevented the fisherwomen from throwing away the by-catch. 60 prawn collectors from the three islands were provided with aluminium buckets to help pick out the Tiger prawn seeds and collect the other associated macro fauna separately. Once segregated at the point of collection, the Tiger prawn seed collectors released back the other species.

The team is monitoring the seed collectors to ensure the release of by-catch. We are also collecting data on the number of associated fauna per Tiger prawn seed obtained. On an average, at least eighty other macro fauna are caught for every Tiger prawn collected! This amounts to around 3, 72, 232 by-catch of macro fauna every year, that will now be rescued and released alive.

The project is still ongoing and we hope this simple initiative will find more participation to help save the marine fauna of the Sundarbans.

All this would not have been possible without your generous support. We will keep sending you more updates on similar initiatives. Till then, take care and stay safe.

Help save elephants in India 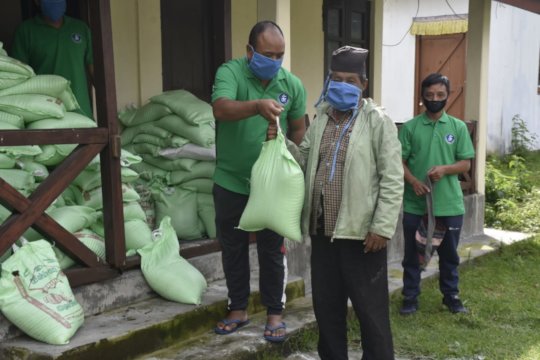 “Hope is important because it can make the present moment less difficult to bear. If we believe that tomorrow will be better, we can bear a hardship today.”

Today’s updates are on hope and resilience – how they keep us going in the face of adversity.

The world is battling the COVID 19 pandemic and we are all in this together. We are grateful that your generous support for our work never ceased despite the difficult times. And neither did our teams stop working.

Conserving Asian elephants and their habitat is one of the priorities for our organisation. We are honoured to share this responsibility with generous donors such as yourself, the communities dwelling around protected areas, the forest departments of various states, frontline forest staff, our network of local conservation organisations and individuals amongst others.

The pandemic crippled the world with nations getting locked down and caught us all off guard. Our stakeholders- especially the local communities living around protected areas and the frontline forest staff (which includes the daily wagers, casual labourers and the temporary staff in addition to the permanent Forest Department staff members) – were severely affected. A disrupted supply chain worsened by their remote habitation resulted in poor access to even basic necessities like food grains and sanitization facilities.

Our teams however reached out to these communities, in and around our project sites. So far we have provided ration and safety gears (facemasks, gloves, and sanitisers) to over 800 frontline forest staff and nearly 6000 forest fringe dwelling community members living close to elephant and other wildlife habitats.

Wildlife Trust of India has been working with these communities and rangers for over two decades, and we understand their role as Guardians of the Wild. Their role in elephant conservation (along with protecting other species) is indispensable. While they are the frontrunners of conservation, we continue to stand by them as they help keep wildlife #Foreverwild.

We are hopeful that things will be better soon. Till then, stay safe!

Ration distribution
‹ 1 ... 6 7 8 9 10 11 12 13 ... 60 ›
WARNING: Javascript is currently disabled or is not available in your browser. GlobalGiving makes extensive use of Javascript and will not function properly with Javascript disabled. Please enable Javascript and refresh this page.