When Mani was first transferred to IMHC (Institute of Mentally Handicapped Children) from another State-run Home, he came with "warning labels." Supervisors and U&I staff at IMHC were told that they'd better be careful because Mani was aggressive.

With his large frame and propensity for quick, angry outbursts, no one wanted Mani in their Home.

His speaking skills were limited to one or two words when he first came to IMHC, recalls Jay, U&I's Manager at the Home. He would sit sullen and angry, not bothering to speak to the other residents. In fact, everyone knew to keep a safe distance from Mani, especially when he lashed out in anger.

Yet, Jay, our manager knew that underneath the big, aggressive frame was a simple, child-like mind that just needed patience and love.

When Jay first invited him to start gardening, Mani agreed. Surprisingly, he followed instructions perfectly. He would water the plants or help with weeding, just as Jay asked him.

Next came the mat-making classes. For the first few days, Mani acted like he didn't care. He lay listlessly on the floor while the other boys worked on their vocational skills project. But, suddenly, Mani expressed his desire to learn.

"I was very surprised. Within half a day Mani picked up the skill," reports Jay. He now comes up to Jay and tries to engage in conversation. Sometimes it's words, sometimes, it's just gestures. But each time Jay knows how important it is to respond.

With his newly discovered skills and his ability to express himself better, Mani no longer comes with a warning label. Instead, he's a young man passionate about gardening, interested in mat-making and learning new skills and even someone who is now helping his friends at the Home learn these skills.

Thank you for donating to help young men like Mani. You're changing lives. Please do continue to support U&I so we can continue to reach out to those with special needs. 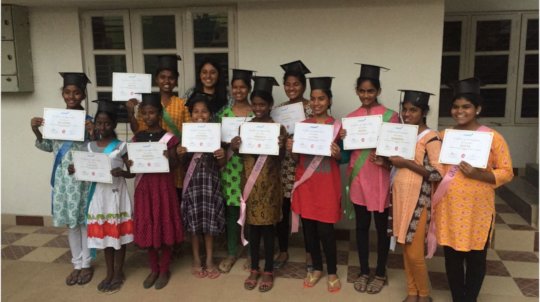 The slide show on Karnataka’s transportation was impressive. It included images and graphics that flowed seamlessly and a perfect English presentation that went along with it. But what was distinctive about this presentation was that the team behind it a group of young girls from an orphanage in Bangalore.

Thanks to 6-month computer course, these girls from U&I’s Learning Center, have some serious Power Point chops. The course, taught by U&I volunteers, covered MS Word, Excel and Power Point. As part of their graduation the girls got to present their final project to a panel of guests.

They were then awarded certificates of completion. And, of course, graduation hats which they got to throw up in the air much to their delight!

It was a proud moment for them - and for us at U&I. These girls now have the skills and the confidence to face some of the challenges that come their way. We've shown them that with hard work, you can dream big. They've shown us that although life circumstances may not be ideal, they can still "Excel" at what they do.

Better Than Any Award! 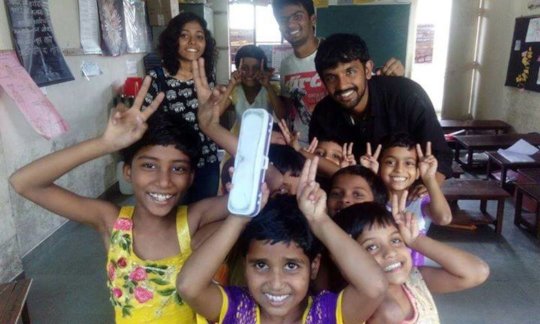 It was Teachers' Day - a day when schools across India celebrate and recognize the efforts of those who have tirelessly invested in their lives through education.

At our Learning Center in Bangalore, seven-year-old Nandhini was excited. She had made a poster for her U&I teacher. It said, "You are my favorite teacher. Happy Teachers' Day!"

She waited eagerly for her tutor, Sunethra, to come to class. But as Sunethra was running late, Nandhini was assigned to another teacher.

Finally, Sunethra walked in through the doors of the Learning Center. Nandhini jumped out of her seat, ran up to her, wrapped her up in a big hug and gave her the poster she had made.

It was a special moment. Sunethra, an architect by profession, usually carefree and casual, couldn't help but choke up with emotion.

At the debrief with the U&I leaders after class, Sunethra shared that never before had she been celebrated or recognized in such a genuine and poignant way.

"It really makes me put my faith in what  I do with these kids," she said, committing to work even harder to give every opportunity for the next generation to succeed.

At U&I, we realize it's a two-way street: those who give are rewarded in ways they can't ever put a price on. We're thankful to our 1200 volunteers who reach out to 1500 children through the week, ensuring that they have the resources and the attention they need to live to their fullest potential.

‹ 1 ... 7 8 9 10 11 12 13 14 ... 39 ›
WARNING: Javascript is currently disabled or is not available in your browser. GlobalGiving makes extensive use of Javascript and will not function properly with Javascript disabled. Please enable Javascript and refresh this page.